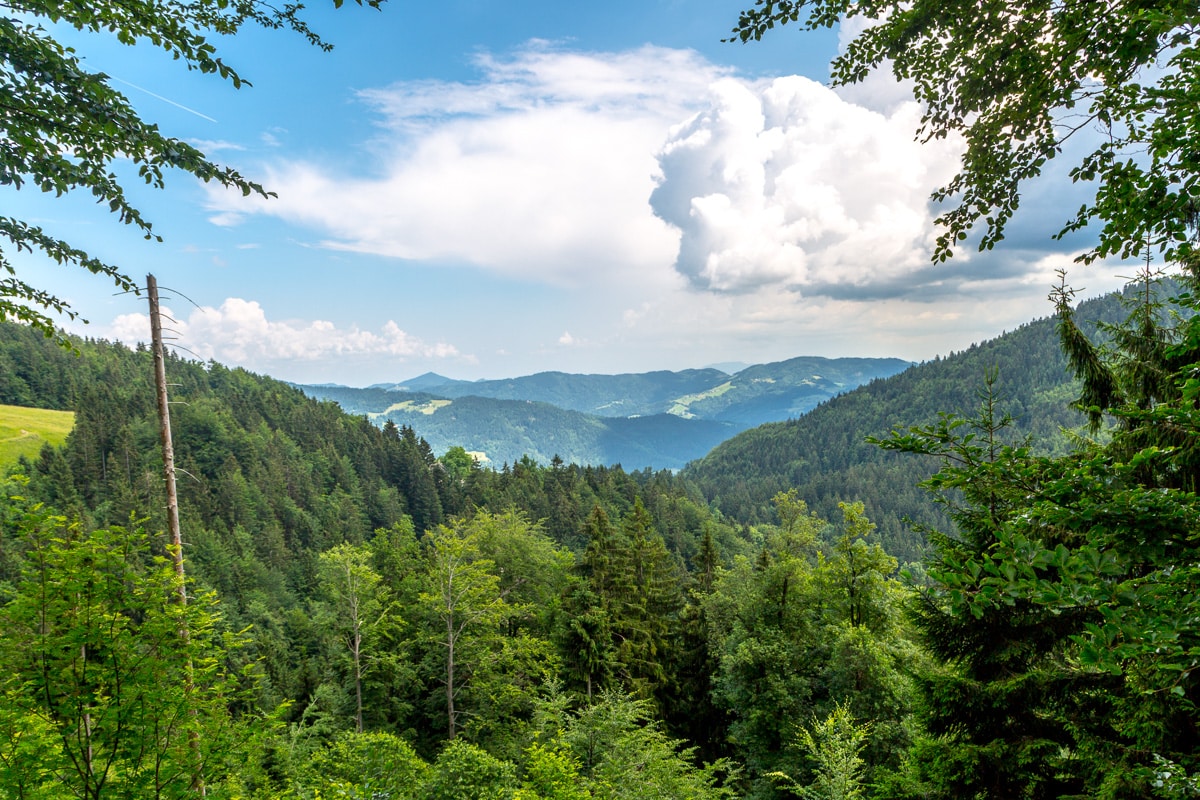 We awoke to sunlight peeking over the distant hilltops through our open window. Though it was a bit early, only just after 05:00, we had slept well and enjoyed the cheerful songs of birds in the meadows that accompanied the bright morning. Today was to be our first hike into the beautiful, green hills of Slovenia. Jeannie was now feeling better, after having been rather ill for a few days. We joined Paul and Janet, our fellow hikers, for a delicious breakfast at 08:30. 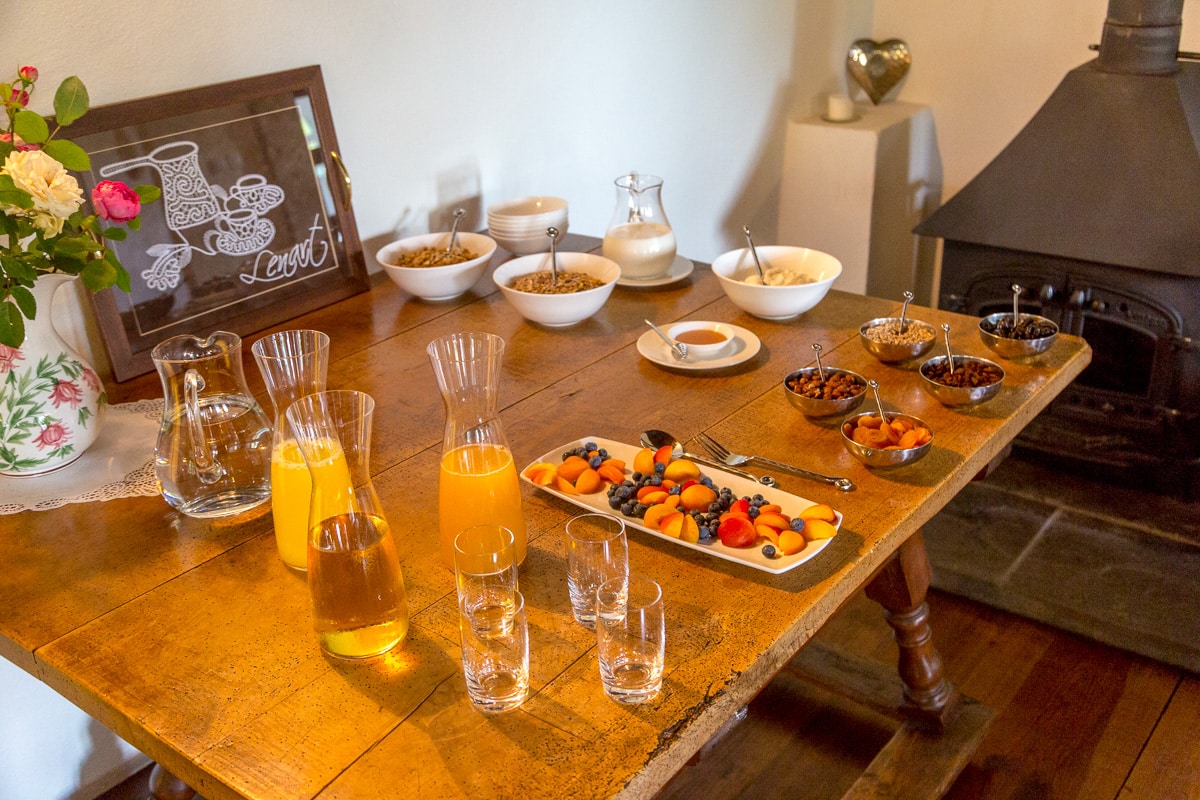 Jeannie ate light, cautiously opting for some yogurt and toast, while the rest of us enjoyed coffee, eggs and bacon. She decided she could begin the walk after being told by Luka that there were two places that our guide, Urska, could call him to pick her up if she was feeling the need.

After collecting our prepared lunches – sandwiches, energy bars, chocolate bars, apples and bananas, and our water bottles, we met our guide Urska, an energetic, friendly young woman who proved to be knowledgeable and patient. Shoes on, backpacks loaded (rain jackets stowed in case), we grabbed our hiking poles and took off. After just a few steps we begin to walk uphill. This is the description of the day’s hike from the Walk Slovenia website:

A pretty and fairly gentle start to the week with this walk leaving directly from the hotel. We climb through the village to enjoy the panorama from the upland meadows, and then visit the ancient church at Gora, with lovely views over the rolling hills and valleys. We then descend to the village of Malenski Vrh enjoying long reaching views to the south of Slovenia, walking on tracks through meadows with many interesting and unusual flowers. After a visit to an open door farm where we can taste homemade cordials and juices, we walk home on a circular route on tracks passing a waterfall and through woods with many interesting mushrooms in season. 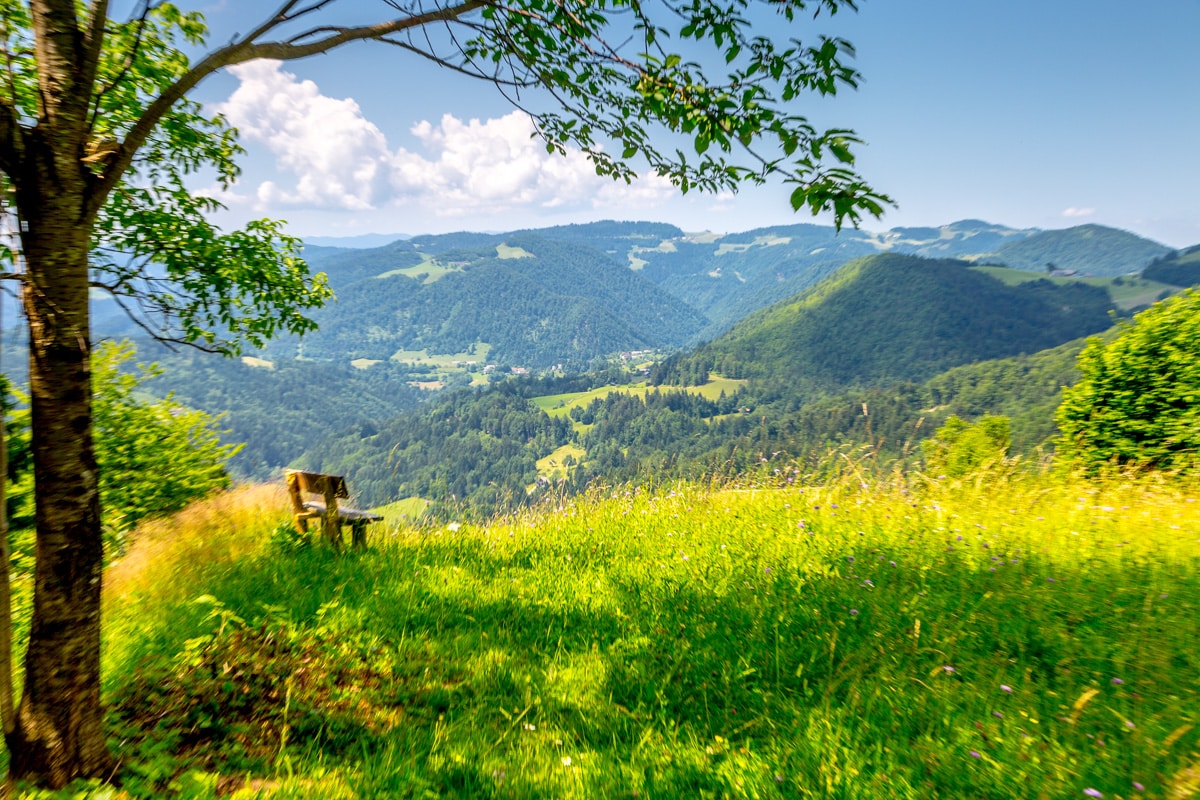 The conditions were perfect for a long hike. A beautiful blue sky with occasional puffy clouds and temperatures that began delightfully cool. The trails were good, but might have been a little difficult to navigate without our charming guide.

Jeannie was feeling fine at the first rest stop, but with the climbs and rising temperature along the second stretch, she decided to ask for Luka to pick her up at the lunch stop. She probably could have made the rest of the walk, but would be drained and this might have impacted the next day’s hikes. It was a good choice as we discovered the next long climb came immediately after lunch. 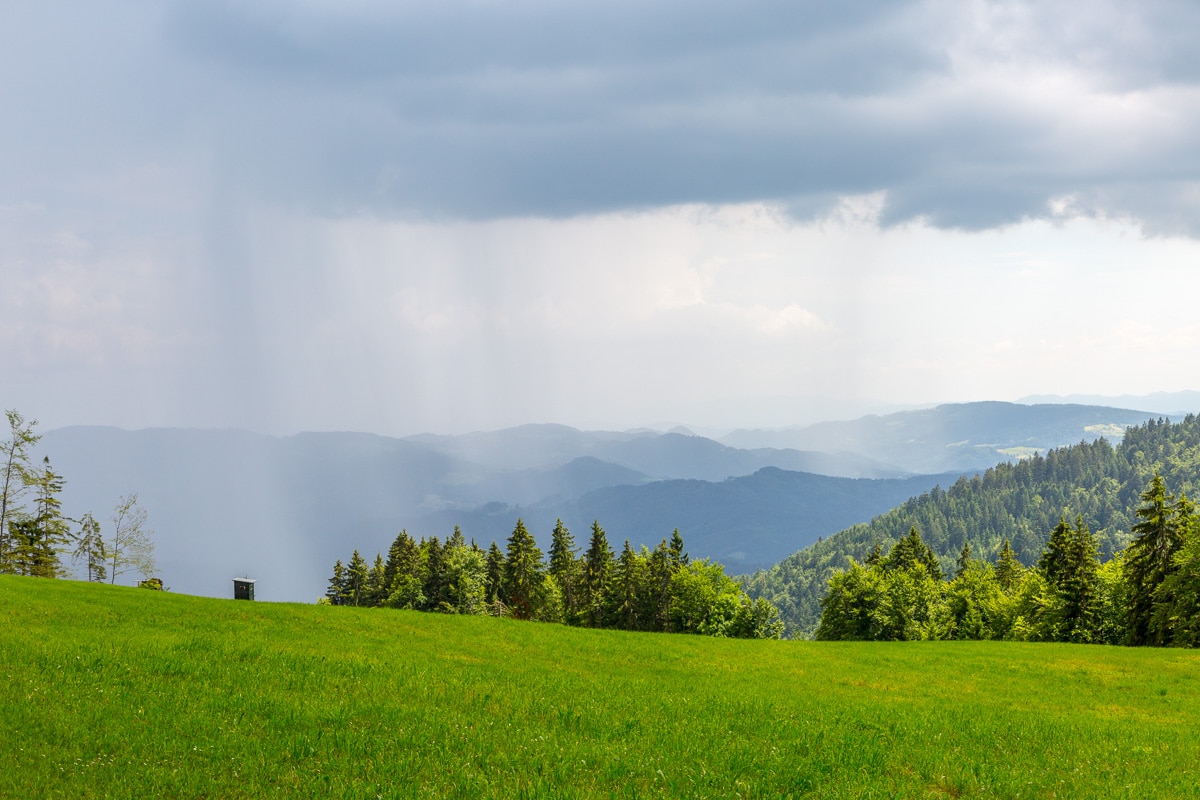 On returning to the hotel, Jeannie showered and decided to take a nap. But before drifting off, a soft rain began and became louder, then came some odd noises … hail!! She worried about Chris and the others out walking in these conditions, but unbeknownst to her, we were already safely on the porch, and dry. After recording some of the hail on her phone, she fell soundly asleep.

After sleeping long enough, Jeannie woke up refreshed, though she had missed tea/coffee and blueberry cake that the rest of us had enjoyed.  Chris came up to shower and then we took the computers to the porch to do some writing and enjoyed the clean air and afternoon birdsongs. 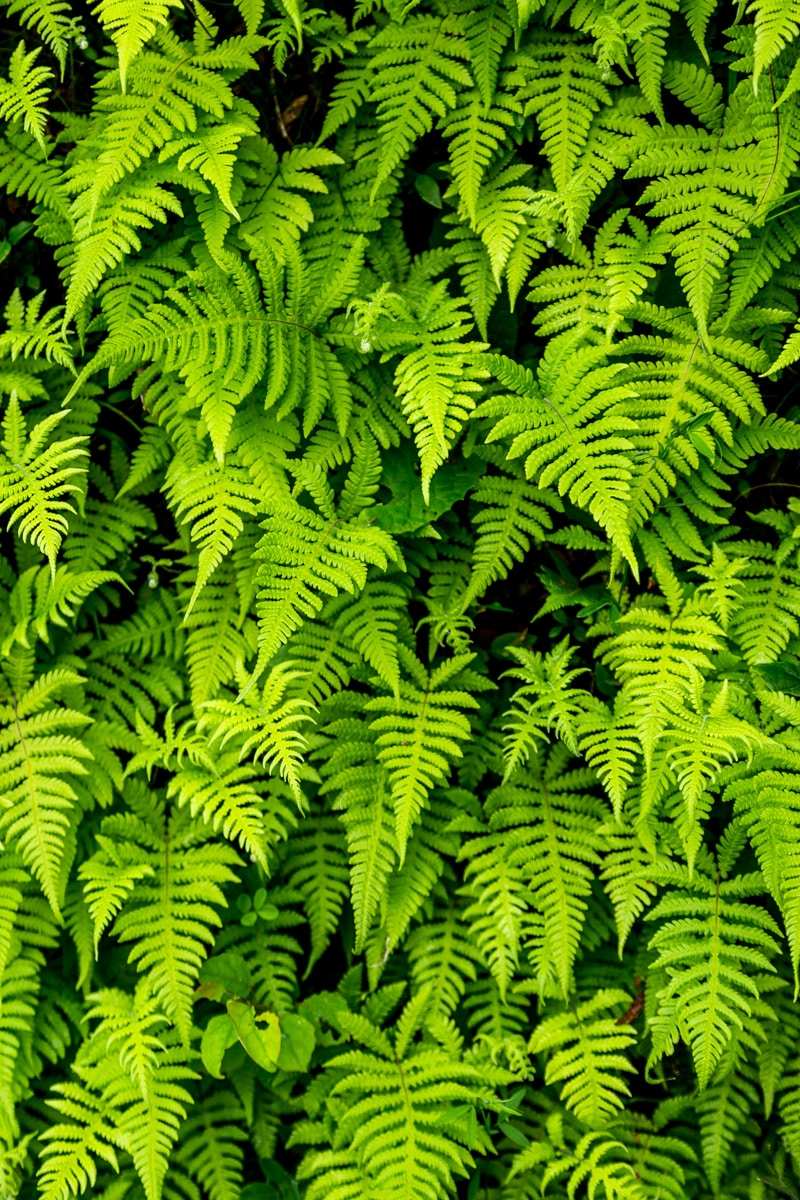 A bit later, around 19:00, Janet and Paul joined us on the porch. Luka came out and took drink orders, we decided on a glass of prosecco. Two excellent canapes were served, though we can’t remember what they were. Presently, we were called into the house for dinner. Wild garlic soup was the first course, Delicious and a bright, dark green. Zana told us the leaves are harvested before it flowers, and they keep well in the freezer, making it a good option since it is not available at other times of the year.

Dinner consisted of chicken breast, with a sage leaves, wrapped in prosciutto. Yummy. Potatoes that had been thinly sliced, boiled, were layered with a luscious cream sauce, then when cooking was complete, topped with parmesan. Our side dish was local, whole cooked-carrots, sweet and delicious. Everything was accompanied by a platter with extra servings of each item, and almost everything was eaten.

Dessert came on a plate with two small dishes. One dish contained raspberries with two chocolate truffles – one white and one dark chocolate, while the other dish held a scoop of raspberry gelato. Oh, and the night’s schnapps was raspberry. 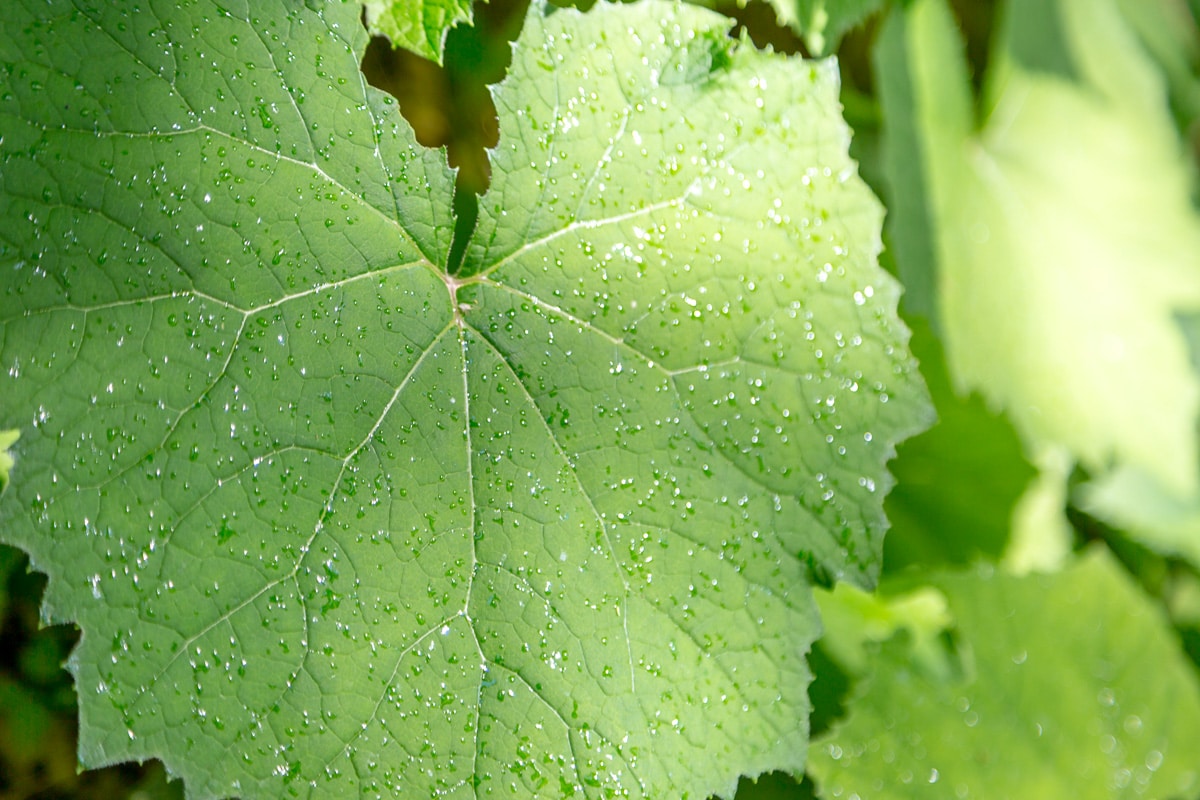 Luka and Zana joined us and after a brief description of the next day’s plan – a challenging walk, then a visit to Lake Bled! We had a lengthy conversation about the history of Slovenia’s independence. Zana told about border crossing at the end of Slovenia’s 10-day war and the beginning of Croatia’s longer battles. She is from Serbia, a nationality generally not well regarded by Slovenes. However, she speaks the local language (and English) very well and has integrated successfully.

By 22:30 our eyelids were heavy and we went upstairs. Tomorrow begins a bit earlier at 08:00 since we’ll have a drive at the beginning. The cool evening breeze and the sounds of crickets lulled us to sleep quickly. 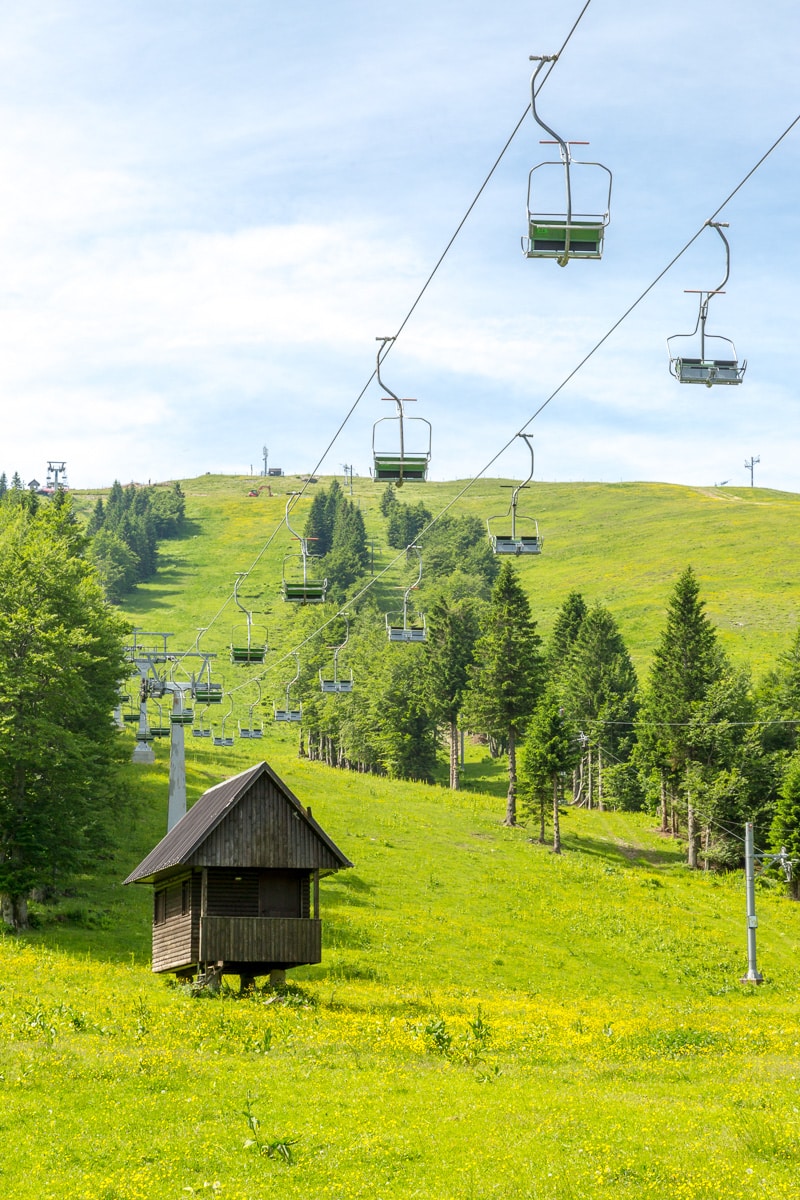 Breakfast started at 08:00 since we would drive to the start of today’s walk. The ride took about an hour and we stopped at the base of the ski lift at Soriška planina. Out of the van, packs on, and poles in hand we were quickly walking up a long and steep path. We took regular breaks to catch our breath and admire the view.

Along the way we spotted many new wildflowers. Such colors in large patches of diverse species that got more beautiful as we went. We finally reached the top of this climb, and the path became more gentle, though very narrow up on the ridge. The flowers continued in their variety and beauty, and the views became more spectacular. 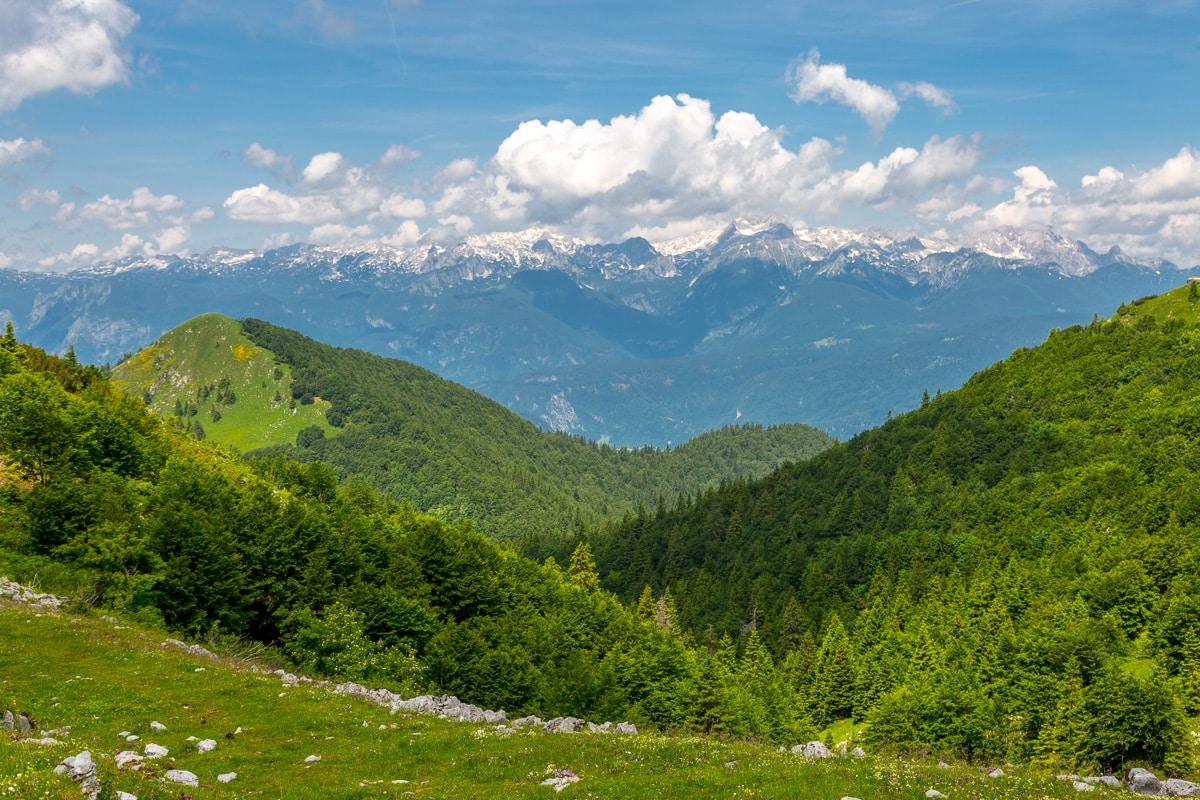 The good weather held and the Julian Alps still displayed vast patches of snow in the distance. Among the rugged mountains and clouds, we could see Mount Triglav, Slovenia’s highest peak at 2,863.65 meters or 9,396 feet. We had seen pictures of this beautiful country on the internet and were impressed, but it was so much more stunning in person. 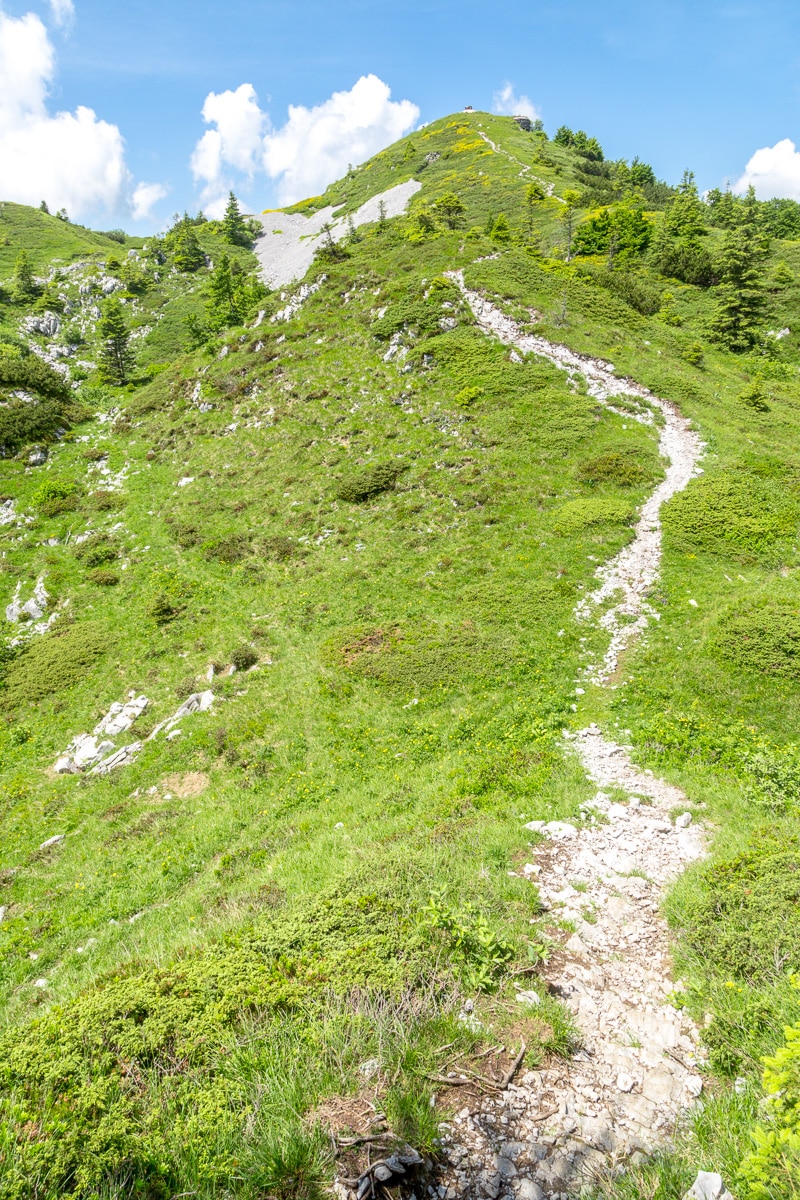 We took a lunch break at an old pre-WWII bunker at Možic (1603m or 5259 ft), one of many in the area that we saw. Built between WWI and WWII, it never saw combat. Luka took us inside the cramped structure. It was a bit tricky walking, with very wet, narrow, slippery steps and minimal light from his headlamp. But we all make it in and back out safely.

After lunch the descent began. It was very steep in sections with many loose rocks, and we had to be very careful. After an hour or so, we were back at the van (and a bathroom!), and we discussed the plan for another steep walk to a view of Lake Bled, which would be later rewarded a slice of kremna rezina, the famous Lake Bled cream cake. 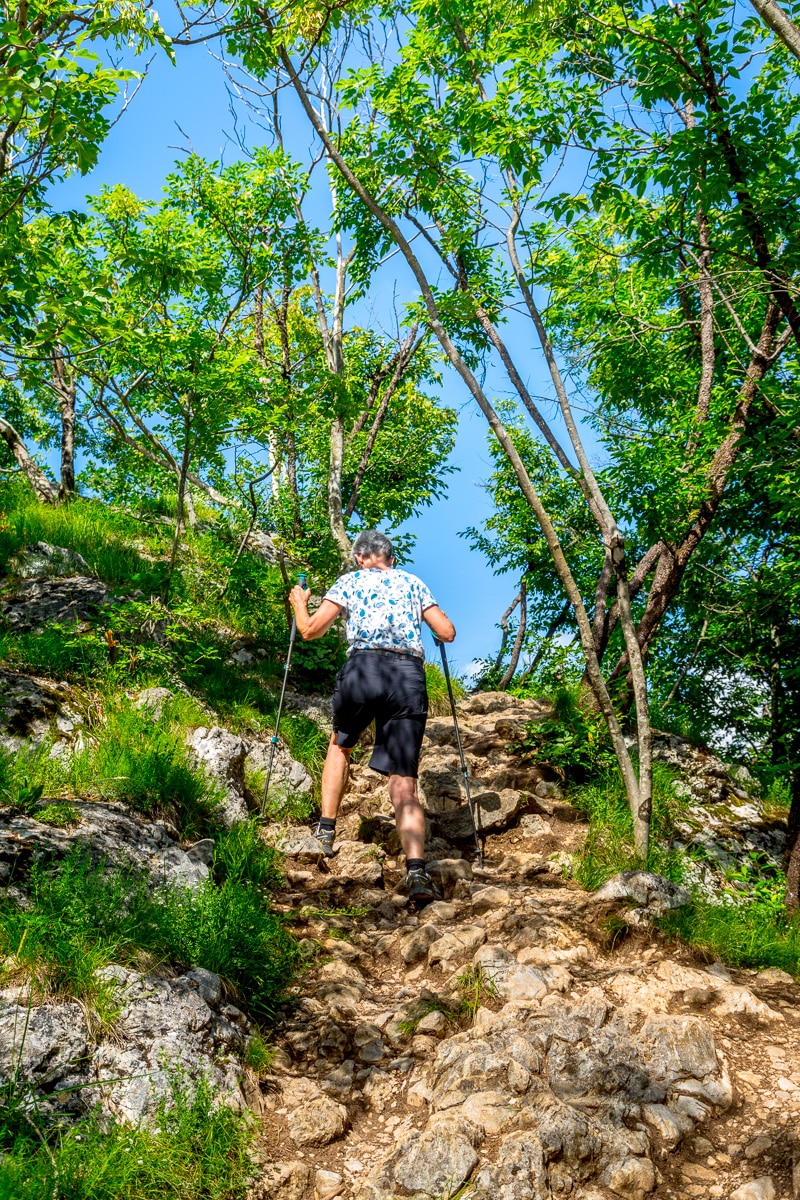 We arrived in Bled after about 40 minutes, and were able to find parking on this busy summer day.  After collecting our poles and water we took off for another climb. It would not be easy but we were all game to do it for a magnificent view of the lake. Up and up again, steeper and rockier. We reached the top and found an empty bench where we rested, enjoyed the view and made many pictures. The lake is quite large, clear, with a beautiful color, and a famous church on an island in the center.

Soon we were joined by other view seekers so we made our way back down. We made note that all the younger people walking to the top, were also breathing heavily from the climb. After descending, we then walked the path along the lake back to the van. While the others collected towels and swimsuits, Jeannie got her sandals and we walked back to the lake (Chris changed in the van, like old cycling days, while Janet and Paul went to the WC to change). 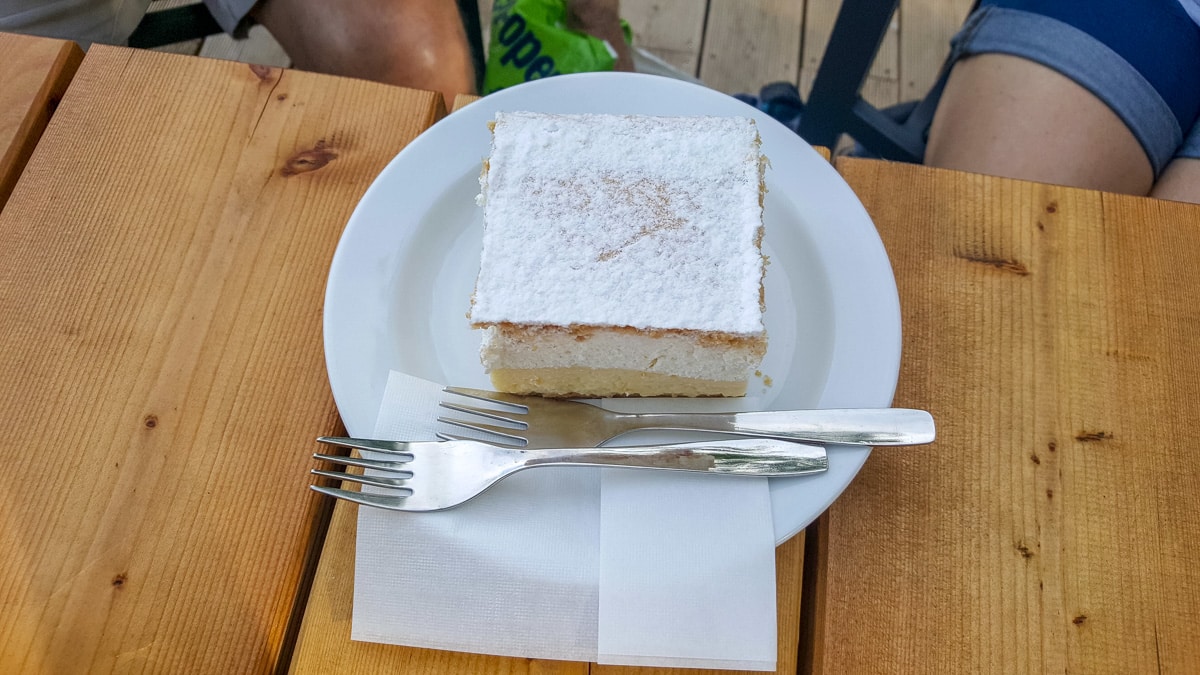 Chris swam in the refreshing cool lake and Jeannie, sitting on the dock, simply dangled her feet in the water, while and Paul and Janet swam further along the rocky beach. Eventually we went up to the café and found Luka. We ordered a slice of the famous Lake Bled cream cake. It was a very large piece that we split. Soon, Paul and Janet joined us and ordered a slice to share as well. Tired and satisfied, Luka drove us back to the inn. 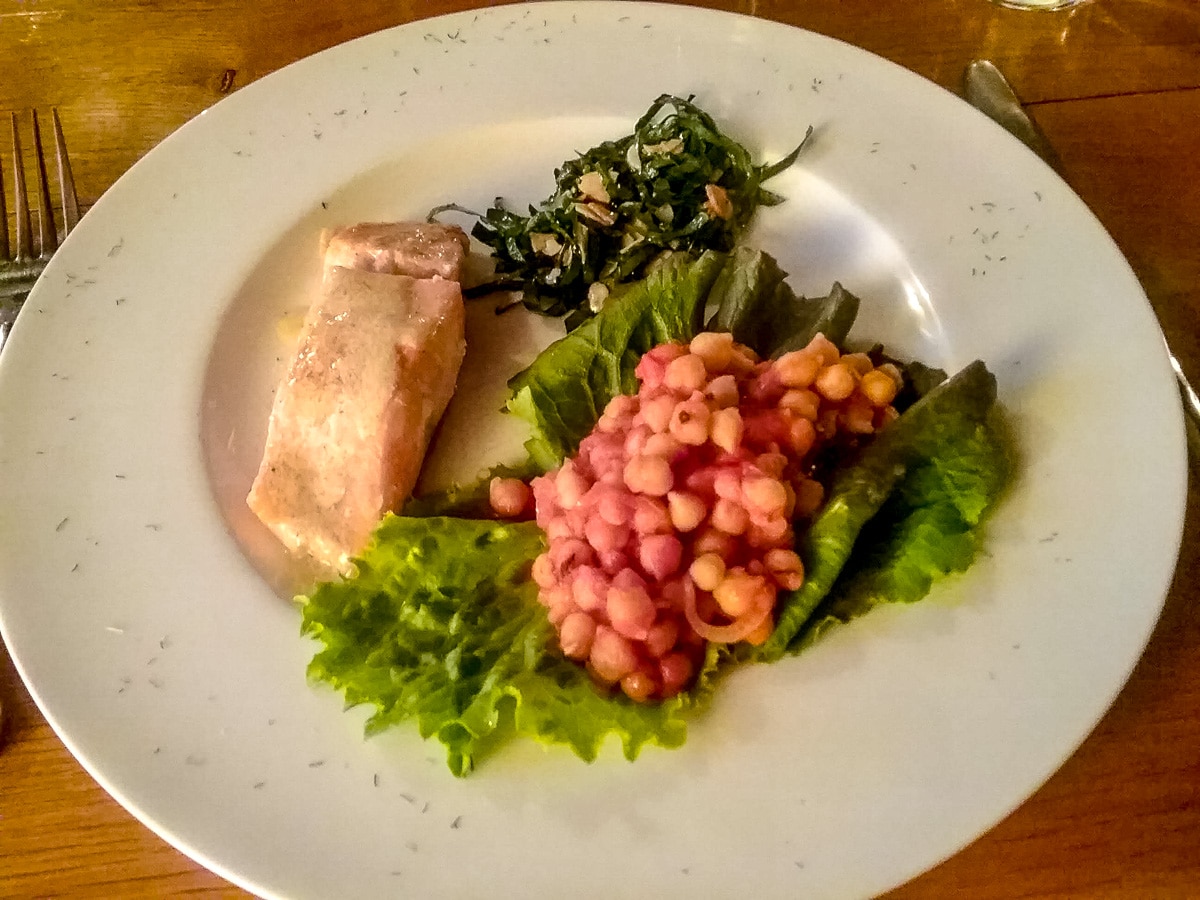 It was quite late by the time we arrived, about 19:10 so we quickly took showers and made straightaway downstairs for dinner. It was another evening of delicious aperitifs and canapes, then a first course of ravioli followed by a dinner of salmon with beurre blanc sauce, broccoli leaf salad with almonds, and seasoned chickpeas. As if that wasn’t enough, we were treated with a dessert of crème brulee and capped with the schnapps-of-the-night.

Luka and Zana again joined us after dinner to discuss the next day’s walking options. We decided to endure more climbing to get to Blegos Mountain for the views.  After a challenging day of climbing, sleep came easy for us all.