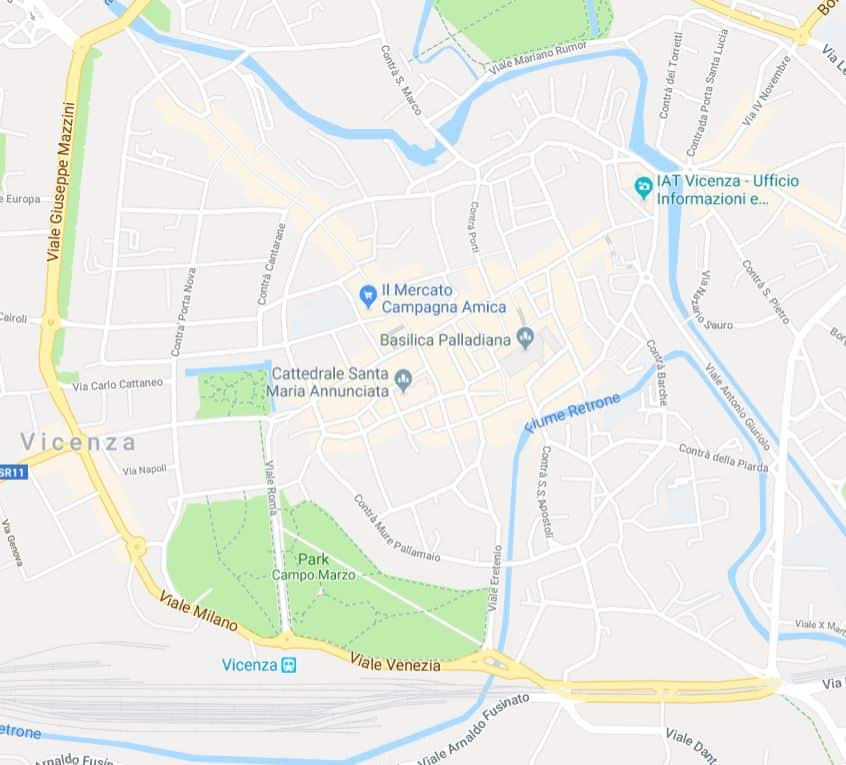 Jeannie pores over the train schedules, studying times, distances, and costs, while I work on photos and the next blog post trying not to get too distracted. “So, let’s go to Vicenza this Saturday,” she says. Without looking up, I reply “OK.” Then it dawns on me how that sounds.

Being in one place for extended periods allows us to go on rather unplanned, spur-of-the-moment jaunts, and the availability of the trains from Verona in several directions gives us a number of options.

It’s the idea that we can just decide to take the time to go to a different Italian city, at a moment’s notice, without driving, for just a 4-6 hour visit, still boggles my mind. Next week, we will take the train (about 20$ each, round-trip) to Venice … for lunch. 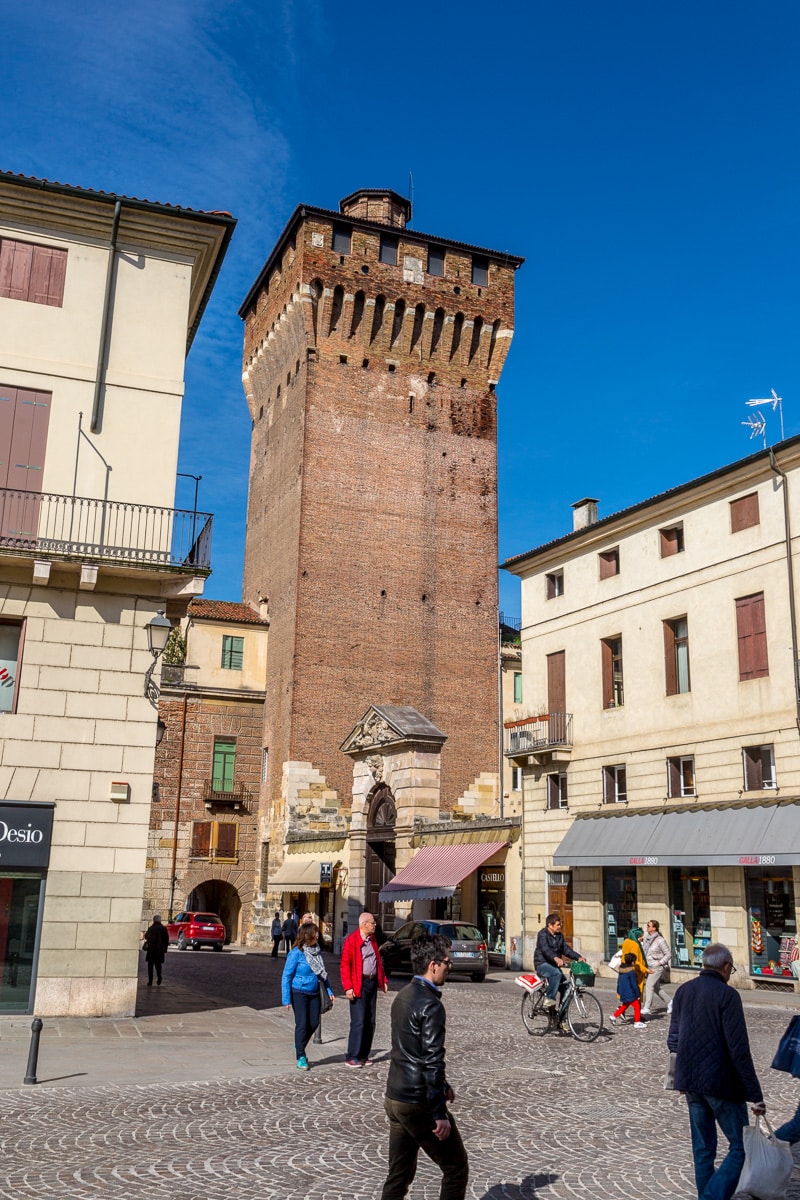 But this day, we are going to Vicenza (vee-CHEN-zuh). It is only about 60 K (37 mi) from Verona, and our train station here is only about a 15-minute walk away from our apartment, so to just pop over to a different town for the day is easy. It is also a pleasure not to have to drive, but the real benefit is in not having to find a place to park.

The walk into the city began through a park where the trees were just beginning to fill in with the bright green color of spring. The sidewalks were busy with people going into town to shop or sight-see. There was a Spring Garden Market in the Piazza dei Signori, the main square, and the caffés were teeming with business as people were enjoying their morning espresso or drinks. 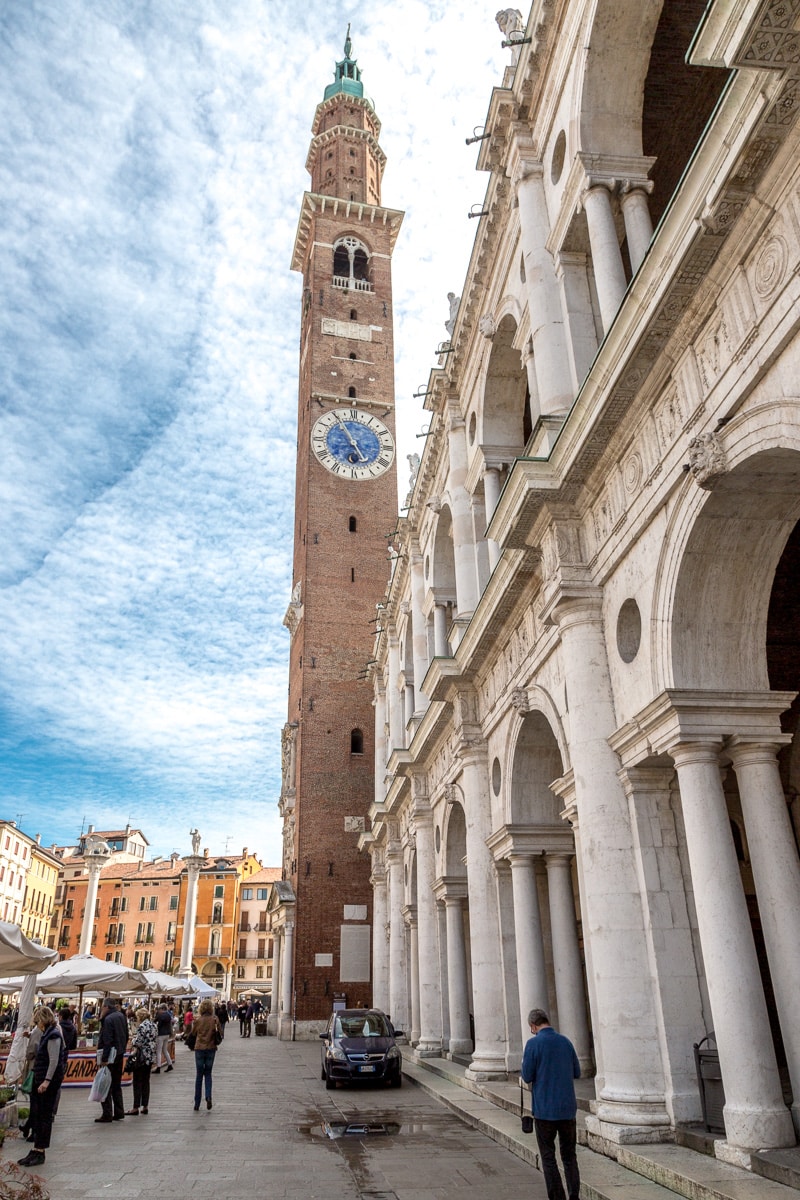 Vicenza is a very old city. It appears for the first time in ancient records in 135 BC, though its history extends much further back.  It became part of the Roman Empire in 157 BC, known as Vicetia or Vincentia. The Hungarians destroyed the city in 889, and in 1001 it became the seat of a bishop. In 1404 it became part of the Republic of Venice for several centuries. During the early 19th century, Vicenza came under Napoleonic rule. After the fall of Napoleon the city was taken by Austria, but in 1848 the citizens rebelled against the Austrian government and in 1866 it finally became part of the Kingdom of Italy.

Vicenza, and the region of the Veneto, was the location of major combat in both World War I (on the Asiago plateau) and World War II when it was the most damaged city in the area by Allied bombings. After the war, the entire region suffered a period of depression from the devastation but beginning in the 1960s witnessed a strong economic development. 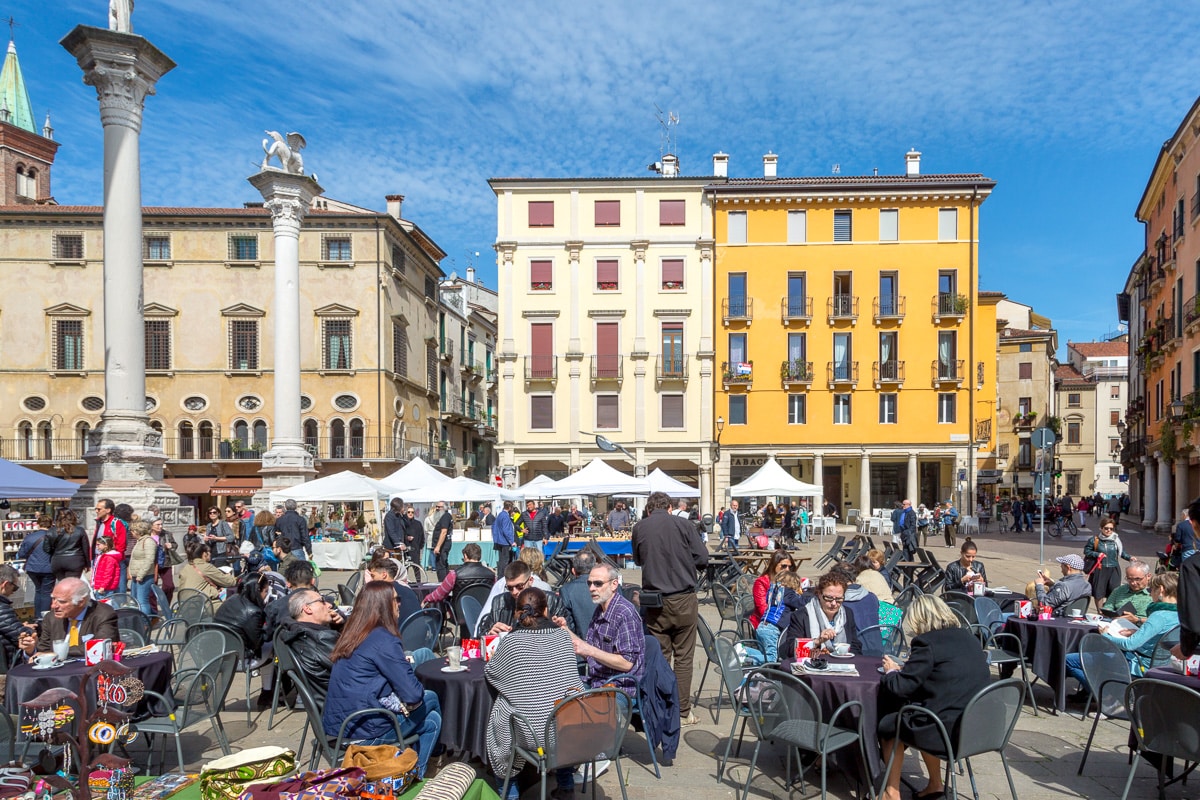 Today the scars of war are largely unseen, and the old city that dates back to medieval times is still fascinating.

Many of the extraordinary treasures of Vicenza are architectural, and the vast majority are due to 16th C Architect Andrea Palladio, who designed many palaces, public buildings and churches that left a unique imprint on the city, and the world of architecture. 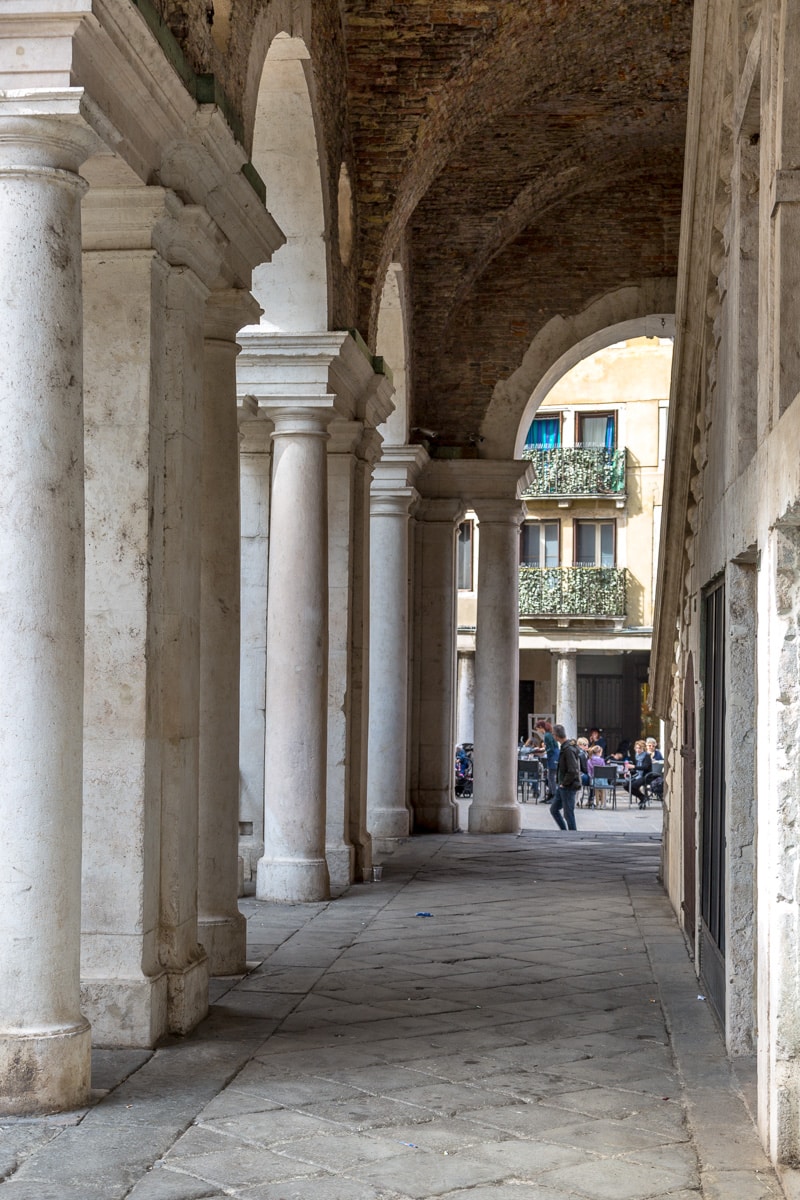 Palladio began his career as a simple stonecutter, later he was given opportunities to study ancient Greek and Roman architecture, and refined the classical styles to produce elegant architecture fitting the prosperous culture of the Veneto in the mid- to late-1500s.

His style, known as Palladianism, was later strongly felt in England in the first half of the 17th century and also in American architecture in the late 18th and early 19th century, as seen in Thomas Jefferson’s Monticello and many other buildings. 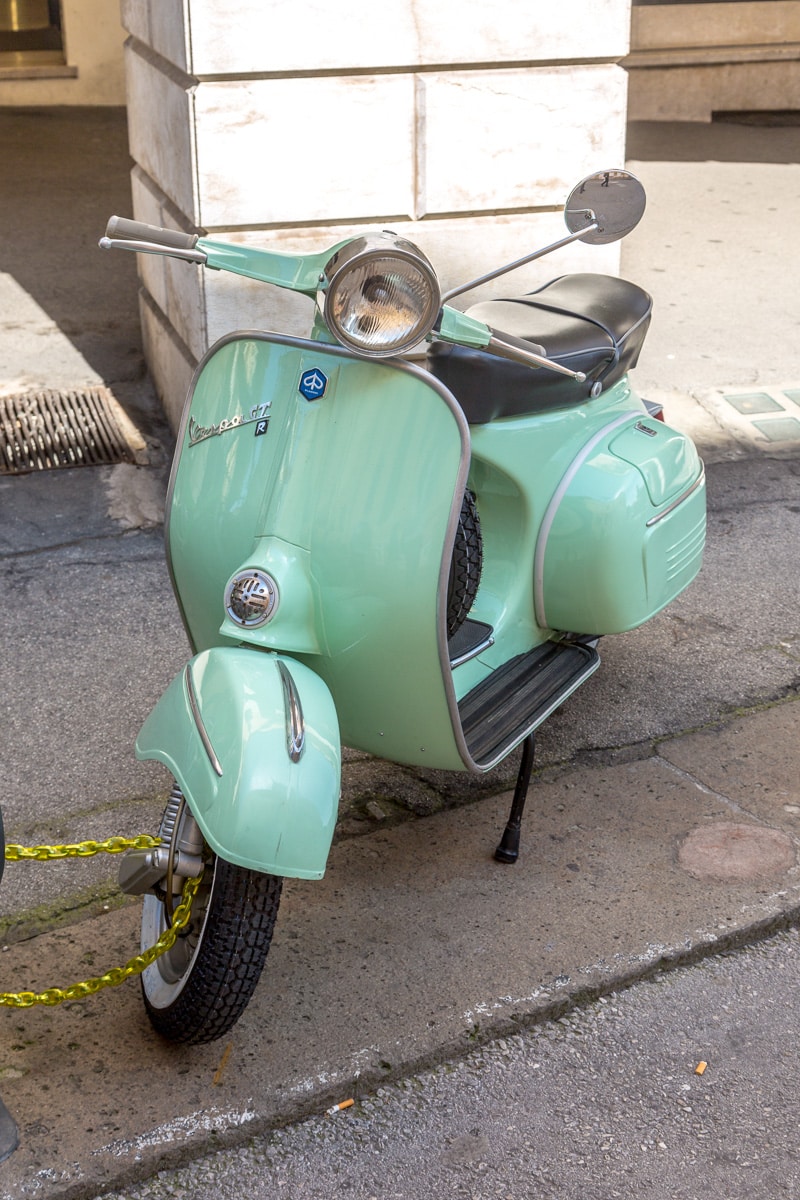 Another of Vicenza’s famous, though not widely known citizens, was Luigi Da Porto (Vicenza, 1485 –1529), best known as the author of the novel Historia novellamente ritrovata di due nobili amanti (“Newly found story of two noble lovers”), the story of Romeo and Juliet, later reprised by William Shakespeare for his famous drama.

As is our style, we wandered a great deal, and missed a number of sights, but nonetheless, as the accompanying images will attest, we enjoyed every minute of this charming city.