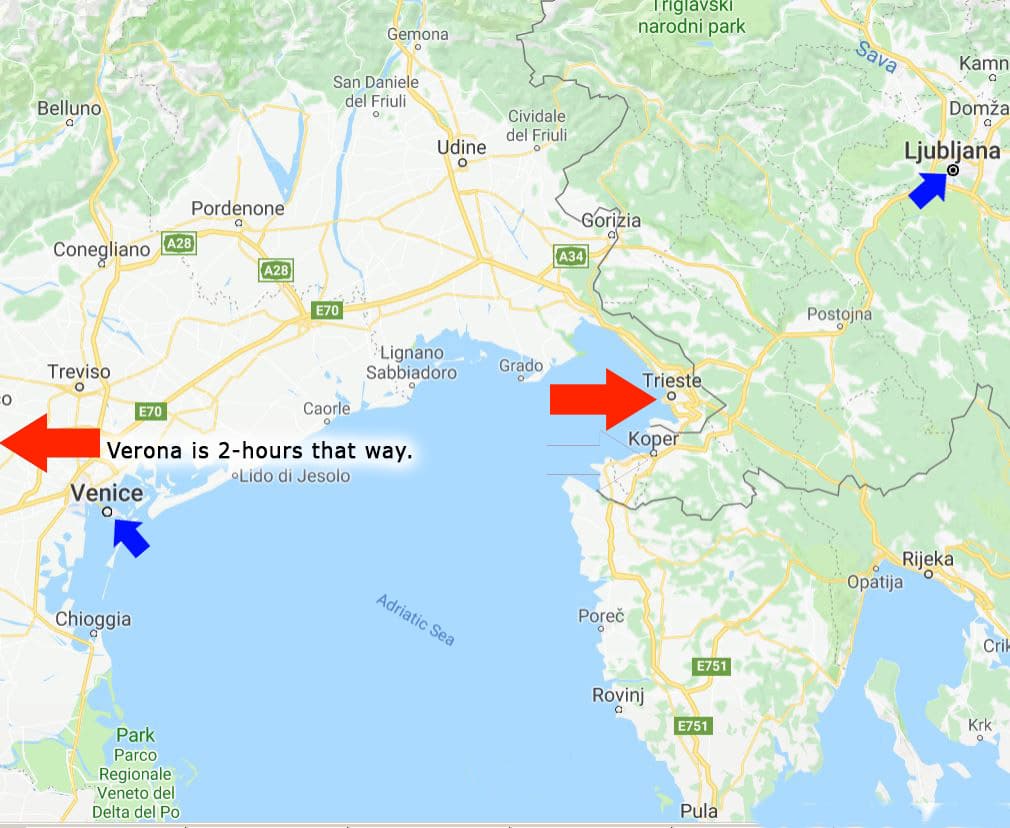 The packing was finished and it was time to leave Verona. As we rolled our bags to the train station, we dropped our trash and recyclables off at the bins. Then after double-checking the time and platform for our train, we boarded right on time and settled in for the three-hour trip to Trieste, Italy.

Whenever possible, when we transition on trains with all of our luggage, we book first-class seats. It’s good to have assigned seats, space for the bags, and the price isn’t too much more than for coach. There is also great service, drinks, snacks, newspapers and magazines. 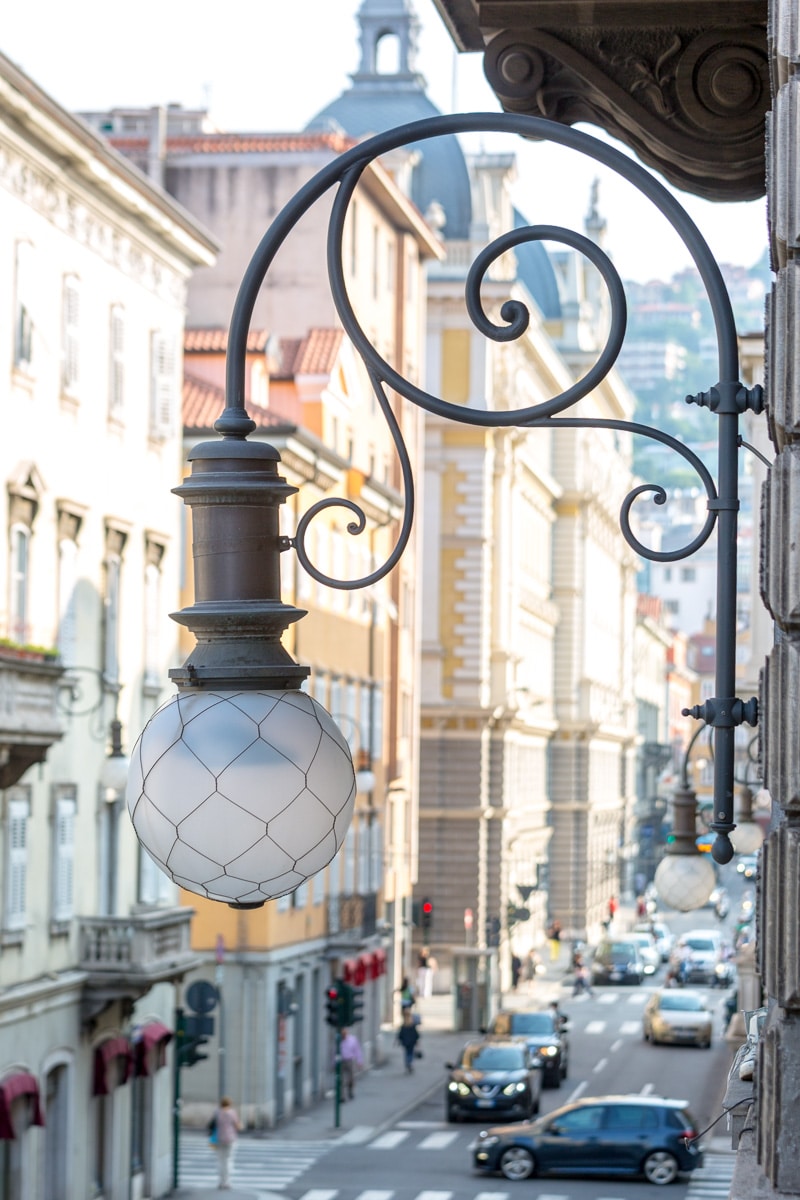 There were not many stops along the way, and the views as we rounded the northern end of the Adriatic Sea were beautiful. Time passed quickly, and we arrived in Trieste right on time. After getting our bearings at the train station we walked to the hotel. Though it was a bit further than we expected, with only one mid-course correction we found it without any problems.

The Nuovo Albergo Centro was a nice hotel, but since we were early, they first told us it would be at least another hour before we could check in. Then they offered us a room next to the reception desk that we could take right away. So we did, and after dropping the luggage in the room, we went out to explore the city. 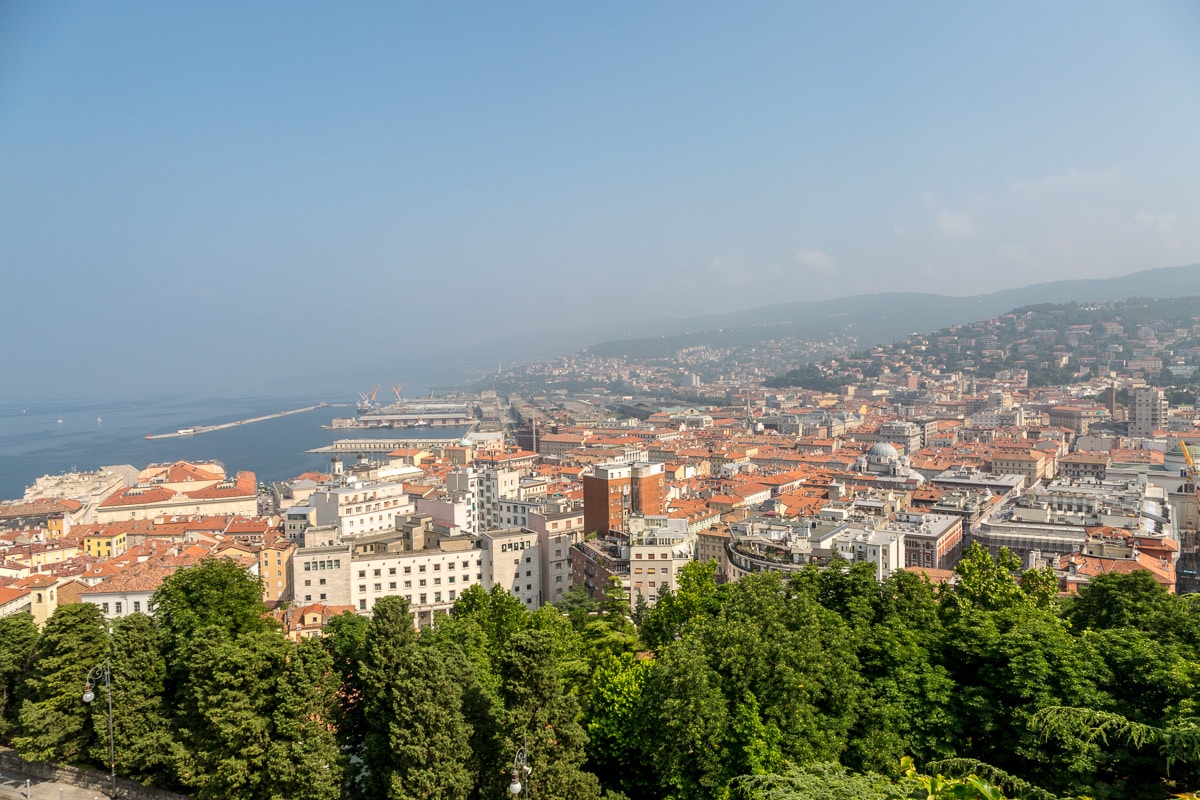 Located in Italy’s far northeast next to the Slovenian border, Trieste is located on a small strip of land with a distinct style, culture and history quite different from the rest of mainland Italy. It is the most important city in this beautiful region on the coast between the Adriatic Sea and Slovenia, and due to its location, Trieste has been influenced over the years by various other cultures and civilizations. 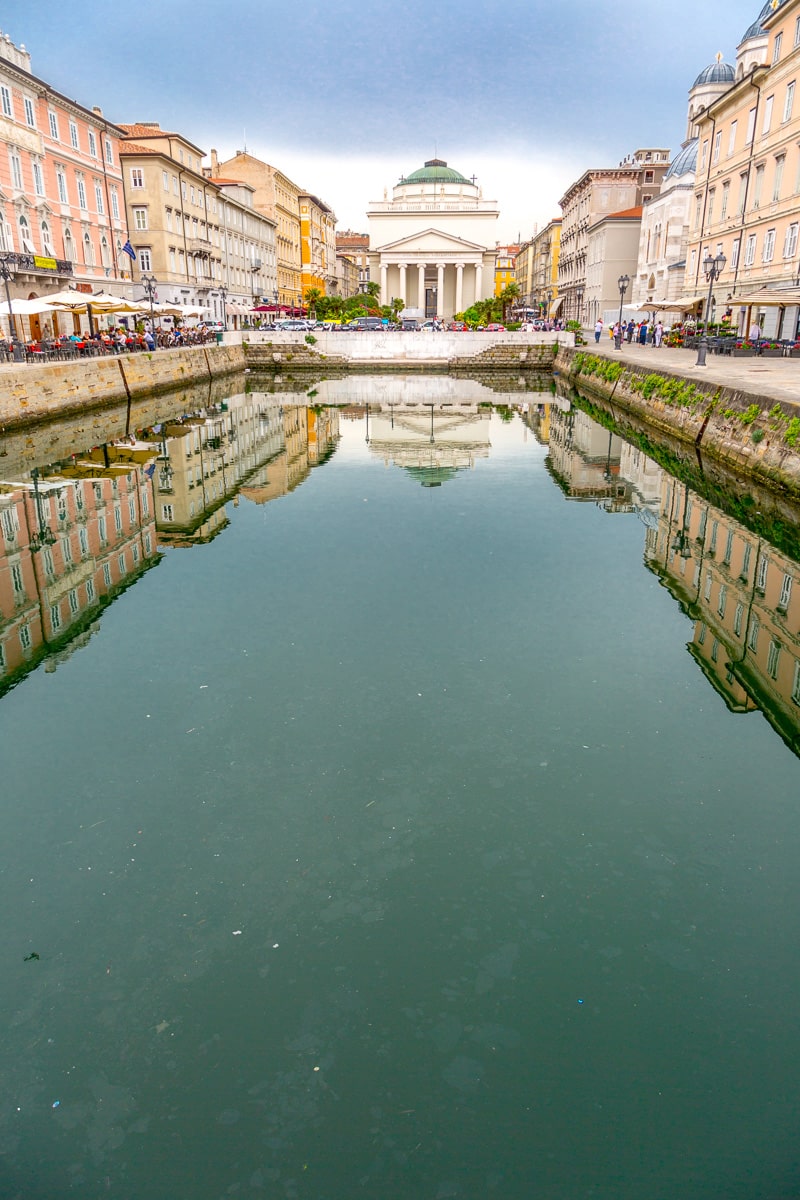 We walked, walked, and walked, first encountering the Canale Grande located in the heart of the historic town, not far from our hotel. The 200m (1/8 mi) long Grand Canal has existed since the 1700’s to allow boats access into the city to unload cargo. Lined with cafes, restaurants and grand facades, the canal enters the Adriatic at one end and terminates at Piazza Sant’Antonio Nuovo and the stately church of Sant’Antonio Taumaturgo at the other.

Next we wandered to the Piazza Unita Italia. This impressive plaza is known as the largest square situated next to the sea in Europe and faces out to the Adriatic. There are several impressive monuments and statues in the piazza, and many prestigious and important buildings line the square, each of which features stunning design and beautiful architecture.

Continuing on, we strolled through old medieval streets. The time had escaped us, and we realized we were getting hungry. So, now wandering with purpose, we eventually located the obscure, local restaurant that we had researched for lunch – Trattoria da Mara. 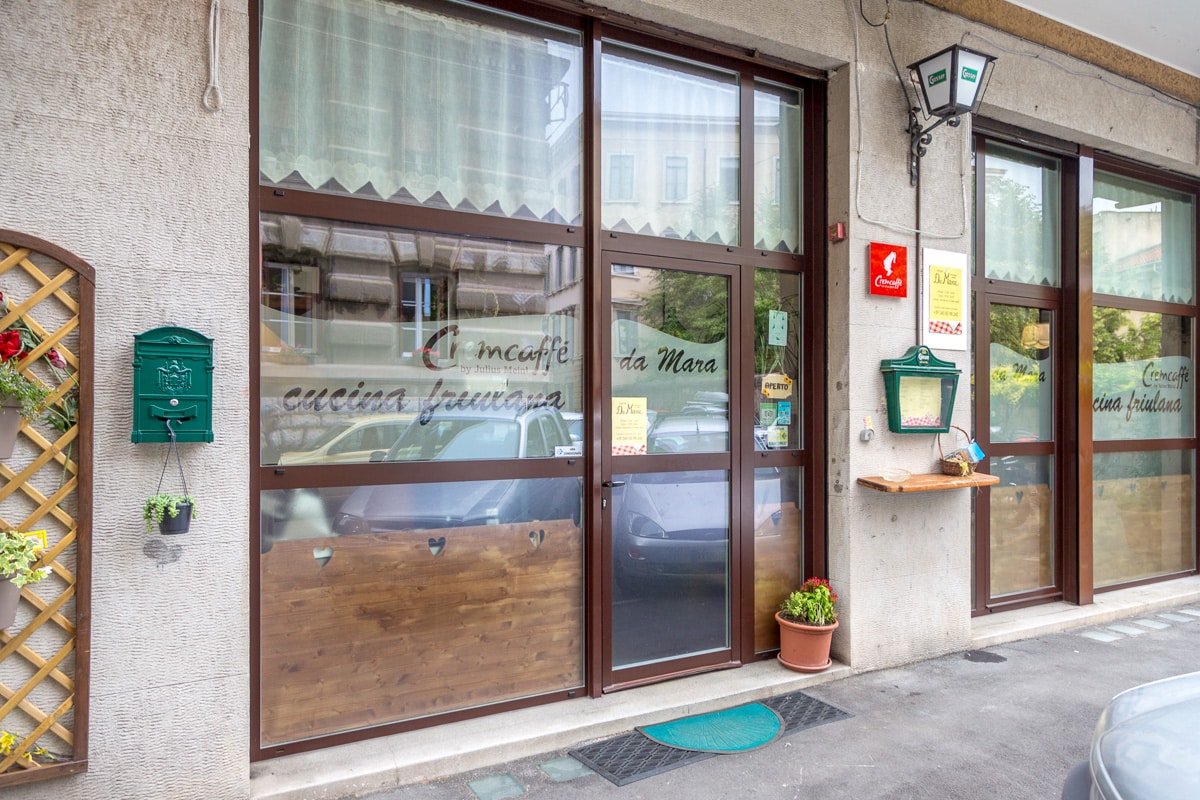 It was a small, charming place. There wasn’t anyone to greet us for a bit, but we waited until Mara came out of the kitchen and directed us to a table, it appeared that she was a one-woman show. There were another 10 people (two groups) in the small dining room awaiting their meals. Once their food was prepared and served, then she took our order.

The air was filled with great kitchen aromas, and soon our food arrived. I ordered gnocchi de pane con goulash, and Jeannie had the gnocchi de patate con ragu – both delicious. We saw the table of eight get the frittata after their primi, and then contorni. Mara asked if we wanted a secondo or contorno so we ordered the spinachi. We were glad to get a vegetable, and it was also delicious. 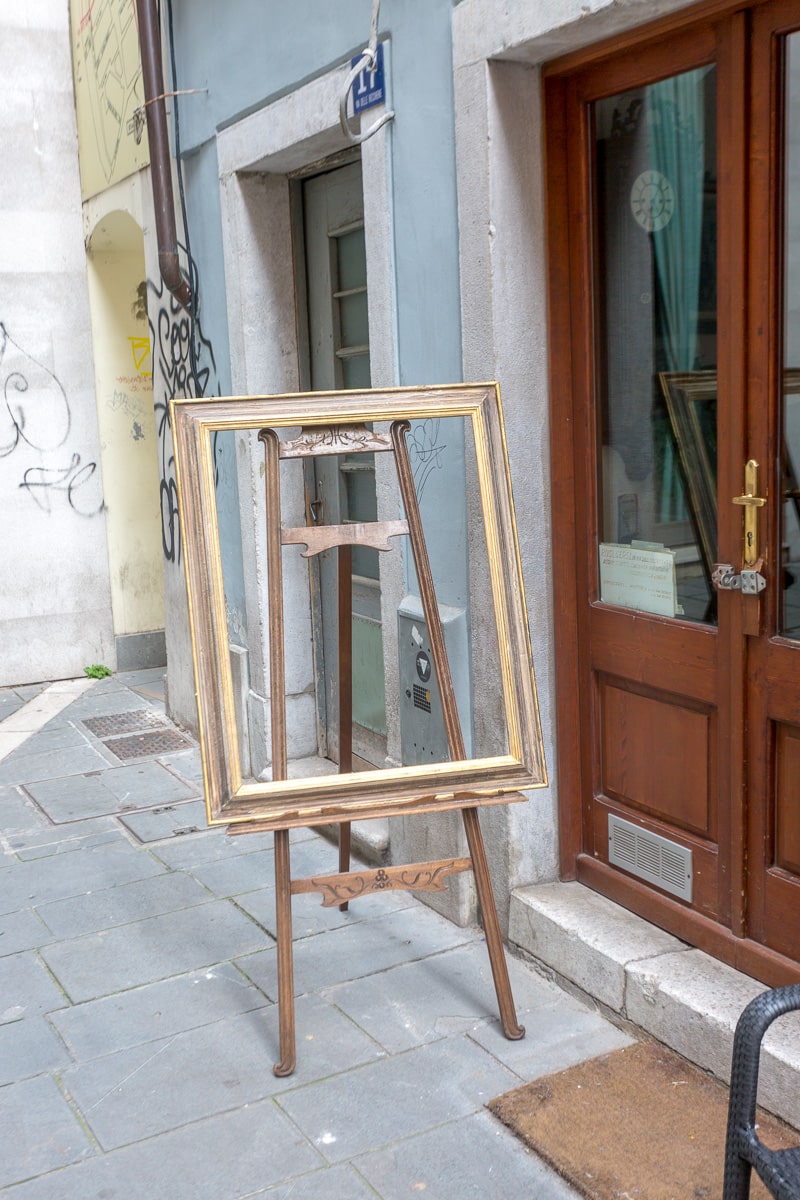 Of course, then there was the dolce (dessert) quandary. So we asked Mara which we should choose, and she gave the homemade pistaccio cake with strawberries a hearty endorsement, so that’s what we had. It too, was delicious, and after an espresso, we bid adieu and took off for more touring.

After a while we stopped back at the hotel, where Jeannie decided to take a nap while I went out for another hour or so.

Later that evening, it was simply wander, wine and pizza. And then we slept, hard.

The next morning we ate breakfast at the hotel. We were allowed a late check-out so we left our luggage and resumed our explorations.

Roman Tergeste (Trieste) was inhabited since the second millennium BC and was an important part of the Roman Republic. Our first target of the morning was the Roman amphitheater dating to roughly the 1st century CE. 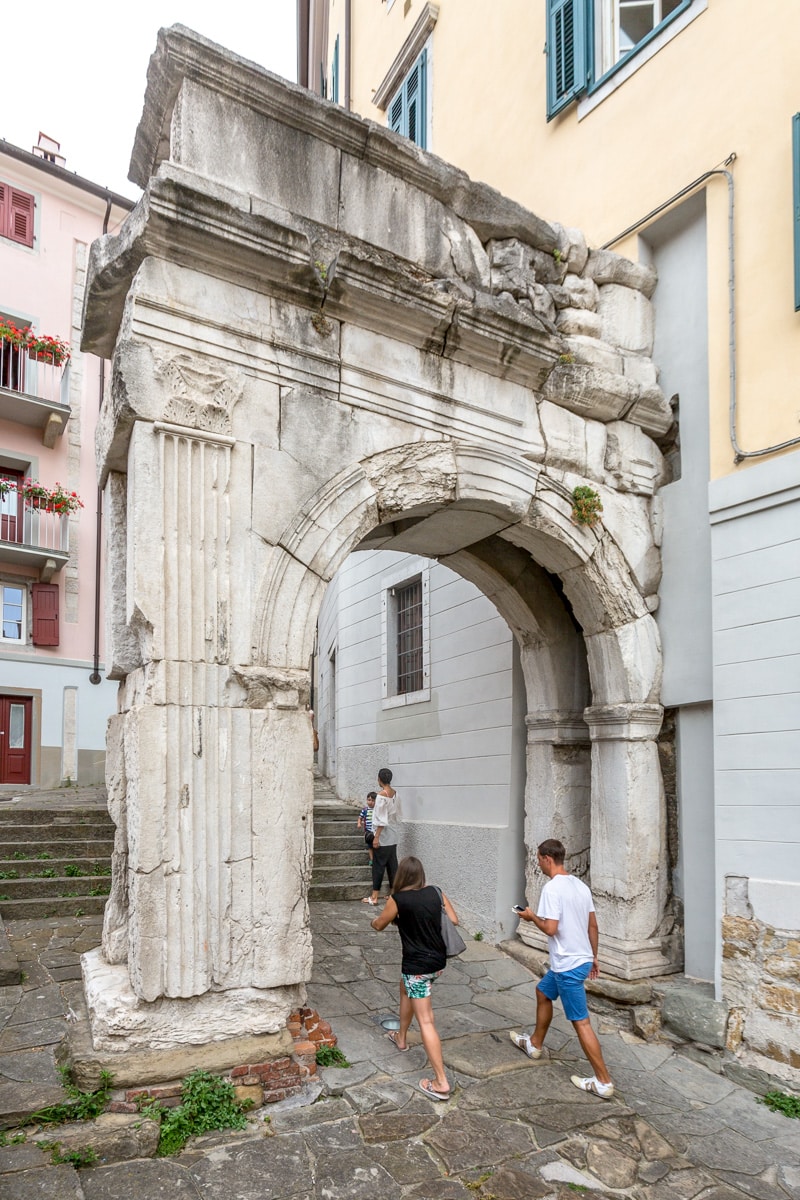 Our path also took us past what has been called the Arco di Riccardo or Richard’s Arch, a Roman passage through the city walls built by Augustus in 33-32 B.C.  After the walls had lost their defensive function it was reconstructed around the middle of the 1st century A.D. Legend links its name to the legendary passage through the city of Richard the Lion-heart.

From there, our path ascended steep streets and staircases to the hilltop where we found the site of the former Roman settlement, the Trieste Cathedral, and the Castello di San Giusto.

The monumental buildings of Roman Trieste were built on the summit of San Giusto hill, an area that held the Capitoline temple, basilica, and the Forum. Little remains of the massive structures that occupied the site, save several columns and low walls. Many structural elements were re-purposed and incorporated into later buildings including the nearby Cathedral of Saint Giusto also known as Trieste Cathedral. 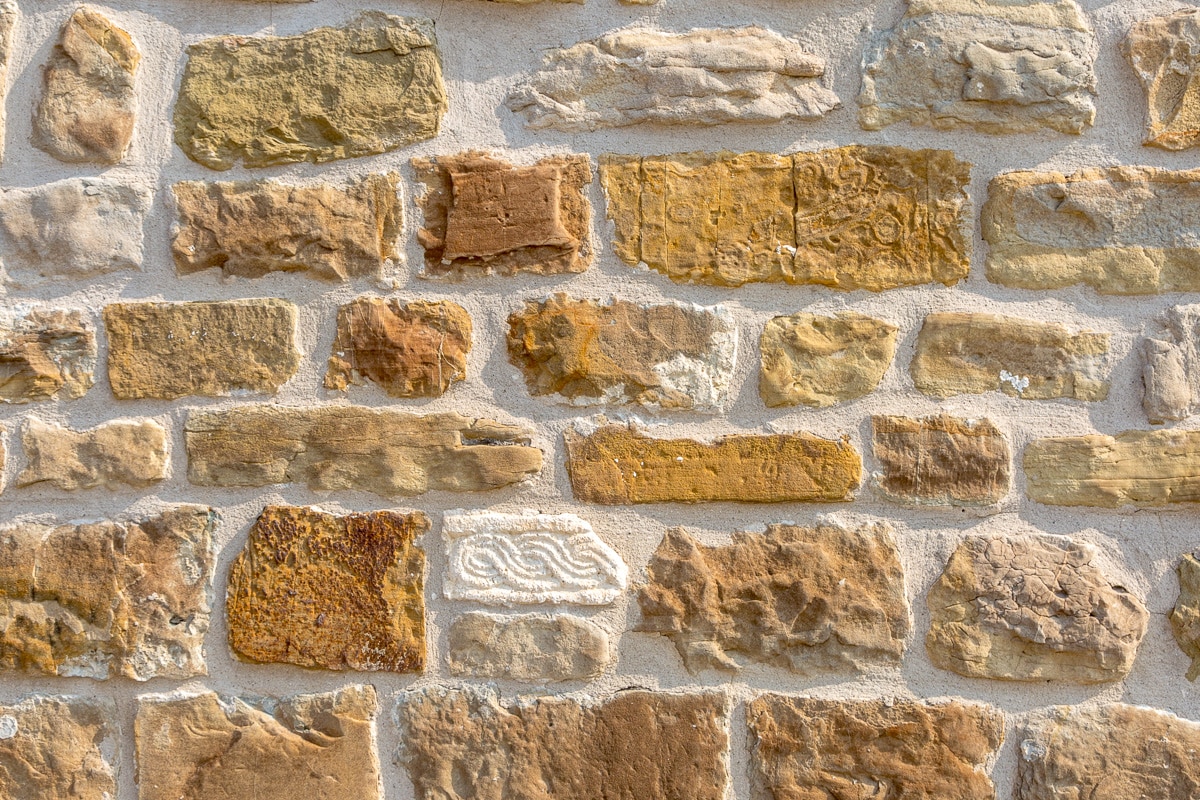 Originally constructed in 1320, the Cathedral of Saint Giusto features both Romanesque and Gothic design, while the interior is filled with a profusion of decoration, colored patterns and ornate sculptures. Notably, the dome over the main altar is covered with a stunning mosaic laid by master craftsmen from Veneto in the 12th-13th centuries.

The nearby massive Castello di San Giusto was built by Emperor Frederick III of Habsburg in 1468-1471 on the site of the previous Venetian castle, and expanded with the construction of ramparts until 1636. s of the city and sea. 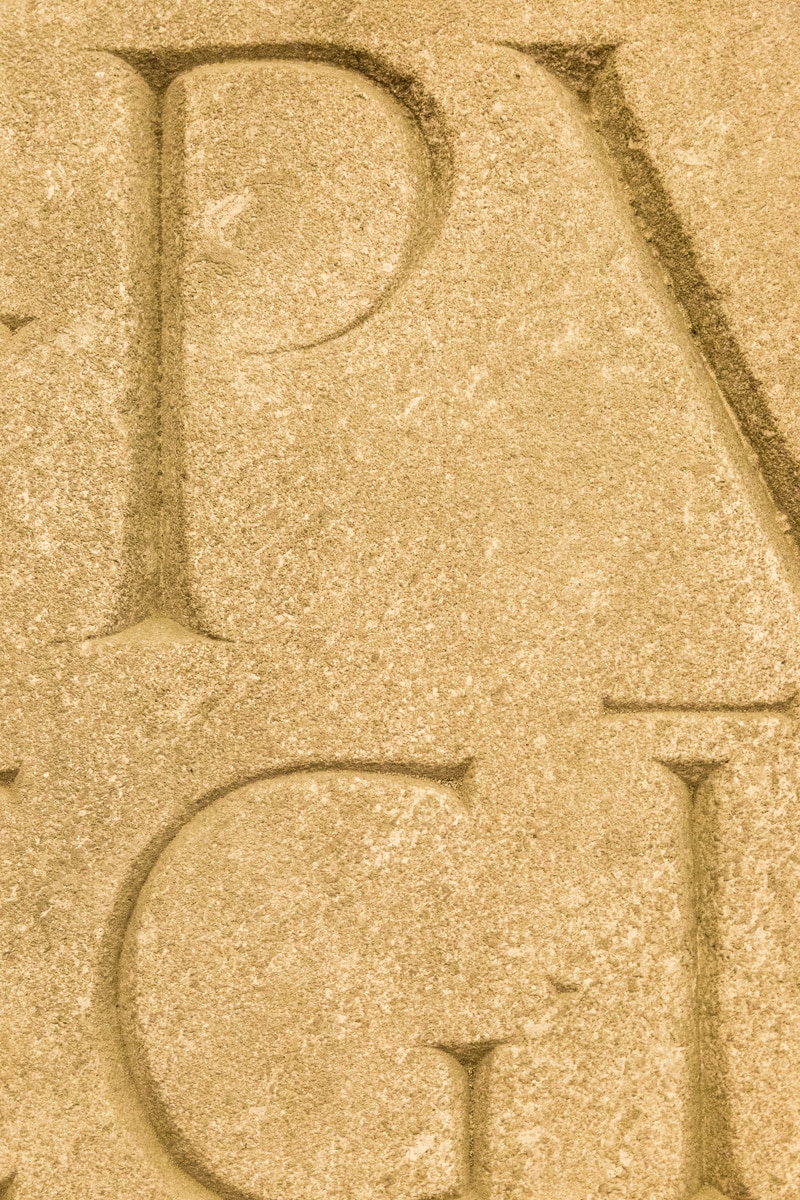 After we walked the ramparts and their panoramic vistas of the city and sea, we descended into the lapidarium and its collection of ancient Roman artifacts.

It had been a full morning, and it was time to walk back to our hotel. Along the way we stopped for lunch. Returning to our hotel, we picked up our luggage then stood outside to wait for our ride to Ljubljana, Slovenia. Our shared transport arrived only a few minutes late. There was only one other passenger, Peter, a professor of computer animation and short films. We gave him our card and planned to meet later for dinner.

We left Italy a short distance away, crossing the border into Slovenia. A new set of adventures lie ahead, and our excitement is growing.