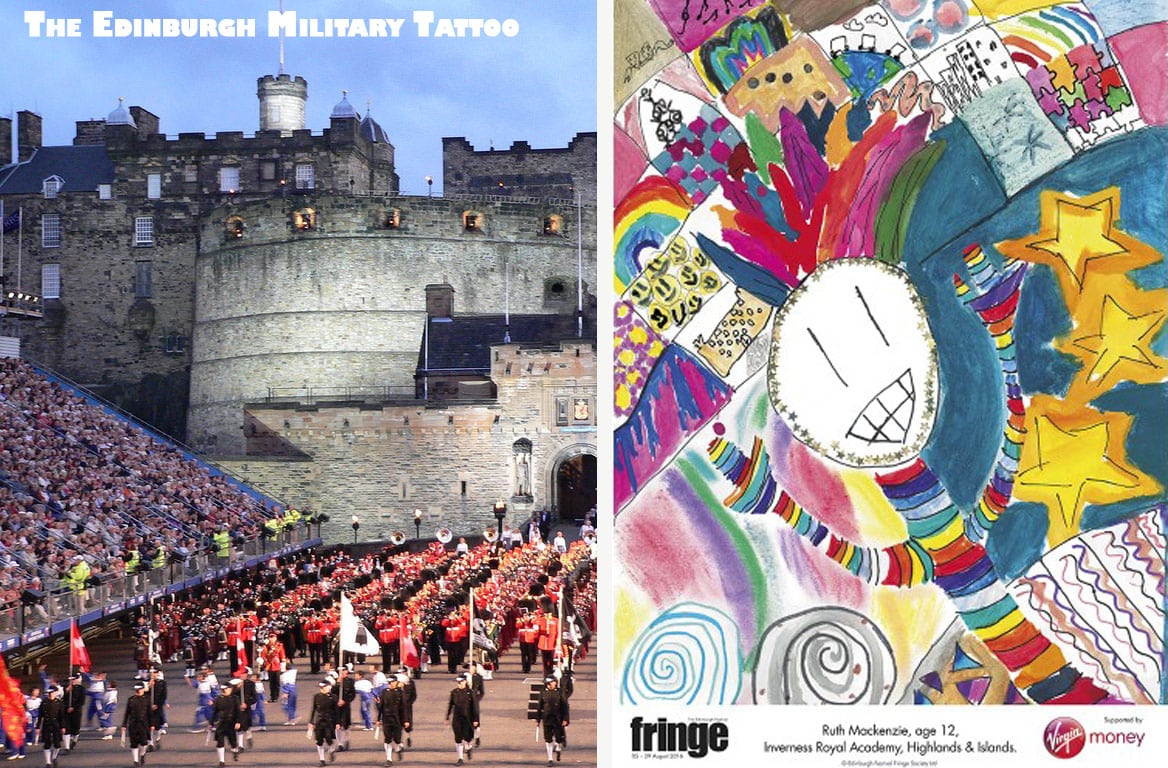 Among the many things that Edinburgh is famous for, there are two distinctive, world-class events that occur there in August. “The Fringe” is the world’s largest arts festival with 50,266 performances of 3,269 shows in 294 venues across the city; and the Royal Edinburgh Military Tattoo is a spectacle of over 25 performances in August each year involving almost 1,000 musicians, pipers, drummers, singers and dancers performing against the backdrop of Edinburgh Castle to an audience of 220,000-strong.

We would depart Edinburgh before either began.

Yes, we will miss out on the experience and eclectic fun, but we will avoid the insanely large crowds that descend on the city for pretty much the entire month of August. Besides, you can’t see everything. 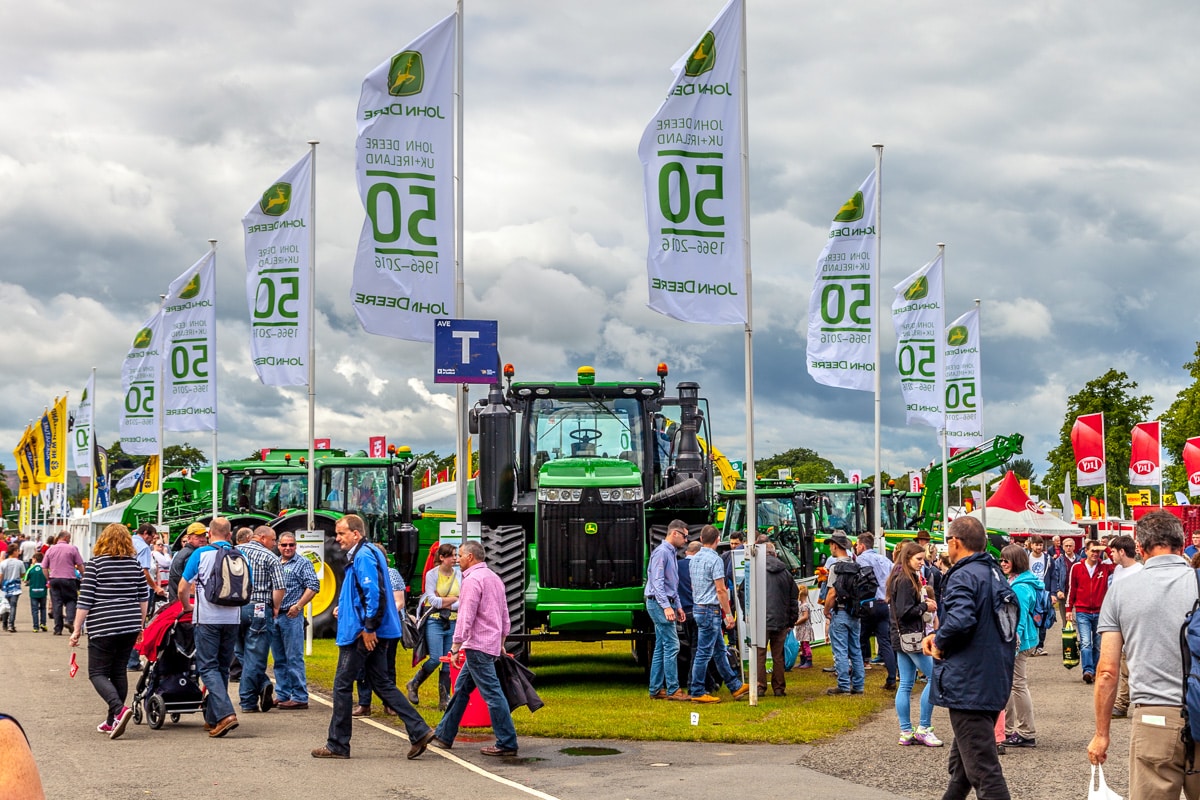 As I said, there are many things that Edinburgh is famous for, and one of the big events we were able to attend was the Royal Highland Show, Scotland’s annual farming and countryside exposition.

OK, maybe it isn’t quite in the same class of entertainment as the Fringe or Tattoo, but in a real sense it is a far more practical exposition.

Almost 75% of Scotland’s land mass is under some form of agricultural production, and 10% of all Scottish jobs are dependent on agriculture. In other words agriculture is big here, and this event is an important showcase for everything related to it. 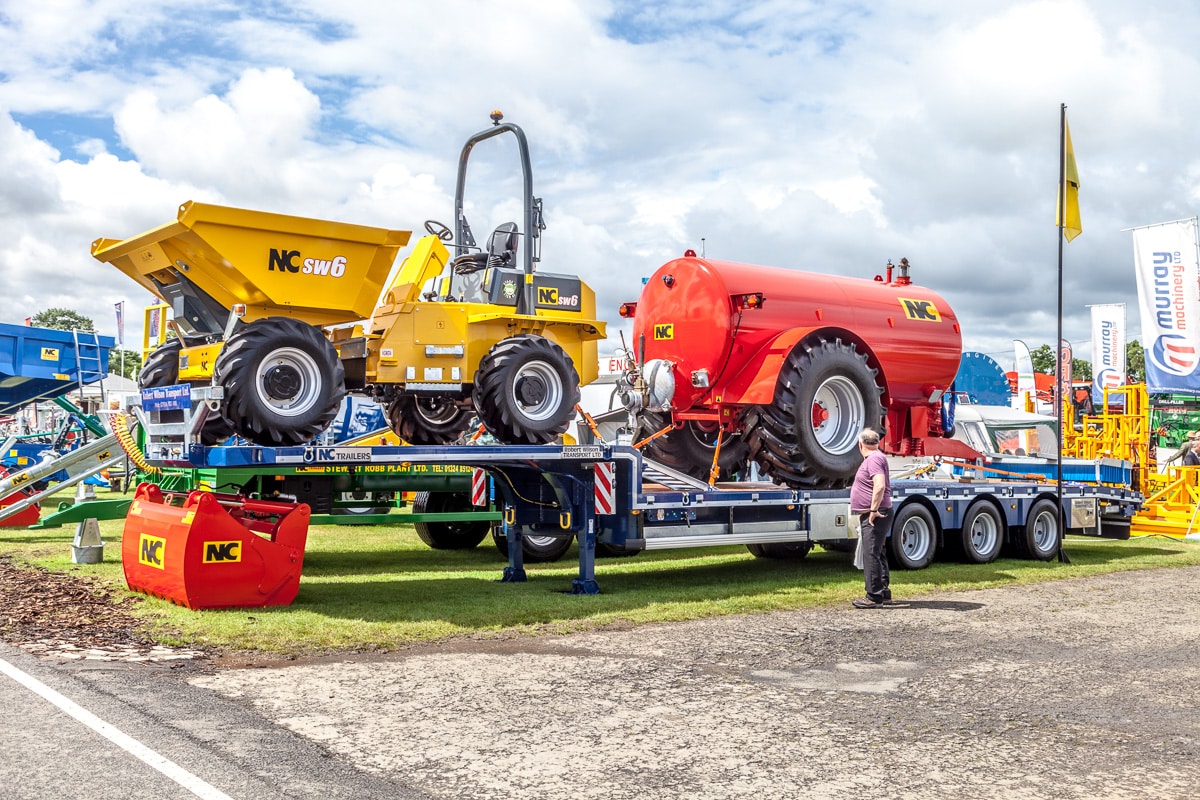 Our day began by making our way into the city to catch one of the many shuttle buses to the Royal Highland Centre in Ingliston, about 10 miles outside of town. The Royal Highland Show first started in 1822 moving about the country from year to year, but since 1960, it has been permanently based in Ingliston. Having already purchased our tickets online, we arrived ready to enjoy the day. 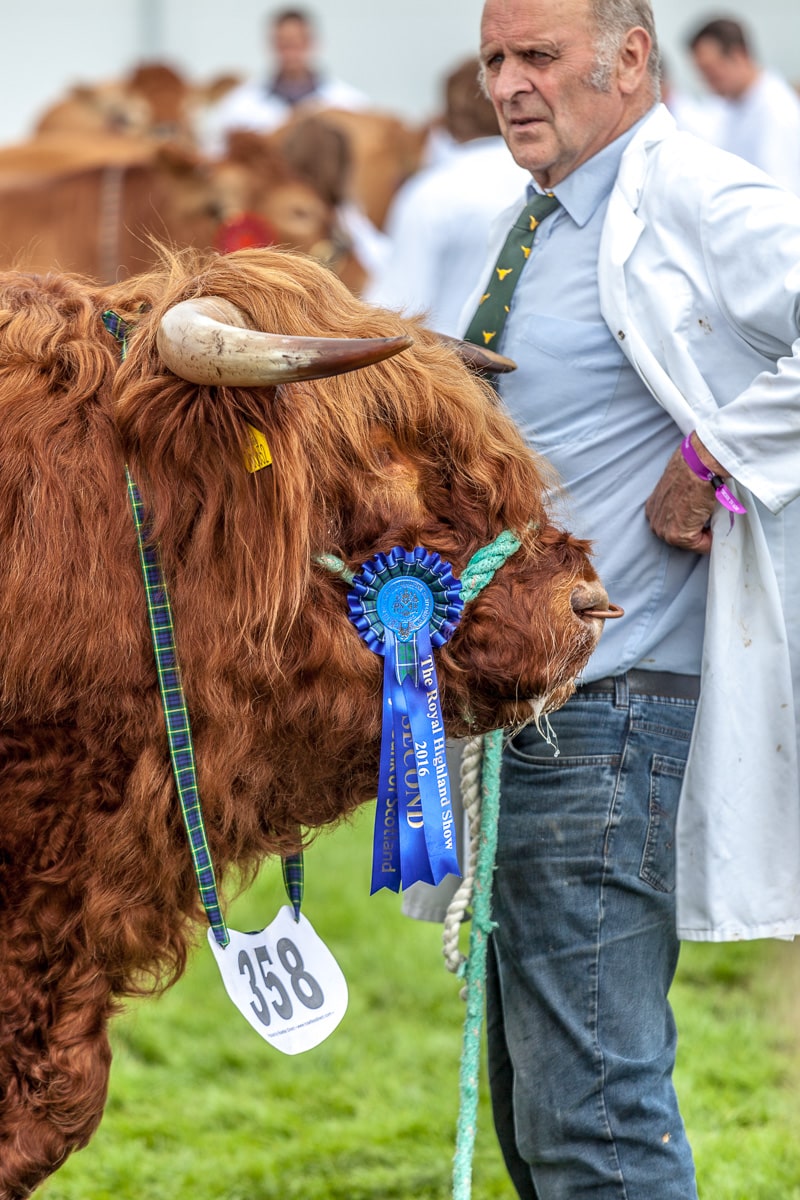 Since the agriculture in Scotland is far removed from anything we knew in Florida, it was a very eye-opening experience. As we entered the gates, spread before us was a massive collection of farm equipment and implements. The machines ranged from riding lawnmowers to tractors the size of small houses.  There were harvesters, combines, de-stoners (for removing stones and clods from fields), grain driers and potato sorters, sprayers, cultivators, livestock handling equipment, trailers, fencing and … such an amazing array of mechanized, automated, and obviously very expensive technologies to improve farming efficiencies. And did I say that they were huge? 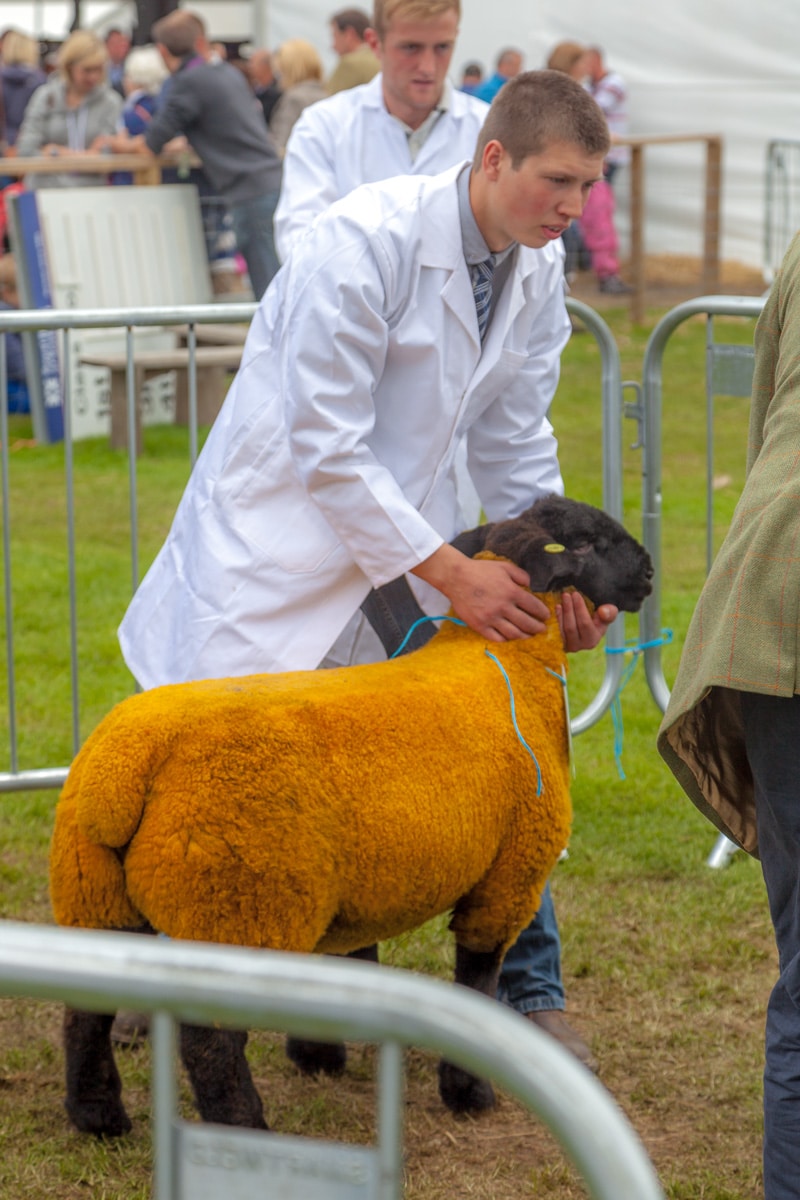 There were competitions, demonstrations and exhibitions of sheep shearing, fleece, farriery, show jumping, team driving, cheese, butter and ice cream and for honey, and on and on. There was too much to see. There were crafts and art, lifestyle, and outdoor living exhibits, there was food and entertainment, and …

After several hours we were exhausted, we had wandered the 110 acre showground rather well, and had thoroughly enjoyed the day. Making our way back to our apartment we made dinner and began to settle in for the evening.

At about 7:00PM, we heard music. Loud music. Our first thought was there was a party in a neighboring apartment, but the sound wasn’t coming through the walls. Opening the window to see if we could figure out where the party was, we realized that the music was from outside. Maybe there was a concert in the Meadowbank stadium less than two blocks from our flat, but it sounded like Elton John. 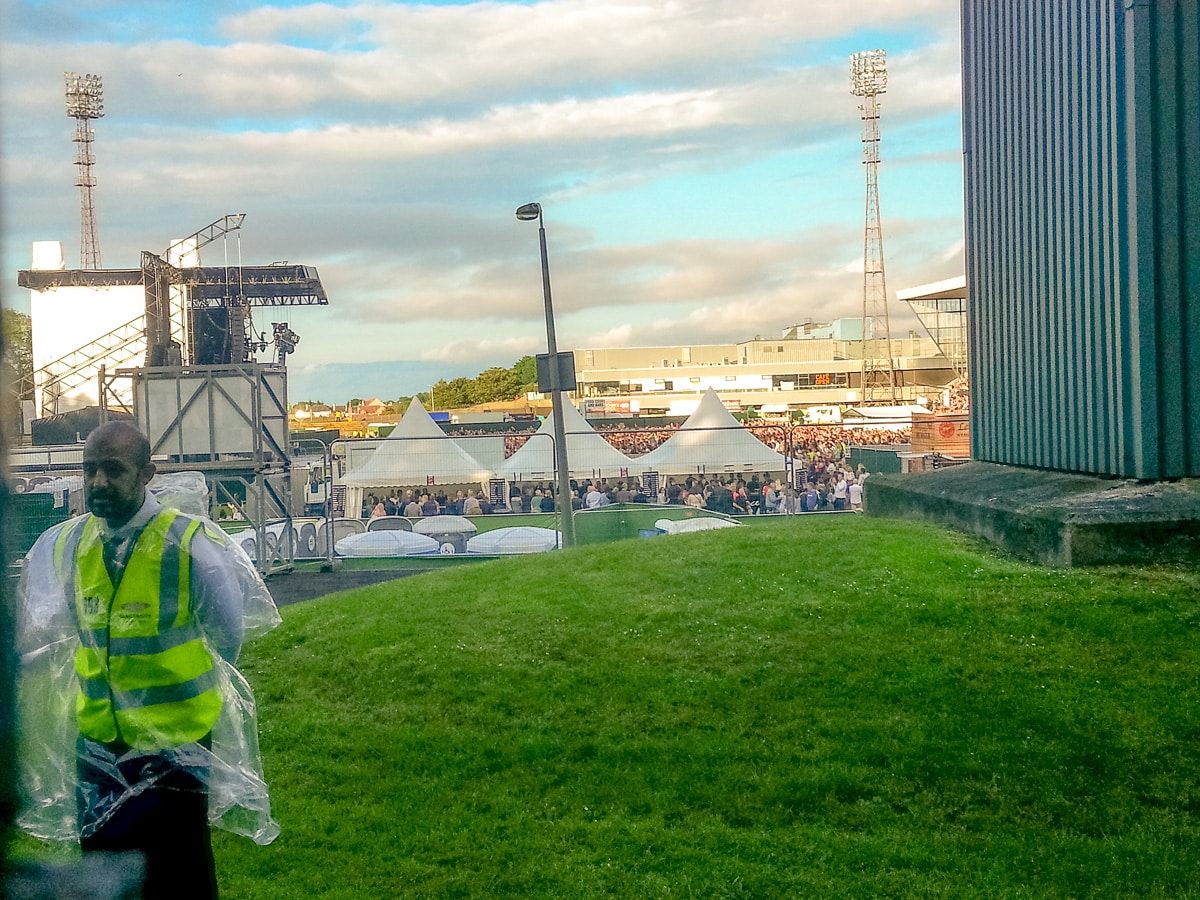 So I searched on the internet, and found that indeed it was Elton John! Elton John was playing live, I mean right here. The sound wasn’t bad coming through the window, but since sunset wouldn’t come until well after 10:00PM, we got dressed to go walk around the stadium to see what we could see. Heck, if there were tickets available we might even consider that.

Minutes later, we were standing outside the stadium, peering through the open spaces in the fences. We could see the stage with the tiny figures of Elton John and his band, and the jumbotron screen had images that we could see OK. Besides, the sound quality was pretty good. 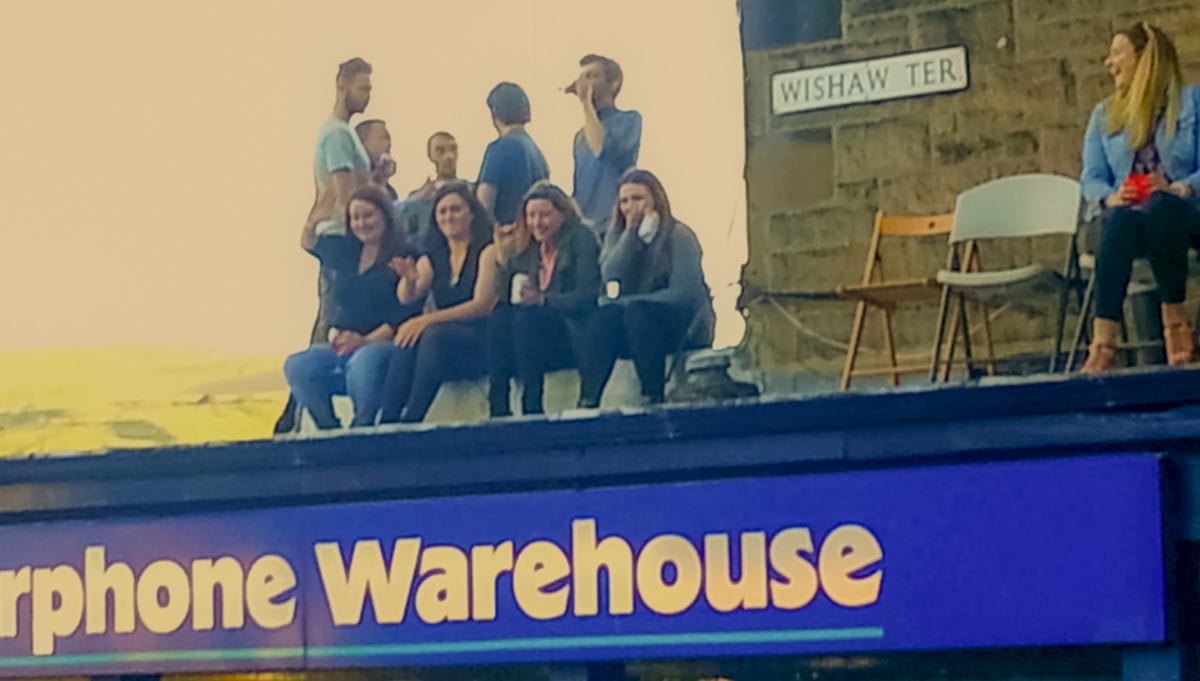 Wandering past one of the entrance gates, we gazed past the security guards, one of whom was rocking to the music, as were we. We chatted to her briefly as I tried to take a couple of photos. Then we went to the main entrance and inquired about tickets. No luck, sales ended after the concert began.

There were no places to sit outside the stadium, when we noticed a McDonald’s across the street. It had outdoor seating, and only a few customers. So we ordered some fries and sodas, sat outside and listened to a musical icon of our youth, and we had the best free seats available. Or so we thought. 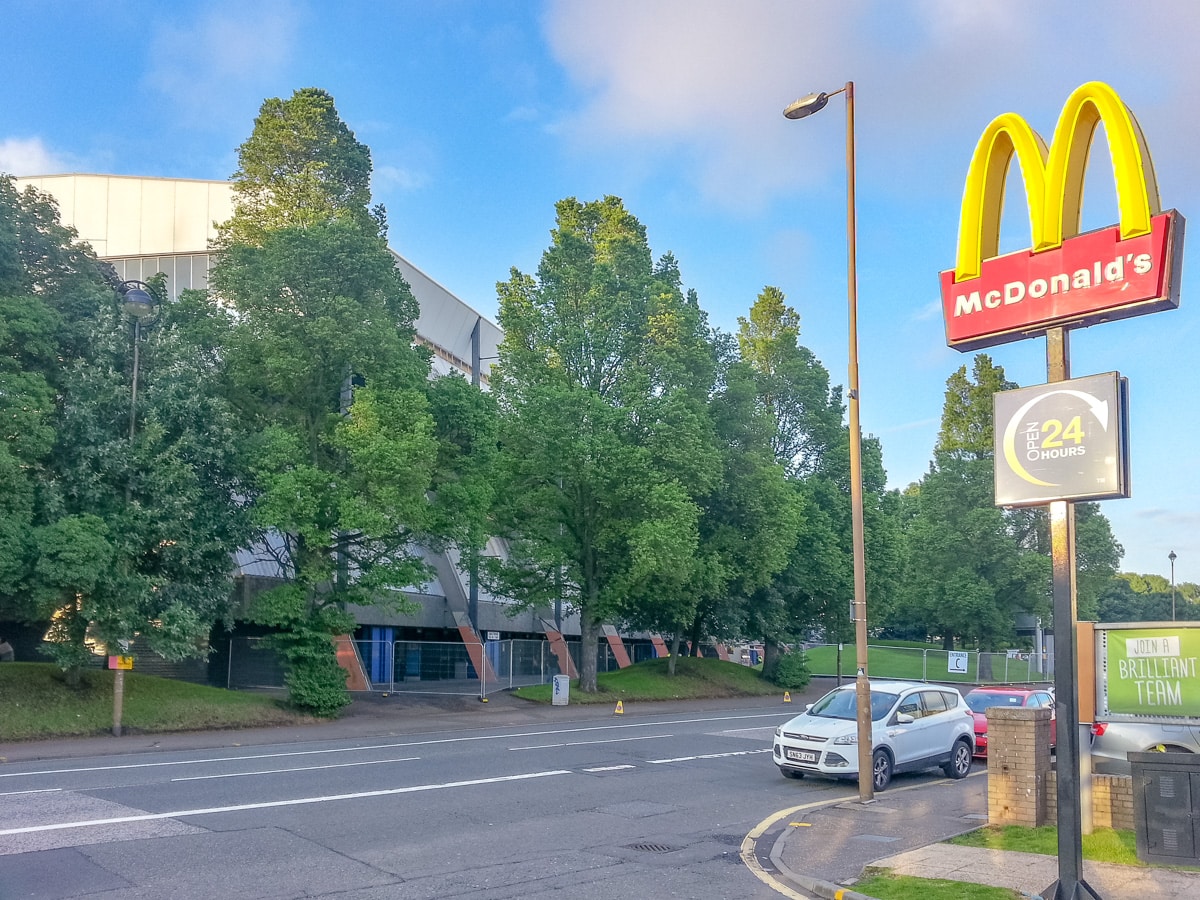 Well, McDonalds was at least a place to sit outside, the sound was great, we had drinks and some fries and were having a great time.

BUT WAIT, it gets better!

So, we were sitting there (two grey-haired rockers) when a young couple walked by, then came over and told us that they had to leave the concert early and asked if we would like their tickets? Well duh! 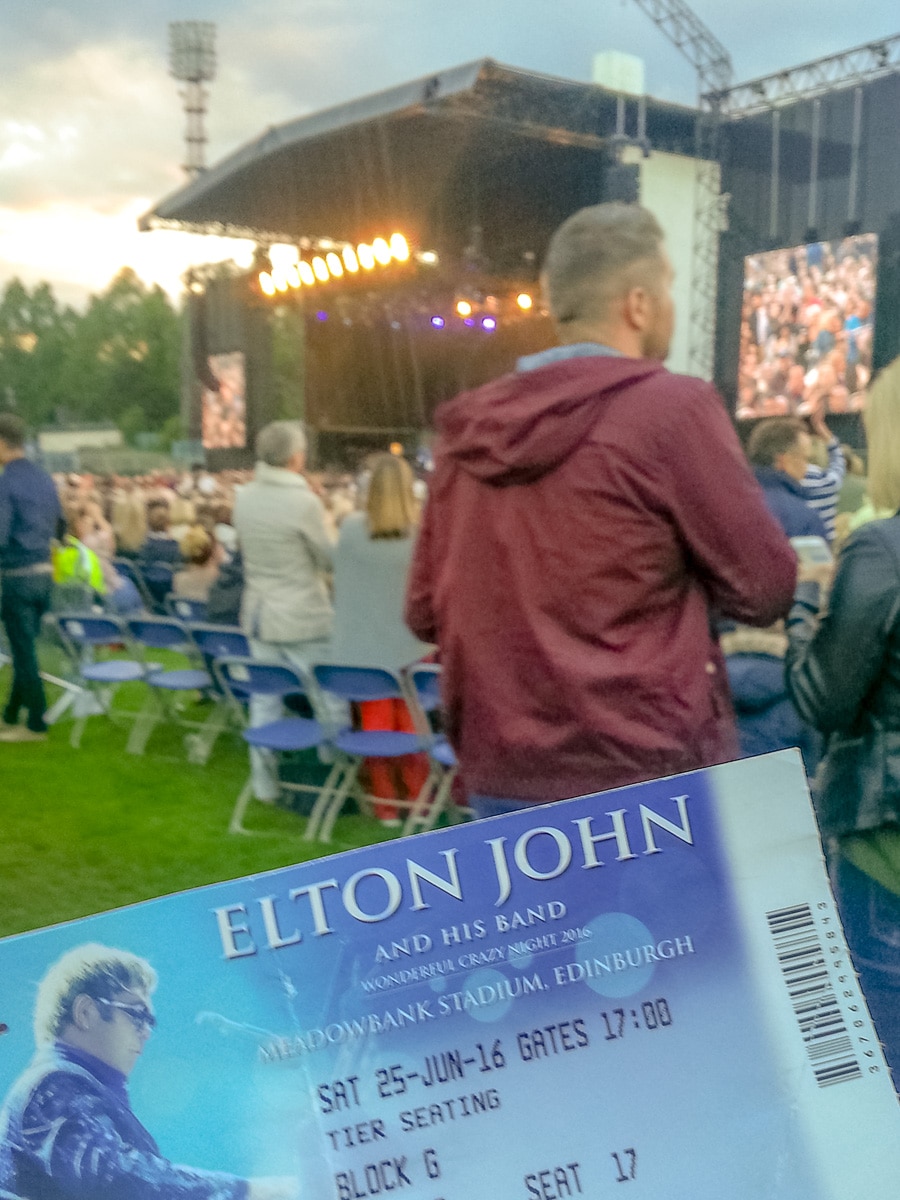 We thanked them profusely and took off for the entrance where we had seen the security guard rocking-out earlier. Handing her our newly acquired tickets, she looked closely at them, asked us if we had been inside yet, we explained how we got them and she looked at the tickets again, consulted with one of her colleagues, handed the tickets back and waved us through.

The playlist was impressive, and we got in during Goodbye Yellow Brick Road, and there was easily 1.5 hours of the concert remaining. It was an awesome experience, the music was great, and as we learned, it is likely this will be the last tour Sir John will make. The playlist in order of play:

Funeral for a Friend, The Bitch Is Back, Bennie and the Jets, I Guess That’s Why They Call It the Blues, Daniel, Looking Up, A Good Heart, Philadelphia Freedom, Rocket Man (I Think It’s Going to Be a Long, Long Time), Tiny Dancer, Levon, Goodbye Yellow Brick Road, Have Mercy on the Criminal, Sorry Seems to Be the Hardest Word, Your Song, Burn Down the Mission, Sad Songs (Say So Much), Blue Wonderful, Don’t Let the Sun Go Down on Me, All the Girls Love Alice, I’m Still Standing, Your Sister Can’t Twist (But She Can Rock ‘n Roll), Saturday Night’s Alright for Fighting, Candle in the Wind, and finally ending with Crocodile Rock 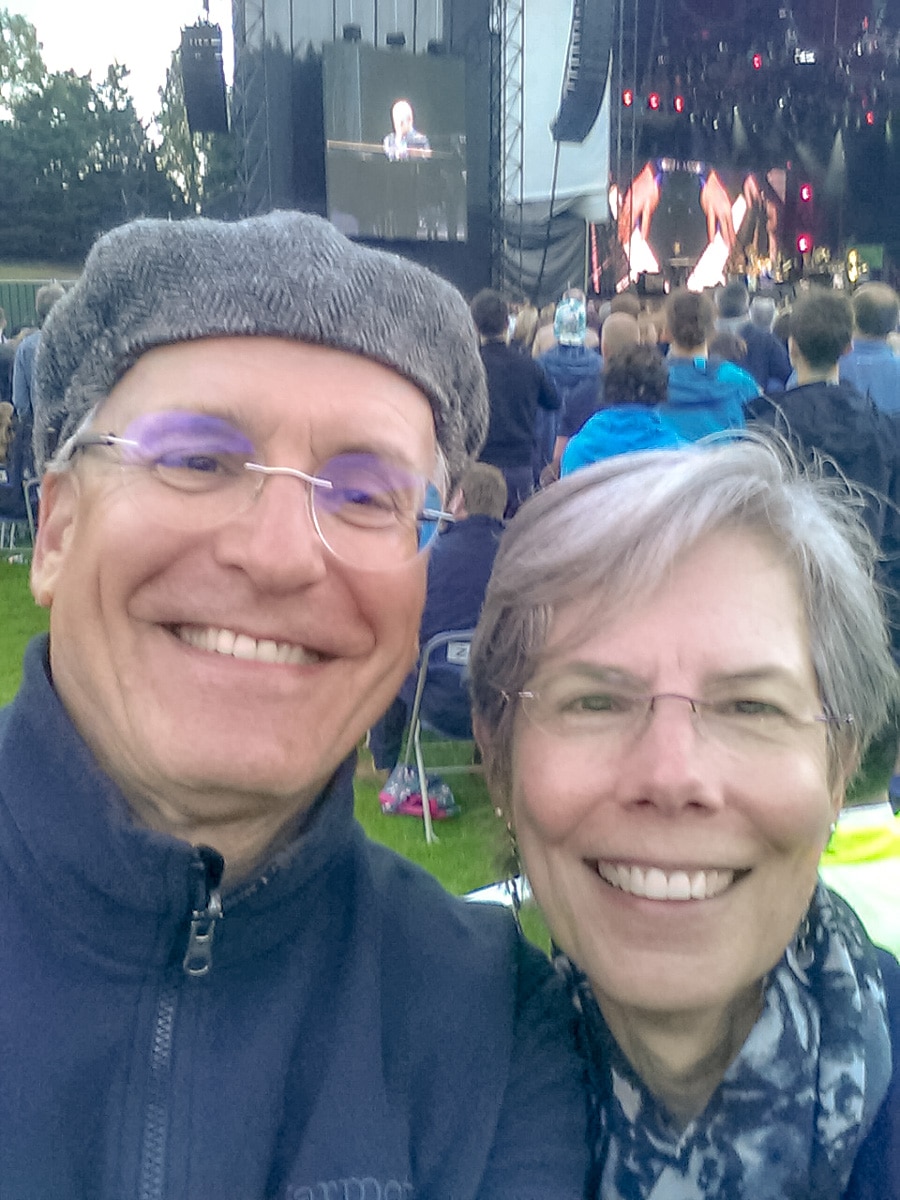 It was an amazing end to a great day, but that’s still not all.

As the concert ended under the clear, twilight sky, and we walked the few steps to our apartment we glanced at the tickets that had been given to us. As it turns out, we hadn’t been given two tickets, but rather one ticket and the receipt, which looked almost exactly like a ticket. The young couple that gave them to us likely still had the second ticket in a pocket.

It was then we realized that the security staff who let us in, allowed us entrance on one ticket and the receipt. We had briefly wondered why she had paused when looking at our tickets, and it explained her grin as she let us, two older American rockers, in to see Elton John.