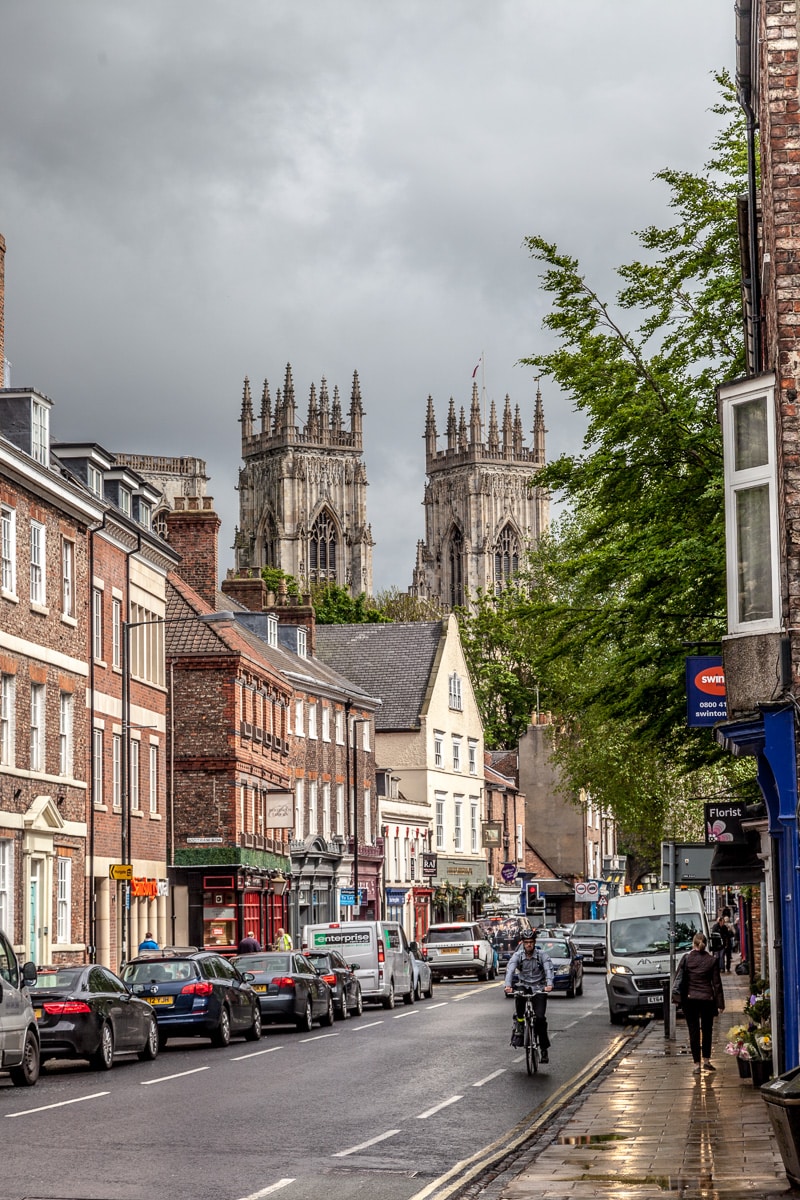 After having been without a car in a small village for three-weeks, we felt the need to go further afield. We had considered the train system, but the schedules and destinations didn’t synchronize quite like we wanted. So, we went to Manchester, rented a car, and shortly after took our first road trip to York. Although Yorktown in Virginia was named after the city of York, not so New York city or state which were named for the Duke of York, specifically James Stuart (1633-1701) who would later become later King James II. 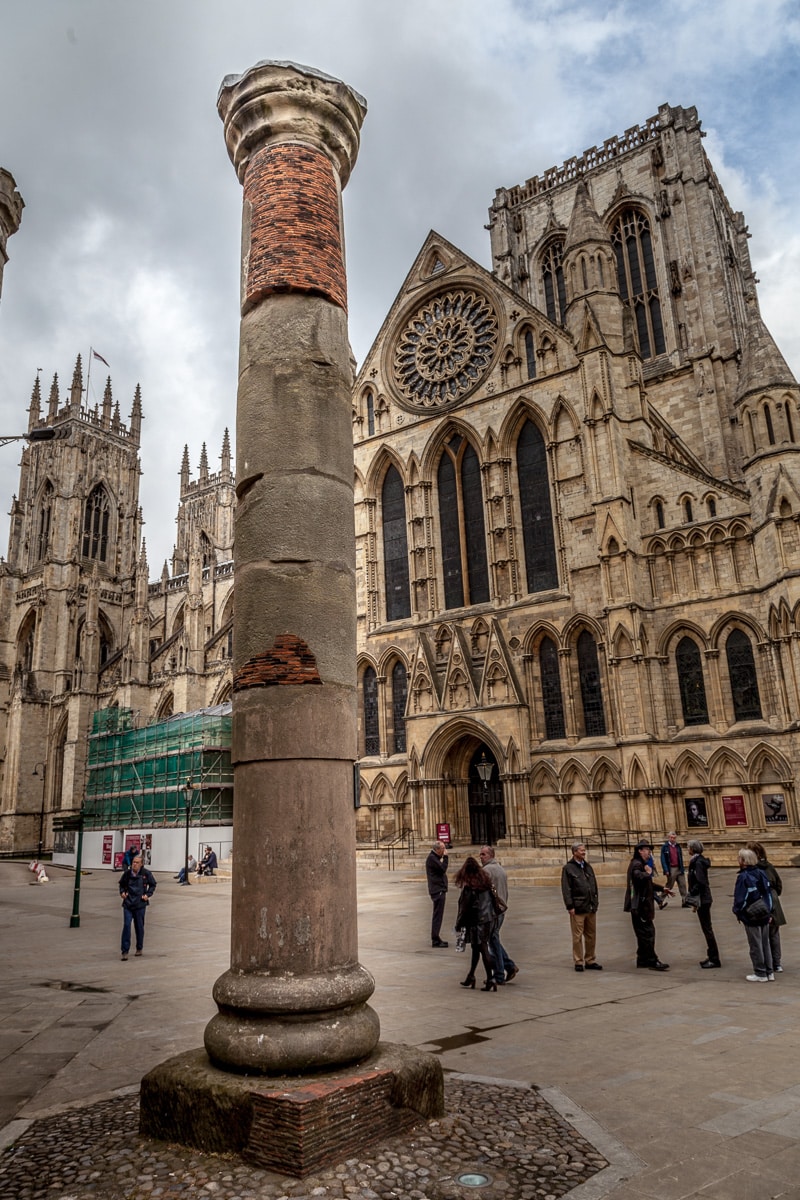 The city was founded in 71 AD when Roman Legions conquered the Brigantes, a Celtic tribe. Later came the Vikings who gave it the name Jórvík; then by the 10th Century came the Normans, and in 1485 the Tudor age began and York was at its highpoint. It wasn’t until the 1700s that York became a fashionable destination with Georgian elegance adding to its architectural and historical charms.

York’s 13th-century walls still enclose a medieval web of narrow streets, and at the center stands the huge, awe-inspiring York Minster, certainly one of the most beautiful Gothic cathedrals in the world. 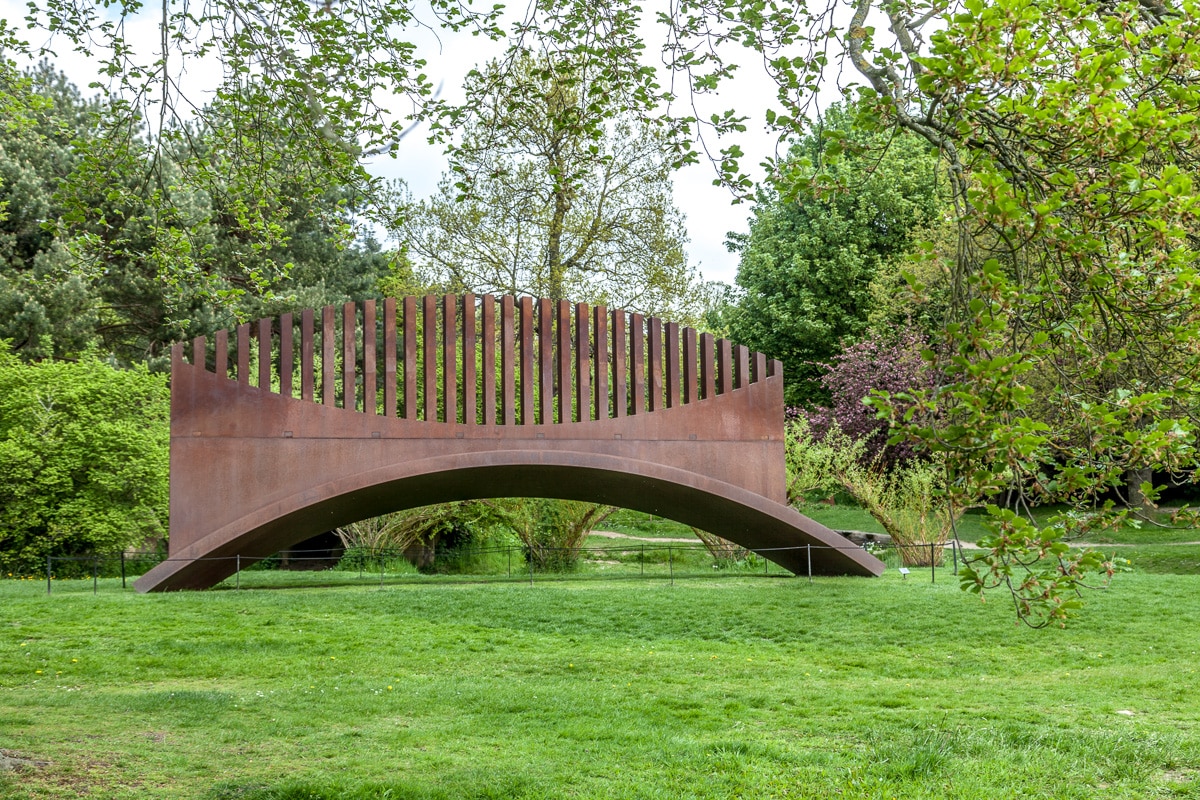 On the way to York we made a detour to the Yorkshire Sculpture Park. We had seen the excellent BBC documentary Forest, Field & Sky: Art out of Nature that highlighted two of the artists’ work we hoped to see.

The GPS seemed intent on taking us on a far more circuitous route than the map seemed to indicate was best, and after a bit of creative navigating, we arrived without too many arguments. 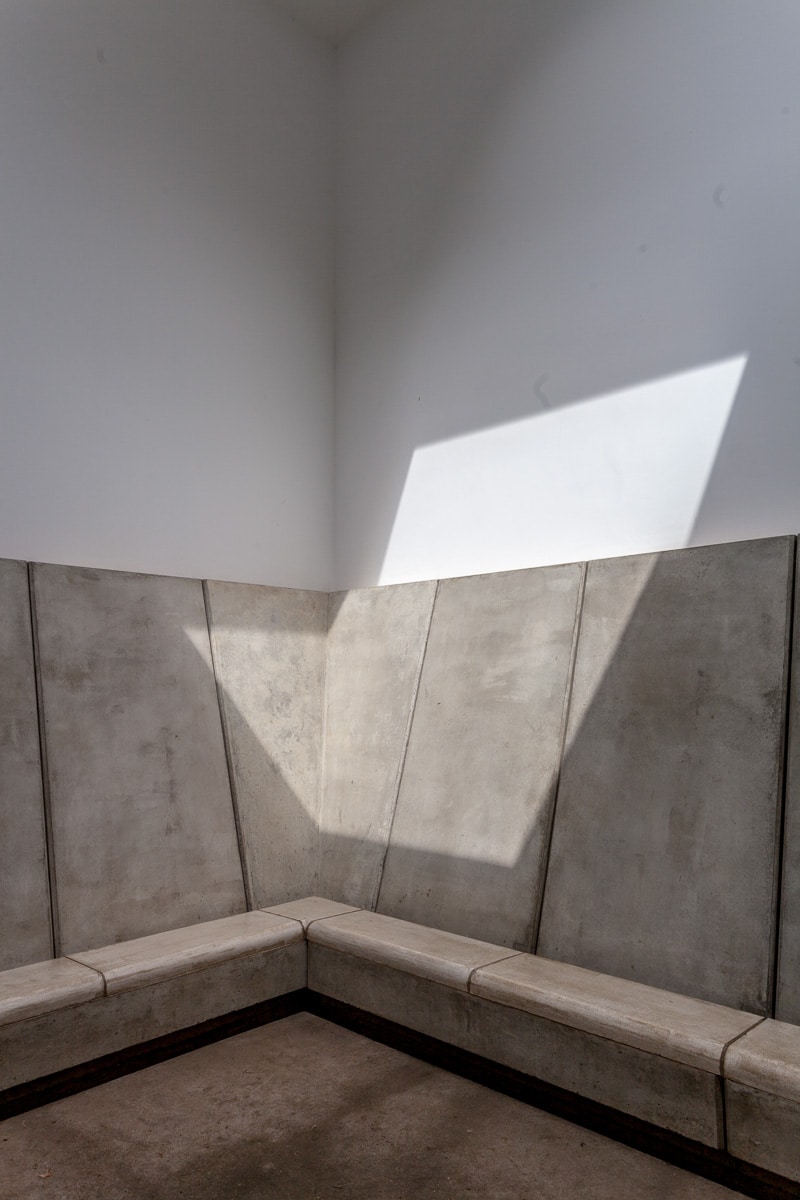 Located on 500 acres of rolling parkland, Yorkshire Sculpture Park is one of the largest sculpture parks in the world, and the setting is beautiful. A huge number and variety of works are permanently scattered over the peaceful, rural landscape, together with some galleries that contain temporary exhibitions.

The work of two artists were of particular interest. Of course we were interested in the large Andy Goldsworthy works, but Skyspace by James Turrell, a quiet, empty, enclosed space that features an aperture in the ceiling open to the sky was one work that we actively sought out.

When we arrived we expected to spend only a couple of hours at the Yorkshire Sculpture Park, but ended up taking over five hours and left feeling we could have stayed much longer. But we needed to get to York. 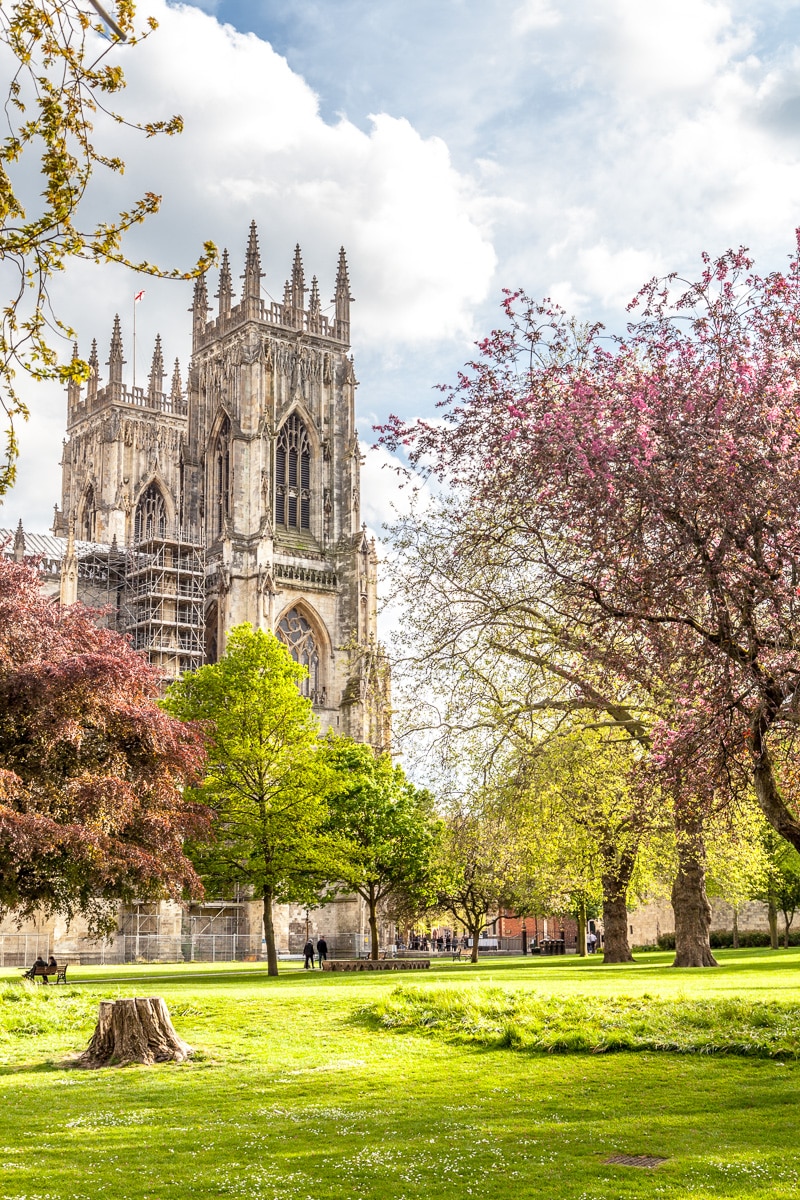 After about another 1+ hour drive, we checked into our hotel and made our way into the old town within the old medieval walls. Once in the old town we walked around the massive, beautiful York Minster or the Cathedral of York. There have been churches on the site since the 7th Century AD, and those churches and the entire area then passed through the hands of numerous invaders. Successive wars, conflicts, and fires destroyed various iterations of structures. Building of the current church began in 1220 and was declared complete in 1472.

Even after its completion, subsequent conflicts, arson, and fires, the most recent being in 1984 that destroyed the roof in the south transept, have meant that the structure has seen a great deal of rebuilding and preservation work over the years. Yet it is a beautiful structure that stands out as a landmark from across the city. 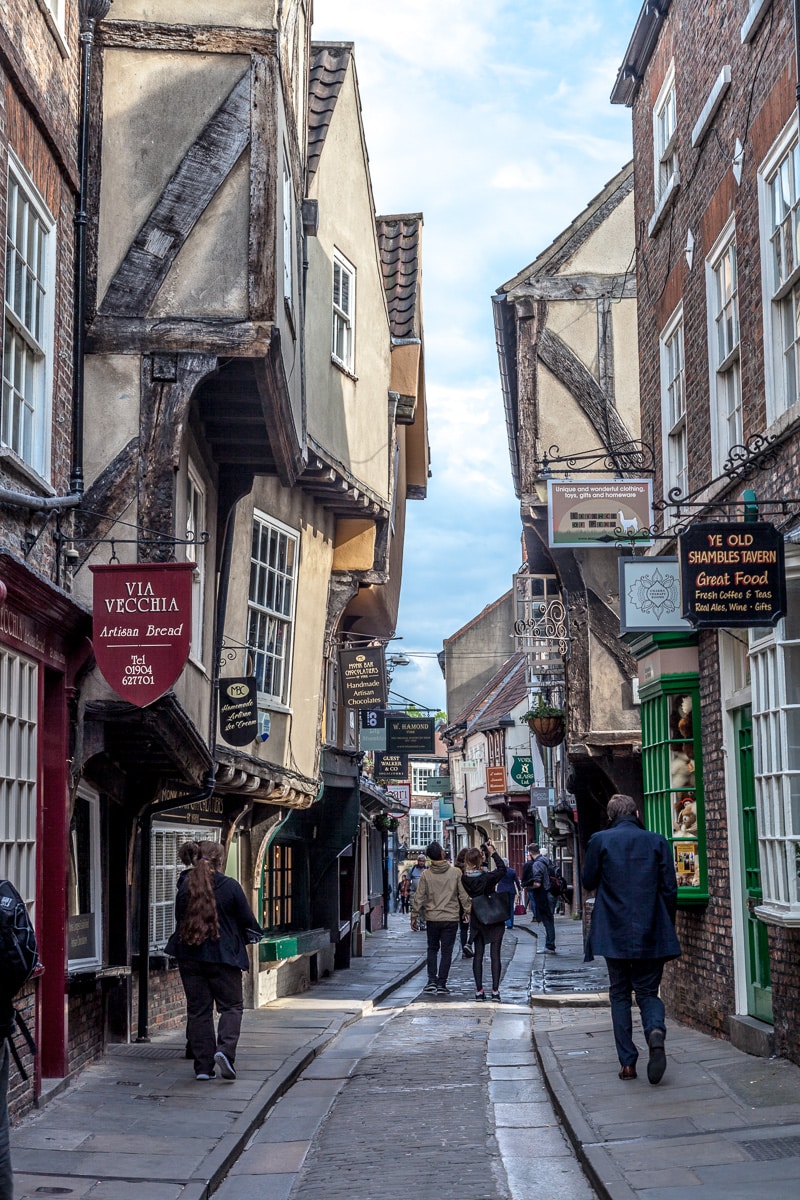 Over the remainder of the evening and the next day we wandered the narrow medieval streets in between ancient, half-timbered buildings that leaned precariously over the cobble-stoned lanes. Our walks included the “Shambles”, a narrow medieval street, now lined with shops, boutiques and tea rooms. Originally this street was lined with butchers’ shops, the hooks from which carcasses were hung and the shelves on which meat was laid out can still be seen outside some of them. Another feature of the old town are narrow pedestrian passageways called “Snickelways” many of which lead to former market-places.

The city walls incorporate part of the Roman fortress, some Norman and medieval sections, as well as 19th- and 20th-century renovations. The 4 km | 2.5 miles of walls are the most complete in England. 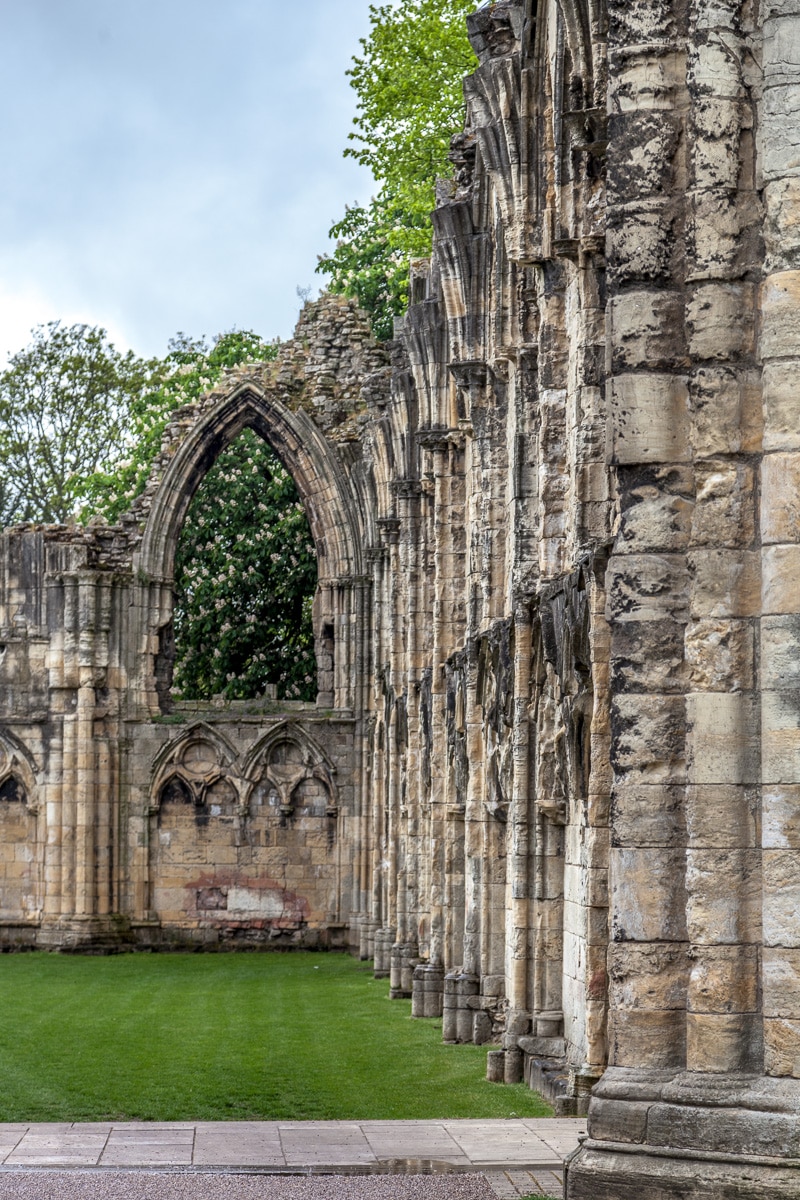 While on a walking tour, we visited the ruins of St. Mary’s Abbey in the gardens of the Yorkshire Museum. For 450 years St. Mary’s Abbey, was one of the most powerful and wealthiest Benedictine monasteries in the north of England and its abbots were famously decadent. The abbey featured prominently in the early medieval ballads of Robin Hood, with the abbot often as Robin Hood’s archenemy. In 1539, the monastery was dissolved under the orders of Henry VIII, its wealth confiscated, and its buildings destroyed.

The remaining parts of the structure and the outline of the foundation on the ground give an indication of the size and grandeur of the building. 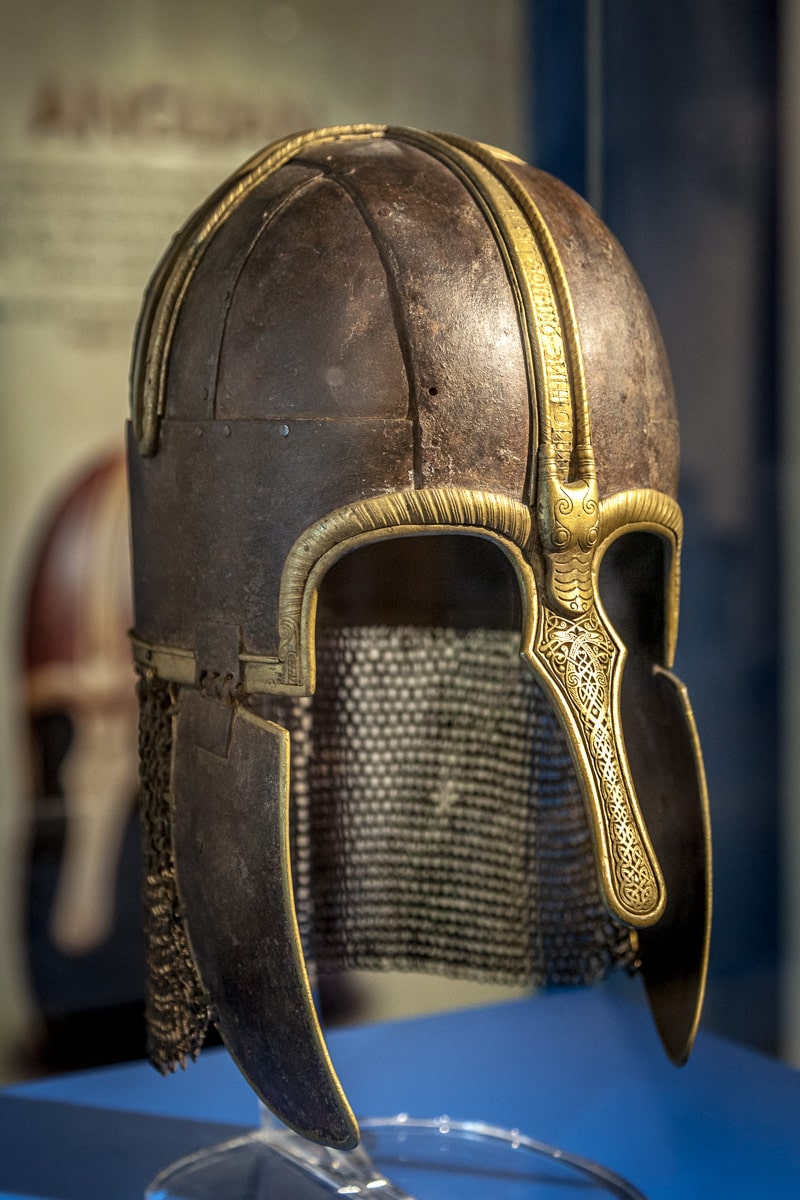 The Yorkshire Museum itself was certainly worth the time to visit as well. Exhibits documenting the natural history of the area as well as the prehistoric age up through the Roman era and continuing up to modern times. Among many other treasures, the York Helmet is on display, The 8th-century Anglo-Saxon, iron and brass helmet was discovered in 1982, when it was nearly struck by a backhoe.  Luckily the operator stopped to check when he hit something hard – the wooden chest containing the helmet and other artifacts.

We walked into some of buildings currently occupied by the Department of Archaeology of the University of York. One of the most interesting, the King’s Manor was originally built in about 1270 as the Abbot’s House of St Mary’s Abbey, and later served the Tudors and Stuarts as a seat of government. 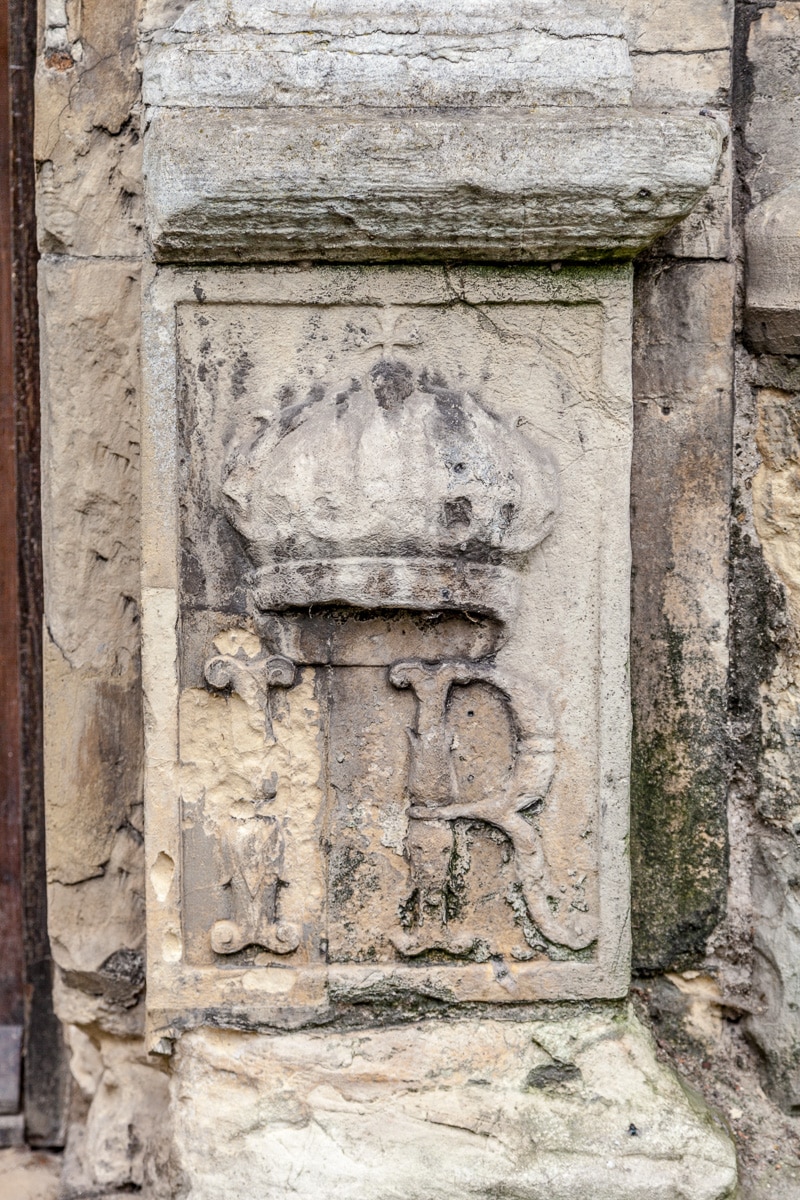 In several places around the King’s Manor we were puzzled by the letters IR carved in the stone around the doors and other places of prominence. We were aware of the use of ER, for example, which stands for “Elizabeth Regina”, but these buildings were from the time of King James (Ist  and VIth ). As it turns out the IR is “Iacobus Rex”, where Iacobus is Latin for James.

Curiously, also within the building we were shown some old graffiti – names of pre-Victorian era schoolgirls scratched into the window panes in the dining hall, one dated 1813. 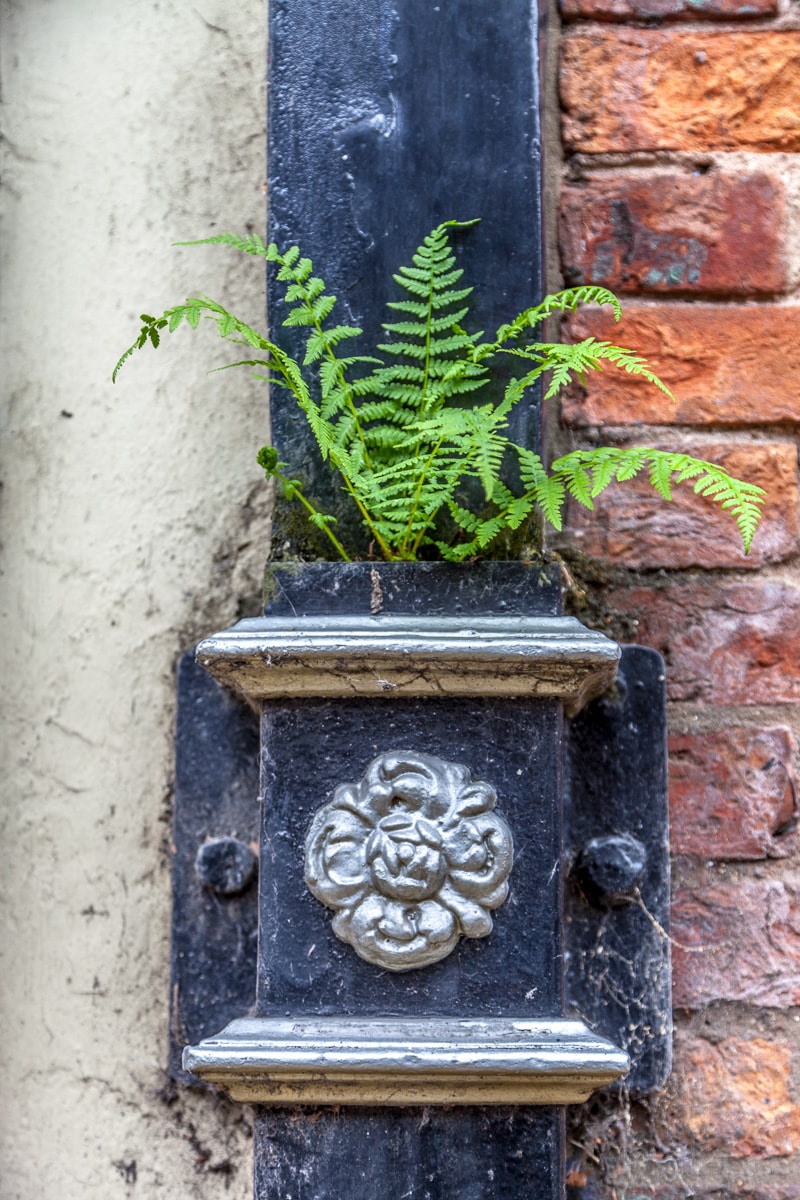 The remainder of the day we continued to wander the old town along cobble-stoned streets dodging light rains that blew through occasionally. During one such shower we stopped in the Golden Fleece pub, known as the most haunted pub in the country. While I’m no authority, I do know that while there my beer disappeared. 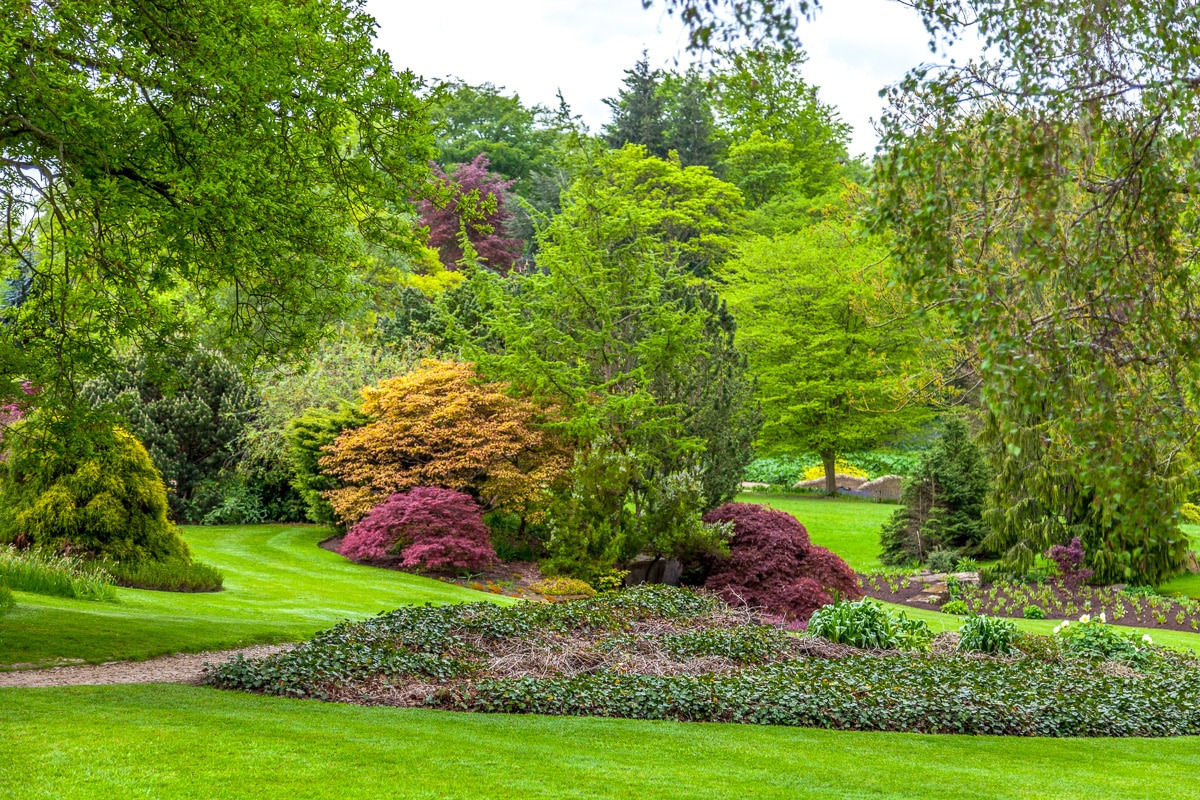 The next morning, it was time to return to Waddington. But there was one more stop to make – the Royal Horticultural Society (RHS) Garden Harlow Carr, near Harrogate. The 23.4ha (58 acres) gardens stand on what was once part of the Forest of Knaresborough, an ancient Royal hunting ground. As a picture is worth a thousand words, I’ll let the photographs tell the rest of this story.

After a busy couple of days, it was good to be home. Once we had settled in and ate a good dinner, sleep came early, and we dreamt of adventures to come.