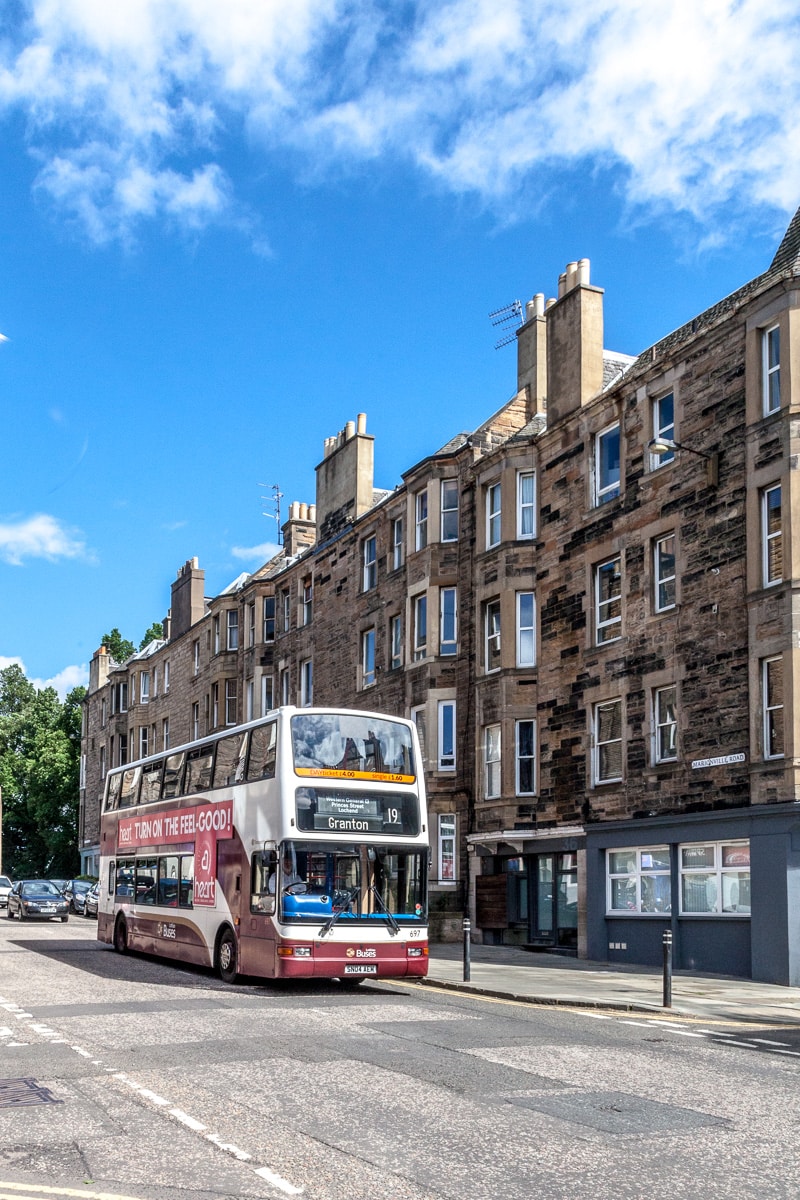 Our Edinburgh bus pass allowed us to hop on and off buses throughout metropolitan Edinburgh. It affords a slight discount and provides a great convenience when traveling about. The bus system allowed us to make day trips to places too far to walk to, but too close for a train.

It’s fun figuring out transportation systems, whether they be trains, buses, roads, or walking, and just because they are in your native language doesn’t necessarily mean that it is any easier to understand.  But it’s still fun. 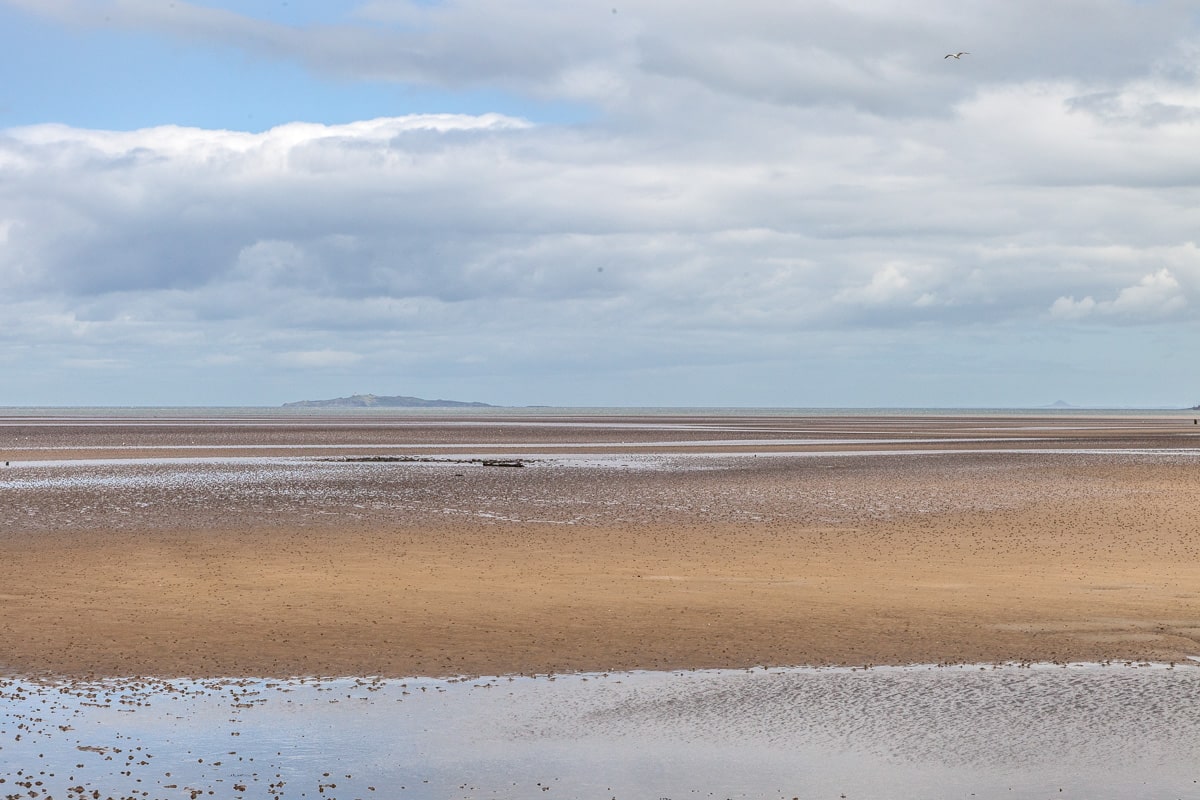 The Firth of Forth … other than being fun to say, and easy to make jokes with, is the large estuary (firth) of the River Forth located just north of Edinburgh, connecting directly to the North Sea. Geologically, it is a fjord created by glaciers during the last Ice Age. It isn’t far or difficult to reach, so it was worth a few bus rides to go for a few visits. 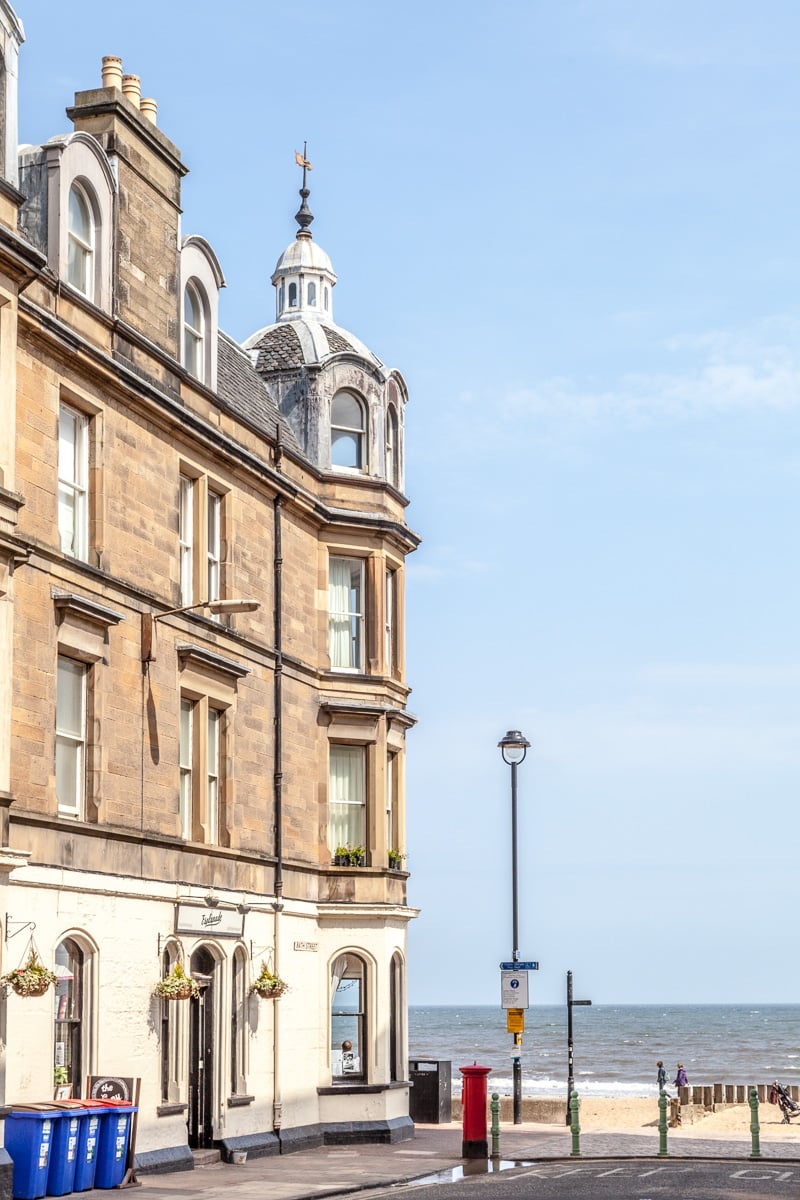 We had heard that the coastal town of Portobello had a Saturday market. Having been somewhat disappointed with the few markets we had encountered in Ireland and England, we were eager to see what was offered, especially compared to the lively markets we experienced in Italy, Spain and in France in particular. Of course the seasonality of fruits and vegetables in these northern countries was mostly responsible for the lack of produce, but there are likely cultural reasons as well.

Be that as it may, after making our way to the center of the town of Portobello and finding the little market, we took only a couple of minutes visiting the few vendors. Our hopes had been slightly elevated, and somewhat saddened we decided to head to the “beach”. 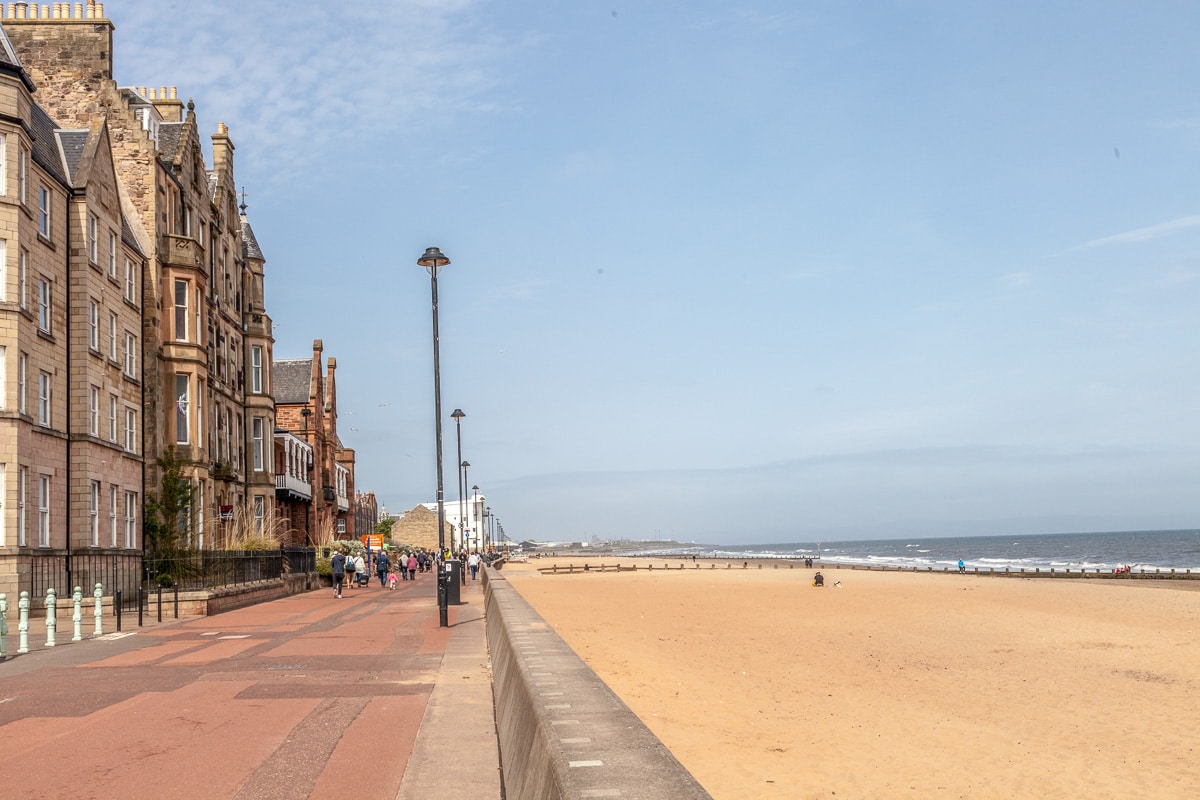 Portobello was once known as a grand beach resort. Facing the Firth of Forth, in eastern central Scotland it is now a residential suburb of Edinburgh, with a promenade facing the wide sand beach, its amusement park atmosphere and rides have long since disappeared.

However, in the 18th century, it was a haunt of seamen and smugglers. Then during the 19th century, like so many towns it became an industrial town, manufacturing bricks (the “Portobello brick”), glass, lead, paper, pottery, soap, and mustard. 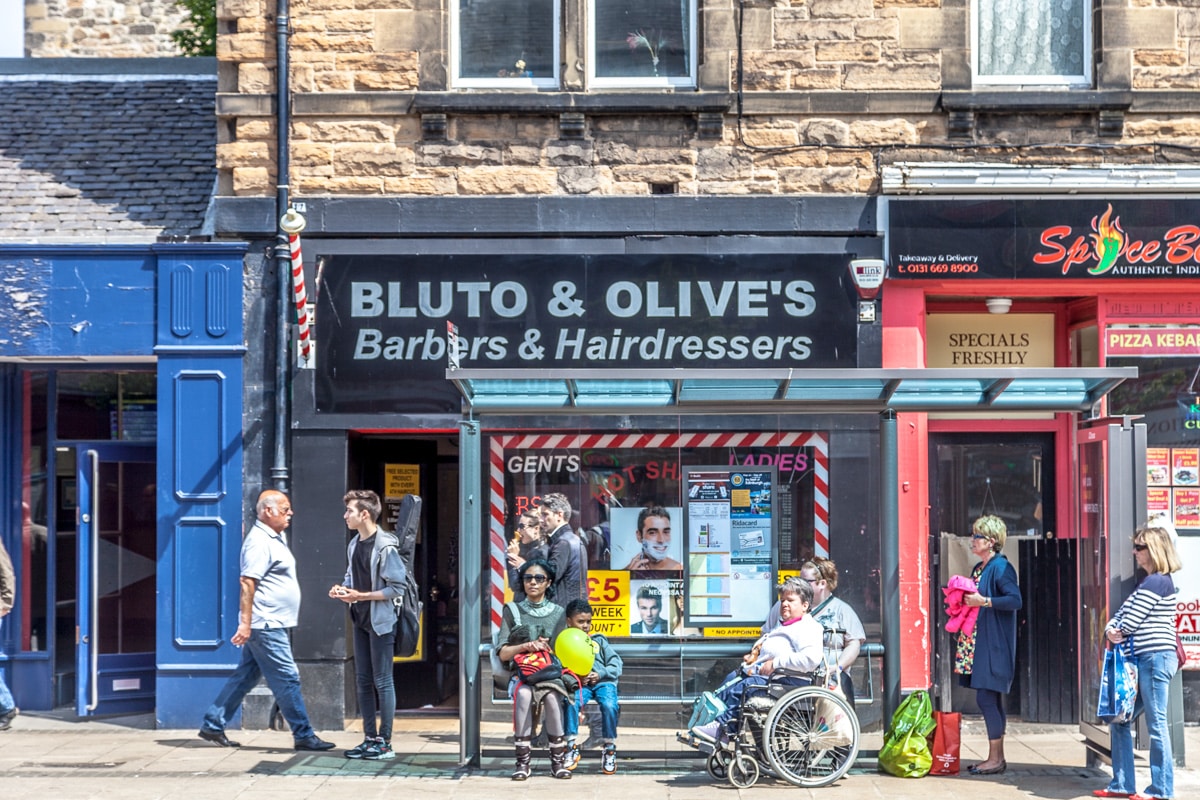 It evidently peaked as a beachside resort in the late 19th century, and declined throughout the 20th century. Prior to its current revival, Portobello’s attraction was mainly limited to the inhabitants of Edinburgh and, to a lesser extent, Glaswegians.

Today it is an attractive and a little quirky, seaside community. The day we were there was bright, sunny, and we thought rather cold, though we were bundled well in contrast to the Scottish natives, many in short pants and t-shirts. 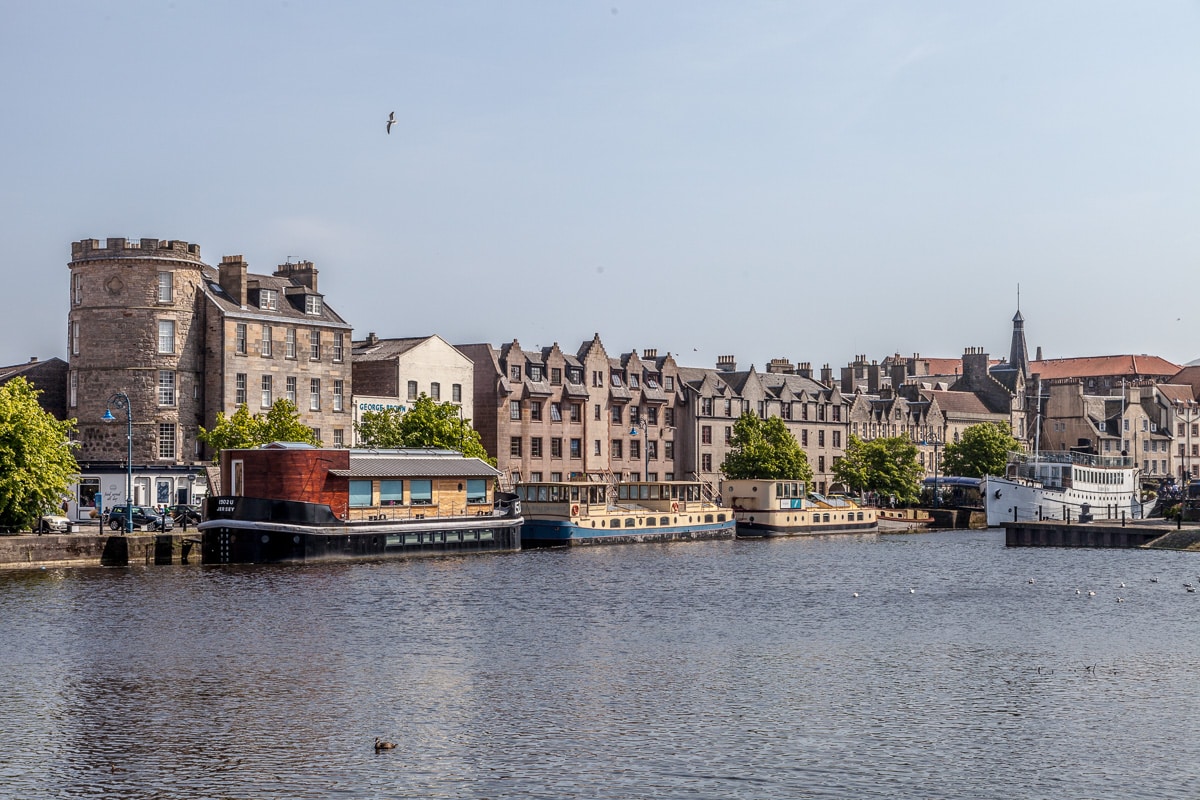 After a lunch at The Blue Bean Coffee House, a small, local cafe, we decided to take the bus to Leith, the ancient port for Edinburgh. Leith has a long history of maritime trade since medieval times. Though the glory days of Leith as a major port are gone, it has many popular dockside restaurants, bars and shops with a distinctive charm and lively vibe.

Not far from the old center of Leith, there is the more modern harbor with a vibrant shopping area. The main attraction there is the Royal Yacht Britannia, the British Royal Family’s former personal vessel, but more on that in a future post.

While in Leith the sun was warm in spite of the cool air temperatures. We stopped at the Leith beer company, a local pub, and located a seat at the edge of the sunlight, but shortly after getting our drinks, the sun edged just behind the building behind us. Fortunately, a couple of local, young, gentlemen offered us to sit with them at their sun-bathed table. We had a delightful conversation with Robert & Gary, and they gave us many useful tips and advice about Edinburgh. 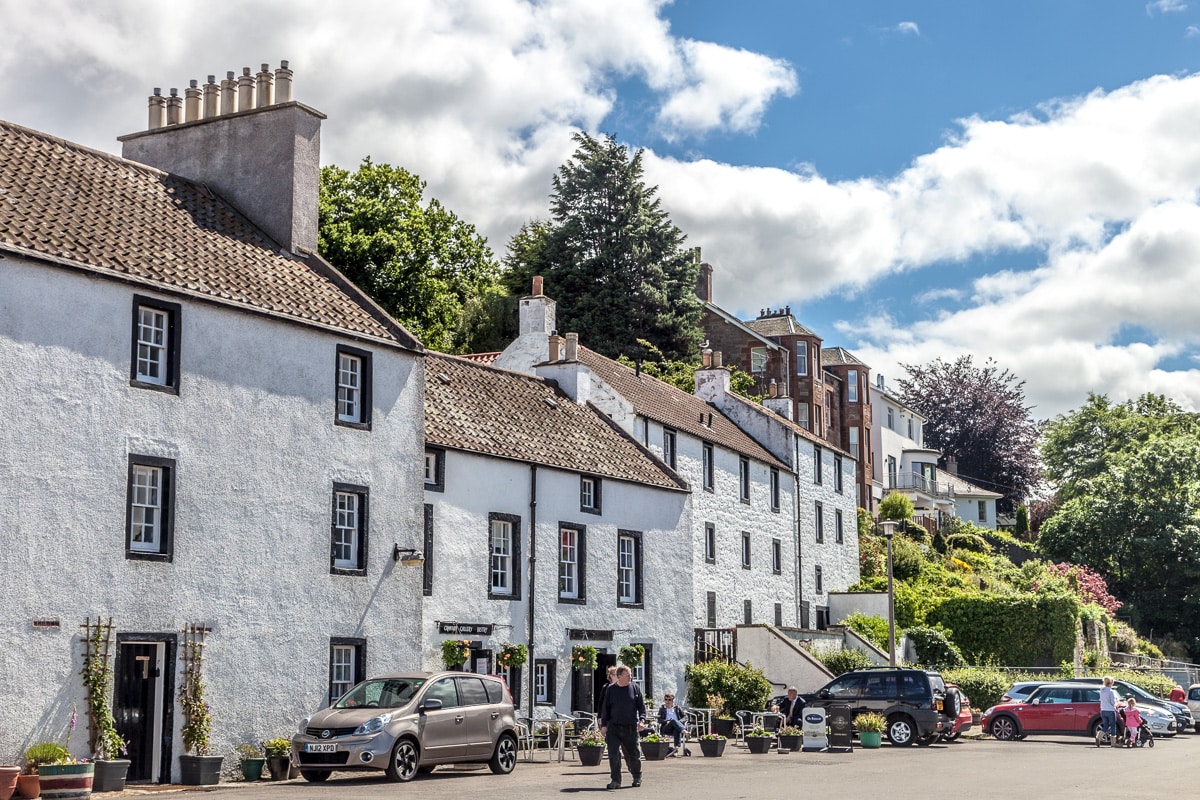 On another day we took the bus to the village of Cramond, also on the shore of the Firth of Forth.

Long after the end of the Ice Age, the Cramond area continued its long history, with evidence of Mesolithic, Bronze Age and Roman activity. Archaeologists uncovered evidence of habitation dating as early as 8500 BC.

A Roman-era settlement and fort was established around 140 AD and had periods of occupation until around 211. But, after the departure of the Romans, little is known about Cramond for several centuries. 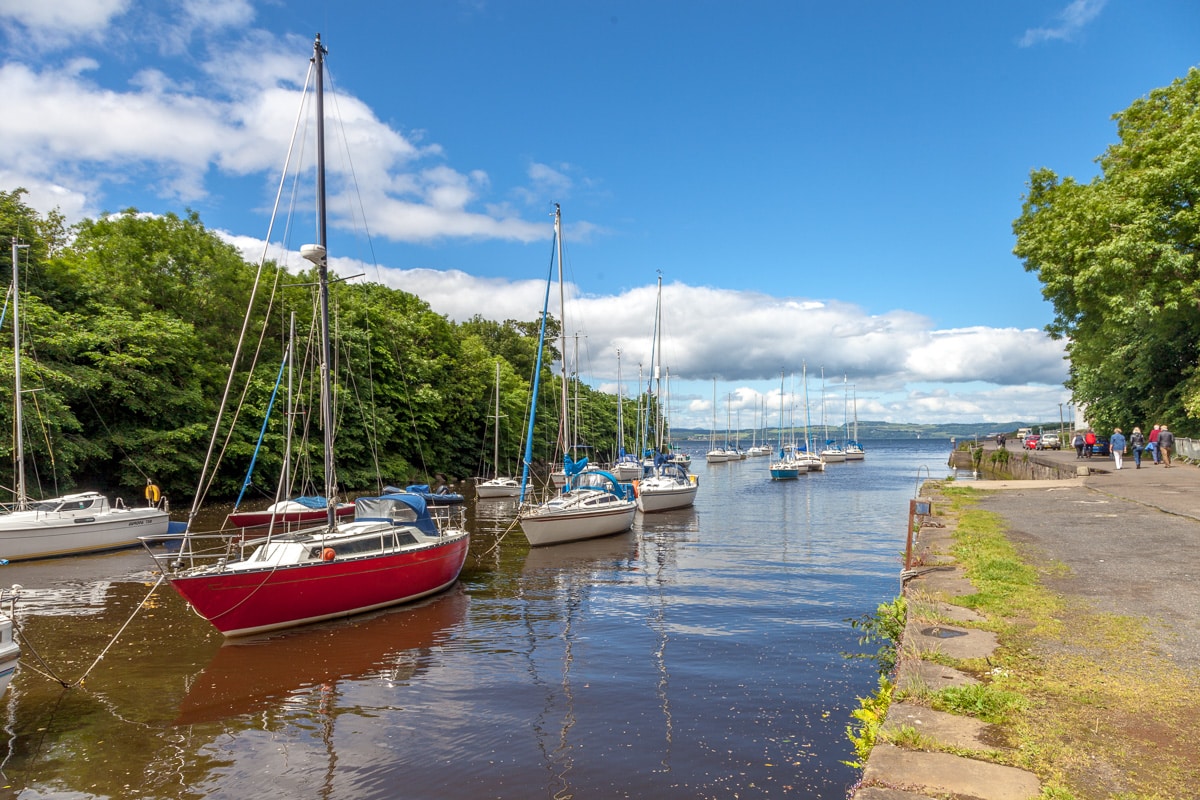 Cramond grew slowly over the years. Cramond Kirk (church) was founded in 1656, in the late 18th and early 19th centuries became an industrial center, by the late 19th century it became and still is a fashionable suburb of Edinburgh in spite of its being under the flightpath of the nearby airport. With its village atmosphere; the beach with shoreline walks; a path along the River Almond; and the harbor in the mouth of the river Cramond was a great place to spend a good part of the day.

In fact any of these small towns were worthy of more time and visits, and though we did get to Leith and Cramond more than once, there was still a desire to return. If there just wasn’t so much else to see.