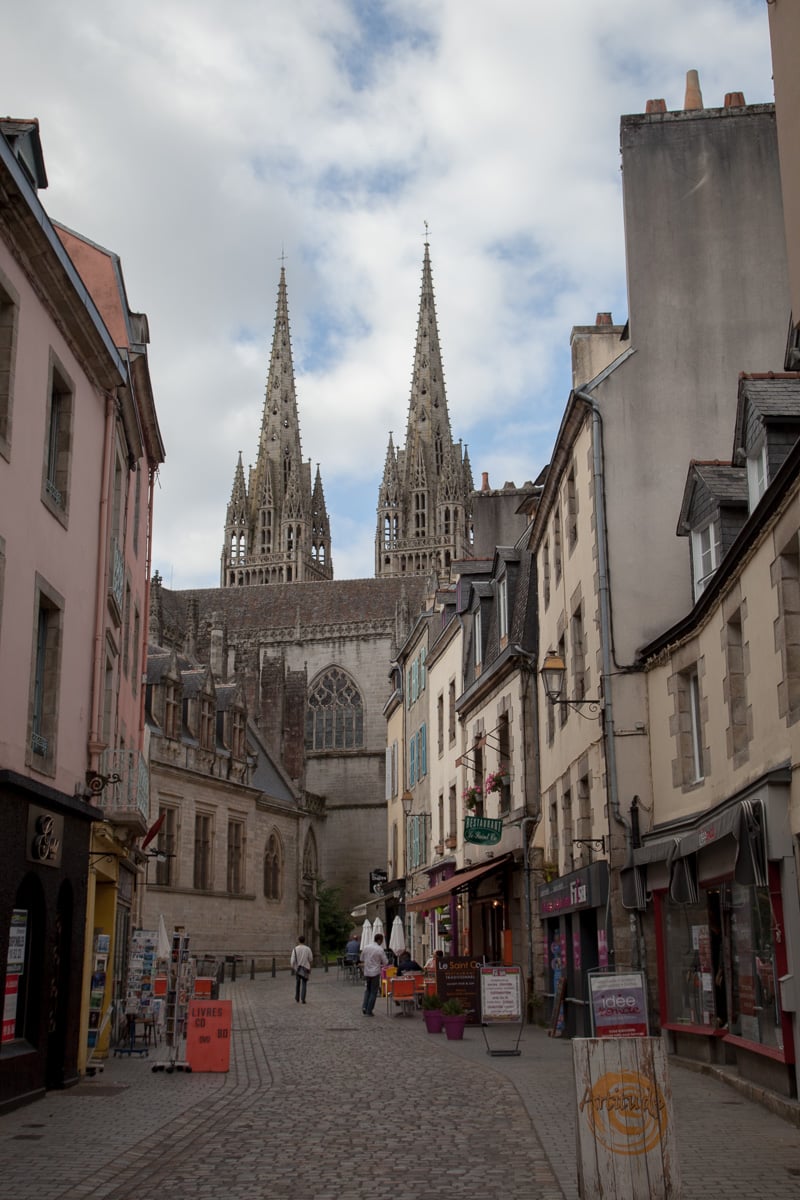 As we close in on our final days in Rennes, we felt drawn to explore more of Brittany (French: Bretagne; and Breton: Breizh). Bordered by the English Channel to the north, the Celtic Sea and the Atlantic Ocean to the west, and the Bay of Biscay to the south it is an ancient land. The region has a strong Celtic heritage that sets it apart from the rest of France. Celtic traditions are alive or recalled today in Breton folk music, its Celtic festivals, and its many prehistoric monuments. And yet Bretagne itself is very diverse. We wanted to have our own taste of this special area of France.

Our trip started with a train from Rennes west to Brest, then south to Quimper (sort of pronounced kam-pear). Since we arrived just at the end of the lunch hour, our chances of getting something more than just a sandwich were slim. As we wandered down the street across from the train station (gare) the options were not appealing, when Jeannie saw a sign that pointed through an arch and down an alley to a small creperie Chez Mamie. It appeared bright and cheerful, had lots of flowers around the windows, and as we approached there was the sound of a large parrot coming from one of the windows.

We entered and said bonjour to the young lady behind the counter of the completely empty restaurant. She quickly told us, in French, that lunch was over and she was closing. However, as soon as we opened our mouths, she asked if we spoke English. We said yes and she apologized that all that was left was a couple of slices of a “courgete” (or zucchini) tarte, home made by her from locally grown produce. We happily said it would be fine, and along with a side salad it was a delicious and healthy lunch. Then she announced that she has left one of her crepe griddles on so that she could make us one of the best caramel crepes in France. She was right. It was light and thin with crispy edges, lots of the salted butter that Bretagne is famous for, and her own caramel that was drizzled over the final folded dessert. Merci Gulie. 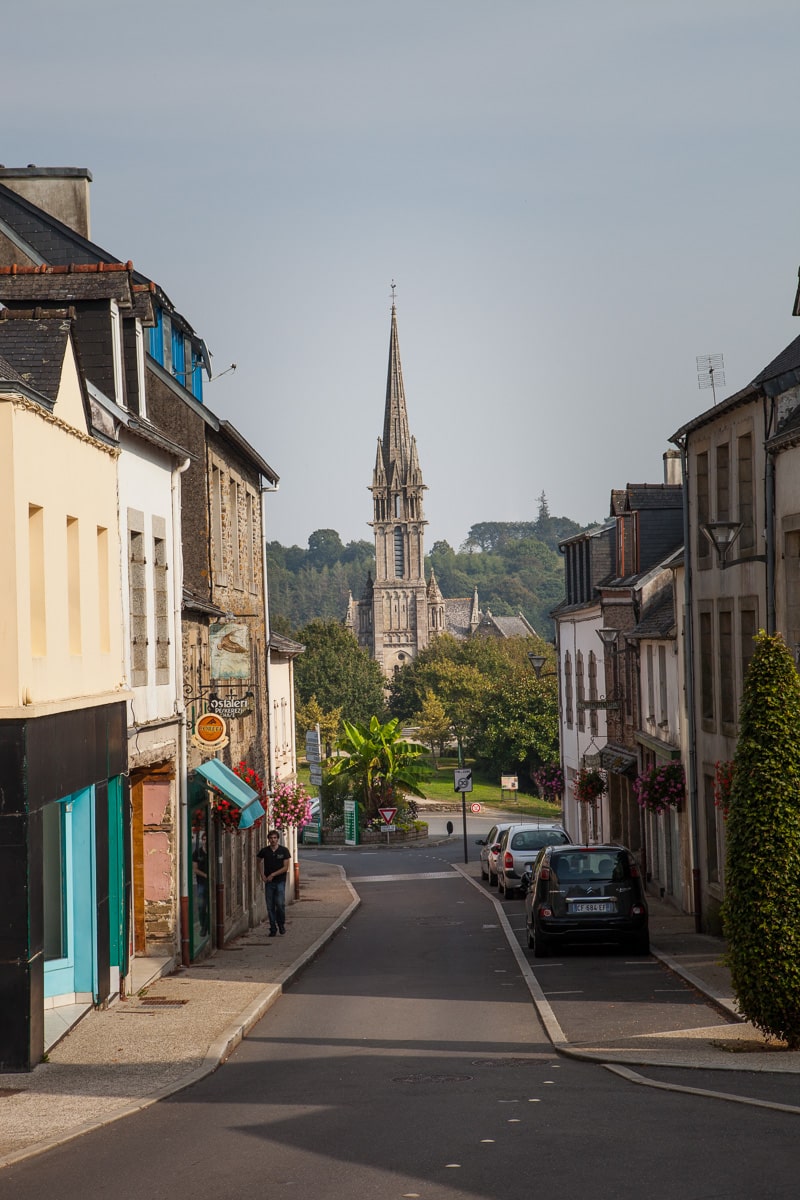 nce we had eaten, the next step was to walk to the car rental to get our car, as public transportation is sparse out in the rural areas. The entire process through EuropeCar was easy and inexpensive (except for the insurance which, since we no longer own a car, we needed to purchase). I hadn’t driven in over a month, and I was now on French roads in our tiny Fiat 500, but I had been studying the signs and the traffic circles, and being out in the country, there were fewer other cars. Fun and beautiful. 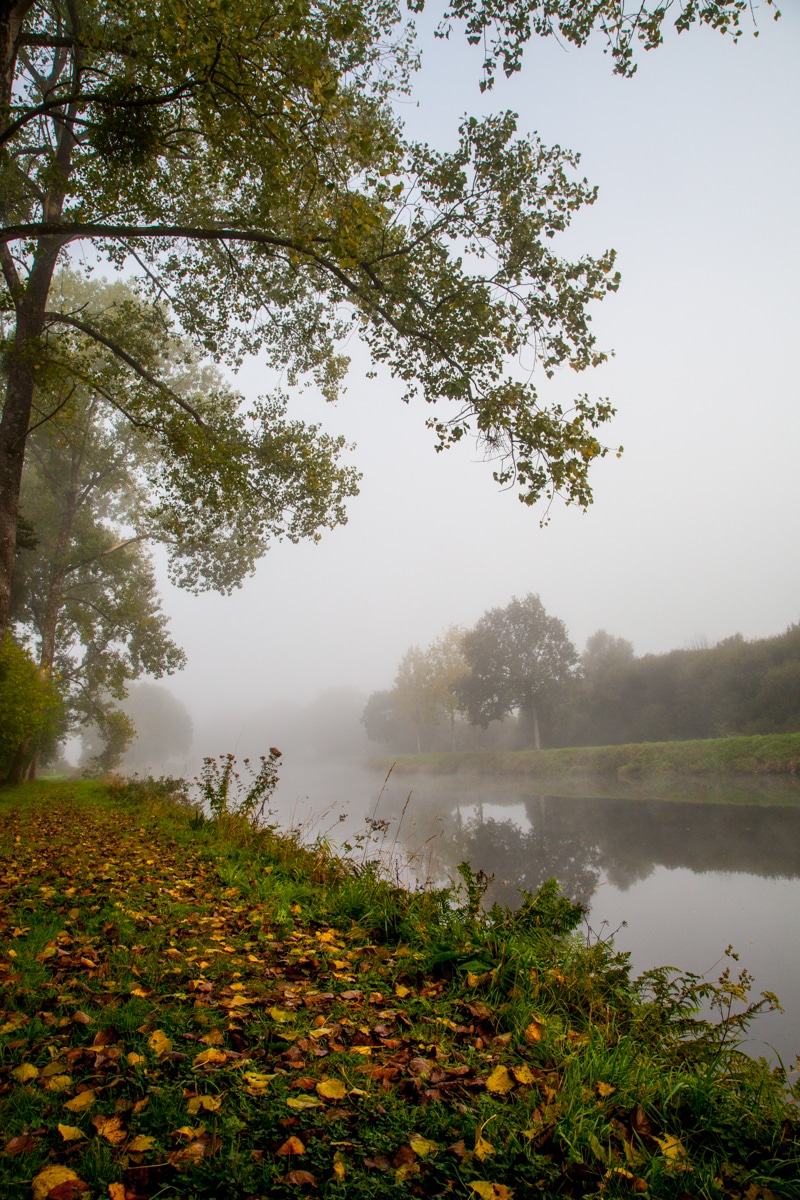 We only got a little off track (the road signs in Brittany are bilingual, in French and Breton) on our way to Châteauneuf-du-Faou, where we strolled the town while waiting to check in to Stang Korvenn our B&B a few miles more down the road.

When we arrived at Stang Korvenn we were warmly greeted by owners Bryan and Jilly into their “ … riverside haven in Brittany.” We felt as if we had known these two British expats for years, and looked forward to being in this beautiful part of France for a few days.

After a delightful meal in Châteauneuf-du-Faou at the only restaurant that was open, we returned to the B&B, and said good night. It was cool, quiet and dark, and deep sleep came quickly.