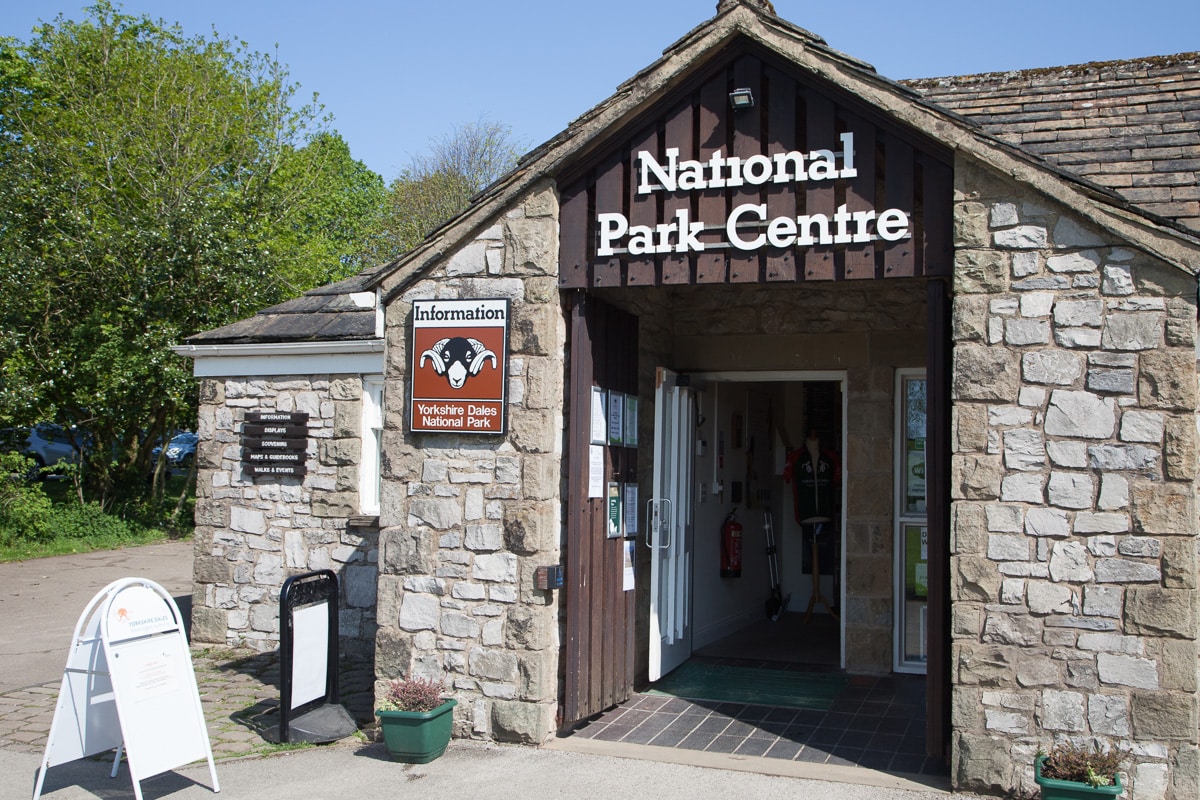 When we rented our car for the last three weeks of our time in Northern England, there were three places that we wanted to be sure to go. These were places that all the locals advised us were special. Of course everyone had a different, long list, but these three came up on almost everyone’s short list.

First, was Malham Cove and Gordale Scar in the Yorkshire Dales National Park. Officially designated as a National Park in 1954, Malham National Park Centre was where we began the day’s hike. 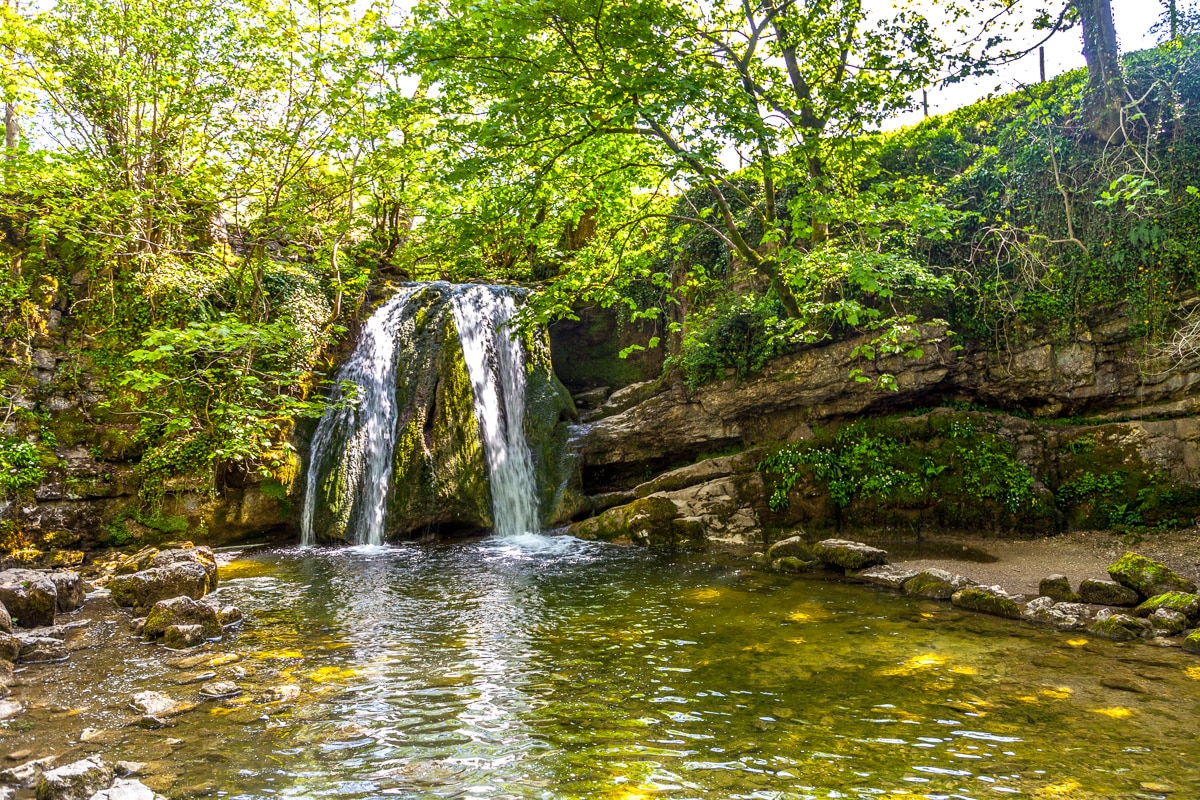 Our first destination of only a part of the network of trails in this area was about 1 mile (1.6 km) northeast of the charming village of Malham, and is known as Janet’s Foss. Nestled in a wooded glen along the footpath to Gordale Scar, its name “Janet” refers to a fairy queen believed to inhabit a cave behind the fall, and Foss is of Scandinavian origin meaning waterfall (sometimes found as “force” in England). It was a magical place.

Soon after leaving the woods we had been walking through, the terrain opened onto broad grassy pastures surrounded by tall hills. Stone walls extended all about, up and over the hills to the distance. The path then led to Gordale Scar, a limestone ravine, containing two waterfalls and overhanging limestone cliffs over 300 ft (100 m) high. 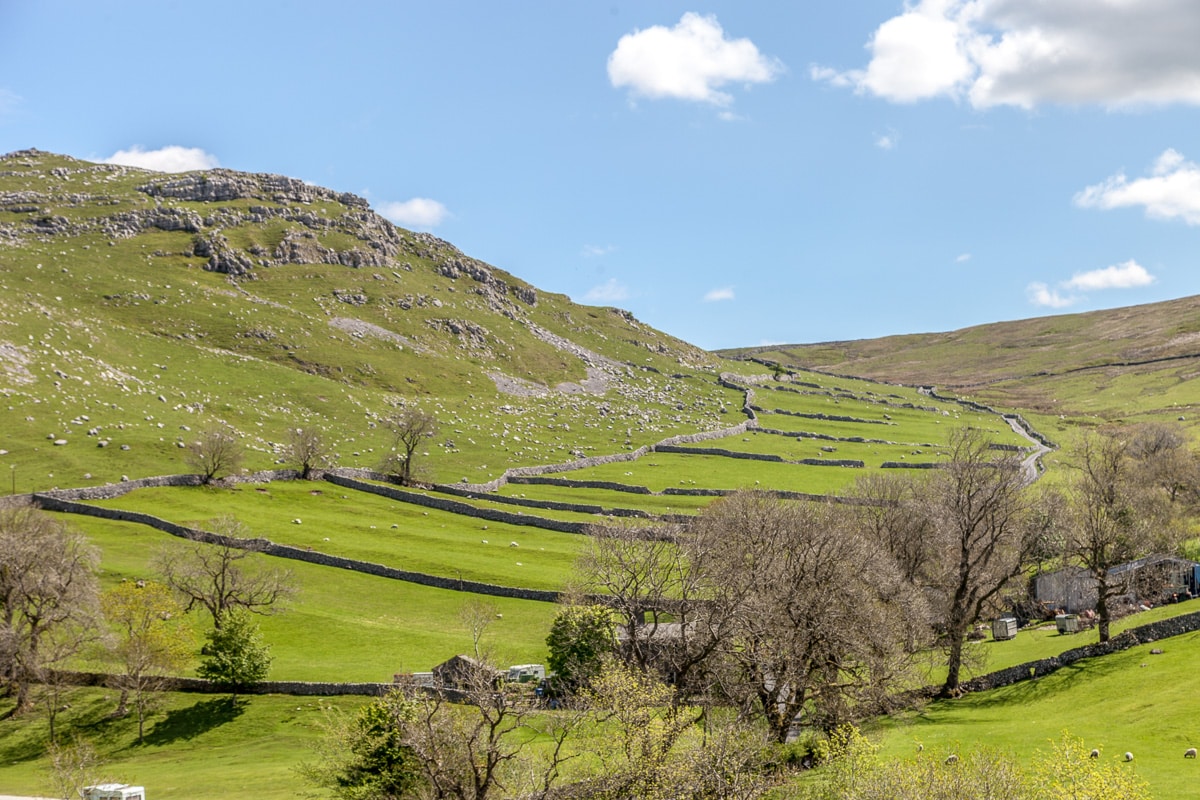 The trail led back out of the ravine and over some large hills to Malham Cove, another impressive rock formation. Malham Cove is a 250-foot high limestone amphitheater formed by ice and water erosion at the end of the last Ice Age. At the top there is limestone pavement, geologically similar to the Burran in Ireland, with its clints (small flat blocks) and grikes (deep crevices between), and an incredible view over the valley. 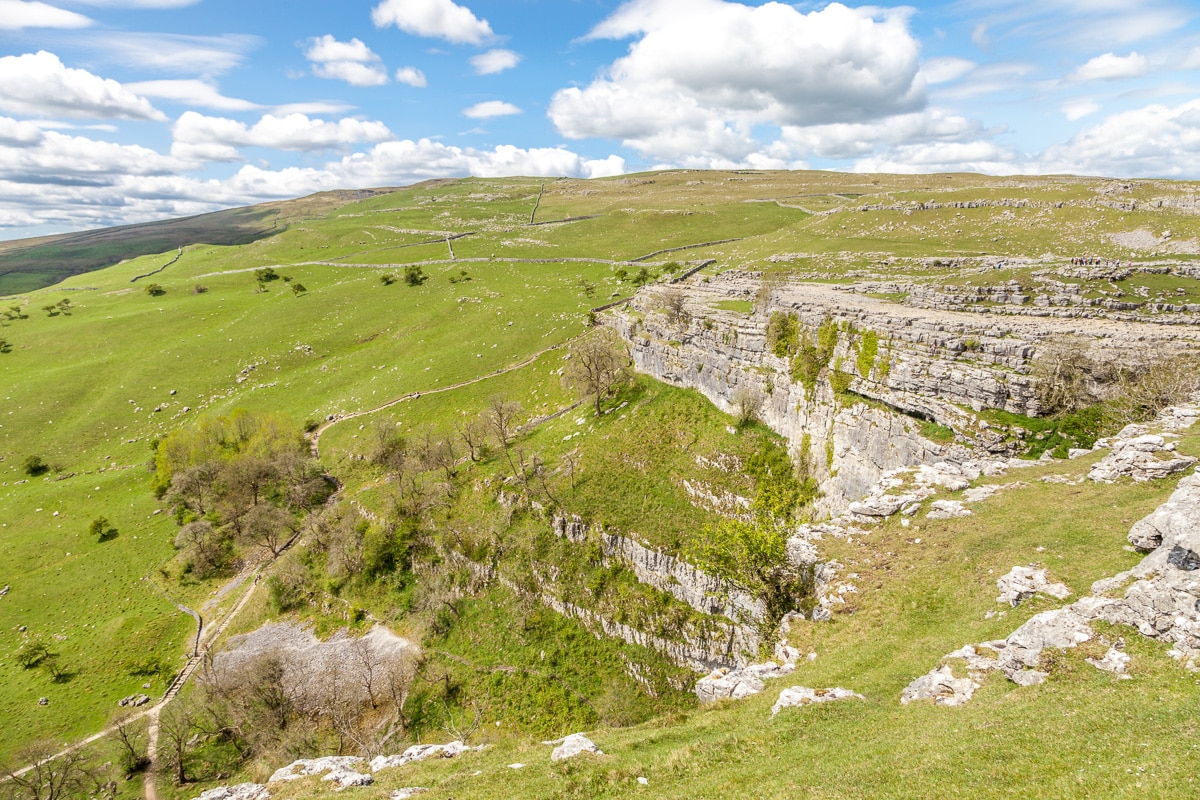 Stopping at the top for a picnic, we saw a man with a spotting scope intently watching something. After a moment or two he came over and asked if we would like to see some Peregrine falcons.  Well, of course we would, and then spent the next several minutes watching an adult Peregrine and two older chicks in a rock crevice across the chasm. 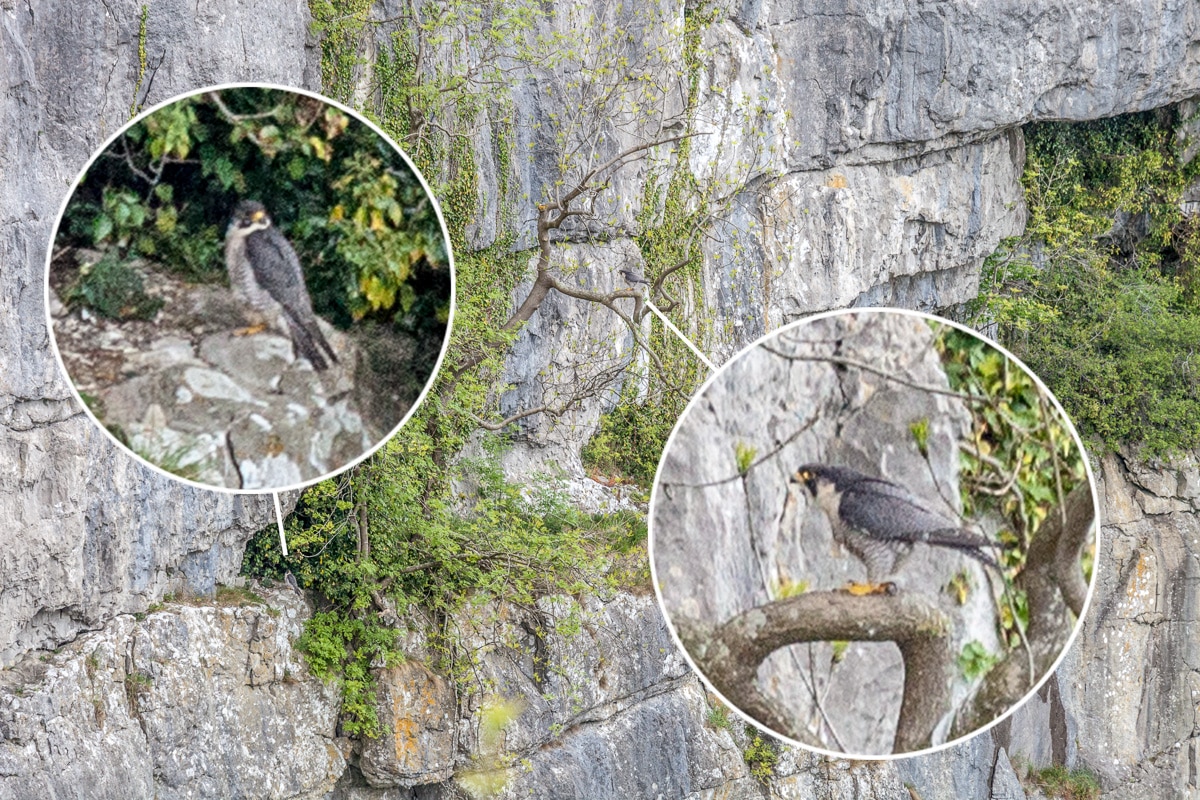 Later, as we crossed the limestone pavement toward the stairs to descend the 500+ steps to the valley floor, we saw, now in a different spot, the two adult falcons resting in some branches of a tree growing high in the rock face. Though it was a little far for my telephoto, one can see them in the images I made.

The walk back to the village was pleasant,  stopping in a small cafe for some tea and a slice of homemade pie. Then after exploring a little more we made our way home. 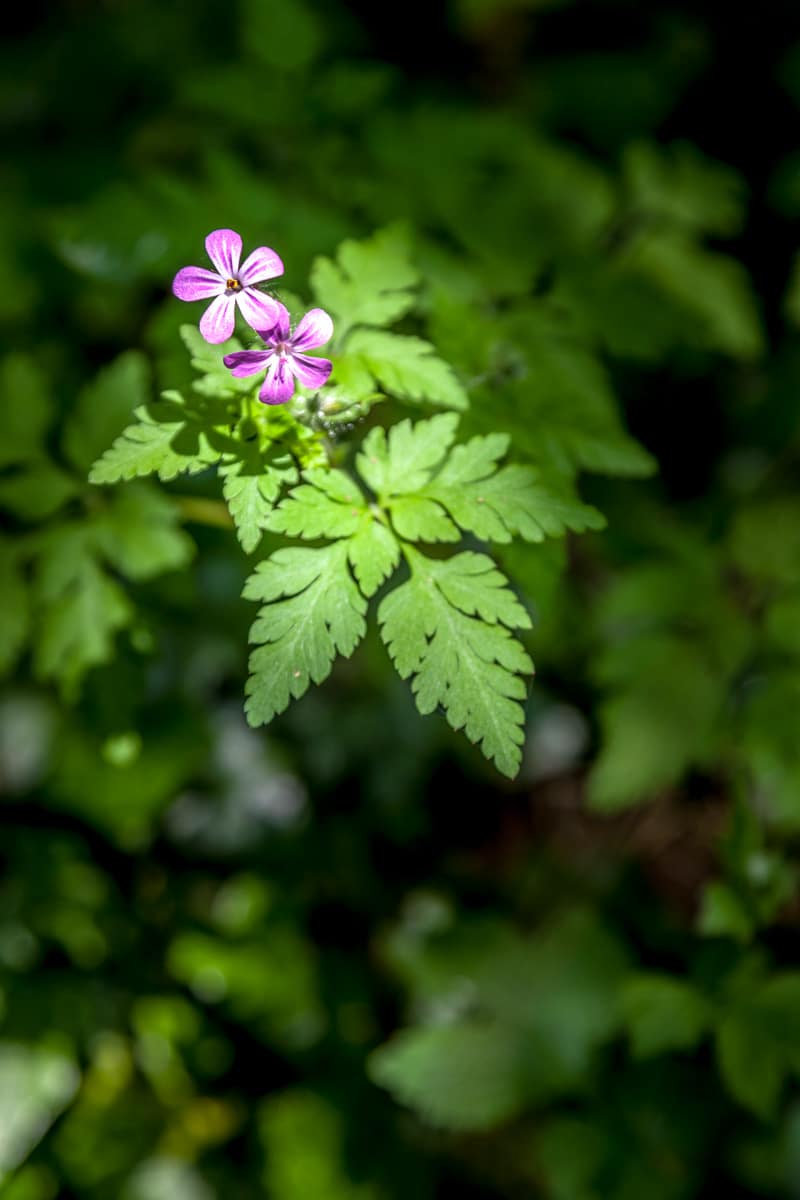 The five-mile long Ingleton Falls Trail began attracting visitors when it first opened in 1885. Thanks to new railroad connections, Victorian-era tourists came by the thousands. The reason for the popularity still attracts walkers and nature enthusiasts.

Well marked trails work their way up along the river Twiss and then return down through a gorge of the river Doe. Along the way there is a rich variety of geological features and plant life at every turn.

There are at least eight major waterfalls or groups of waterfalls, and dozens of smaller ones and cascades. There are so many in some places that are difficult to differentiate. All of the significant falls are named: Pecca Falls, Pecca Twin Falls, Holly Bush Spout and Thornton Force, Beezley’s Falls, Triple Spout, Rival Falls, and Snow Falls. 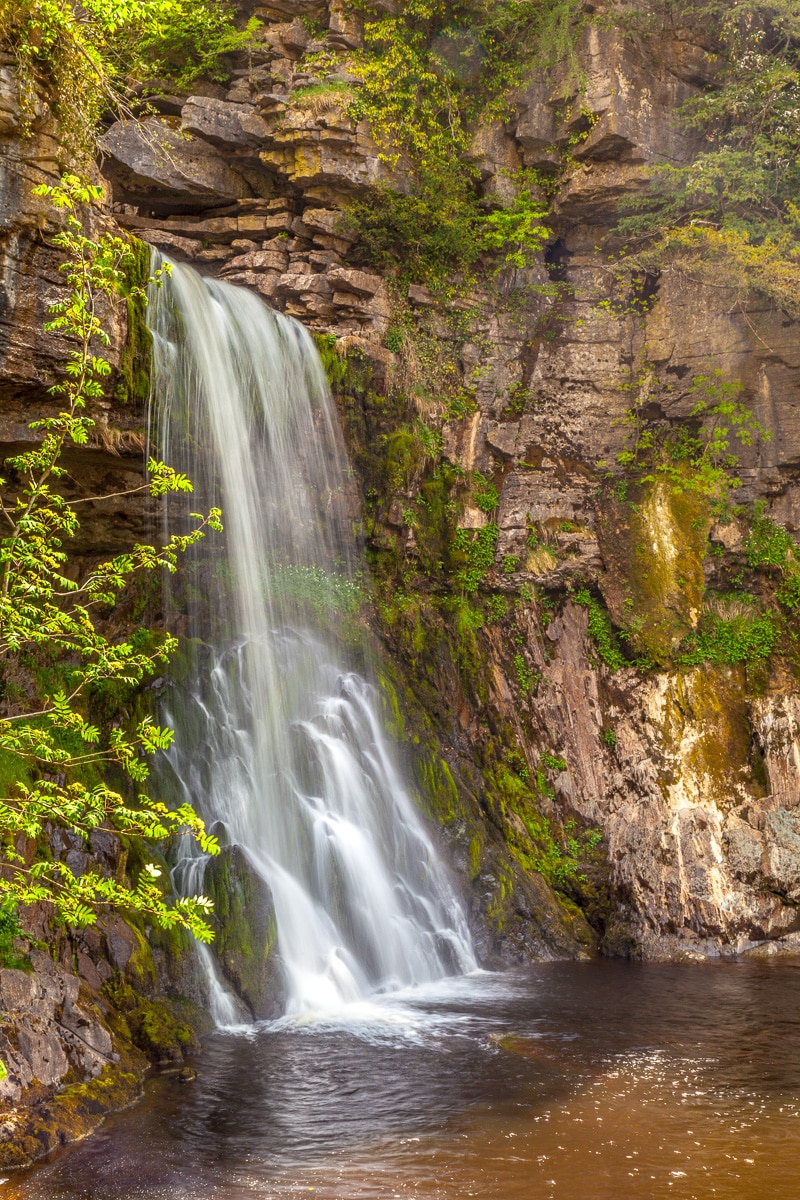 The largest and most impressive is Thornton Force. It is roughly 50ft (14m) high where the River Twiss drops over the ancient limestone rocks laid down 330 million years ago in a sub-tropical sea.

There are several wooded glens cut into the carboniferous limestone that provides a habitat for oak, ash, birch and hazel, and you can discover a variety of smaller plants including many mosses and ferns that thrive in the moist conditions. We even found a beautiful, little, terrestrial orchid as we made our way along the trail. Oh, and we came across one of the best money trees we had ever seen. 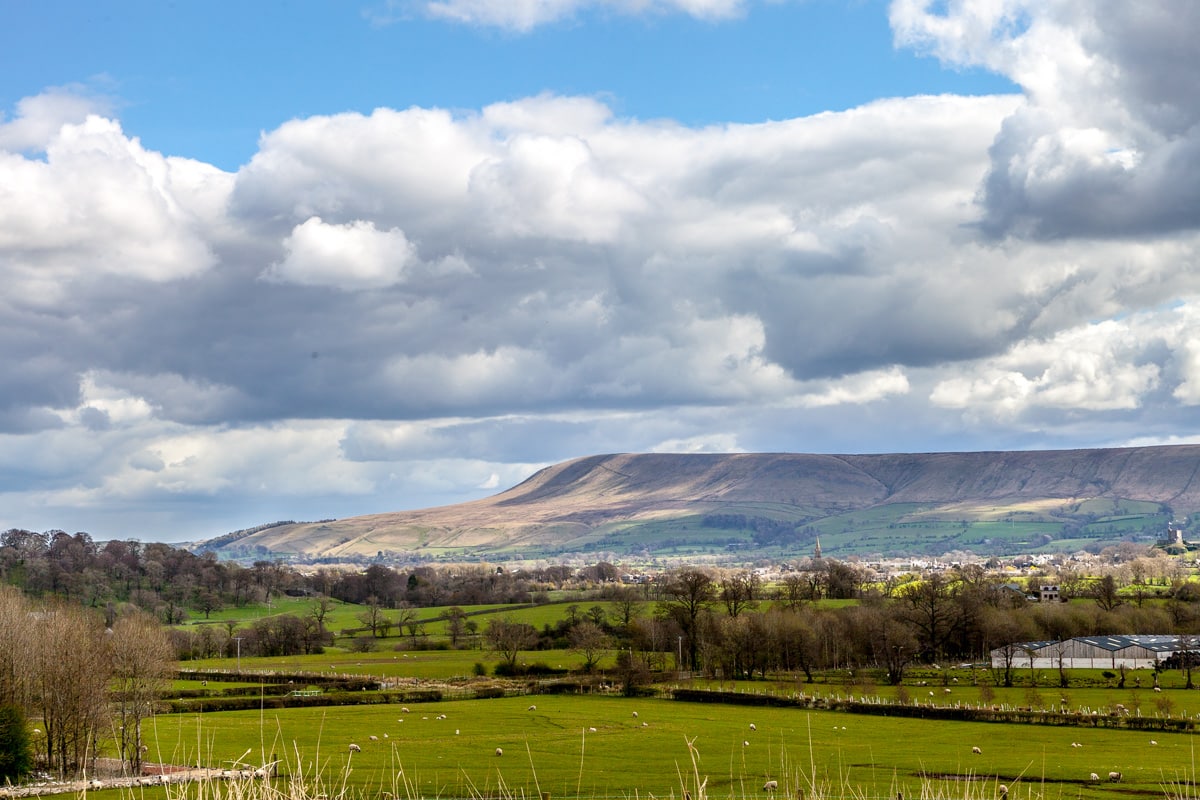 The final destination on the short list, but by no means the least, was Pendle Hill.

Pendle Hill is a mountain by Florida standards, but at 1,835 ft (557 m), it doesn’t quite make it as a mountain since 2000 ft (609.6 m) is the qualifying height. What the hill lacks in height, it most certainly makes up for in a colorful and somewhat gruesome history.

Dominating the landscape and providing a landmark on most of our walks, Pendle Hill’s history dates back as far as the Bronze Age. But it is best known as the home to the “Pendle Witches” and the related events in the early 17th Century. 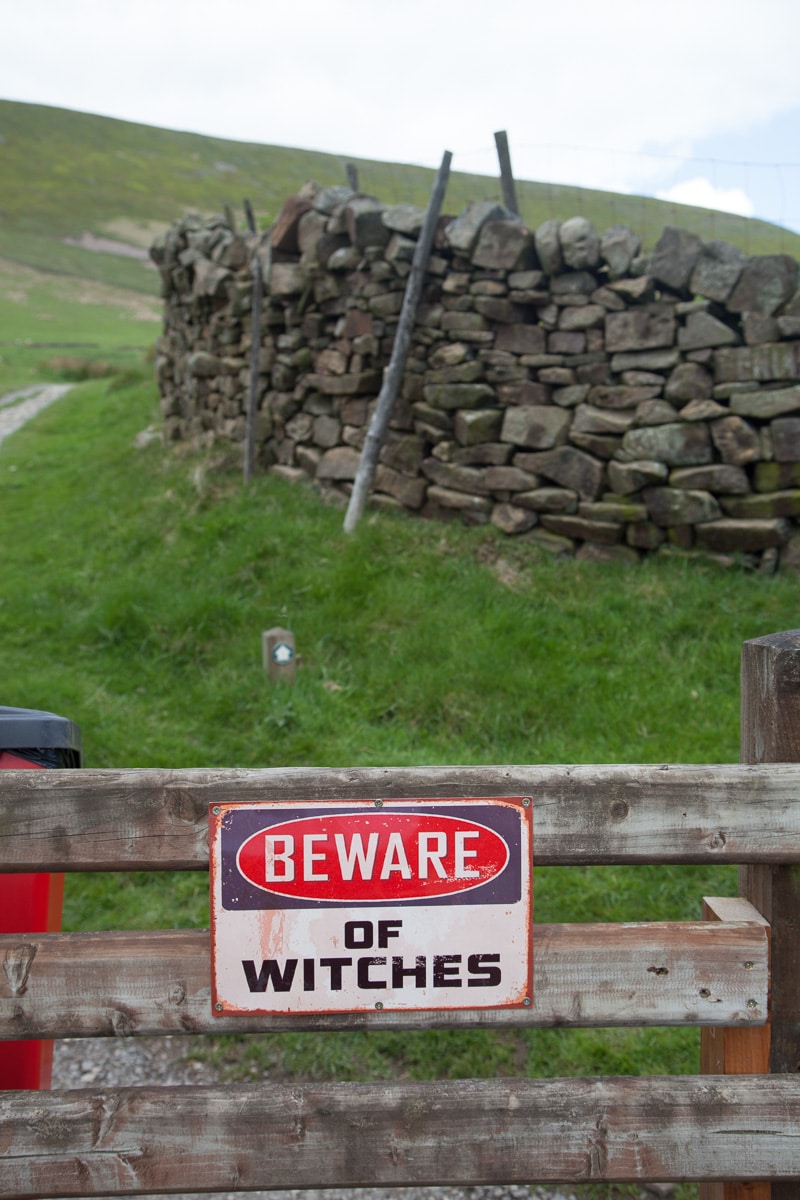 In 1612 religious persecution and superstition was widespread and people lived in fear and poverty.  It was common in the 16th century for there to be village healers who practiced magic and dealt in herbs and medicines. Witchcraft was not only feared but also fascinated the masses.  Twelve people who lived around Pendle Hill were accused of witchcraft; one died while held in custody, eleven went to trial. The evidence given against the so called “Pendle Witches” was based on memories, hearsay and superstition. Only one was found not guilty and ten were executed on the moors near Lancaster making this the biggest and most notorious witch trial in the country.

Pendle Hill also lent itself to more useful scientific endeavors as well. Experiments by Richard Towneley in 1661 using a barometer, led to the observation of a relationship between the density of air and its pressure. It seems Towneley discussed his experiments with Robert Boyle leading to the development of Boyle’s Law. 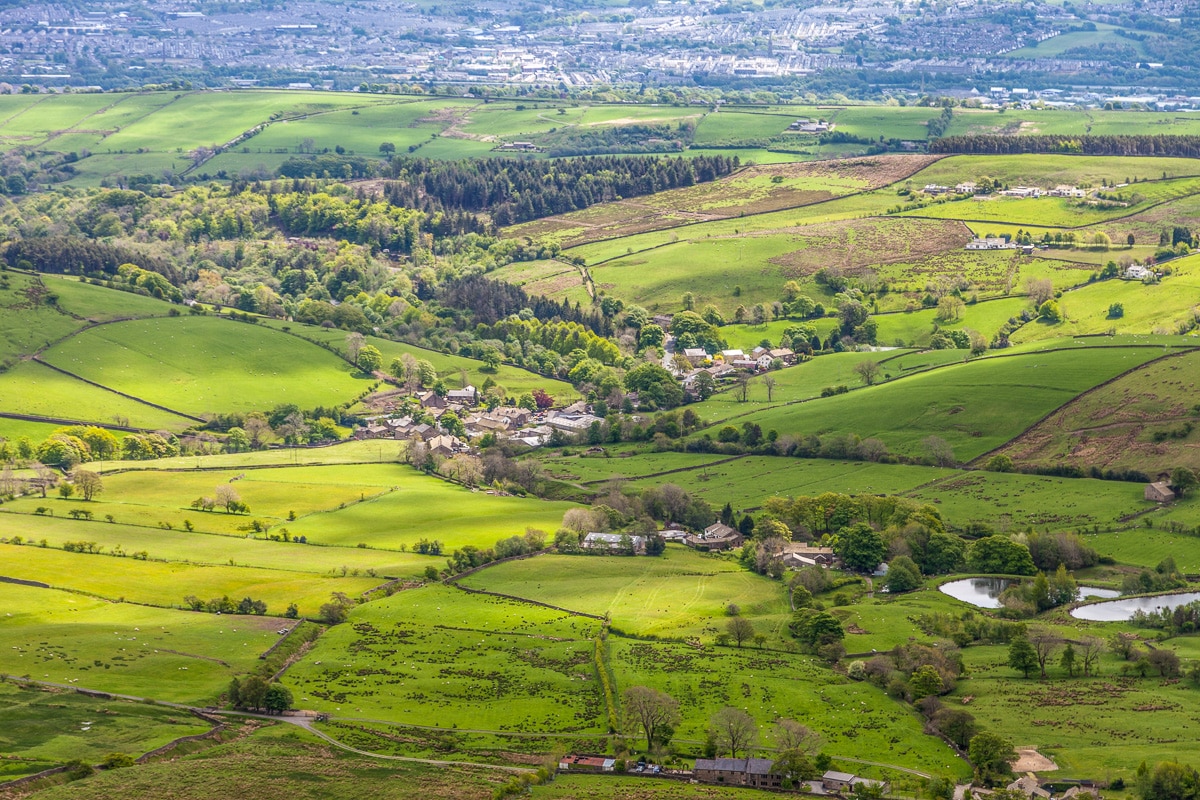 Our climb to the top started from the village of Barley, home to one of the Pendle witches. What began as a pleasant stroll quick turned uphill, and though there were stone steps, the ascent was rather steep. Of course there were less strenuous routes, but as the weather was changing, we decided to take the most direct. There is a saying in the area that “If you can see Pendle, it’s going to rain; and if you can’t see Pendle, it’s raining.”

The rain did hold off, though the cloud cover became quite thick, the wind increased, and the temperature dropped once we were on the top. So, after a little wandering and a few photographs, we began our descent. 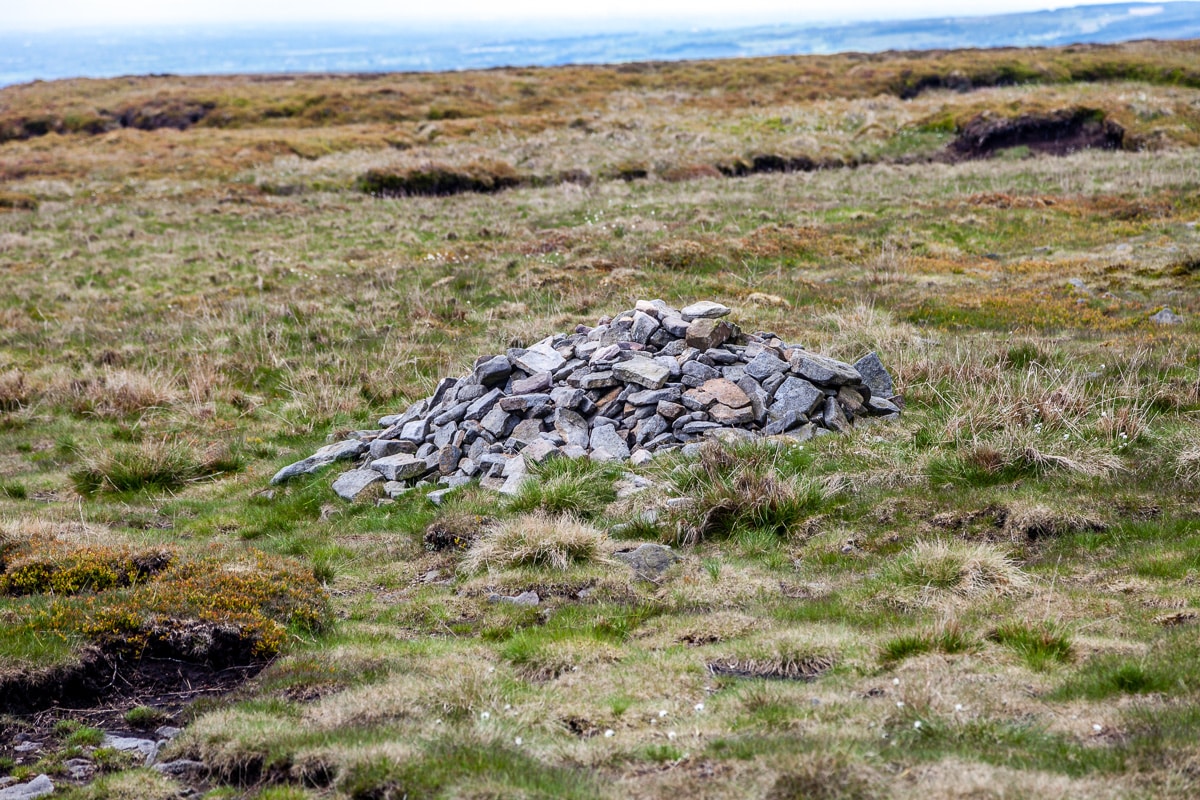 Looking around though, there were no trail markers and as we were on the steep end of the hill (actually termed a fell) we didn’t want to just head down anywhere and we didn’t want to retrace our steps. The map and compass did help us go in the right direction, but still no trail markers, until we spotted a series of widely spaced cairns or stacked rocks. As there no other clues, and the cairns roughly correlated with the footpaths on the map, we took off down the hill.

Traversing the rocky surface covered with low grasses, mosses, and peat, we worked our way around bogs and small ponds fed by little streams that trickle from the thick, spongy vegetation on the moors. 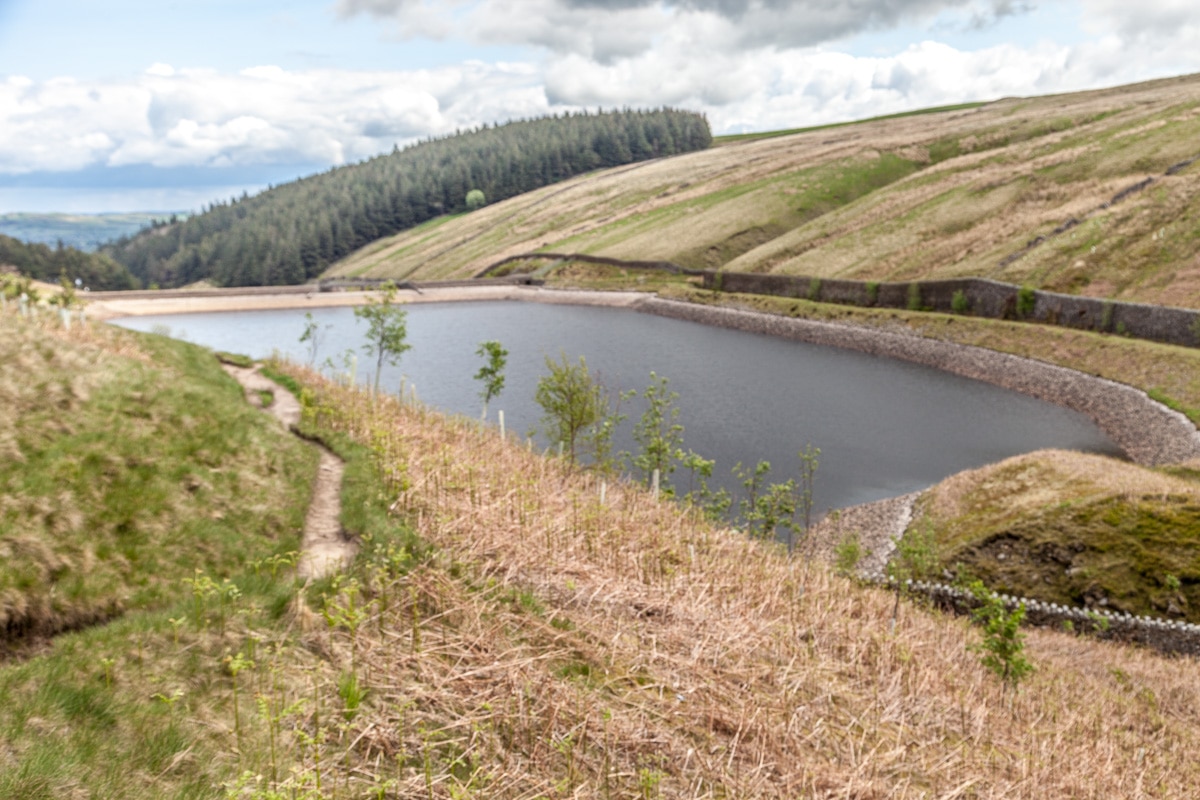 Descending within the small valleys that are part of the hill and passing a series of reservoirs on the way down we stopped for a picnic behind a stone wall out of the wind and in the sun which had decided to come out. Eventually we made our way back to Barley, and though tired, we were pleased with the day’s adventure even though we didn’t see any witches.

Returning home, we only had a few days remaining in Waddington before departing for Edinburgh. The time we spent here in Northern England was delightful in spite of some inclement weather at times. It is certainly a place we hope to return to in the future.