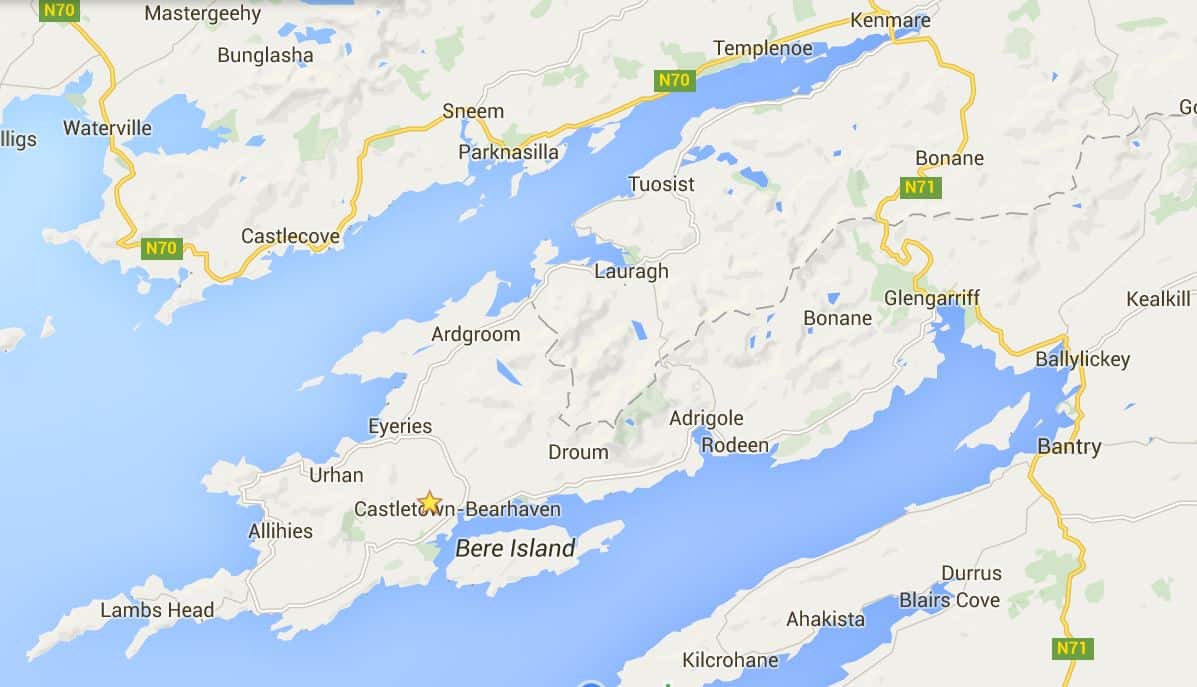 The least well known of the peninsulas of southwestern Ireland, the Beara peninsula is a hidden jewel that shines only for those who look beyond the more famous neighbors –the Ring of Kerry and Dingle. Interestingly, the peninsula was named after a Spanish princess.

In the 14th Century, Owen Mór, King of Ireland, was badly injured in a major battle. His followers who survived took him to Bere Island as a safe place for him to recover. There, the fairy Eadaoin took him in and nursed him back to health. Then Owen and his followers sailed southwards until they reached Spain, where he met and married Beara, daughter of the King of Castille.

Later Owen, Beara and a large army sailed from Spain back to Ireland and Owen took his wife to the highest hill on the island. Looking across the harbour he named the island and the whole peninsula ‘Beara’ in honor of his wife. 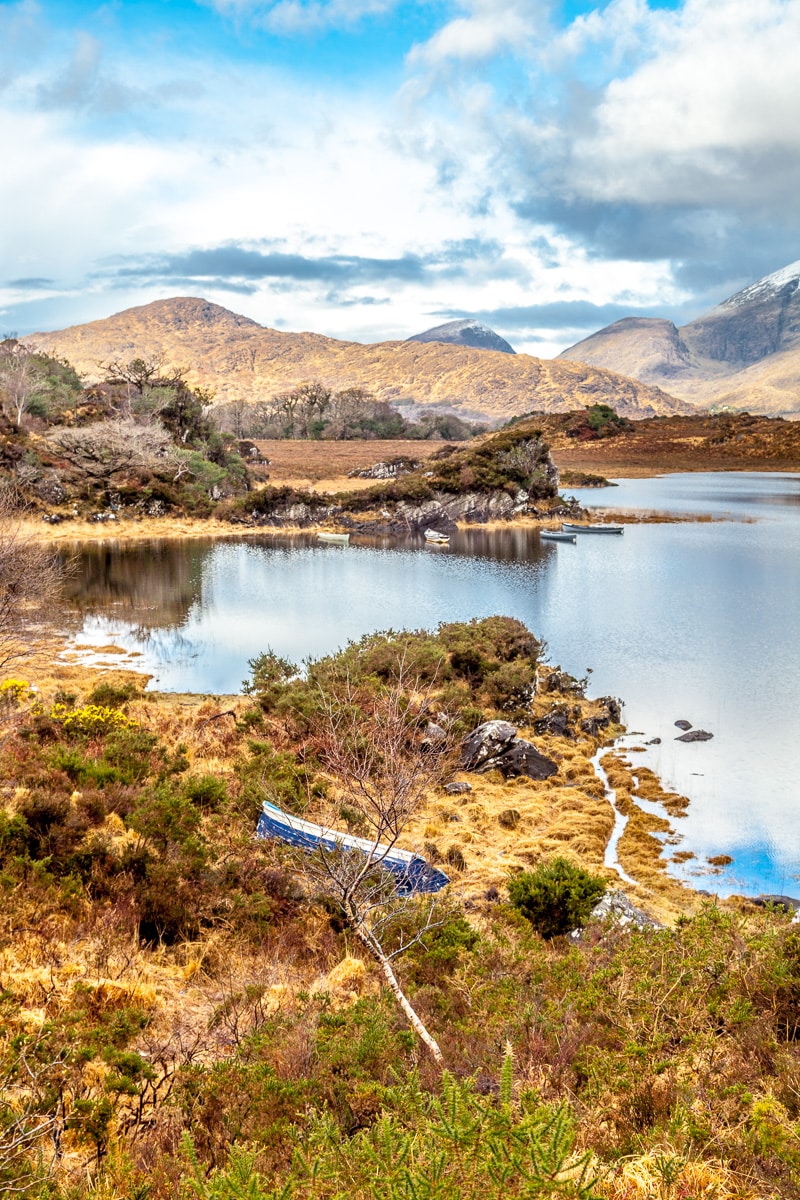 A chance meeting with a man walking his dogs in the Killarney National Park resulted in a conversation about what we should see while we were in the area. We told him that we had already driven the Dingle and the Ring of Kerry, but had not really heard of the Ring of Beara. He told us that because of its general unfamiliarity and small roads, it was a route with few tourists and no buses. His insistence that we not miss it was good enough for us.

Straddling the border of Counties Cork and Kerry in South-West Ireland, it is the next peninsula south of the famous Ring of Kerry. Quieter & more relaxed, there are also more prehistoric monuments on Beara than anywhere else in Ireland, including the tallest standing Ogham stone in Europe at Ardgroom. 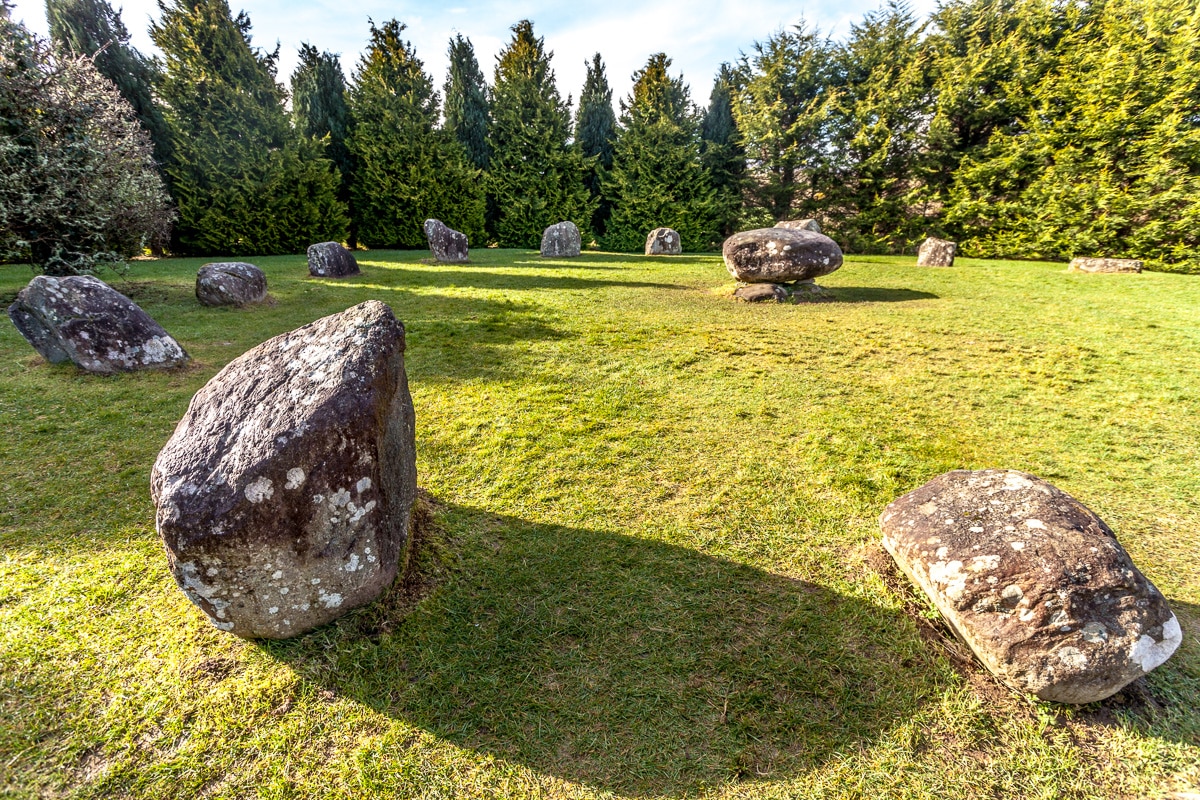 An early departure from Killarney and an easy drive over the Moll’s Gap took us through Kenmare. There we made our way to the Kenmare Stone Circle, the first in a number of ancient monuments we would visit over the next couple of days. Curiously, known locally as the Shrubberies, this stone circle lies nearly right in town yet can be a little difficult to locate.

Thought to be the largest stone circle in South-West Ireland, the Kenmare Circle is greater than 15m | 50ft in diameter and is composed of 15 heavy boulders. At its center is an interesting dolmen with a giant capstone. 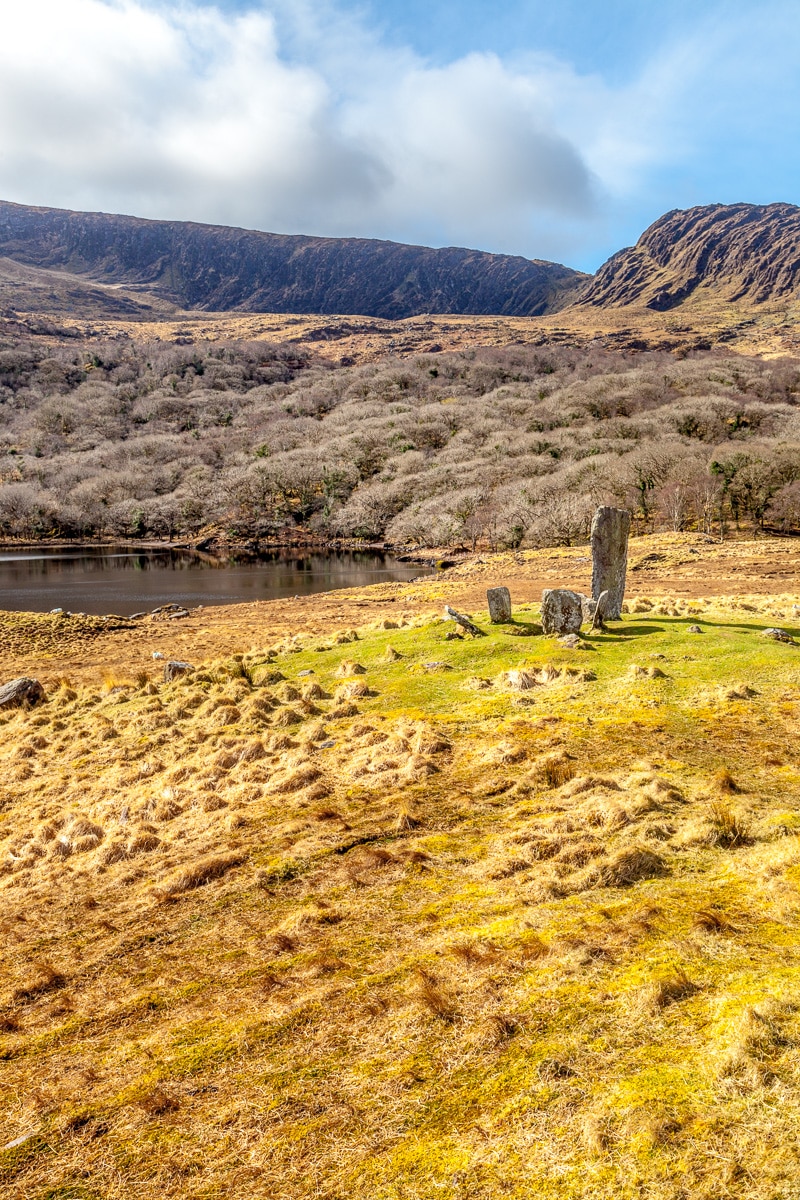 Leaving Kenmare, there were several other prehistoric sites we wanted to visit, if we could find them; though they are everywhere, most are unmarked. They are typically on private land but after some unpleasant experiences, most landowners prohibit access.

The first site we found purely by accident. We saw a sign pointing to the Uragh Stone Circle, turned down the narrow, small road for several kilometers, and came to a closed gate. There was a small sign that made us decide to continue on foot down a long path and up and over a small rise.

The scene before us was out of an adventure film. There was a mountain wall across a lake streaked with waterfalls, and beautifully situated in the foreground on a small plateau above the lake was the stone circle. Bronze Age men could not have chosen a more worthy location for their monument. The entire surrounding area was stunning. In every direction that one could see was beauty worthy of wonderment. 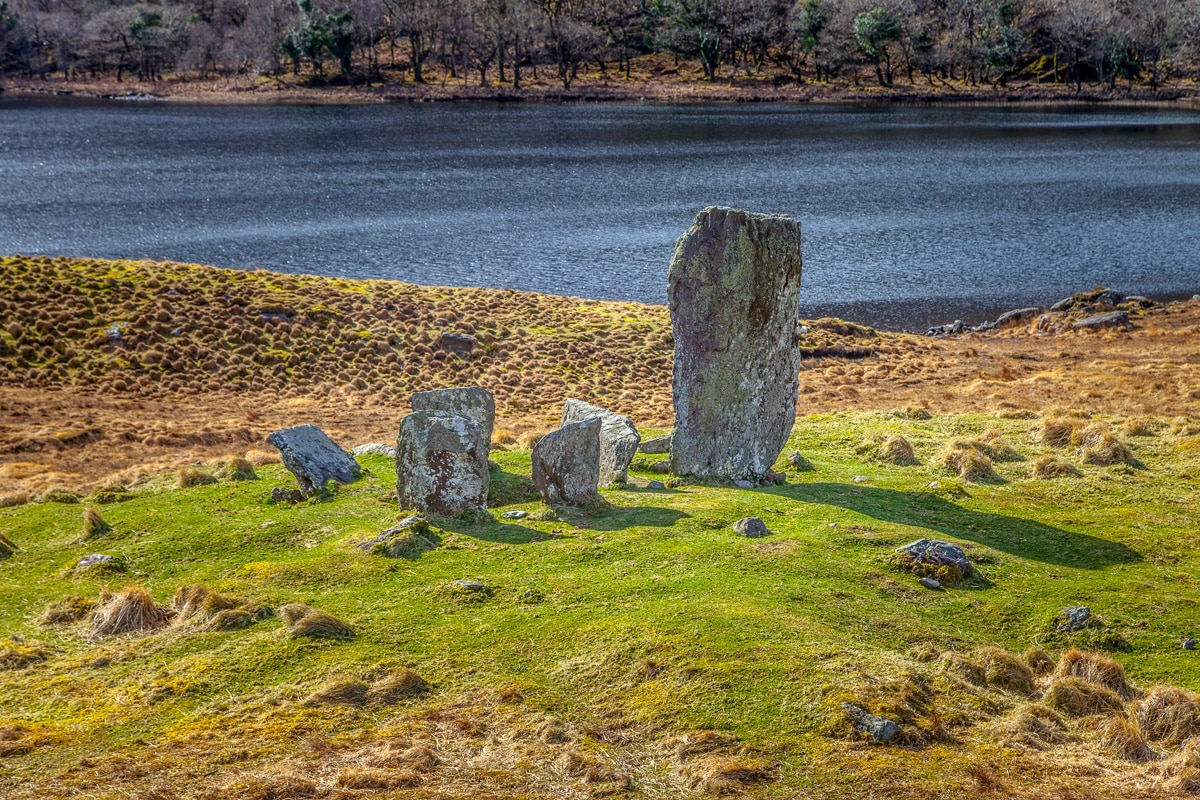 The Circle itself was composed of six stones, four low stones and an axial stone arranged in a circle nearly 2.5m | 8ft in diameter together with a huge, about 3m | 10ft tall, outlier that dominates the other stones. We wandered about the stones and soaked in the atmosphere as long as we possibly could before we had to leave this magical place; there were other marvelous things to see. 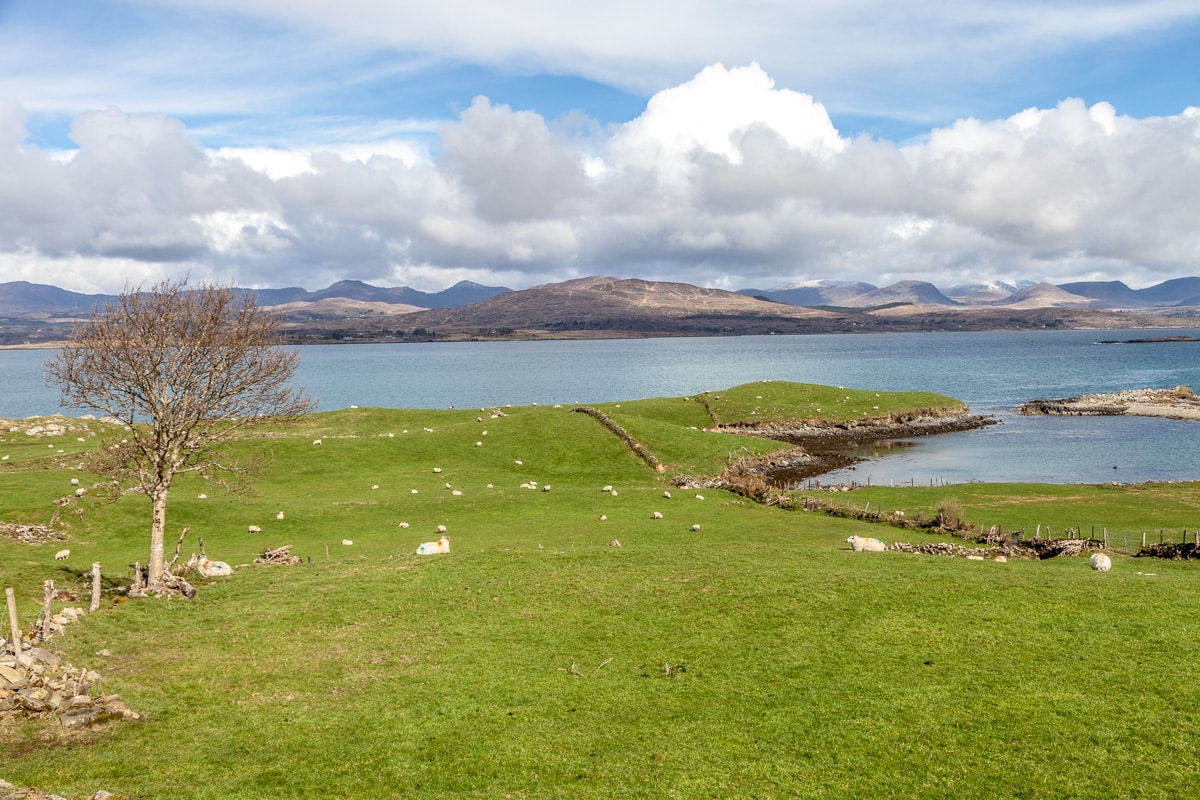 Our route then took us along the coast of the Kenmare Bay where the hills sloped gently to the blue waters. As we drove the narrow one-lane road, the sun broke through the grey sky and illuminated the green pastures, dotted with sheep.

Continuing on our track we traveled towards a small pub that we had heard of, Teddy O’Sullivan’s, that served excellent food in a beautiful location. When we arrived it appeared closed, with the windows blinds closed. 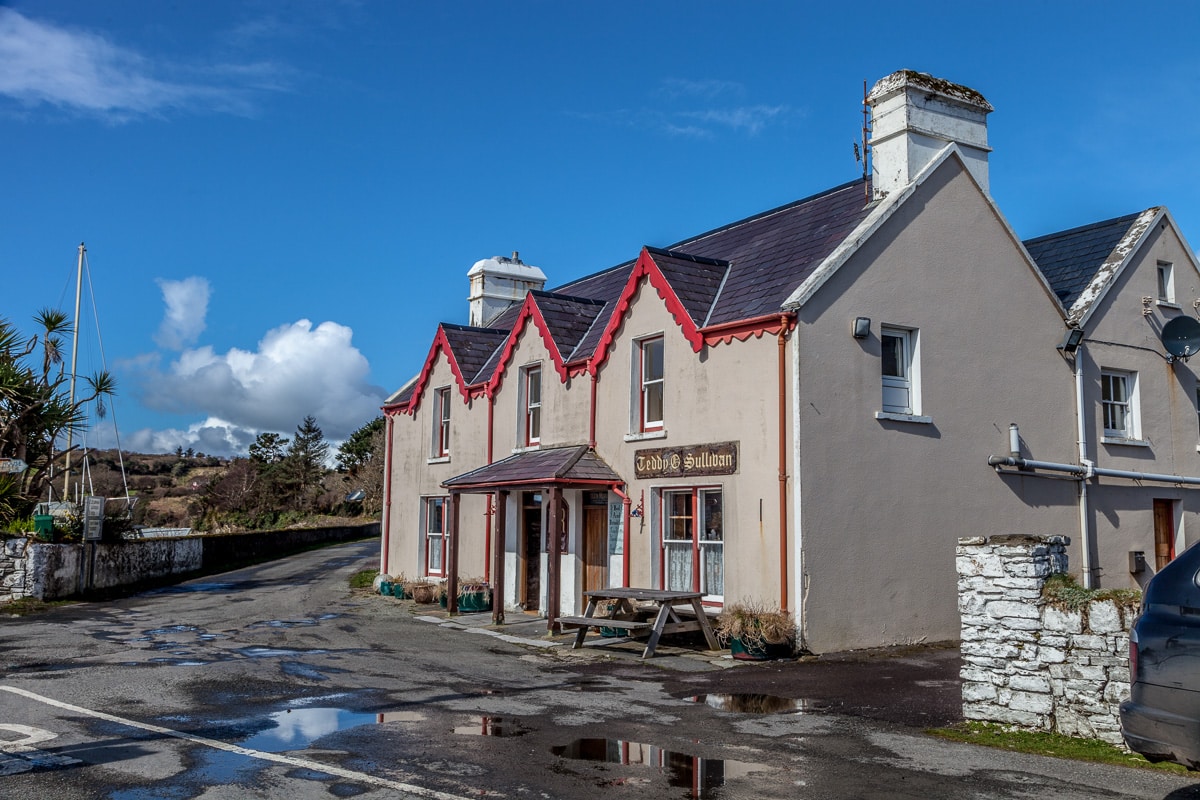 But as we approached, a woman stuck her head out the door, and asked if we were with the funeral. We replied that we were not, and she informed that a funeral was soon to be passing by, and it was the custom to close all the windows and doors until it passed.

She welcomed us in nonetheless, and we were served a meal of delicious seafood – Jeannie had a salmon open-face sandwich and I had a large serving of the freshest, sweetest mussels I have ever tasted, taken from the bay that morning. Needless to say, we did not leave hungry. 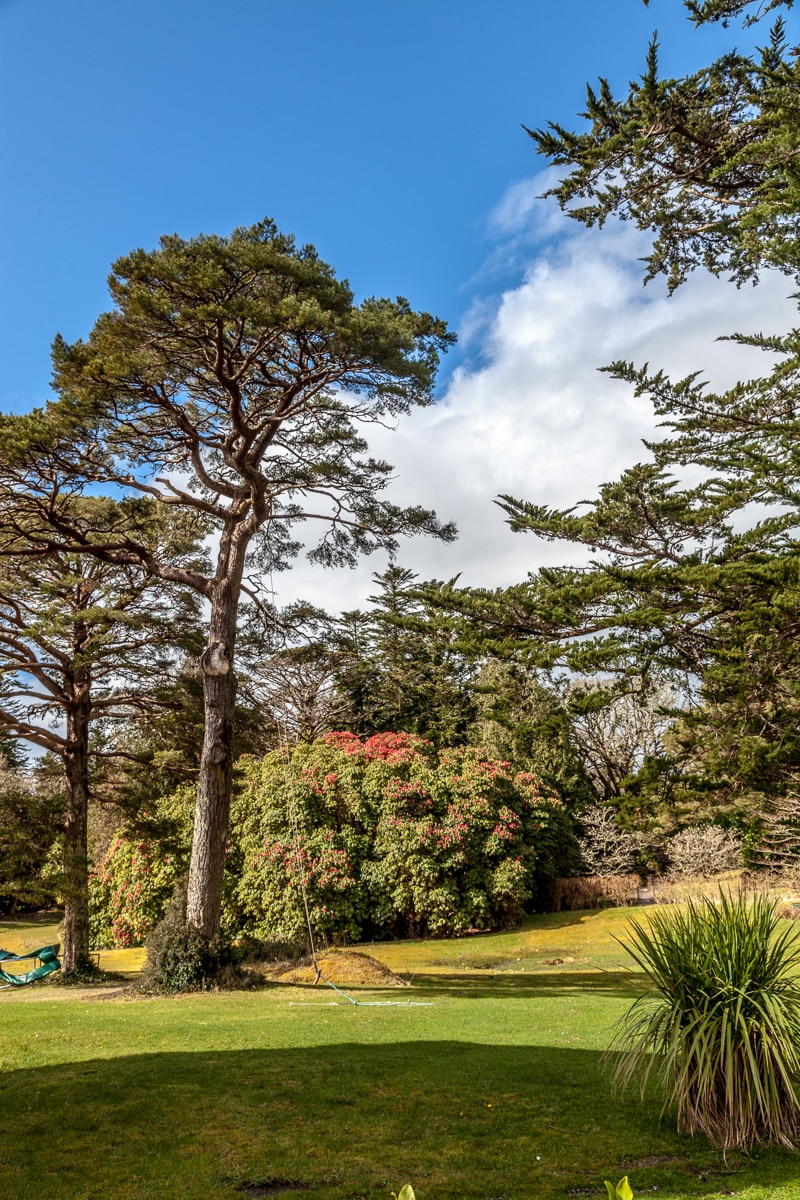 On the way to the next ancient monument, we stopped at the Derreen Garden for a delightful walk. The ancient forest trees and large tree ferns make you feel that you have stepped back in time, while the paths along the water were beautiful.

There were several accounts about the massive, standing Ogham Stone of Ballycrovane, not too far away, but details about the location were unclear. Fortunately we had written down some directions, and with the aid of a map and GPS, we made our way to near where the stone should be.

The directions indicated that the stone could be reached by walking down a private drive next to a farmhouse. As we approached, there were no signs or information, so I called out “hellooo?” and a small, elderly woman appeared. 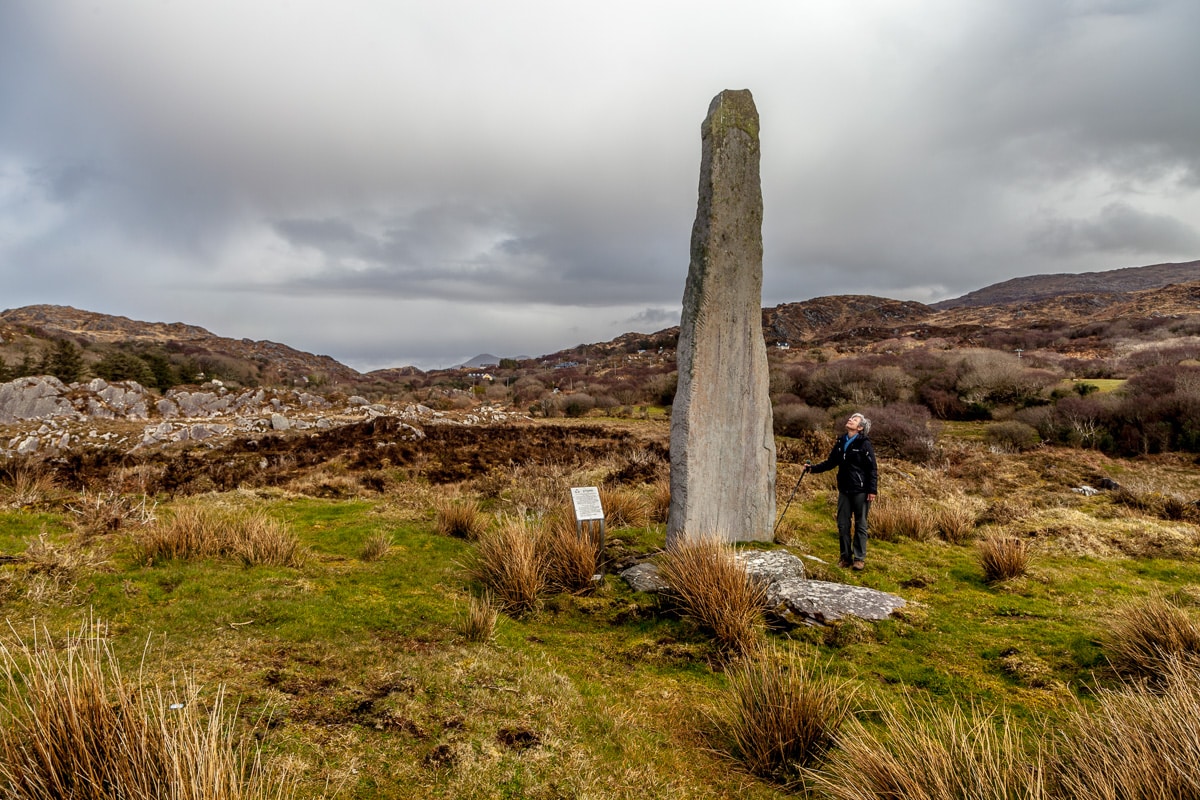 We politely inquired about the stone, and she said that they generally no longer allowed people on the property; she paused and assessing us further, she added that we could go but only at our own risk. We thanked her and followed her directions through the small farmyard past several chickens and began to climb a small hill.

The scene at the top was nearly as spectacular as at Uragh Stone Circle. Standing in front of us was a monument stone 5.3m | 17ft tall, and considered to be one of the tallest in Europe. Overlooking Kenmare Bay, it resembles a piece of modern sculpture, and occupies a site that must have been of importance to the Bronze Age men that erected it. The stone also has well preserved ogham (an early written Irish text). 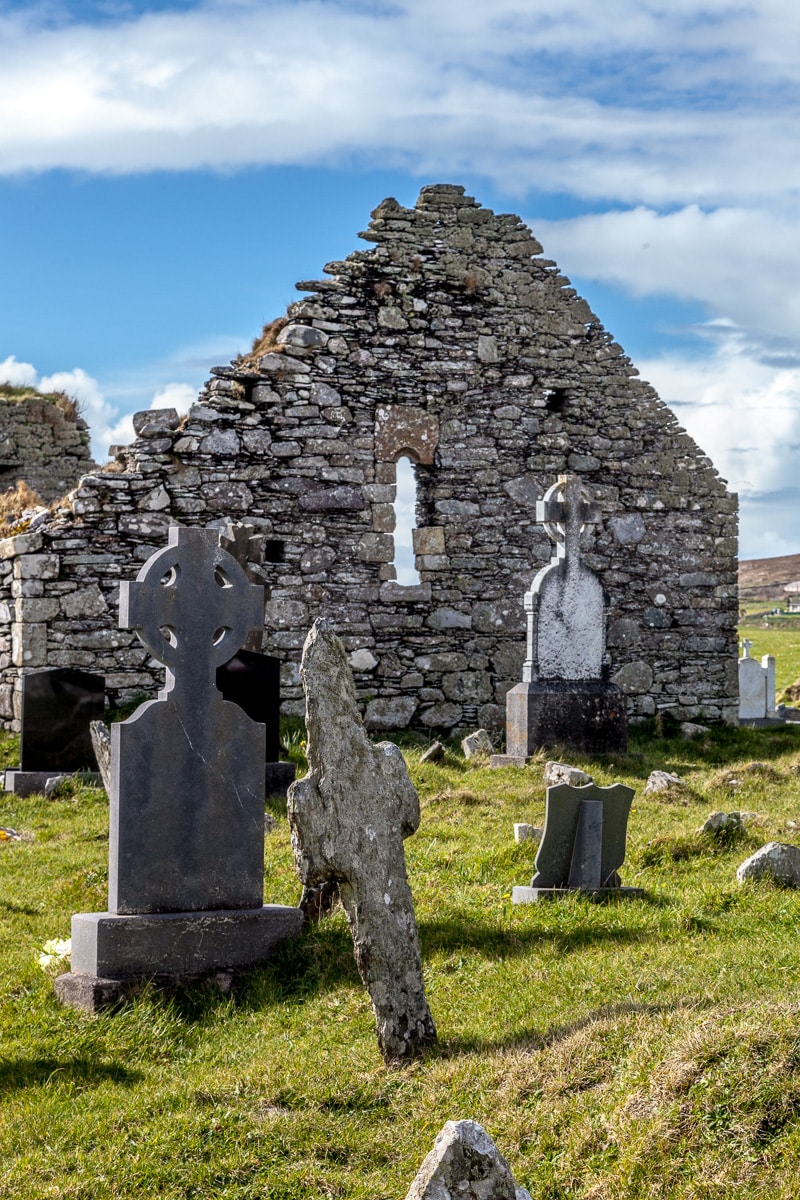 Two other nearby sites that we visited weren’t as old but still significant to the local culture. The first was the ancient monastic site and ruined medieval church of Kilcatherine, possibly dating to the 7th Century. The church is named after the mysterious St. Caithighearn, known as “The Cat Goddess”. Situated high above the bay, the many ancient and modern graves have a peaceful and beautiful vista.

The other place of interest near the church is the “Hag of Beara”. Legend has it that the large rock which rises above the Ballycrovane Harbor represents the stony remains of the face of the Cailleach Beara awaiting her husband Manannan, God of the Sea, to return to her. Many legends surround the “Hag”, whose roots lie in pre-Christian Ireland. The Hag of Beara has come to represent Mna na hEireann – the women of Ireland – due to her power, fertility, and strength. 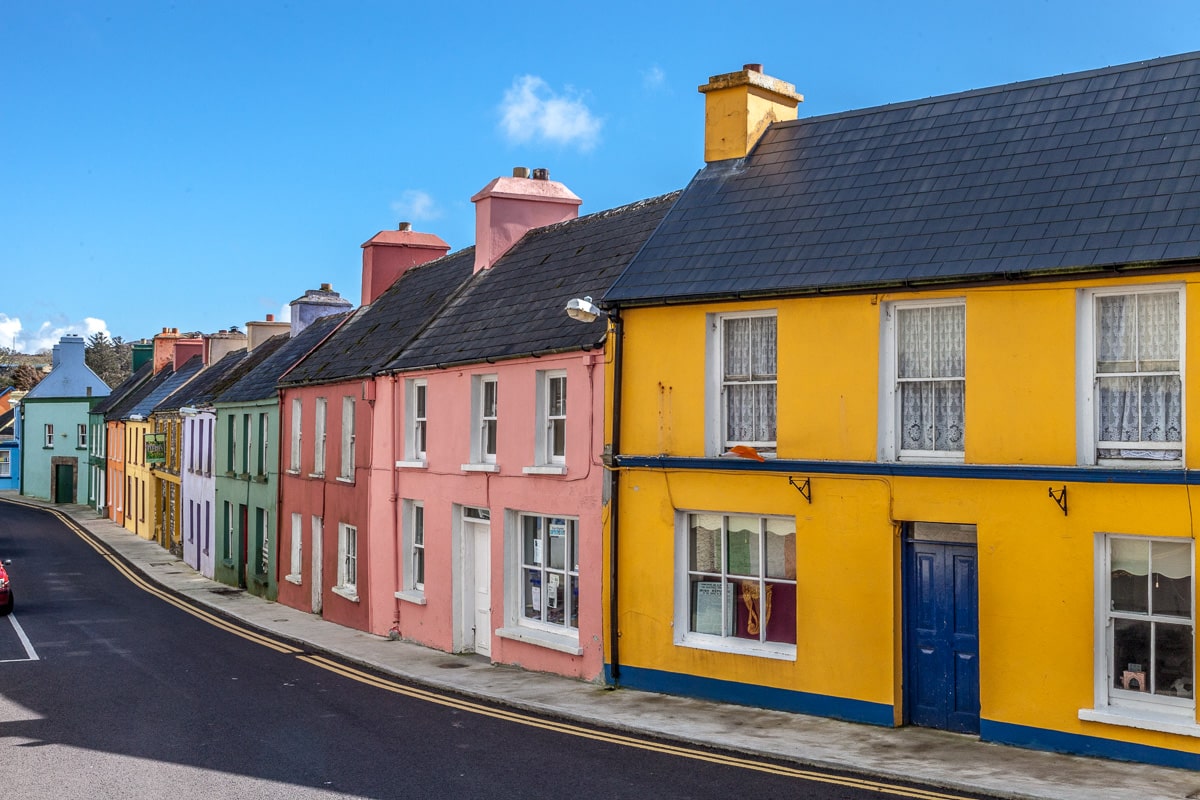 The day’s driving was almost over as we passed through the little town of Eyeries.  One of the most south-westerly villages in Ireland, it is situated on a bluff that overlooks Coulagh Bay and beyond that, the Atlantic Ocean. One of Irelands “Tidy Towns,” we stopped briefly for a short walk and a snack, and admired all of the colorful facades of the homes and shops. 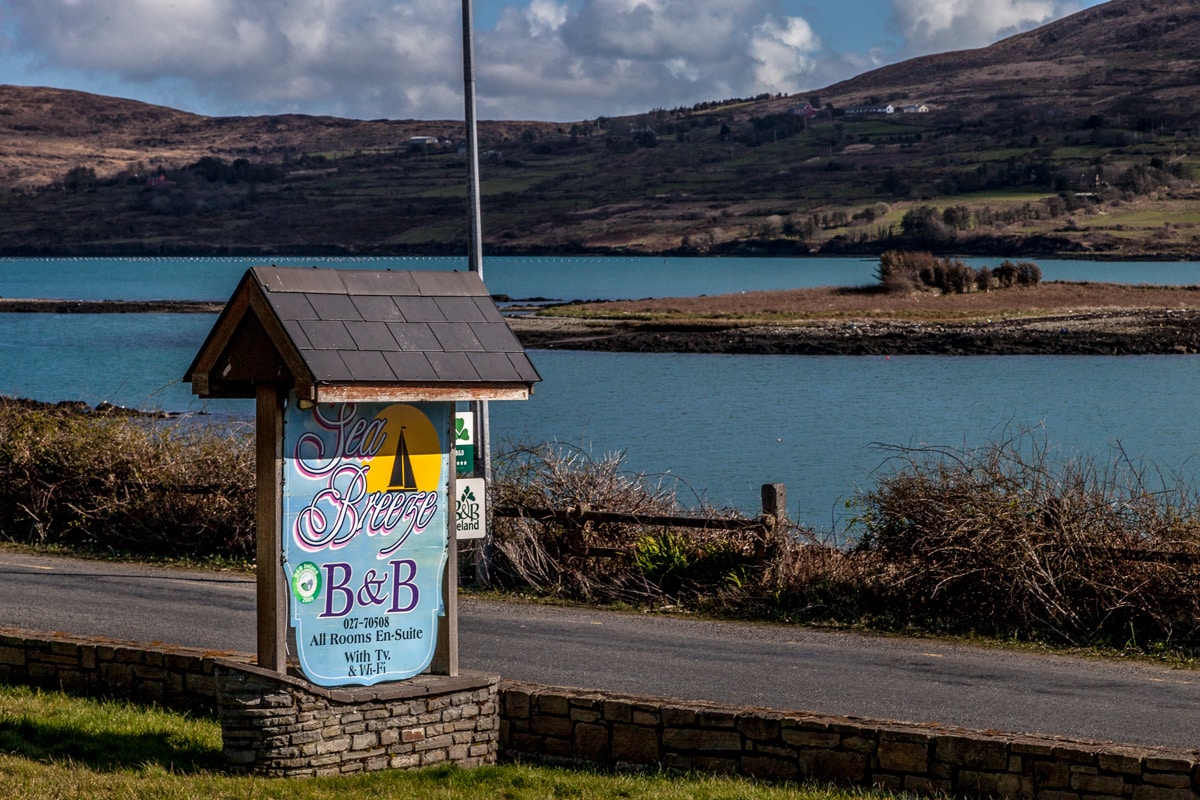 Our next stop was Castletownbere and as we turned onto the main road we were glad to be close to our accommodations at the Sea Breeze B&B. We checked in and made our way to a filling, delicious dinner at Murphy’s Restaurant.

It had been a great day, and after walking into town and back we were happy to turn in, and to sleep and dream of ancient times and places. Besides, there was to be more magic tomorrow.