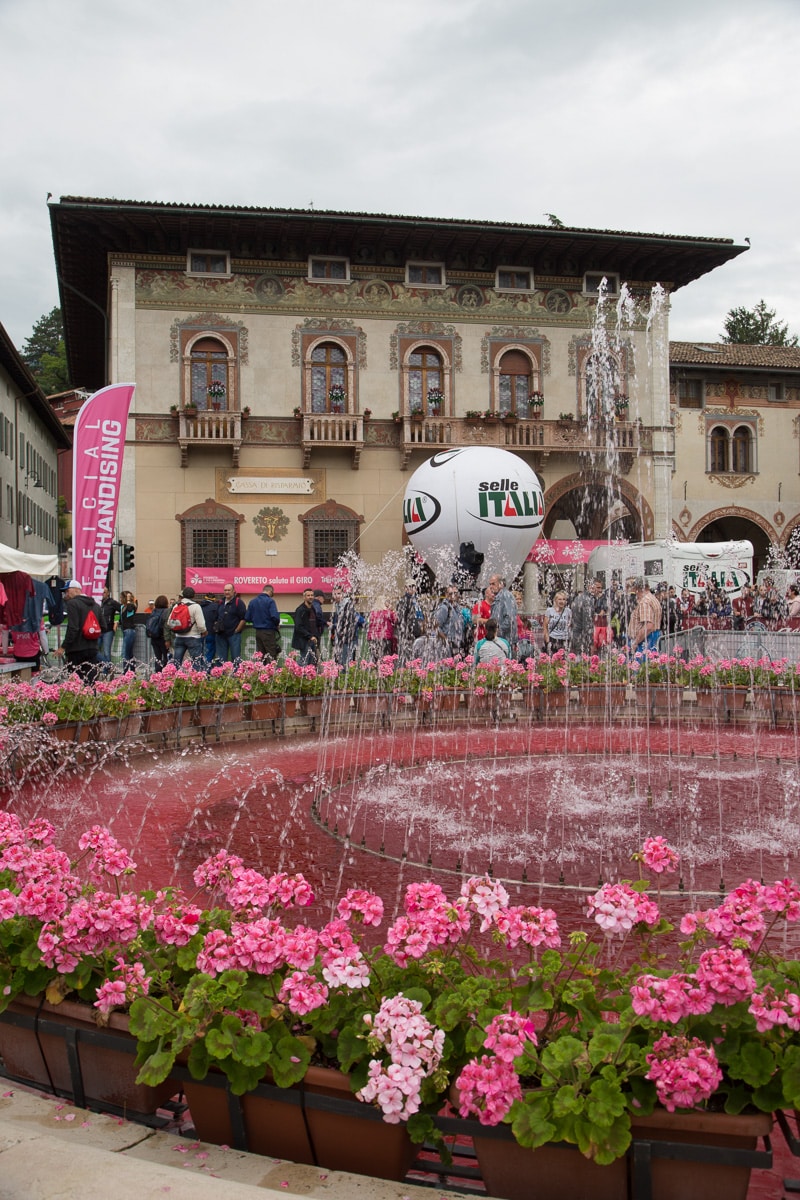 Of bicycling’s three Grand Tours, the Giro d’Italia is the first of the season.  The others are the Tour de France, and the Vuelta a España.

As many times as we have been in France, we haven’t been at the right time or the right place to see the Tour de France. But, a couple of years ago we were fortunate enough to be in Madrid to see the final stage of the 2015 Vuelta a España (22 August to 13 September 2015). 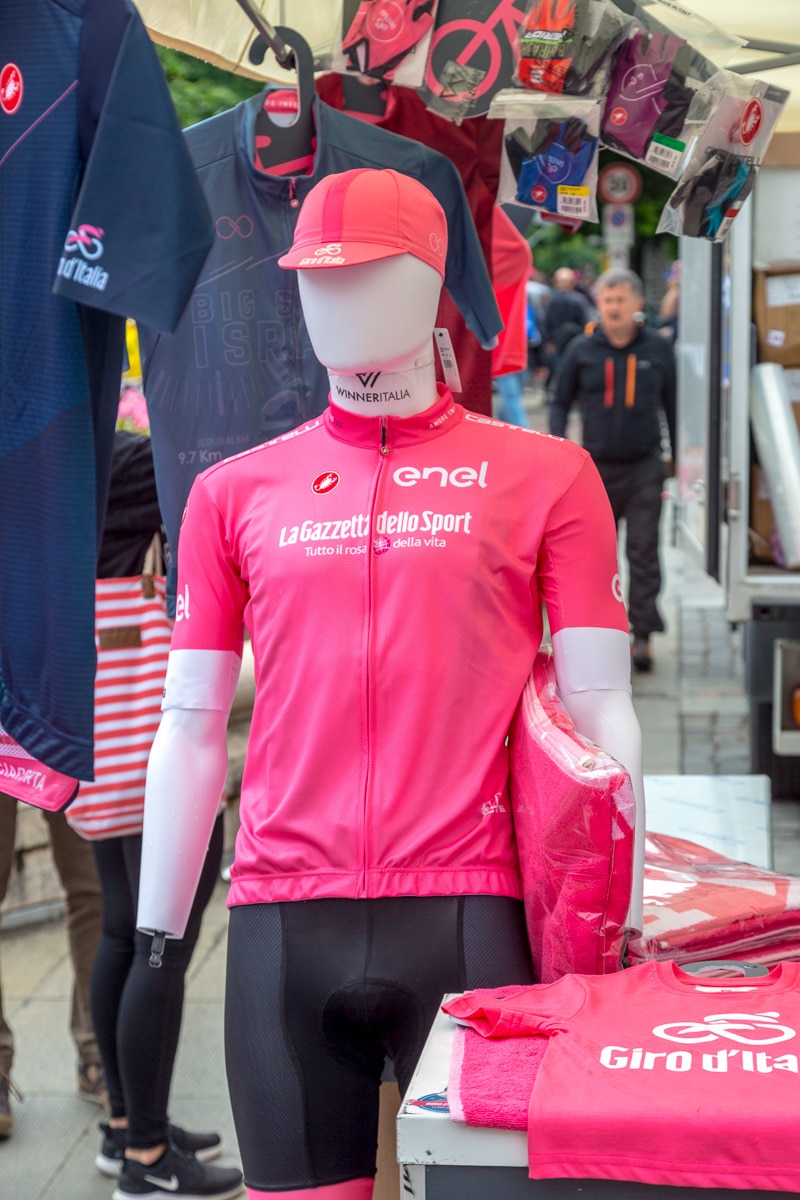 The 16th stage of the Giro d’Italia was an individual time trial of 34.2 km (21.25 mi) from Trento to Rovereto. We would be able to take the train with little difficulty, get settled before the first racers arrived, then be able to watch a good number of the field finish before we would need to return to Verona.

In this time-trial, the individual racers take off from the starting point in Trento at 1 minute intervals. Thus, they would arrive in Rovereto individually or in groups of 2-3 over a few hours in the afternoon. While the time-trial is not quite as exciting as a road race stage, it avoids the disadvantage of watching all 200 riders or so streak past in 30 seconds – and then they are gone. 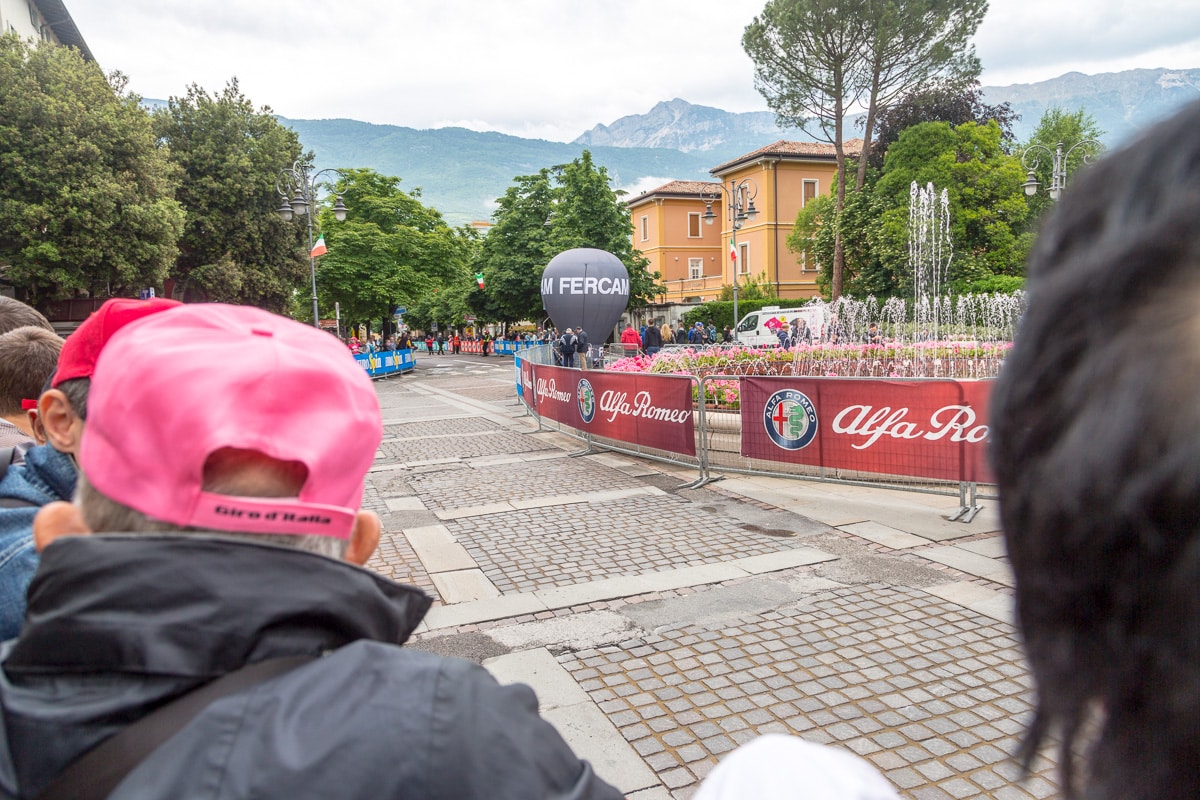 The weather forecast for the day though, was not looking hopeful. In fact Jeannie and I decided to stay home (and forfeit our train fare) rather than stand in the rain for a couple of hours. But Mike and Kathy weren’t going to let a little rain dampen their adventure, so they left early so they could explore the venue before the first riders arrived.

As the morning wore on, the sky in Verona began to brighten, and Jeannie and I made the decision to go ahead and catch the next train to Rovereto. We texted Mike and Kathy informing them of our plans, and soon we were all together sharing a delicious lunch with time to spare before the race began. 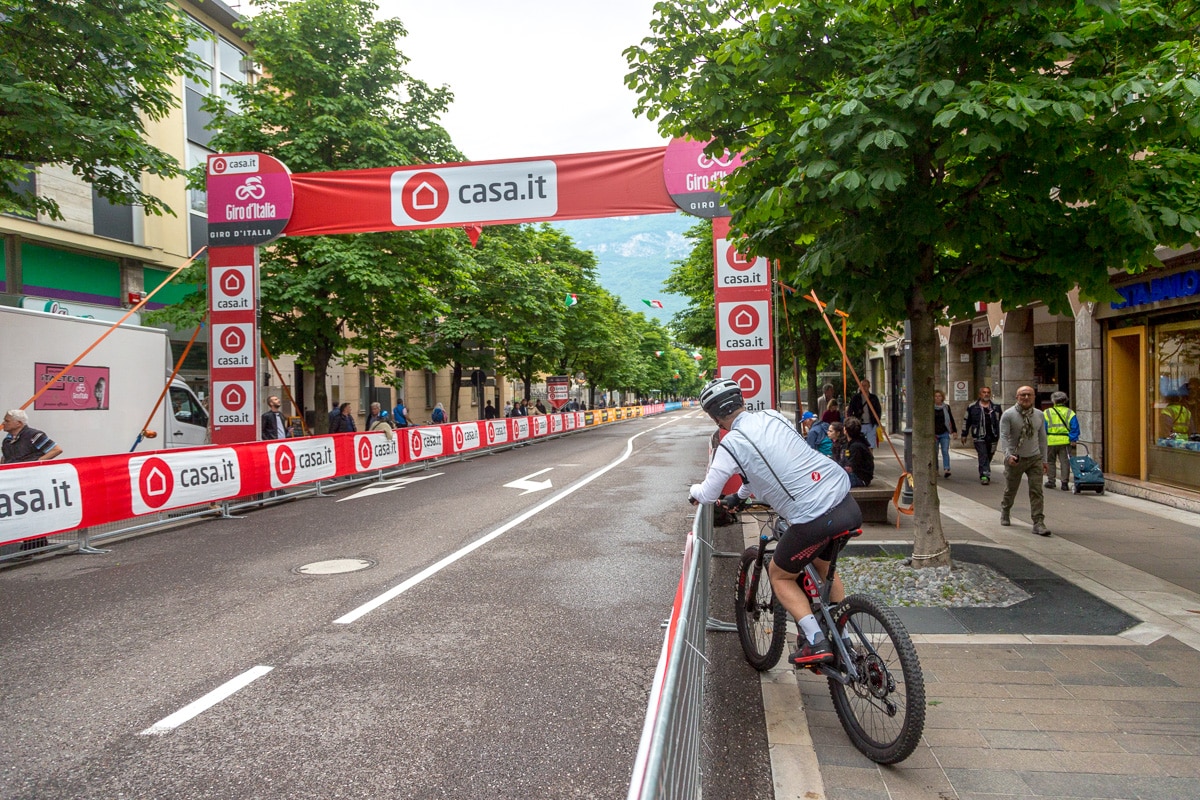 And there was no rain.

As people began to line behind the barriers along the route that the cyclists would follow into town, the anticipation mounted. We had positioned ourselves some distance from the finish line in order to have good views of the riders approach, and to be able to get to a few other vantage points at corners that would require a bit more technical riding. 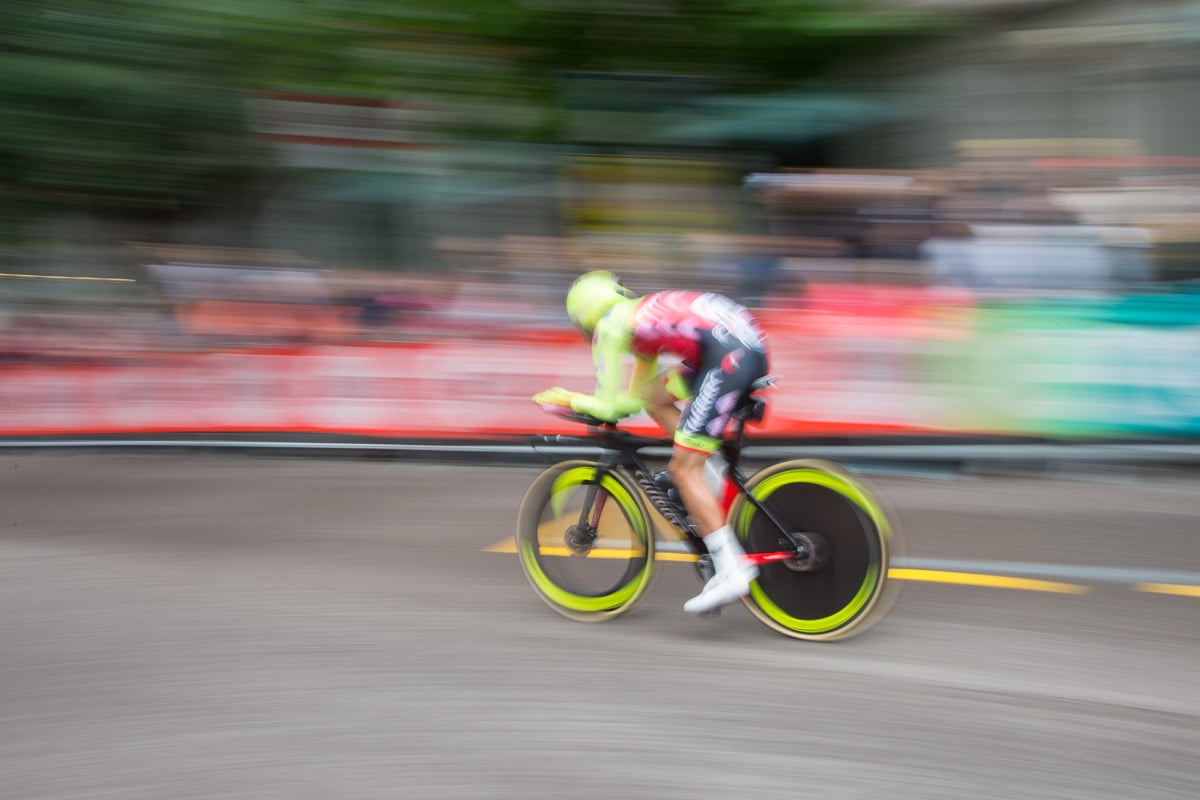 The cyclists departed Trento with the lowest ranked riders leaving first, meaning that the highest placed riders would not be on the road until late in the afternoon. We wouldn’t be able to stay for the arrival of the top names such as the leader and eventual winner, Chris Froome, but it was exciting to watch as, in the distance the headlights of the team cars and escort motorcycles came into view, and the lone cyclist approached. Over the entire 34.2 km (21.25 mi) ride, they were averaging speeds as high as 52 kph (32 mph). Even at the end of the course the riders moved fast and appeared strong, each giving their best effort until the end. 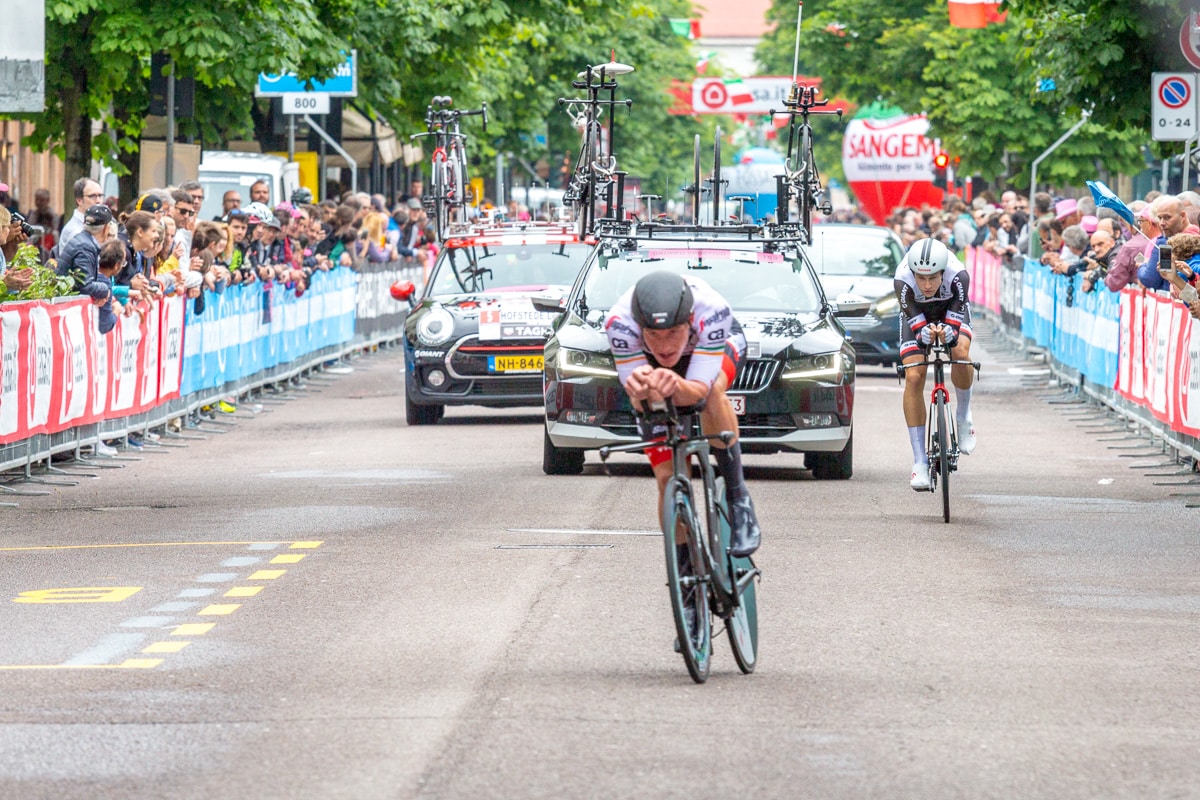 During the time we were in Rovereto, we transitioned to several locations to see many riders pass by.

We were all tired as we took the train back to Verona, but even though we weren’t able to stay to see the top riders finish, the day had been exciting, and even more important, my brother got to see a world-class cycling event.