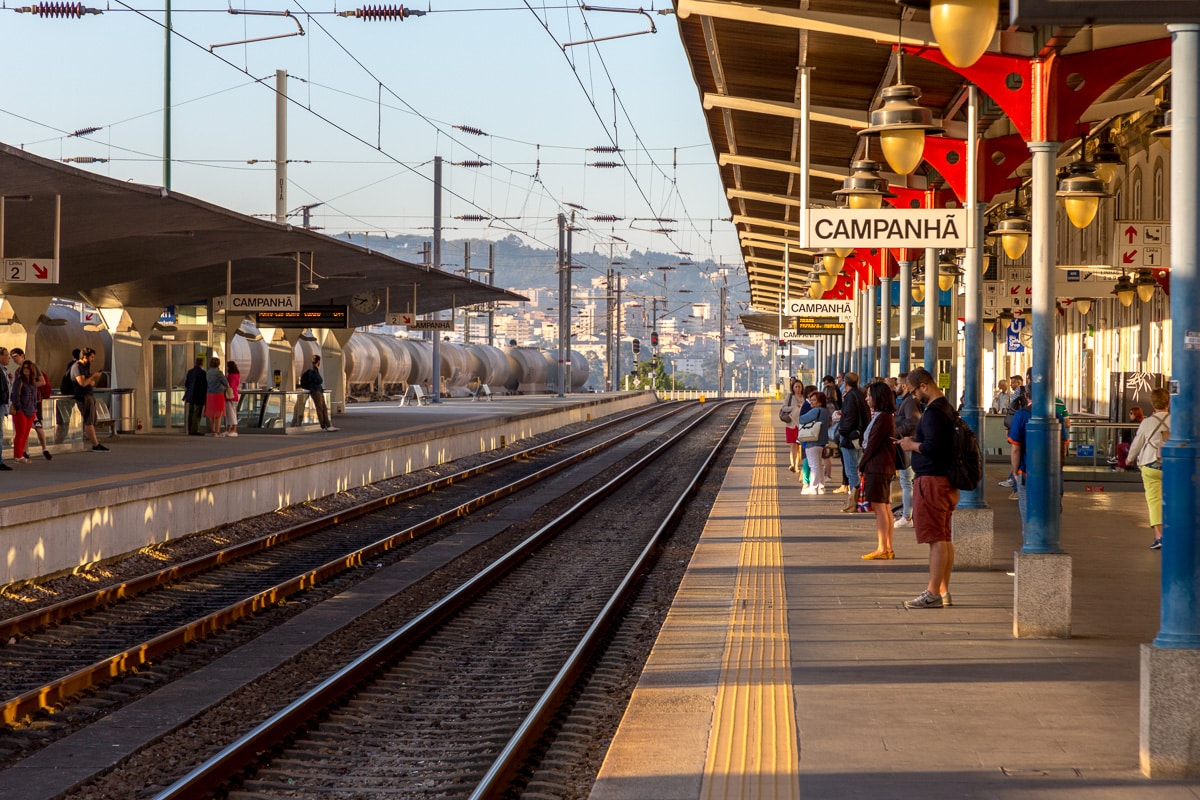 There are many day-trips away from Porto we want to take, but at this time of the year, late August, it’s best to stay along the coast since the further you venture inland the hotter it gets. While it may be 24 to 27 C (75 to 80 F) in Porto or other places next to the Atlantic, it can easily be up to 11 C (20 F) hotter just short distances away from the ocean.

The weather this day was going to be no exception, so we made plans to visit the town of Viana do Castelo located at the mouth of the Lima River in northern Portugal. This charming town is proud of its century-old traditions and has a picturesque medieval historical center to wander around. There was only one “problem”, but more on that later. 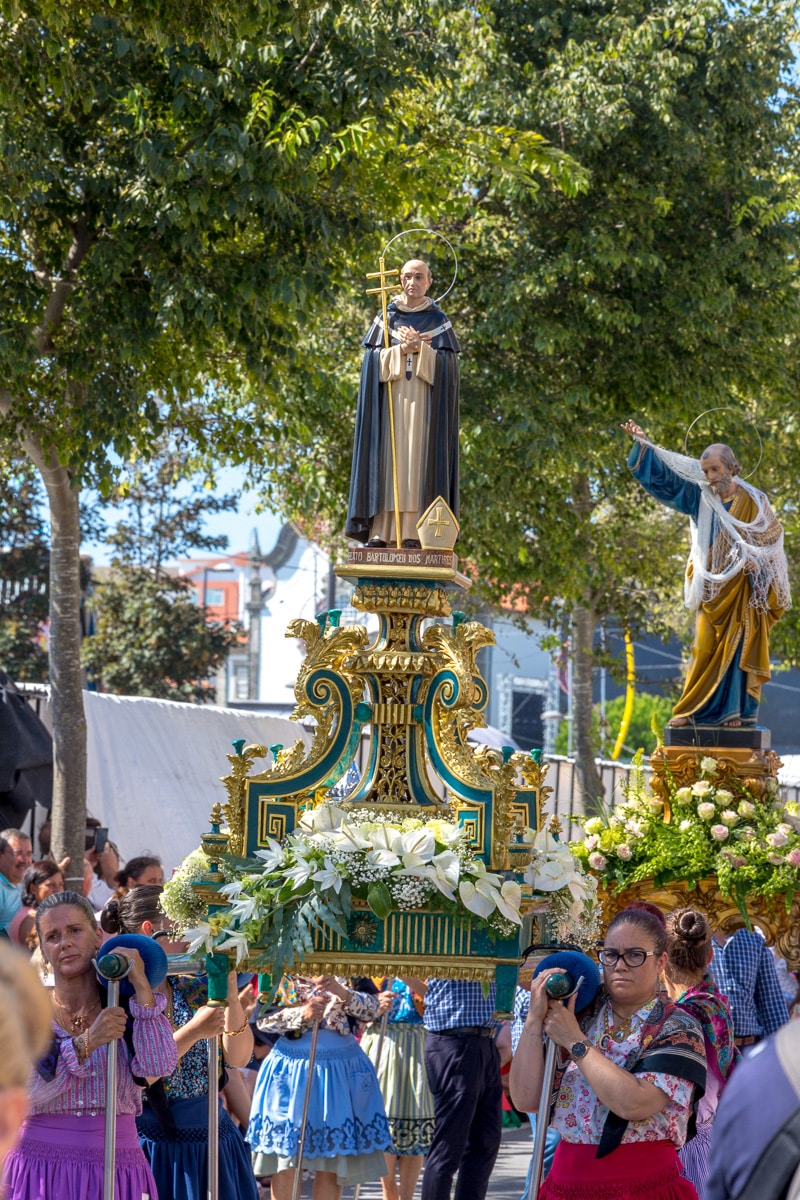 As it turned out, there was also another good reason for going to Viana do Castelo on this day. After missing out on the Assumption Day celebrations in Porto, we made special notice of the Romaria de Nossa Senhora d’Agonia, the annual pilgrimage in Honor of Our Lady of Agony – the patron saint of local fishermen. Dating back to ancient times it is held annually in the city on 20 August, and is one of Portugal’s largest religious festivals.

Awakening to an early alarm, we showered, had a cup of coffee and light breakfast, grabbed our bags and took off for Campanhã station. The train arrived on time and we easily found our seats.

After a while, as the conductor came through to check tickets, we heard loud voices behind us, and everyone turned to see. It seems that a rather unkempt man did not have a ticket and apparently was not going to pay for one. At the next station, the conductor opened the outside door and strongly requested the man to leave. Once the conductor was on his phone, perhaps calling police, the man did finally exit the train. No one really appeared worried, the situation was quickly resolved, and we were on our way again. While we didn’t understand the ensuing remarks between the other passengers, the loud laughing and big smiles didn’t require translation. 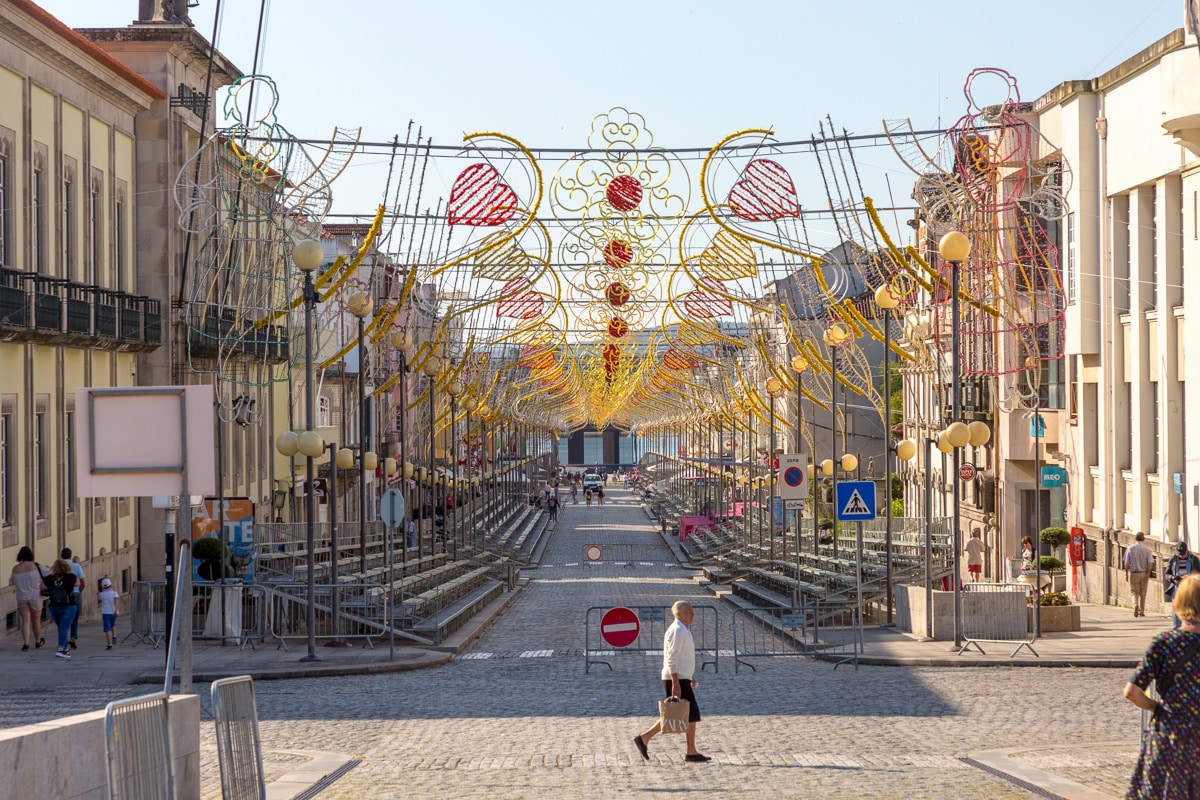 Arriving in Viana do Castelo, we walked down the main street toward the Lima River. Along the way, we were impressed at the preparations being made for the day’s festivities. Stopping at a crowded cafe for coffee and a croissant, we re-energized ourselves and then walked to the nearby river. Next, after locating the tourist information office, we gathered material about the festival, and some tips from the two young ladies working there about where to position ourselves for the morning’s events, and then the afternoon procession.

Wandering as best we could through the sea of people, we enjoyed the decorations the locals had put out. Colorful scarves were hung from balconies throughout the town. Flower beds and boxes were filled with blossoms, and in the bandstand of one park, a school band enthusiastically played as onlookers, parents and grandparents clapped along to familiar Portuguese tunes. 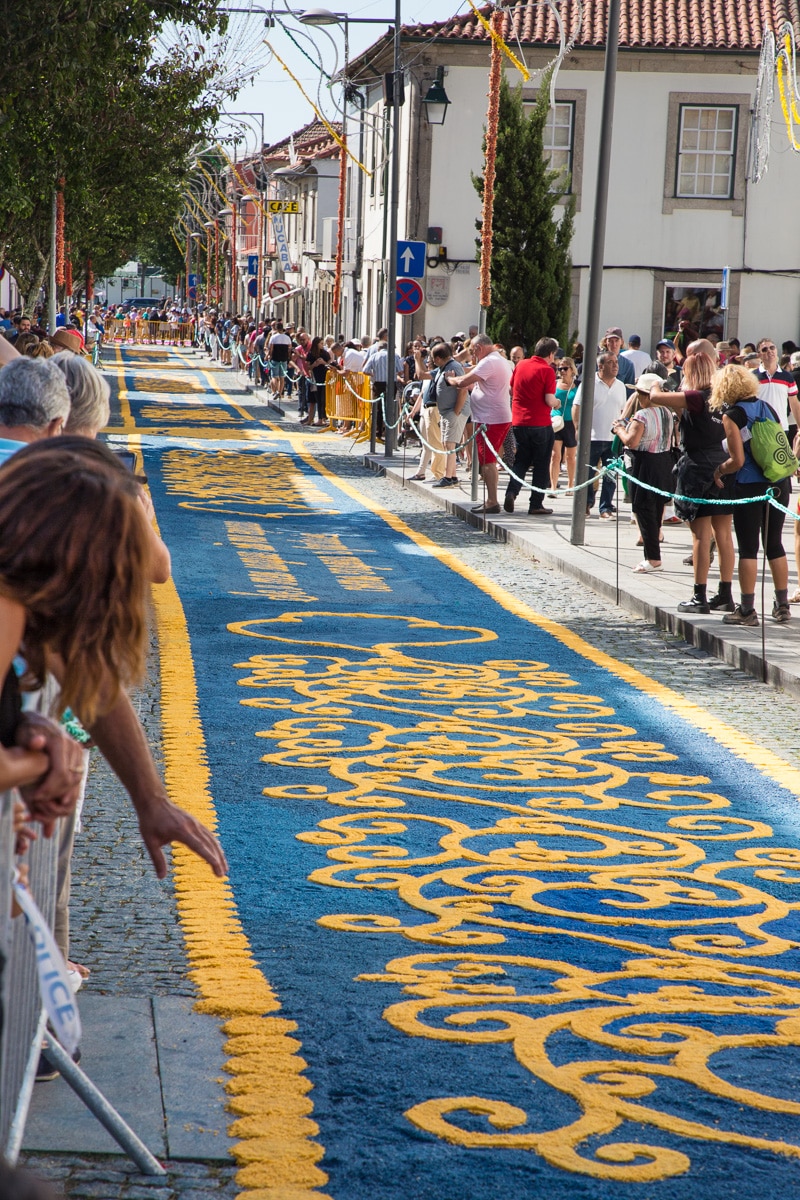 Making our way back to the center of the medieval town area, we had time to admire the “tapetes floridos” or “floral rugs” filling the streets that make up the path of the procession with color and beauty. Residents had worked through the night making drawings and molds that were then filled with colored salt, sawdust, painted stones, seaweed, flowers and branches from shrubs, making the streets true works of art. The tradition of decorating the streets for the religious processions dates back at least two centuries.

Making our way to the Praça da República, the socio-cultural and political center of the town for over five hundred years, we were just ahead of the crowds assembling to watch the “Gigantones e Cabeçudos” accompanied by “Grupos de Bombos”. 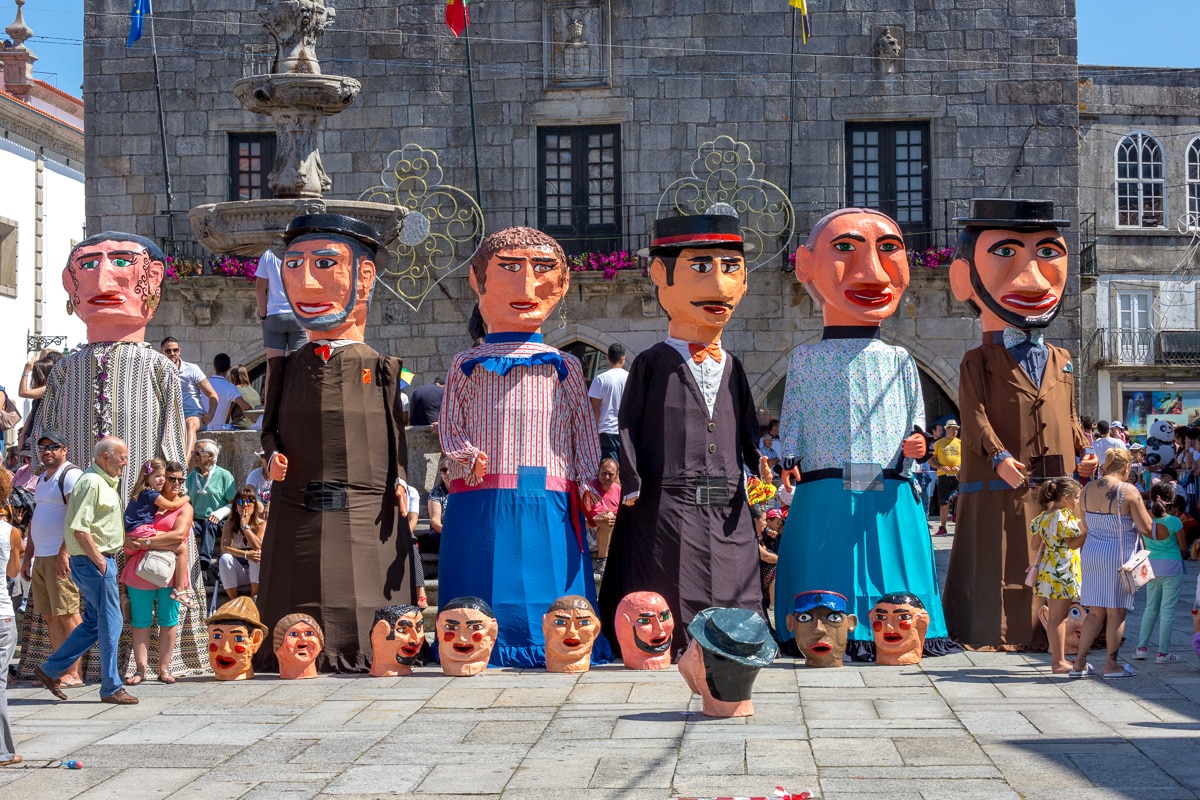 The Portuguese tradition of Gigantones (or giants) dates back to 1265. They are usually hollow figures several meters tall, with bodies covered in cloth and other clothing. Their frame is usually made of wood or aluminum, and a mixture of papier-mâché and plaster of Paris is used to make the head and hands, which swing freely. The individual inside carries the giant supported on his shoulders via a harness.

The Cabeçudos or big heads, are human scale, smaller figures that feature an oversized, papier-mâché head. They chase each other, and sometimes children, around.

The Gigantones e Cabeçudos, as they spin and dance about, are accompanied by “Grupos de Bombos”, or very LOUD drum groups. Multiple grupos de bombas, each composed of 20 or more drummers carrying 10 or more large bass drums and just as many tom-toms, arranged themselves around the periphery, where they slowly marched counterclockwise around the Praça.  There seems to be a competition as to who is the most energetically loud. The name Grupos de Bombos seemed rather appropriate if translated (somewhat incorrectly) as ‘Groups of Bombs’, because of their intensity, energy, and volume.

The thundering of the drums and the twirling of the Giants went on for well over half-an-hour, and toward the end we made our way to find a place for lunch. Soon the crowds began spilling into the streets making it difficult to make progress. Looking for a place for lunch, we stopped at a small restaurant, put our names on the list and began our wait. It took a while, but we finally got seated outside and placed our orders, grilled salmon for Jeannie and fried fish for Chris. Dessert was a large slice of a very sweet melon followed by espresso. Then it was time to find a location from which to watch the procession of the saints. 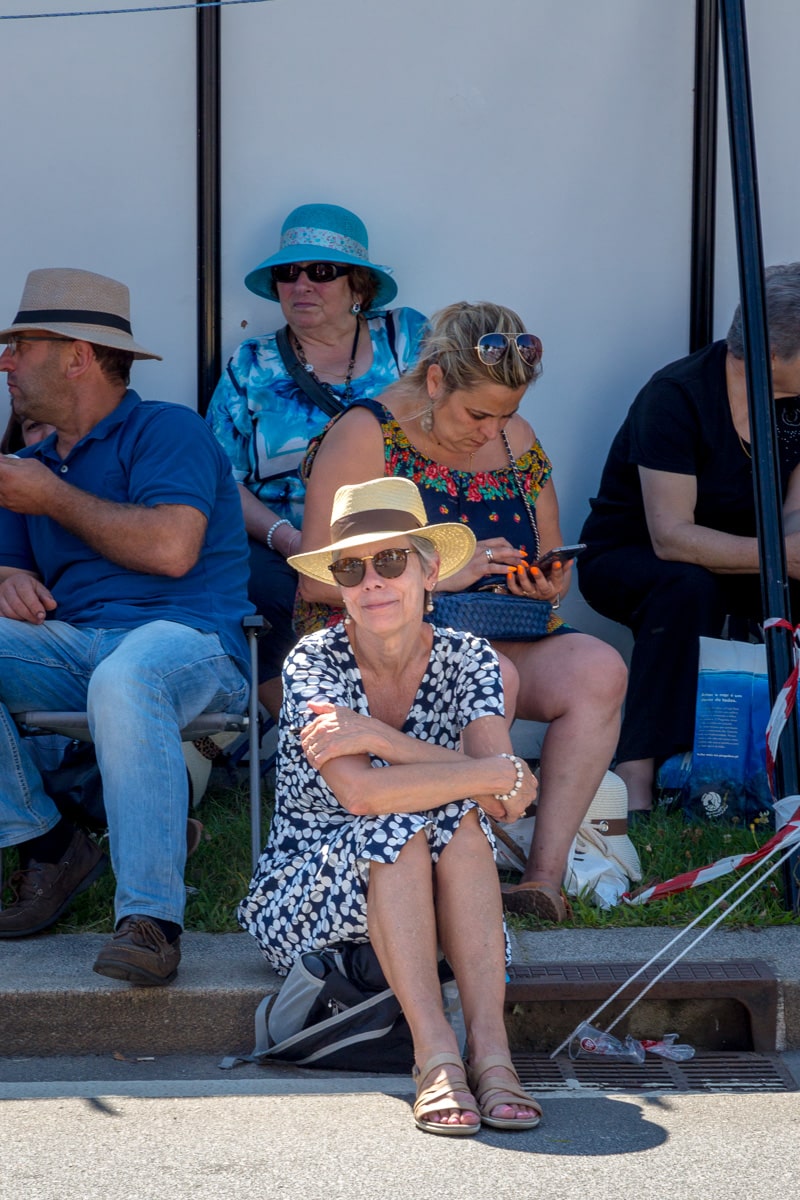 By the time we made our way to the parade route, there were no spots to get out of the sun and still have a place to photograph the event. A band came along first, in a slow march, respectful and reserved. They were followed then by women and children in colorful traditional costumes and jewelry. 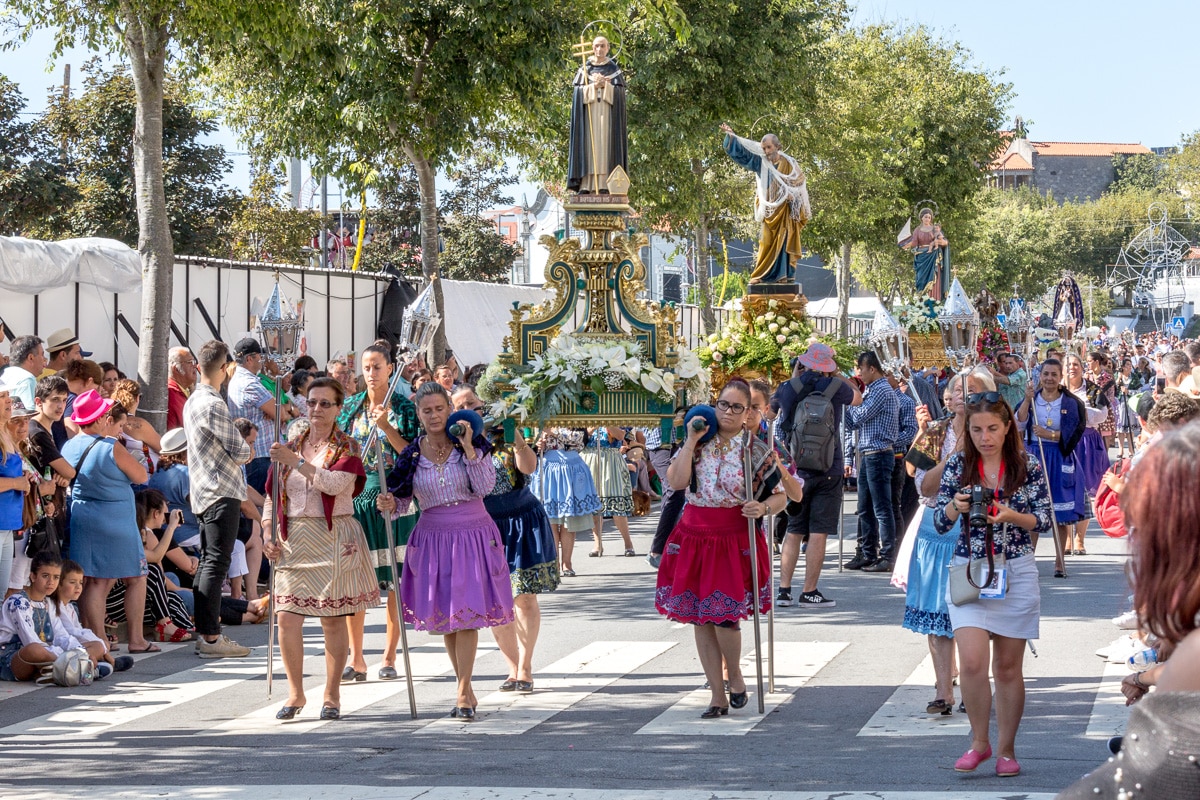 Next came a large figurine of a saint on an elaborately decorated float carried on shoulders of 4-8 men, with women at the corners some carrying lamps. This sequence was repeated several times until several floats had passed. Then came members of the religious orders including the local Bishop, and lastly by local politicians and dignitaries. 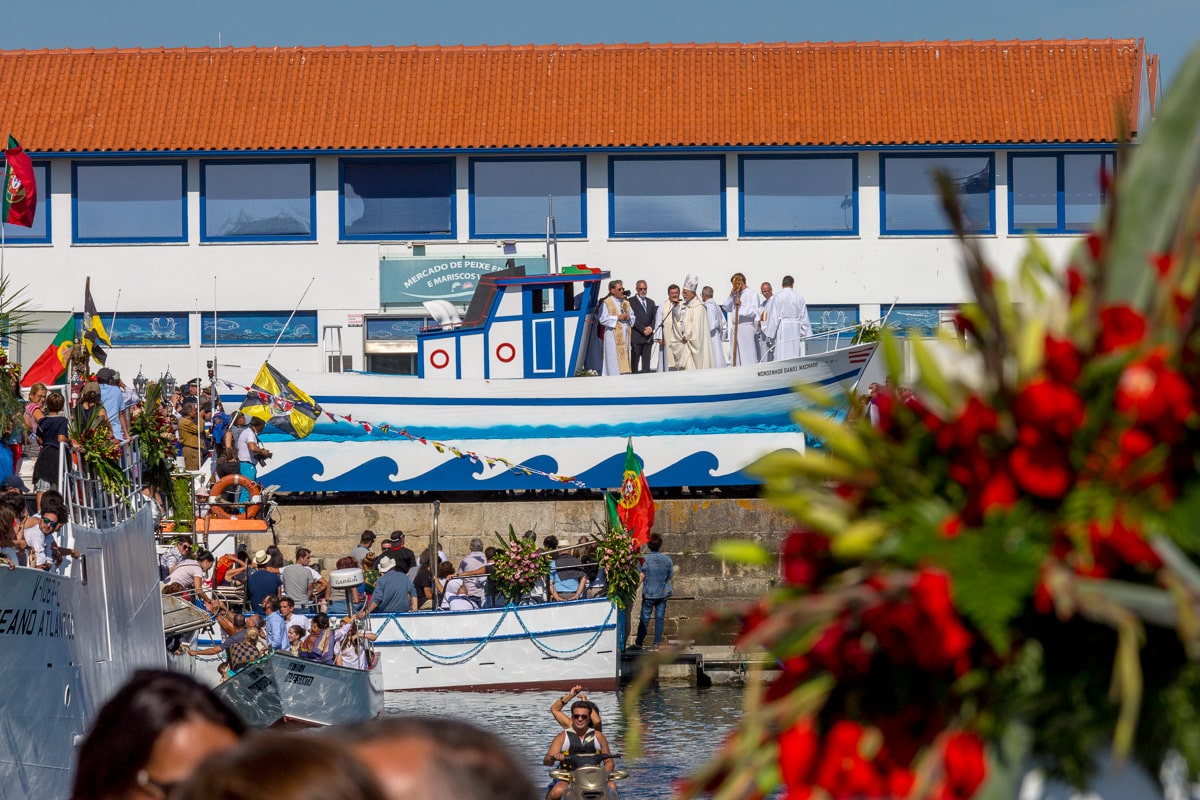 We followed the procession to the water to see the floats loaded onto boats for a trip to sea and back, but the crowds made it impossible to really see anything. Staying as long as we could, we had to allow time to locate a café for a beverage and rest before the train. Just away from the crowds, we found a nice shady café filled with locals. Ahh. It was there we realized that we really hadn’t seen the town, hence the “problem” mentioned in the first paragraph. The Festival and crowds had taken all of our attention away from what would, at any other time, be a charming place to visit. Well, we still have time, maybe … 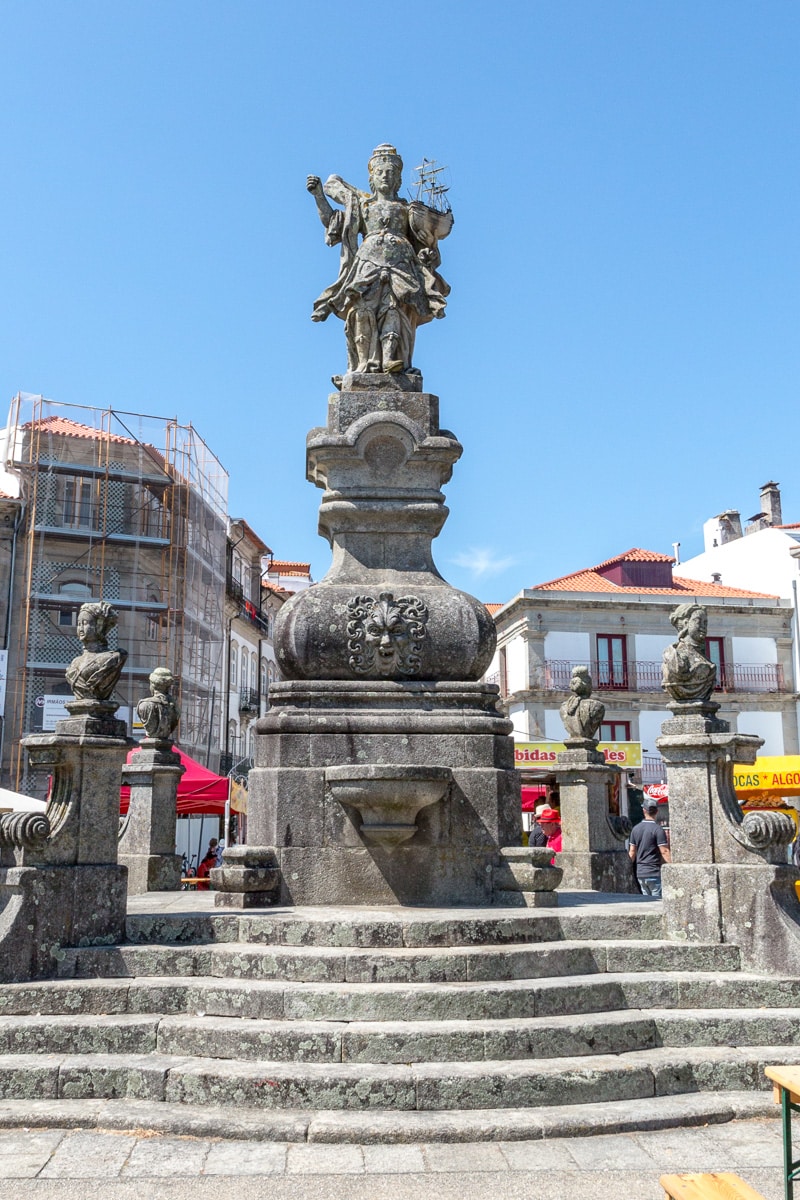 When time came to head to the train station we picked up a sandwich for the 1.5 hour return. But on entering the station, we found huge crowds waiting. We assumed it was for an earlier train as we still had 40 minutes before departure time. But as the crowds grew and people started boarding the train, Chris went to check if that was actually our train. Yes it was and yikes! Well, by then we barely got on with no chance of having a seat for the return.

Inside the car, it was standing room only, but at least the A/C was running. The crowds were still growing outside. Soon another car was added to our train and the people waiting outside boarded that. Then our lights and A/C went out. Ugh.

Finally the power returned, the A/C restarted and we pulled out of the station, very fully loaded and at least about 30 minutes late. As we moved along, everyone’s mood lightened. There was lots of talking and joking from one end of the car to the other. 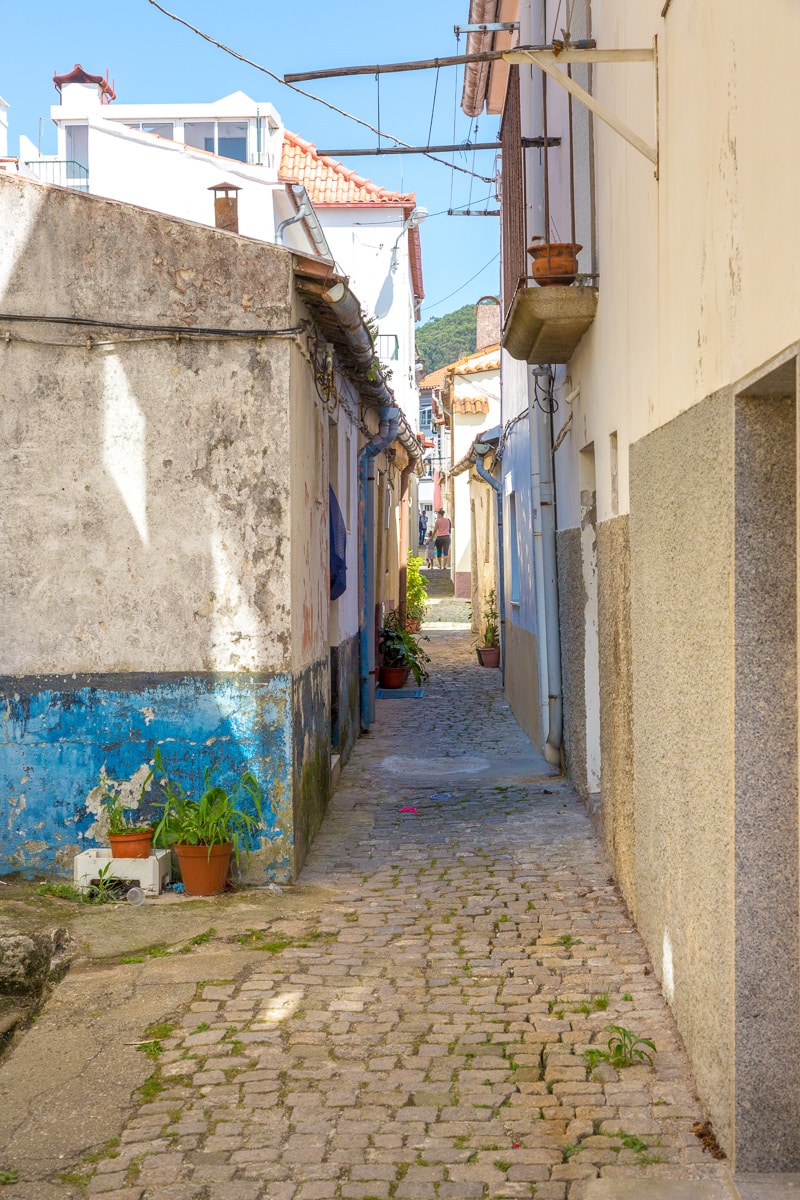 nie, tired of the full day’s walking, sat on the floor for a while, using a thin cushion we keep in our backpack, when a young man stood and offered Jeannie his seat (at the prodding of his wife).

We had plenty of time to observe our fellow travelers, and it soon became evident that those around us belonged to one family. It was fun identifying parents, cousins, aunts, uncles, kids, etc. simply based on their interactions. Their conversations and expressions were the same in any language or culture.

There were lots of family discussions and interactions as they passed a baby and young boy back and forth keeping everyone entertained. The closer we got to Porto, more and more passengers got off leaving us in the middle of this large family. 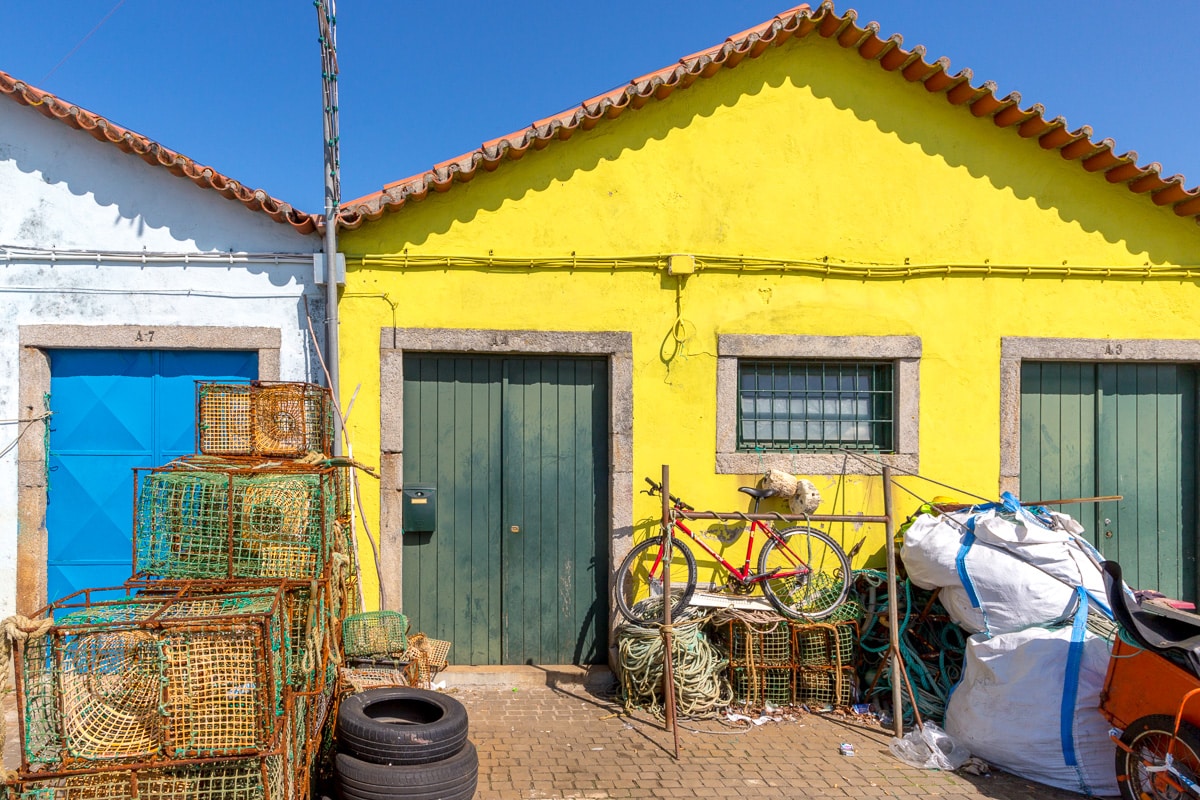 We didn’t understand any specifics of their relationships, and they knew we weren’t Portuguese but looks and smiles were shared freely. And our presence was accepted. As their station came up and they gathered their items, Chris offered his thanks for the experience, “Muito obrigado!” He then asked one woman who did speak some English to explain that, for us the experience was a wonderful example that families are the same everywhere! Cheerful good byes were said as they left the train.

When we finally arrived in Porto, we took the metro to our neighborhood, walked home, and finally ate the sandwiches we had hoped to eat on the train. Exhausted, we slept soundly remembering the many good experiences of the day.