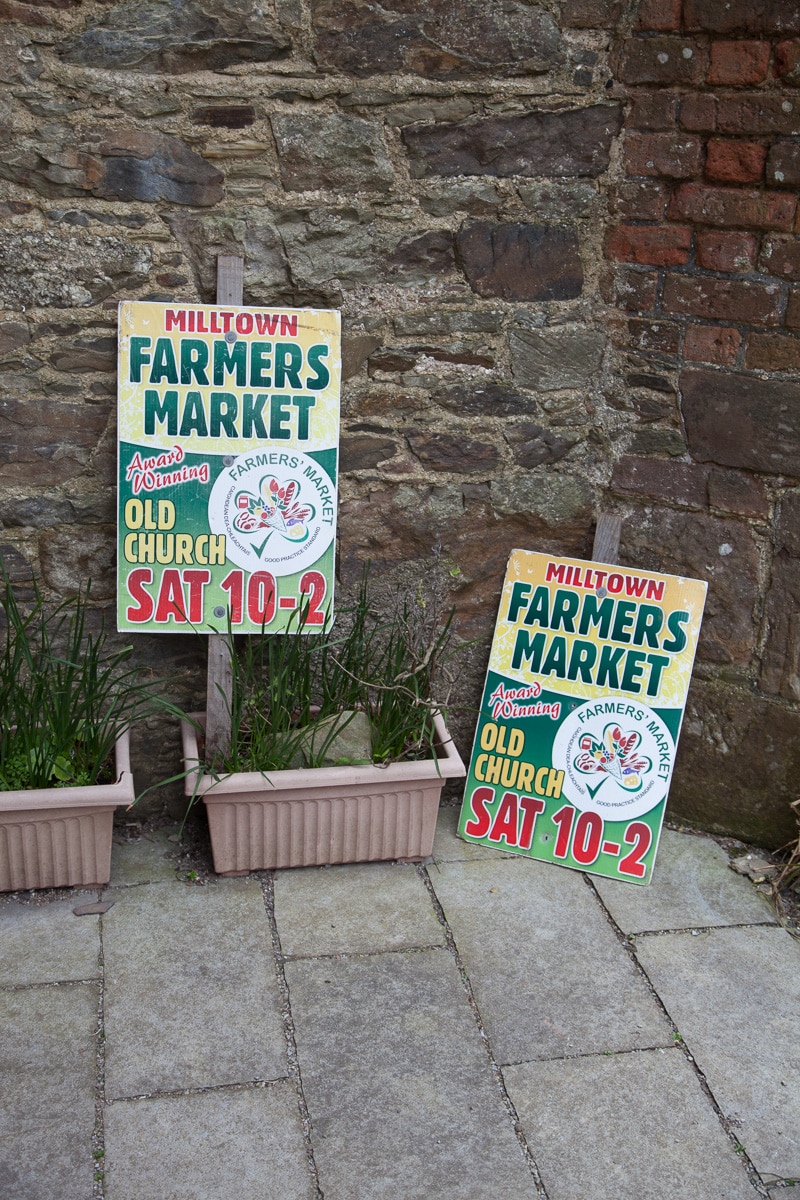 While it should be referred to as the Dingle Ring, since like the Kerry Ring, it “rings” the coast of the Dingle Peninsula, it likely sounded just a little odd. Besides, it is very different from its more famous neighbor.

The entire loop from Killarney is only about 180km | 111mi long and can be driven in a day, but it deserves much longer. We arranged to spend two nights in the harbor town of Dingle so that we could take our time.

Our plan was to depart early so that we could make a short stop in the little village of Milltown for their Saturday farmer’s market.

As we entered the town, we parked in a convenient spot that luckily was just in front of the old church where the market was held … inside. It was a small delightful selection of local vegetables, bread, pies and other baked goods, cheeses, crafts, as well as prepared Middle Eastern and Thai dishes. We picked up some of the local cheese and even a couple of falafel for a later snack, then resumed our journey. 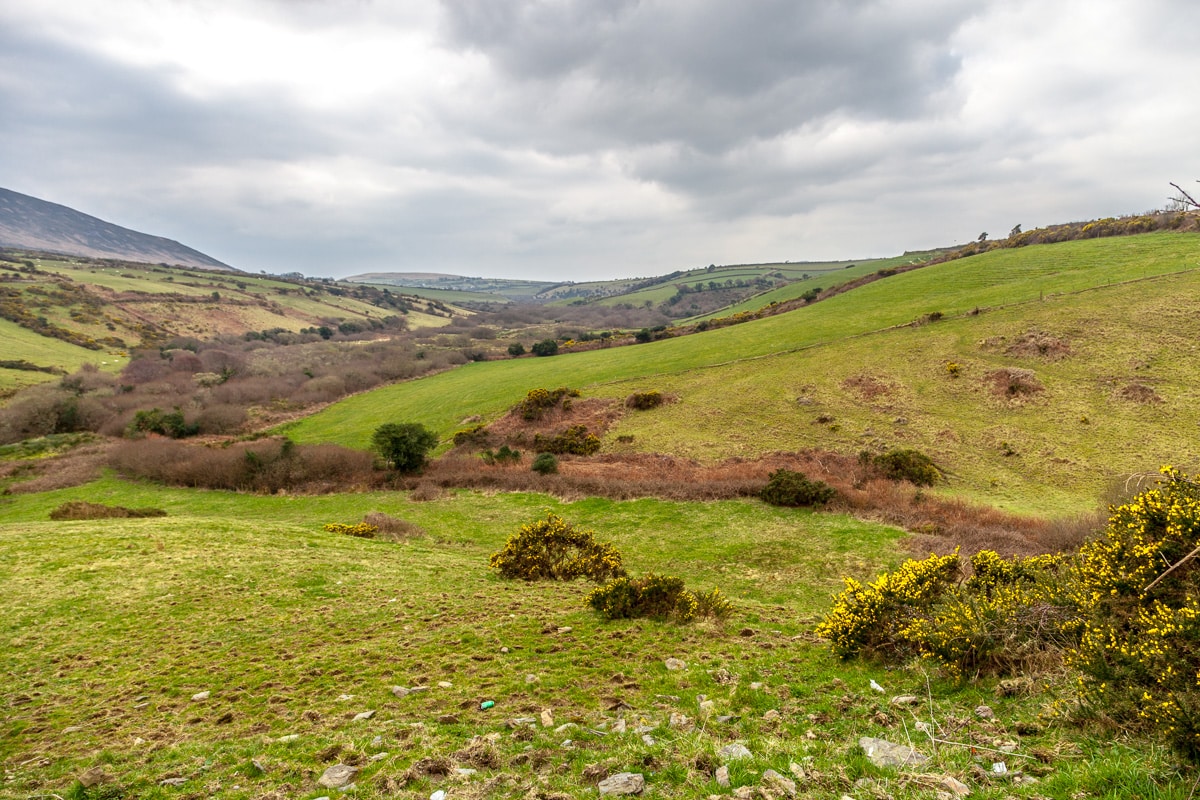 The advantage of traveling to a place like this in the off-season is that the crowds haven’t arrived. We pretty much had the roads to ourselves, shared with only the locals who likely complained about how slowly we negotiated the winding, narrow lanes. Fortunately too was the lack of large tour buses that will jam the roads during the high season making driving even more harrowing. 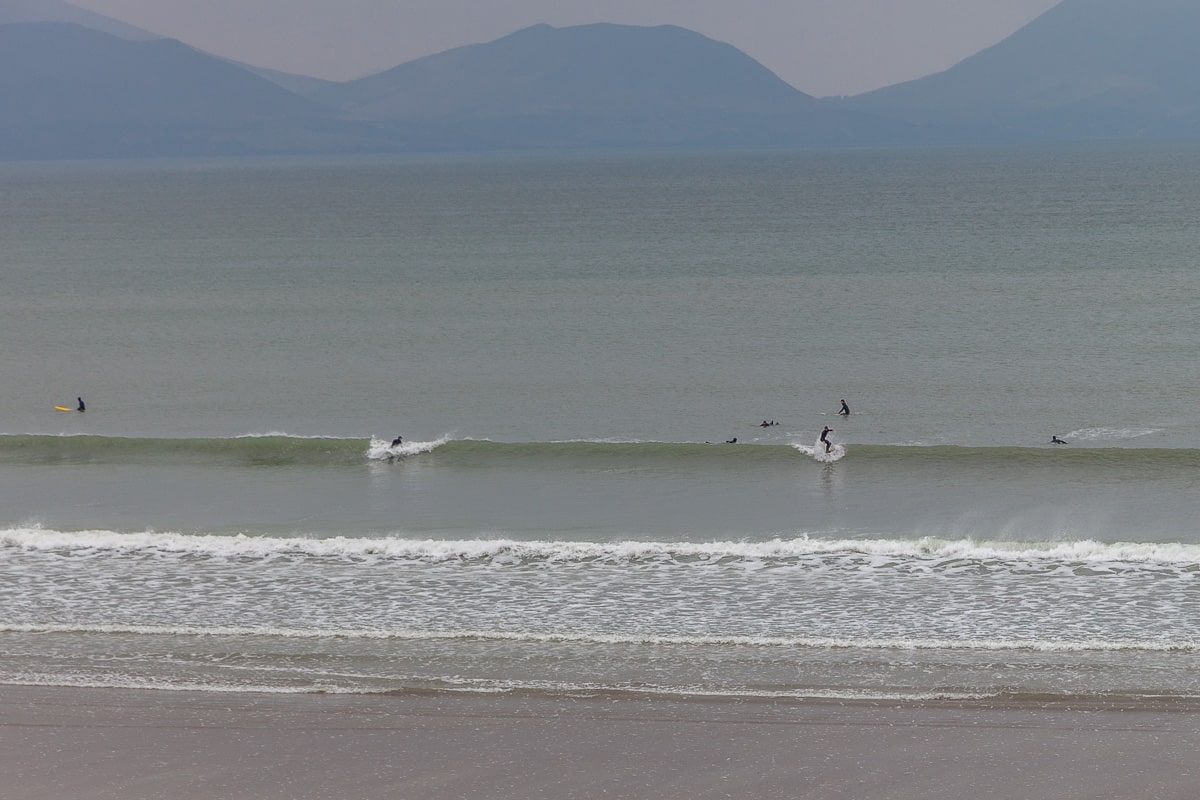 Making our way along the Southern coast, we wound our way around the central mountain spine that slopes down to the Atlantic ending in either rocky precipices high above the water or on long sandy beaches. One such beach was Inch Beach where dozens of wet-suited surfers were braving the cold water and cloudy skies for short rides in the 3-4 ft waves.

National Geographic once called the Dingle “the most beautiful place on earth”, and this drive certainly showed off the beauty. We passed through stone-fenced, green pastures dotted with sheep, surrounded by high rounded mountains. 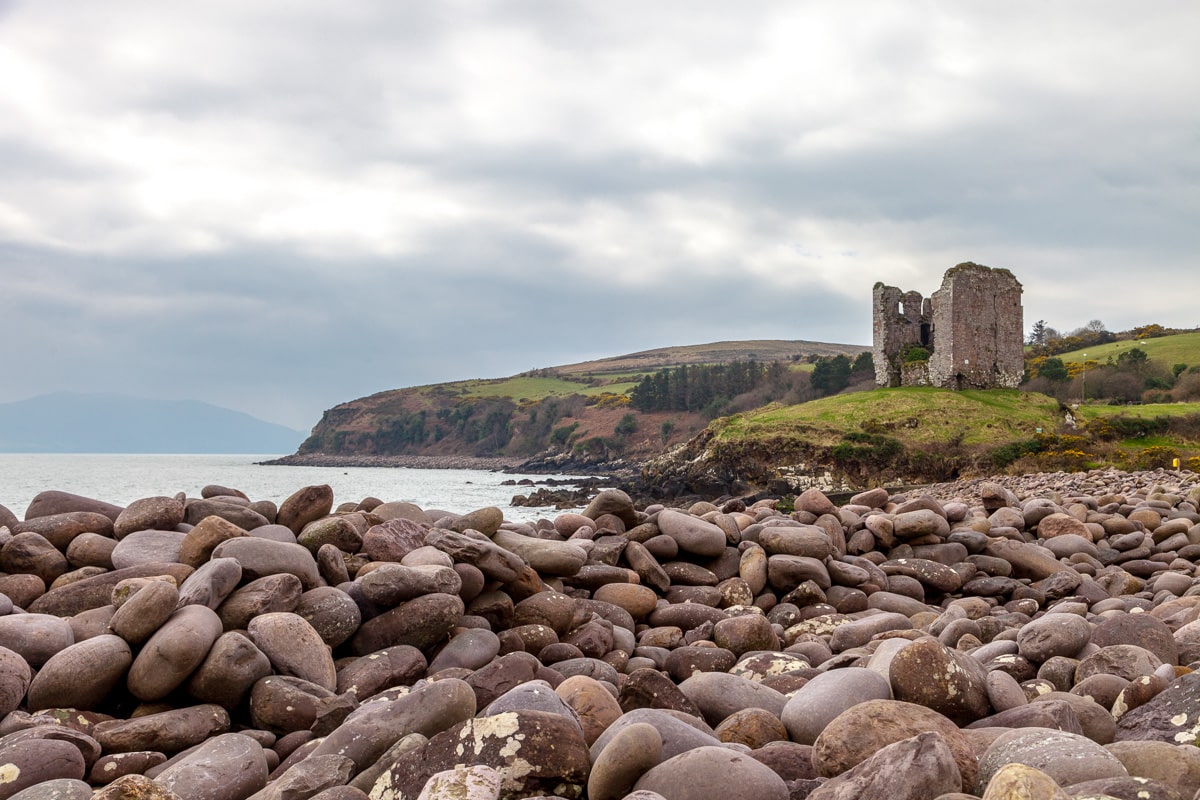 We took a detour off of the main road to drive down to the water to visit Minard castle, a 16th century coastal fortification. Commanding a position on a hill that overlooks a small bay, the ruins have a view of the Iveragh Peninsula across the Dingle Bay.

The beach, below the castle, was covered with large boulders rounded by rolling on the sea floor and then thrown up by the sea during violent storms. This natural storm beach is considered one of the finest in Ireland.

After a small snack of the cheese we had purchased earlier, we drove the final few kilometers into Dingle where we quickly located our lodgings for the evening – Bambury’s Guesthouse. 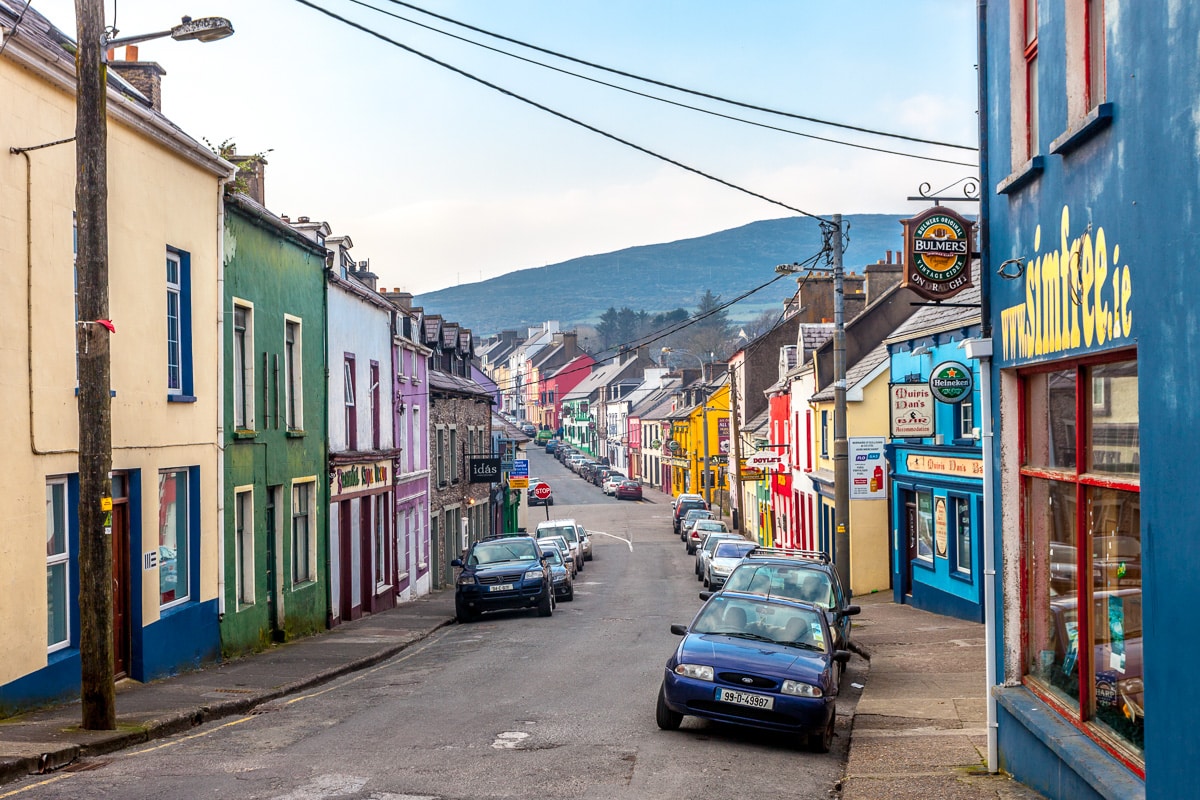 Dingle is a much larger harbor town than Portmagee, on the Ring of Kerry, and as such was far more bustling and busy. There were far more tourists here, possibly since Easter was the following weekend and people often take the week before or the week after for holiday.

We spent the remainder of the afternoon exploring the town, having a pint of Guiness at a local pub, and planning the next day’s adventure.

That evening we ate some of the seafood that the area is famous for. The little restaurant we chose was Out of the Blue, and they only serve seafood, and only fresh seafood. In fact the menu depends upon the catch of the day and if there’s no fish, the restaurant doesn’t open. Needless to say, it was delicious.

The next morning after a hearty Irish breakfast, we took off on the she Slea Head Drive, a circular route that is part of the Wild Atlantic Way, and begins and ends in Dingle. The route takes in a large number of ancient sites and stunning views on the western end of the peninsula. Due to the isolation of the area, it’s rich cultural heritage and ancient archaeological treasures have been well protected. 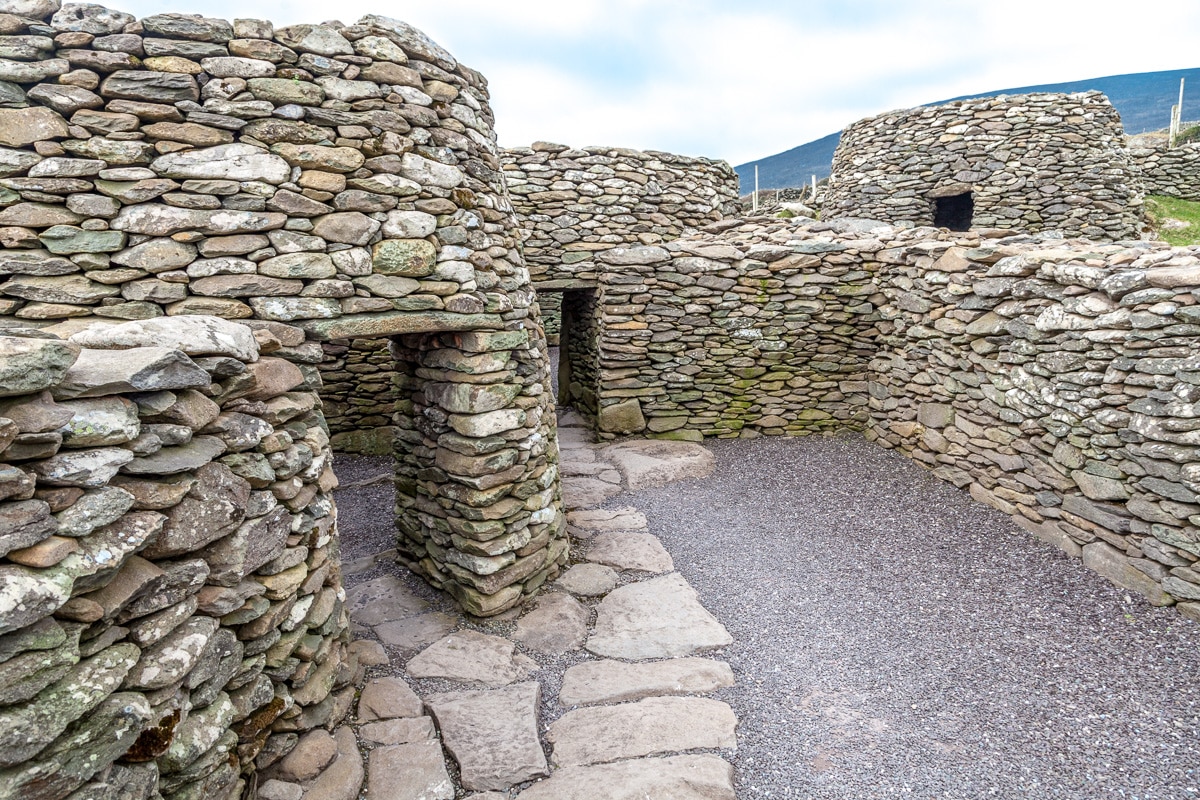 We came upon a collection of Clochan or beehive huts (because of their shape) at Fahan.  These mysterious stone igloos, are clustered together within a circular wall and are said to be among the most notable in Ireland.

Also nearby was Dúnbeg Fort, an impressive example of a promontory fort. Built on a sheer Cliff over Dingle Bay it is composed of a series of defensive ramparts and ditches around a central clochan. There is evidence of the fort dating back as far as 580 BC. Unfortunately, in early 2014, serious damage was done to this important Iron Age fort when much of the western wall of the dramatically perched cliff stone structure fell into the sea. 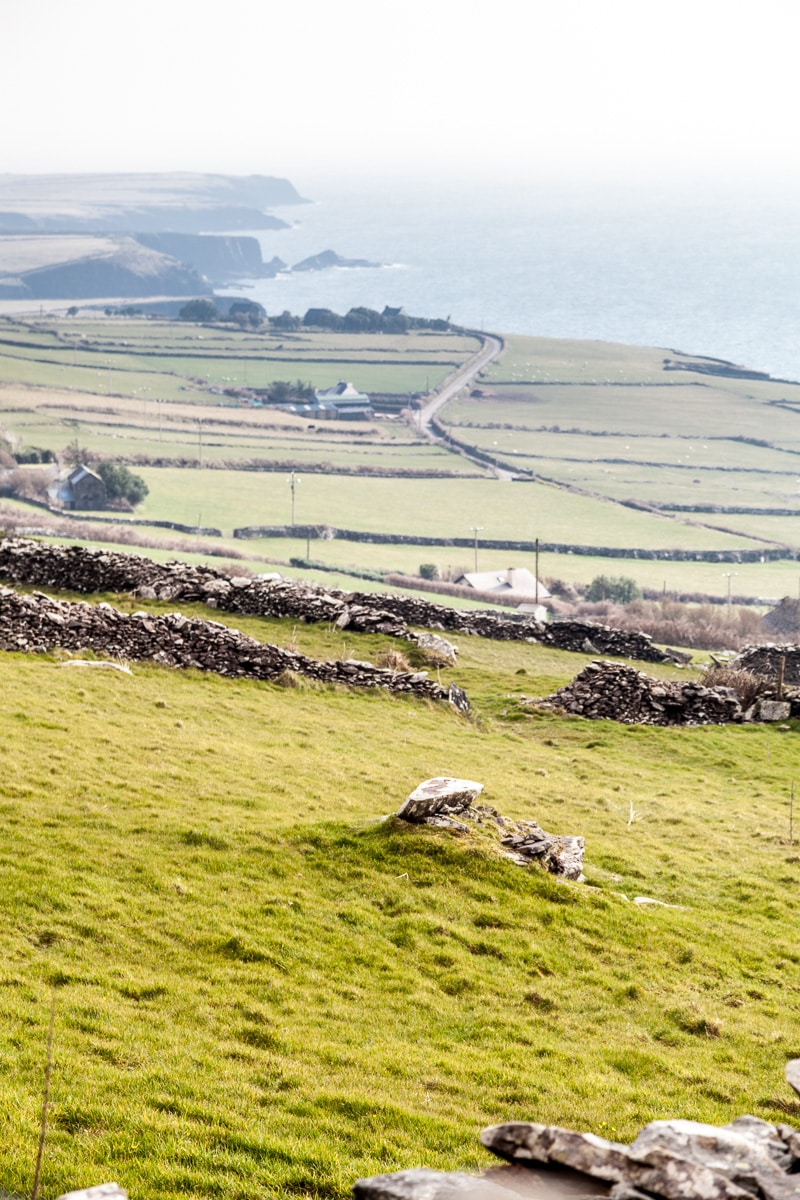 Feeling the need to get out on a more strenuous walk, we located a section of the Dingle Way, a 162 km | 100 mi long-distance walking trail around the Dingle. The trail uses the roads and lanes as well as footpaths as it winds through the countryside.

Though the route began on a small, narrow country lane it moved steeply uphill onto small farm tracks, then crossed over a fence onto a footpath. Typically following one of the many stone walls that crisscross the entire area, we continually dodged sheep and their droppings. All the while we were treated to grand views over the mountains, countryside, and coast.

Returning to the car, we continued on where a small stream crossed the road. There has never been a bridge here, and this bit of road, designed as a ford, is nicknamed the “upside-down bridge”.

The road hugged the high cliff as it moved in and out of the rocks and around Slea Head itself, with dramatic views to South Kerry and the Blasket Islands. The drive then followed the coast north, to Coumenoole Strand, where we took time for another brisk walk.

It didn’t take too long back on the road before we came across another beautiful place on the coast where we had to stop for another hour or so walk. The day had turned sunny, so despite the cold ocean wind the weather was delightful. 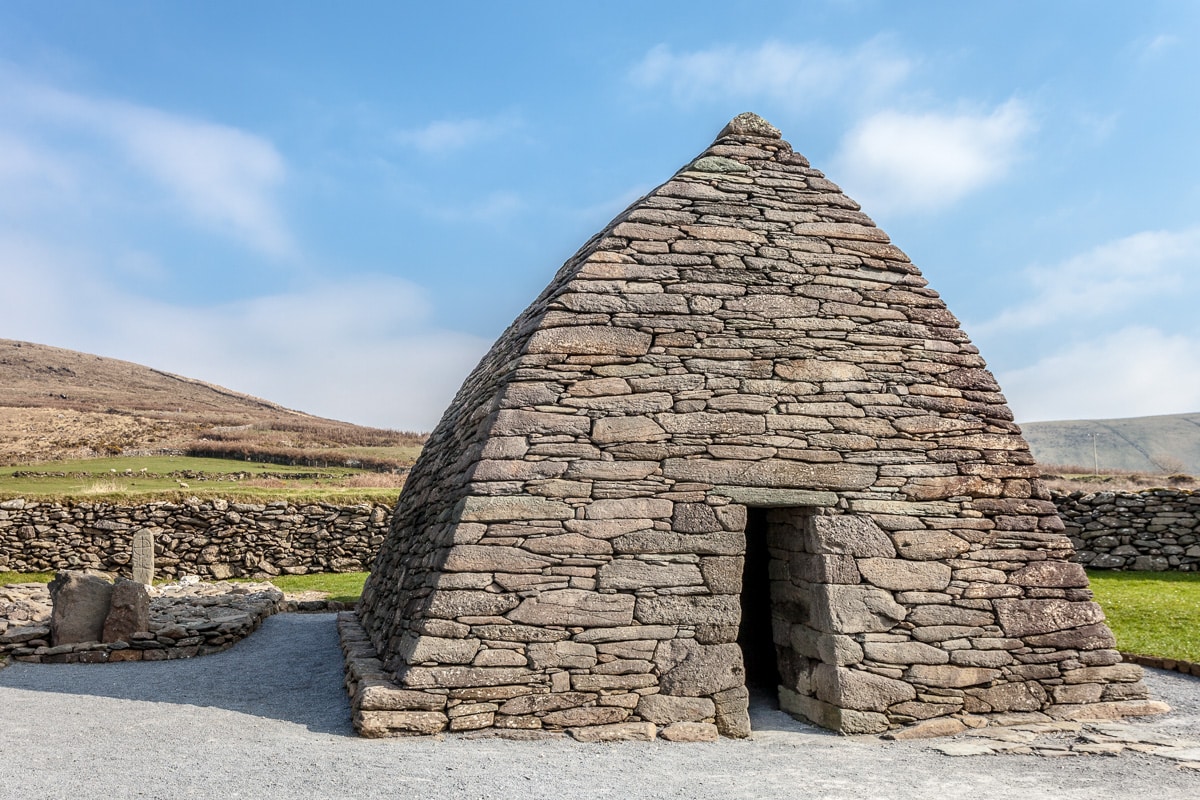 By now we were ready to begin moving back towards Dingle, but we had one more stop to make. Located in farmland about 8k | 5 mi northeast of Dingle stands the Gallarus Oratory, a small, interesting structure well over 1000 years old or even older. Shaped like an upside-down boat and built stone-on-stone without mortar using an construction method called dry-stone corbelling. The construction epitomizes the height of the technique first developed by Neolithic tomb makers. The stones were laid at a slight angle, lower on the outside than the inside to allow water to run off. It is unusually well preserved, and still waterproof, despite the battering it takes from the elements.

Close to the building is a small stone slab, about a 1m | 36in tall, that stands facing the structure. Carved into this slab is a Celtic cross — a cross within a circle, as well as some writing. 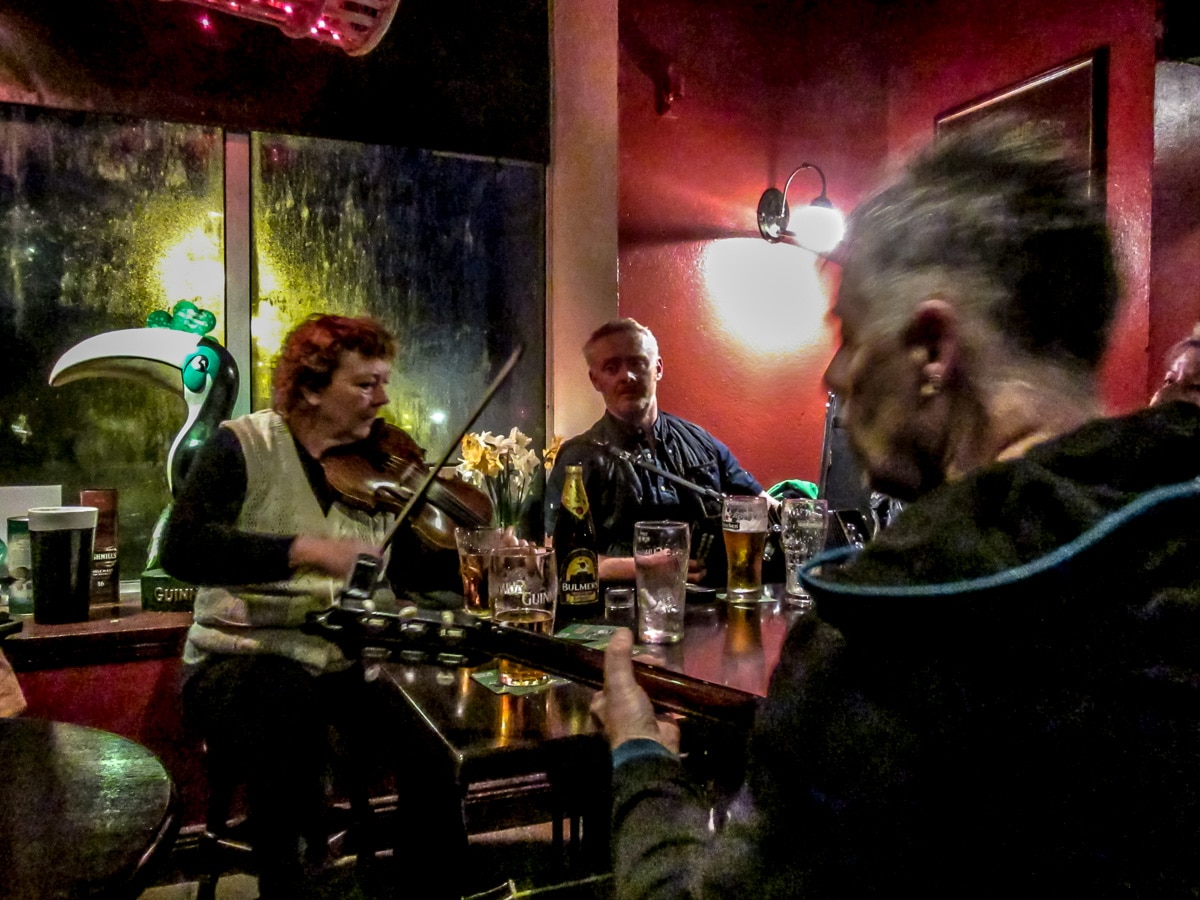 Fortunately we weren’t too far from Dingle, and were getting hungry. So we drove back and got ready to go out for an early dinner. After a stroll through town, we stopped by the Marina Inn for the food and drink, but also for the music which on Sunday is traditional acoustic open-set style, and it started early.  Dingle Music 1  The musicians were all local and together with a couple of drop-ins the music was foot-stomping good. We were lucky to have a table right next to the performers, and were able to chat with them between tunes. It was a delightful meal and some wonderful music in an outstanding setting. It doesn’t get any better … or does it?