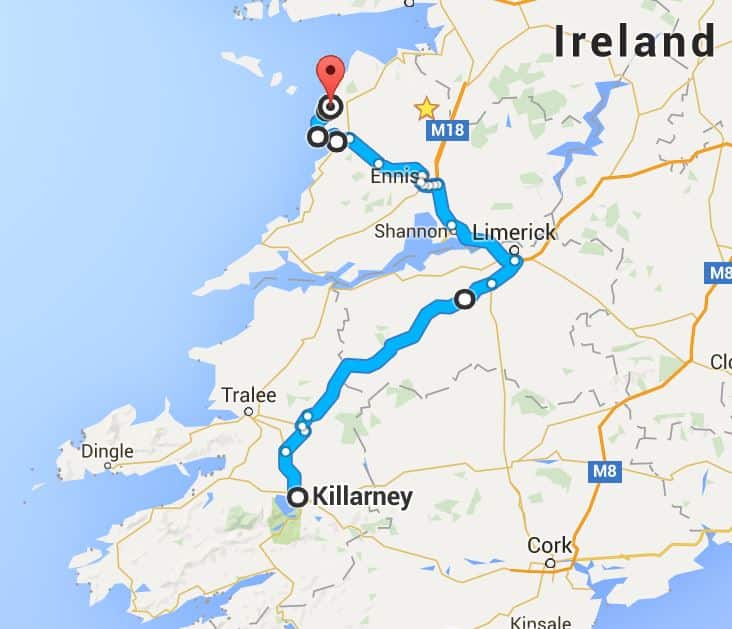 After a month in Killarney and the surrounding areas, we were moving on. We had nine days to get to Dublin to take the ferry to England. So, where would we go in the meantime? 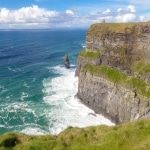 Having a car meant that we could go pretty much where we wanted. So, we looked at a map and some travel guides, and thought about going here and there, and there, and there, and after a while, it appeared that we would be driving every day, and staying in a different place every night. Nope, we aren’t going to do that.

After a little discussion we decided to spend the time in two places only. The first location was Doolin, a very small village known for its proximity to the Burren National Park and Cliffs of Moher, two places of significant natural and geological reputation. Equally appealing however, was the significance of Doolin as a center of traditional Irish music.

After Doolin, we would then go to Kinnitty, in the Slieve Bloom Mountains of the Irish midlands; but I digress. 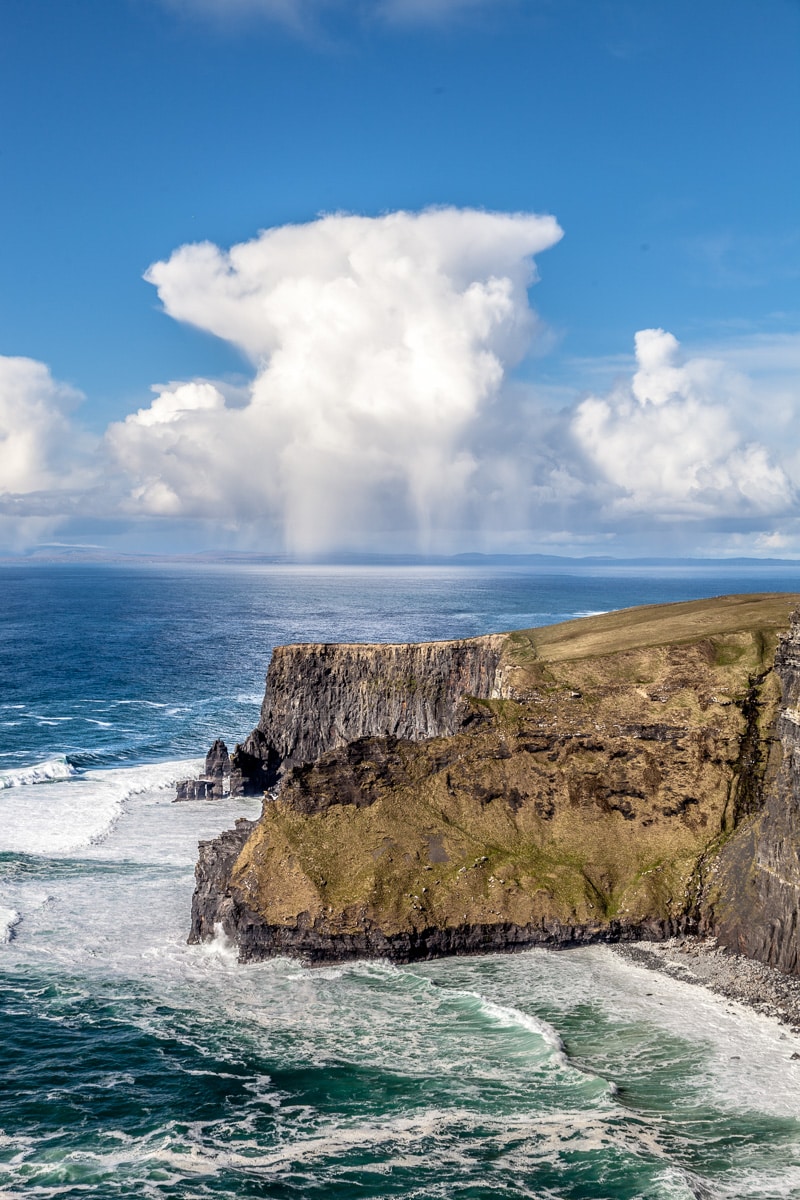 We had enjoyed a fabulous afternoon at the Cliffs of Moher the previous day. The sky had been blue with large, puffy clouds, and the temperature reasonable though still quite cool. Our walks to dinner and, later, to the traditional music session nearby were delightful

Today, however, we woke to different conditions. Overnight, the winds had increased significantly, the sky was quite gray, and though it wasn’t raining currently, it appeared as if it could begin at any moment.

We made our way downstairs to the dining room of our B&B where a selection of home grown and locally sourced starters awaited. Fresh yogurt, jams, breads and cereals, along with an assortment of cheese, salami and smoked fish whetted our appetite. Darra and Niall then prepared a delightful full Irish breakfast for me, while Jeannie had the porridge, served with a shot of Bailey’s Irish Cream as a topping. This was a breakfast that would see us through the day to come. 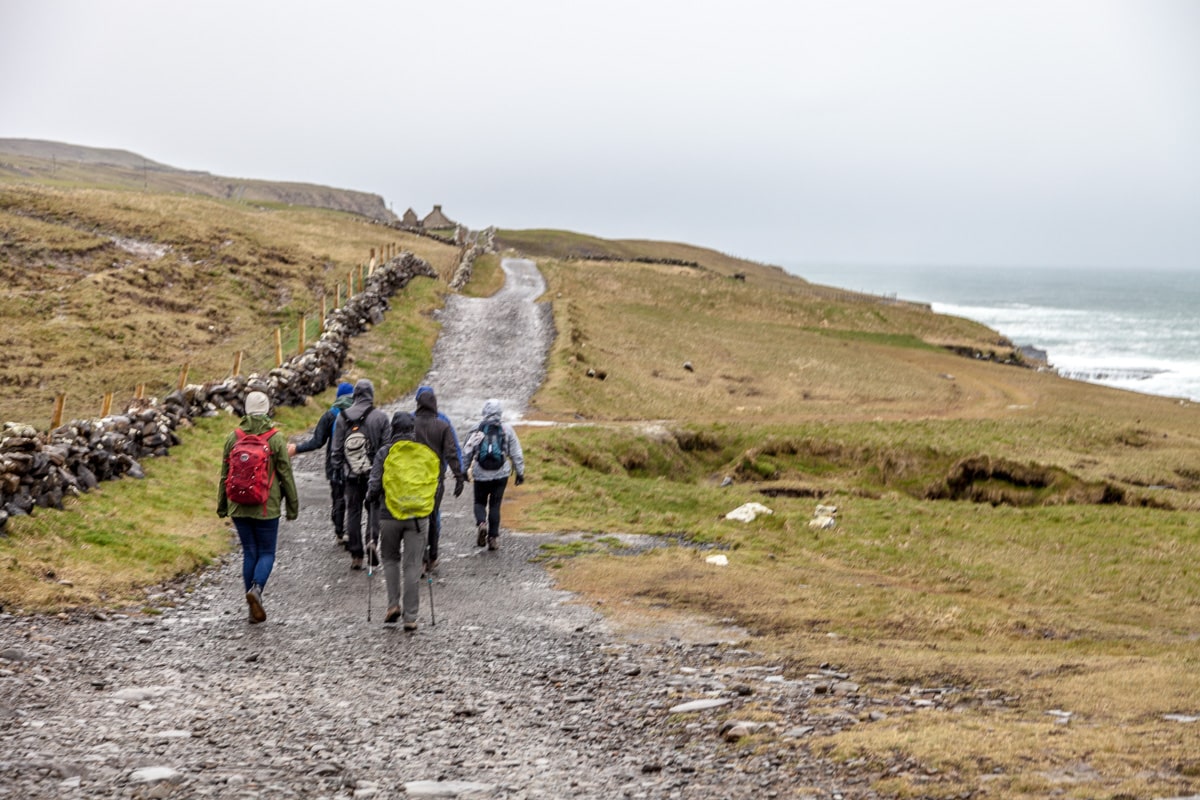 Our day’s plan was to join local guide Pat Sweeney across the street for a group hike that would take us from Doolin, following a 5-mile trail that runs along the edge of the Cliffs of Moher, all the way to the visitor’s center that we visited the day before. For those who don’t know, the Cliffs of Moher were featured in the 1987 classic, fairy-tale adventure film The Princess Bride where they were known as the Cliffs of Insanity, hence the title of this post.

As we joined the group and took off on the hike, the rain began, though lightly. The moisture refreshed the Irish mud that, along with rock and stones, formed the surface of the trail. 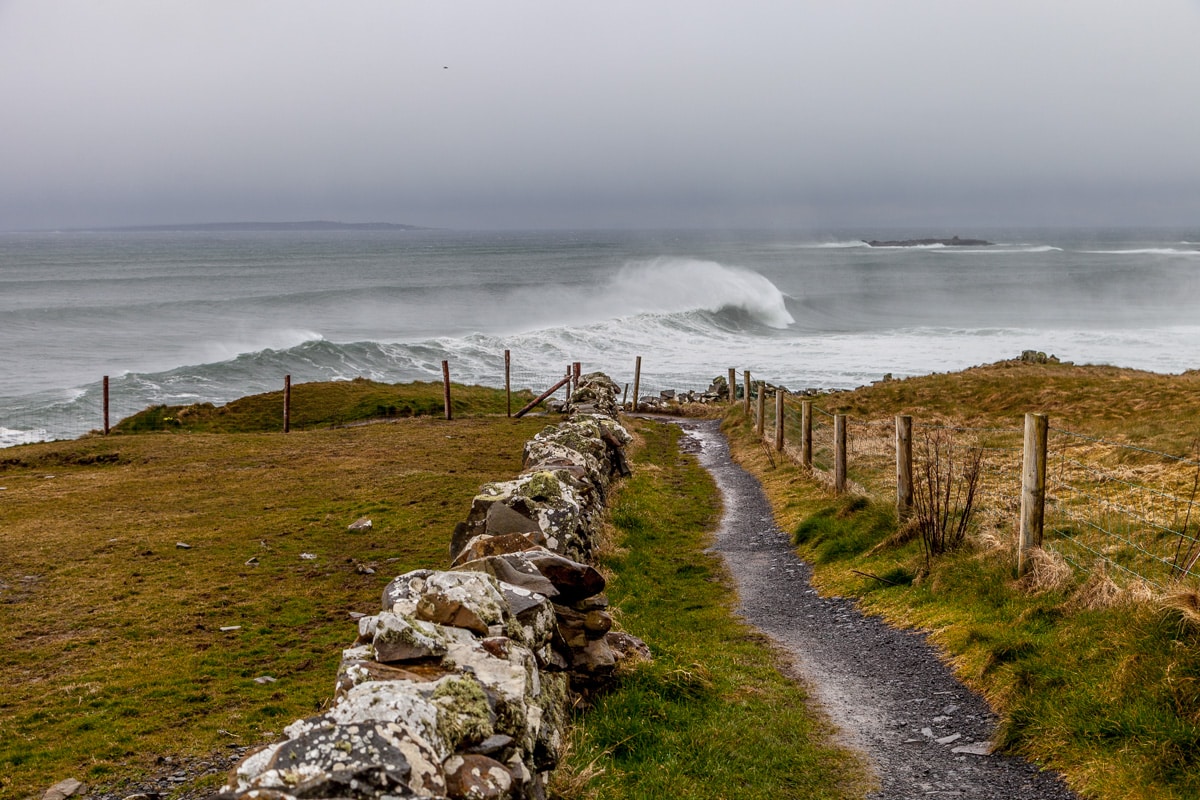 As we climbed towards the edge of the cliffs, we were still “relatively” close to sea level. The large waves that rolled in from the North Atlantic were met by strong off-shore winds that blew clouds of spray from their cresting lips.

The route continued to climb as we made our way along the slippery and uneven trail, precipitously close to the edge, where waves crashed onto the rocks more than a hundred feet below. Our guide Pat moved swiftly as a mountain goat leading most of the group (all much younger than us of course) at a quick pace. Jeannie, even using her hiking sticks was feeling somewhat less surefooted and moved carefully as the group occasionally walked ahead then patiently waited.

The scenery became more dramatic with each step as the route continued to climb. Higher still, we were now even farther above the crashing waves than before and still climbing. To the inland side the sheep grazed as we walked past a centuries-old, stone wedge tomb.

The winds kept increasing as well. Normally the wind direction is on-shore, meaning that it blows in from the sea and away from the cliff edge. However, today, the winds were off-shore, gusting from the land towards the sea; and over the cliffs. 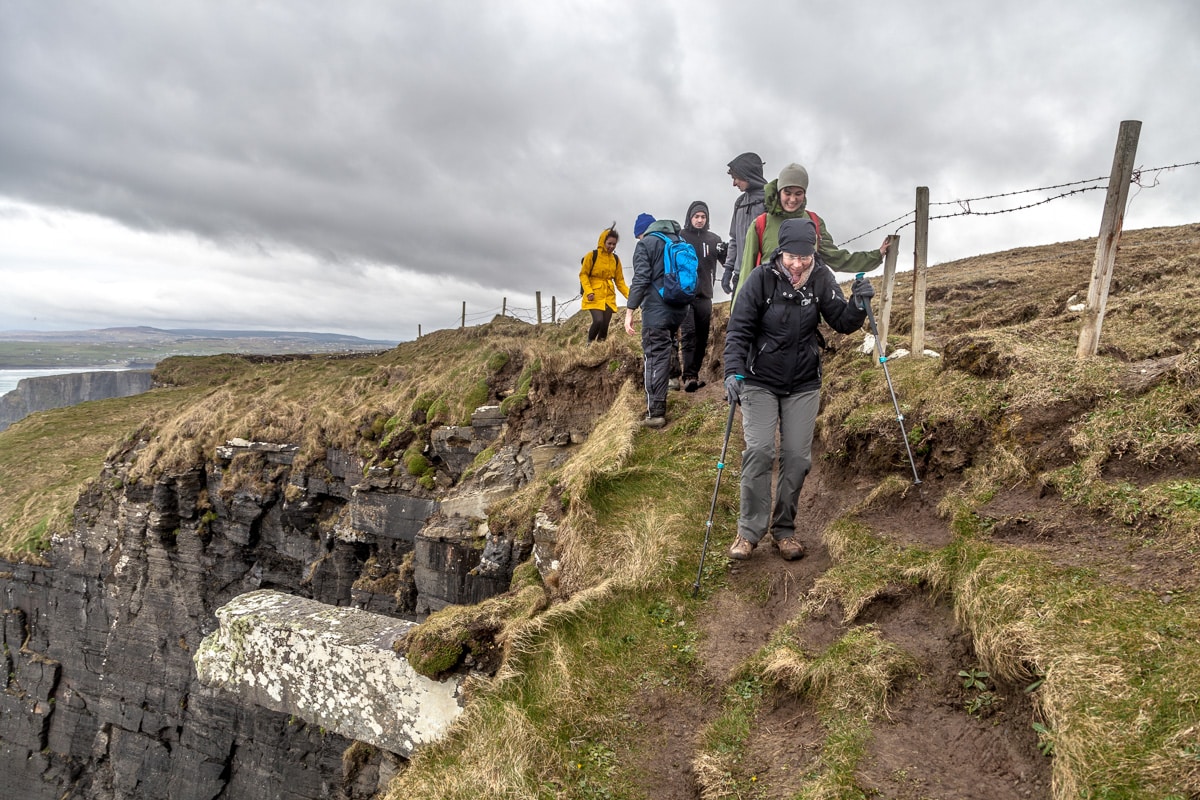 Beautiful, dramatic, and treacherous. The views were breathtaking, unlike any that one could get from the Visitor’s Center. The trail continued to climb and the winds kept increasing as we wound our way along the precipice over small streams, balancing on muddy rocks as gale force winds threatened to toss us over the edge.

Occasionally stopping in the lee of a large rock or small mound, we were glad to get out of the wind. As we rested, Pat would tell us stories of the trail and adding his unique local insight into the Cliffs themselves. 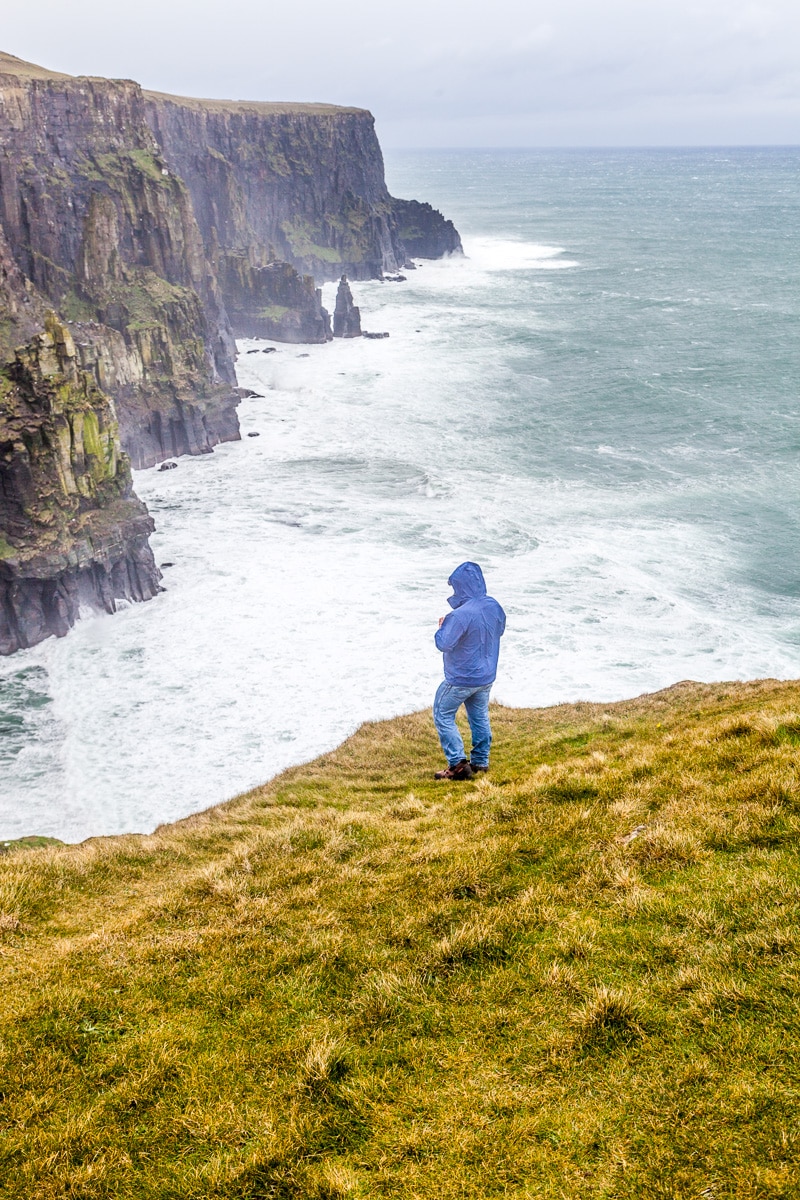 The closer we got to the end of the hike the rains sporadically changed to sleet, driven by the ever-stronger winds, stinging our faces. At one point, as we emerged from the limited shelter of a small outcrop, the gusts of wind were incredibly strong. As Jeannie stepped out, she slipped in the mud just as a blast of wind occurred knocking her to the ground. Fortunately, we were not at the edge of the cliff, but as she recovered another gust ripped the rain cover off of her backpack sending it away over the precipice, soon followed by her hat.

Jeannie struggled to her feet, Pat assisted her to make the final climb up towards the improved path near the Visitor’s Center. The winds never relented, and we soon arrived in the shelter of the visitor center. It was then that Pat shared his estimate that the winds were very likely in excess of 50 knots. It was truly an exciting and memorable day, sometimes scary given the weather. Would we do it again? Absolutely we would, but likely not in the same conditions. 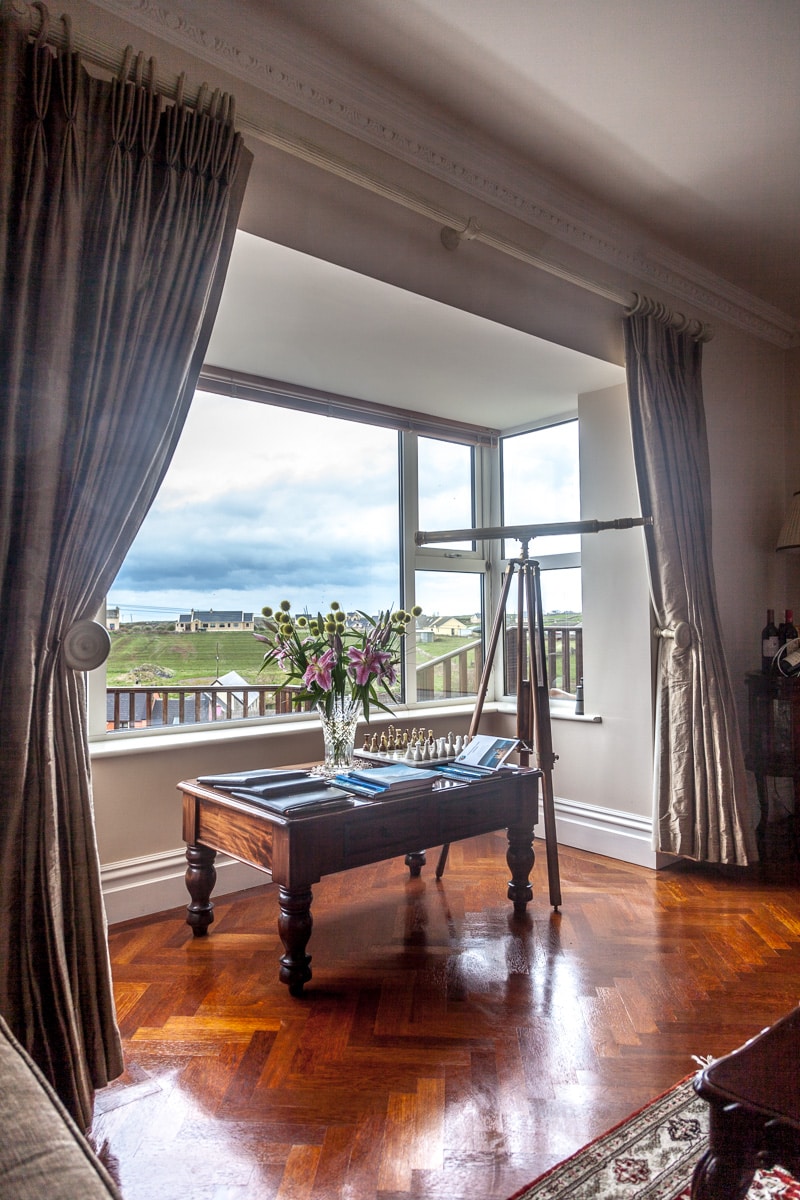 Taking the bus back to Doolin and our B&B, we got cleaned up and rested in anticipation of a meal and traditional music at O’Connor’s Pub.

It turned out to be a great evening of music with new friends, Melissa and Shaun, who were also on the cliff hike. A good meal, several pints of Guinness, a lot of good music and conversation, and the day ended in fine style.

After we said good night, we walked back to our B&B, turned in and dreamt the dreams of hikers who could fly.