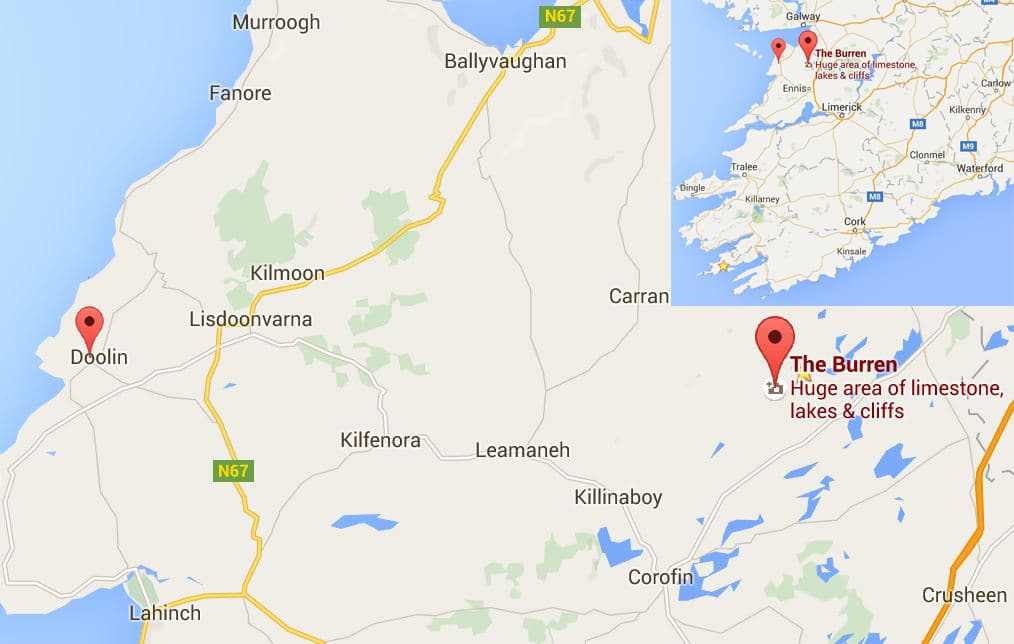 After the excitement of the Cliffs of Moher walk the previous day, we were in the mood for something a little less, shall we say, perilous? Not that it wasn’t really fun, but Jeannie really liked the hat that was blown off the cliffs, as well as the pack cover that might be needed in the future.

One of the areas that we were especially interested in seeing was The Burren National Park. “Burren” comes from an Irish word “Boíreann” meaning a rocky place, and indeed it is an extremely appropriate name considering the lack of soil cover and the extent of exposed limestone.

Our research told us there was far more life and beauty to this area than just a barren moonscape, but again we felt that having a guide would help make best use of our time. So we were really happy that Darra and Niall, our hosts at the B&B, not only made a recommendation for a guide, but made the telephone calls and arrangements for us. 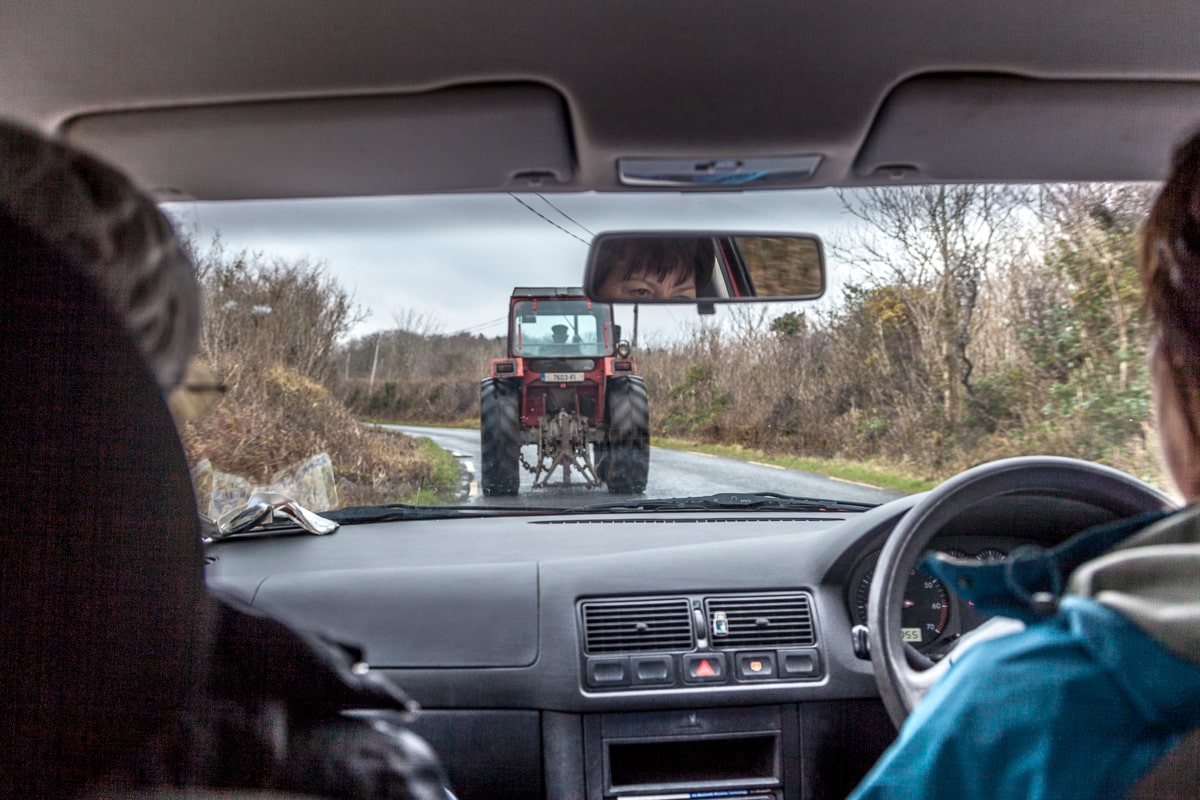 We met Marie Mc Gauran of Burren Experience Guided Walks and Alessandro, a young neuroscientist from Italy, in the small town of Corofin. Together we rode the 9km | 5.6mi to an area with excellent access to parts of the Burren. Marie’s family had been in the area for generations, and she knew the place and its stories well. 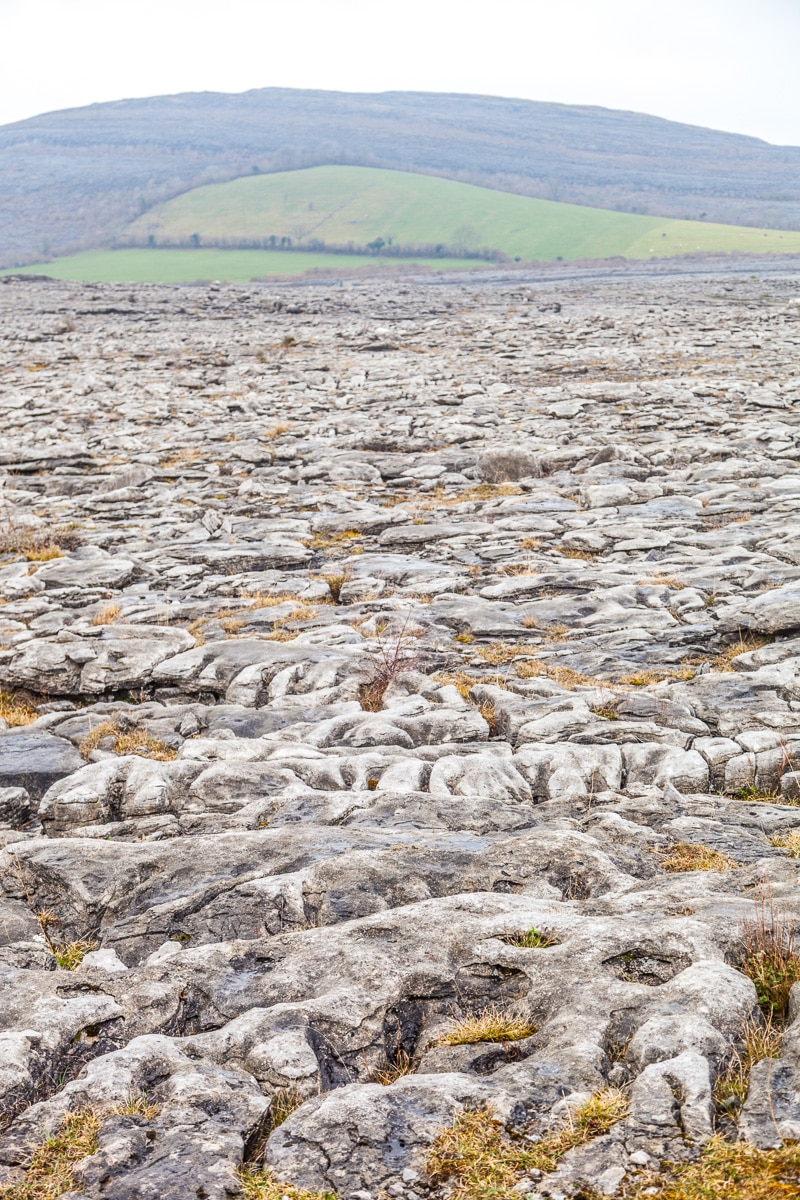 The Burren is an extensive, low lying area that at first glance consists entirely of rock, and appears smooth. The limestone pavement areas consist of “clints” – slab-like, flat areas, and “grykes” – fissures and cracks that run through the clints. Within the grykes, soil can accumulate, and sheltered from wind, can provide enough anchorage and nutrients for plant growth. Due to the lack of nutrients, water and soil combined with wind and grazing animals, all plants tend to be severely stunted. 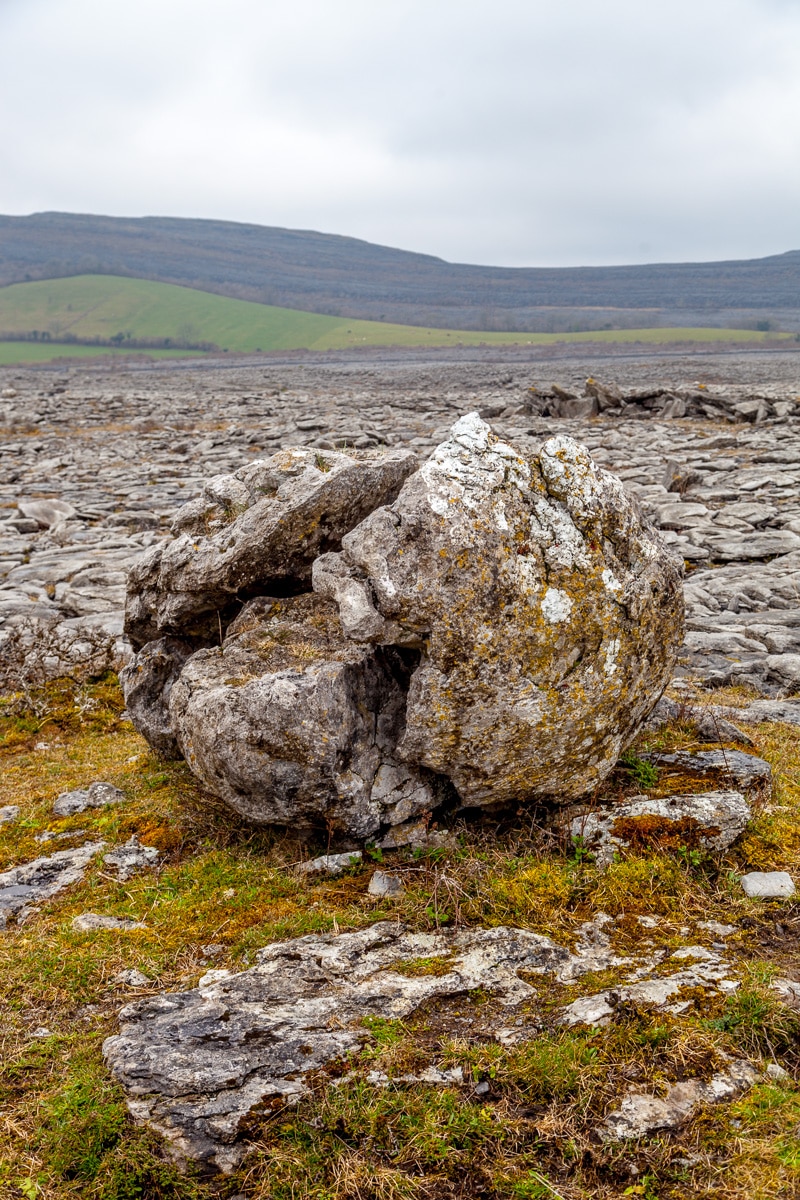 Over the millennia, the area has been heavily affected by glacial activity creating drumlins and moraines or low ridges in the surrounding landscape. The glaciers also moved and deposited large boulders sometimes referred to as erratics. There are many erratics scattered all about the Burren, some are very large and many with fanciful names based on their shapes.

It seems incredible that a population could eke out an existence in such a place. Yet, properly managed, animals could and still do graze on the plants that exist among the rocks. Furthermore the surrounding areas were able to support large crops of potatoes, a staple food source for all the people of Ireland as well as their livestock. 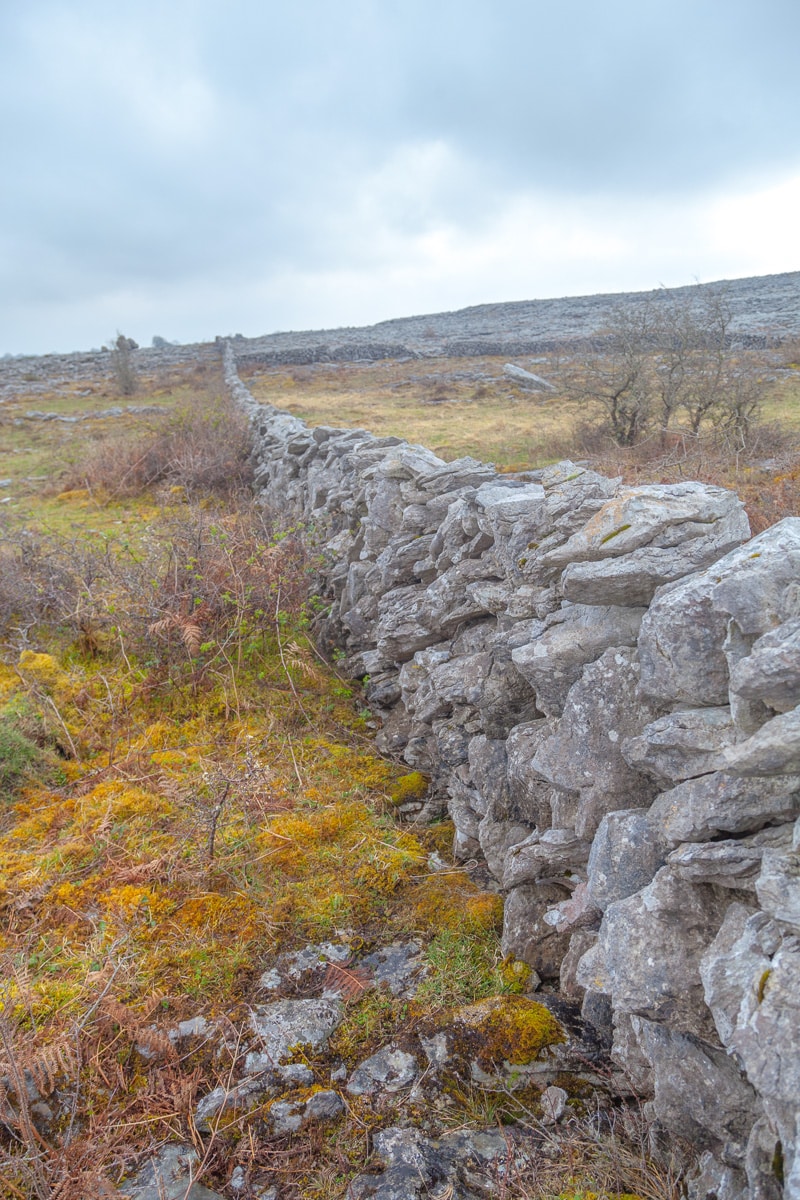 However beginning in 1845, the infamous Potato Famine struck the country. Potato blight, a disease caused by Phytophthora infestans, rots the plants and tubers, and renders them inedible. It destroyed the crops, ruining them and rapidly infected potato crops across the nation. Together with onerous policies and general mistreatment of the Irish by the British government and wealthy landowners the result was mass starvation from famine, and emigration. Though the number of deaths due to the famine and subsequent disease epidemics is uncertain, the number is estimated somewhere around 1,000,000, or 12% of the population.

The other most significant effect of the famine was emigration. Although the famine itself probably resulted in about 1 million deaths, the resultant emigration caused the population to drop by a further 3 million. These emigrants largely ended up in North America, if they survived the cramped and unsanitary conditions on board what became known as  “coffin ships” where disease was rampant. 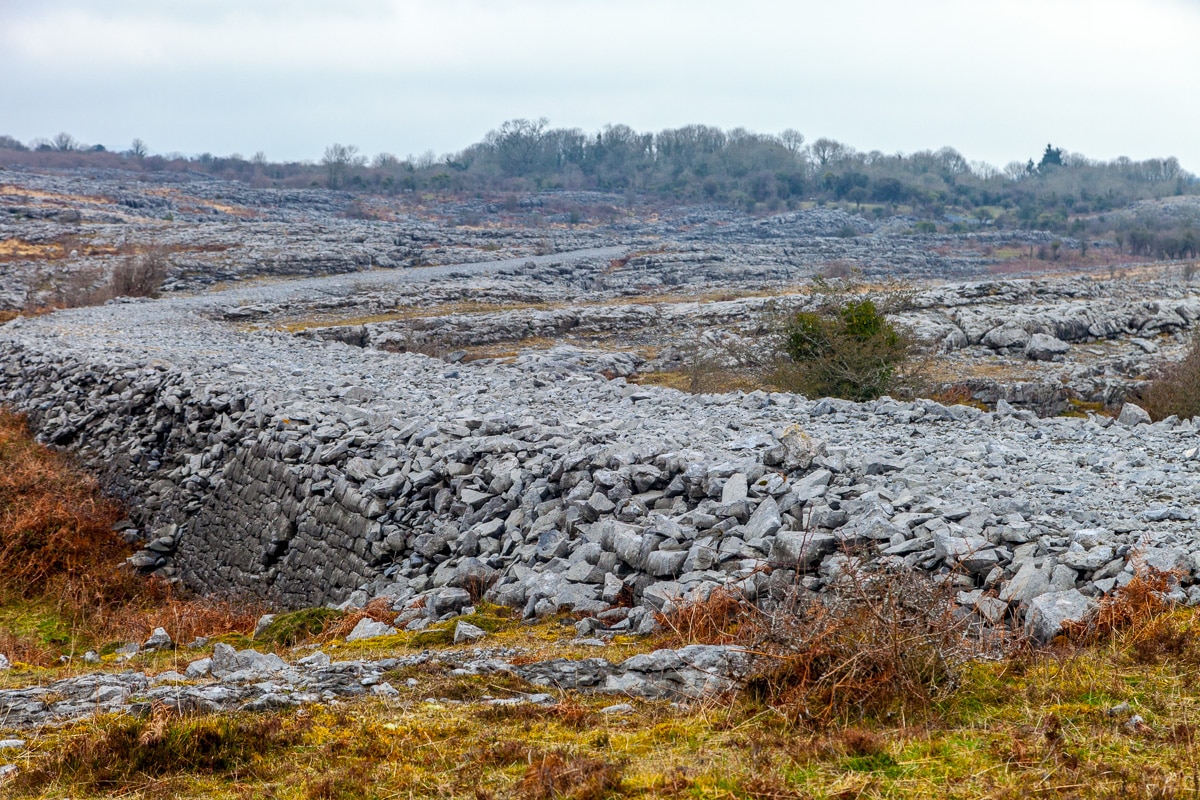 Thus throughout Ireland as well as the Burren are examples of feeble attempts to aid the suffering population. Walls that stretch for long distances and hand-crushed stone roads that go nowhere were built by starving and impoverished men and women for a work scheme run by local churches and landlords who would pay in small amounts of food.

The stone walls and stone roads of Ireland are an extraordinary display of the hardworking perseverance of the Irish people. They are also a reminder to all about the history of this remarkable place in which they were built. 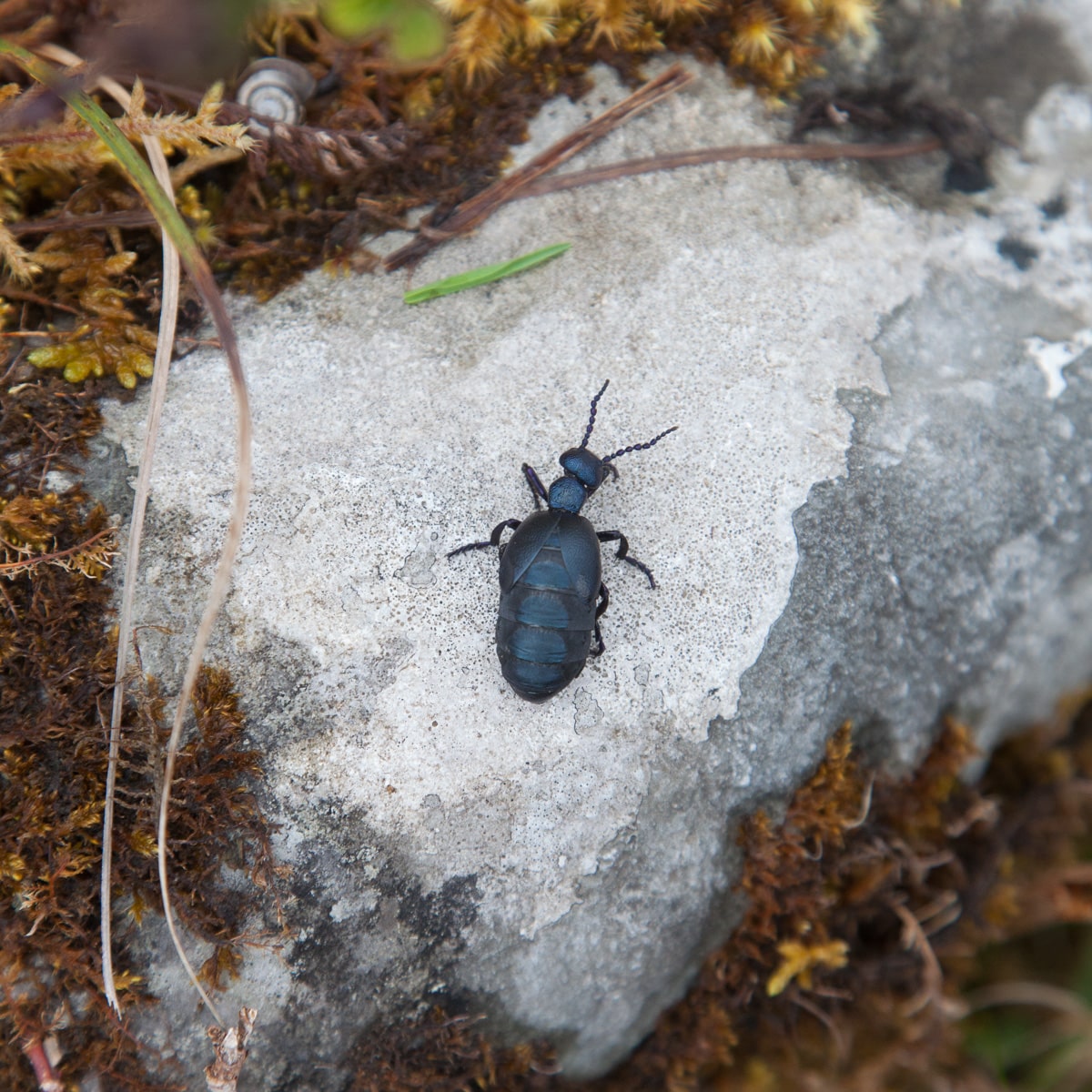 We visited in the early spring, aware that the flowers that cover this remarkable place would not appear for another month or two, however there were several species of flowers that were making early appearances. Most noteworthy were the gentians (Gentiana pneumonanthe) whose bright blue flowers were just beginning to open. Also visible were a couple of small orchids like the Early-purple Orchid (Orchis mascula) as well as numerous other diminutive blossoms, and an unusual Violet Oil Beetle (Meloe violaceus) an interesting species, parasitic on solitary bees, that we certainly would have missed were it not for the aid of our guide, Marie.

A couple of days later, as we were departing western Ireland, we returned to another part of the Burren to hike on a marked nature trail. It was a slightly different terrain filled with small trees and wildflowers.

In all it was a remarkable place, though at first glance it appeared empty and lifeless, yet on closer inspection there teemed an amazing diversity of life. There was also a story of hardship and death; nevertheless, those who survived have found strength and perseverance in their country’s past tragedy.

A great article on the Burren can be found here.