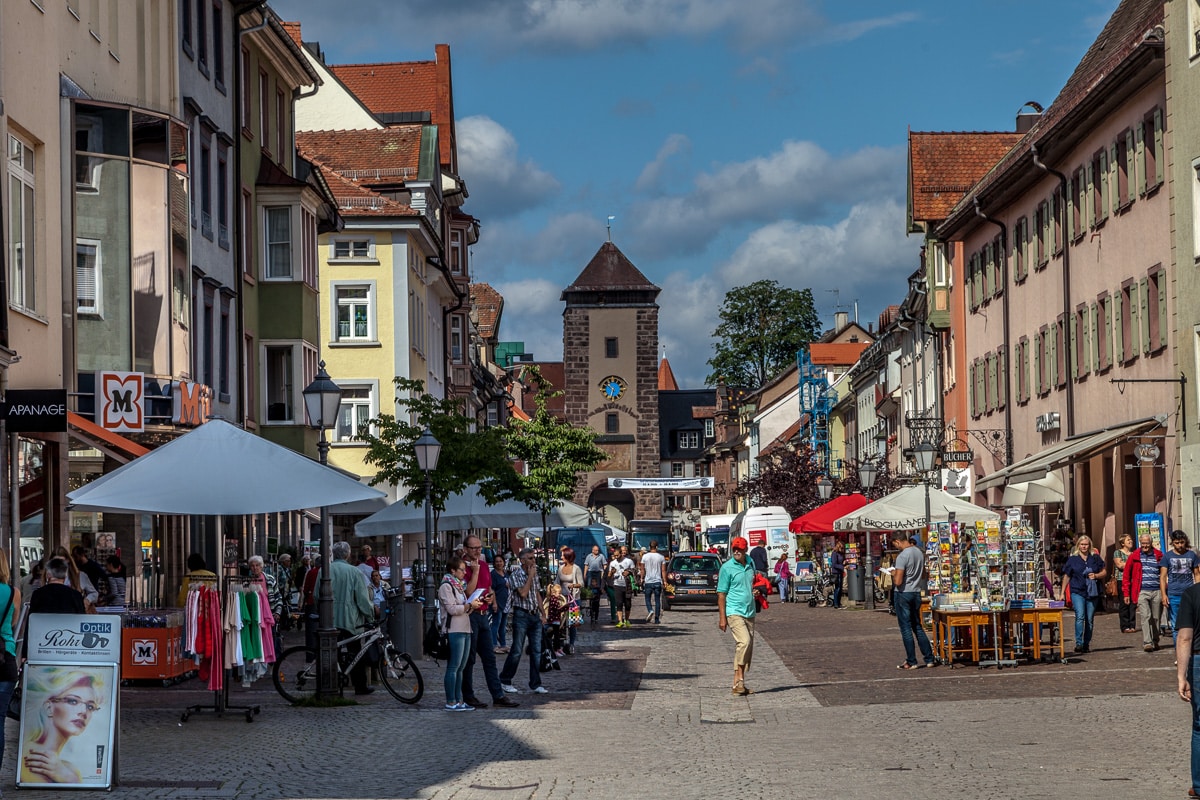 Today we were going deep into the Black Forest. It is home to a very special cake, cuckoo clocks, dense evergreen forests and picturesque villages, and a place that inspired some of the Brothers Grimm fairy tales. We were also excited to be meeting  Karl and Ingrid (relatives of a work colleague), who were going to help show us around. 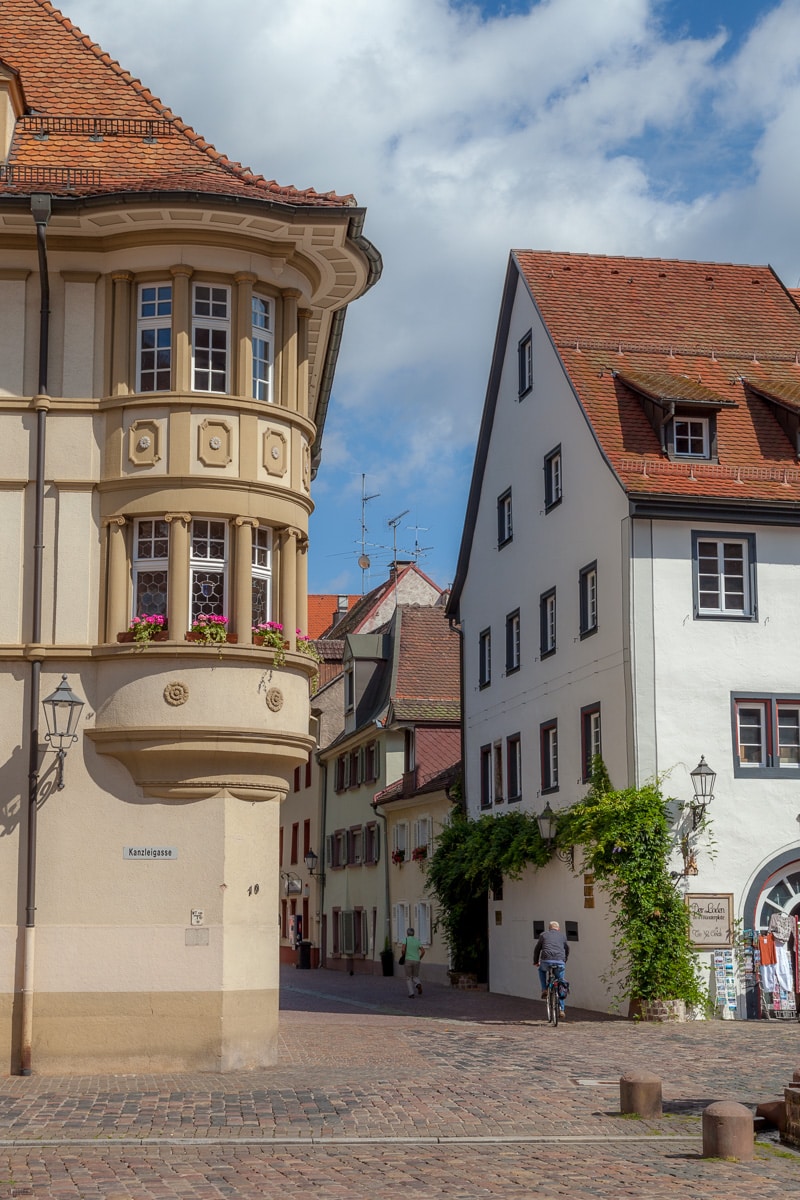 After a good breakfast at our hotel in Gengenbach, we walked to the train station for the scenic journey to Villingen. Our 1-hour “Black Forest Railway” train trip entered the Black Forest Mountains through spectacular scenery, and passed through 37 tunnels and climbed 633 m (2077 ft) on its way to Villingen-Schwenningen.

Karl and Ingrid were waiting for us at the station, and after introductions, we took a walk through their lovely town. We chatted the entire walk, and Karl provided an ongoing dialogue on the sights and history of their town. Working our way to their car, we then drove on beautiful mountain roads through the forest, stopping at a trailhead for us to walk one of the many trails that crisscross the mountains. During the winter, these same trails are used for cross-country skiing.

Karl, Jeannie and I took to the trail while Ingrid drove their car to meet us further along at Kolmenhof a forest restaurant. Though the time on the trail was short, the forest was lush green and beautiful. As I photographed the surroundings, Jeannie and Karl walked along. We hiked across the continental divide between the Atlantic Ocean drainage basin (drained by the Rhine) and the Black Sea drainage basin (drained by the Danube). 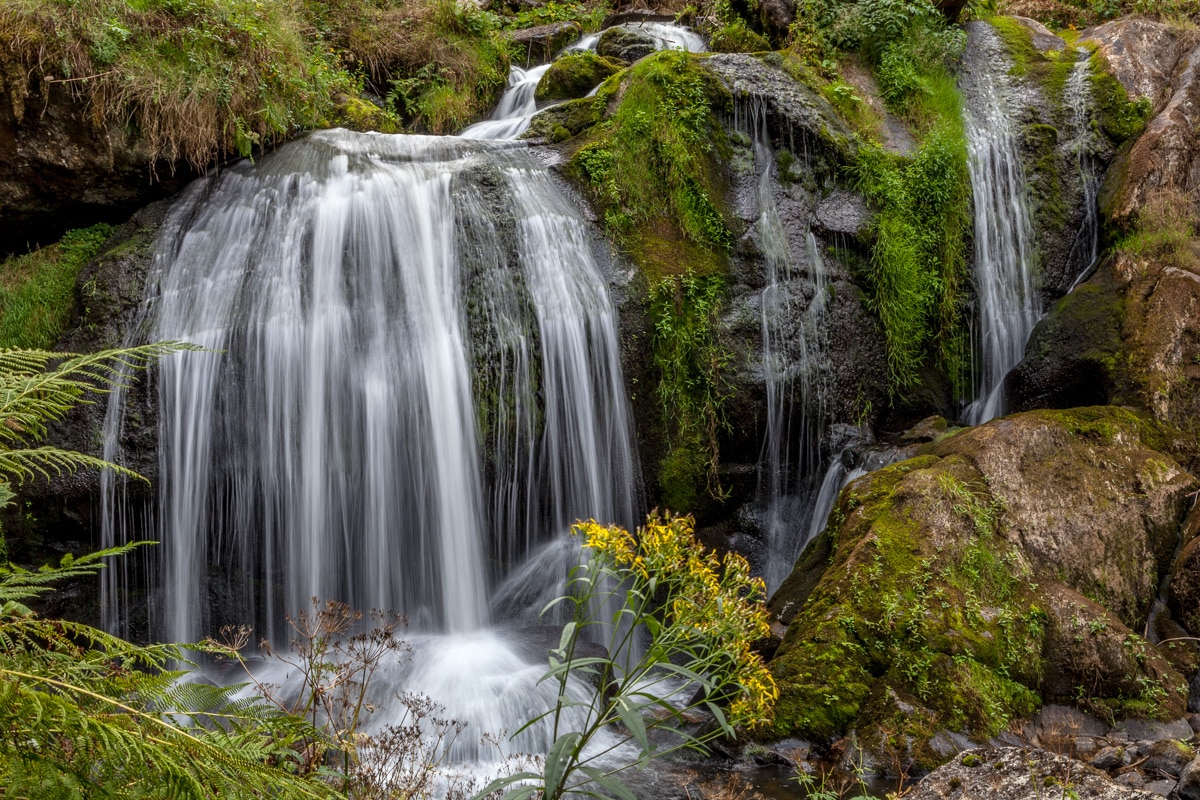 When we arrived at the restaurant, Ingrid was waiting for us. We ate outside in the beautifully cool temperatures. Later we rode again through the forest to Triberg where the Triberger Wasserfälle, Germany’s highest waterfall plunges 163 m (535 ft) over seven cascades.

But more importantly, Triberg is where the Black Forest cake originated! Ingrid inquired where we should find the best Black Forest cake in town and off we went. Indeed, the small cafe was an old family-run establishment that still had a copy of the original recipe on display. And was it good! 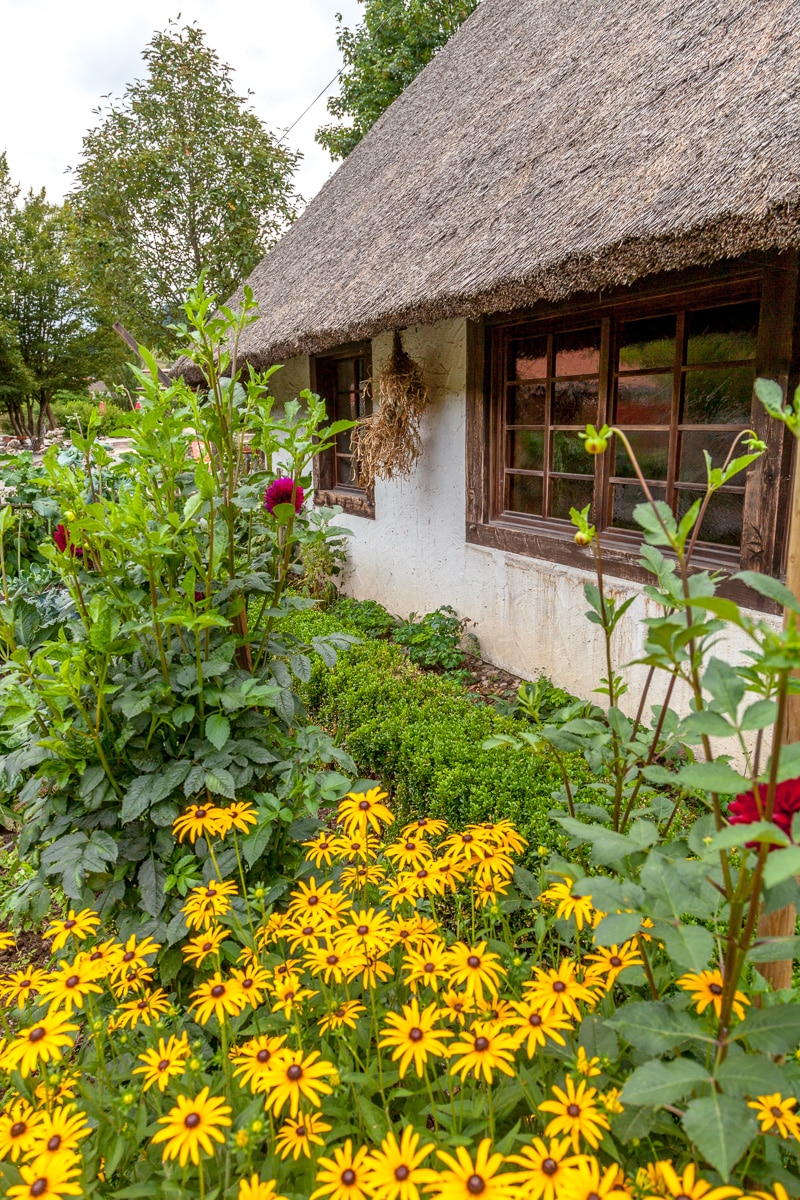 Re-fortified, we then went to see the World’s Largest Cuckoo Clock just down the road. Since we arrived close to the hour, we decided to wait to see the 150 kg (330 lb) cuckoo emerge. Interestingly, the cuckoo clock is an exact duplicate of an original clock enlarged 60:1.

Next, we drove on to see the Schwarzwälder Freilichtmuseum Vogtsbauernhof, an open-air museum in the Black Forest located between Hausach and Gutach. The Black Forest Open-Air Museum Vogtsbauernhof has collected examples of the buildings and houses dating to 1590, dismantled and moved them to this museum, reconstructed each one and filled them with period furnishings and equipment. Amazingly, these wooden structures have survived up to 300 years. We wandered through the ancient buildings admiring the tenacity and strength of the peoples that lived in such a demanding environment.

As the sun began to drop behind the mountains, it was time to go. And even though we could have wandered here longer, Karl and Ingrid had graciously offered to return us to Gengenbach and then would have to drive home in the dwindling light. So they dropped us off at our hotel with many good memories of a full day, great places and food, and new friends. 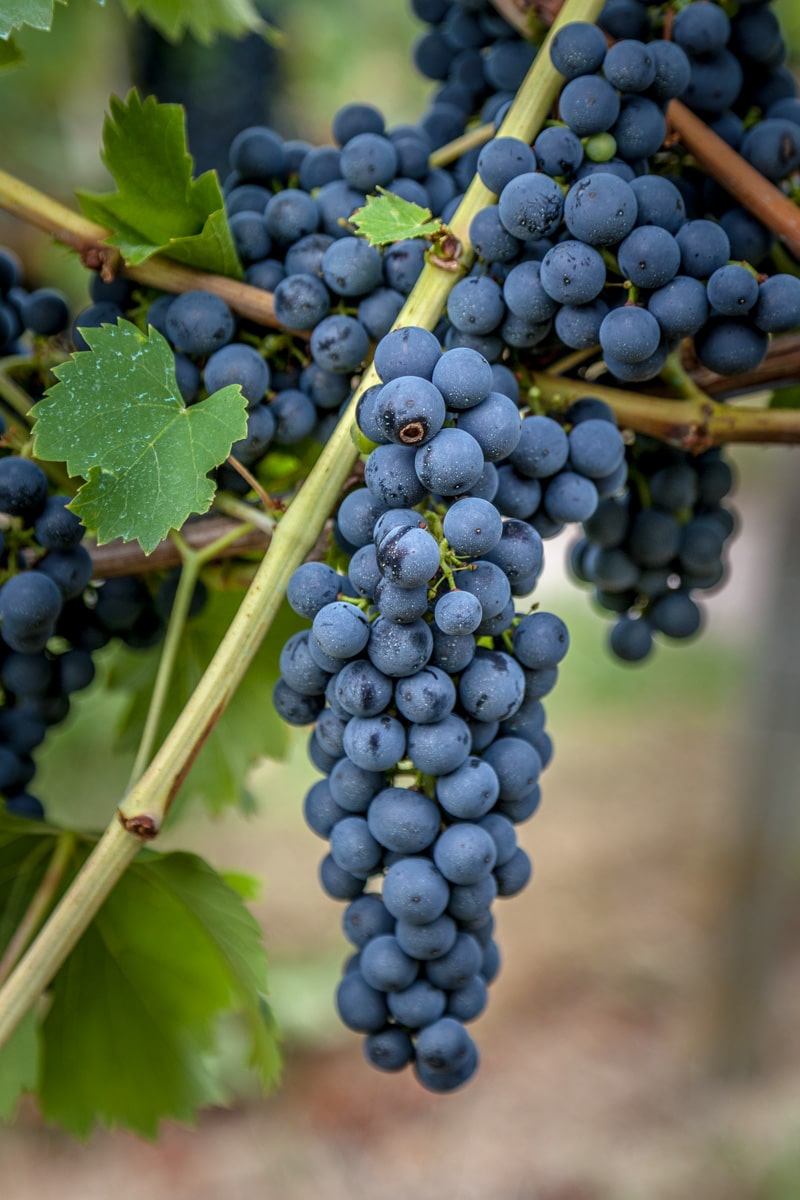 After a quick clean-up at the hotel, we found a light dinner followed by a good night’s sleep.

The next day, after breakfast, we took off on a delightful, much longer walk through vineyards and forests. We followed the contours of the big hills through vinyards, massive stands of fir and spruce trees, past dairy farms with their contented cows, and along old farm roads. We were impressed by the numerous wood piles – firewood we presumed, since this area can have very brutal winters.

As we rounded one bend in the road, we even encountered a “schnapps station” in woods! It was a small box-like structure open on one side, at arm level with seven bottles of different flavors of schnapps ranging from 26-42% alcohol by volume. 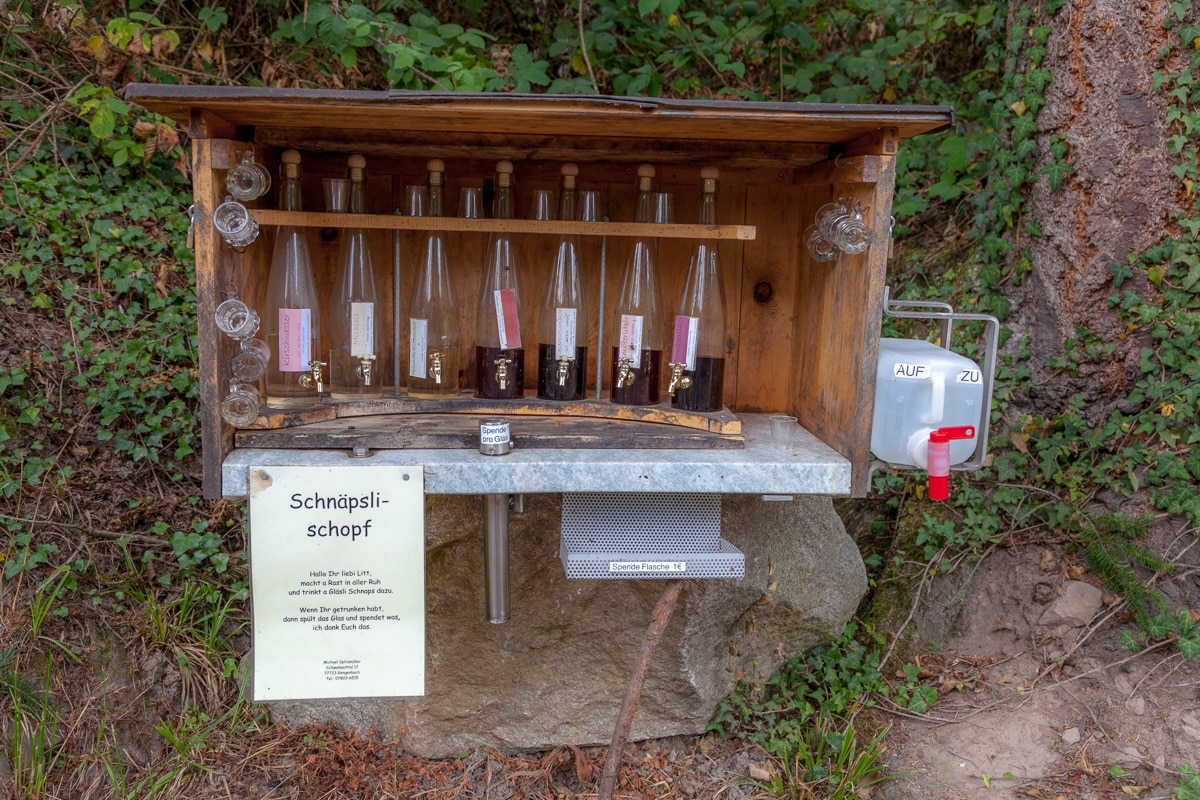 Each bottle had a small golden tap at the bottom, and there were small shot-sized glasses for taking a drink. The instructions asked that besides leaving 1€ for each drink, that you also wash out your cup with the water provided. Brilliant!

Invigorated, we walked on, stopping for a little picnic, for photographs, and smelling the flowers. Eventually we returned to Gengenbach, where we waited for the train to take us back to Strasbourg. It had been such a delightful three days with so many new experiences in such a beautiful place, but best of all we found two new friends who treated us to a wonderful day in the Black Forest.