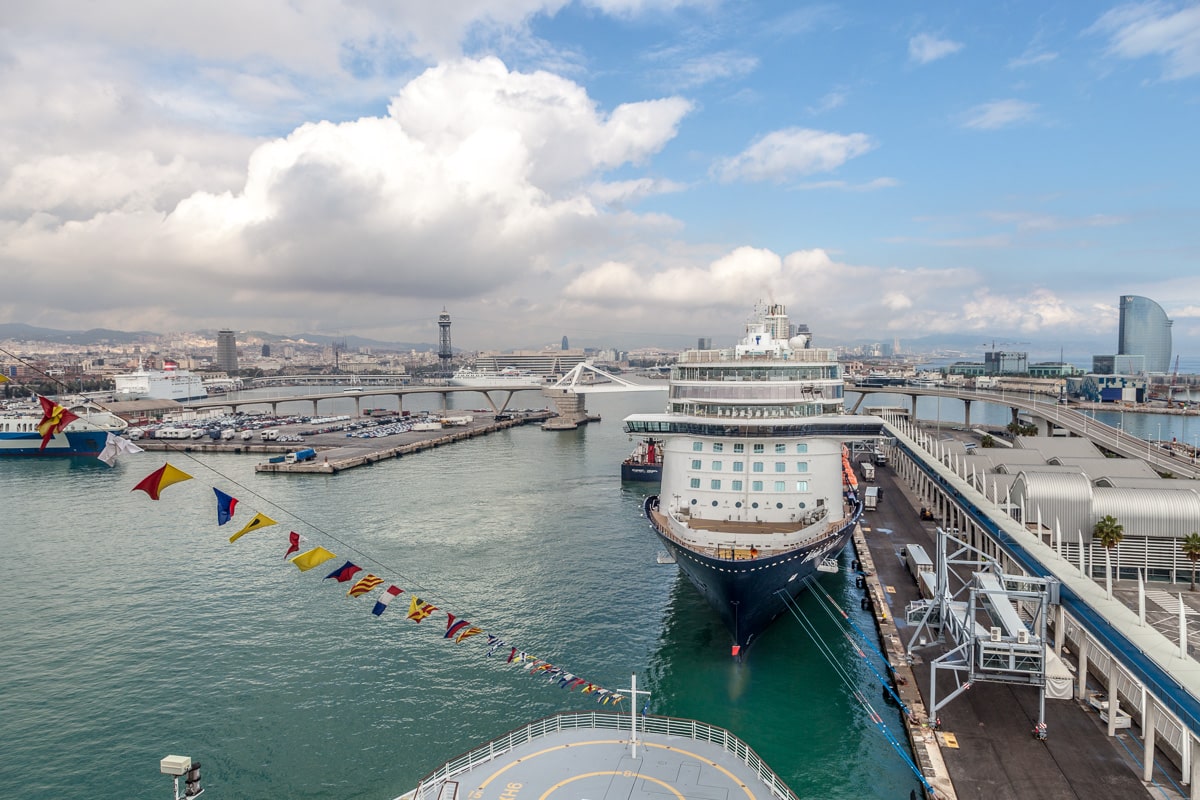 Our taxi deposited us at the terminal right at 11:30 a.m. It was busy with people pouring from cars and taxis, and porters loading luggage onto carts. The line moved fairly quickly as we began our slow walk toward the check-in counter. Within our first hour after departing the taxi we were boarding the Equinox. The rooms would not be ready for another hour so we located a place to park our bags.

Once the rooms were ready, we located ours, unpacked, put items in the safe and took off to explore the ship. After wandering multiple decks, we found a couple of chairs to sit and acclimate. It was a quite different lifestyle than we were accustomed to. Kind of like a luxury hotel with electro-pop music everywhere. After some time sitting and soaking it all in, we looked at each other and wondered – thirteen days in this environment?

Later we wandered back to the room, finished unpacking and prepared for dinner. Later, sharing a table with a mother and her grown daughter, and a couple from New York, there was much conversation. Everyone else at our table were repeat cruisers. And, of course, we shared the story of our adventure. 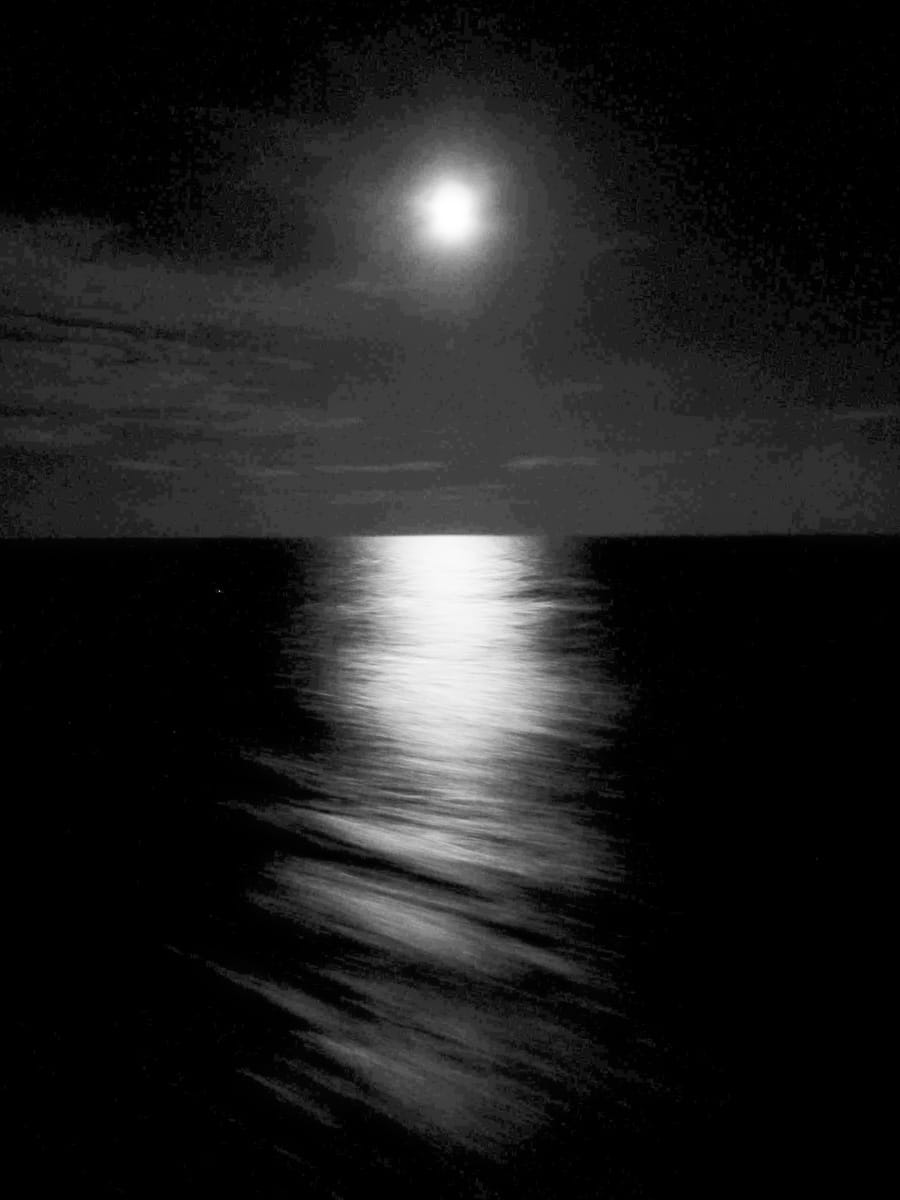 The moon rose over the Mediterranean while we were at dinner. Its reflection in the sea shone like crystals on the surface of the lightly rippled water. The only noises were the sounds of the waves created by the movement of the ship through the water, and the wind.
Out on the deck overlooking the sea, few sounds of the ship slipped out. The engines, many decks below, were just a low almost unnoticeable drone.

Occasionally, someone would open the door to come out and the noise and music of the interior would escape to disturb the peace of the moonlit night. The sounds of entertainment constantly fill the public areas of the ship, and escaping the surplus of pop music becomes a challenge.

The movements of the ship were faintly gentle, like lying in a hammock when a soft breeze comes by. Of course we hadn’t entered the Atlantic Ocean yet.

The ship was massive, at over 1000 ft. in length and a 121 foot beam. With a capacity of 2850 passengers and 1500 crew, it was a floating city. Restaurants, bars, entertainment venues and shopping easily reached by stairs or via the dozen or more elevators that connected the 16 decks available to passengers. 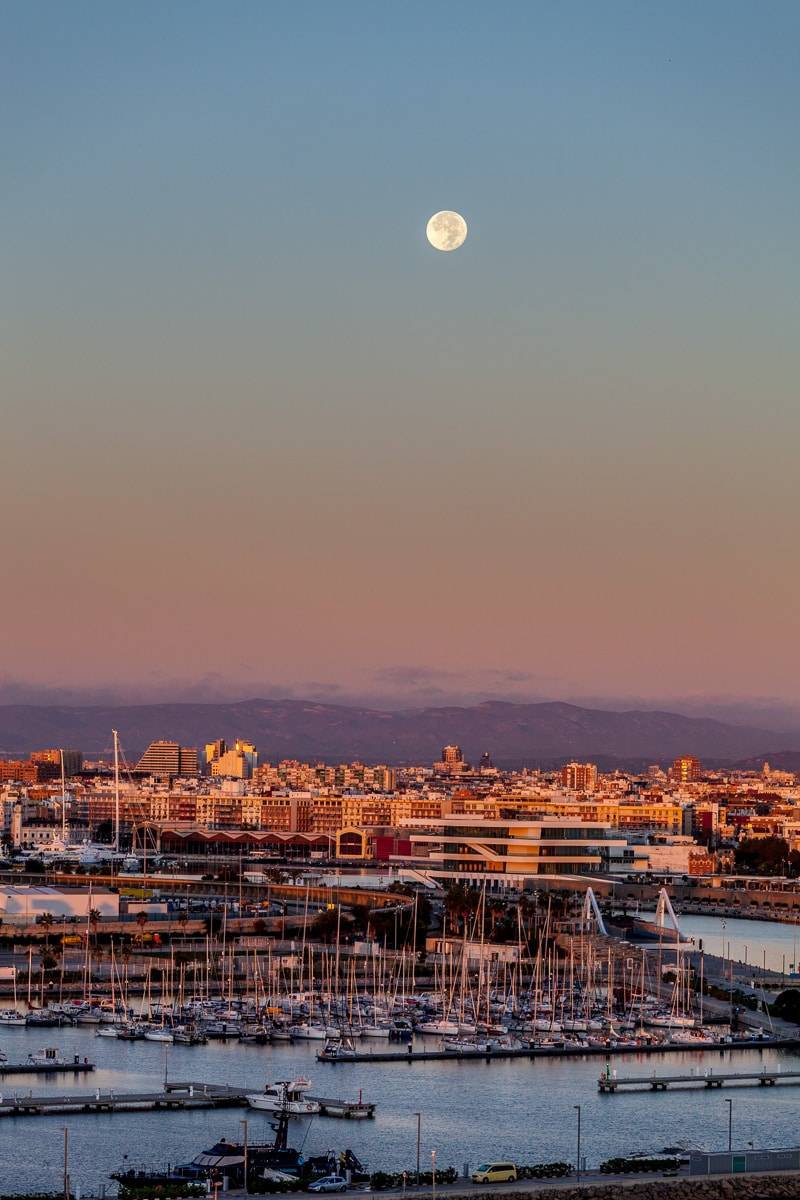 Our first port of call was Valencia. We stayed on board so that we could become acquainted with the ship and enjoy the space with fewer people. Later in the morning, the need to stretch our legs took us to the deck with the jogging/walking track and walked in circles for 3 miles (8 laps around the deck = 1 mile). We added variety by climbing the stairs to the next level and back down. Hmmm, 12 more days of this?

The next day we made port in Malaga and went on an excursion to the Alhambra, the incredible Moorish castle in Granada in the foothills of the Sierra Nevada. It was a 2-hour bus ride from Malaga. The Alhambra’s Islamic palaces, as they are today, were built for the last Muslim emirs who ruled this part of Spain in the 13th and 14th centuries. 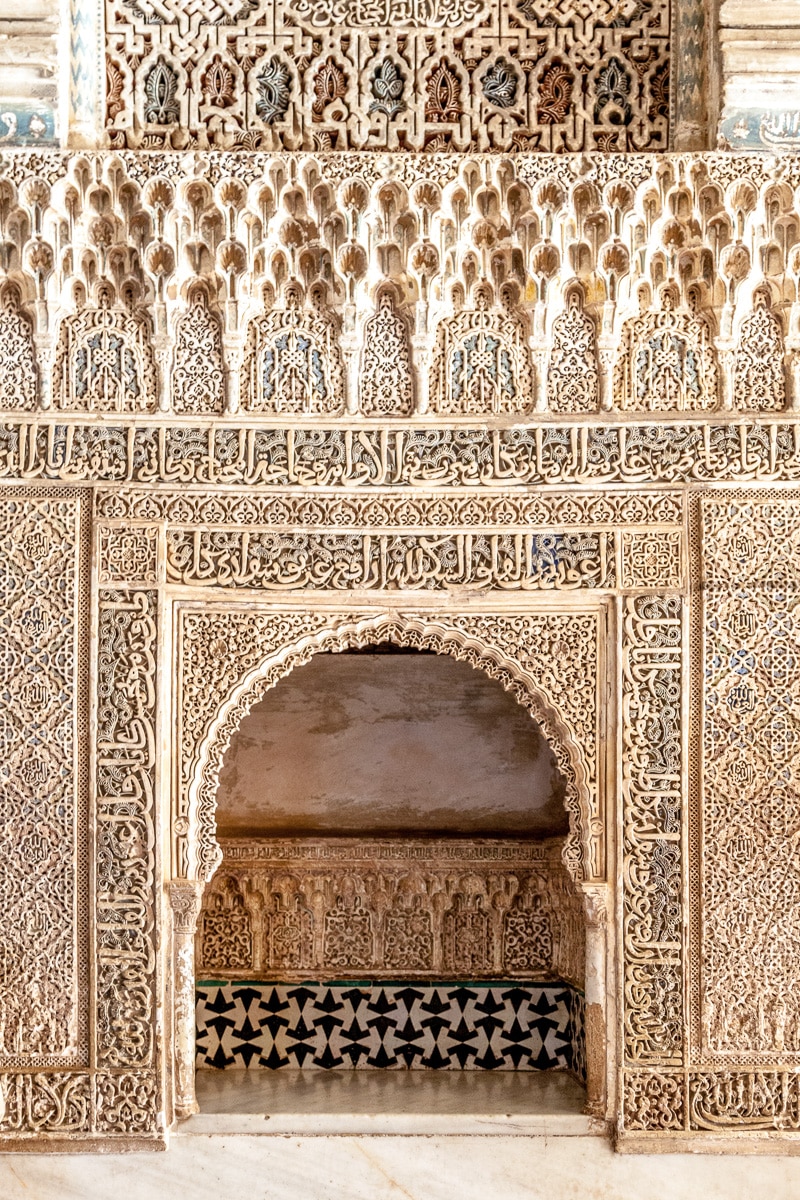 A varied assemblage of Moorish architecture, the Alhambra captivates the imagination with the combination of arcades, fountains, and light-reflecting water basins found in the courtyards.

The ship departed Malaga, again as we were having dinner. Earlier in the evening there had been an announcement that we would pass the Rock of Gibraltar later in the evening, and then through the Straits of Gibraltar shortly thereafter. Once passing the straits, we would enter the Atlantic. Unfortunately we would be doing this in the dark, and in spite of a full moon there might not be much see.

Indeed, only the city lights of the town around the massive rock were visible, but it was fascinating to know that the land to starboard was Europe, and a mere seven miles away was Africa, and the lights of the city of Tangier, Morocco.

Waking up during the night, the motion of the ship had changed. Though still gentle, it was more pronounced. We had entered the Atlantic, and I let the movement rock me back to sleep. 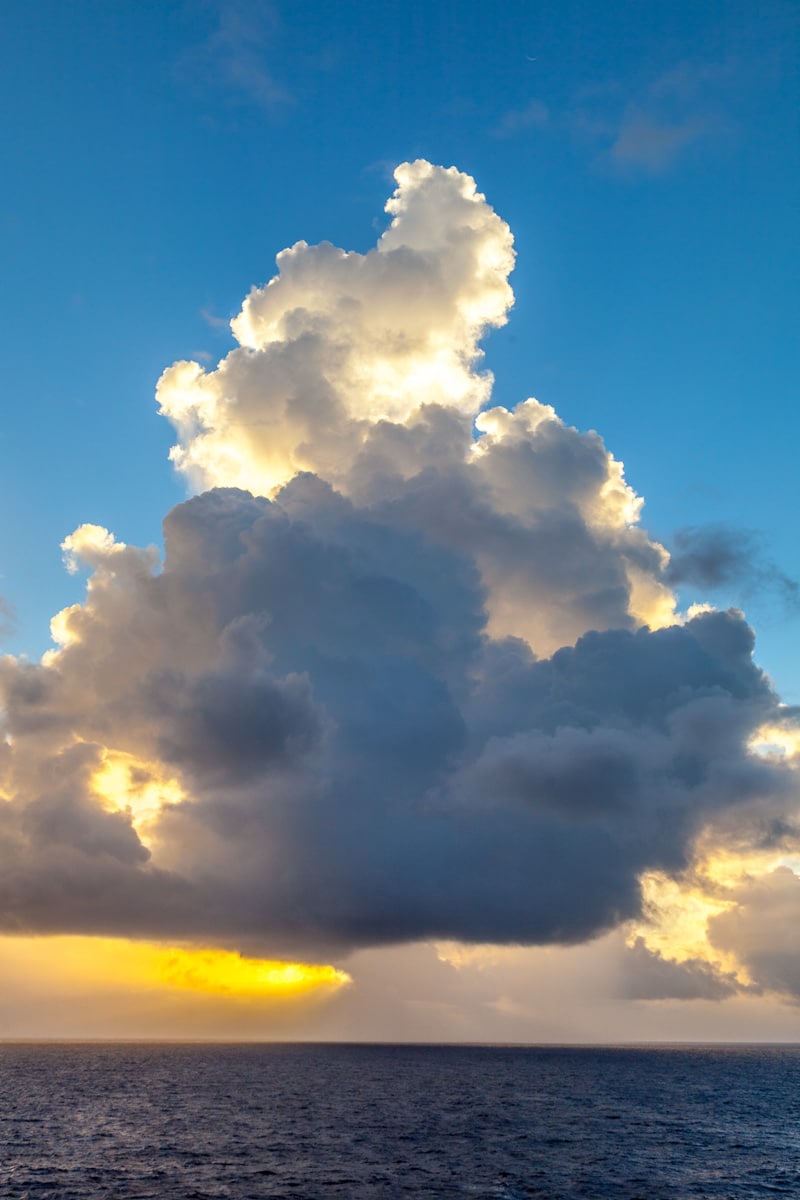 As sunrise slipped into the stateroom through a gap in the curtains, the movement of the ship due to the ocean swells caused the little beam of light to move slowly about the cabin making it difficult to return to sleep. The rippled surface of the ocean glistened with sunlight, and a chilly wind slid over the ship as easily as the swells traveled beneath us. The few clouds that hung over the horizon made a place for the colors of the early morning light to illuminate.

This would be our first full sea day in route to the Canary Islands, where we would visit the islands of Lanzarote and Tenerife. We walked about each of the towns near the ports during our brief stops. 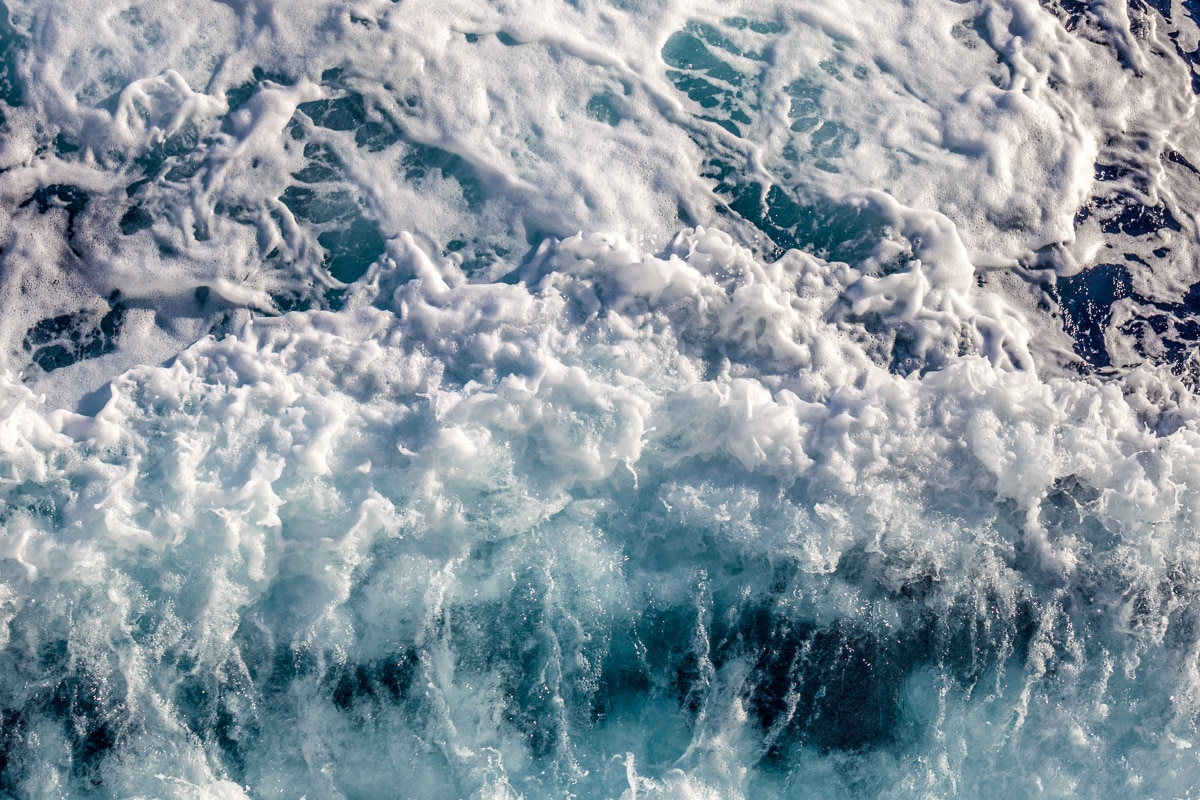 Departing the Canary Islands we entered the open Atlantic where the color of the open Atlantic is an incredible deep blue, a true “navy blue” as it were. There are puffy clouds in the distance all around us to the horizon, yet directly above us it is clear blue sky.
We synchronized well with life on the open seas well. Eating, drinking, exercising, and meeting new and interesting people was the order of every day. Although the entertainment was not our style, it received high praise from many of our fellow passengers. 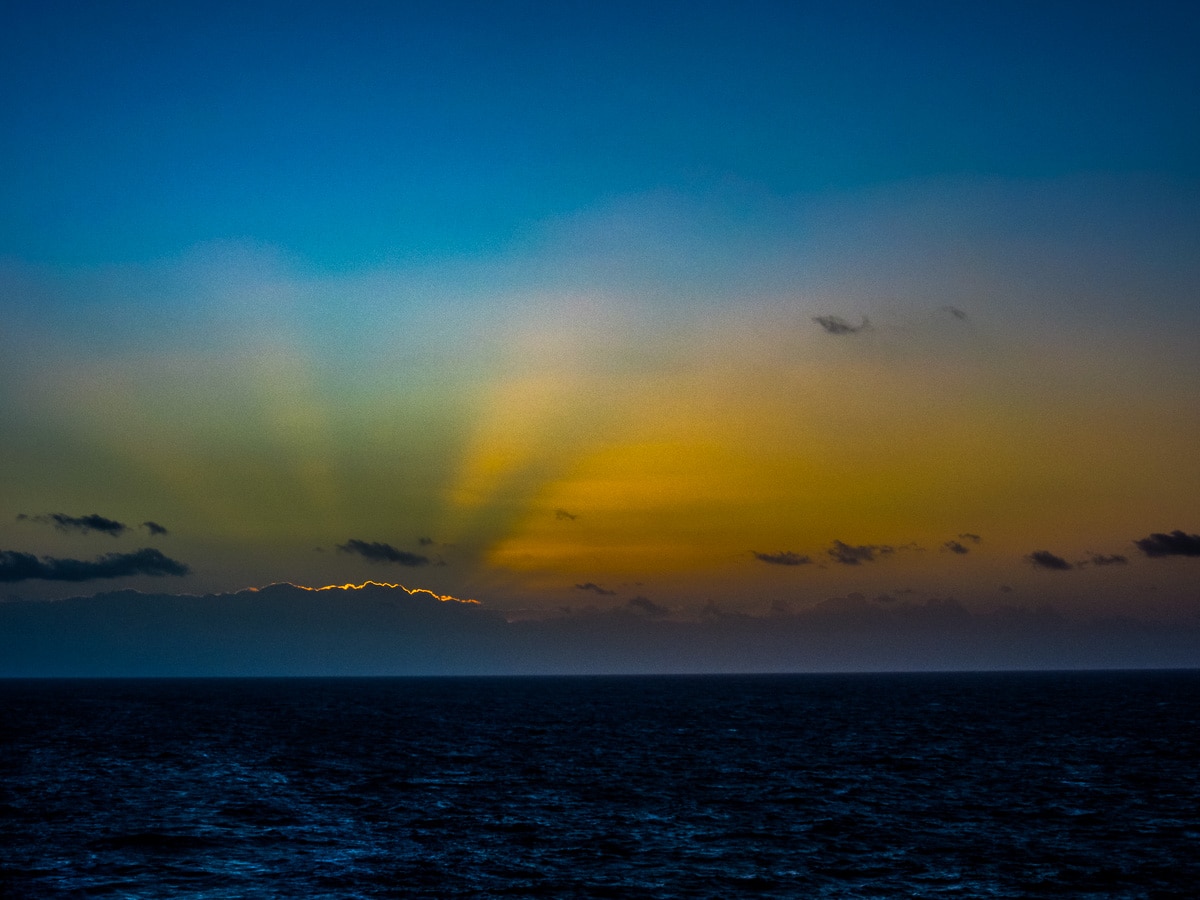 In all, the crossing was very pleasant. Seven days of an amazingly infinite variety of sameness. The seas were gentle and the weather beautiful, and though the temperatures were cool when we began, it became warm to almost hot as we made our way across the ocean.
On the last morning aboard ship we awoke having already docked in Fort Lauderdale. We had already packed, having set our luggage out for collection the night before. We went to the dining room for breakfast to wait for the call for our disembarkation. Everything went swiftly and smoothly, and shortly after we were in our rental car on the road back to central Florida to begin the next chapter of our adventure.

Click here for enhanced viewing instructions for images below