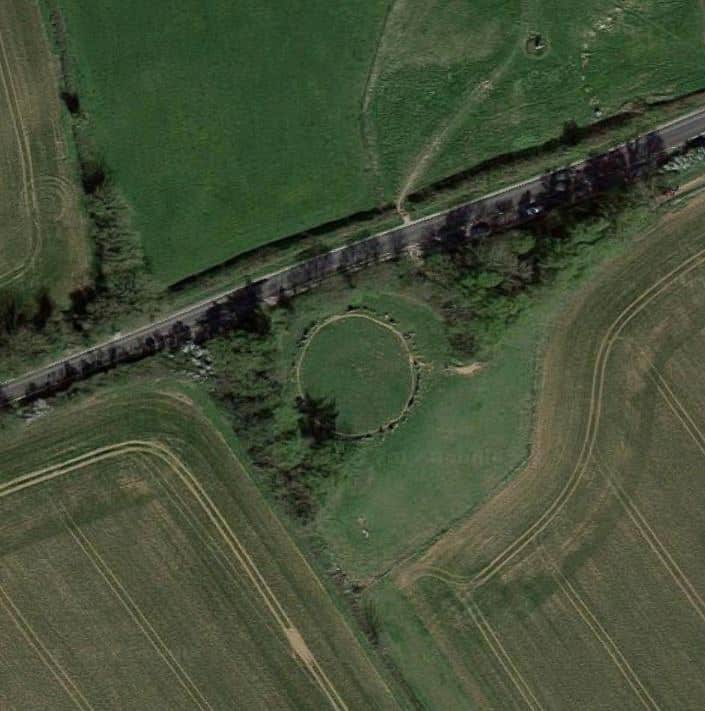 Prior to this visit to England, the only thing we knew of the Rollright Stones was that it was the name of a song by the rock group Traffic on their 1973 album Shoot Out at the Fantasy Factory.

However, the true Rollright Stones, that were the subject of the song, were located about an hour drive NNE of our apartment, in the middle of the countryside near the village of Long Compton. There were no shops, food stores or much of anything else around, and parking was limited to a lay by next to the country road.

The legend says that all the stones at this site were once real people. A king and his army were met by a witch who owned the land over which the group marched, and when the king couldn’t perform a task demanded by the witch, she turned him, his men, and his knights into stone. 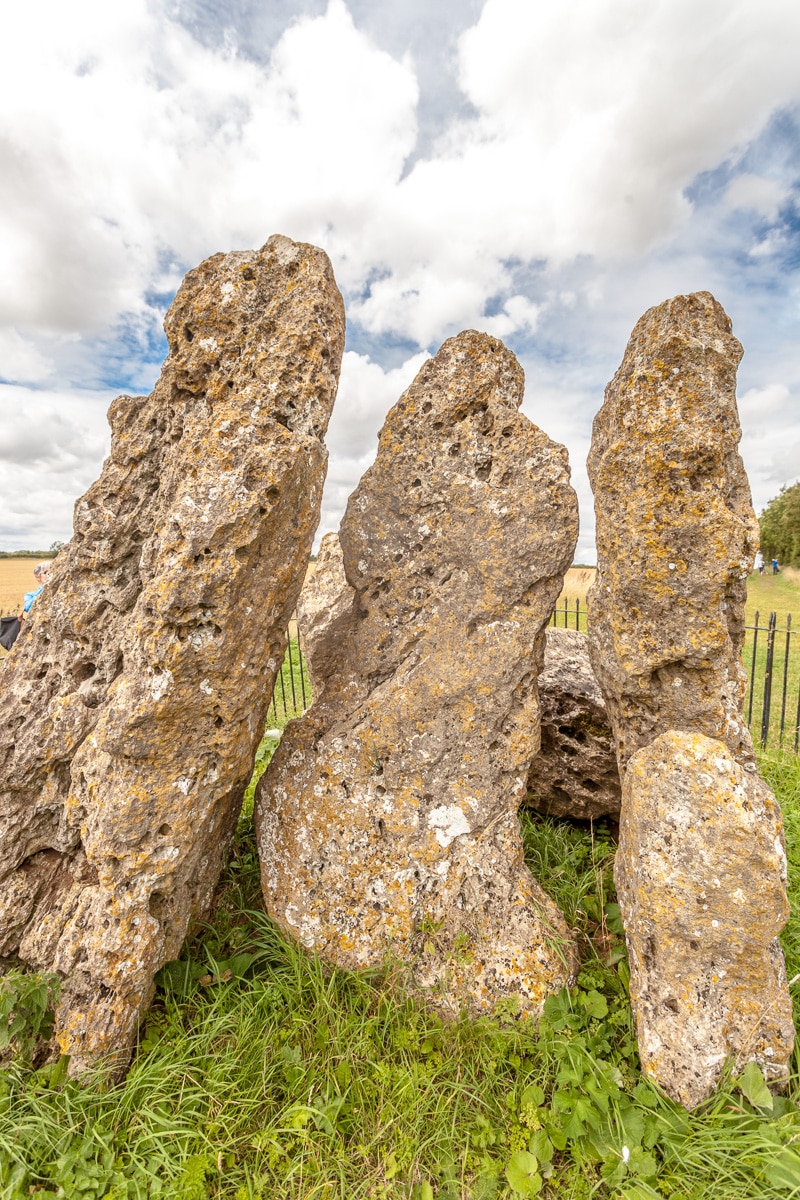 The complex consists of three megalithic monuments all created from local oolitic limestone. Each of the monuments is distinctive in its design and purpose, and each was built at a different period in prehistory. The King Stone, a single standing stone, is the youngest from the early to middle Bronze Age, circa 1,500 BCE; the King’s Men stone circle, composed of more than 70 stones, is late Neolithic, circa 2,500 BCE; and the Whispering Knights, a dolmen (a single-chamber megalithic tomb, usually consisting of two or more vertical megaliths supporting a large flat horizontal capstone), is the oldest monument from the early Neolithic, circa 3,800-3,500 BCE. The length of time during which the three monuments were erected reflects a continuous sacred importance of the site, from the 4th to the 2nd millennium BCE. 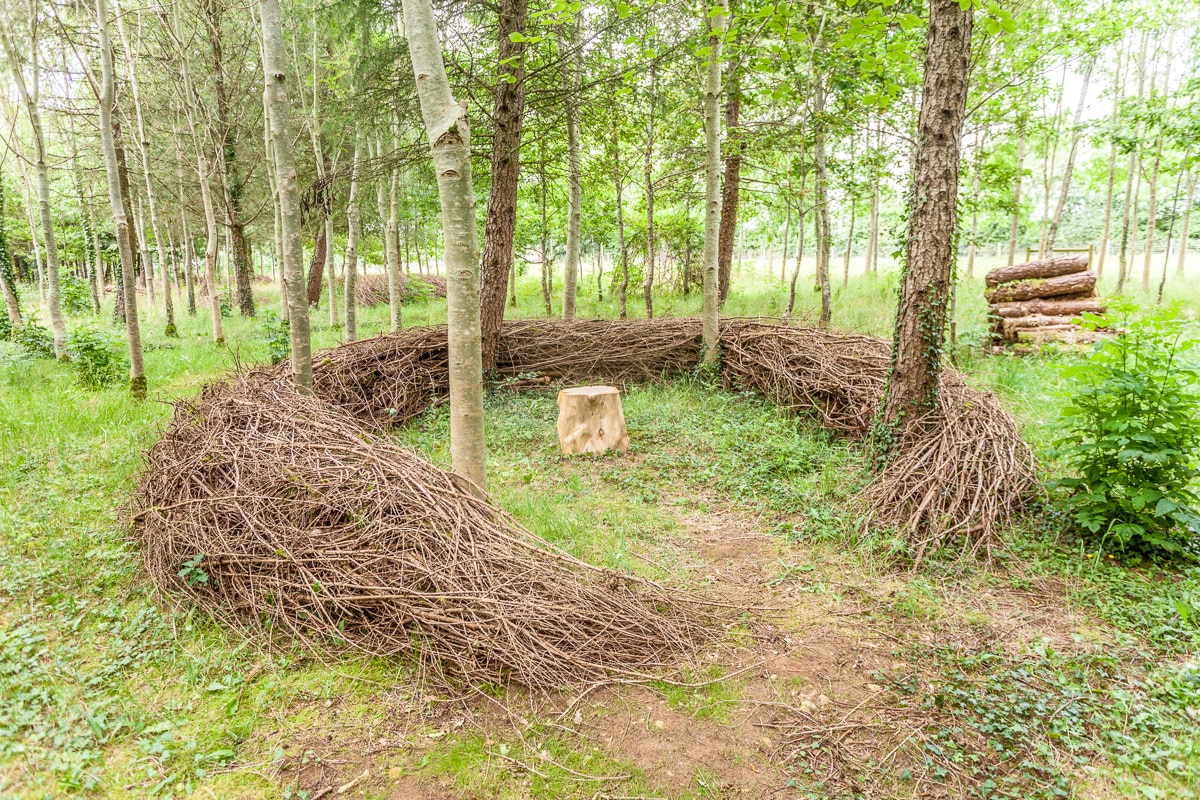 After admiring the last of the stone monuments, the Whispering Knights, we wandered a short distance into a nearby wood where we had noticed a simple, small sign – “Neolithic Echoes”. 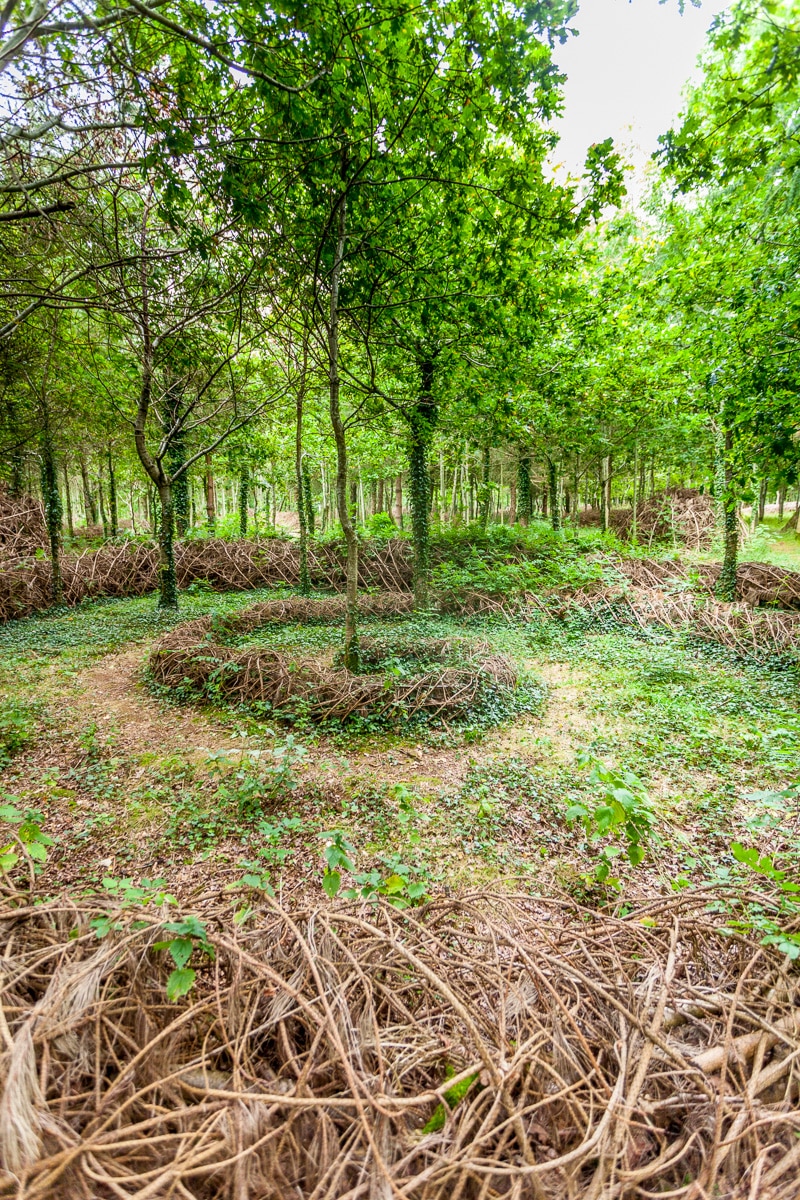 The owners had planted some ten acres of woodland as part of a Forestry Commission program to support tree planting of mixed native English trees. During the process of annual pruning over more than a dozen years, the owners have woven the branches and limbs into delightful habitats and cover for birds and other wildlife, while at the same time creating myriad aesthetically pleasing structures.

What had first appeared to be random brush piles we soon discovered was the were marvelously interwoven ephemeral structures. Some resembled giant larvae, others were dragon-like, while others were mounds and balls, arches and huts.

We wandered through the gallery of logs, sticks, and twigs for nearly an hour admiring the sculptures. More than once we were also reminded of the works of Andy Goldsworthy, another British environmental artist whose works we admire. 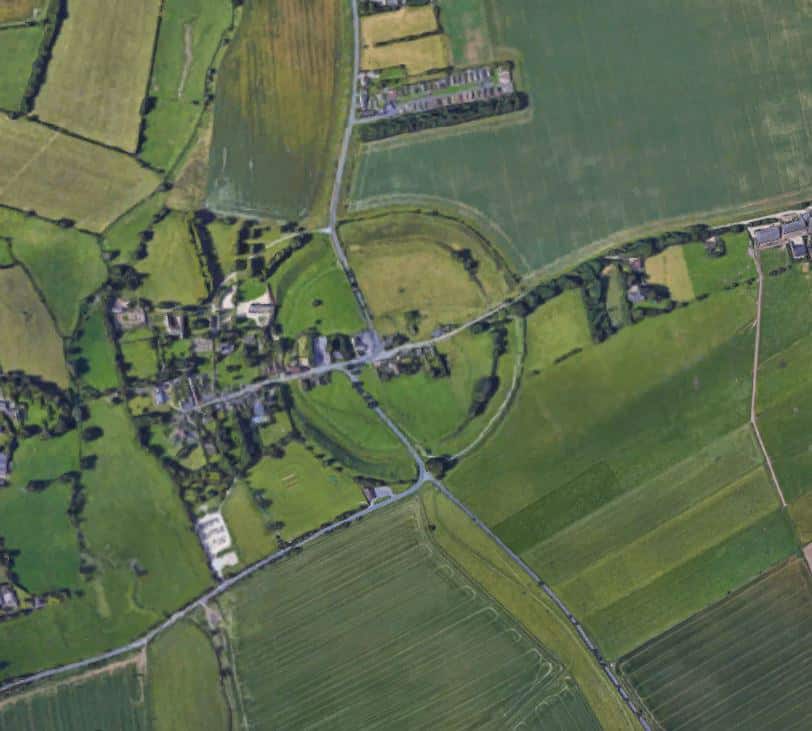 About 32 years ago on our first trip to England, we visited Stonehenge, perhaps the world’s most famous prehistoric monument.  However, it was not possible to walk amongst the stones much less touch them as it had been closed off several years before. It was, even then, very crowded with tourists. Disappointed, we didn’t stay long.

Though Stonehenge was within a day’s drive, we felt that it would be even more crowded now. Instead, we wanted to travel about an hour to the South-East to view the standing stones of Avebury that form the world’s largest megalithic stone circle. It’s bigger and older than Stonehenge and a large section of the village is actually within the stone circle. 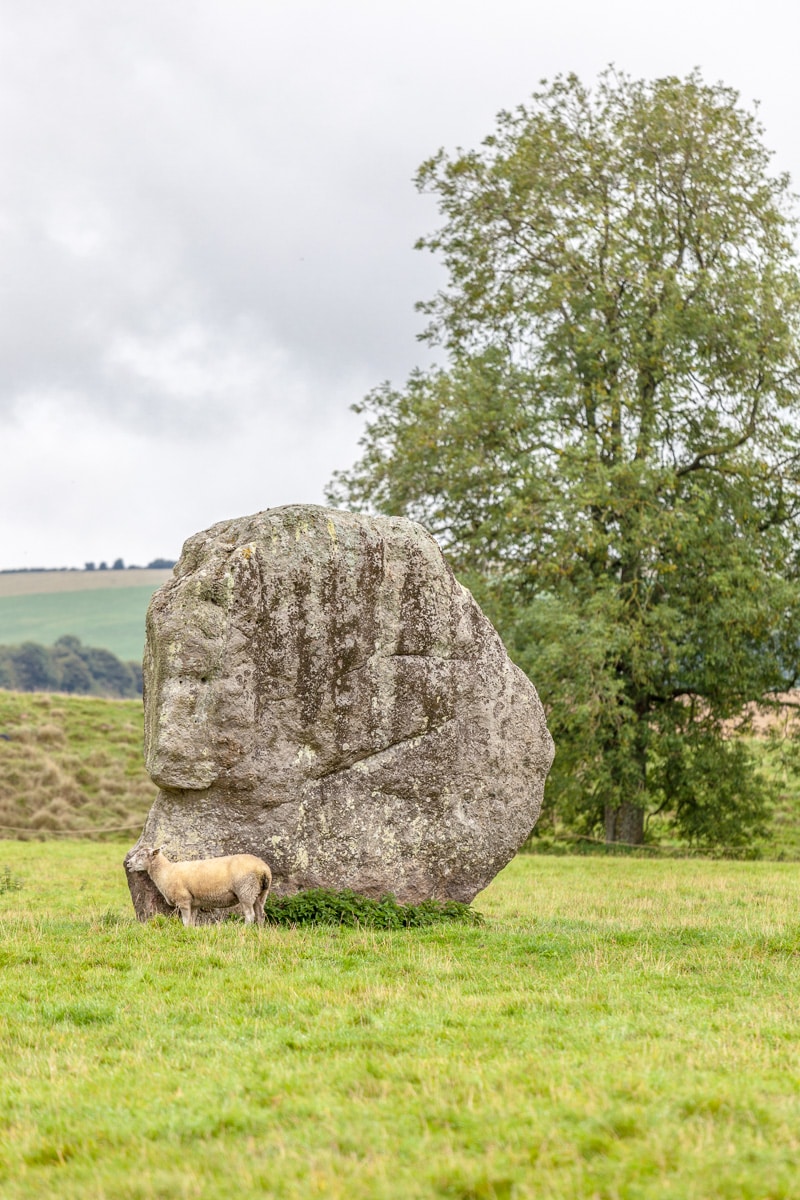 It is believed that the first stones were placed at Avebury around 2600 BCE. The site originally consisted of a 348m (1140 ft) diameter outer circle of 98 standing stones of up to 6m (20 ft) in length, many weighing more than 20 tons. The stones are surrounded by a 5m-high (16 ft) earthen bank and a ditch up to 9m (30 ft) deep. Inside the main ring are smaller circles composed of 27 and 29 stones.

Making our way in and around the main ring, we noticed a couple of large stones across the street. As we passed by those we saw a long double row of stones leading away from the henge. This avenue of standing stones originally had around 100 pairs and was built around 2200 BCE. It originally stretched for over a mile and is believed that it was a processional route linking the stone circle to other distant monuments. 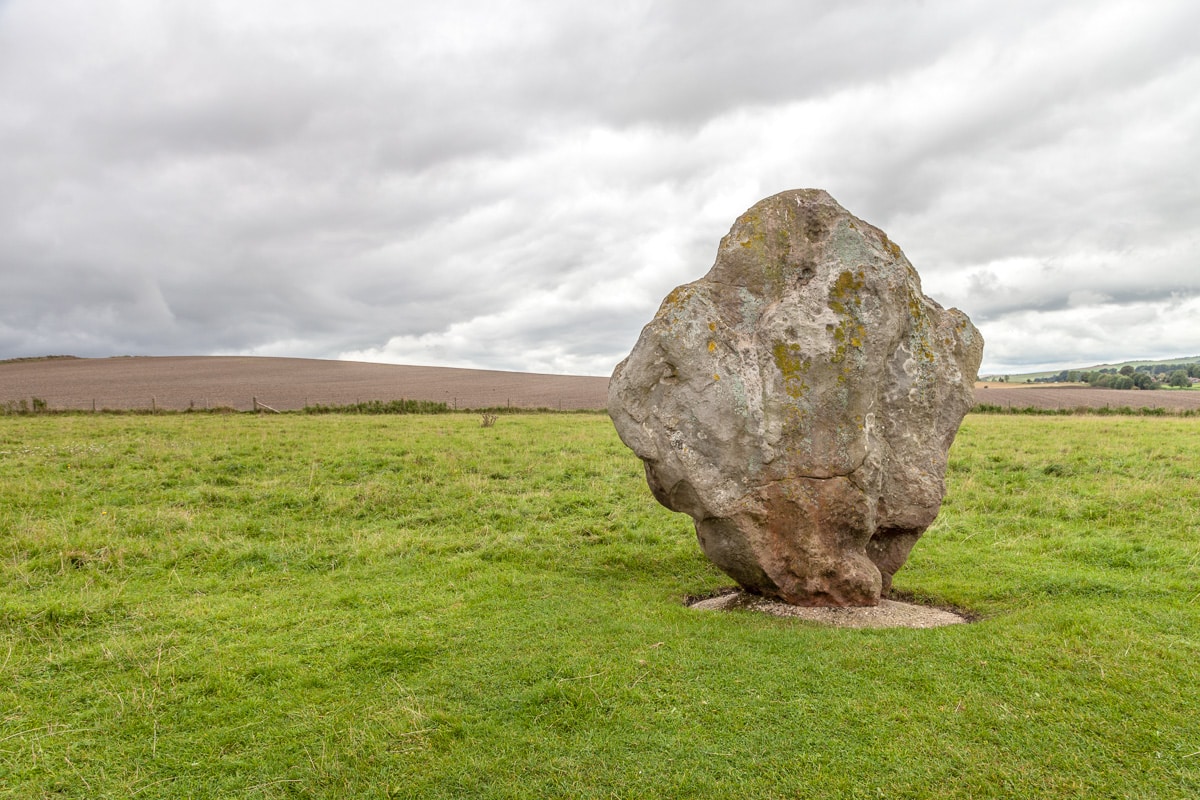 Curiously, the small village of Avebury lies partly within the large ring testifying to its size, and a main road bisects the circle as well. Sheep often graze among the stones giving a sense of what this site has likely looked like for hundreds of years.

The genius loci or spirit of place of each of these locations, ancient and modern, was pervasive. It was not so much spiritual or mystic, but rather a sense of the human spirit – intellect, emotion, fear, passion, and creativity.