This is another of the out-of-sequence posts that I have to share now and again, but it is a story that bears telling. 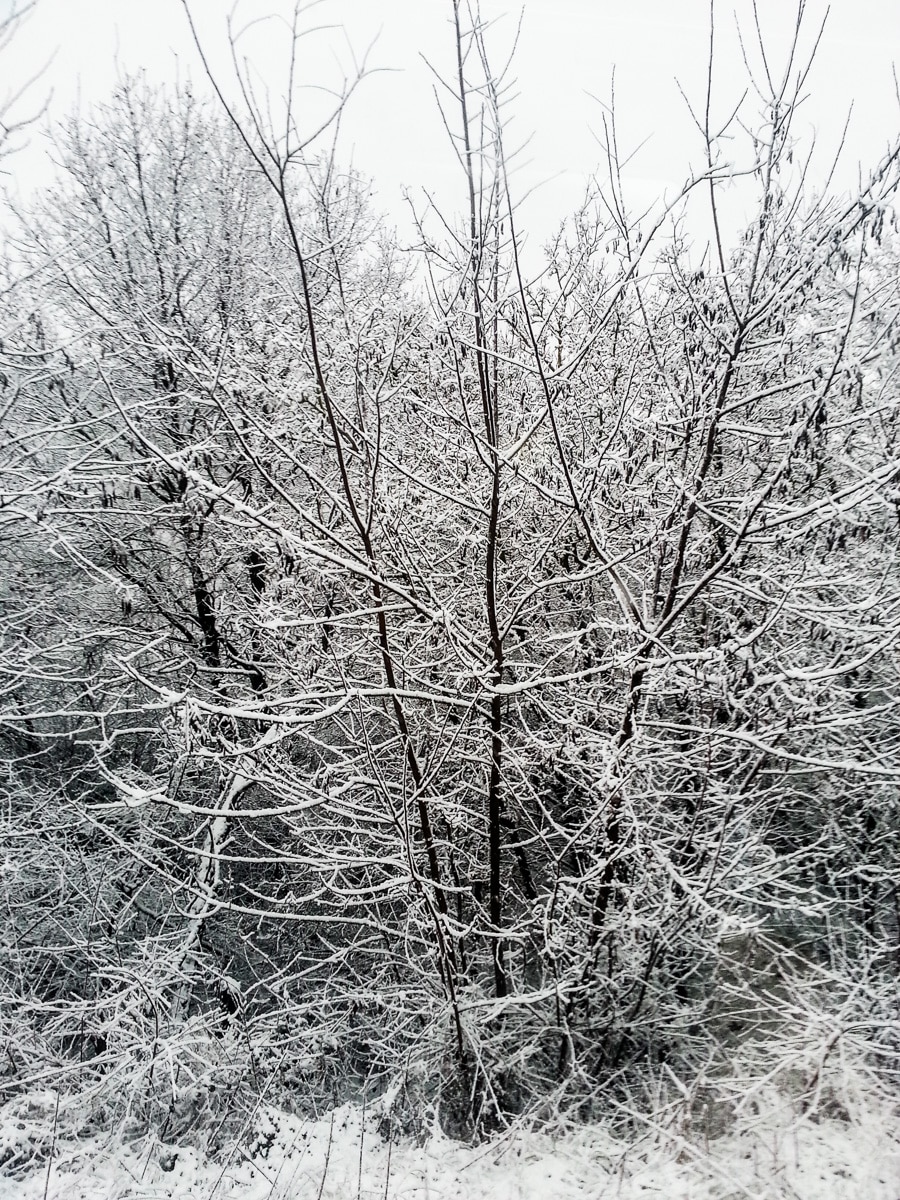 Once in Florence we changed trains to return to Camucia and the Agriturismo il Borgo to say goodbye to Rodolfo and his wife, get our car and drive back to Montignano.

The high-speed train from Venice to Florence moved quickly at 250 km/h (155mph) and we arrived in Florence and made the change to the slower regional train to Camucia/Cortona. The weather was a bit cloudy as we pulled out of Florence, but the forecast only called for a bit of rain. Not enough to cause concern as we would be able to drive back to Montignano in just over an hour.

The rain began about half-way to Camucia/Cortona, when Jeannie commented that the hills in the distance looked white. It was then that we realized that the rain wasn’t rain, but small dots of snow. The small dots of snow grew larger and larger until it appeared that cotton balls were dropping from the sky. The white stuff accumulated quickly on the ground as we sped past and the landscape became entirely white as we drew closer to Camucia/Cortona. 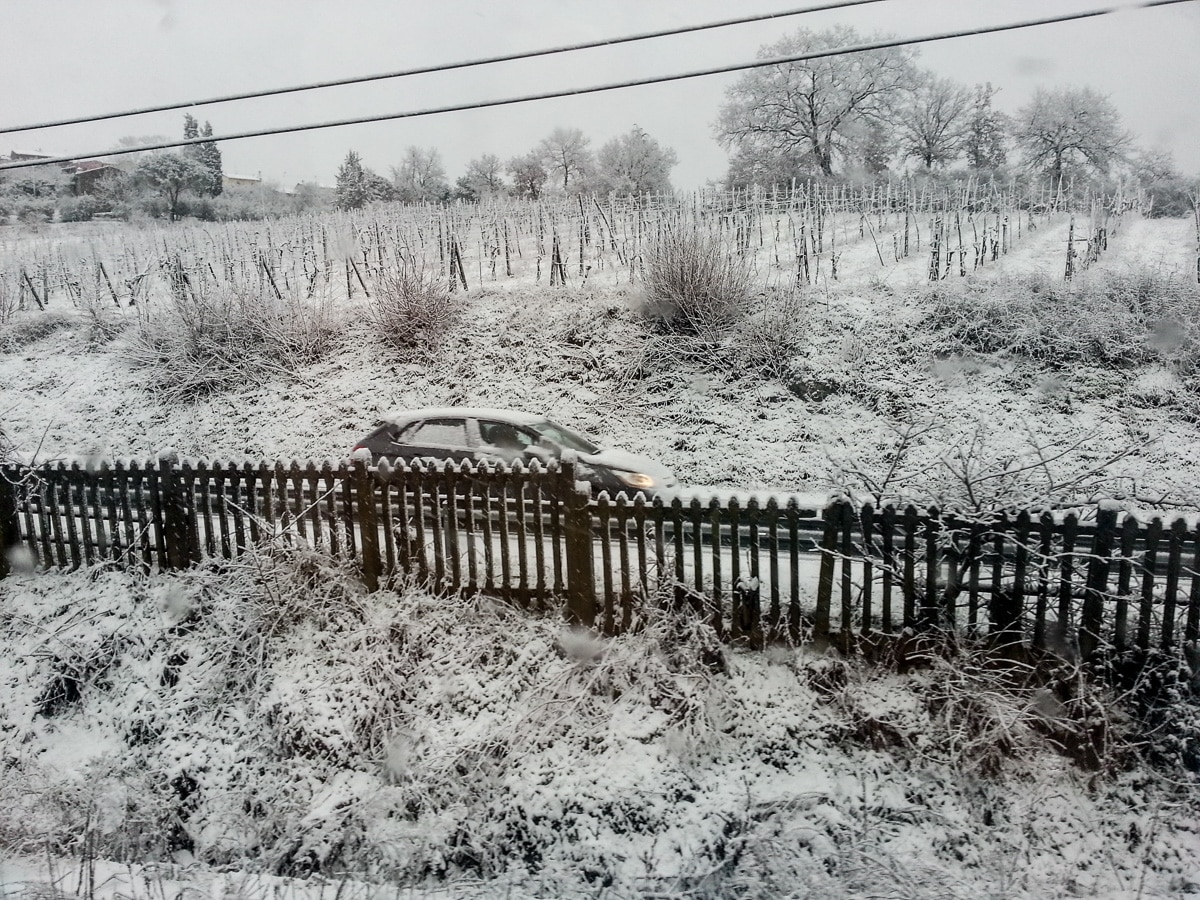 It was then we remembered that we would have to drive back in snow … if we could drive at all. Remember, we are Floridians, and driving in snow is not a skill that we have learned, especially in a tiny Fiat 500 without snow tires. Hrmmmmm.

As we pulled into Camucia/Cortona station, the conditions had not improved. We continued our discussions about attempting the drive into what could have been even worse conditions, or trying to figure out how and where to stay in Camucia and wait out the weather. 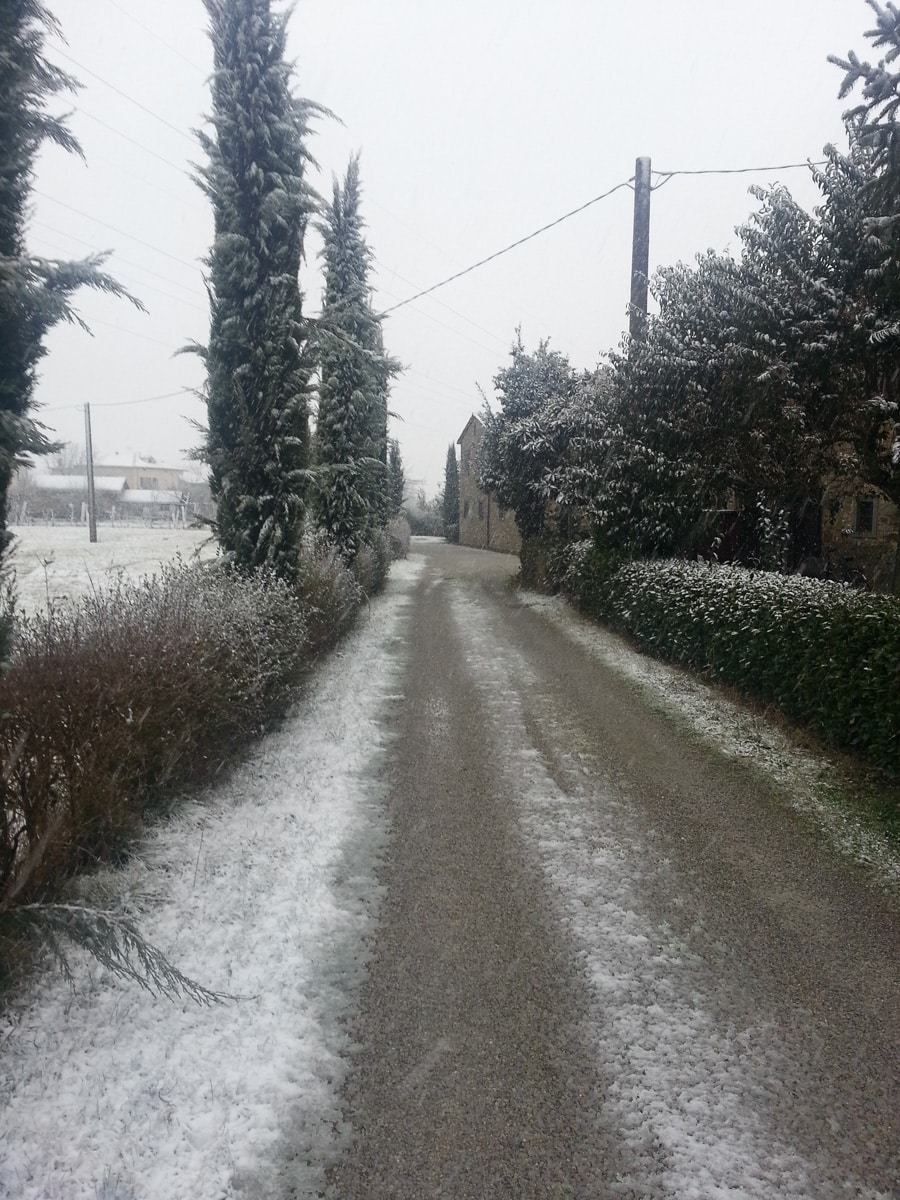 I left Jeannie in the station with our luggage to make the less than 1k walk to get our car at the Agriturismo il Borgo. Fortunately, the snow began to fall a little less heavily about halfway to my destination, and by the time I arrived there were only light, snowy flurries.

As luck would have it, Rodolfo and his wife and son were in one of the apartments cleaning when I arrived, and I explained our predicament as best I could. Rodolfo then explained that in Italy winter tires are the law for driving in snowy conditions, and hefty fines or confiscation of the car could result if caught. Snow tires or chains are a very expensive option when renting and we never had any intention of driving in snow. Besides it never or only rarely snows in Tuscany/Umbria … so they say.

Rodolfo even rode with me the short distance to his local tire place to have the guys there verify whether or not there were snow tires on the car; there were not. So, now what? 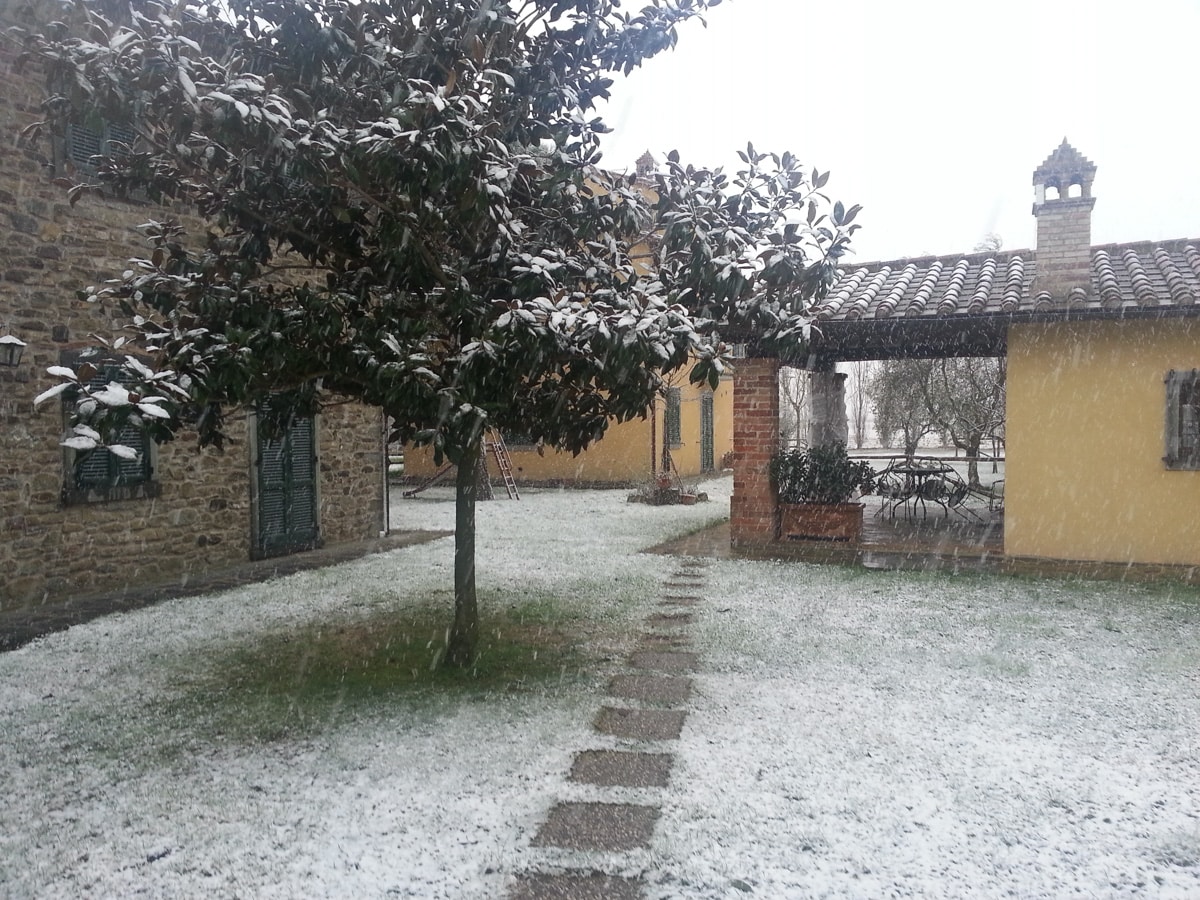 To make a long story shorter, Rodolfo kindly put us up in one of his smaller apartments for the night. As the snow was already melting, we drove into town and had a wonderful meal at a delightful local restaurant recommended by Rodolfo – “il Ghiottone” Ristorante.

We slept the sleep of the tired, trapped travelers.

But WAIT, that’s not all. The drive back to Montignano was quick and uneventful, and as we passed through Perugia, there was little or no evidence of snow to be seen.

Arriving at Herb and Jeanie Klinkers house, “Lucciole”, we unloaded our car, turned the heat back on then headed back out for lunch and groceries. The rains began as we exited the grocery store, and drizzled off and on the rest of the night. 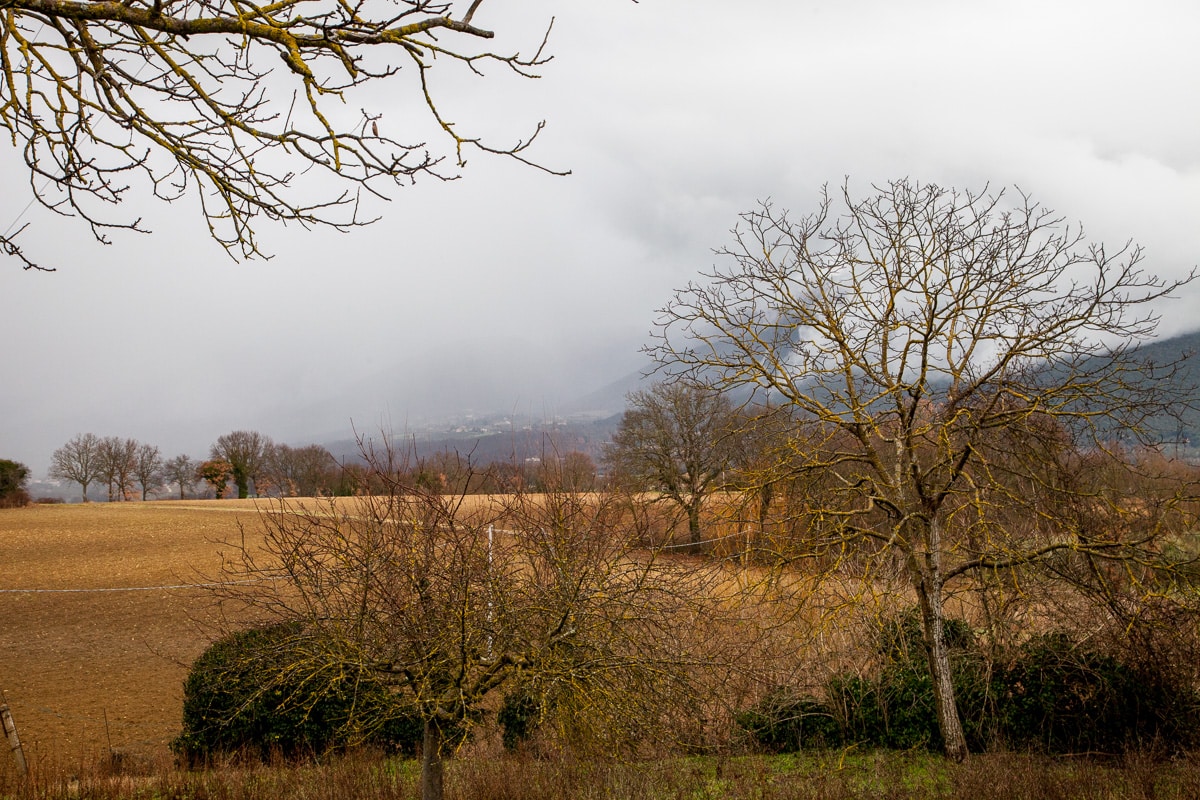 It felt good to be “home” in comfortable friendly surroundings. We slept the sleep of travelers at home.

When we awoke the next morning, we heard the sounds of … not rain, but hail. The small pellets bounced on the ground as it hit. The hail changed to sleet and then became larger puffy snowflakes that accumulated on the ground and branches. This continued for a few hours, and then it stopped. Almost as quickly as it had accumulated, the snow began melting. By evening the plowed fields were once again brown instead of white, while pockets of snow persisted here and there.

So now we have decided to move to Rome for a week before we return to Florida for six weeks. We hear there is less chance of snow there and we won’t have to drive.

We have loved our time out in the country and staying at “Lucciole”, but maybe winter isn’t the best time to be so far out. We hope to return to this area when the trees are green and the flowers are blooming. Oh, and maybe not quite as cold.

For now though, these Slow Nomads are moving on. 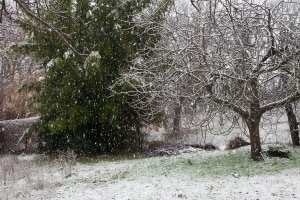 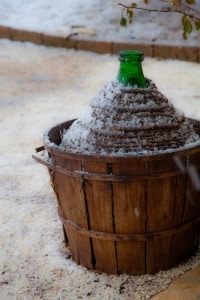 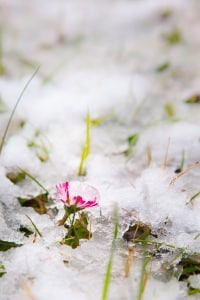 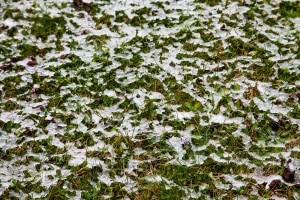