August-October 2019 – As with the previous post,  there were too many wonderful things in Porto to devote a post to each, so here is the second “six-pack” to share some more of the sights, architecture, and history that we experienced there. 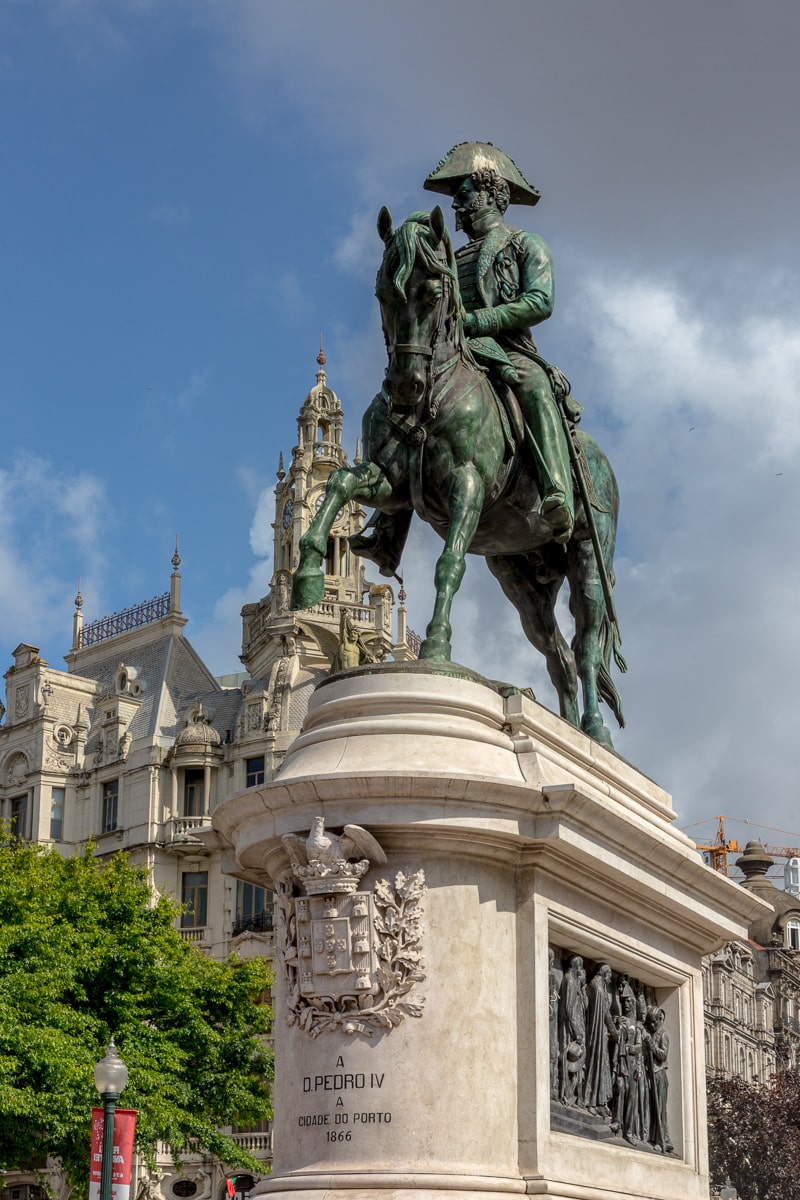 Named to honor the Allies of World War I, Porto’s dual main boulevard, Avenida dos Aliados outlines the open spaces of the grand Praça da Liberdade offering a dramatic change from the narrow streets of the Cais da Ribeira.

Plotted as a new urban layout in the 18th century it is bounded to the south by the Neoclassical Palácio das Cardosas, an 18th-century convent turned hotel, and to the north by the granite and marble modern, neoclassical Câmara Municipal (City hall).

This impressive square is surrounded by many architecturally impressive buildings intricate in design with their cupolas and cornices. Most of the buildings house cafes, hotels, banks and boutiques.

The central portion of the boulevard often hosts events such as the finish of the Volta a Portugal bicycle stage-race and various concerts. We were also fortunate to attend a free nighttime performance of the Casa da Música’s Baroque Orchestra.

The Praça da Liberdade and Avenida dos Aliados  is almost always active and buzzing, and we often reveled in its atmosphere as we passed through the area on our way to many other parts of town.

Churches of Porto (five of the dozens of churches in Porto) 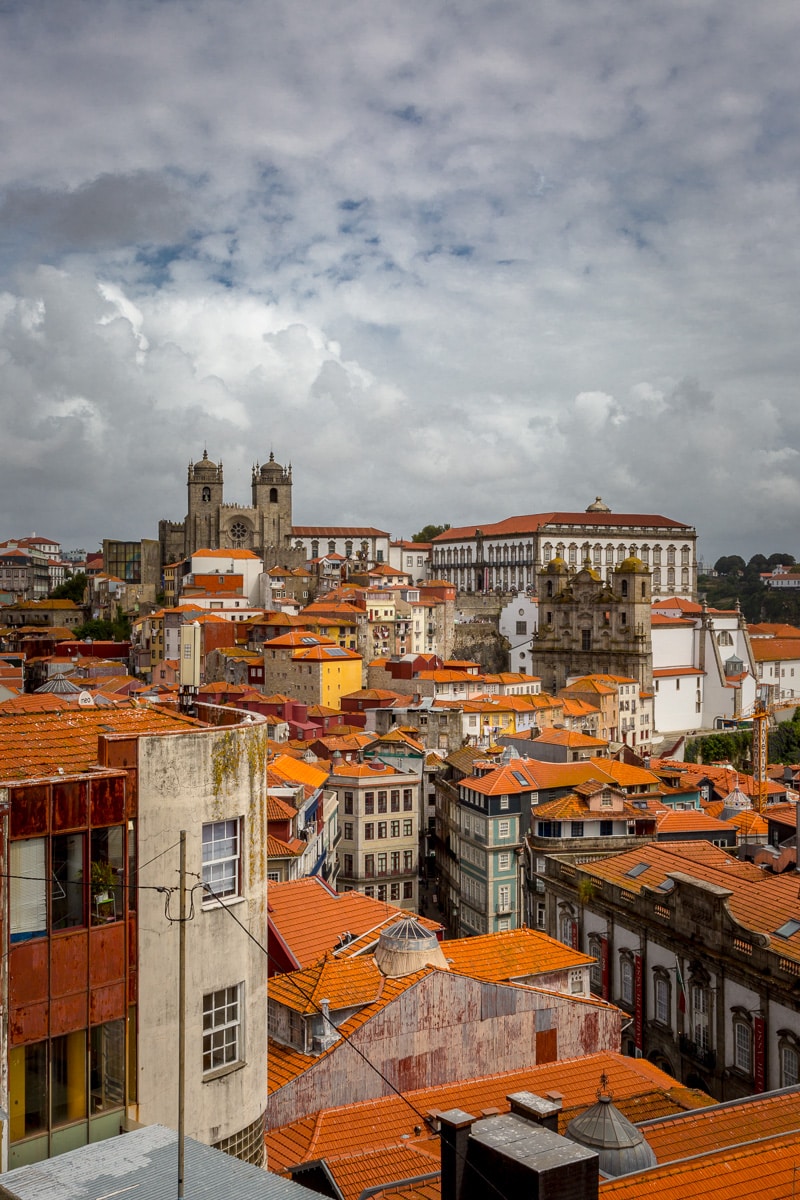 The Porto Cathedral, the largest church in the city, stands in the oldest part of Porto and was originally built between the 12th and 13th centuries. Established on a hilltop watching over the city, it features Romanesque, baroque and gothic architectural styles. One of Porto’s oldest monuments, this stern-looking building is flanked by twin, square towers with a rather plain stone facade reflecting its defensive role when it was built.

However, inside the Sé, as it is known locally, there’s a narrow Romanesque nave and choir that leads you towards the apse. The word “Sé” refers to the governing center, or “seat,” of the district where the church is located.

During the Middle Ages, the large public square around the cathedral was where all the trade and commerce were conducted. Also known as the Terreiro da Sé, it is an esplanade that lets you survey the city’s rooftops and monuments.

Adjacent to the Porto Cathedral on the the Terreiro da Sé,  the Paço Episcopal do Porto – the Episcopal Palace of Porto is the former residence of the bishops of Porto. Constructed in the 1700s, the highlight of the interior is its monumental stairway. 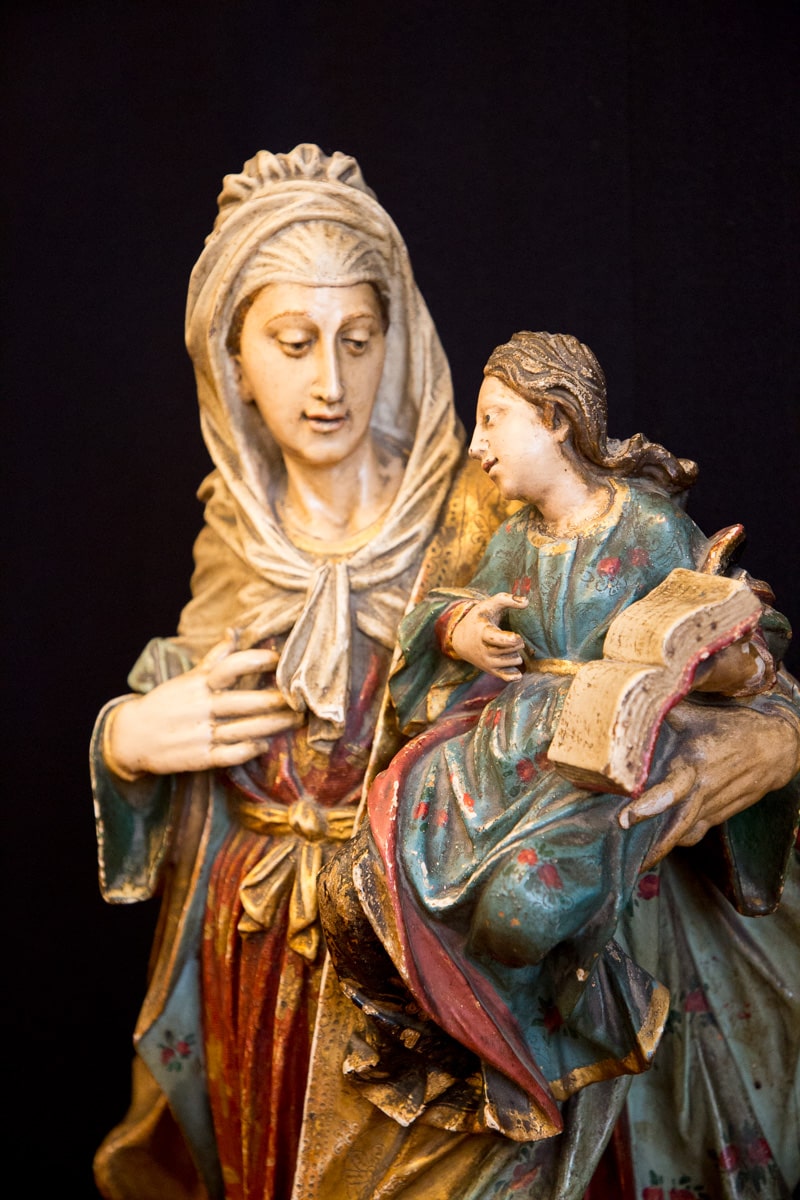 At first glance, this church, completed in 1425, appears rather austere on the outside, with its unadorned, Gothic stone facade completed in 1425; but once inside, the elaborately carved woodwork, lavishly covered in gold gilding, is everywhere. The extravagant interiors were renovated in the 17th and 18th centuries, and decorated with intricate carved panels covered by an estimated 100 kg (220 lb) to 400 kg (881 lb) of gold.

Opposite the main portal of the church is the Casa de Despachos, the Order House of the Venerable Third Order of St. Francis. It was built during the 1700s and designed by the same architect that built Clerigos Tower. Its underground catacomb is the graveyard of the Order, contains the bones of the monks deposited there over the past centuries. It also contains the impressive Treasury Room, with sacred art and silver pieces, and the beautiful Sala de Sessoes (Meeting Room).

There are actually two churches here, Igreja do Carmo and Igreja dos Carmelitas, which were built directly next to each other. The right church Igreja do Carmo is the more beautiful, if for no other reason than the blue azulejos on the right exterior wall, but inside, the Igreja dos Carmelitas is equally splendid. The churches dominate the lovely square Praça de Gomes Teixeira with its stunning Fountain of the Lions, and nearby, the University of Porto.

The twin-towered Igreja de Santo Ildefonso sits overlooking the Praça da Batalha near the pedestrian zone of Rua da Santa Catarina. Built between 1709 and 1739, the facade of this church is beautifully decorated with azulejos depicting scenes from the life of Saint Ildefonso and the Gospels.

Our wanderings in and about Porto often took us down Rua Sainta Catarina, the main shopping thoroughfare in Porto. In fact, every time we exited the Metro near the Mercado do Bolhão , the Capela das Almas or Chapel of Souls with its magnificent tile façade was the first thing we would see. The beautiful 360 m2 (3875 ft2) wall is covered with 15,947 tiles depicting scenes from the lives of St. Francis of Assisi and St. Catherine.

In 2001, the city of Porto was chosen European Capital of Culture. To mark the event, Casa da Música was designed and built as the first building in Portugal to be exclusively dedicated to music, either for public performances or for artistic training and creation.

We took the Metro to the Casa da Música to attend our first performance, arriving early to look around and enjoy a pre-performance glass of wine. The structure is divided into varied sized halls and smaller studios and classrooms. The medium-sized hall we were in allowed for an intimate experience by Fado Violado. Founded by singer Ana Pinhal, and acoustic guitarist Francisco Almeida, the four-piece group also included a bass guitar, and a percussionist (playing a cajon – literally a “drawer” or wood box). They had met and studied flamenco in Spain, and then integrated that style with fado, the iconic music of Portugal. This mixture of fado and flamenco music resulted in a delicate cultural fusion of both musical traditions. It was a wonderful musical event. The video below was of a performance a couple of weeks later also at the Casa da Musica.

About a week or so later we returned to the Casa da Musica for a guitar performance by P’las Cordas da Guitarra. The passionate sound of the Portuguese guitar served as the foundation for a concert filled with tradition. The two musicians displayed their virtuosity with an element of national identity, proudly introducing each of the compositions and composers who influenced the evolution of this nation’s unique musical style, and the Portuguese guitar. It was another outstanding performance. 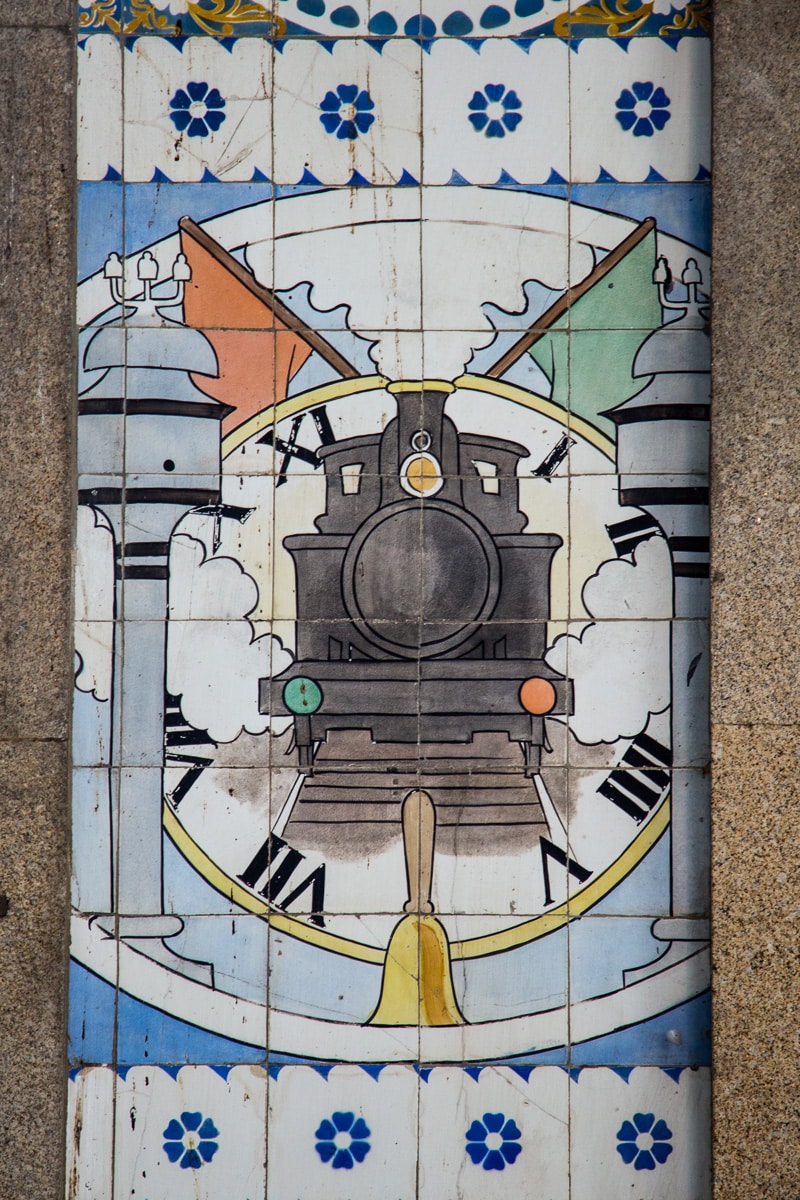 Whenever we would ride the train anywhere, we more often than not purchased our tickets and departed from the Estação ferroviária de São Bento or São Bento railway station. The other station, Campanhã railway station, was in some ways more convenient, but São Bento was a bit smaller and friendlier.

It was constructed over a number of years, starting in 1904 on the site of the Benedictine Convent of São Bento da Avé Maria that was initially built in 1518, destroyed by fire in 1783, later rebuilt, and was then demolished in 1892 when the last nun died.

The highlight of the building is the large panels of azulejo tile that were completed in 1916 and represent moments in the country’s history, with multicoloured panels depict rural scenes showing the people of various regions.

Always busy with arriving and departing tourists or commuters, or tour groups being escorted through on their one-day stopover in Porto, the approximately 20,000 azulejo tiles never ceases to impress the eye. 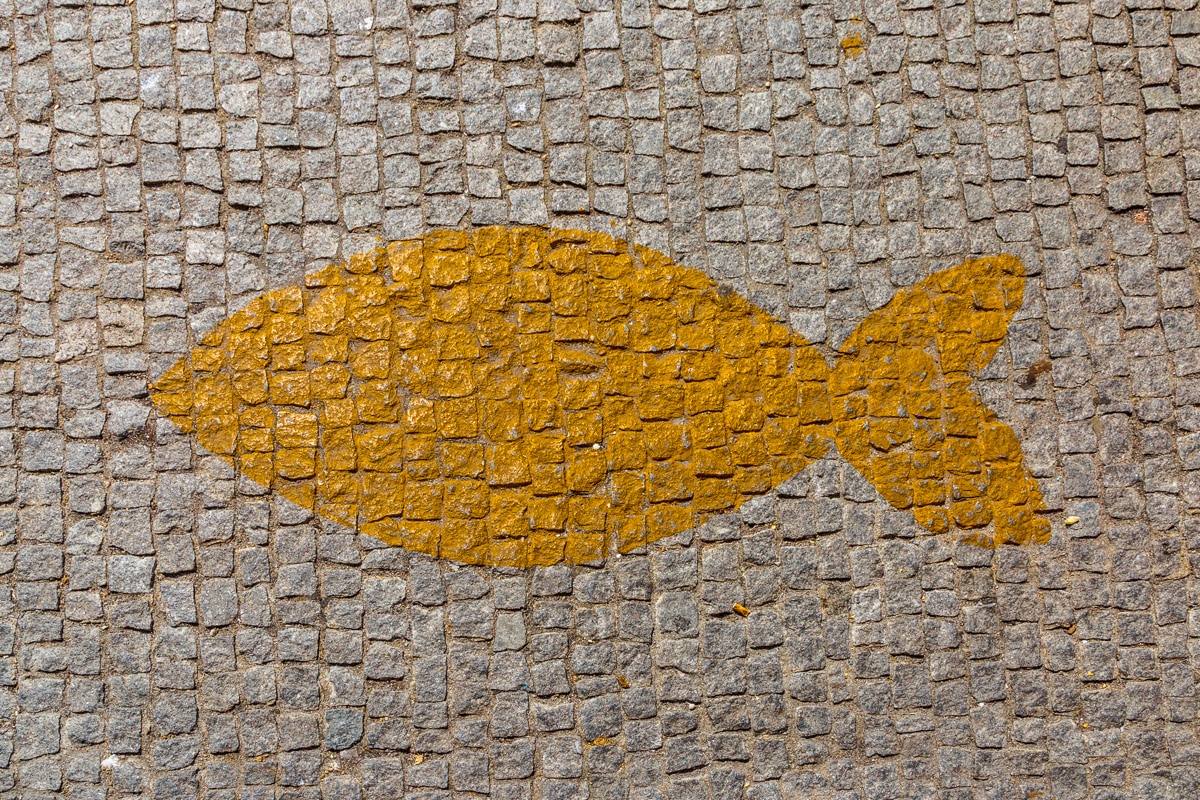 The area’s southern beaches lie along the coast south of the Douro River, and we posted about them previously. The beaches north of the river are easily reached from Porto via bus 500 from central Praça da Liberdade.

Adjacent to the mouth of the river, the Foz do Douro is a trendy district where the Douro enters the Ocean. It has a promenade with palms and pines. The Farol Molhe do Douro lighthouse meanwhile guided vessels in and out of the Douro for 120 years, but was decommissioned in 2009. The long  promenade along the ocean allows for romantic strolls and drinks or a meal at one of the many establishments in the area.

Further up the coast is Matosinhos, just north of Foz do Douro. It is Porto’s main beach and a genuinely real fishing port. The town is a destination in its own right, with 17th-century forts, Baroque and medieval churches, Parks, an Aquarium, and more importantly – fish.

The local fish market – the Mercado Municipal de Matosinhos, is the place to go for fish so fresh it’s almost still flapping. Restaurants line both sides of the seaside walking street, most offering outdoor seating with outdoor grills filling the air with the smell of charcoal, smoke, and fresh fish. We didn’t eat at any of those places, but more on the seafood later. 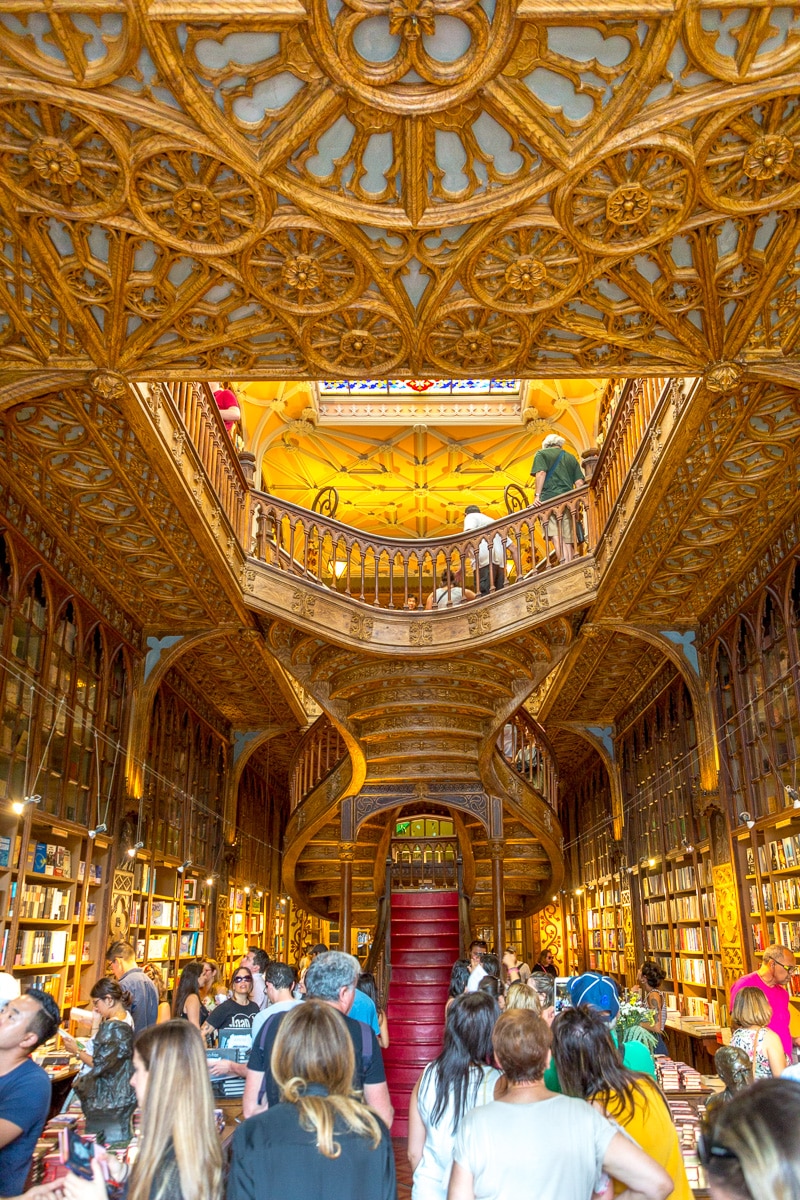 This delightful bookshop on Rua das Carmelitas occupies a building that goes back to 1906, though the actual business is much older. A very popular tourist attraction, every time we went by the queue to go in stretched far down the street. The Livraria Lello has an Arte Nova (Art Nouveau) design, with a beautiful facade covered with intricate neo-gothic carvings. Inside, its extravagantly carved plaster decorations are skillfully painted to resemble wood and an elegant stained-glass skylight filters sunlight into streams of color. Its curiously twisting wooden staircase inspired “Harry Potter” author J.K. Rowling when she lived in Porto as an English teacher from 1991 to 1993.

The bookshelves reach from floor to ceiling, with small busts of famous writers peering down at you from the shelves. Although the books are all in Portuguese (with a small section in other languages) the temptation to pull down a book and thumb through the pages is overwhelming. After all, it is a bookstore.