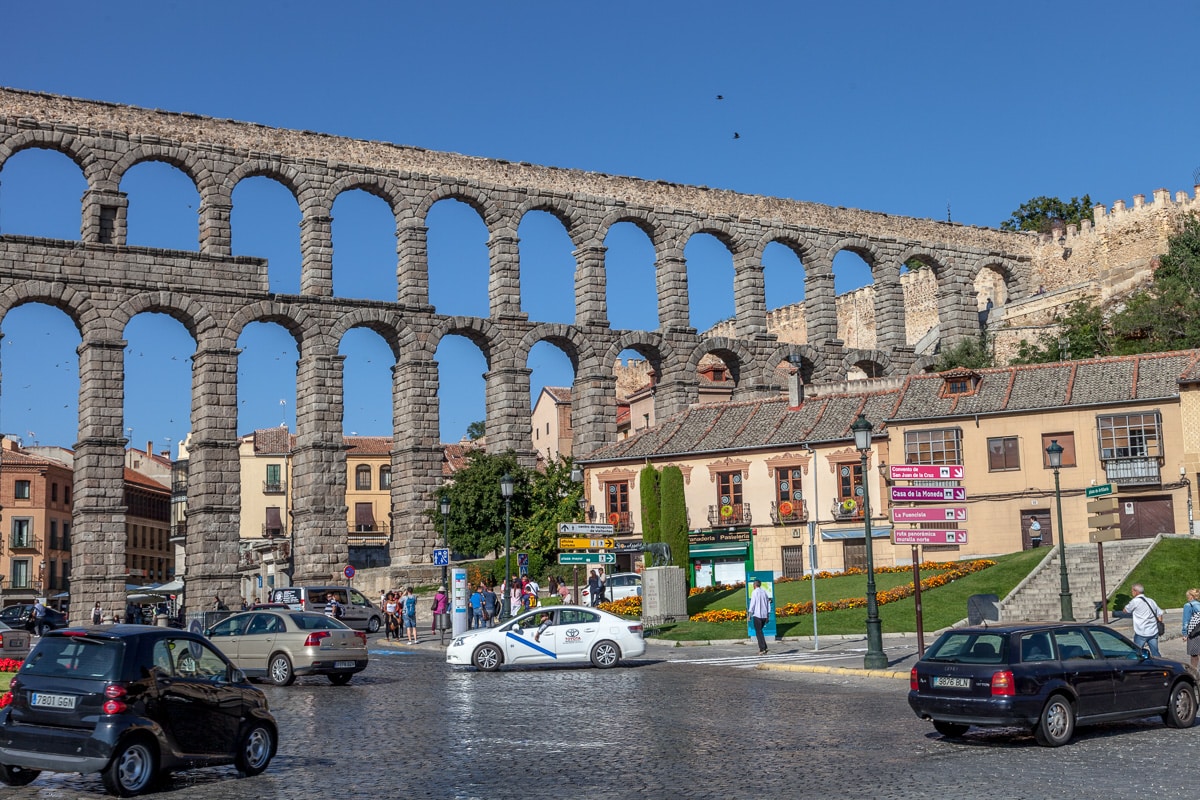 (1893-1987) is a name that every guitarist knows or should know. He is considered the greatest guitarist of all time as well as the father of the modern classical guitar. Though he was not from the town of Segovia, it was through his name that the town was to me at least somewhat familiar.

Another rather famous reference to Segovia is the novel, “For Whom the Bell Tolls” by Ernest Hemingway. Set during the Spanish Civil War (1936-1939), the story takes place in the hills and mountains near the city of Segovia.

We took an early train to go to Segovia, about 100 km (60 mi) NNW of Madrid. The ride across the dry, arid countryside took about an hour by high-speed train and we arrived under cloudless skies and warm temperatures.

Segovia was originally a Celtic village. It was taken by the Romans in an important battle fought at the city in 75 BC. Later, in the 8th century AD, the city was largely abandoned when the Islamic invasion of Spain occurred. However after the conquest of Toledo by Alfonso VI in 1085 it gained more importance and began a period of resettlement. Located on important wool and textiles trading routes, Segovia reached its golden era in the late Middle Ages with an increasing Jewish community contributing to its growth. 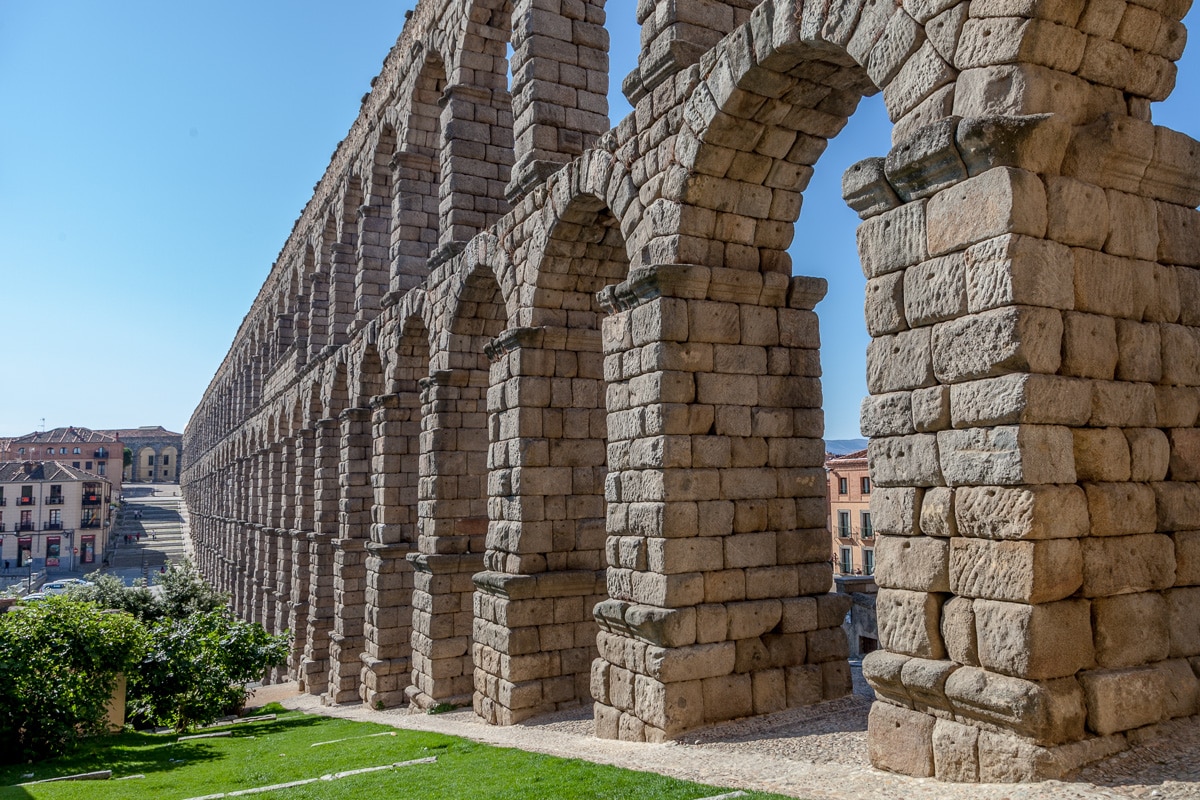 The remarkable influences of three great cultures: Christian, Jewish and Muslim can be seen throughout the town today. But the first truly impressive structure that we saw when we got off the bus from the train station was the massive Roman aqueduct.

Dating from the late 1st or early 2nd century AD, it is considered one of the the most important Roman civil engineering works in Spain, it consists of about 25,000 granite blocks constructed without any mortar, and spans 818 m (2684 ft) with more than 170 arches, the tallest being 29 m (98 ft) high.

It is a truly beautiful structure; tall, slender and elegant. It is very different, though no more beautiful than the similar aqueduct, the Pont du Gard, we visited while we were in Avignon. They have both withstood the tests of time and man, and while possessing their own beauty, both served an immensely practical purpose – to move water from a source to a population. In the case of the aqueduct of Segovia it transported water 17 km (11 mi) to the city until the mid-19th century. 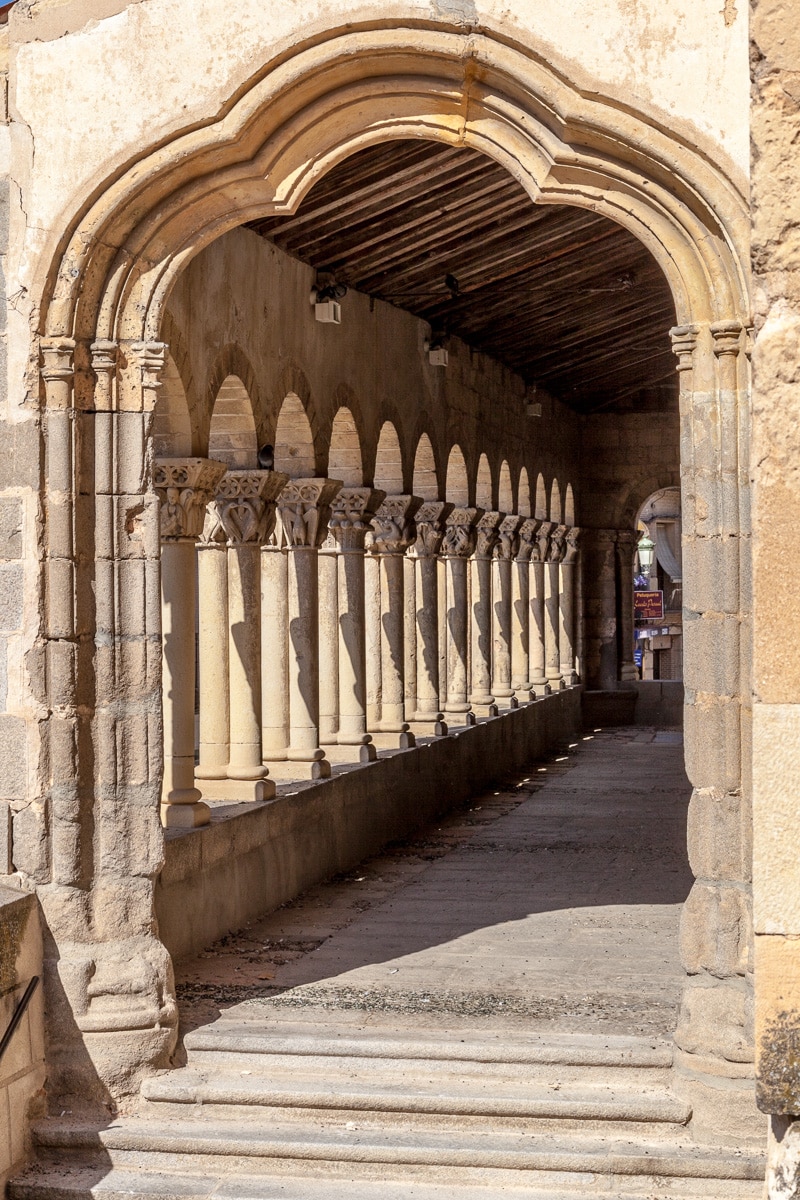 As we walked the ancient cobblestone streets, we crossed the Plaza de Medina del Campo, and found the Iglesia de San Martin. It is a 12th century Romanesque-style church with a beautiful atrium surrounding two of its sides. The capitals of the ancient columns, although worn by time are beautifully decorated. 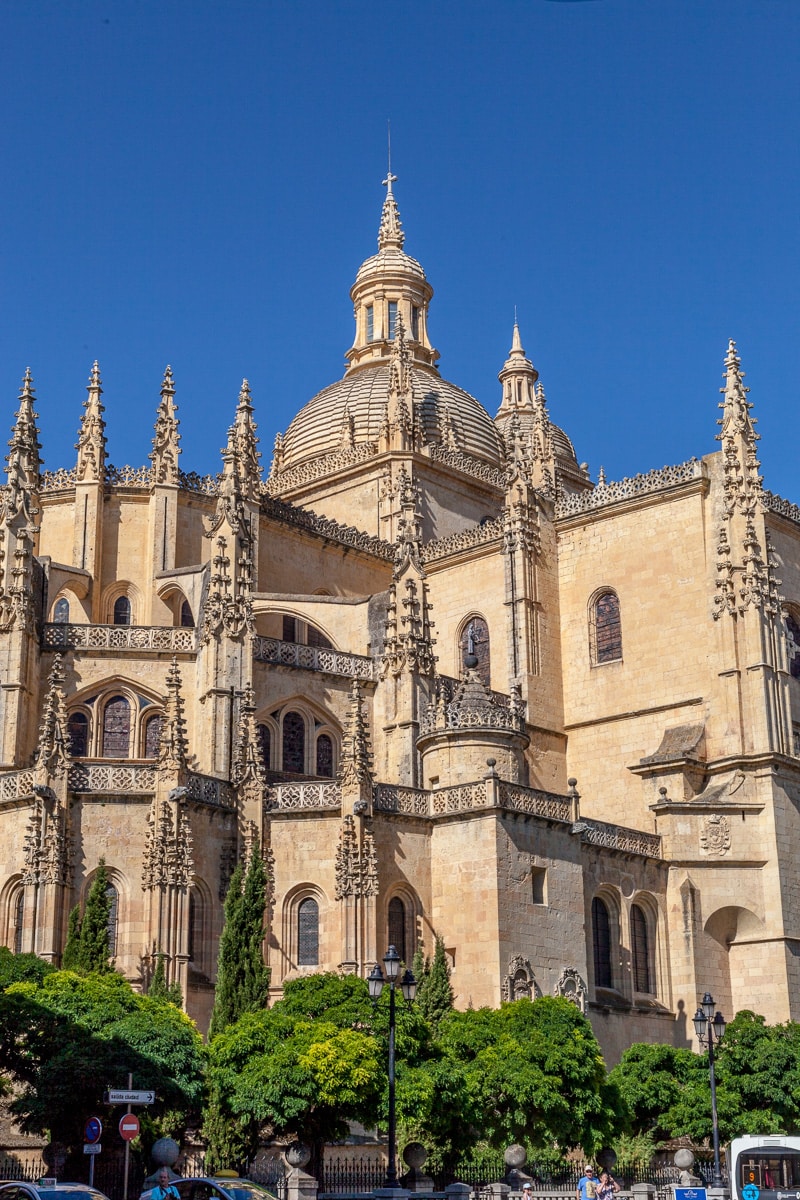 Further into town was the Catedral de Santa María de Segovia or Segovia Cathedral, located in the Plaza Mayor. It is a magnificent 16th century Cathedral that stands over Segovia and is visible for kilometers (miles) around. Built in a Renaissance Gothic style after the destruction of the previous Roman cathedral, it is considered the last Gothic cathedral built in Spain. The bell tower reaches almost 90 m (300 ft). The current stone structure crowning the tower, dating from 1614, was erected after a major fire caused by a thunderstorm destroyed the wooden spire. 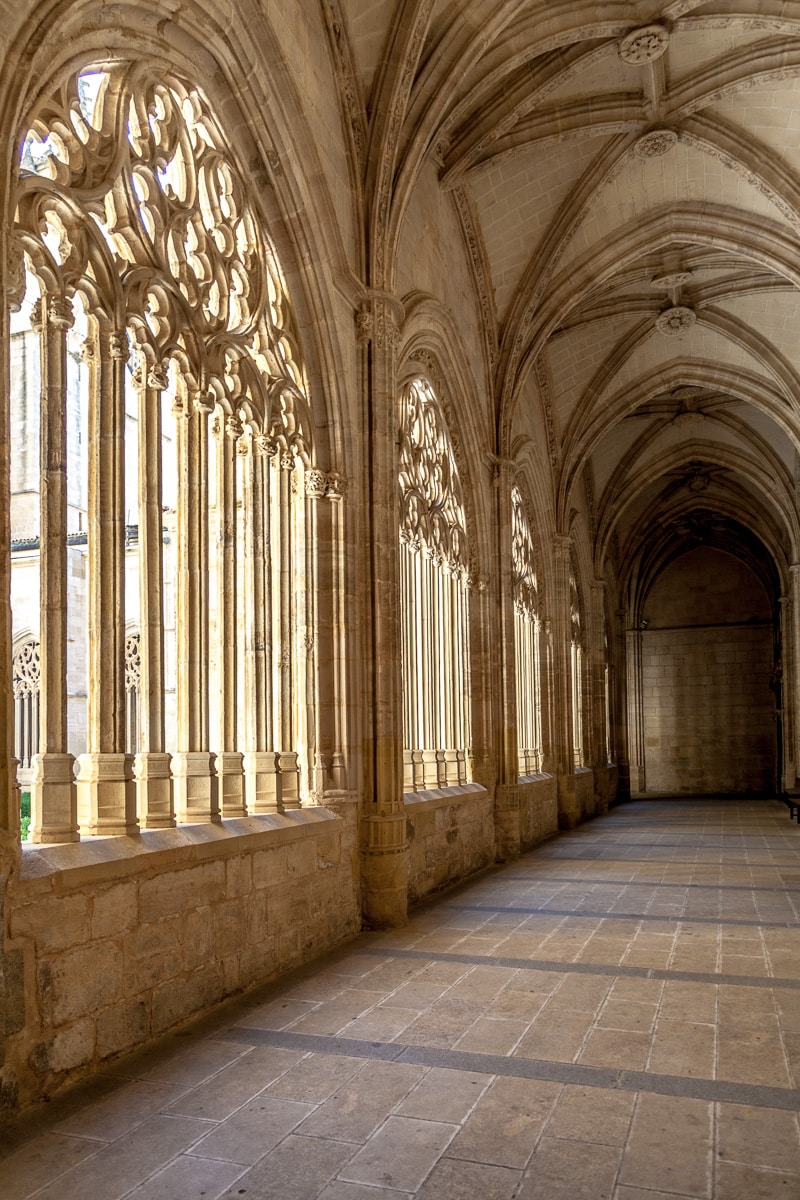 I wanted to climb the bell tower, so leaving Jeannie in the cathedral, I joined the 1+ hour tour (the only way to ascend). The view of the city and the surrounding countryside from the bell tower is spectacular. As you look past the large bells that, in some cases, are well over 400 years old, the red tiled rooftops of the city give way to the parched brown hills that extend to the distant mountains of the Sierra de Guadarrama to the northwest, and as far as the eye can see all around.

The day was quite warm as we made our way through the streets, moving from shadow to shadow of the ancient buildings as we could to avoid the hot sun. It was after noon, and we wanted to see the famous Alcazar before lunch and our return to Madrid. 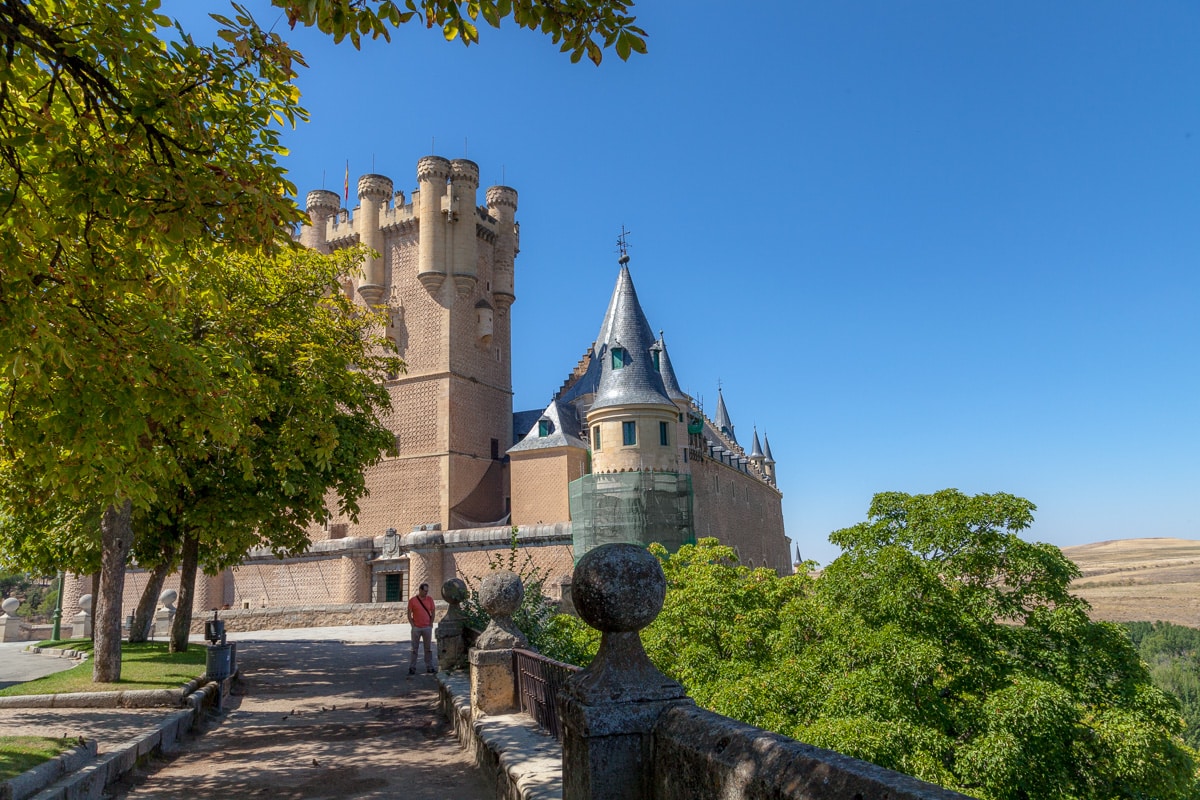 The Alcazar of Segovia is a fortress and royal palace built on a stone prominence at the northwest end of the town high above two rivers, it was first documented in 1122, though it could have had Roman or Celtic origins. Devastated by a fire in 1862, it was later rebuilt, and now houses a military archive and museum. Its fairytale turrets allegedly inspired the design of Disney’s Cinderella castle. Though we weren’t able to tour the inside, the views of the fortress and the city walls nearby were impressive.

Working our way back towards the Plaza Mayor, we wandered off of the main streets and enjoyed a peaceful garden along a high cliff that constituted a part of the old wall. The shade of the large, old pines together with the strong, dry breeze made for a comfortable spot to hide from the sun’s strong rays. 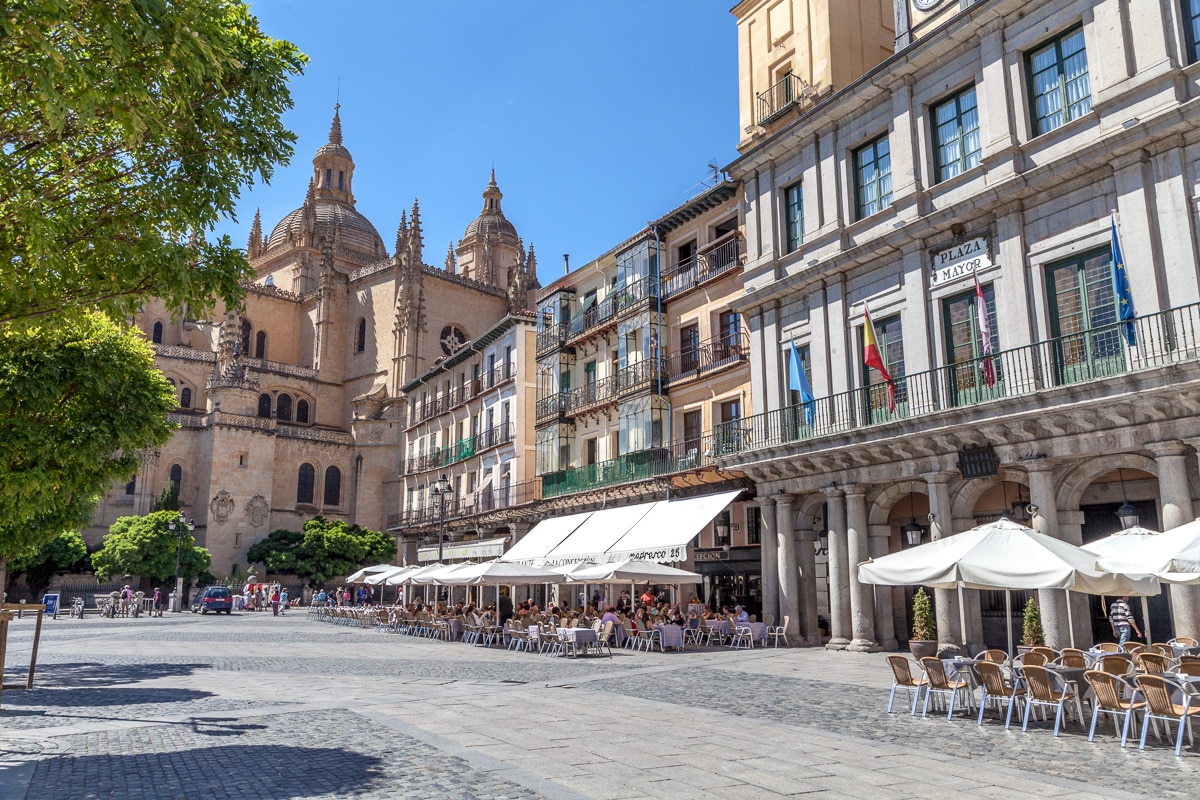 We had lunch in the Plaza Mayor under a large umbrella at a cafe that shared a view of the Cathedral as well as the old Teatro Juan Bravo (1918). I had one of the traditional Segovian dishes, “roast suckling pig”, it was crispy on the outside and tender and flavorful on the inside; while Jeannie had a light sandwich.

After lunch we had enough time to spend a few more minutes around the aqueduct before getting the bus for the train station. As the angle of the sun had changed so had the character of the graceful, ancient structure. Now casting its long shadows in the opposite direction from the morning, the light played a more dramatic role in emphasizing the size of the monumental construction.

The bus was right on time to take us back to the RENFE train station where a high-speed train would return us to Madrid. It had been a wonderful day in this historic city, and from now on whenever we hear classical guitar as defined by Andre Segovia, we will think of our time here.