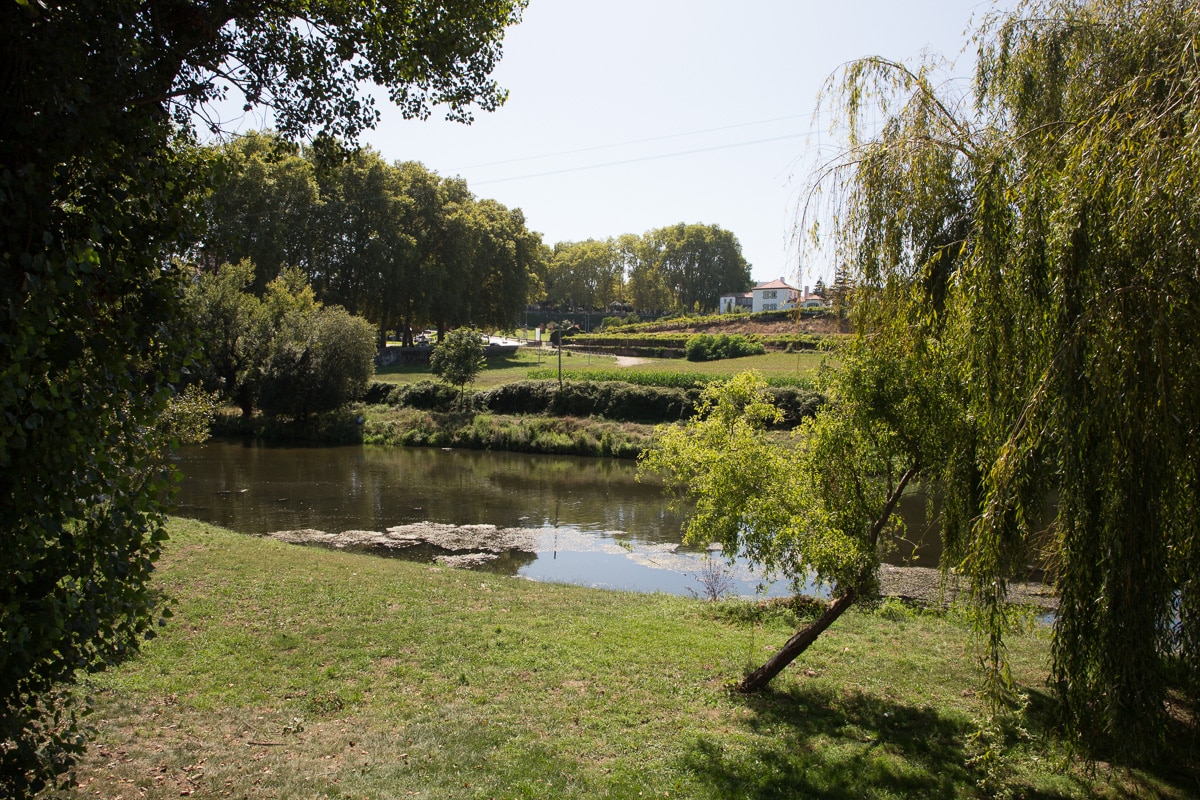 2 September 2019 – After our “pequeno almoço” (i.e. breakfast, literally small lunch), we walked to Porto’s São Bento station to get tickets for this day’s trip to Santo Tirso. We often like to visit small, somewhat obscure towns and villages on our travels and Jeannie had researched several, including Santo Tirso. We had also noticed it as our train passed by on a previous trip to Viana do Castel, so, why not. And though we had no real expectations, it certainly turned out to be unexpectedly delightful.

The train ride to Santo Tirso, located on the Ave River, was short, only 25 km (15.5 mi) from central Porto. And as we left the train station a young man stepped up to us and said something about a ride into town. Motioning toward his van, we saw that it was labeled as the town’s free shuttle, and as the train station seemed quite a hike into town we took the ride. He dropped us in town across the street from the weekly market, and as we got off, he then pointed toward the town center to orient us. We offered a tip, but he would’t take it. 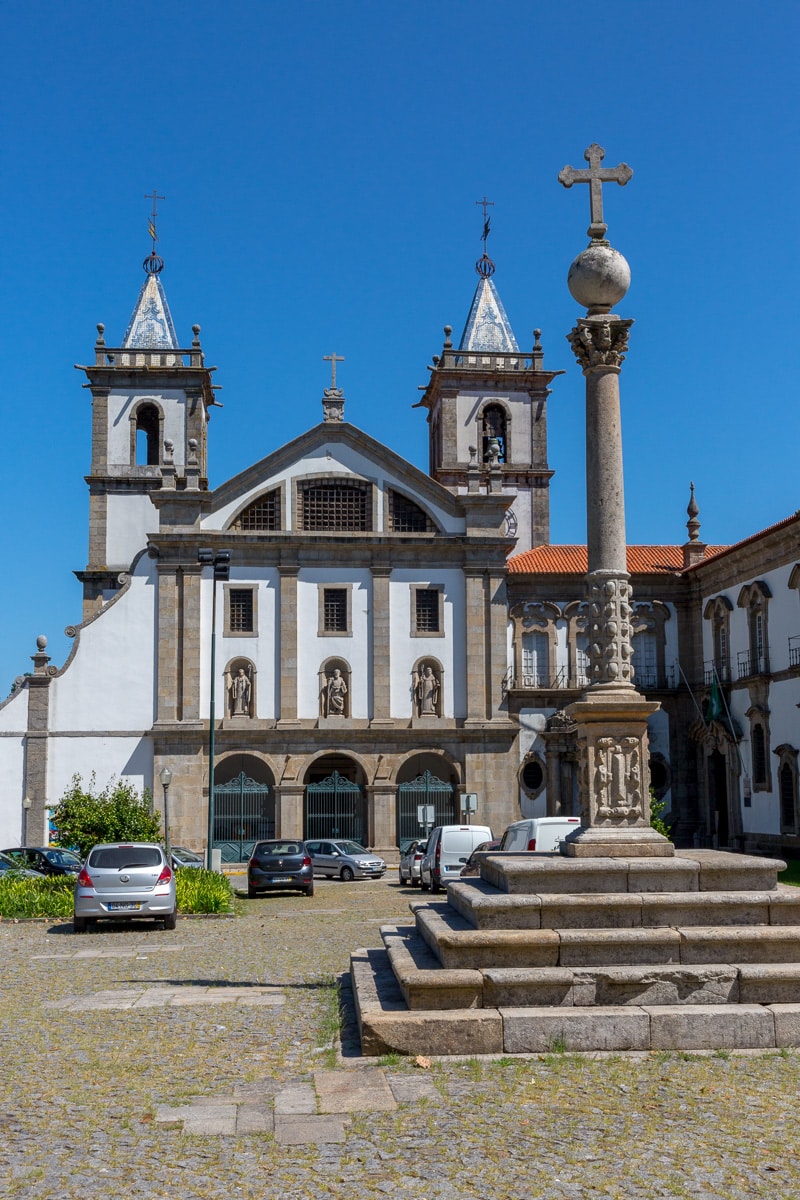 Santo Tirso took shape in the early Middle Ages around a Benedictine monastery, built in 978, and is still one of its main attractions, easily spotted by its towers with pyramidal, tile-coated domes. After the dissolution of the monasteries in 1834, the town became a center of textile industry. In the late 18th and early 19th Centuries, the Escola Profissional Agrícola Conde de São Bento, or as it is now called,the Conde de São Bento Agricultural Professional School took over the monastery buildings. The other attractions of the city is its collection of public contemporary sculptures. 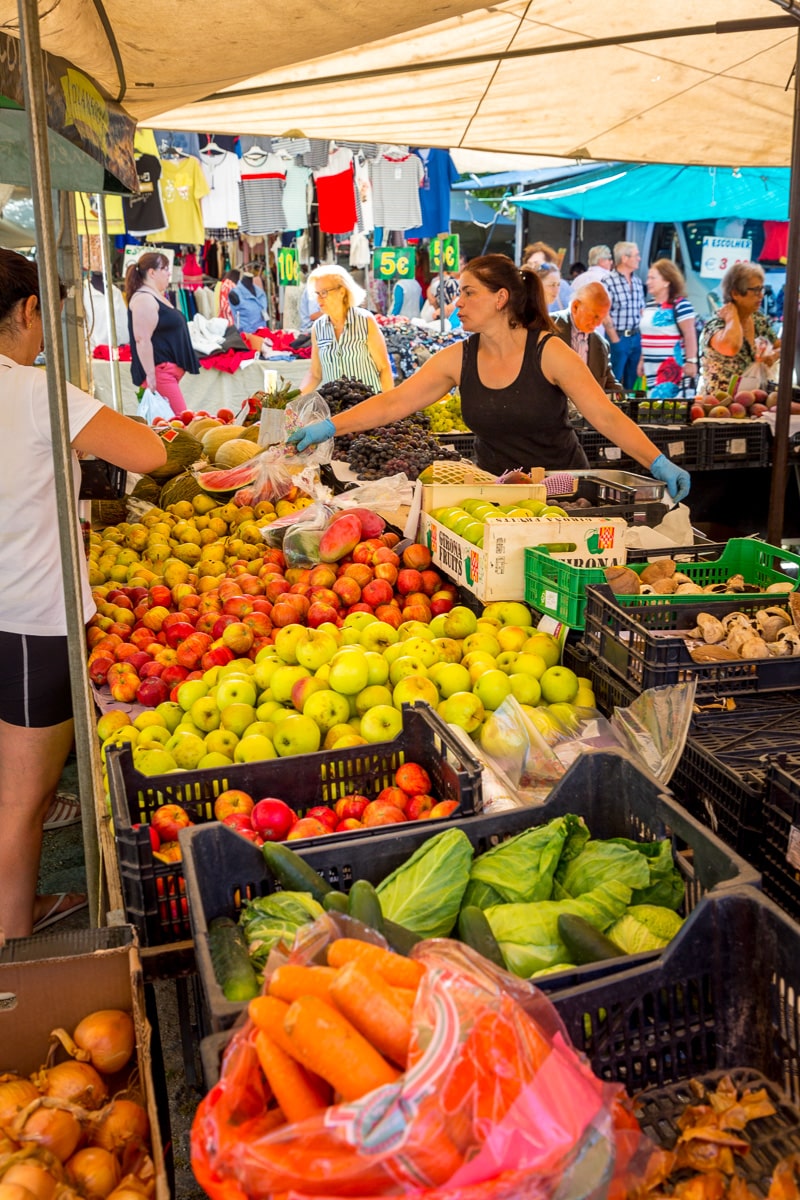 But, today was market and fair day, held every Monday in the summer! As we looked around after getting of the bus, there was a cloud of mostly white, individual canopies protecting the vendors and their wares from the hot, intense sunlight. Joining the throngs of people in the artificial shade, we wandered. There was an amazing array of products — animal, vegetable, and mineral. There were lots of household items, pots and pans, carpets, clothing, shoes, linens, and then produce and fruits, meats, sausage and ham, then plants and flowers. That was just the market half. The “fair” portion was primarily a flea market and garage sale, with everything from used books, clothes, furniture and tools, to tires. 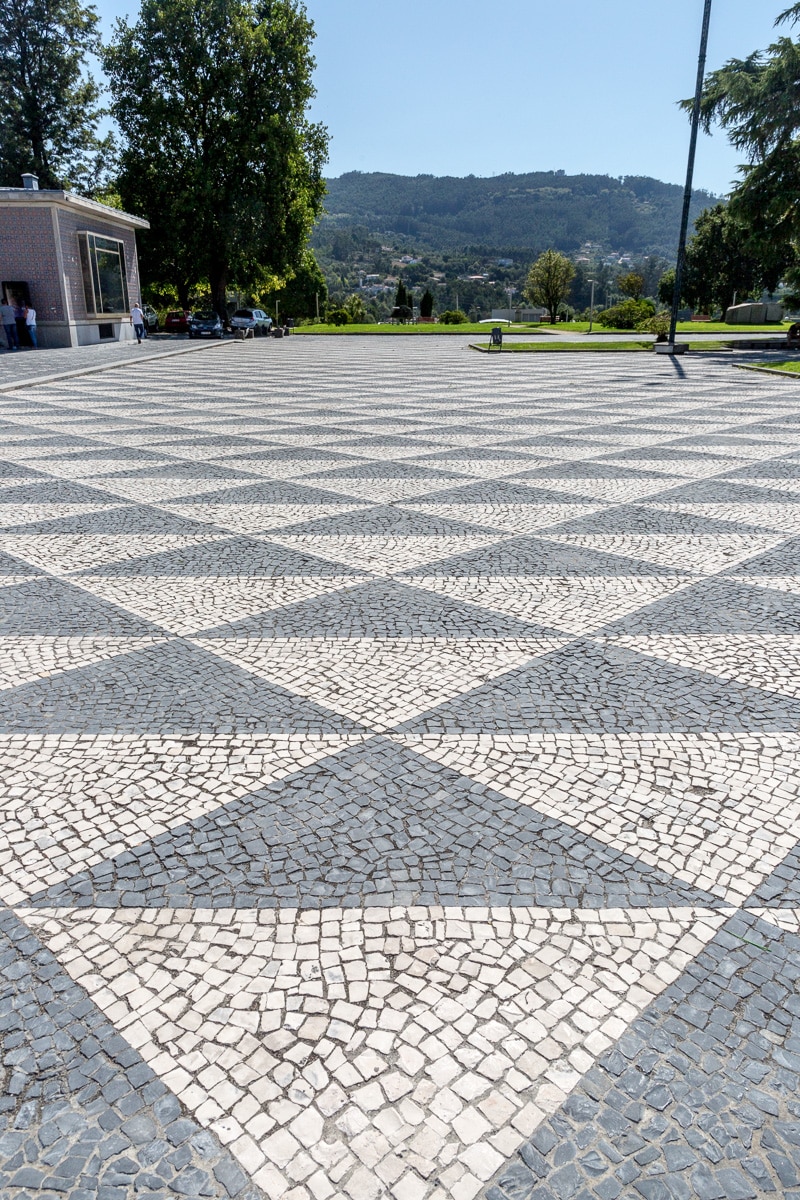 As we turned our wandering toward town, we began looking for a lunch place, though it was still relatively early. It didn’t take long to explore most of the town, and by then we were hungry. We passed a number of sandwich shops, but as we started to pass by Christo Rei restaurante, we saw lots of people and decided to go in. It was a good sign that it was busy, though there was a short wait for the menu. We each ordered one of the pratos do dia (plates of the day) — Jeannie had baked chicken, which came with roasted potatoes and rice, while Chris had meatballs with pasta. Both dishes were good and flavorful. Then, as we finished, we saw bowls of fruit being served for dessert, so we each ordered one. Ha, canned fruit cocktail — but it did bring back childhood memories! After that we both had espressos, and the total bill for lunch came to €13. 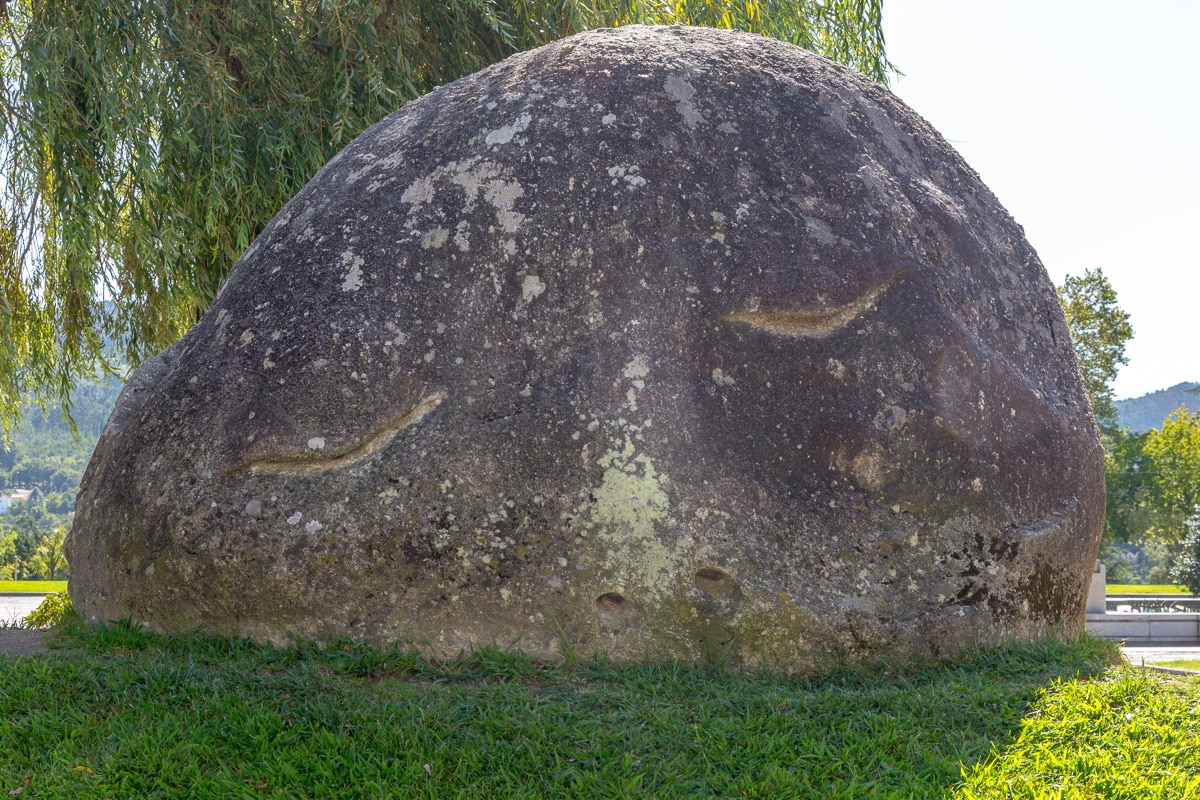 There were several nice parks in this charming town, and scattered throughout were 54 works of art by world sculptors.  Sculptures in the gardens, sculptures in parks, sculptures in squares. Santo Tirso calls itself the European Capital of Contemporary Sculpture in Portugal. There were many more than we could find on foot.

As we walked through the town, we admired the many flower beds, gardens, and medians decorated with masses of colorful flowers and plantings. The Igreja Matriz de Santo Tirso and the Mosteiro de São Bento monastery that now housed the municipal museum were our next destination, so we made our way down to where they were located near the Ave River. 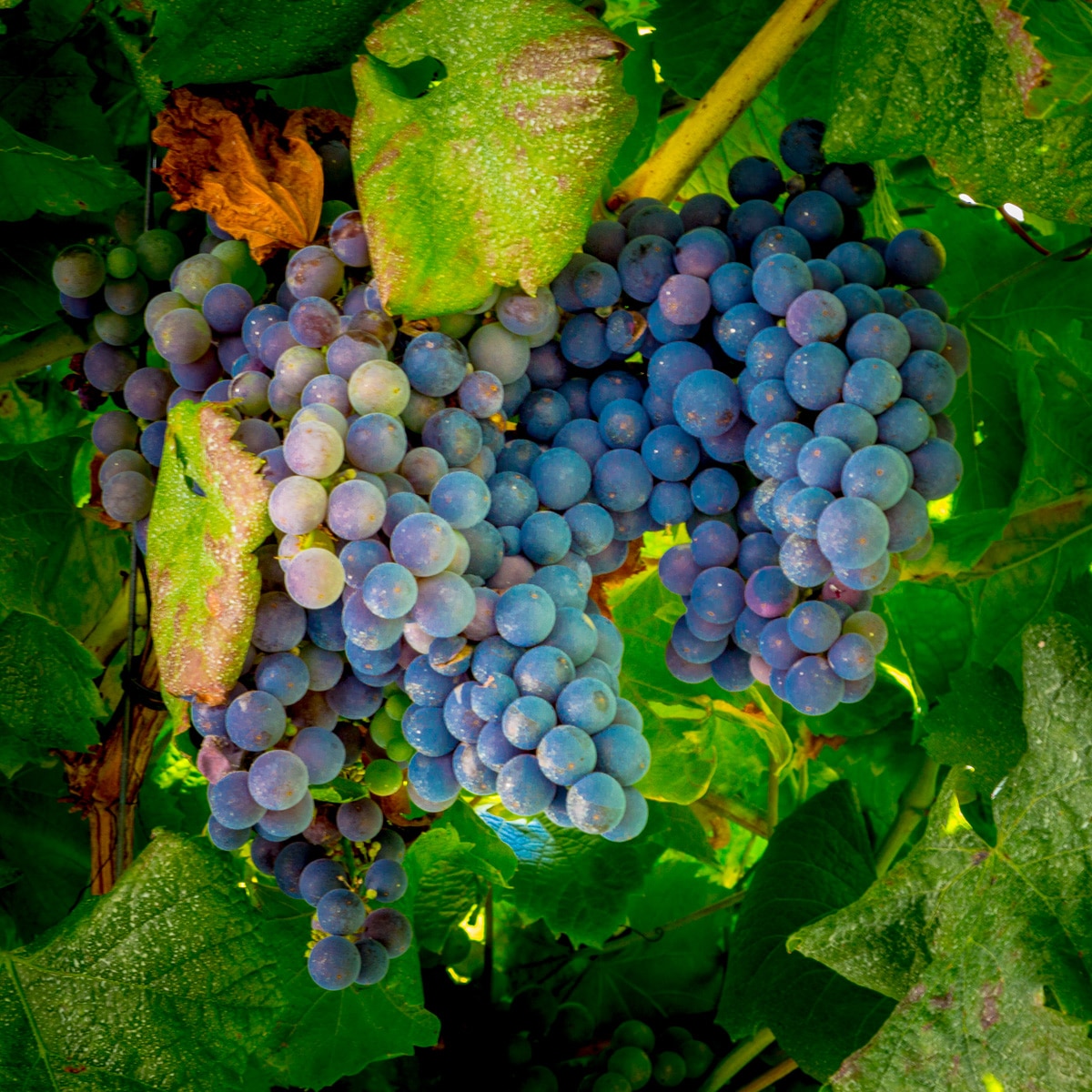 As it turned out, both the church and museum were closed that day, but we entertained ourselves by wandering the grounds of the Agricultural Professional School that occupied some of the monastery’s buildings, and whose grounds extended to the river. It seemed that we were between semesters, so not much was going on except that the grape vines shading some of the walkways were busy producing grapes that were quite tasty.

We then walked across street and up a hill to Parque Dona Maria II where we stopped at an outdoor café for a pingo and espresso. Shady, with a delightfully cool breeze, we sat and admired the view out over the church and former monastery. 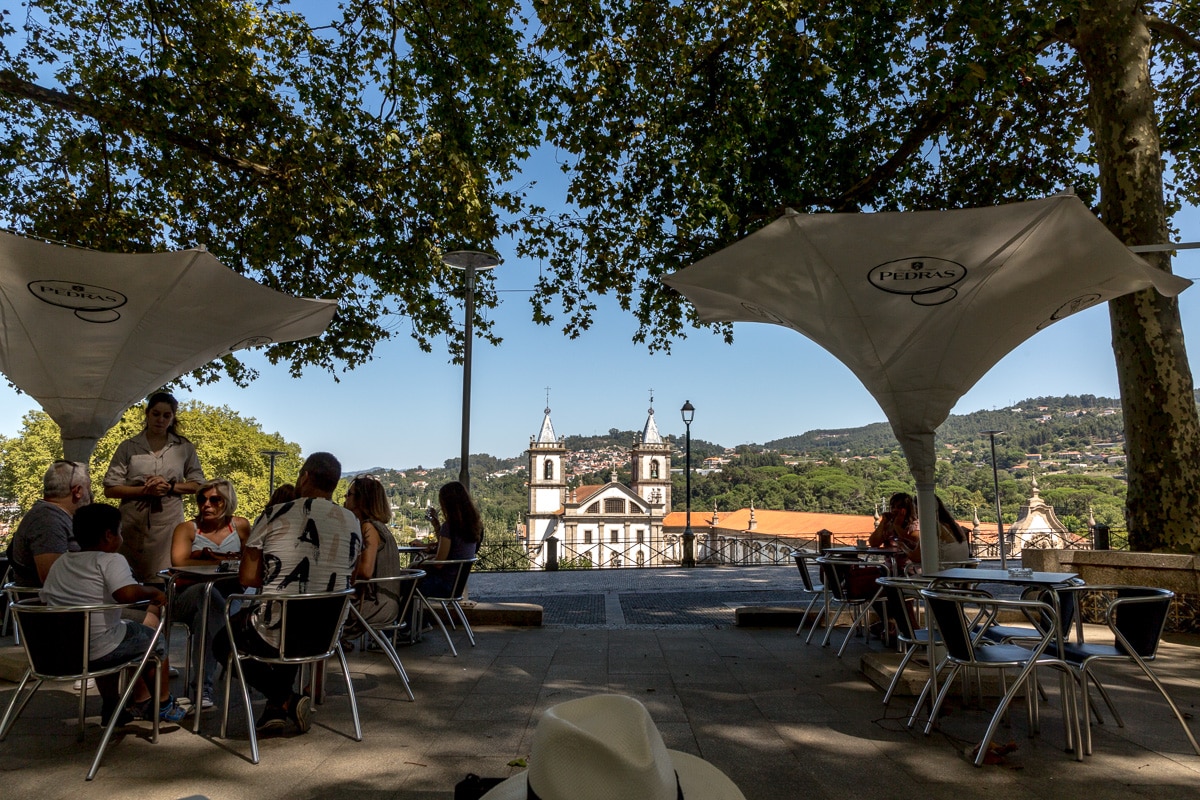 Walking back into town, we couldn’t find a schedule for the shuttle to get us back to the train station.  Luckily Google maps gave us a route on smaller streets and wasn’t too far for us to walk. It was a hot day though and we hoped to come across a cafe or shop along the way to get some water, but there was nothing on our walk nor at the train station. Budget cuts and declining use often mean reduced services particularly at smaller, older train stations. Fortunately the return was short ride, and we got off a stop early at Estação Campanhã,  taking the metro home since it was a shorter walk that way, and it was still hot.

Ah, home — then a shower, some light nibbles, a salad, wine, and sleep. Life is good.