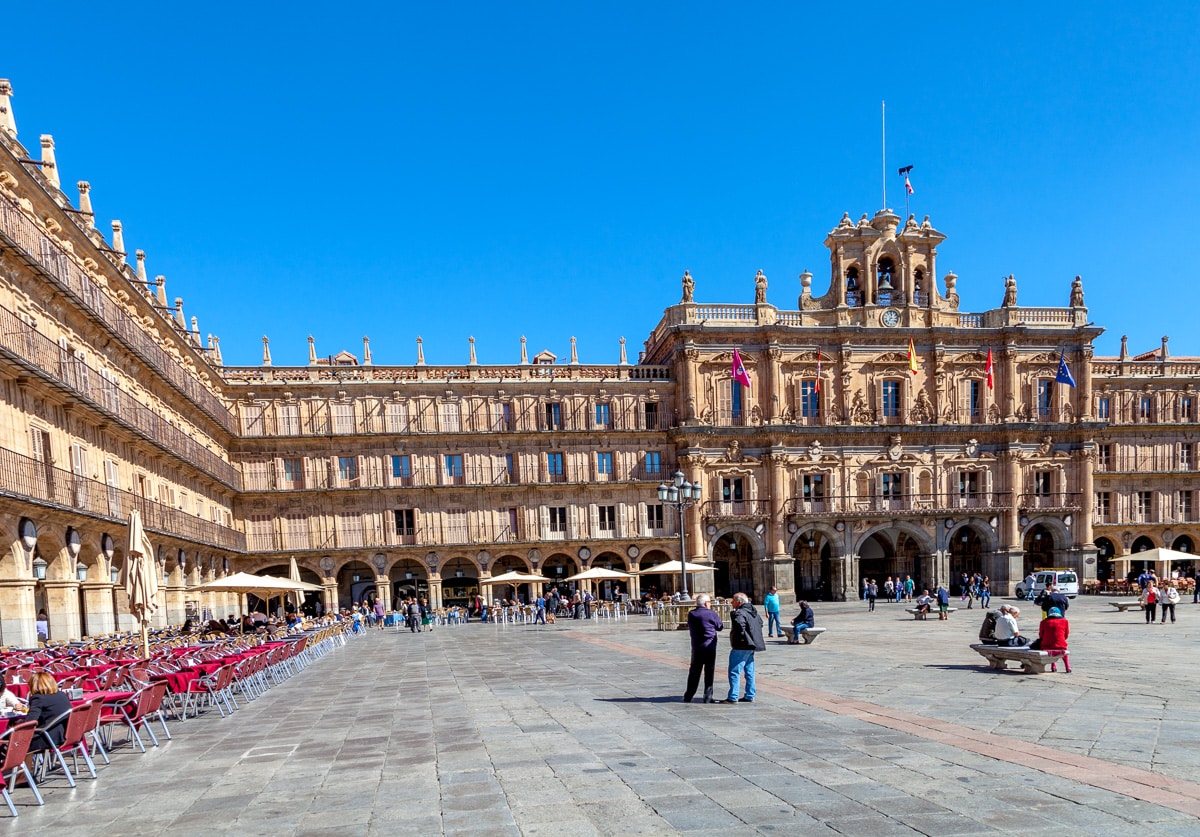 There is an energy that can be felt when you are in a university town, and there was such a feeling in Salamanca. Maybe it was that there are 30,000 students at the University of Salamanca or just a larger than average number of young people for a city, but the energy was indeed there.

The historic Salamanca University, founded in 1218, gained great prestige throughout the world early on, as a center for teaching and culture and has over the centuries, maintained that status. Today the University of Salamanca is renowned for the study of humanities and languages as well as law and economics.

Our backpacks were equipped for an overnight stay in this historic city when the train pulled into the Salamanca train station. The walk from the station was long, but as we passed through the Baroque-style Plaza Mayor or “Main Square” to get to the hotel, we had to stop and admire what is considered one of the most beautiful squares in Spain. Completed in 1755, it was used for bullfighting until the mid-19th century, but now, lined with restaurants, ice cream parlors, tourist shops, and jewelry stores, it is a popular gathering place for tourist, students, and locals alike.

Our hotel, Hosteria Sara, was clean, comfortable and reasonable. Well located in the center of the historic section of town, it was convenient to most of the major places of interest. 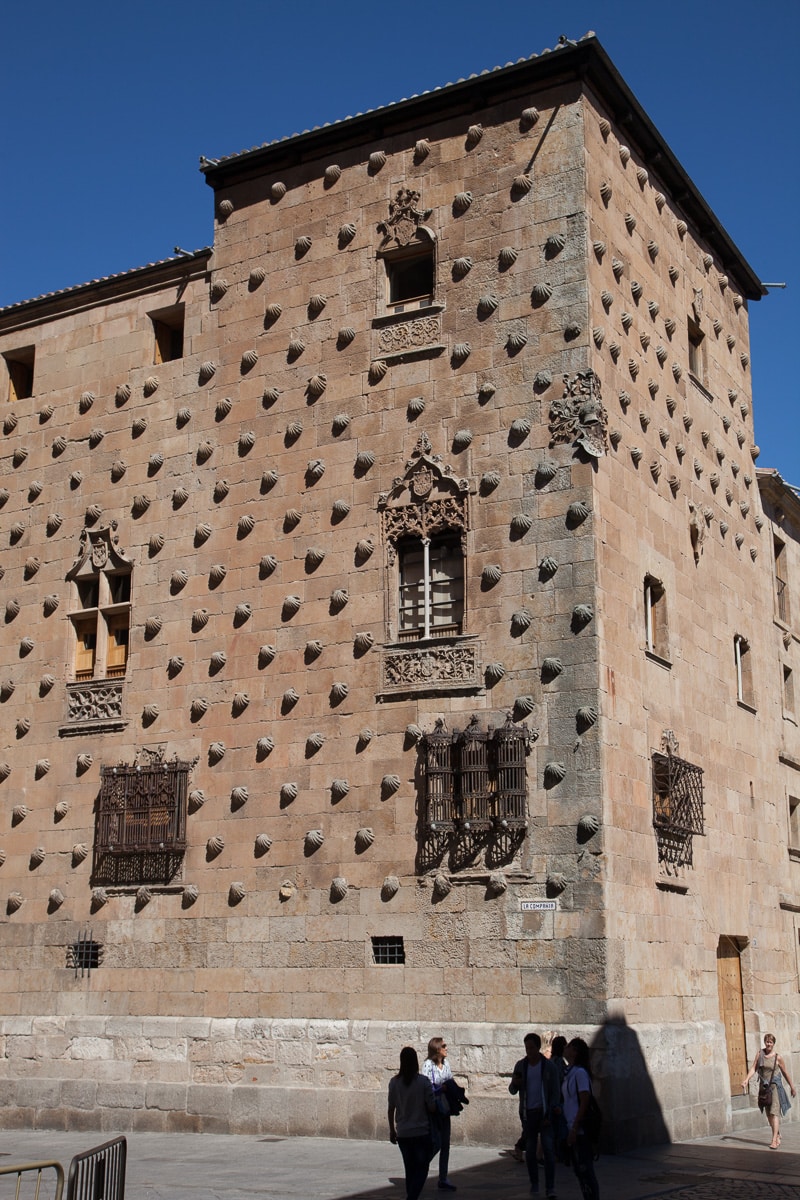 So after checking-in, we took off to explore the town. The day was beautiful and cool so we decided to put off visiting the interiors of any museums or churches until later when the forecast was for warmer temperatures.

As we wandered, we came upon the Casa de las Conchas, a building currently housing a public library. It was built between 1493 and 1517 by Rodrigo Arias de Maldonado, a knight of the Order of Santiago de Compostela and a professor in the University of Salamanca. One of its most unusual features is the façade, decorated with more than 300 shells, symbol of the order of Santiago, but part of its real charm was the courtyard inside of the structure.

Moving on we strolled the exterior of the cathedral(s). There are two cathedrals in Salamanca, the Old Cathedral, of the 12th century in the Romanesque style, and the New Cathedral, much larger, built in the 16th century of Gothic style and completed in the 18th century. The architecturally historic features of both structures are fascinating. We took more than a couple of hours to explore these amazing buildings and discovered treasures at every turn. Outside, the place where they both join is known as Patio Chico and is one of the more charming corners of the city. 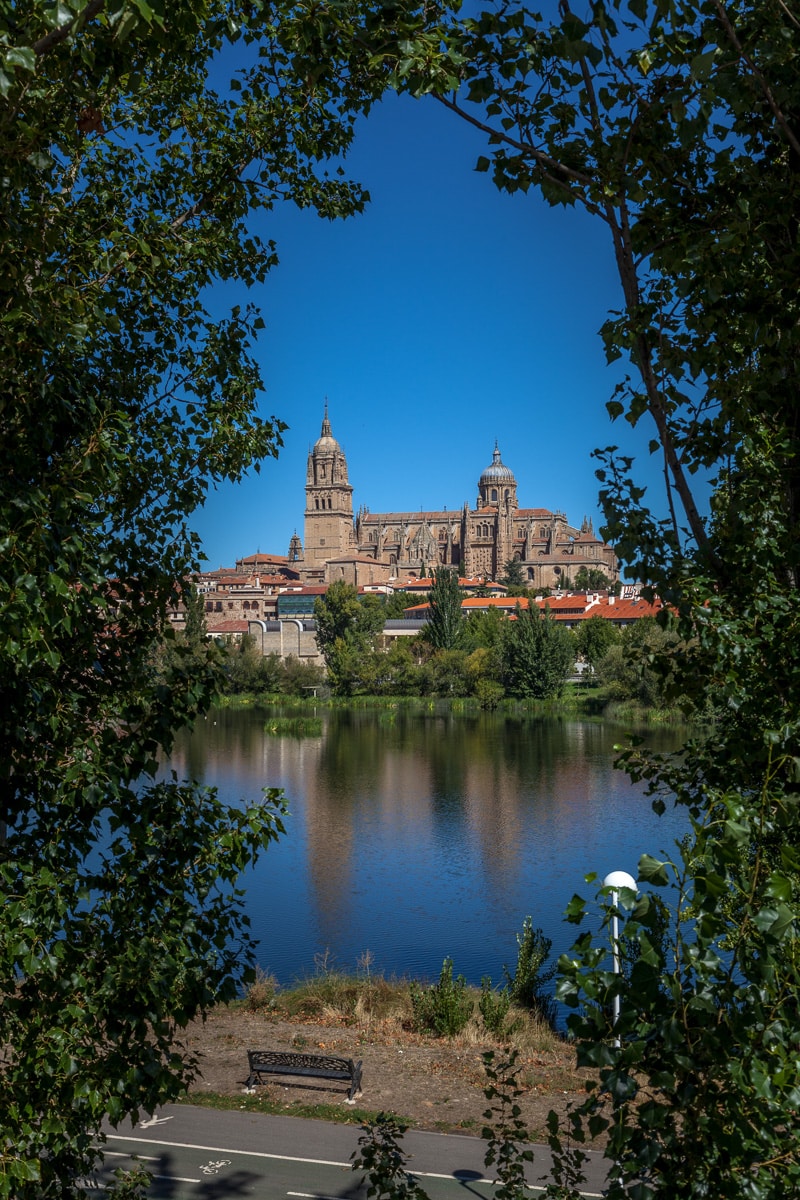 Scouting locations for views of the cathedral, we crossed the Rio Tormes over a modern bridge (1913), and we could see the old Roman bridge not too far in the distance. Salamanca lay on a Roman road, known as the Vía de la Plata, and the ancient bridge dating from the 1st century,was a part of this road. Though no longer carrying vehicular traffic, it is a beautiful place to stroll in the evening when it is lit up, and provides a marvelous view of the cathedral glowing in the night sky.

After a bit more exploring some of the sights that Salamanca has to offer, we had a good lunch before heading off to see some more. Later, we stopped in the Plaza de la Libertad at one of the sidewalk cafes to have a beverage as the sun began to drop behind the buildings. 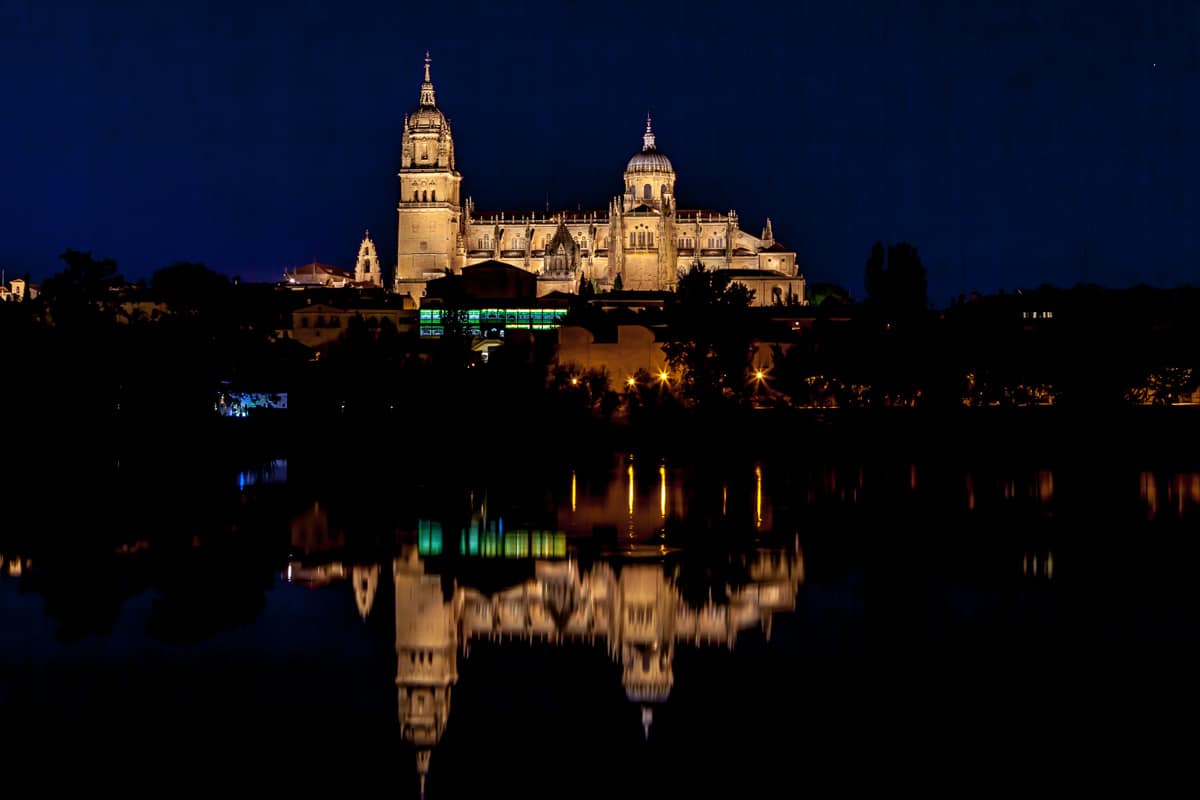 The goal for the evening was to do a little nocturnal photography. It was a beautiful evening and I was able to get some good images of the city wearing its nightlights.

Later, we returned to Plaza de la Libertad to have a glass of wine and tapas at another one of the small places that line the square. The evening was perfect, and after a couple of glasses of good wine and two or three tapas, we were ready to turn in. 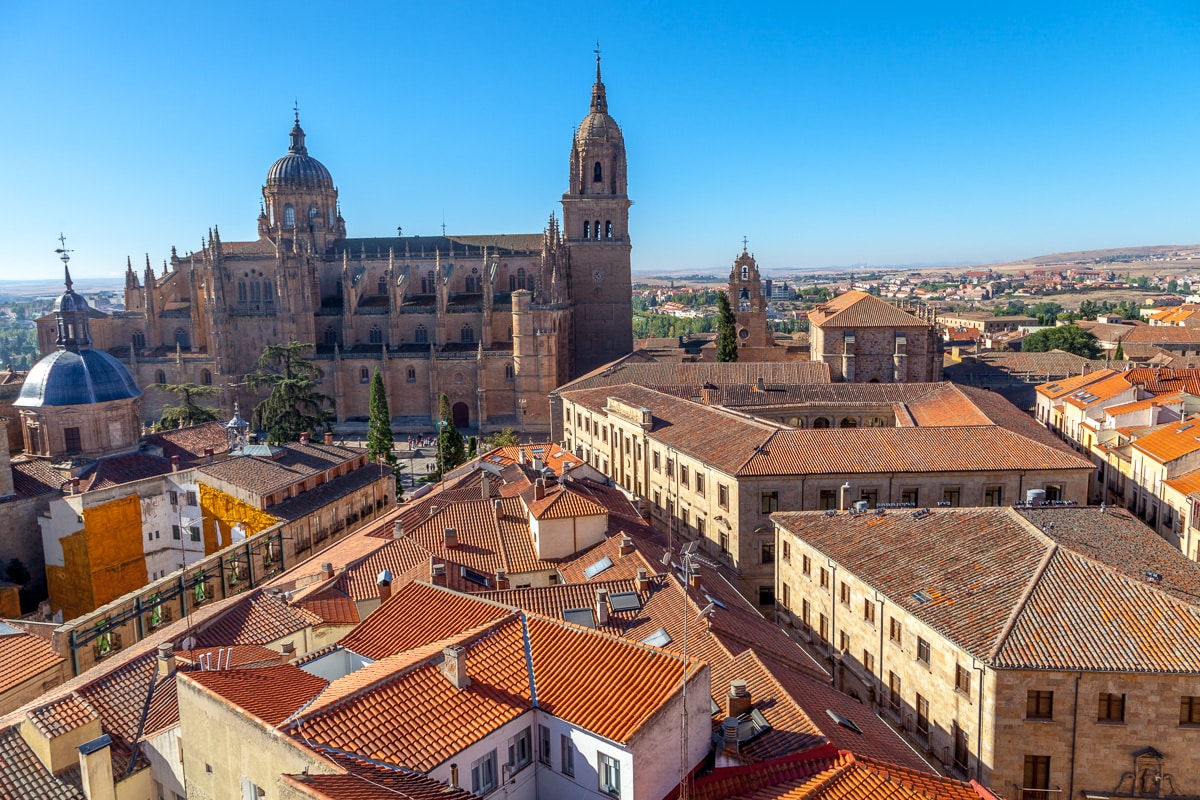 The next day came early enough and we wanted to get an early start seeing more of this wonderful city. After a typical Spanish breakfast of a café con leche and churros and some other pastry we headed to climb the towers of the Colegio Real de la Compañía de Jesús, and after a long climb up the stairs, we emerged to see an amazing view over the city. Walking between the two towers, and then up a spiral staircase in each tower higher still to where the bells hung. 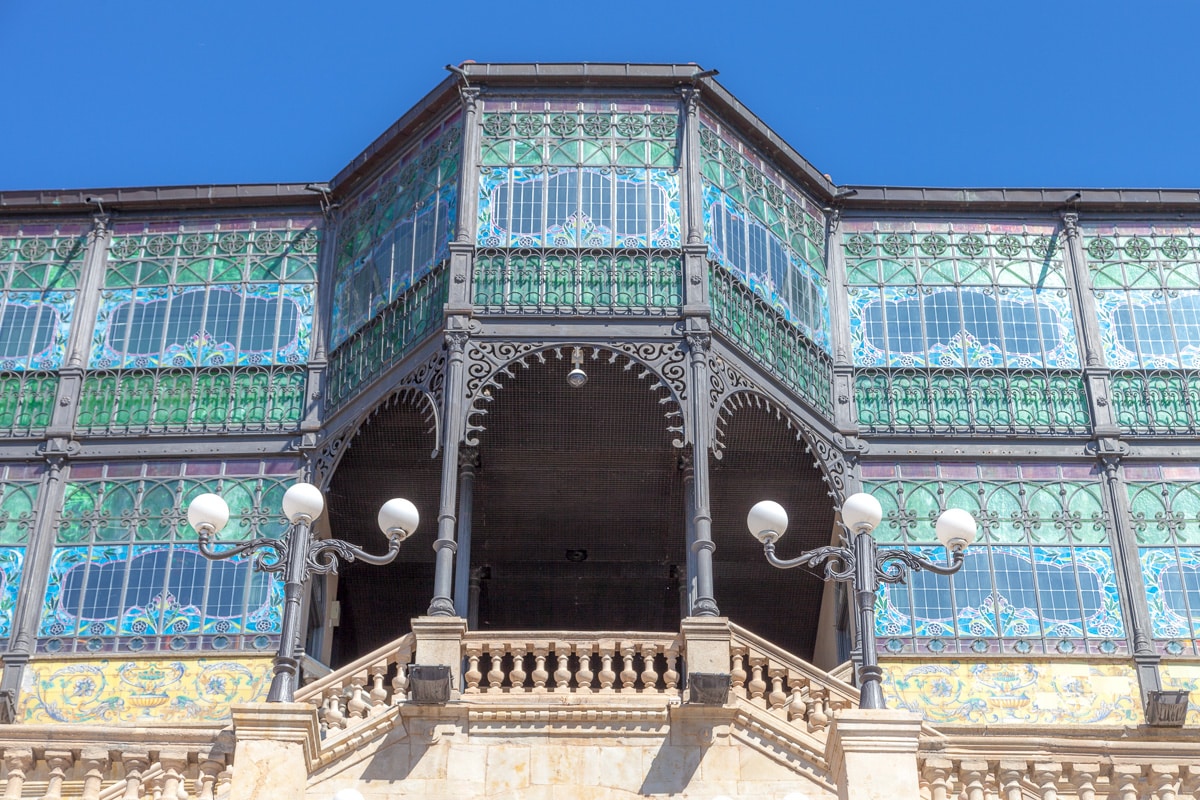 Next, we visited the Casa Lis, an Art Nouveau palace of 1905 with iron façade that was built as a home incorporating some of the old city walls. This building, a spectacular structure in itself houses the Museo Art Nouveau y Art Déco or the Art Nouveau and Art Deco Museum, a museum of decorative arts from the last decades of the nineteenth century until the Second World War. Everything from paintings and sculpture, to jewelry and books, to pottery and glass from the two artistic periods is displayed in the nineteen collections on its three floors.

Afterwards we strolled about the town some more and wound up walking past an 1893 statue of Cristobal Colón (Christopher Columbus) celebrating the discovery of America. Further along we came upon La Salina Palace, a 16th century Renaissance building on a site that was used to store salt. The decorations around the courtyard are fascinating and somewhat macabre. 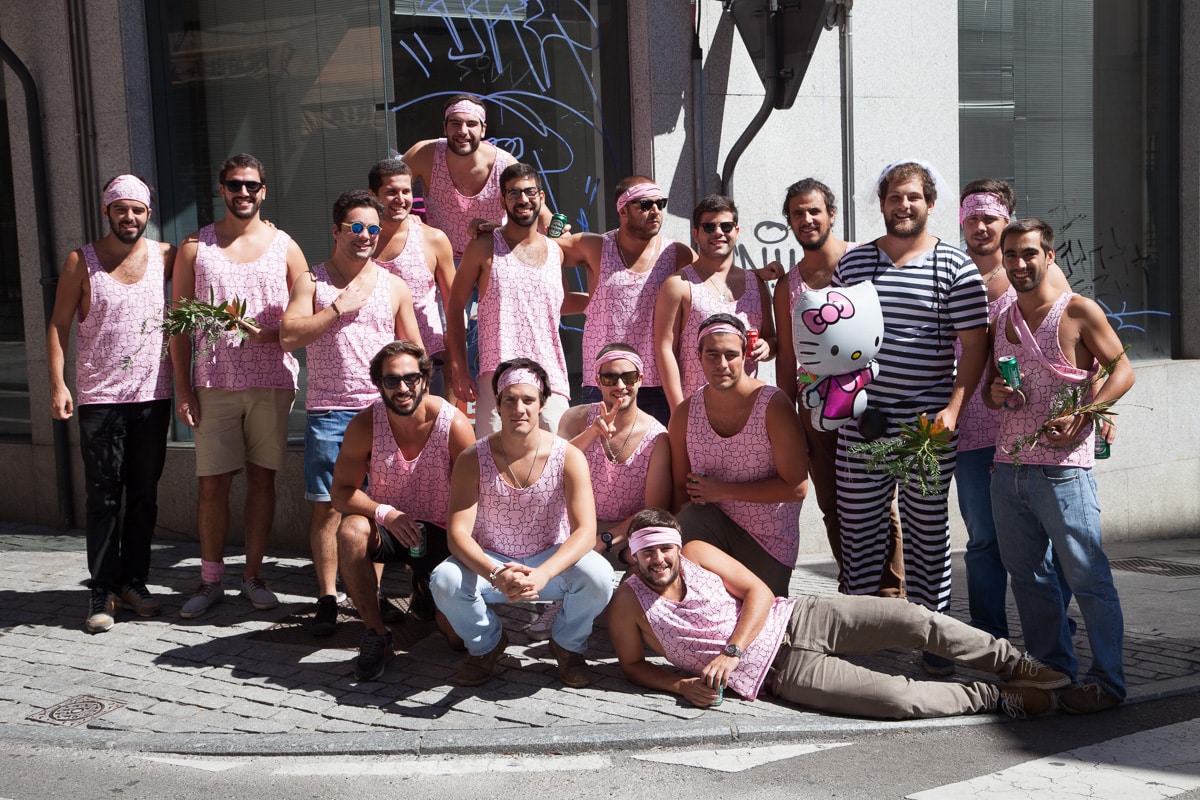 As we left the Salina Palace we came across a group of about 17 young men all wearing pink t-shirts, except one who was wearing stripped prison garb and carrying a “Hello Kitty” pillow. As it was explained to us in France, and apparently it is a similar custom in Spain, the weekend or so before the wedding, the male friends of the groom or girlfriends of the bride get together during the day, dressed in some manner of costume. The groom-to-be (or bride-to-be) is dressed in something different. We often saw tiaras and butterfly wings and/or tutus on the brides-to-be in France and another time we saw the same costume on a groom-to-be as well.

The participants roam about as a group and the spouse-to-be has to perform various innocent but silly tasks in front of strangers. In our case, the groom-to-be had to single out women and sing a song to them in order for his friends to buy drinks or lunch. After a bit of friendly banter, Jeannie relented and as I took pictures she was serenaded by a young Spanish man holding a Hello Kitty pillow.

It was nearing the traditional lunch hour, so we decided to head back to Plaza de la Libertad to check out some of the cafés and bars we had seen earlier. One of the bars was named “Florida,” so we simply had to go in if for nothing else than a beer or vermut (vermouth). 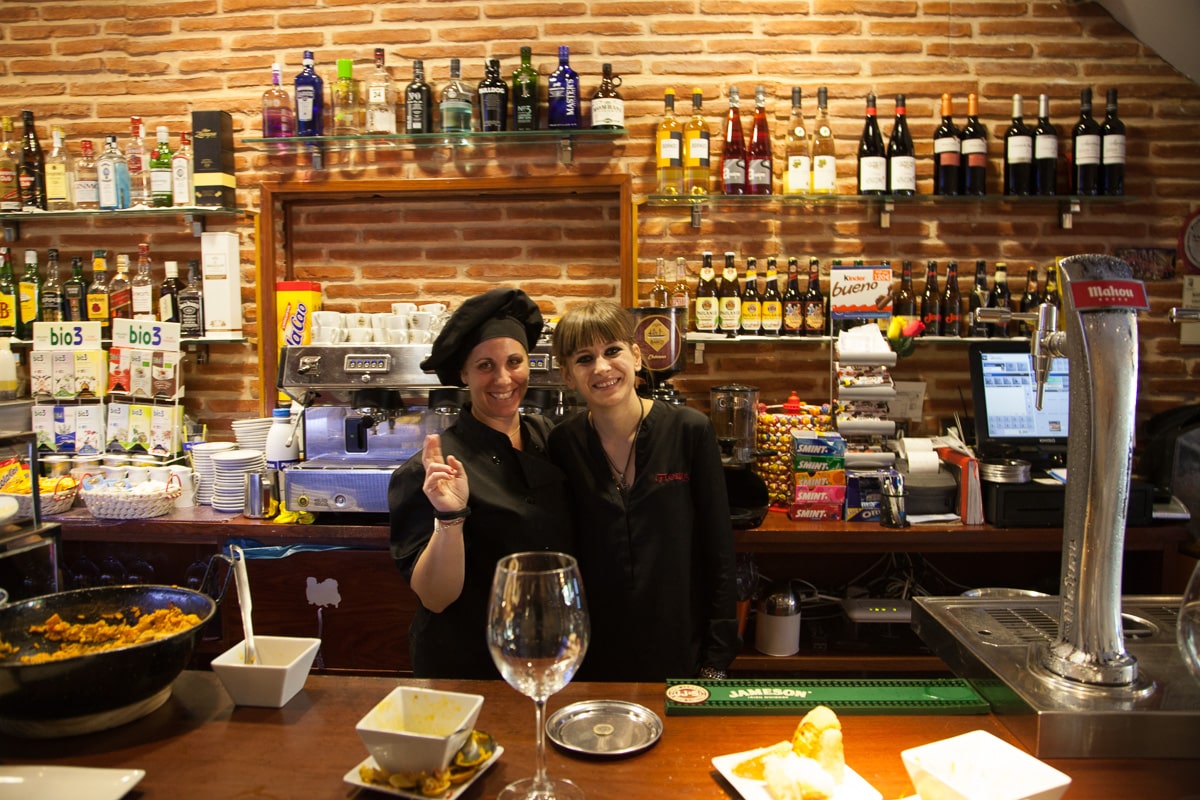 As we entered the small establishment, most of the tables were taken, and a number of men in period costumes (musicians on a break) were standing about having a beer. We made our way to the bar and found a couple of stools, and I inquired of the waitress, “¿Es esta Florida?” and laughing, proceeded to show her my Florida driver’s license. See, “Yo soy de la Florida!” “I am from Florida!

Luckily there was just enough English spoken that the humor was understood and all had a good laugh, including some of the other patrons at the bar. We were served our beers and some olives, and were then asked if we would like some of their paella, the day’s special tapa. Of course we said yes, and were served a good portion of hot homemade paella filled with a sumptuous variety of seafood. It was, indeed, the best paella we had tasted since we had been in Spain. We took our time enjoying the food, drink, and the ambience. Then as needed to be moving on, we bid a farewell to Florida and our new acquaintances.

One last stop we wanted to make before heading to the train station was a small garden that, we were told, had a wonderful view of the cathedral over the old city walls. It was also a quiet place to relax from all the bustle of the city and its crowds before our departure.

Indeed, we were invigorated for our trek back to the estación, and as we re-entered the crowded streets, we again absorbed the ambiance of this special city.