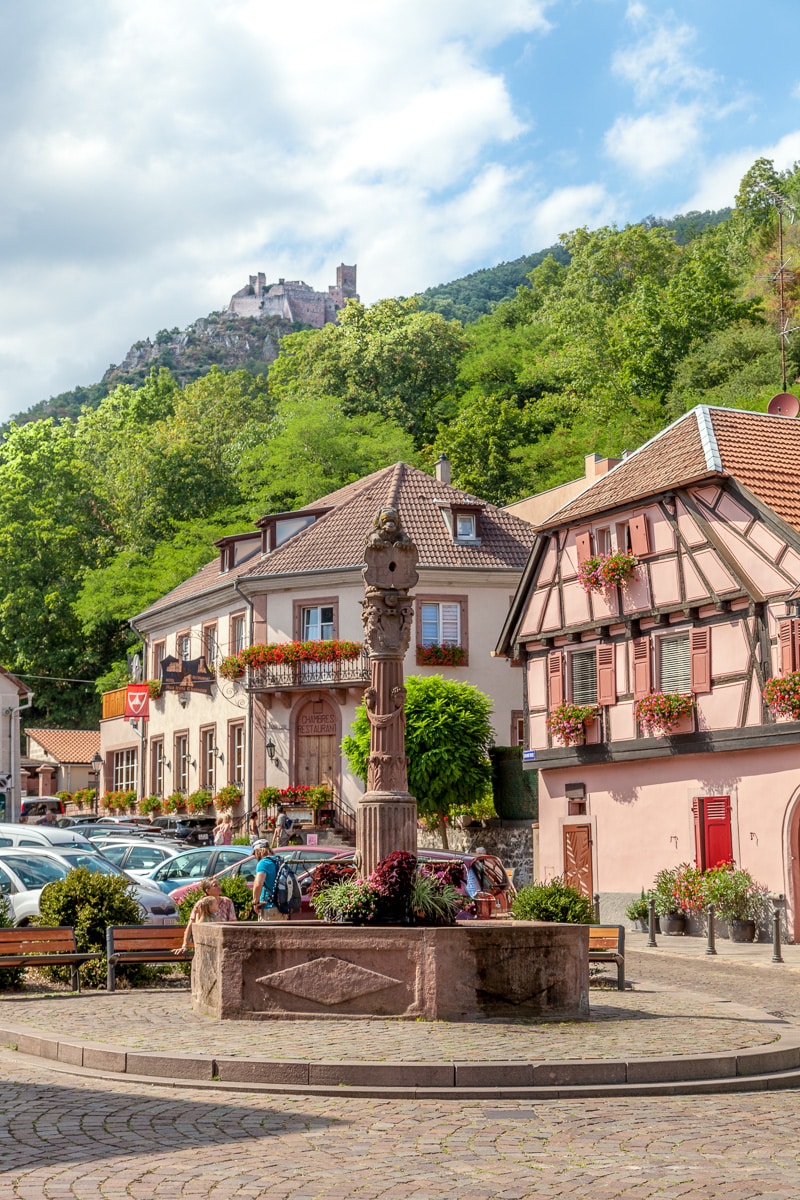 Our return to Ribeauvillé had several goals, all of which had to do with being outside. The weather forecast was calling for clear skies and comfortable temperatures. So, we packed our backpacks for an overnight away.

After the relatively short train ride to Sélestat, we boarded a bus for Ribeauvillé. We had travelled this route before, so we were in somewhat familiar territory.

The first order of business was to drop some of our gear at our hotel, Le Ménestrel, about a 10-15 minute walk outside of town. It was still early, so we expected that we would not be able to check-in, and would leave our things in the office. But when we arrived, our room was ready so we freshened up, ditched the unnecessary things and took off back to town. 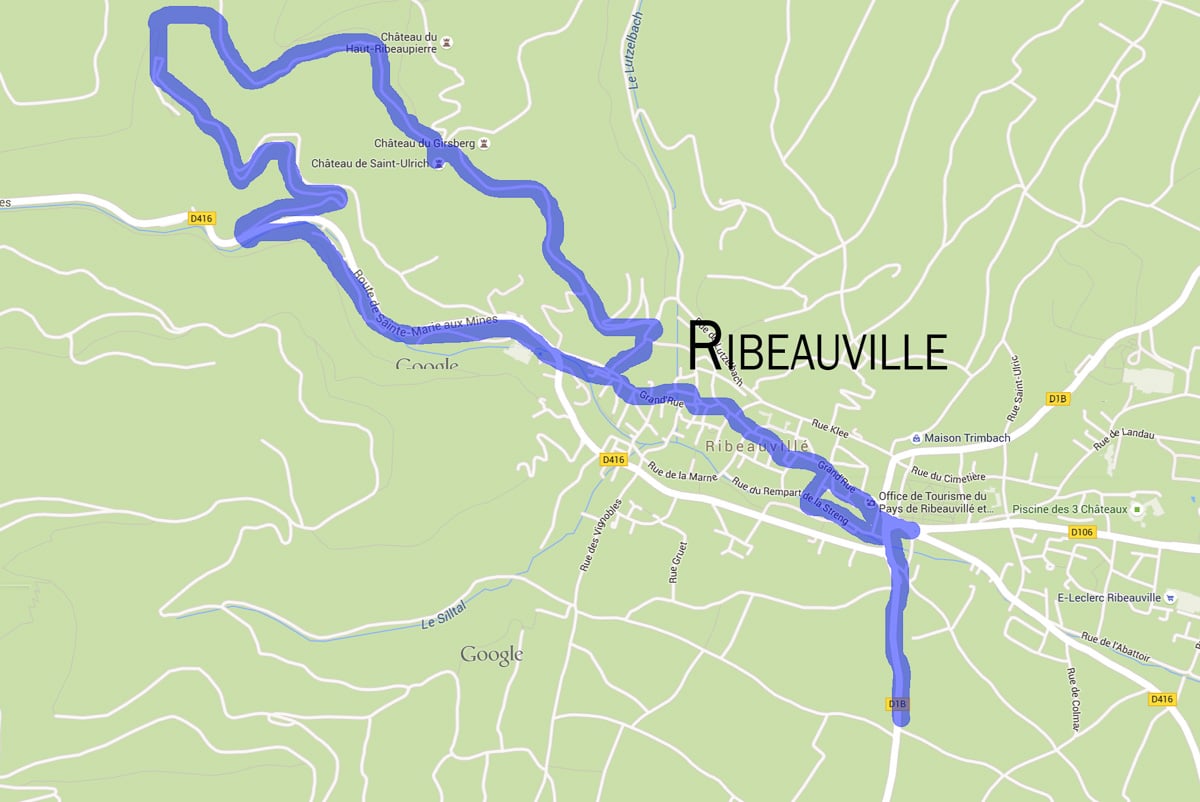 When we had previously been in Ribeauvillé, I was fascinated by the view of the ruins of Château de Saint-Ulrich, a 13th-century castle that looks out over the town from a high rocky outcrop. The ruins are visible in the distance when looking down many of the town’s streets, a reminder of the need for such defenses during medieval times.

Indeed, Château de Saint-Ulrich is one of many châteaux or castles situated high on mountains in the area, we had visited Château du Haut-Koenigsbourg earlier. There are three castles here at Ribeauvillé – Saint-Ulrich, the Ribeaupierre and the Girsberg, and though it is possible to visit all three in one hike, we set our sights on Saint-Ulrich. The trail was steep and rocky as we left Ribeauvillé. We quickly found ourselves high above the town looking out over forests, medieval walls, tiled roofs, and off in the distance other villages nestled in the vineyards that make the region famous. 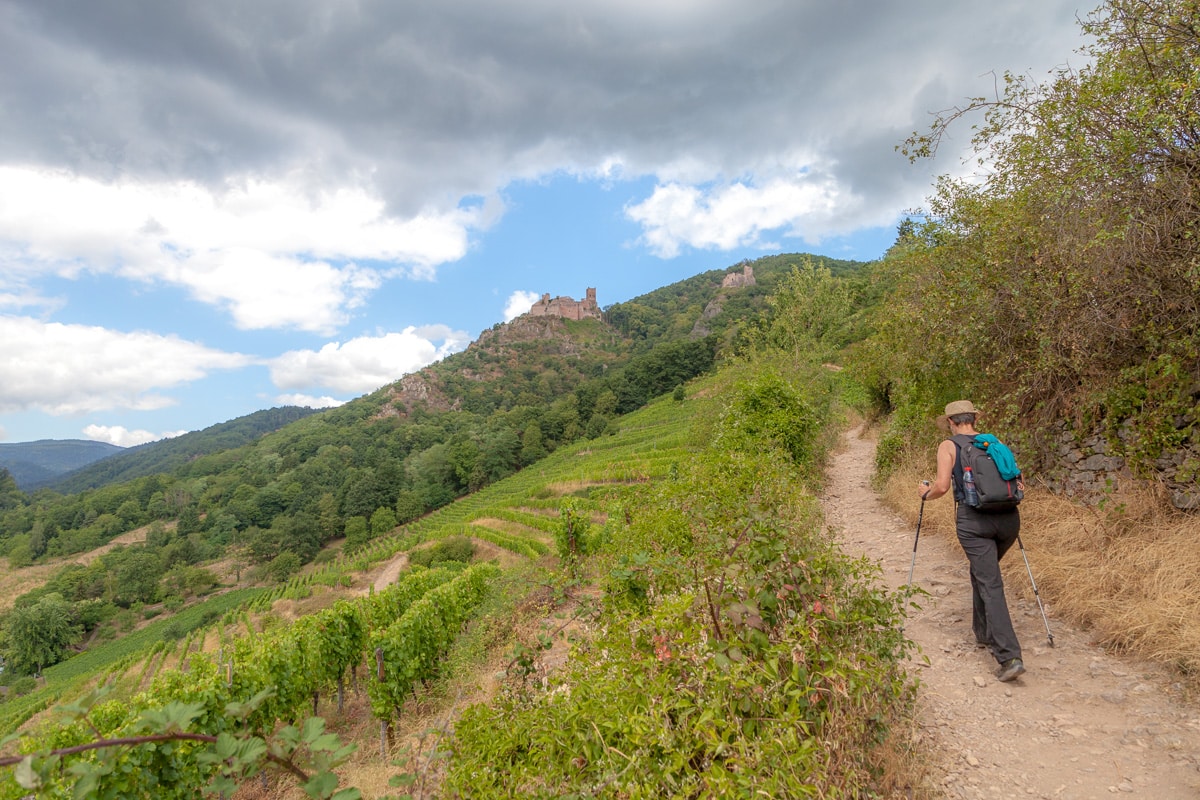 Each time the trail turned we were given a new view of the château high above. It was always necessary to stop before looking up toward the castle as the footing was very rocky, uneven, and steep. The thoughts of an enemy advancing upon this intimidating stronghold must have surely been filled with dread. We climbed higher and higher, and when we reached the base of the fortress we stopped for a break of fresh bread, cheese and smoked pork tenderloin before storming the castle. 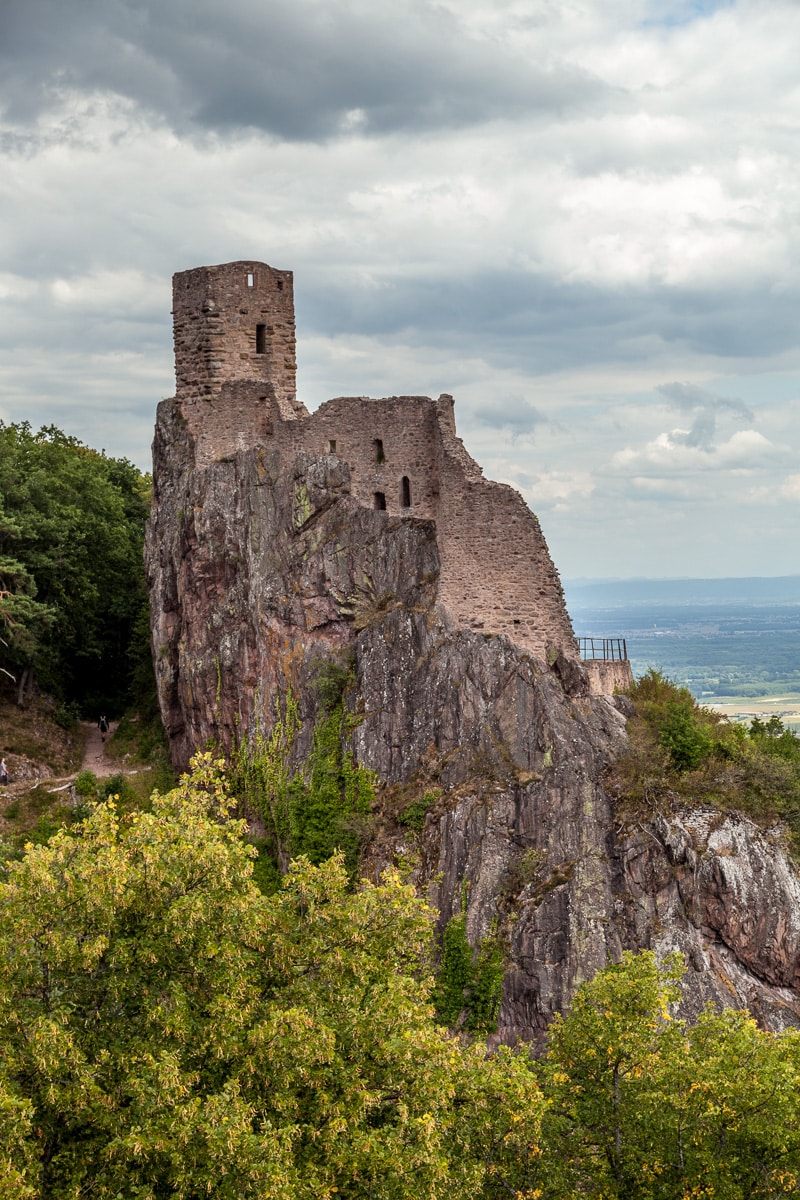 Built into a rocky crag of the mountain, Château de Saint-Ulrich was a wonderful example of the military architecture of Alsace in the Middle Ages, including a 12th century keep, a 13th century salle des chevaliers (knights’ hall) with nine beautiful windows in the Romanesque style, and in 1435, the chapel dedicated to Saint Ulrich, Bishop of Augsburg, was built. Commanding vast views over the surrounding countryside, including the Château du Girsberg on the neighboring peak, we took our time admiring the construction that has survived so many centuries.

We then departed the Château and began our trek to Monastère Notre-Dame de Dusenbach, a place of pilgrimage since the thirteenth century that has been destroyed and rebuilt several times over the centuries. Nestled in a small valley deep in the forest, we lingered in this quiet, peaceful place before descending to the small stream that we followed back to Ribeauvillé. 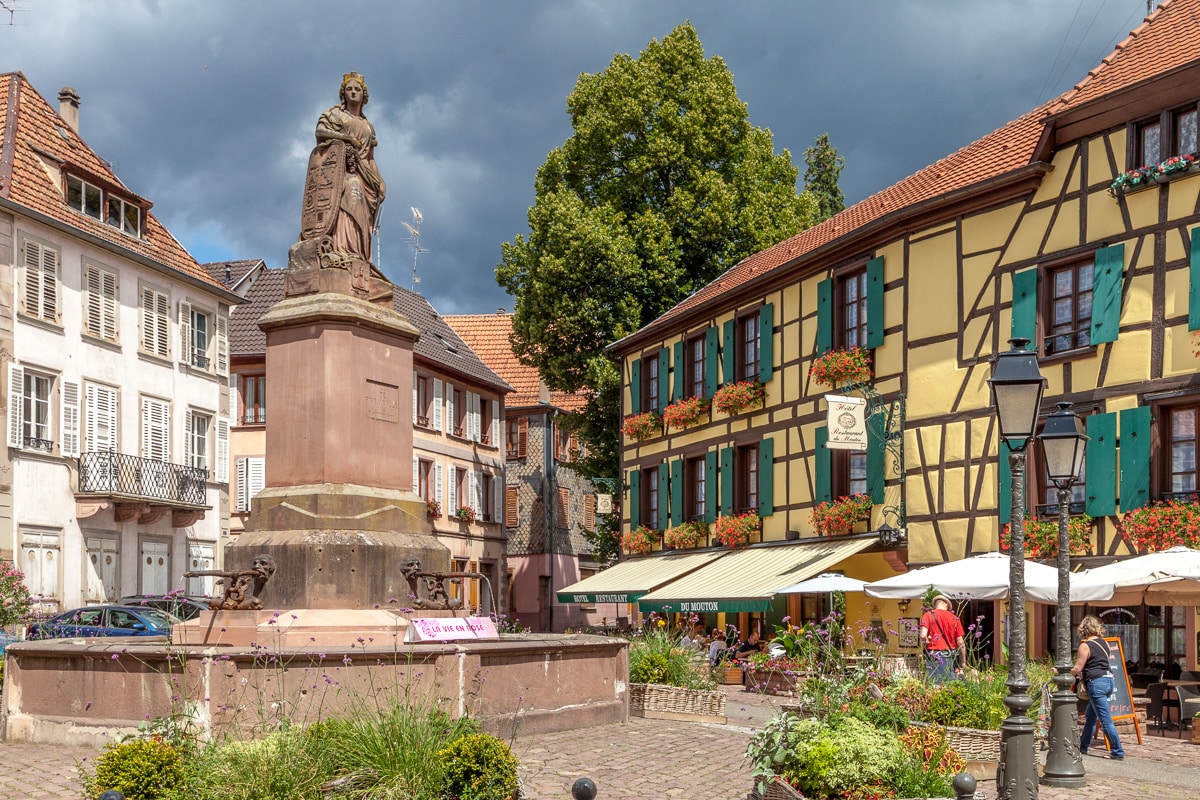 Arriving back at the far end of Ribeauvillé, we stopped briefly at a fountain, and met a young couple from the Netherlands and had a delightful conversation. As we continued back towards our hotel, still a 40 minute walk away, we stopped for a cold drink at a cafe where we could rest our weary legs in the shade of an umbrella as we watched the throngs of tourists streaming by.

After returning to the hotel, we cleaned up and had a delicious Alsatian dinner at Restaurant D’Baecka Ofa Stub back in town. I have never eaten such hearty food. I had choucroute (sauerkraut) with pork knuckle while Jeannie had basically mashed-potatoes, cheese, and bacon. It was an incredible meal that made us glad that we had hiked for many hours in the mountains.

The cool, late night walk back to the hotel was delightful, and since we had another big day of hiking ahead of us, we turned in and slept the sleep of stuffed hikers. 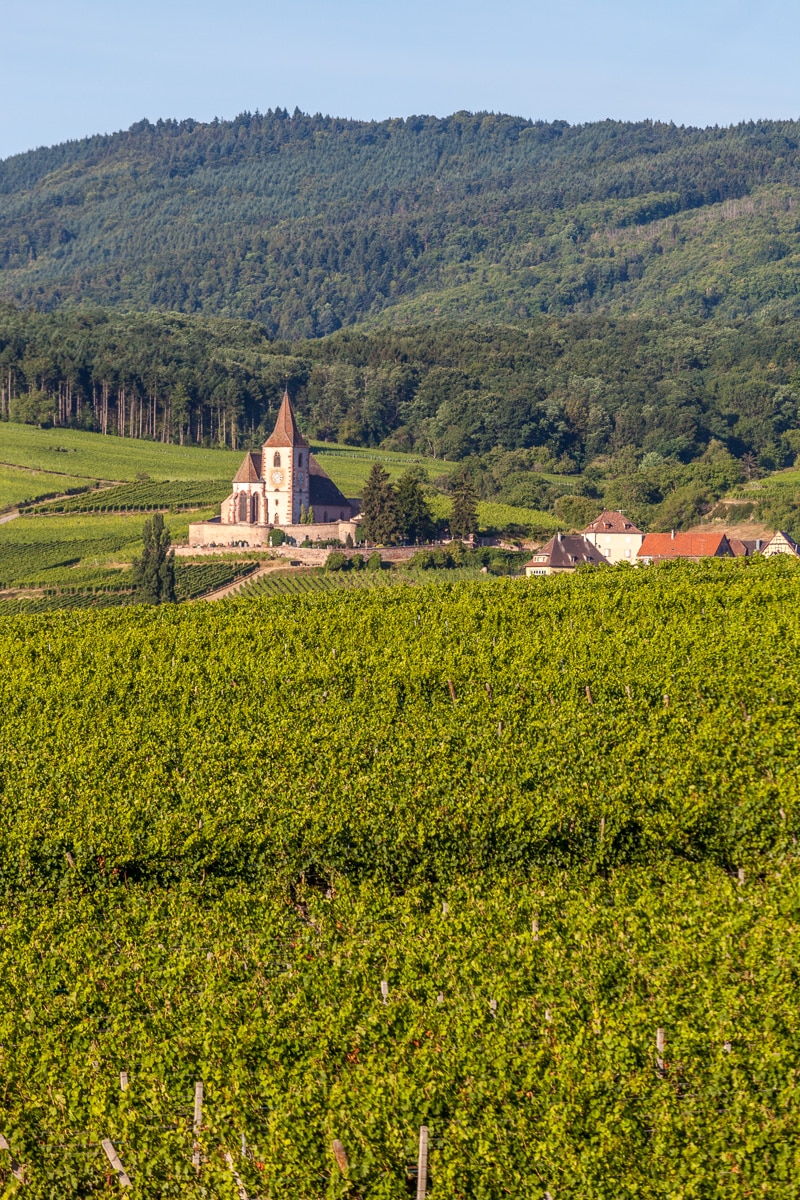 The sun rises early in the summer and as I looked out over the vineyards outside our window, the sun was beginning to stream over the vines and forests and, in the distance, the small village of Hunawihr.

Breakfast was light, a croissant, yogurt, and cafe au lait, and then we checked-out with our gear on our backs for a long day’s circuit among the small vine villages. Our plan was to finish the 16 km (10 mi) walk back in Ribeauvillé, then return to Strasbourg via bus and train in the evening.

As we walked into Hunawihr, after just 2.3 km (<1.5 mi), we came across a gentleman putting a sign on a light post announcing a two-day festival. He spoke to us in French explaining that we should come and join in. Explaining that we would not be in town, we expressed our regrets and thanked him for the invitation (at least that is what we think we communicated!) 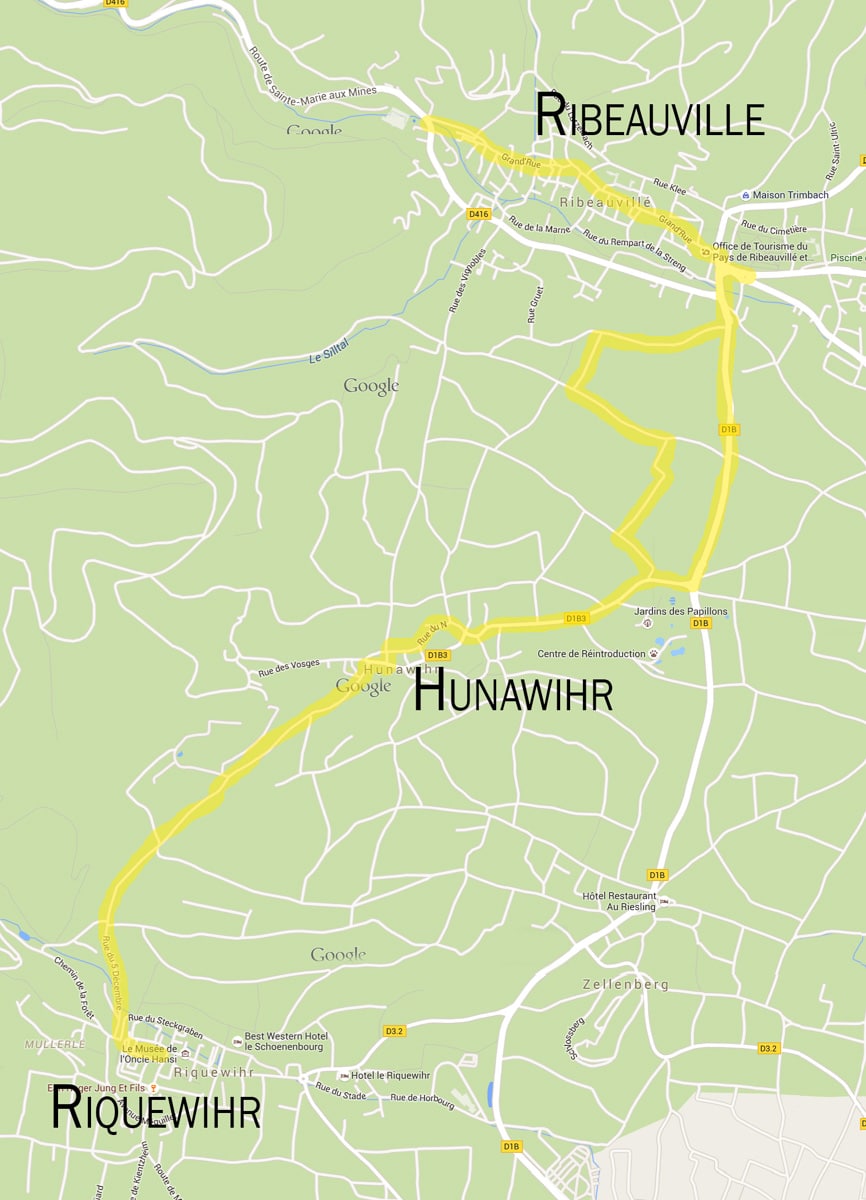 Once in Hunawihr, whose name is derived from “Sainte Hunna”, the patron saint of washerwomen, we began to think- why not stay in the area for one more night. We were in no pressure to get back and the weather and surroundings were beautiful. So as we walked through the tiny village (pop. 700), we stopped at the only inn we had seen and inquired about a room for the evening. Unfortunately, there were none available. So we decided to walk on to Riquewihr, another 2.3 km (<1.5 mi) away.

The town of Riquewihr is larger (pop. ~1300), and has a tourist information office where we stopped for a map, and inquired about a place to stay. Luckily there was a small B&B within the city walls that had a room, so arrangements were made and we headed over to drop our excess things for an afternoon of walking.

We were greeted warmly at the door by our host Bridgette (“not Bridgette Bardot”) who showed us to our room on the third floor of the building that dated from the mid-1500’s. The beautiful wooden staircase and the dark wooden paneling and ceiling certainly had a feeling of centuries of use as we arrived at our comfortable room. The window looked out onto a street that looks today more or less as it must have in the 16th century. 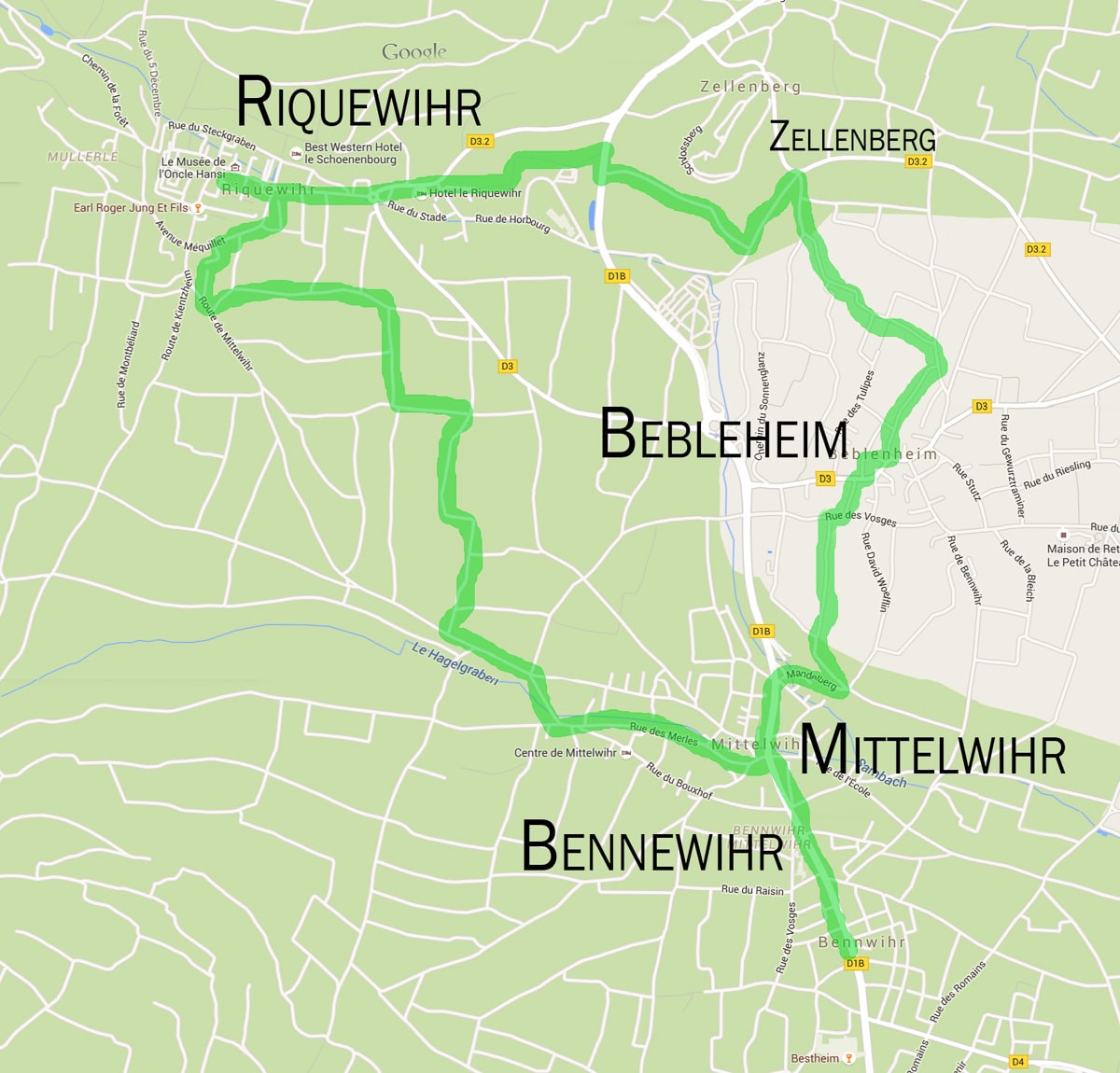 Heading out for our walk, we searched for some place to purchase something for a picnic, and found a small outdoor market where we bought some rustic bread, cheese, and jambon sec (kind of like proscuitto) to take along with some apricots on our journey.

The reasonably well-marked route led us down empty farm lanes and through vineyards that sprawled over the hills in every direction. In the distance we could see the three castles above Ribeauvillé – Saint-Ulrich, the Ribeaupierre and the Girsberg, and when we crested a hill we could also see the other villages that we would walk through over the next several hours – Mittelwihr, Bennwihr, Beblenheim, Zellenberg, before returning to Riquewihr. 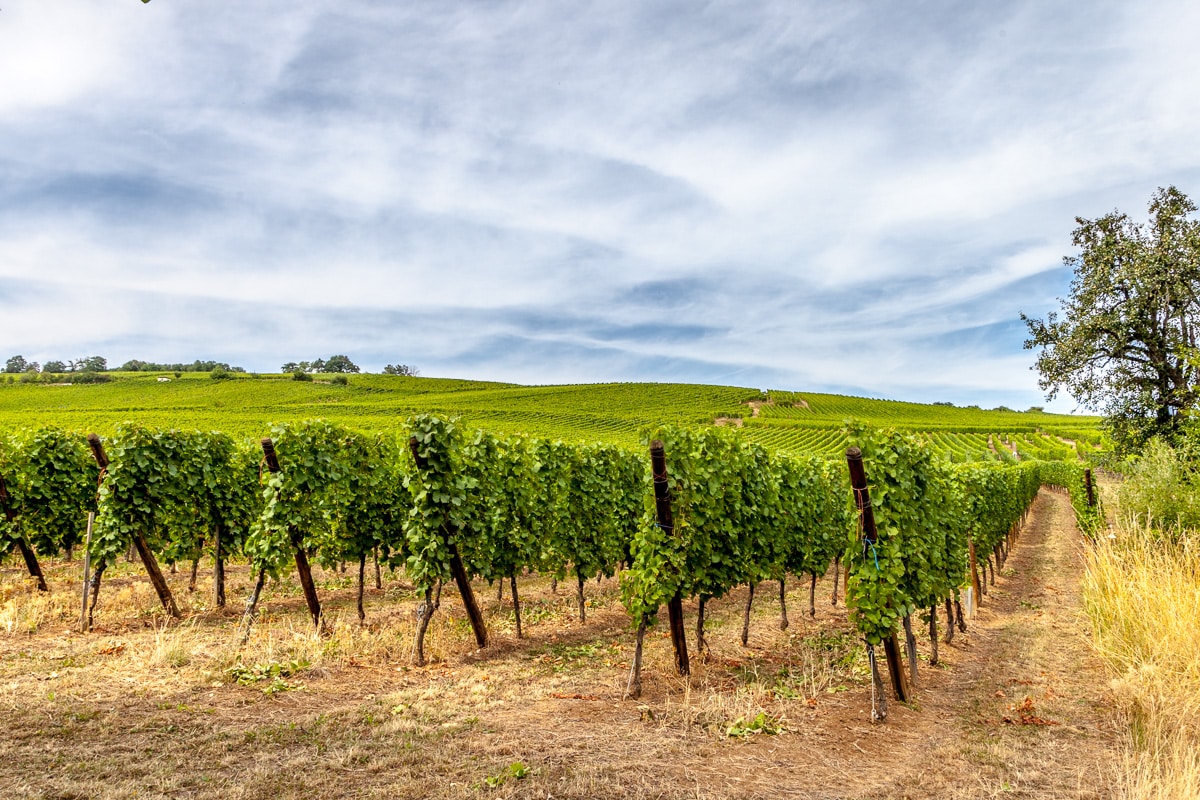 The route was entirely in the sun with very little shade, and the temperatures were quite a bit warmer than the previous day. We found a picnic table with a little shade, and ate our provisions and rested before completing the circuit.

It was nice to return to our room in the old town and rest before dinner. The open windows caught a breeze that was just cool enough to make it easy to close our eyes and appreciate having the extra time to explore this area and not have rush back to Strasbourg.

Dinner was at a quiet little restaurant where we again enjoyed good food and wine, next to an open window in a small Alsatian town. Tomorrow we would walk back to Ribeauvillé, and take some more time there, but tonight this small, medieval town was enchanted.