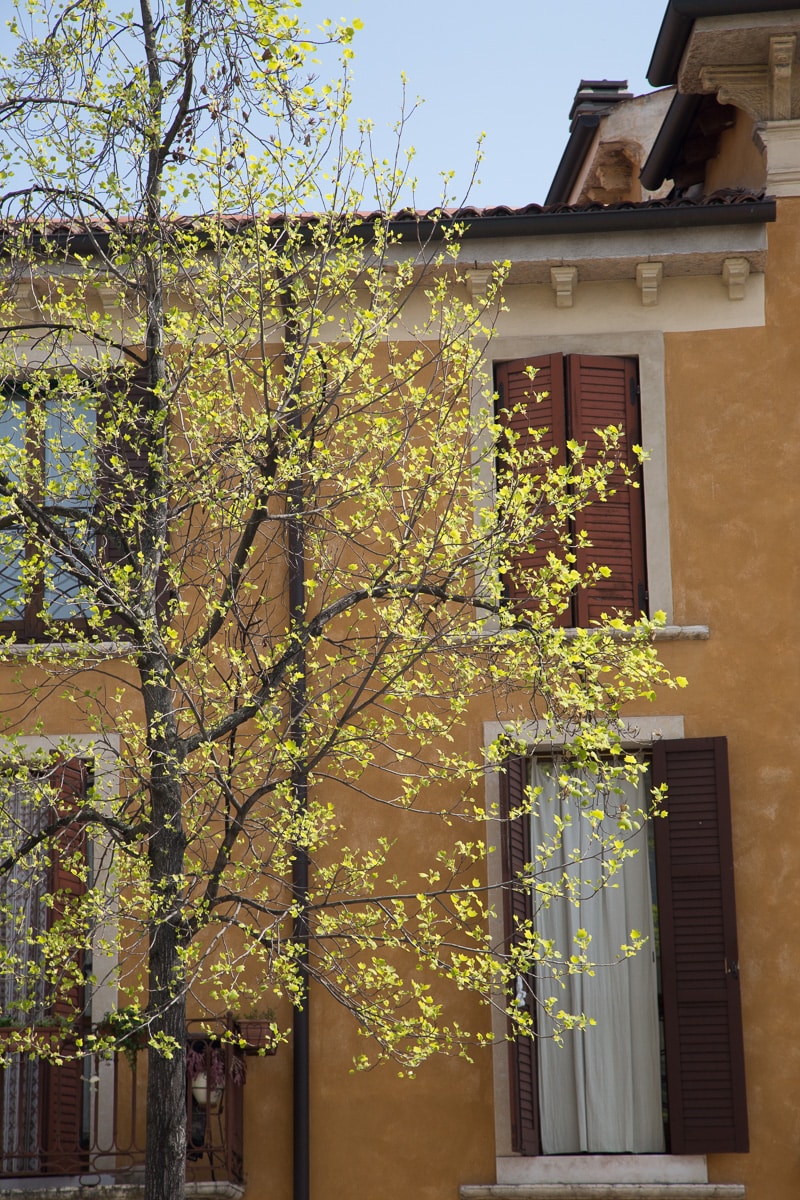 Primavera, or springtime, is without question, the best time to visit just about any place, and Italy is certainly no exception. As winter finally sputters out, the bare trees are just beginning to burst forth with their bright green foliage, the wildflowers are covering the ground with their carpet of color, and the birds fill the air with their cheerful songs. 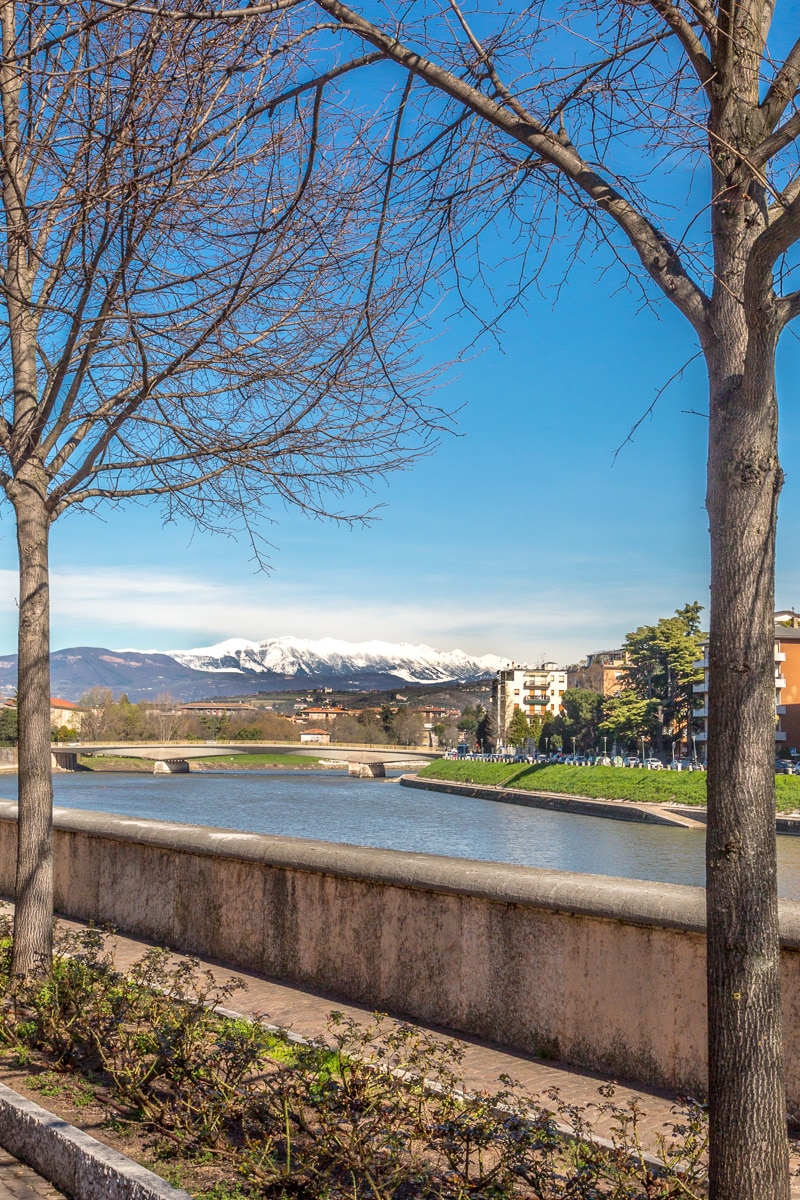 Not too far in the distance from Verona, we can see the snow-capped Italian Alps reminding us that there is still cold weather nearby. The Adige River, whose source is close to the borders with Austria and Switzerland, flows through Verona carrying meltwater to the Adriatic Sea.

Situated in north-eastern Italy’s Veneto region, Verona lies about half-way between Milan and Venice, less than 1.5 hours to either city by train, and only about two-hours north of Florence, also by train.

It is often said that Verona is underrated as an Italian destination despite its picturesque center of cobblestone streets lined with medieval buildings, well-preserved Roman sites and many beautiful churches. 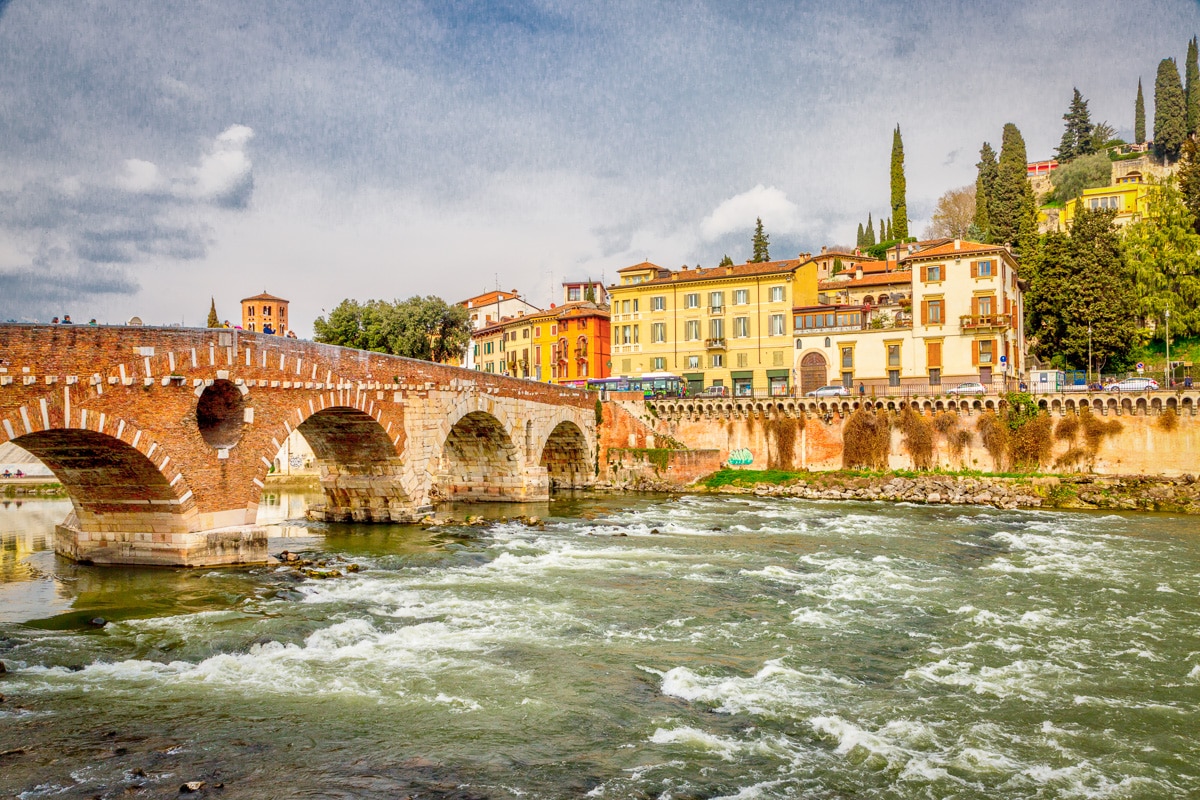 Everyone knows of Verona mostly by its association with Shakespeare’s play Romeo & Juliette, published in 1597, though it is unknown if Shakespeare ever visited Verona or Italy at all. The plot was borrowed from a tradition of tragic love stories dating back to antiquity. It was “… In fair Verona, where we lay our scene …” wrote Shakespeare in the prologue, thus providing this city with a tourist attraction that can be overwhelming at times.

Such was the case when we arrived Easter weekend. The city was packed with people, yet we still enjoyed diving into the chaos … for a little while.

Mostly, we stayed near our apartment on the south end of town not too far from the Porto Palio, a gate or portal of the former outer medieval walls of the city, built in the mid-1500s. Grocery shopping and simply wandering to get a feel for the surroundings occupied the majority of the weekend. 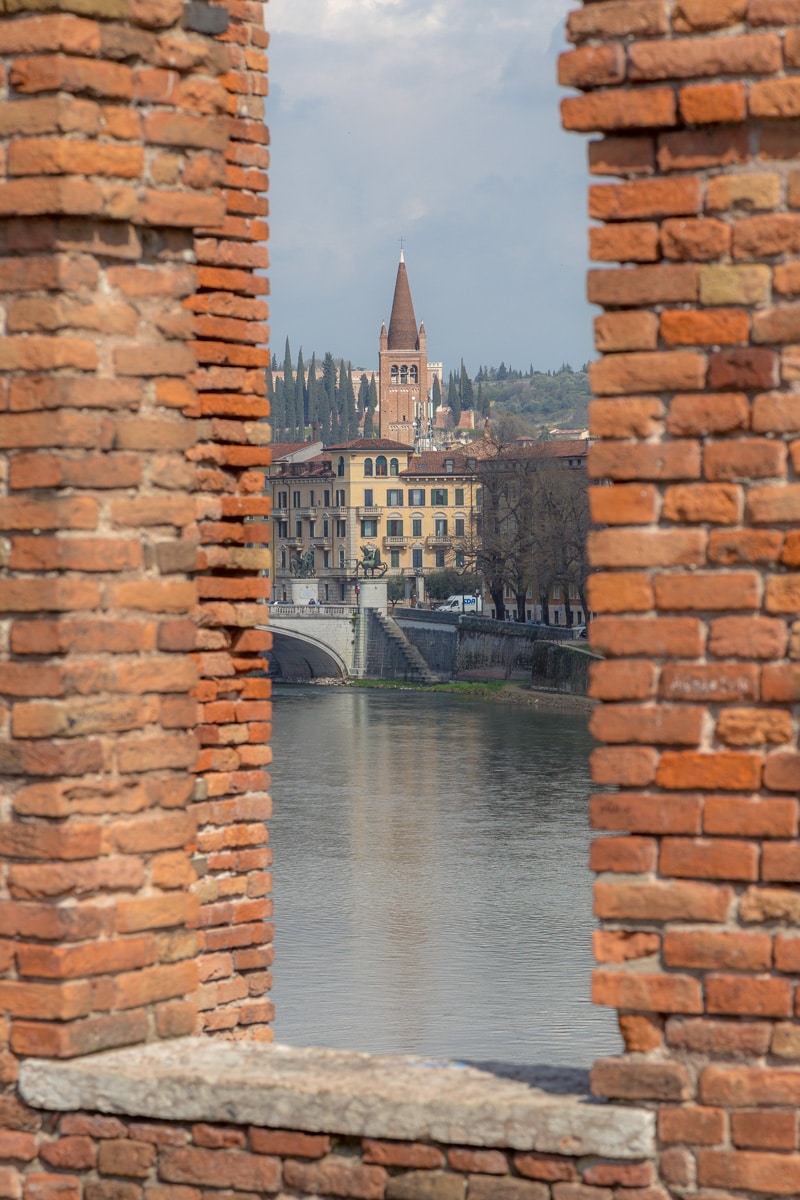 All was going smoothly until my tooth dictated that I see a dentist quickly. But with that little difficulty mostly resolved, we set out for some serious exploring, putting more than 8-12 km (5-8 miles) on our feet daily, mostly on cobble-stoned streets.

Walking through the streets of Verona is an experience of the senses as you pass by palaces, churches, bridges, and ancient stones that speak to an exceptional history.

The most significant phase in the early history of Verona encompasses the Romans. The oldest inscription found at Verona is from a milestone on the Via Postumia and dates to 148 BC. Preceded by the Raetia, Euganei and Etruscans, Verona became a Roman colony in 89 B.C. and its residents were given Roman citizenship in 49 B.C.  The city was significant because it was at the intersection of several important roads, as well as a strategic location on the Adige River. 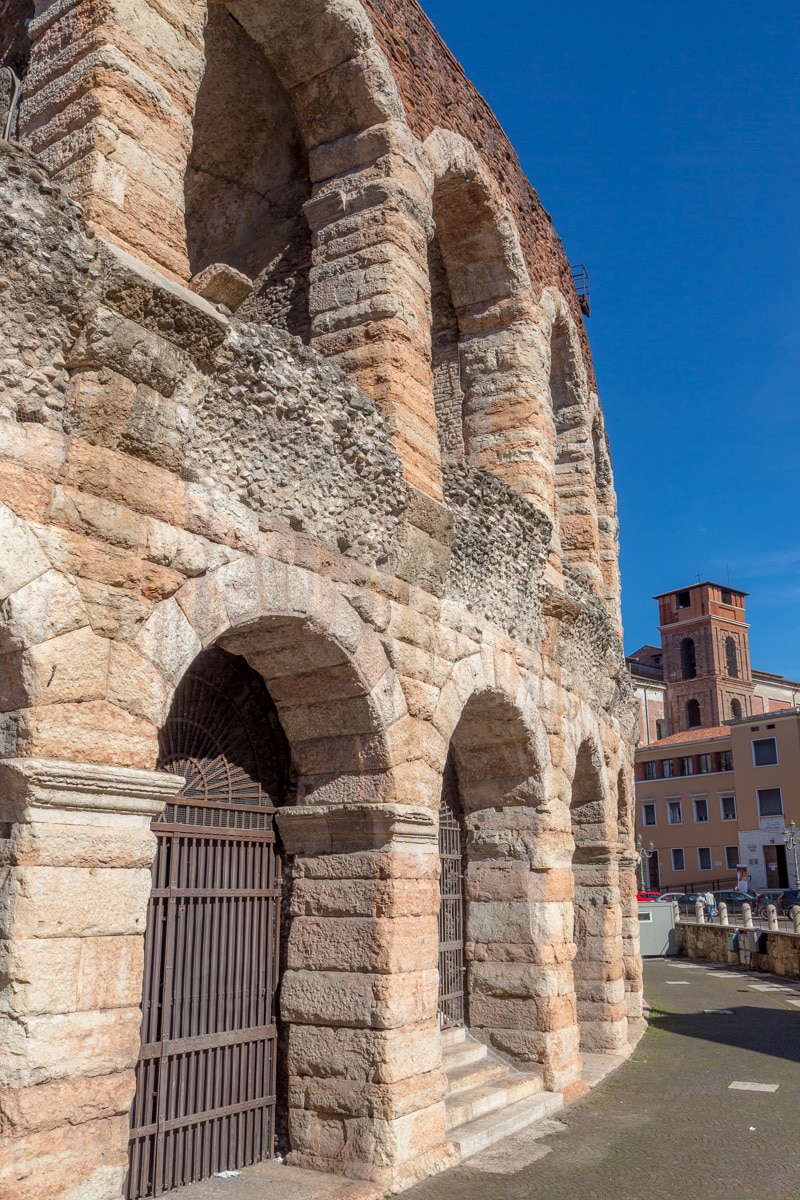 At the center of Verona is a mammoth, remarkably well-preserved 1st-century Roman amphitheater, the Arena. Located in the city’s largest piazza, the Piazza Bra, it measures 139 meters (456 ft) long and 110 meters (360 ft) wide, and could seat some 25,000 spectators in its 44 tiers of marble seats.

There are Roman monuments and artifacts scattered all around the city. What was once the city’s forum, Piazza delle Erbe, is still a gathering place filled with market stalls and cafés. Much of the old Roman city and its basalt-paved roads are still thought to be mostly intact though hidden from view about 1-6 m (3-19ft) below the surface. 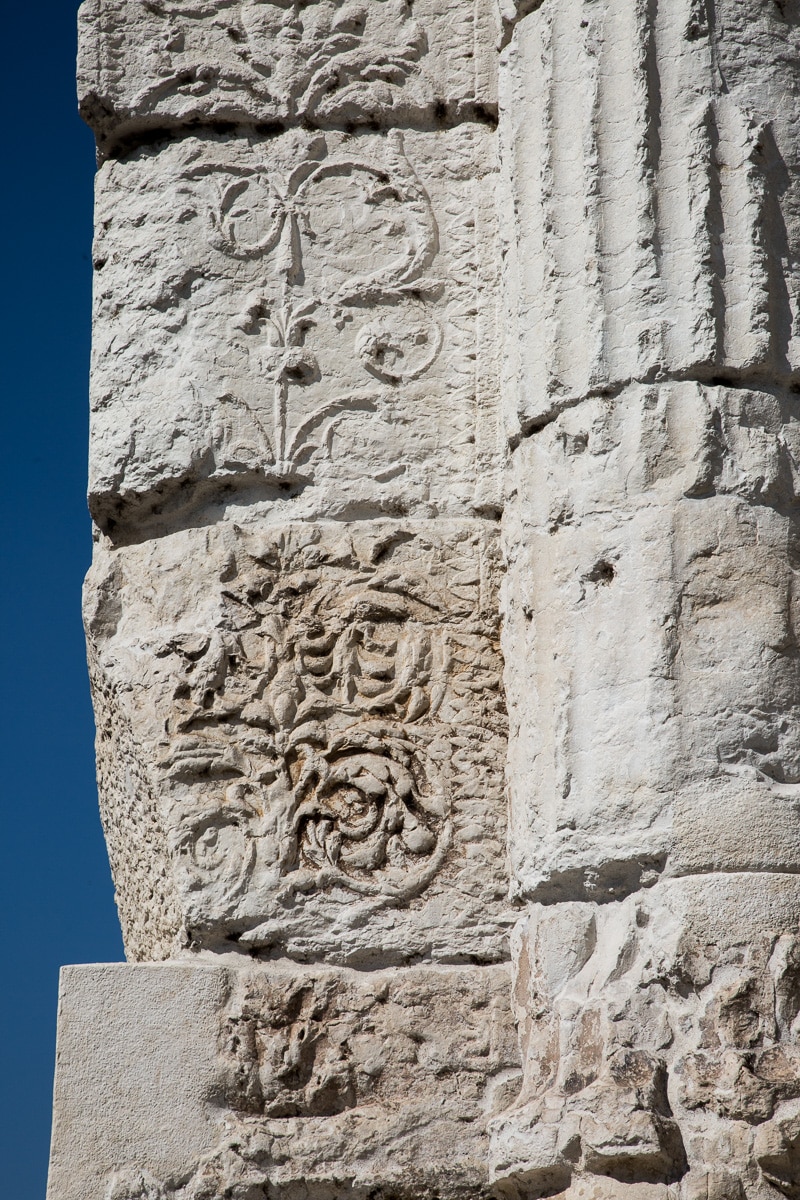 Besides the Arena, some of the more significant Roman monuments that can be seen include the Arco dei Gavi, the Theatre, the Borsari Gate, the Ponte Pietra, and others. Many of the Medieval and Renaissance constructions used existing Roman walls, foundations, or stones as the city grew, so it is possible to see pieces and parts of old Roman structures almost everywhere.

But the Romans were just the start of the tumultuous history of Verona; since after the Romans came the Visigoths, the Ostrogoths, then the Lombards, and Charlemagne, and so on and so on. But I won’t try and cover all that just some of the highlights as they become necessary.

Besides within the first week we took the train south for a day trip to the delightful city of Mantua (It: Mantova), but that is another story.