It has been over a year since we traveled abroad, and it was a very busy year at that. Jeannie is putting together a summary of the past five years of adventures, including what we have been up to when not overseas.

This adventure marks the beginning of our sixth year of slow travel, and it took us a while to decide where we would set up our home-away-from-home this time. After a good deal of research and a session of “Eenie, Meenie, Miney, Moe”, we decided on Portugal. Besides, we had never been there, and good reports abounded on the friendly people, the beautiful country, and of course, the food and wine.

So, with a developing plan we began our preparations. Nothing was difficult, but not having spent three months away in a while meant we needed to revisit and adjust our previous strategies. Also, as we were departing the first part of August, and would arrive in Portugal in 1) the middle of summer, and 2) at the height of tourist season.

The historical weather data for Portugal, and specifically Porto in the north, and Lisbon in the south, gave us hope that the cool Atlantic waters would help us avoid the blistering heat that was plaguing much of the rest of Europe. However, since we would be there until the end of October the temperatures by then could be cooler than we are prepared for; the bright side of that being the autumn colors of the vineyards on the slopes along the Douro River, famous for its Port wines.

Then too, we should be there long enough to outlast the tourist hoards. 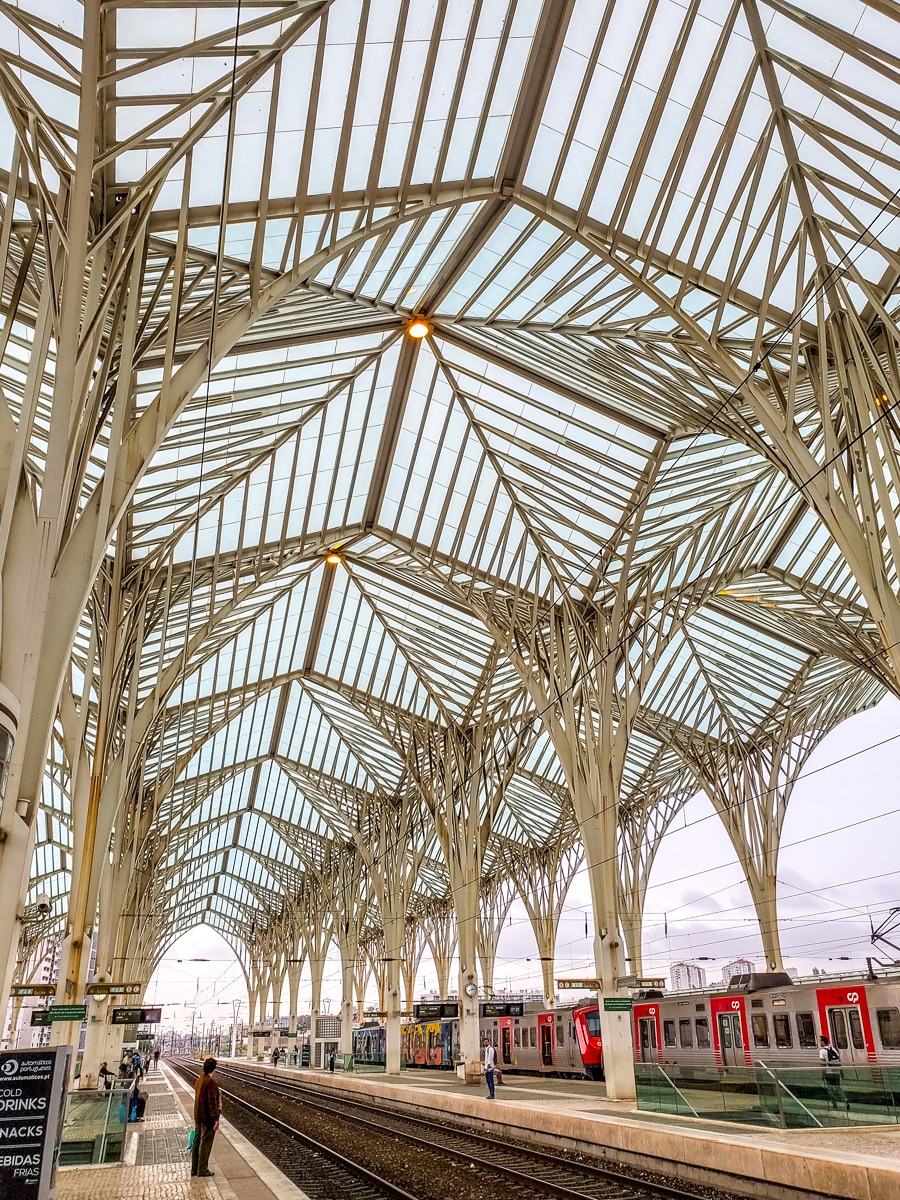 Anyway, we departed Florida, and after a short layover in Boston, we flew direct to Lisbon where we arrived early in the morning the next day. We retrieved our two checked bags, and took the Metro to the Lisbon Oriente train station.

The Lisbon Oriente station was designed by the famous Spanish architect Santiago Calatrava who also designed, among other beautiful buildings, the exceptional Milwaukee Art Museum (MAM). We visited the MAM this past summer while staying with family in Wisconsin.

It should go without saying that we both felt a bit jet-lagged, and as we didn’t sleep too well on the flight, the 3-hour train ride to Porto provided an opportunity for a solid nap. We were rocked by the motion of the train as we sped along at 180-230 kph (111-143 mph). Fortunately Porto was the end-point of the train so we really didn’t have to worry about passing our stop as we slept.

Once we arrived in Porto, it was still too early to check in to our apartment, as it was still being cleaned, but the owner allowed us to leave our luggage as we went out to wander. 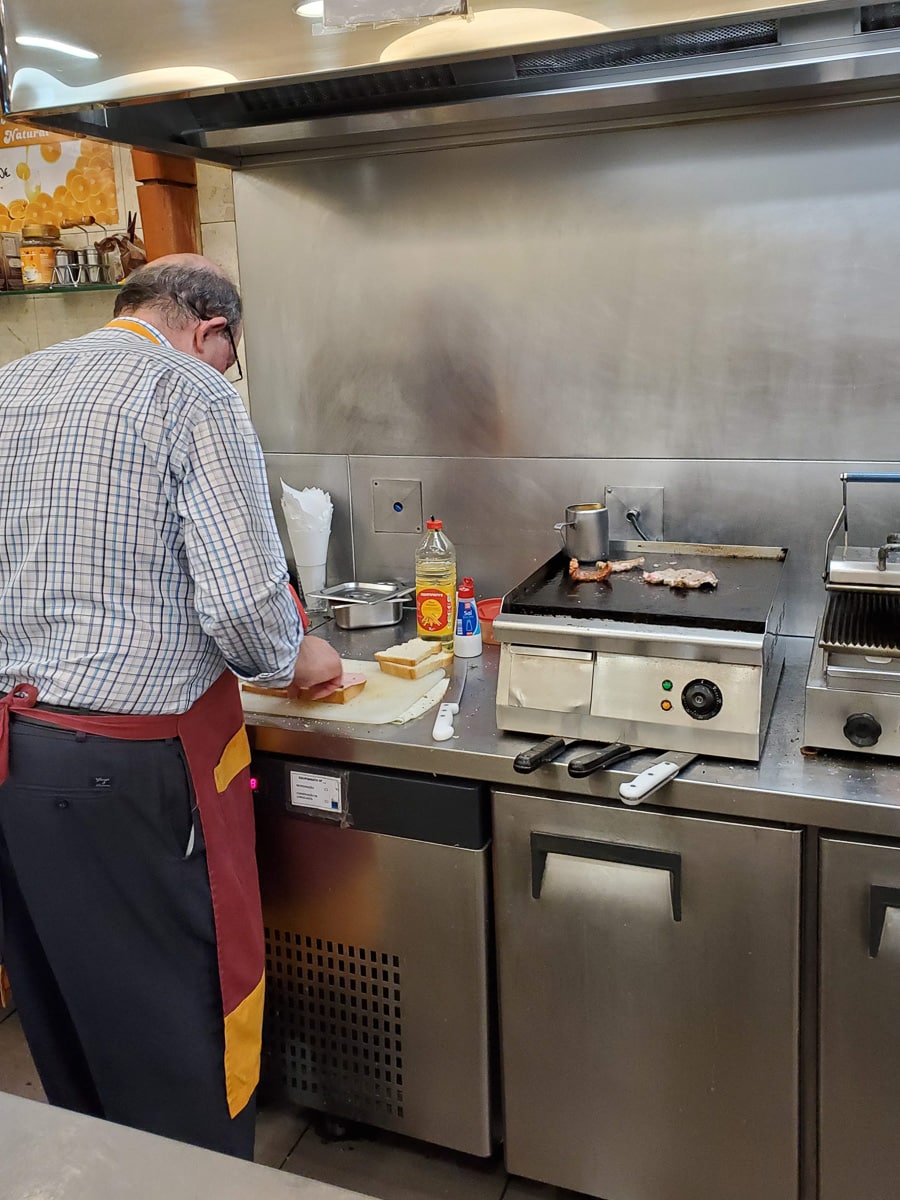 The first order of business was to find something to eat.

We came across the small, charming Confeitaria Belo Mundo, a coffee shop, tapas bar & restaurant. It was packed with mostly locals having their mid-day meal. There were no tables available, but there were two empty stools at the counter, which turned out to be a perfect spot to watch the ballet of waiters and cooks as they dashed and spun around each other in the tiny space carrying hot food in one direction and empty dishes in the other.

We each ordered a plate of the day, Jeannie had the pork, with rice and fried potatoes, while Chris had hamburger patty on rice, topped with a fried egg. Very inexpensive and entertaining, and we got to watch the meals being prepared, especially a couple of rather famous (and decidedly decadent) franeschina sandwiches (the franeschina would have to wait for another day). 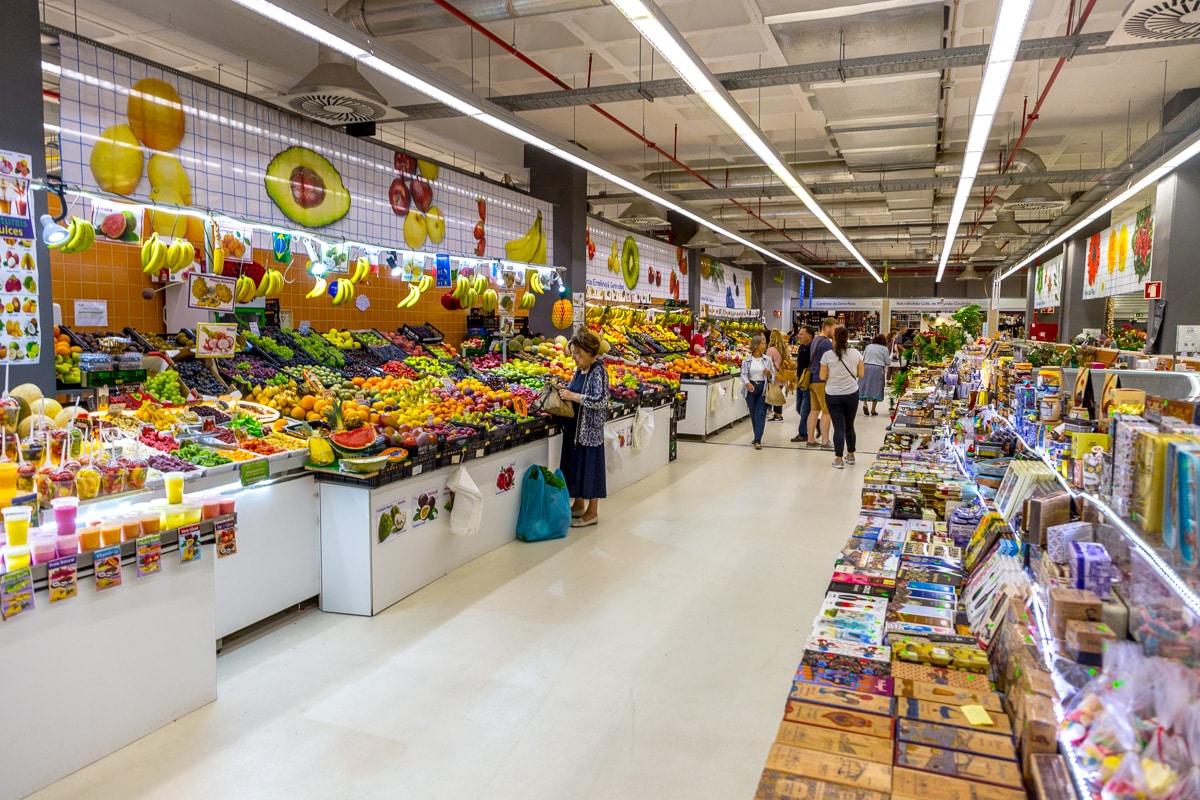 After lunch we were then able to march on in search of the Mercado do Bolhão. This market was opened to the public in 1914 and specializes in meat, fish, fruit, flowers, vegetables and many other colorful products. Google maps took us right there, but the bad news was that it was closed in spring 2018 for a major renovation project. The good news was that most of the vendors relocated to a temporary location just a few hundred meters away in the basement of a shopping mall – the Mercado Temporário do Bolhão. No fixed date has been given for its reopening, and to us it still seems several years away. Nevertheless, it is close to home and filled with everything we might need, and more. 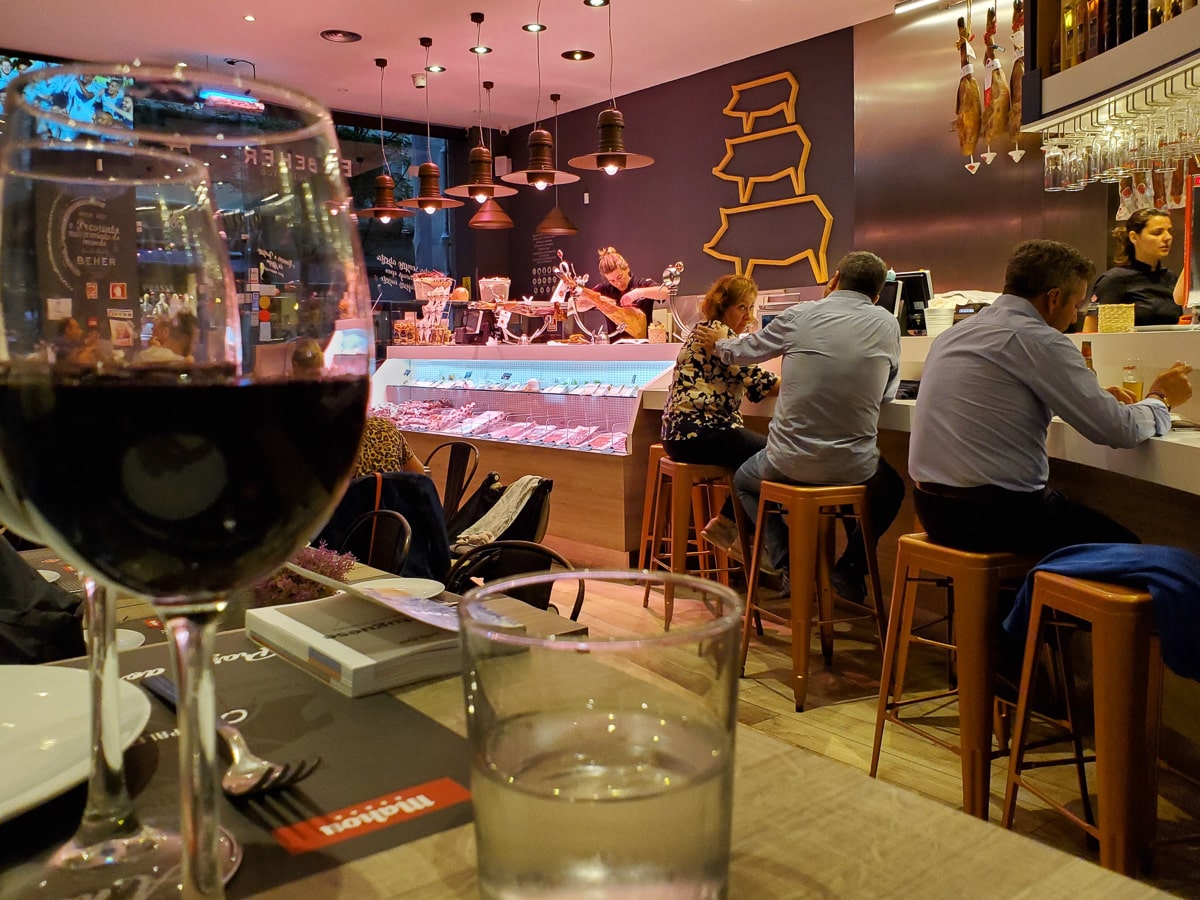 When the time finally arrived to settle in to the apartment, we unpacked, showered, and crashed for a couple of hours. By then it was time to find a place for dinner.  Beher-Porto, nearby, turned out to be a great place. We shared a plate of fine Presunto (ham), each ordered a salad (next time we’ll share), and Pimentos Padrón? Oh and wine, inexpensive and very good! We were seated in a location to be able to watch as all food came out of the kitchen, before being delivered to the tables. Yumm.

We strolled back to our apartment where we fell into the deep slumber of jet-lag addled travelers. 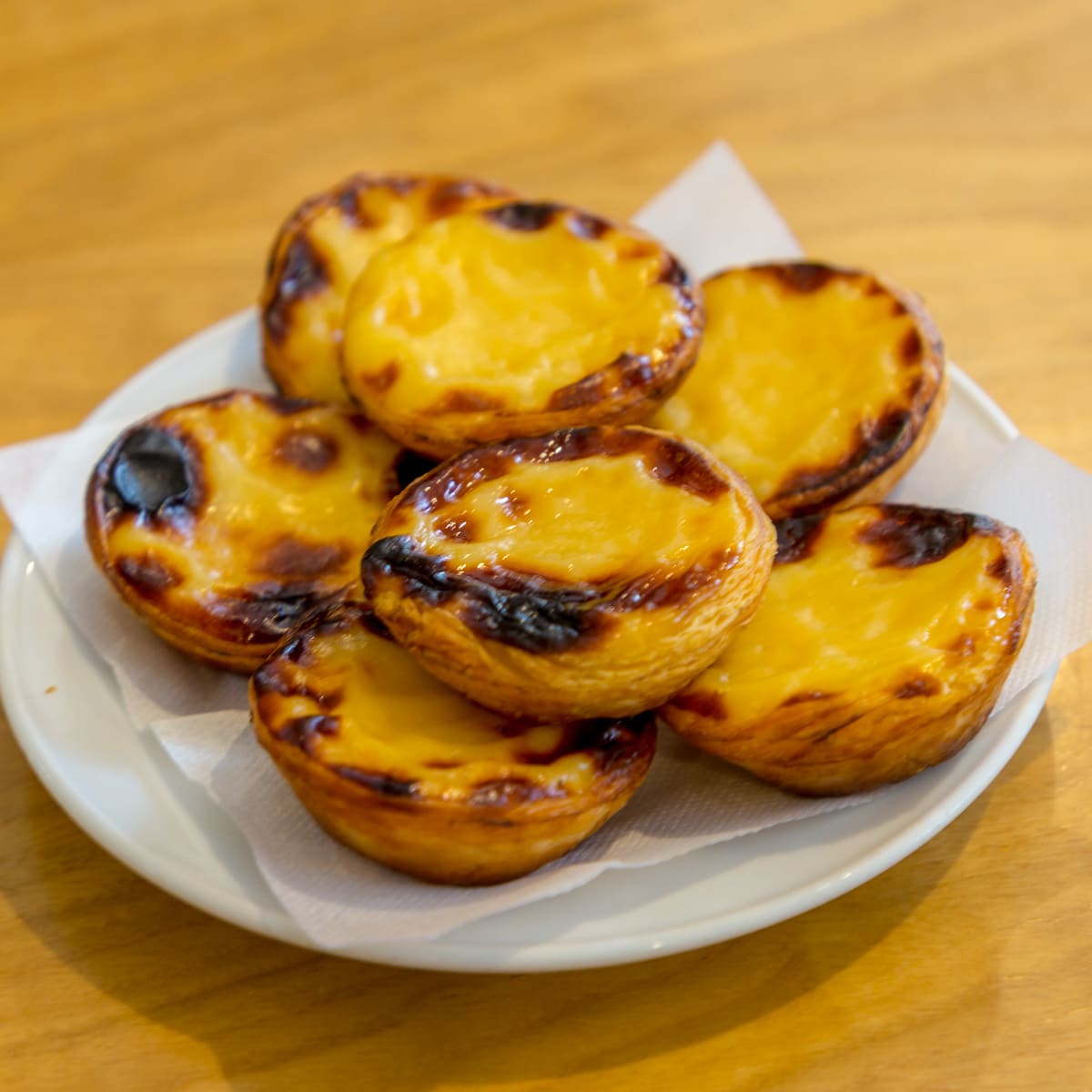 The next day we awoke at about 07h00, a rather normal time for us. But even after coffee we were still a little foggy, so we took off for more coffee and a traditional Portuguese breakfast – a Pasteis de Nata for Chris, and a croissant for Jeannie, and a meia-de-leite (coffee with milk) for each of us.

Adequately fortified, we wandered. Lots. And before heading back to the apartment, we walked to a small, nearby grocery store, Pingo Doce, for a few basics like cereal, tea, yogurt, and of course wine.

After returning to the apartment with our groceries, we booked a Tapas and Wine tour with Porto Walkers for the next day, Friday.  We have done this in other places to help orient us to the local food scene. 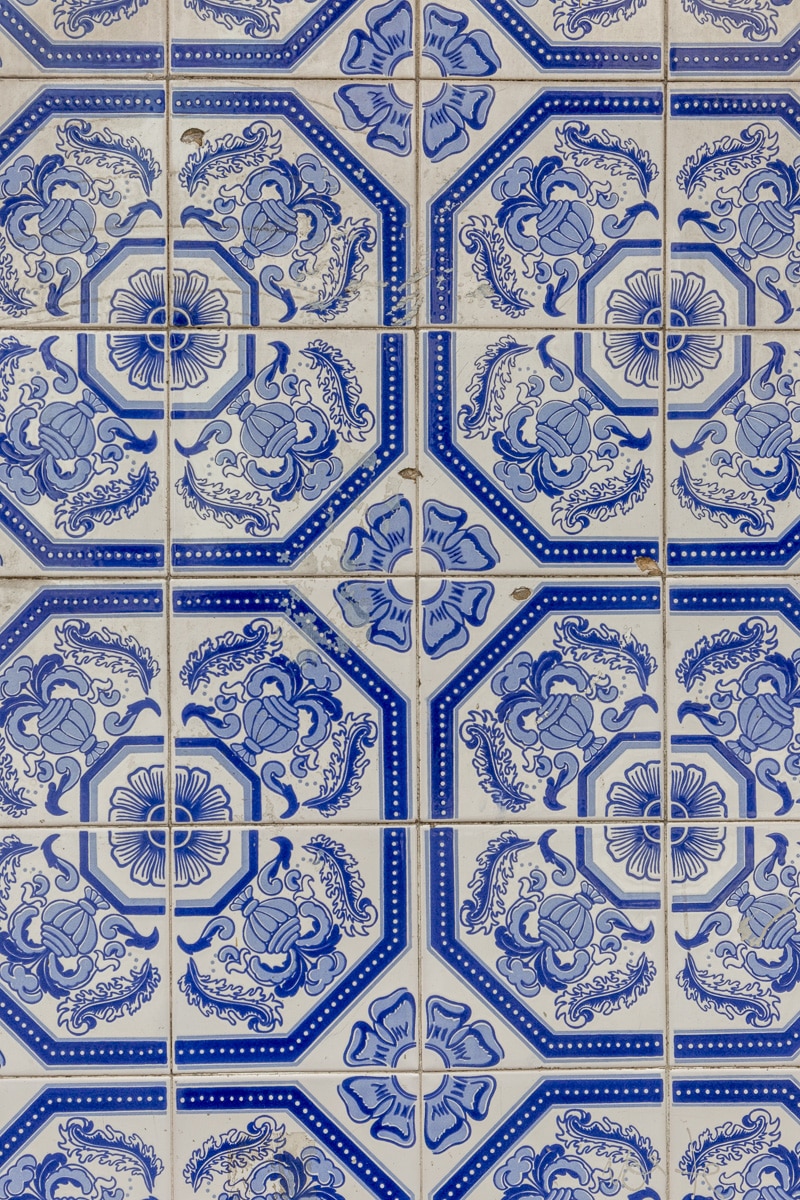 By then it was time to decide where to eat. Our first choice was not available so we decided to go to small place down the street that we had seen earlier. Thinking it might book up we decided to go out early. Arriving before 6:30, there was only one other couple seated but within 30 minutes all tables were full and more people kept coming in to try for a seating. So glad we arrived early.

To begin we shared a rather large, mixed starter plate of cheeses, hams, sausages, olives, bread, and a glass of wine for each of us. Next we ordered two tapas and two more glasses of wine. The total bill was remarkably reasonable, including four glasses of wine. Portugal is very economical.

After the very short walk home, we crashed early, around 10h00. 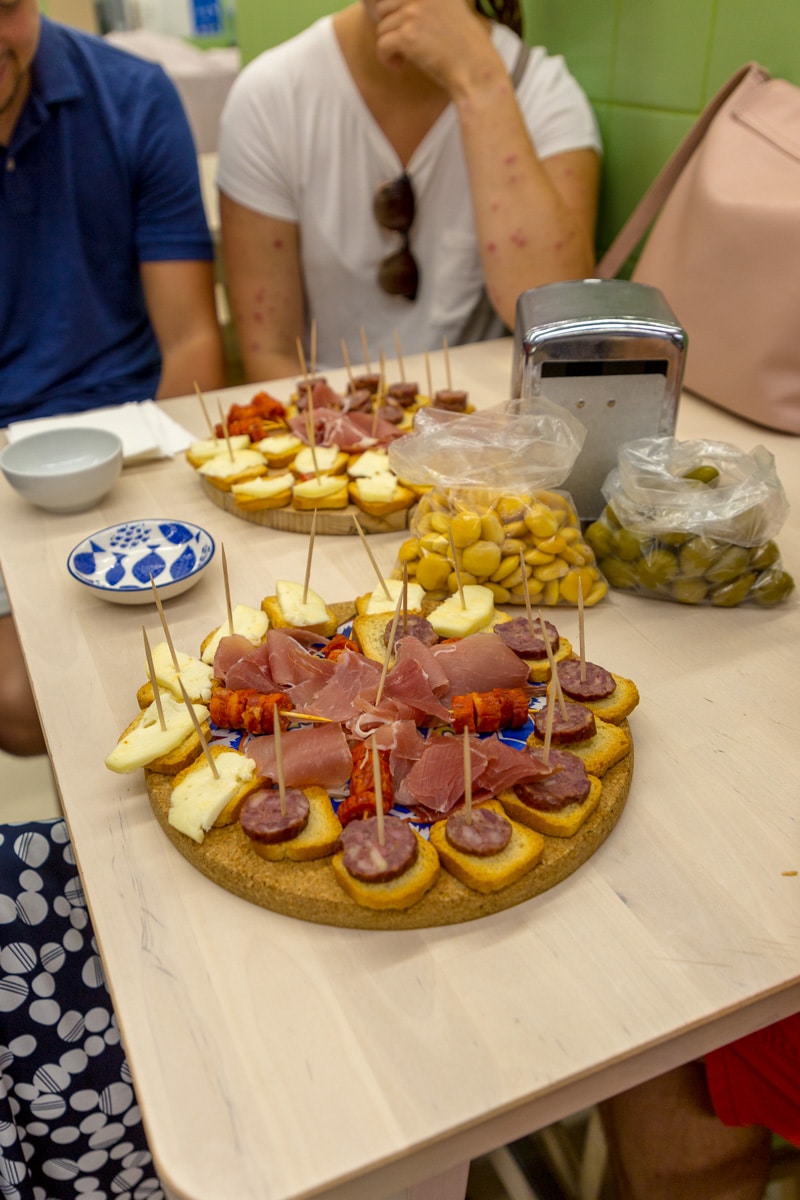 There we met Lukas from Porto Walkers, and two young couples from Germany.  Our first food stop was in the market at one of the prepared food booths.  We all sat at a table where Lukas brought “tremoços” (lupine beans traditionally eaten as a pickled snack food), olives, trays with bread and cheese, chorizo, ham, more cheeses and dark heavy bread, plus a day-old sweet bread, and a bottle of white wine. And this is only the first of several stops! There was a lot of good conversation, sharing information about ourselves, and Lukas telling us more about Porto and its food.

The next tour stop (2) was Manteigaria for Pasteis de Nata. Watched the lining of the cups with pastry, another person filled them with the custard and put trays into the oven. We each ate one, yum. These were even better than the one Chris had yesterday! 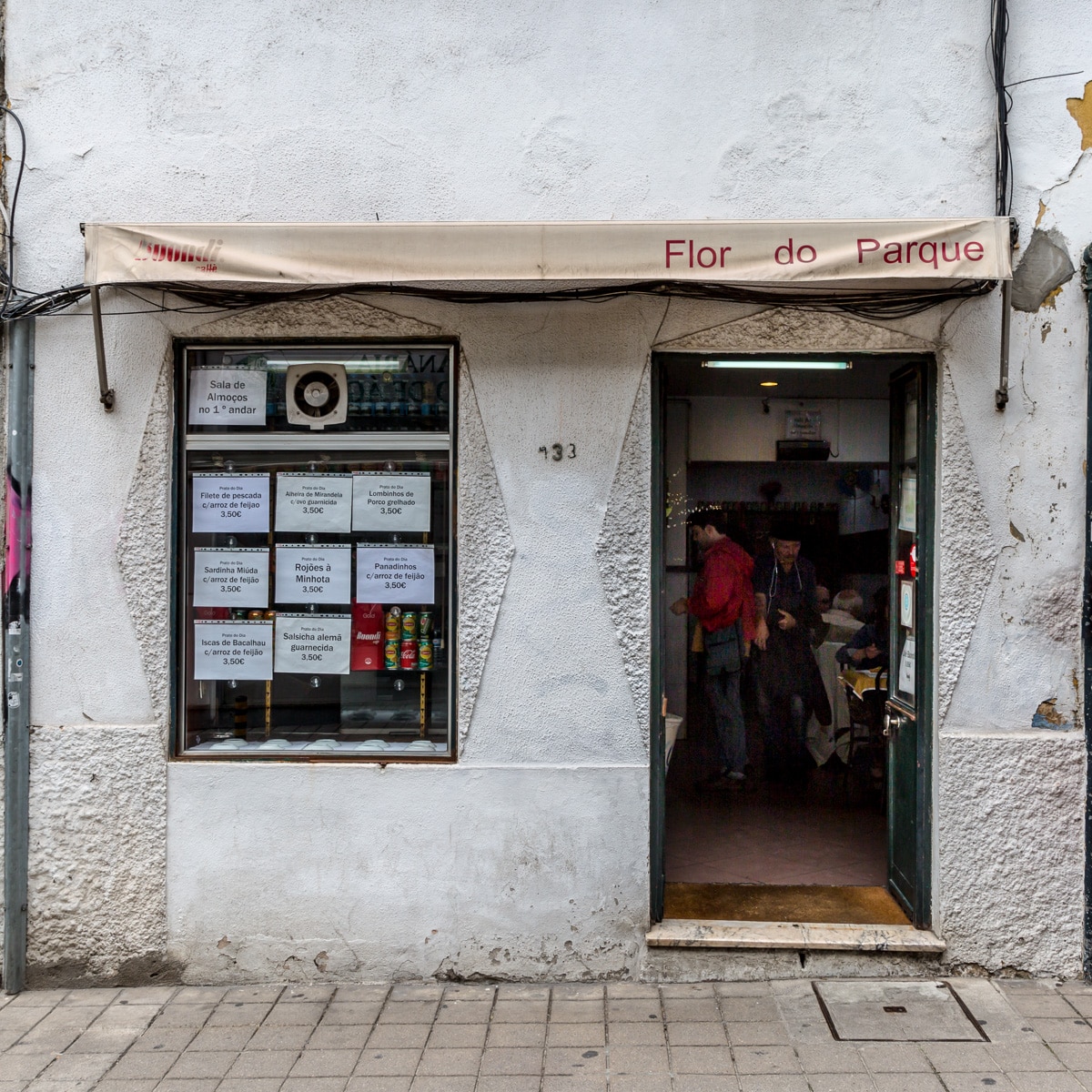 Stop 3 was brief as Lukas dashed into a crowded shop and picked up some “snacks” and then took us into a classic Portuguese cafe/restaurant Flor do Parque. We were taken upstairs where the waiter brought a bottle of white wine, iscas de Bacalhau (cod fritters), a kale soup, and then Lukas opened the “snack” bag to reveal several meat and fish filled cakes. Oh my, so much food!

Stop 4 was a bar/pub/tavern. We had a choice between beer and rose wine to go along with the roast pork sandwiches, and octopus salad. It was impossible to finish all the food. One curious thing about this tasca or tavern was that whenever someone orders water, a bell is loudly rung as a “public shaming”. 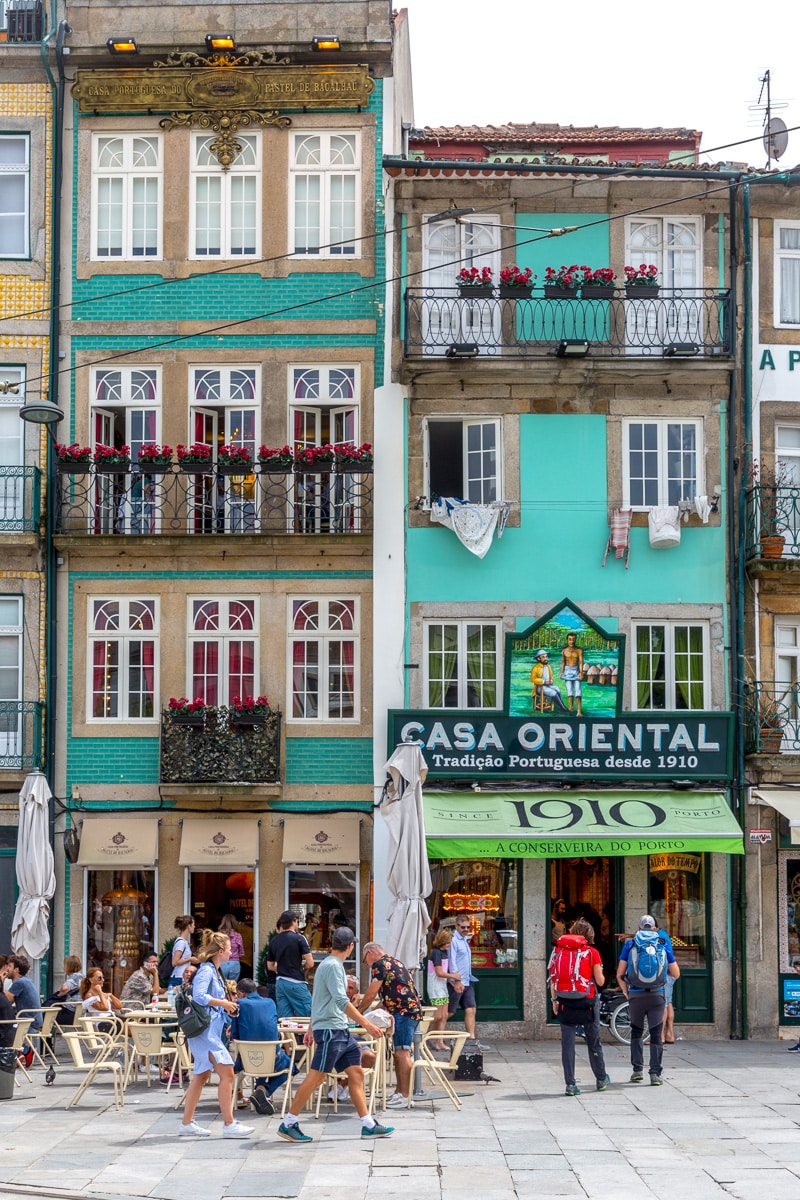 Our last stop was a café where we sat outside for espresso and a small sweet. There was still more conversation, tips on where else to go, and then we all said our goodbyes.

Roaming down toward the river we discovered many fascinating sights. However, we were stuffed and tired, so we began to head home. Along the way we made a brief stop at the grocery store for salad ingredients and a bottle of wine. Think we’ve done enough today.

Back in the apartment we considered a concert we had seen advertised but realized we would probably fall asleep during the performance. So, we will try again next week. We did however book a free walking tour, again with Porto Walkers, for tomorrow morning (Saturday).  Then we fell into bed and dreamt of the adventures yet to come.