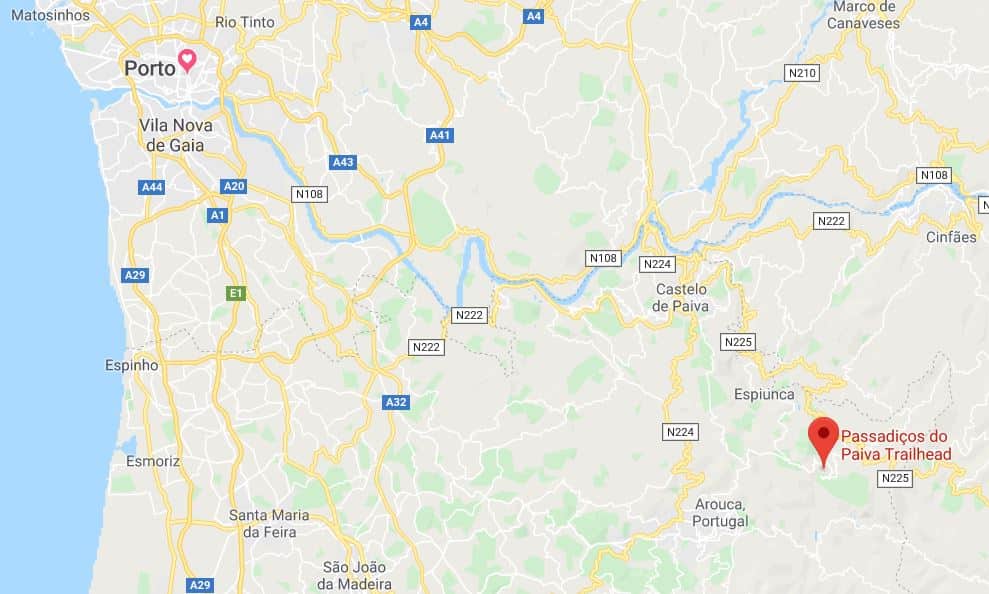 17 September 2019 – We had been told that we would be impressed by what’s called one of the most beautiful riverside hikes in Europe. The Paiva Walkways or “Passadicos do Paiva” is a well-constructed, wooden, boardwalk with winding stairs that follows the Paiva River for 8.7 K (5.4 mi) providing incredible views and a marvelous immersion in nature. We were told right.

For eco-travelers, the Paiva Walkways is a wonderful way to see a part of the Arouca Geopark, a member of the European and Global Geoparks Networks, and recognized by UNESCO as a Geological Heritage of Humanity. The Walkways have also been recognized as a Leading Adventure Tourist Attraction both for Europe and the world at the World Travel Awards for several years running. 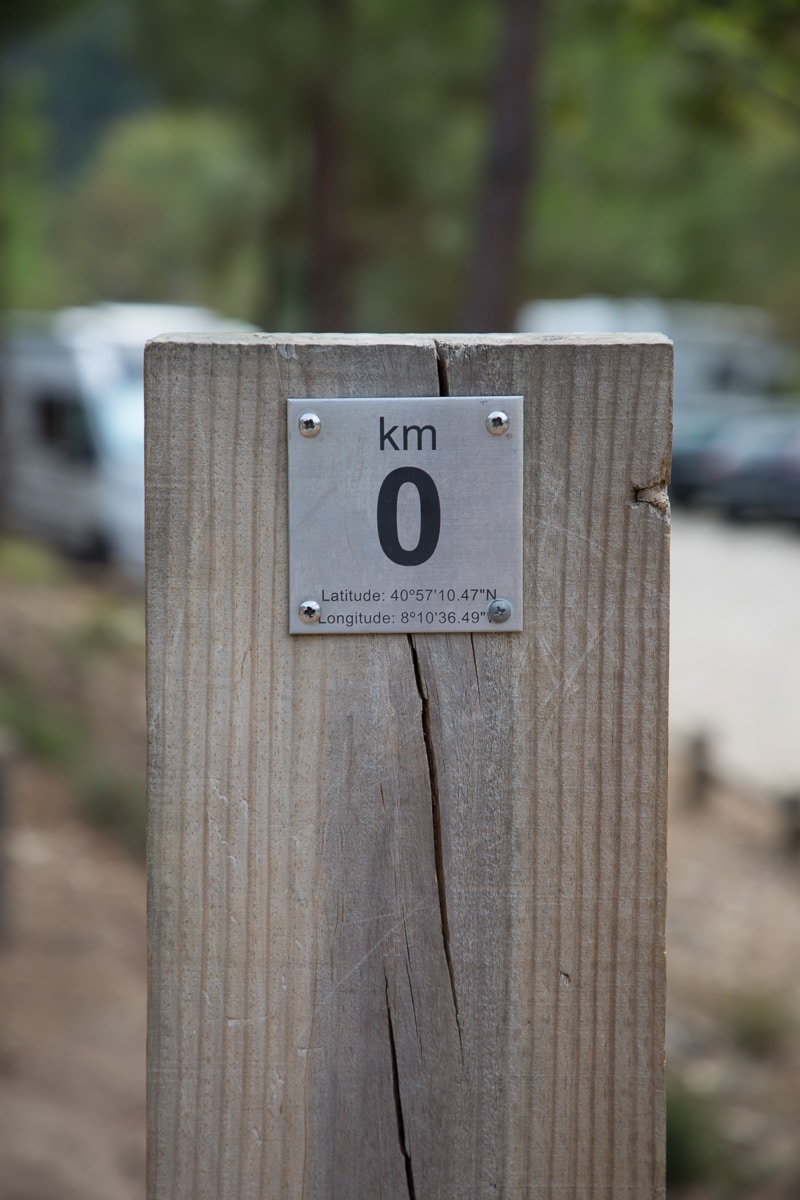 Besides hikers and mountain bikers, it is not uncommon to see adventurers rafting, kayaking, and canoeing on the river. And the Paiva River Fest, an international kayak competition and other international whitewater festivals are held here.

The park is located in the Arouca municipality, about 72 km (45 mi) from Porto. It is not served by public transportation, and since we didn’t have a car, we signed on with a tour that would pick us up outside our apartment, take us to the trailhead at Areinho and get us home after we finished. 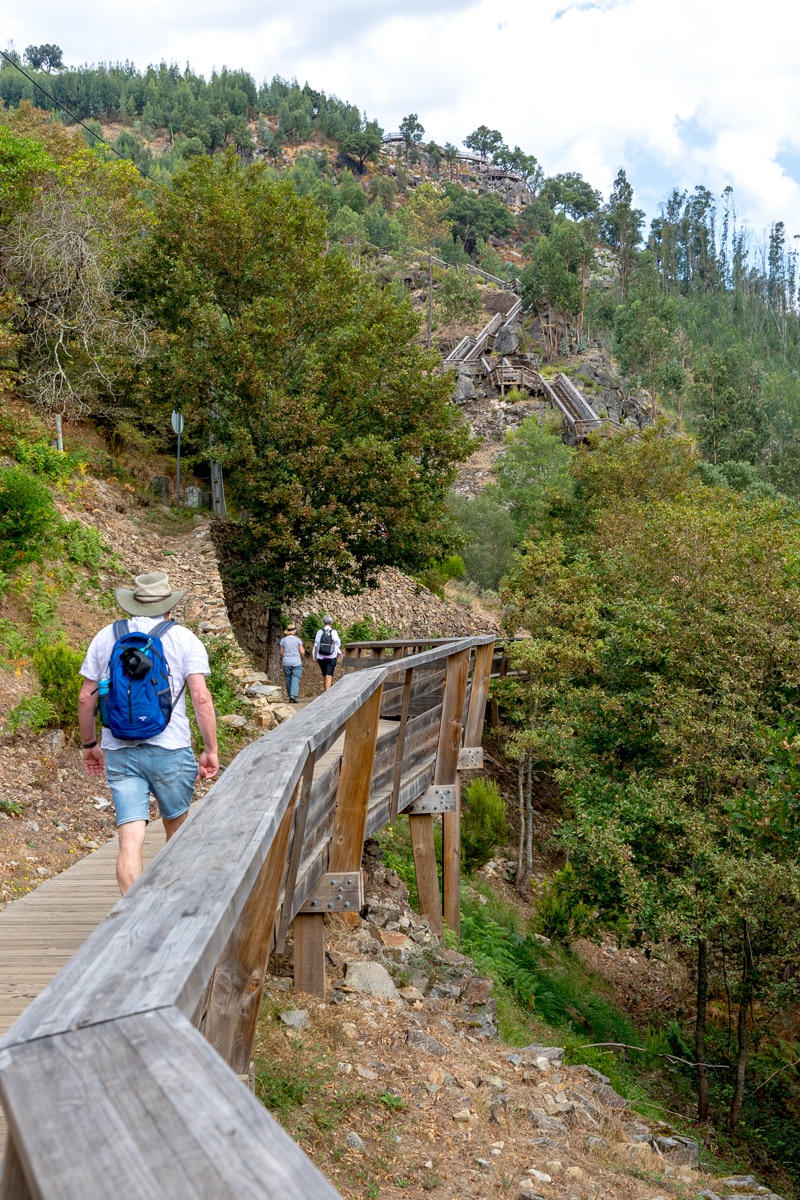 We were outside waiting when João (John), our guide, pulled up right on time. He picked us up first so Jeannie could have the front seat (best to avoid motion illness). It took a little longer to collect other 6 passengers due to traffic and an address miscommunication. When we were finally on the way, our diverse group consisted of woman from Spain who spoke little to no English or Portuguese, a couple from Hong Kong, a woman from Brazil, and couple from Western Australia.

When we arrived at the trailhead, we all exchanged phone numbers with João so contact could be made if needed. Then, after a comfort stop, we were on our way. 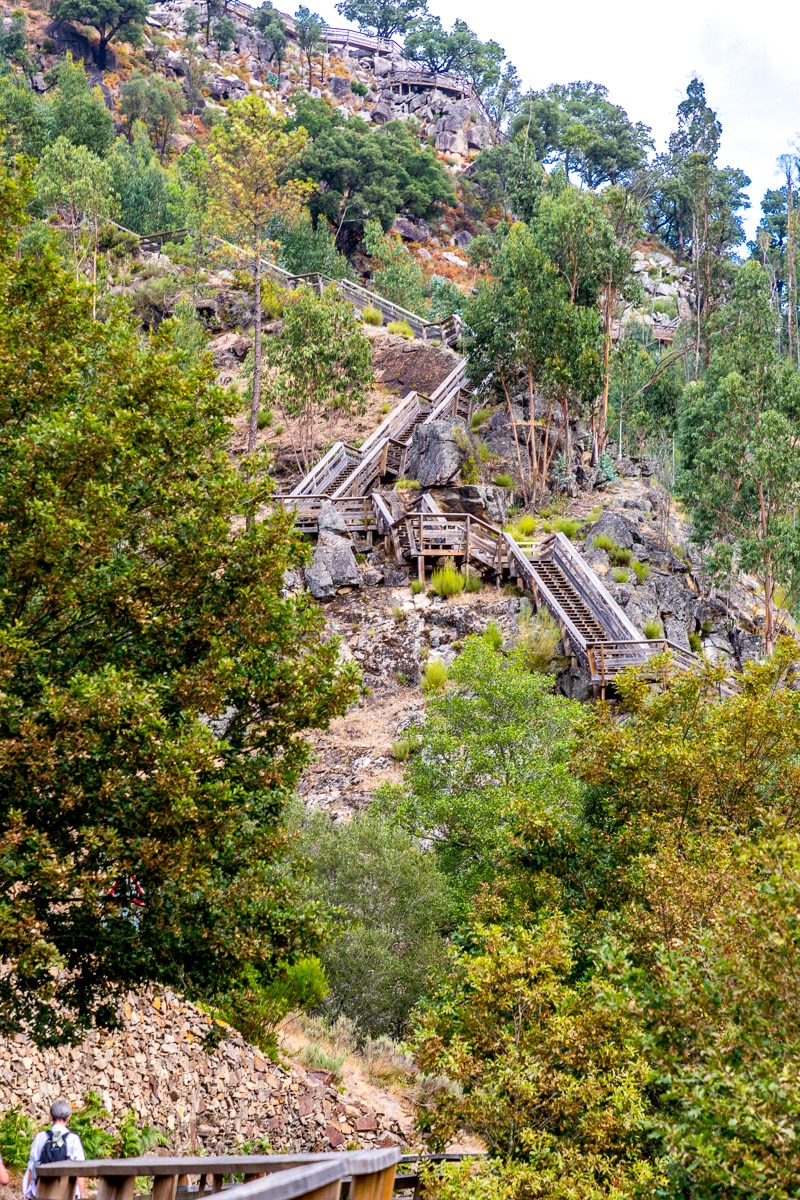 It is possible to approach the walk from either end, but the recommended route is to get the worst climbs out of the way at the beginning. The 500 or so steps up, (ugh, gasp, pause, breathe) seemed to never end. Then we had to descend a similar number of steps, not so hard.

After the big descent, the walk leveled out, undulating and winding along the river. Working its way around boulder and trees, the geologic and botanical diversity was amazing.

The walk was remarkably beautiful. The sounds of the river, the wind in the trees, and the songs of birds provided a perfect soundtrack for our stroll. Everyone else had gone off at their own pace, and since the weather looked good, we too could take our time. 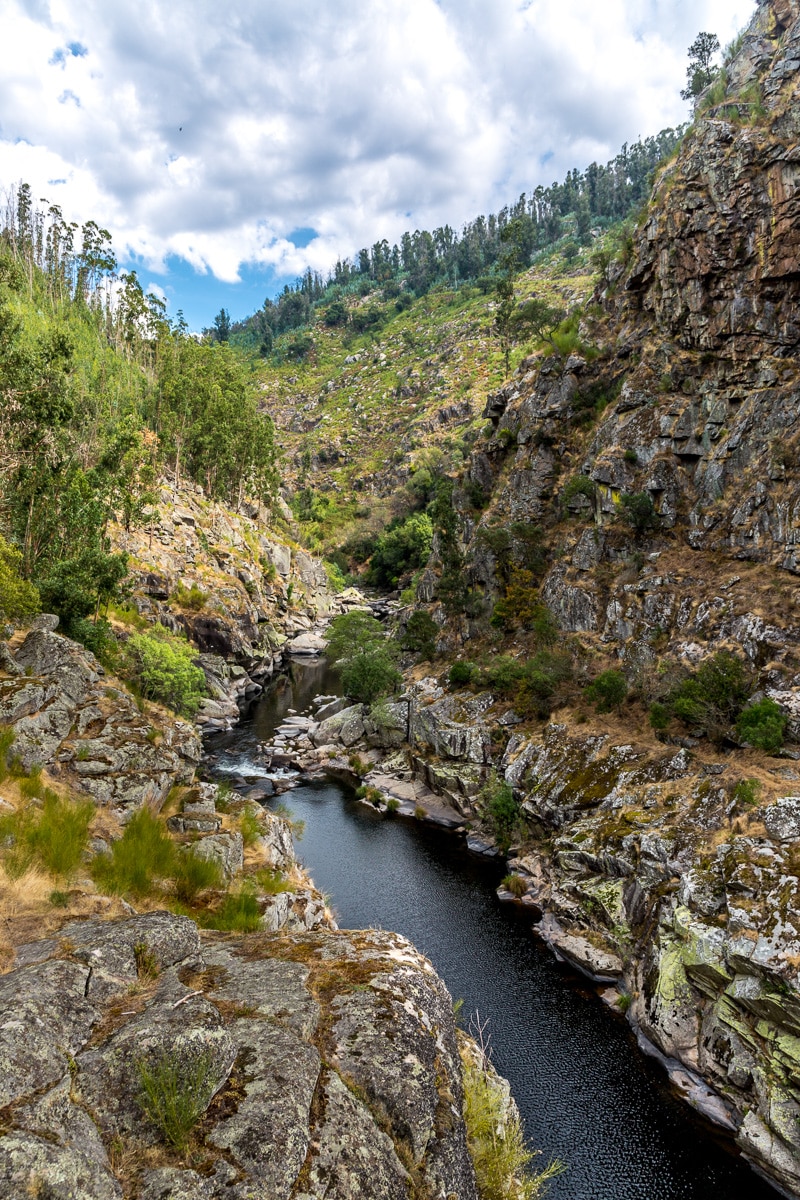 It was only a little further along where João met us with more water and small snack bars. There he explained how our rendezvous at the end would work before he took off to meet the others who had chosen the lunch option in town. We, on the other hand, had chosen the self-catered option and took a short side path down to the river to enjoy the picnic we had packed.

As we were finishing our lunch, we noticed large, white, clouds building in the distance. The potential for rain seemed to be increasing so we packed up, took a comfort stop, and begin our trek again. There were not many others on the walk, unlike in summer when hordes of tourists reportedly descend. 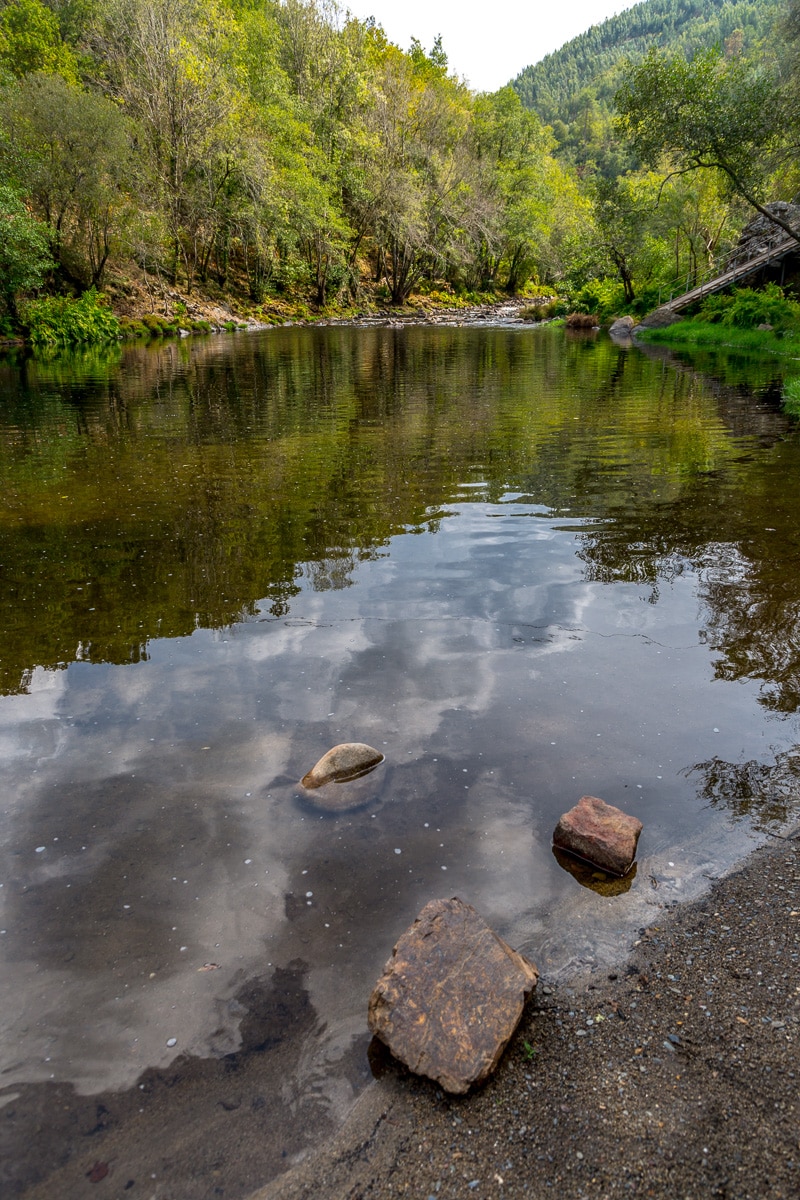 There were many opportunities for photography, so we stopped often, always keeping an eye on the clouds that continued to build. The rumble of thunder in the distance kept our pauses brief but we nonetheless maintained a comfortable pace. This was too fascinating a place to rush.

The rain never materialized, and once we reached the end of the trail, a snack bar provided some much needed refreshment. We would soon be picked up here by João and the others who had gone to lunch earlier. As we waited, we sat with the couple from Hong Kong at some picnic tables and had a nice conversation. Soon João and the others arrived to collect us. It was a fairly quiet group on the way back but we had a nice chat with João. He recommended 2 restaurants in Porto. We were the first to be dropped off and it was nice to be home.

After a pretty, tiring day, we settled for a simple soup dinner, and turning in early we dreamt of being out in nature with birds, gentle breezes, and blue skies.