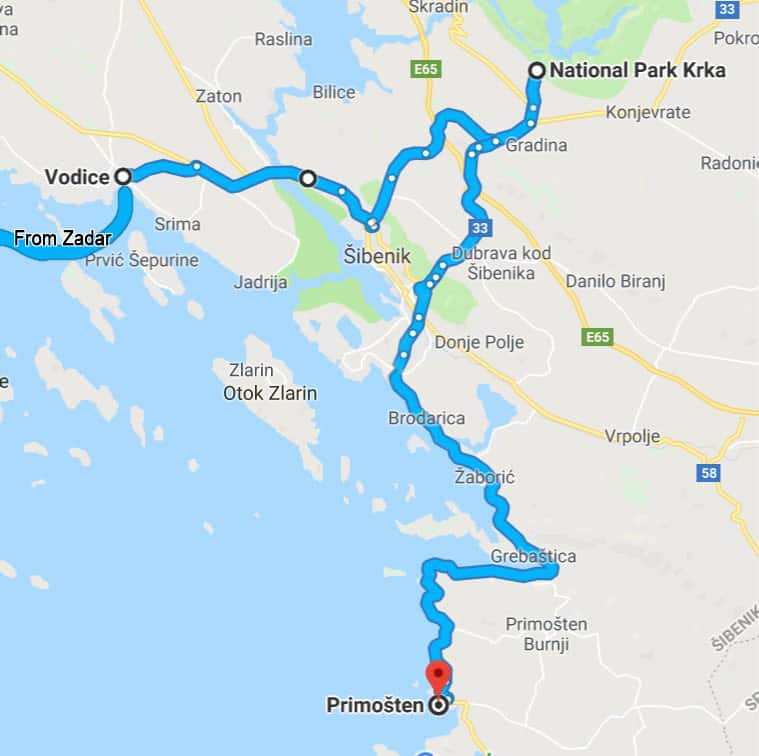 Tuesday 19 June – The Stella Maris departed Zadar just after 1100, lunch was served on the ship as we cruised for about three hours to the popular tourist port, Vodice. Unfortunately, there wasn’t time to explore the town as we quickly boarded a bus to our day’s first destination, the Krka National Park.

Encompassing most of the 73km (45 mi) Krka River, the Krka National Park runs from the Adriatic near Šibenik nearly 50 km (30 mi) to the mountains of the Croatian interior. It is the second most visited national park in Croatia. There we visited Skradinski Buk a set of beautiful cascading waterfalls and lakes, with raised boardwalk trails winding through the watery, forested landscape. 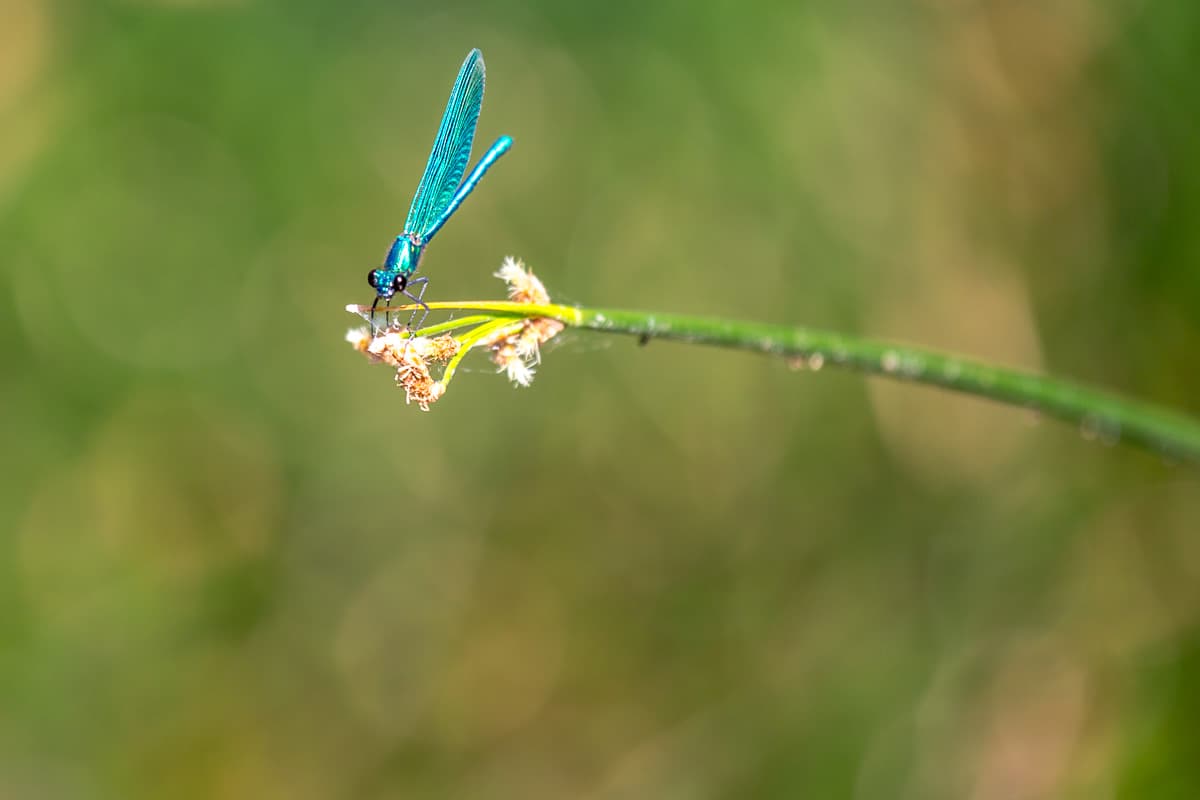 The area is renowned for its unique flora and fauna, and we spotted many fascinating birds, fish, reptiles, and insects as we walked along. The waters of the Krka were everywhere around us, flowing like a flood between trees, shrubs and small islands, constantly changing the shape of the landscape.

Geologically this whole area is predominantly a karst topography, meaning that the rocks are of limestone which is easily eroded and sculpted by water. The limestone-enriched waters also form new rocks by deposition, forming shelves and ledges. It is the largest travertine (a form of limestone) cascade system in Europe. 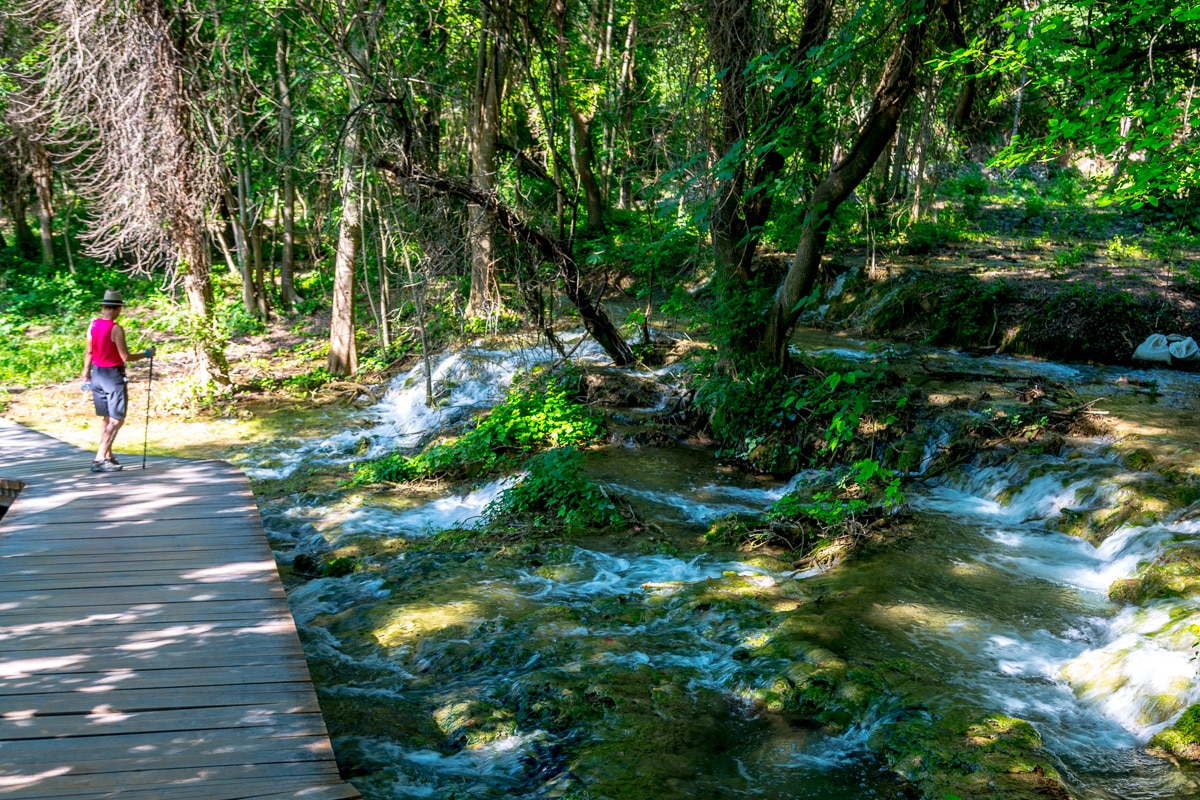 The walking tour began with fascinating descriptions of the origins and history of the National Park. The wonderful sights all around quickly distracted us, and though we began the walk with the group tour, we soon dropped off to go at our own pace.

Later, we all reassembled at the bus, boarded, and made our way the 40km (25mi.) to the town of Primošten, where our ship was docked for the night. 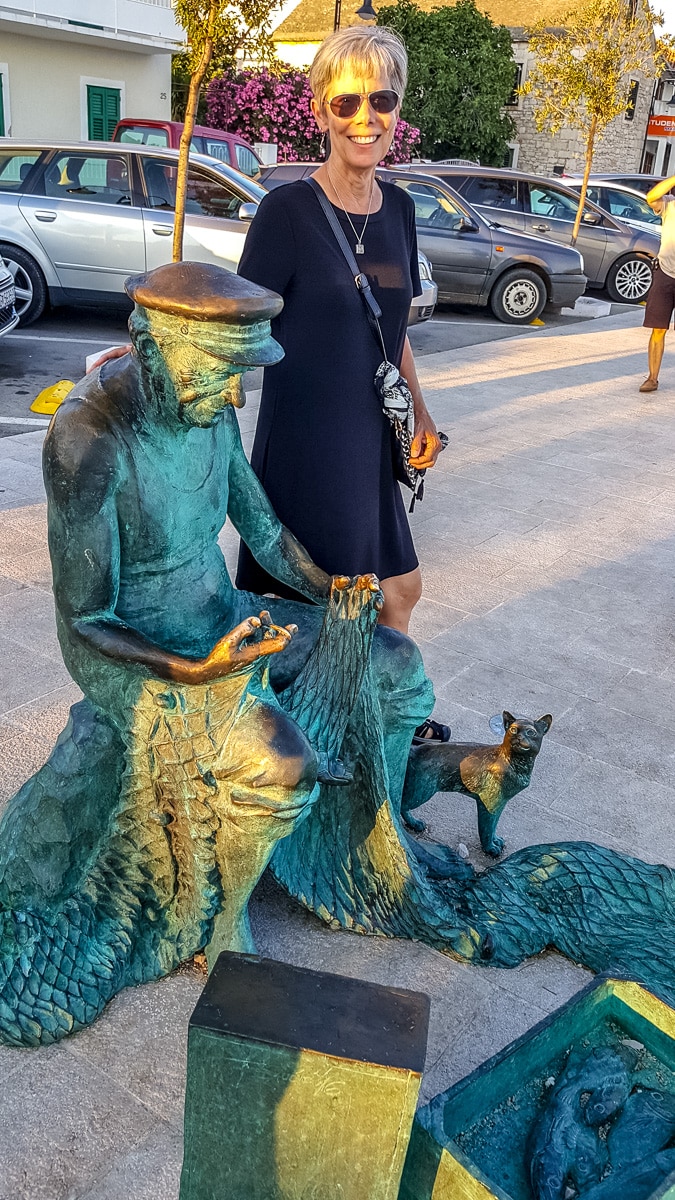 Primošten is a small town located between Sibenik and Split. The old town was originally situated on a small island protected by stone walls and towers. In the 16th century a drawbridge connected the village with the mainland, and later the bridge was replaced by a causeway, thus making Primošten a peninsula.

Tonight’s dinner was on our own. As we walked into the old town from the marina we joined several of our cruisemates. Passing through the ancient stone gates we discovered a number of waterfront restaurants, and being hungry we quickly settled on one. They were able to put a large table together for the eight of us, and almost everyone ordered pizzas – delicious. 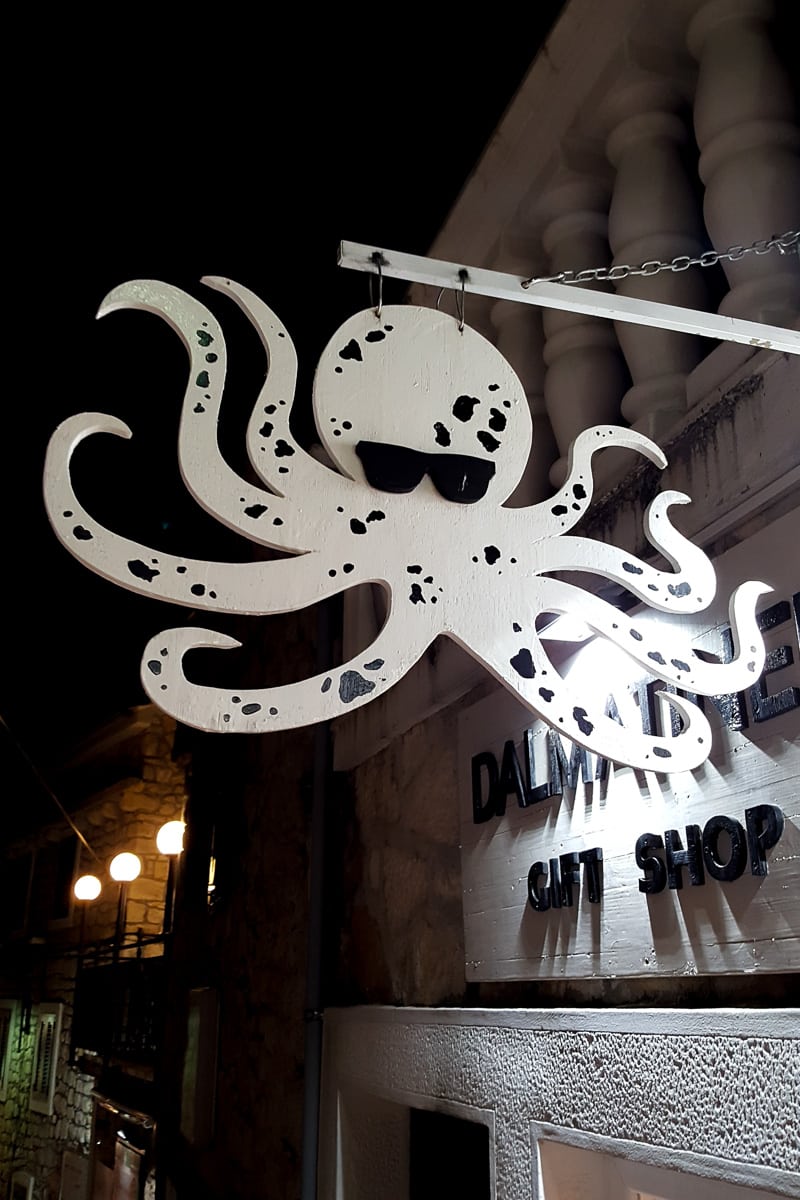 The area is well known for its wine, and grape cultivation dates back from the Illyrians in the 8th century BCE through the Greeks and Romans who later settled in the region. Rob, from New Zealand, was aware of the locally famous wines made from the Babić grapes grown here. So, he ordered a couple of bottles to help determine if the wine’s reputation was deserved. Indeed, it was.

By the time we finished dinner it was dark, but the evening was beautiful and we all felt like wandering through the small town a bit. Ending up at the parish church of St. Juraj (St. George), built in 1485 on top of the steep hill in the center of the old town, we paused peering into the darkness at what was likely a spectacular view in the daylight.

From there it was all downhill back through the town and to our ship. There, after a nightcap and some more conversation on the deck, we all turned in. Tomorrow would begin early, departing from Primošten for our next stop – Split. 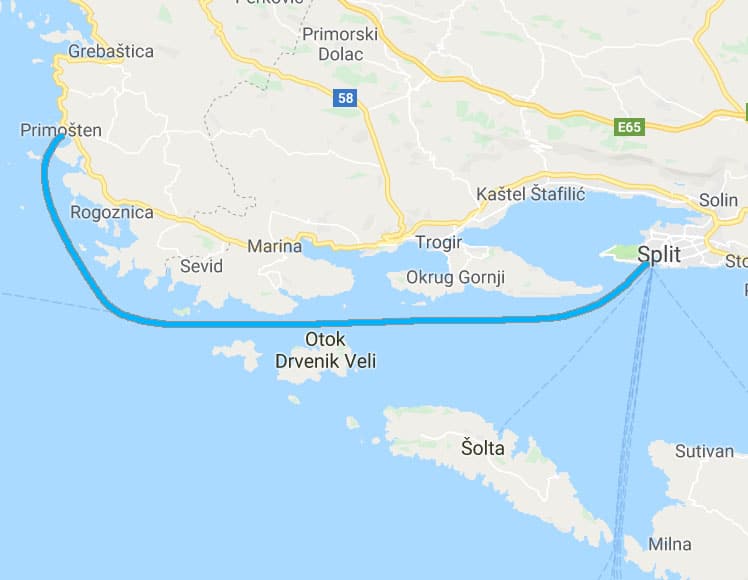 Wednesday 20 June – Split sits on a peninsula about 200km (120 mi) north of Dubrovnik on the Dalmatian coast between a ridge of mountains and the deep blue Adriatic Sea. There are many reasons to visit Split, and one was a laundry where we were told we could drop some clothes and have them washed, dried, folded and ready for us before our departure – but the attendant at the praonica or laundrette warned, don’t be early! Three other couples walked with us to leave their laundry as well, and then we rejoined our group. 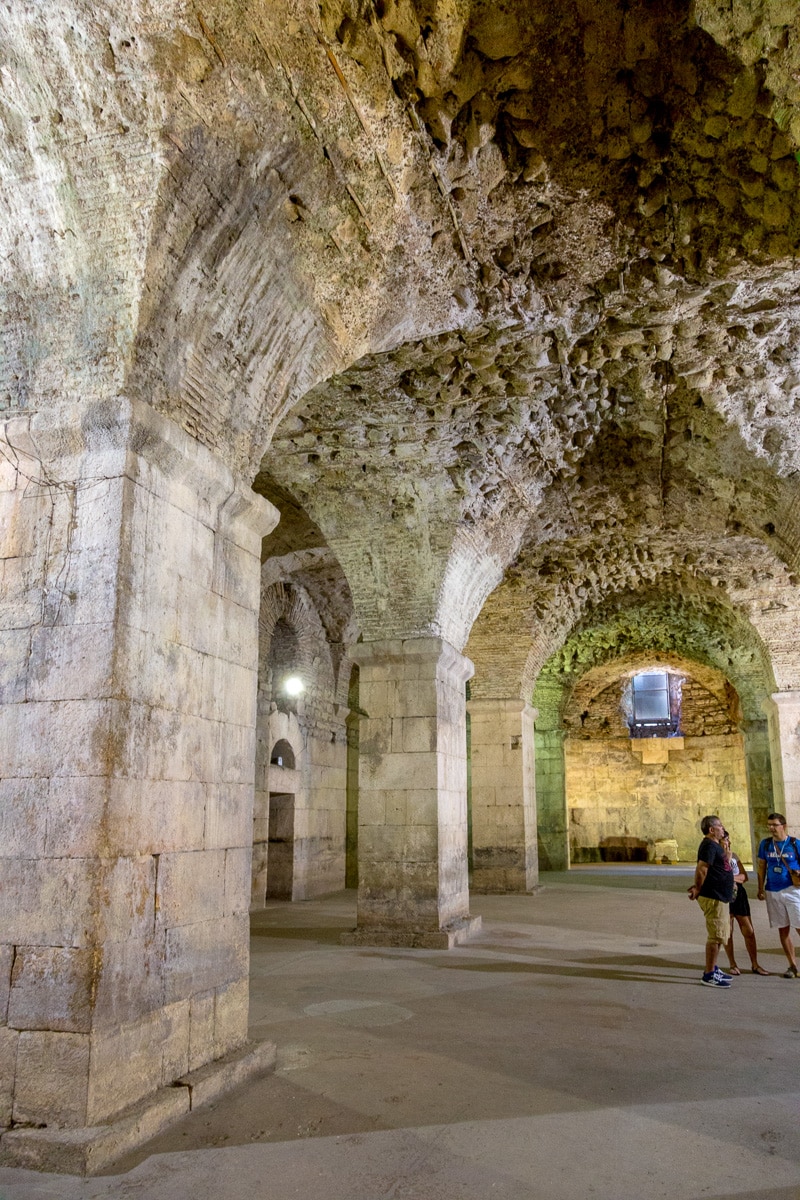 Of all the many reasons to visit Split, besides getting laundry cleaned, there is one thing that stands out from all the rest – Diocletian’s Palace.

The heart of the city lies within the walls of Roman Emperor Diocletian’s massive retirement palace, built in the 3rd century CE. It is a UNESCO World Heritage Site, and is considered one of the world’s most impressive Roman monuments. 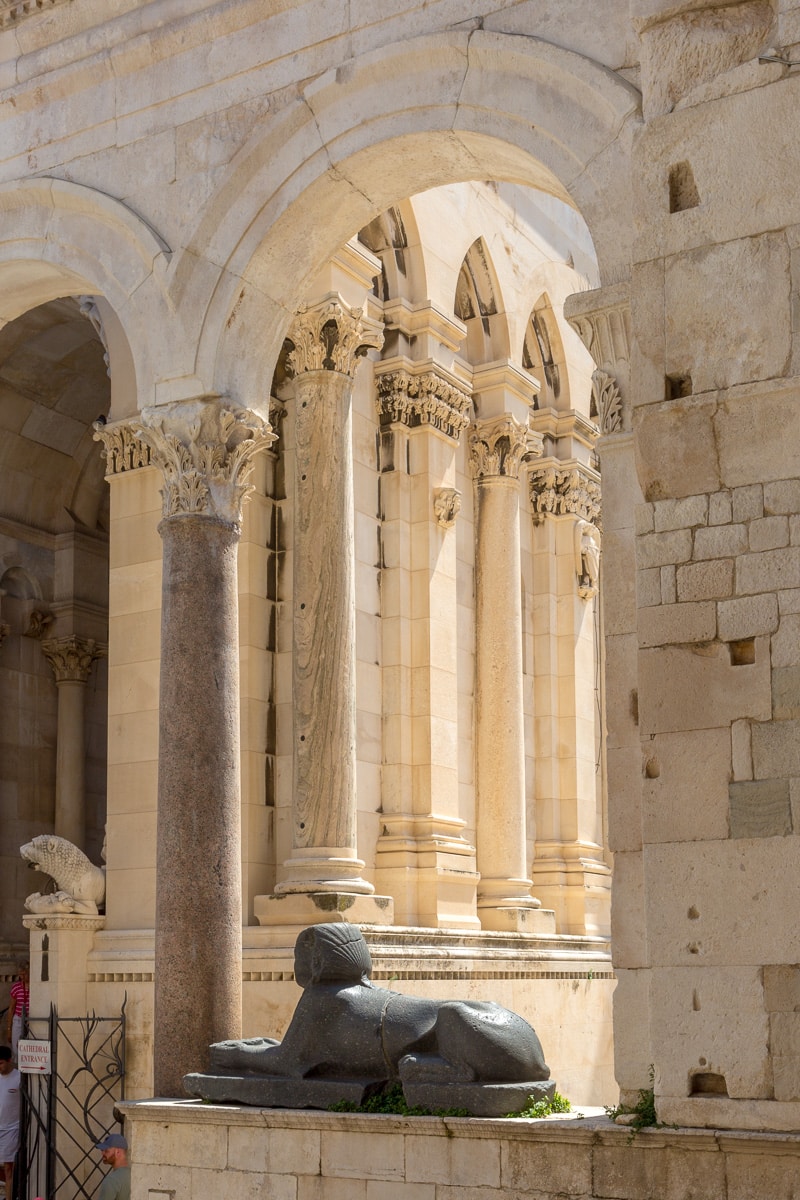 Within these ancient stone walls today are ancient structures that comprise a living city in the heart of Split. The sprawling relics include more than 200 buildings in a maze of monumental courts, temples, apartments, bars, restaurants, and shops.

With only about four hours to explore Diocletian’s Palace, we were barely able to scratch the surface, much less have time to see any more of Split. Even then we had to dodge the crowds that descend on this popular Croatian destination.

The Roman structures have also been used as a filming location for HBO’s hit series – Game of Thrones (GoT). The basements of Diocletian’s Palace were the place where Daenerys Targaryen kept her dragons, as well as serving as a location for Daenerys’ throne room, of course with many visual effects and extensive computer-generated imagery. 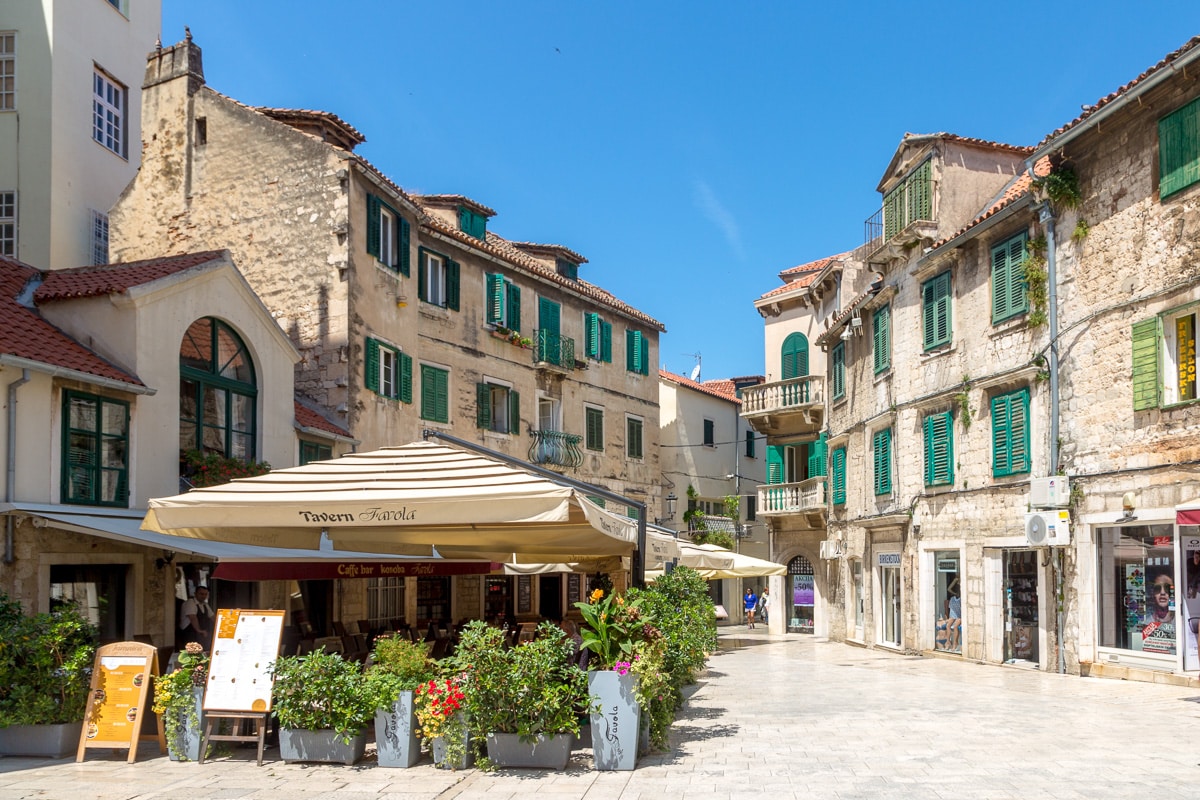 But still, it was a fascinating stroll through a centuries-old city filled with a combination of Roman luxury villa and fortress architectures. Over time the citizens of Split appropriated parts of the palace for their own needs, thus the inside buildings as well as the exterior walls and towers have significantly changed from their original appearance, but the basic configuration of the Imperial Palace is still very discernible. 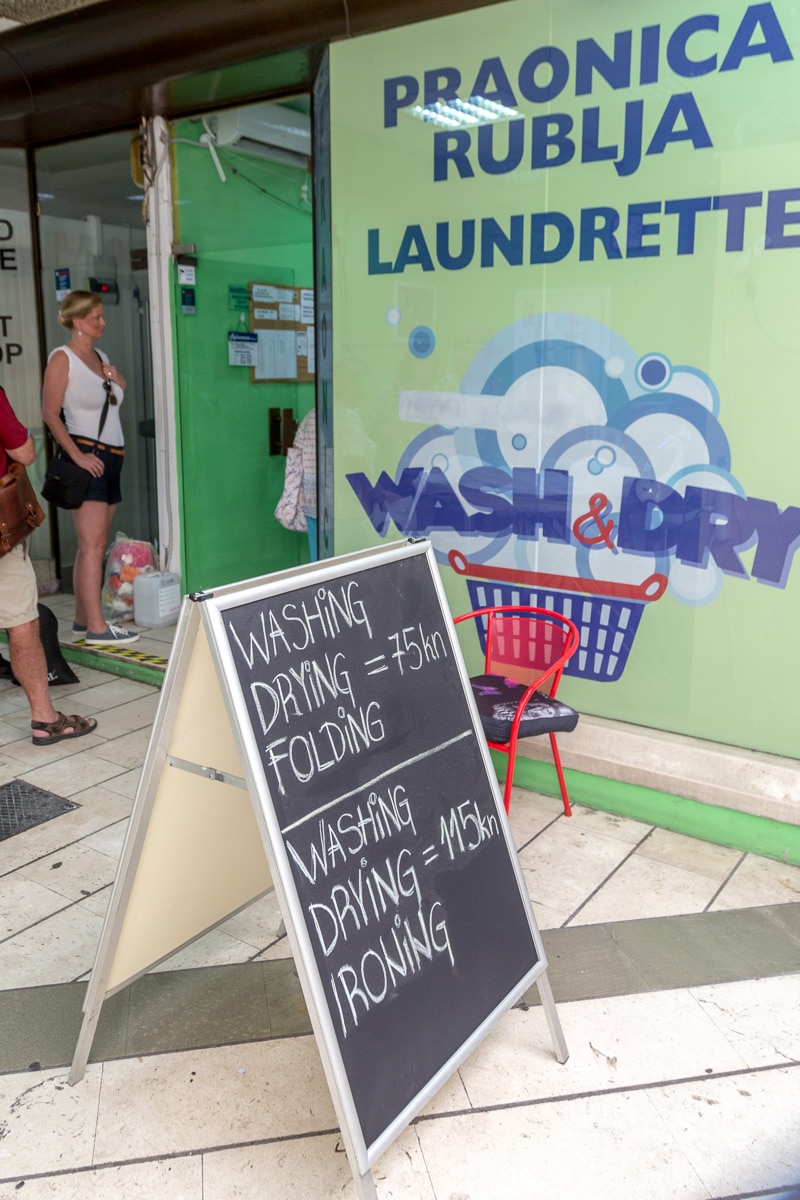 Unfortunately, we didn’t have enough time to really explore this intriguing city before having to leave. On our way back to our ship, we picked up the laundry, offered our appreciation and a tip. We then boarded for a late lunch as we cruised toward Hvar.

On the way to our next stop we anchored in a small cove for a swim in the crystal clear waters of the Adriatic Sea. It was a great location – deep, beautiful water with a stunning view of the surrounding islands. Someone said the water was cold “like just before ice freezes!” But as we ventured in, the temp was cool but actually pretty nice. We swam around a bit, and then got back on board to dry out as we proceeded to Hvar.