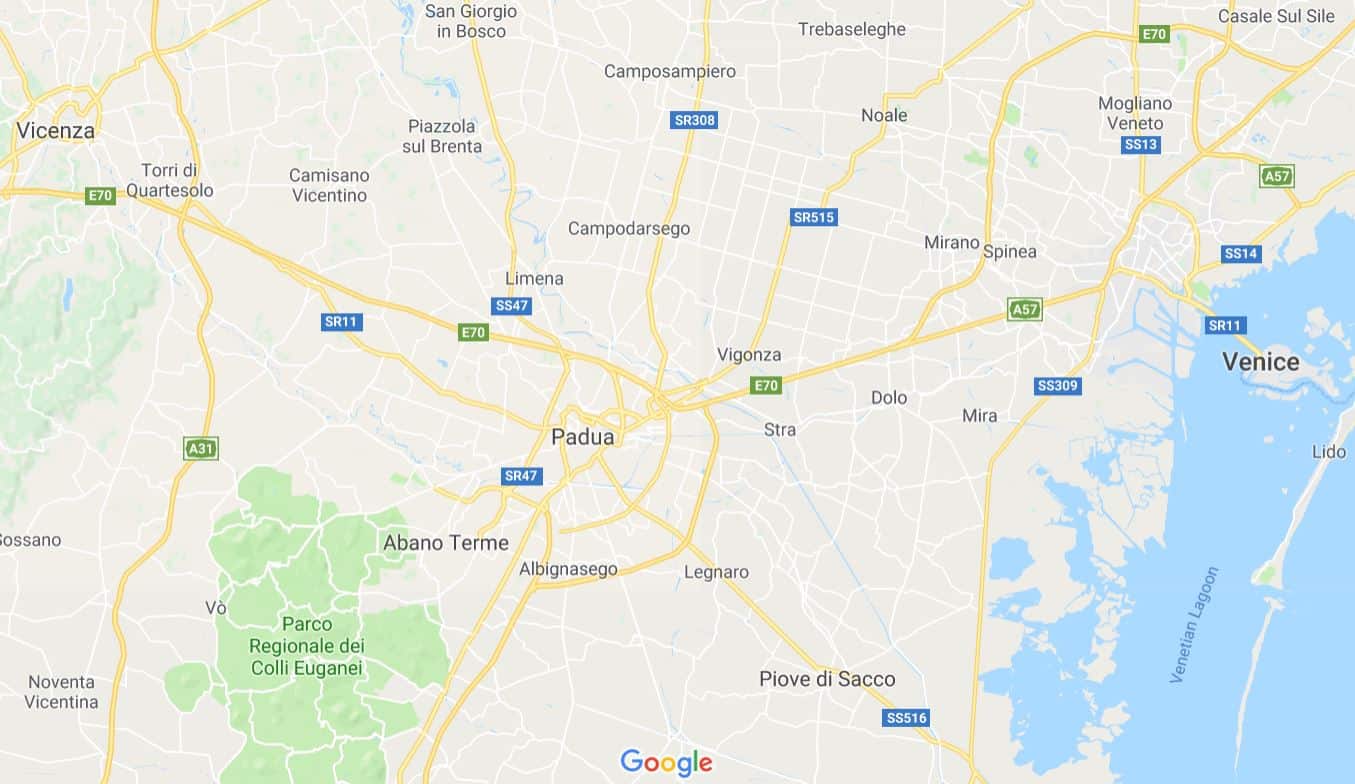 It was a beautiful, sunny morning as we boarded the 0920h train toward Venice, and after about an hour, we stepped off the train in Padua with no specific plan of action. It didn’t take us long to realize that by allocating only a day-trip to the city, we had bitten off more than we could chew. So, we decided to walk around the city center and just take it all in and pop into any place that pulled at us in and was open. 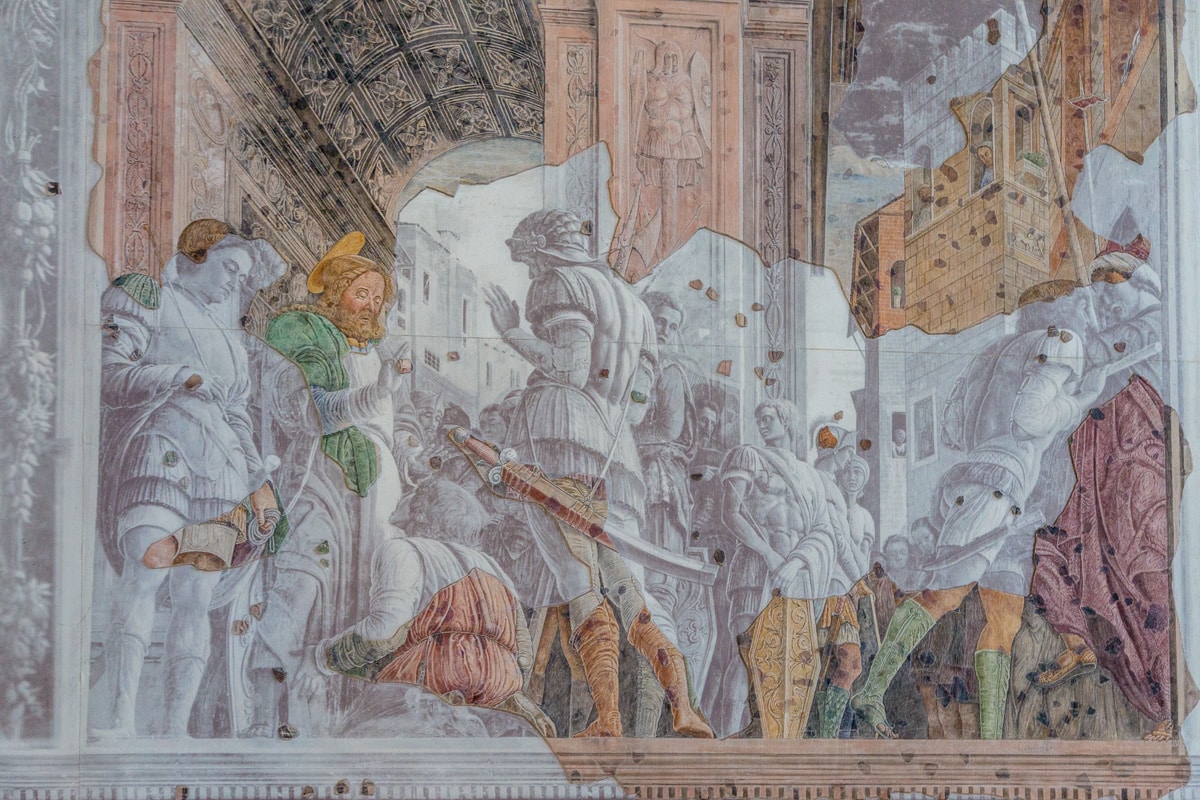 Making our way toward the city center, we stopped first at the Chiesa degli Eremitani, or Church of the Hermits, a 13th century Augustinian church. It was built in 1276 and dedicated to the saints Philip and James. It was here we learned of a 1944 Allied bombing raid that demolished the extraordinary 1448–57 frescoes by Andrea Mantegna, considered by some art historians to be Italy’s biggest wartime cultural loss, but after half a century of painstaking restoration, about 10% of the works have been  pieced back together. 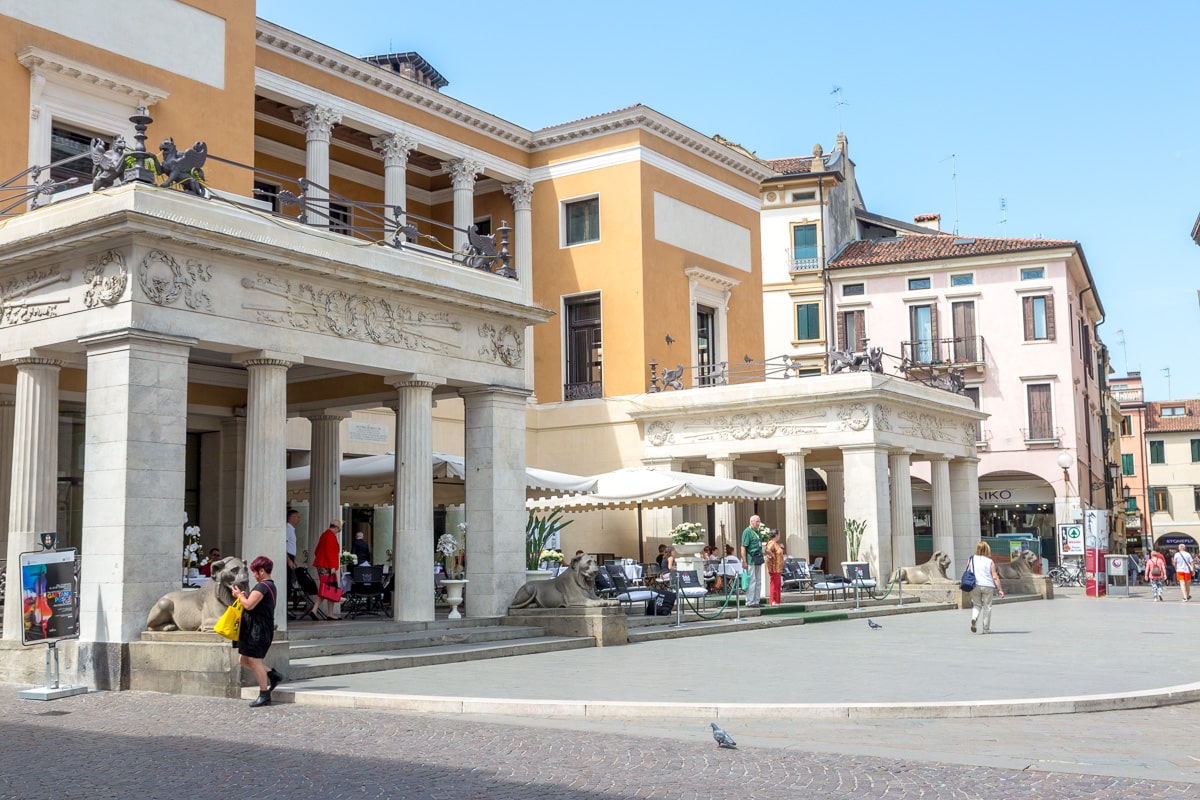 As we reached the city center, we were greeted by large bustling piazzas , grand buildings both ancient and modern, streets with vast porticoes, splendid churches, museums, shops, and many restaurants and cafes.

Two wonderful, large plazas, Piazza delle Erbe and Piazza dei Frutti, bound the Palazzo della Ragione (Ragione Palace) an impressive medieval, fresco-filled civic building with a ground floor, indoor food market. A bustling, outdoor market was being held on Piazza delle Erbe the day we were there, and the selection of fresh and colorful vegetables and fruits was beautiful. 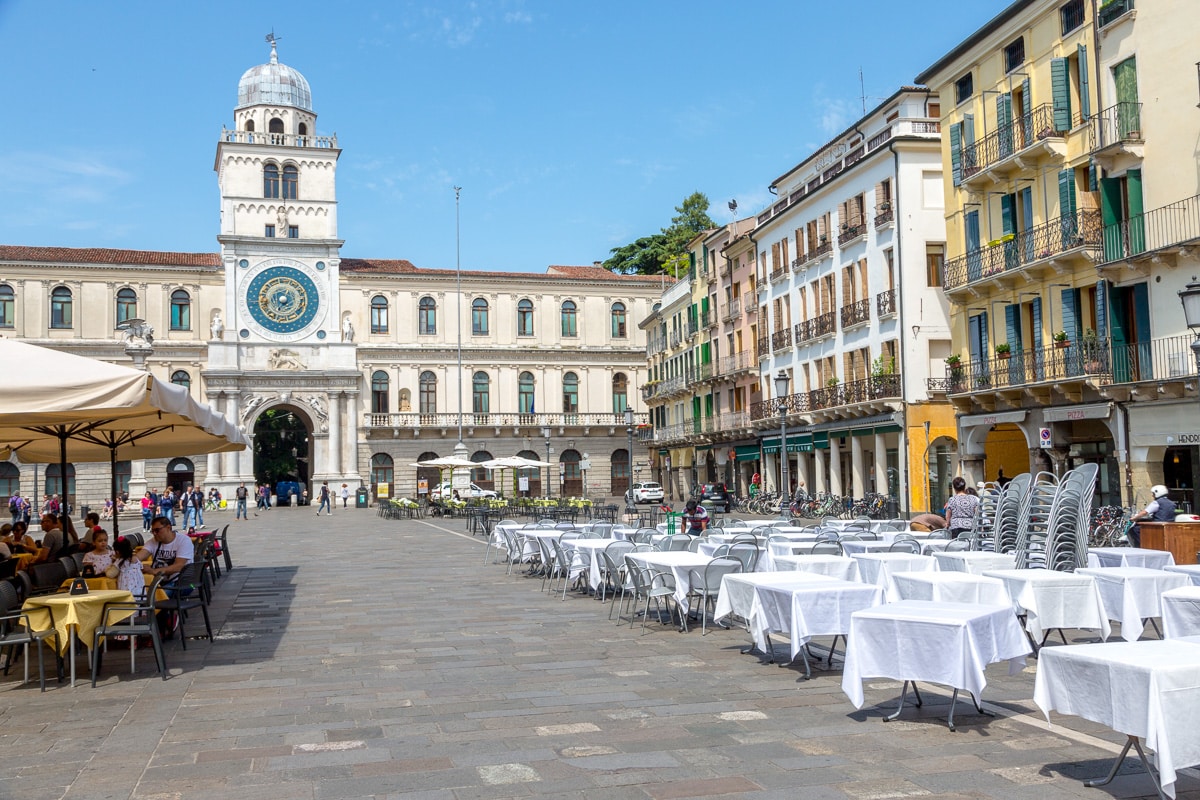 Not far away was the Piazza dei Signori, a picturesque 14th century public square built on the site of the “Palazzo della Signoria“. The square was suited to the meetings and walks of the nobles of the day, as well as courtship, concerts and festivals.

A landmark 15th century clock tower situated over a triumphal arch, beautifully dominates one end of the piazza. Its beautiful astronomical clock, originally built in 1344, was damaged by a fire and had to be replaced in 1436. 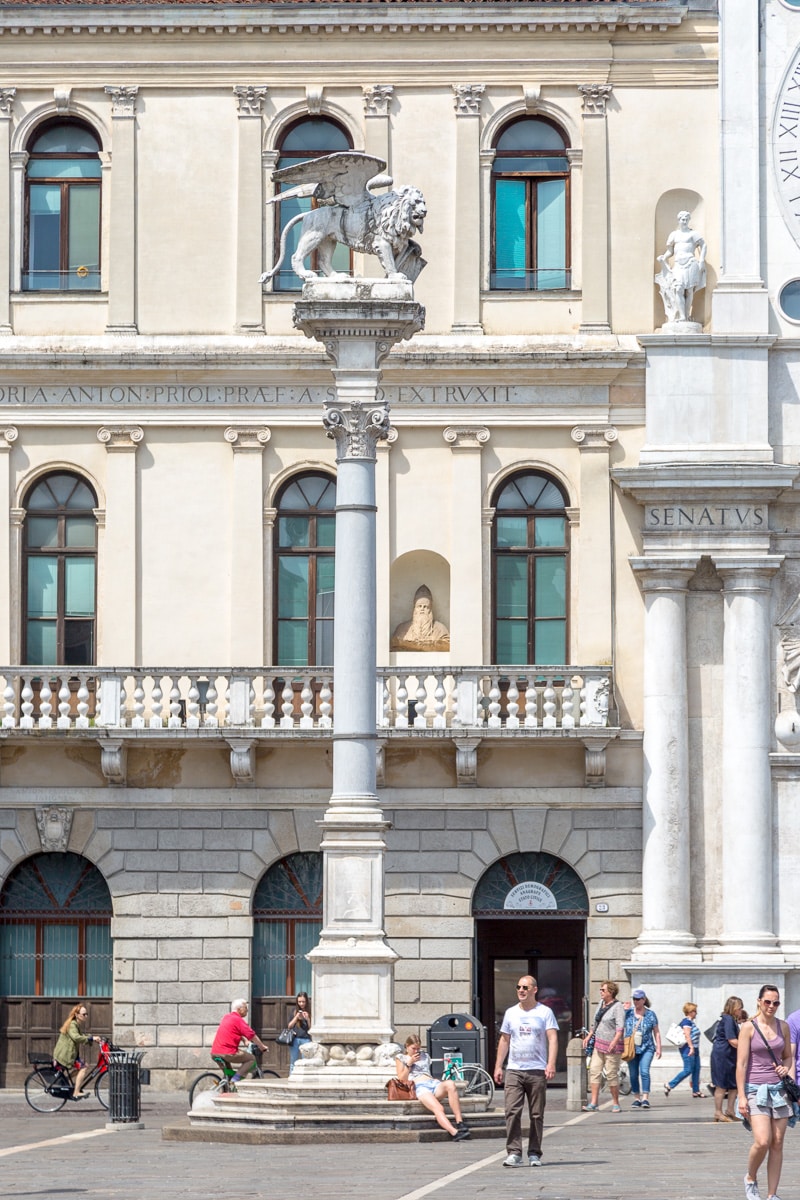 Obviously, Padua is an ancient town. It was founded between the 11th and 10th centuries BC, and claims to be the oldest city in northern Italy. During the northward expansion of the Roman Empire, Padua was gradually assimilated around the 3rd century BC. By the end of the 1st century BC, Padua seems to have been the wealthiest city in Italy outside of Rome.

Being a wealthy city had its complications. During the ensuing centuries, Padua fell victim to the Huns, and then was savagely sacked by Attila in 450. Still later it fell under the control of the Gothic kings Odoacer and Theodoric the Great, then the Byzantine Empire, again seized by the Goths, then the Lombards, and so on, until at the beginning of the 11th century the citizens established a constitution.

Over the next century they were engaged in wars with Venice and Vicenza. But after 1256 Padua enjoyed a period of calm and prosperity. Padua then came under the rule of Venice in 1405, and mostly remained that way until the fall of the Republic of Venice in 1797. 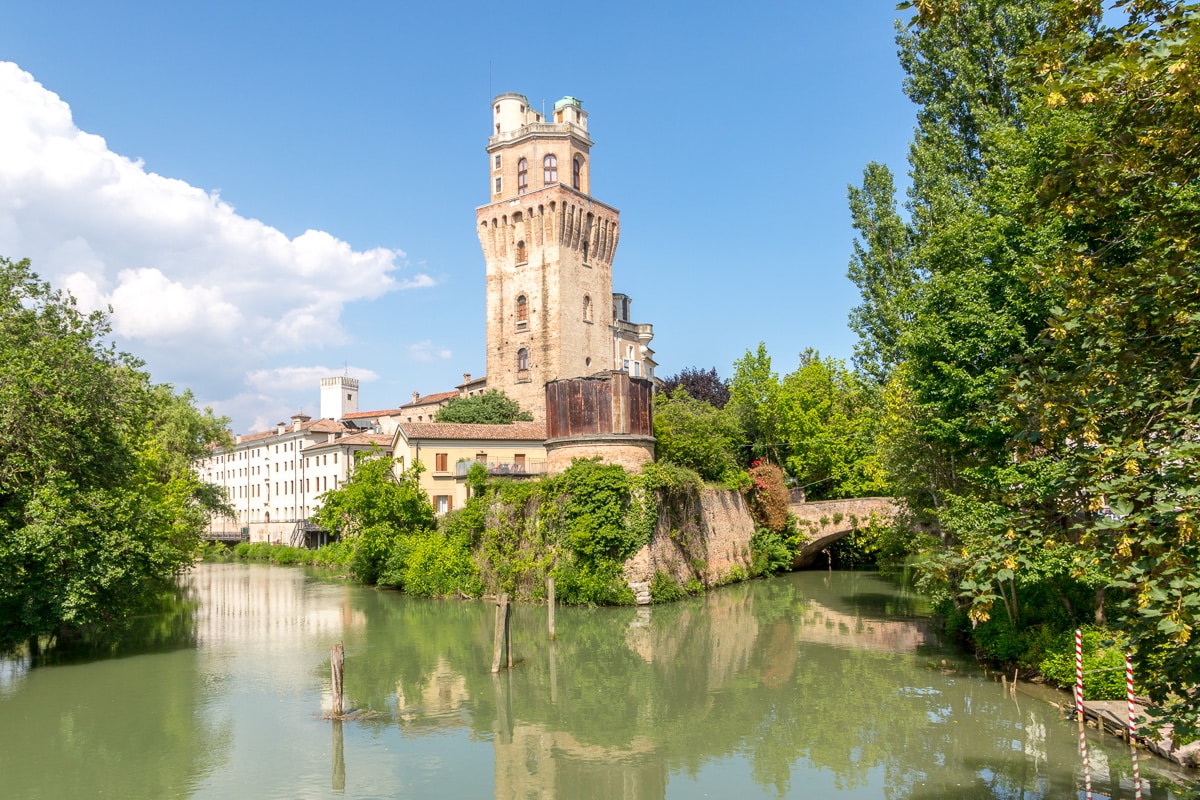 The University of Padua founded in 1222 was the second university in Italy, and is the world’s fifth-oldest surviving university. Today it has around 60,000 students who contribute a vitality and energy to the city.

One of the most famous people associated with the University of Padua is Galileo Galilei (1564–1642). Physicist, mathematician, astronomer, and philosopher, father of modern science, Galileo came to Padua In 1592, where he taught geometry, mechanics, and astronomy until 1610. During this time he worked on a variety of experiments, including the speed at which different objects fall, mechanics and pendulums. 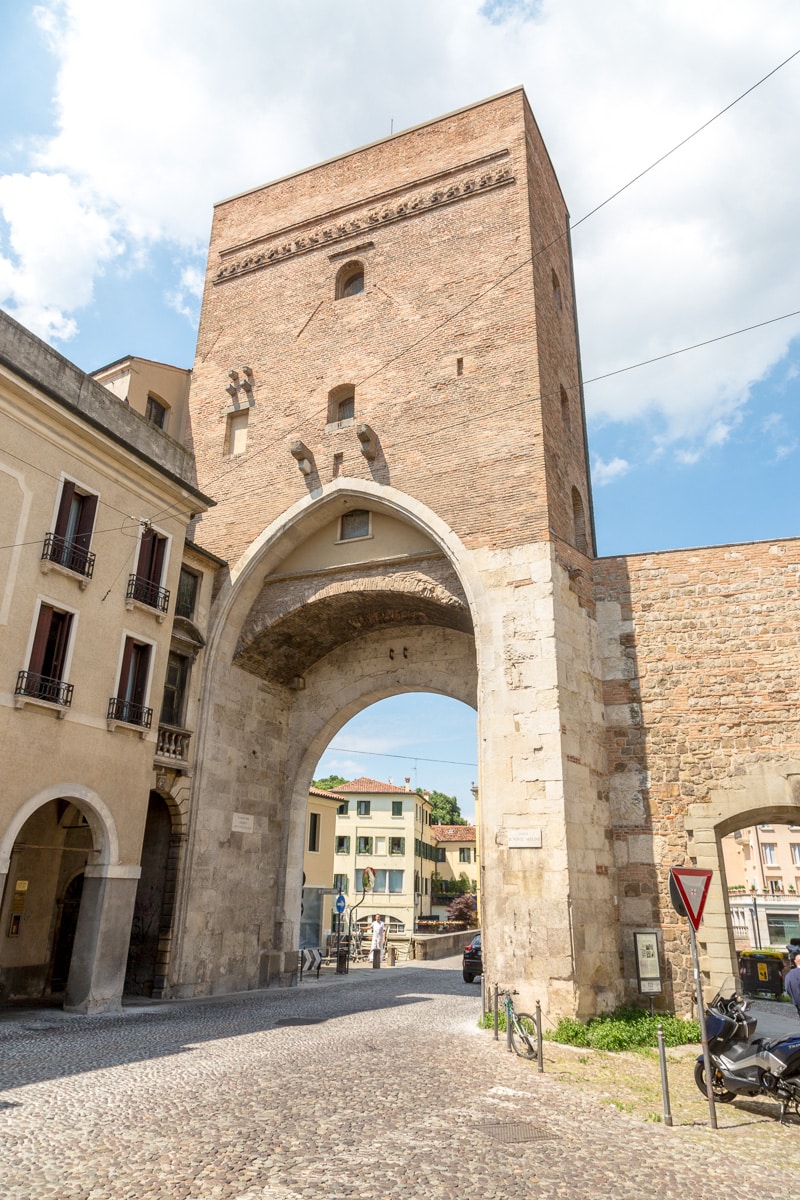 It was while he was here that, in 1609, Galileo heard about the invention of the telescope in Holland. Having never seen an example, he constructed his own telescope and made many important astronomical discoveries. These included mountains and valleys of the moon, sunspots, the moons of planet Jupiter and the phases of the planet Venus.

As we wandered, we came across the Porta Ponte Molino, a gated tower in the city walls with a plaque stating, “ Da questa torre GALILEO molta via de cieli svelo” (From this tower Galileo found many streets in the sky)’. It is said that that it was from this tower that, with his telescope, Galileo first saw the four moons of Saturn. 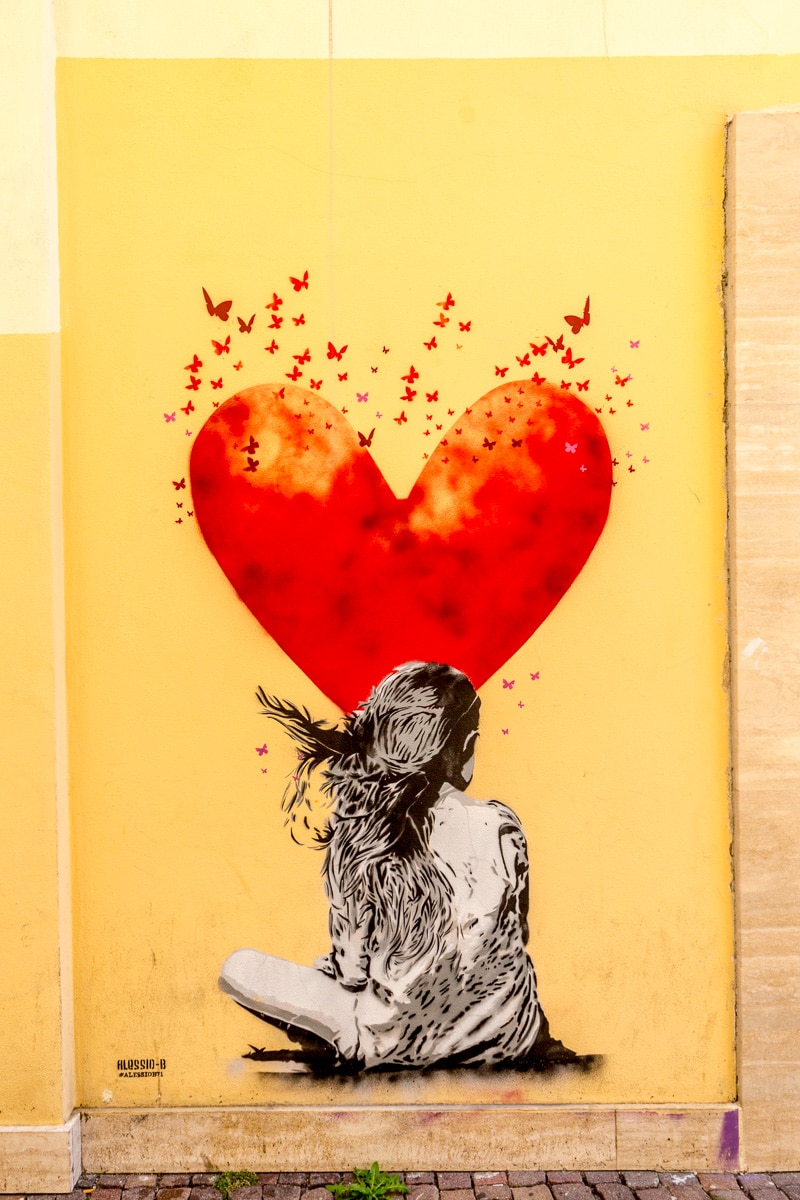 It was at some point during our explorations that we located a small, very off-the-beaten-path, restaurant – A Banda Del Buso. Kathy (my brother’s wife) had chosen it during her research, and it turned out to be a most excellent choice. Slightly difficult to find, and if you didn’t know it was there, it could have been easily missed. But we were all glad we didn’t miss it, as we had an incredible lunch and lively conversations with the two guys running the place.

We were able to visit several other places during our afternoon in Padua, especially impressive was the 12th century Battistero del Duomo or Padua Baptistery next to the cathedral. The exterior gives no clue to the splendor of the interior. There you can find one of the most important fresco cycles of the 14th century, a series of masterpieces by Giusto de Menabuoi. 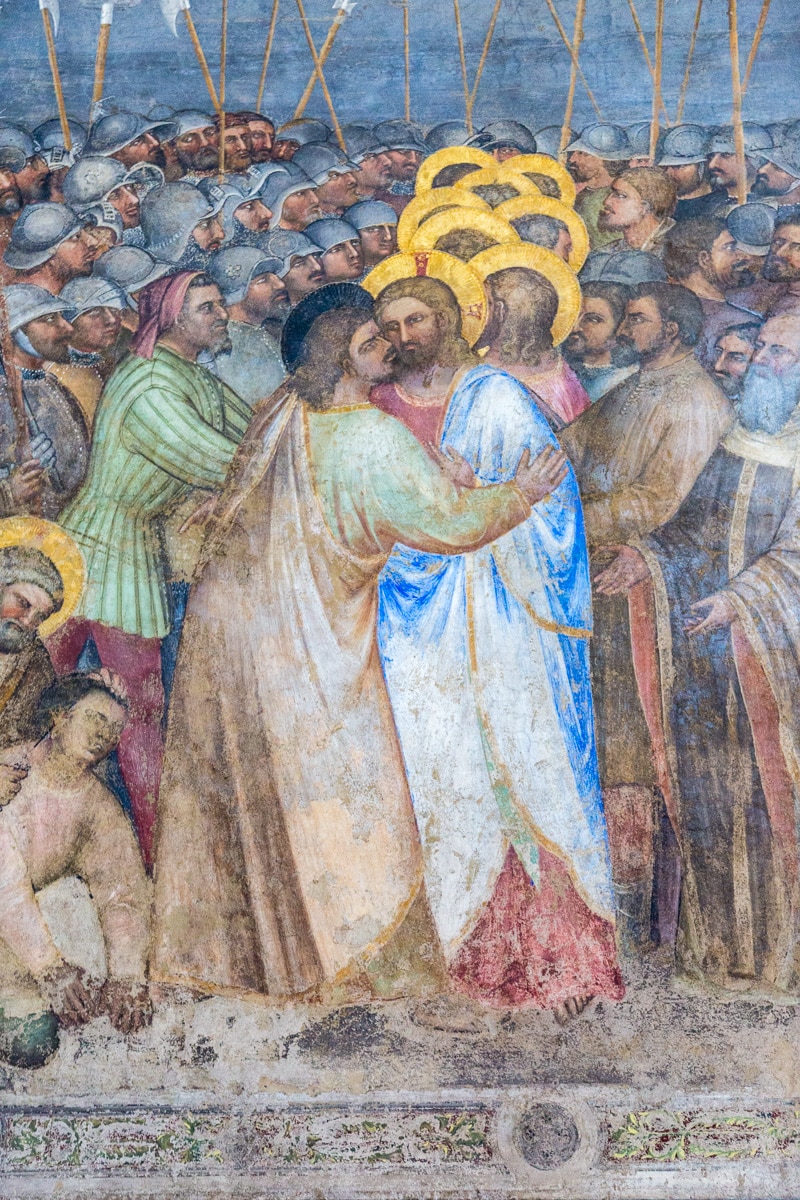 The relatively small space is filled with scenes from the Old and New Testament, and the partial restorations of the 20th century provide a glimpse of the vivid colors that the frescoes must have originally displayed. It is a stunning place to visit, and it would be a great place for binoculars.

It had been a full day, and even though there was still much to see in this historic and interesting town, it was time to go. We wandered toward the bus stop through more medieval streets, past the historic Synagogue, built in 1584, and then on to the train station via a bus.

We still had enough time for some cool drinks near the station before we took the train back to Verona. The day had been good, but Padua really deserved more time.