Although we enjoyed being back in Florida amongst family and friends, and warm weather, the desire to return to our adventure called very strongly. Our return this time was through Scandinavia.

The flight from Orlando left about midnight, so we were more or less ready to get some sleep while in the air. We had decided to fly Norwegian Air since the one-way fares for their premium seats were pretty reasonable, and it was indeed comfortable. 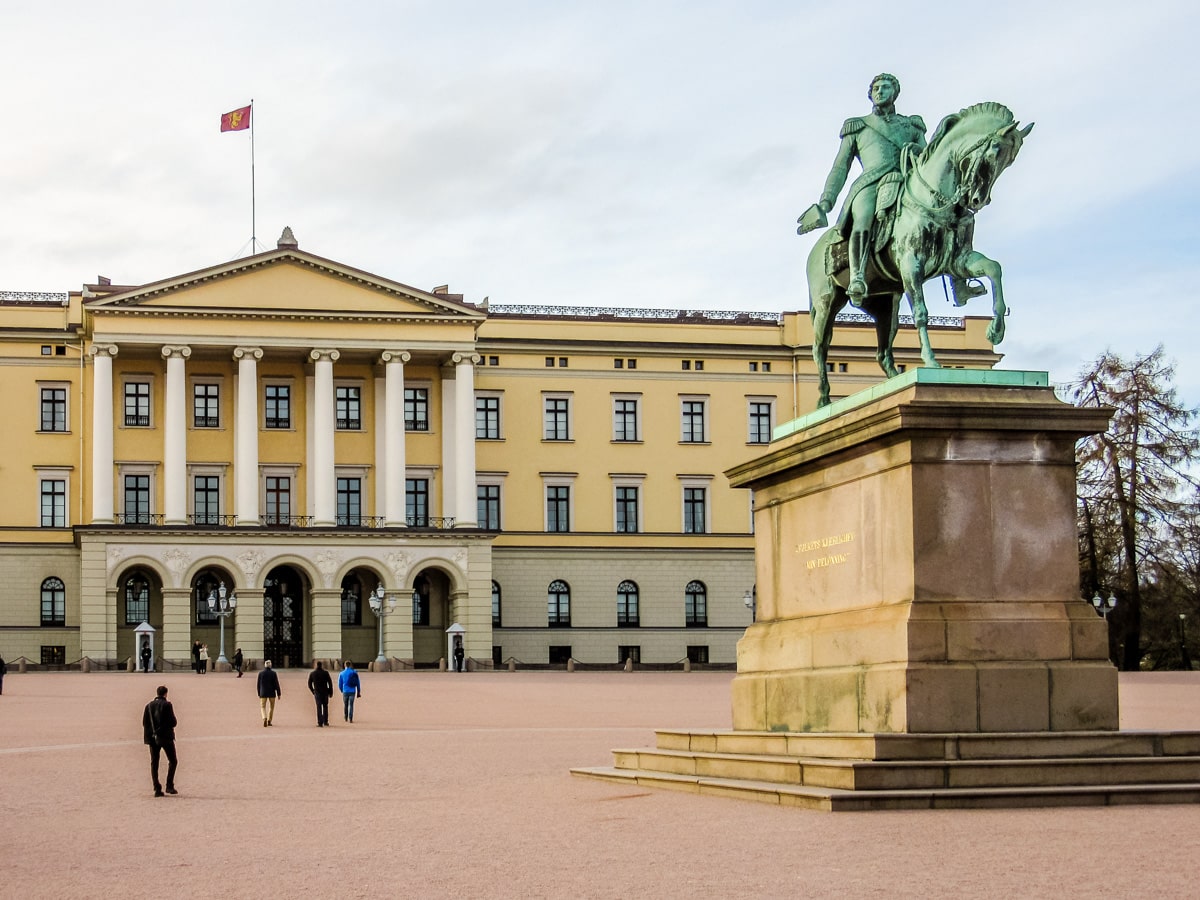 Arriving in Oslo, Norway we were able to get checked into our room at the Hotel Saga promptly and get out to explore. It was a good afternoon, albeit a little cold. Stopping at a little cafe near the Slottsparken or Royal Palace Park, we enjoyed a hot drink and a shared a pastry before venturing further. We walked a portion of the shopping street where Jeannie practiced her window shopping.

Further along we walked through the Royal Palace Park where locals were out in force enjoying the early spring weather. The first green sprouts of tulips and other bulbs were already pushing up through the soil preparing to send their flowers skyward over the next few weeks. Other earlier blooming spring flowers were just beginning to add their color to the landscape. The branches of the trees and shrubs were already beginning to show their swelling green buds, preparing for warmer days ahead. 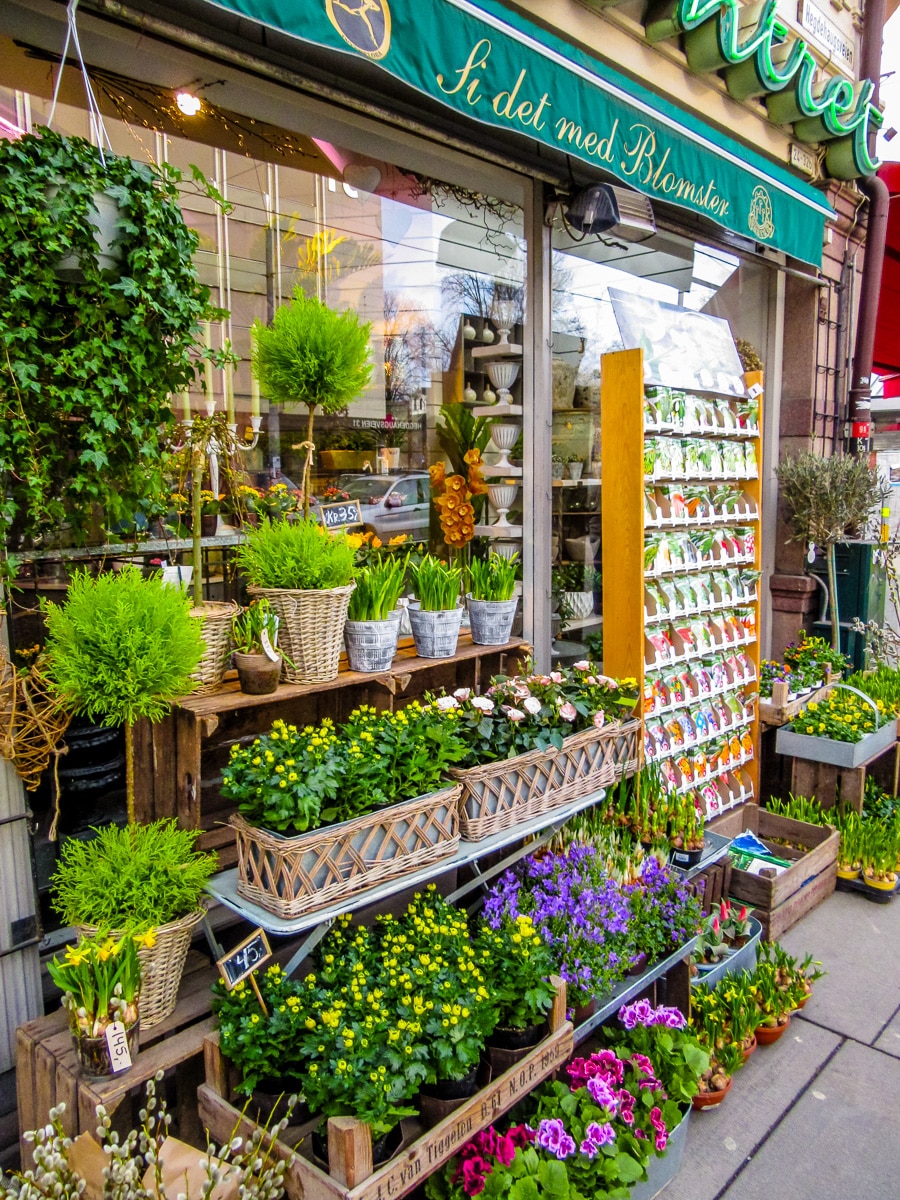 After a time, we returned to our hotel and prepared to go out to dinner. The internet provided a number of options in close proximity to our hotel, most were less than a 15-minute walk away. We chose a small place down a side street, and it was a good choice. “Rust” was friendly and hip with a reasonable volume level that lent itself to a light, casual dinner. Afterwards, we returned to our room to sleep away the jet-head of the morning’s journey.

For some reason we woke early, and curiously looked out the window where we saw … SNOW? Though it wasn’t totally unexpected – the weather was in the forecast – we were surprised nonetheless. I mean, who believes weather forecasts? 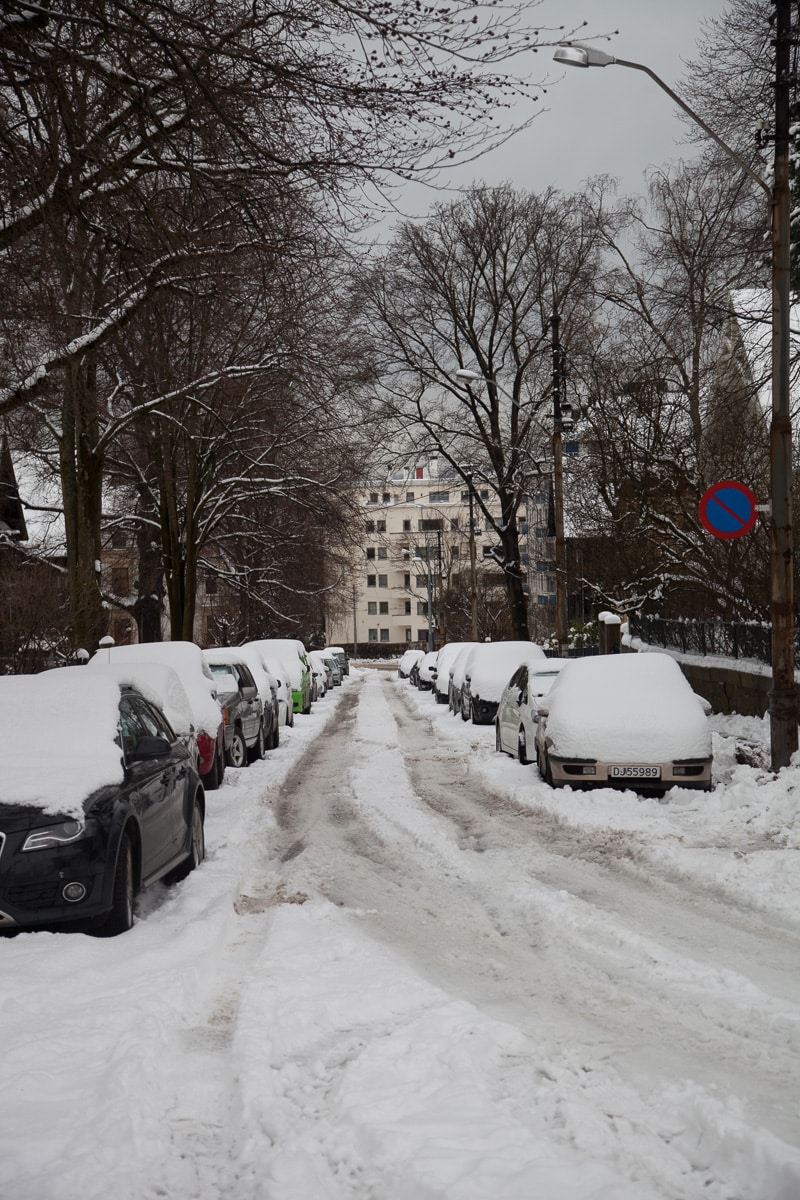 So, it was snowing, there was nothing we could do about it, and it was too early to get up anyway. So we returned to the dream world we left. Later, when the hour was more reasonable, the opened curtains revealed even more snow. And it kept snowing, harder and harder until everything was wearing a thick layer of the cold white stuff. The streets disappeared, trashcans were lost, and cars became large lumps of white with little to belie what was underneath.

Not having to venture out for breakfast was a good thing, and as we stopped at the front desk on our way back to our room, we were told that the amount of snow was unusual, even for Oslo. In fact, it was so unusual that the city was pretty much shut down. The public transportation system was at a standstill, taxis weren’t running, trains were stopped and the airport was shut down for several hours. And the snow continued.

We watched a man across the street shovel snow off of the driveway multiple times before I think he gave up. And still the snow continued.

One would think that Oslo would be ready for such occasions yet the city was, um, frozen. Someone told us that it had been at least three years since this amount of snow had fallen so quickly in Oslo. They regularly have snow over an average winter, just not such a large amount all at once. 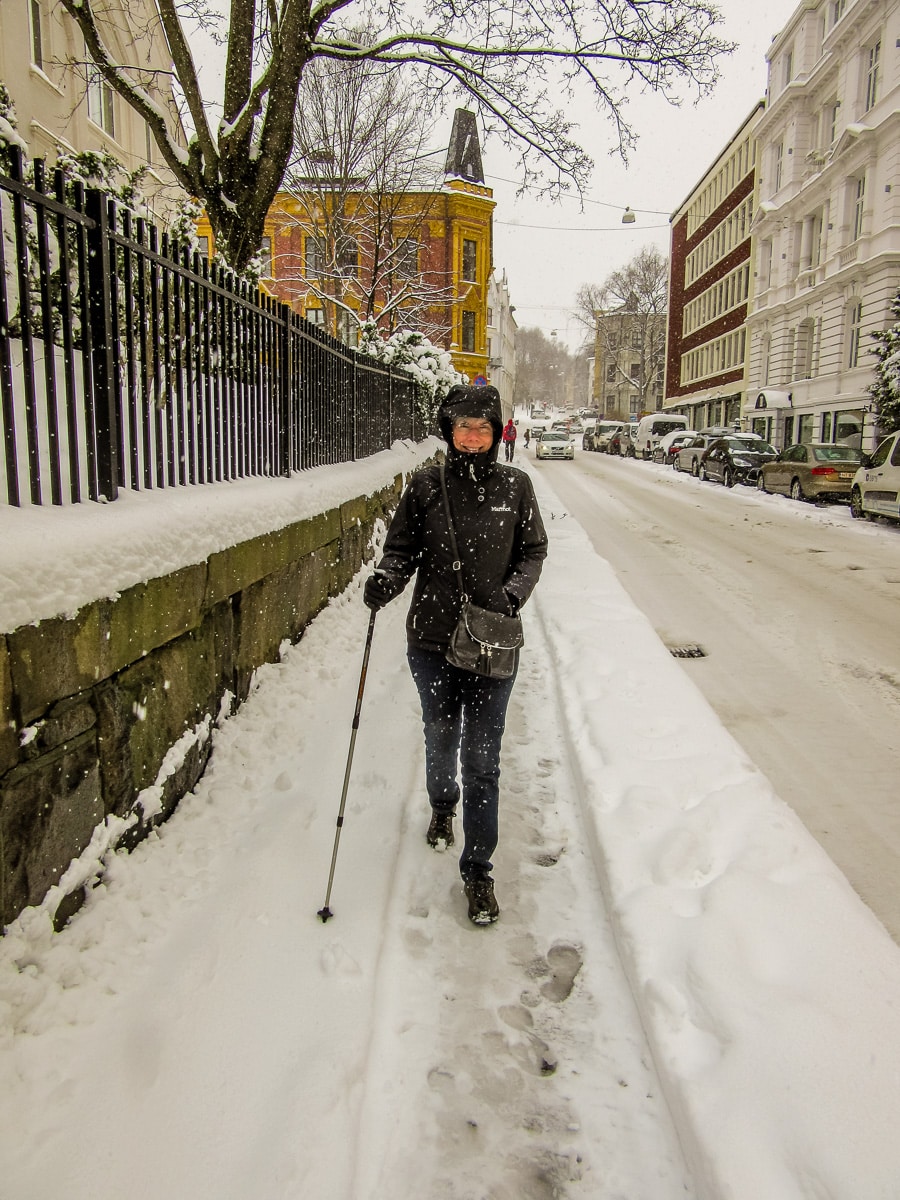 It was just before noon when it appeared that the snowfall might be lessening and it was time for us to “embrace the day,” “be here now,” and go out for a walk … and lunch.

So we bundled up in multiple layers, got out the hiking poles, and took off for an afternoon in Oslo. We walked cautiously, since as Floridians we haven’t developed the fine skills of slipping and sliding on snow and ice covered sidewalks. Along the way we stopped by a travel shop called “Nomaden”. We purchased a couple of accessories, and the kindred spirits inside recommended a local restaurant where we might find some traditional Norwegian food at a place called “Lorry”.

After a good local beer and a couple of open-face sandwiches (smoked salmon, shrimp and caviar for me, and ham, earthy local cheese and arugula for Jeannie) we began the trek back to the hotel. There was a little more traffic beginning to move about, and public transportation was once again transporting.

Back at the hotel, I was interested in walking more but Jeannie, still cautious from her tumble in Rome and nursing the remains of a cold, decided to stay in. 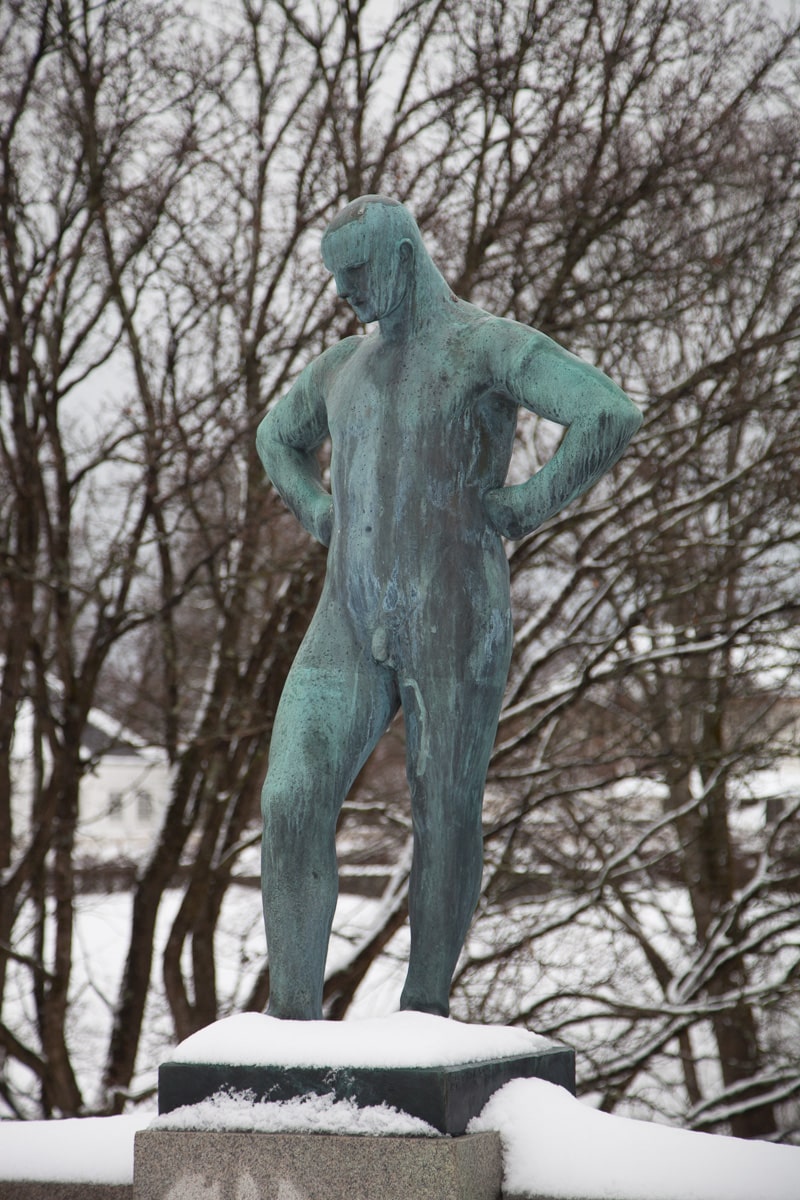 So grabbing my camera I set out for Frogner Park and its famous Vigeland Sculpture installation, that was not too far away and might be interesting covered in snow. Along the way, there was thick snow everywhere, yet the sidewalks were well pressed down by earlier pedestrian traffic.

The park was about a 20 minute walk away, yet took longer as I marveled at the various designs and shapes that the brief yet intense snow storm had left. Arriving at the park I found a landscape of black branches and tree trunks set against the stark white of the snow that covered the ground and most of the upper surfaces of every exposed surface.

Of course, everyone in the United States north of the Florida state line is saying, “Yeah, one snowfall, and Chris gets all poetic and artsy. Let me tell you about the time … blah, blah, blah.” Well, I can sympathize with those who live with snow on a regular basis, but it was beautiful. 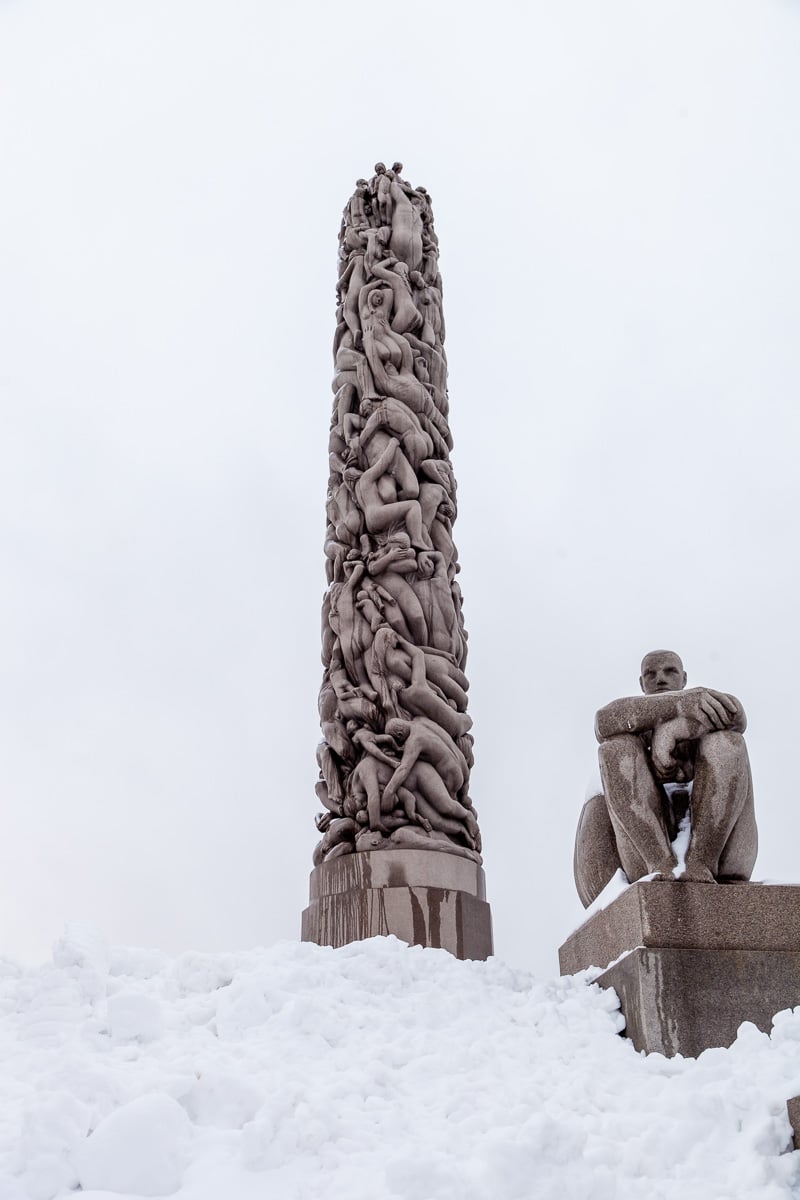 The sculptures in the park were delightfully interesting as well. They are all the work of one artist, Gustav Vigeland, who, between 1906 and 1947, carved in granite or cast in bronze the 212 statues all based on the theme of the “circle of life”. The installations cover 80 acres (320,000 m2) and culminate at the Monolith Plateau. It is a platform surrounded by stairs and dozens more sculptures, and at the center the Monolith soars 14.12 meters (46.32 ft) high and is composed of 121 human figures rising toward the heavens.

The walk back to the hotel was equally interesting, though my route this time, was through more of a business district with shops and stores rather than neighborhoods with apartments and homes. By now the traffic had been steadily increasing, the snowplows had been shoving the now dirty street-snow to the sides of the streets. The brown icy slush required a different cautiousness as I crossed the numerous roads on the way back.

Later that evening we ventured out again to go to dinner at a local tapas deli, where we had a delicious light meal. Though the walk was icy, we were warmed by a good meal and drinks as we made our way back to our room for a good night’s rest before our train trip tomorrow to Gothenburg, Sweden where we will meet our good friends Niels and Jette who we last saw in Belgium last October.