This post is a continuation of our adventures in Portugal. Since, due to the Coronavirus quarantine there is more time, it means that I can procrastinate. Just know that there are several more posts yet to come.  We hope that everyone stays safe and healthy wherever you are. Chris and Jeannie 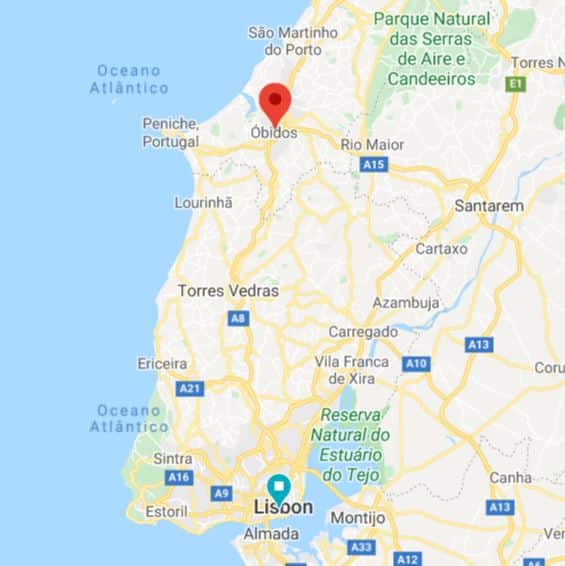 15 October 2019 – The one-hour bus ride from Lisbon was comfortable and scenic, arriving in Óbidos early enough for a full day’s exploration of this charming, historic town.

The area around Óbidos (Obi-doSH), Portugal has been inhabited since the late Paleolithic, and was an important settlement even before the Romans established the civitas of Eburobrittium, a large urban area where the remains of a forum, baths and other Roman structures have been discovered. 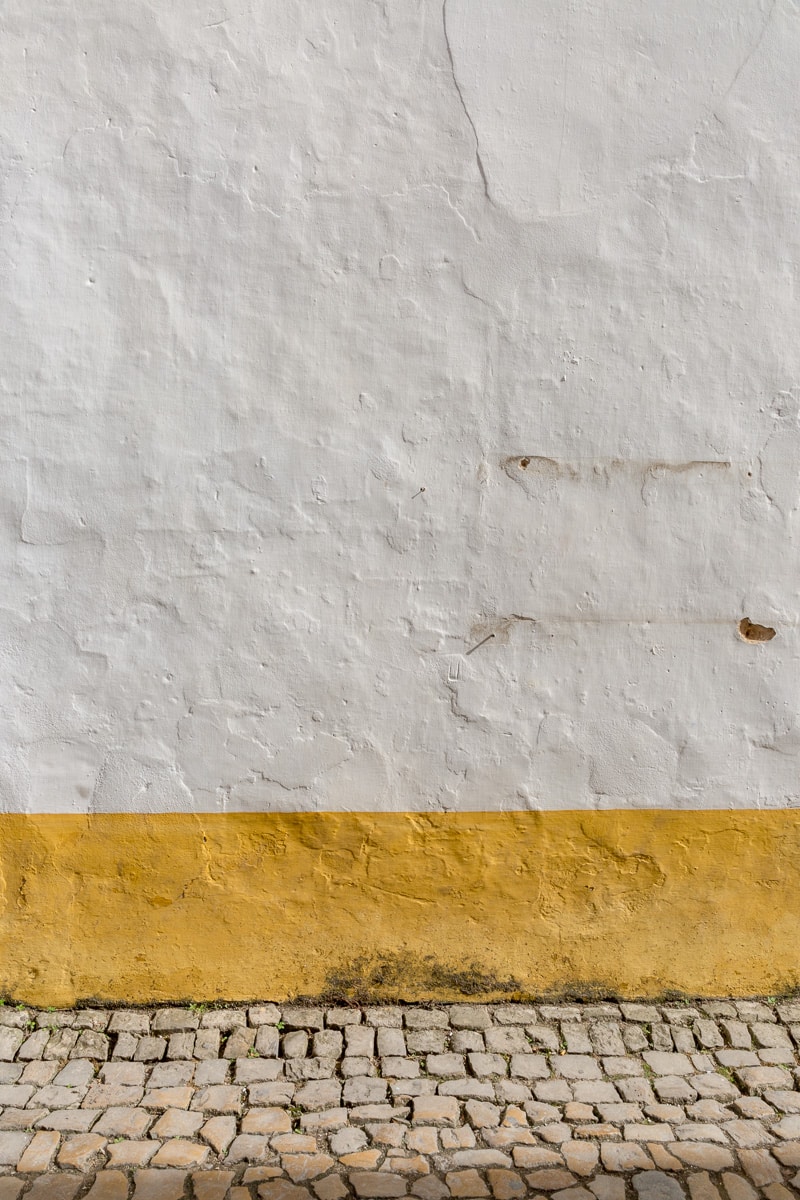 Situated 10 km (6 miles) inland, Eburobrittium was a strategic seaport. However, in the 5th century due to the troubled times associated with the decline of the Roman Empire, as well as the extensive silting of its harbor, it was abandoned for a more defensible, hilltop position – the current Óbidos.

After the fall of the Roman Empire, the region came under the influence of the Visigoths, and then sometime after 713 CE the Moors established their fortifications on the site. The area was later taken from the Moors by the first King of Portugal, Afonso Henriques, in 1148. 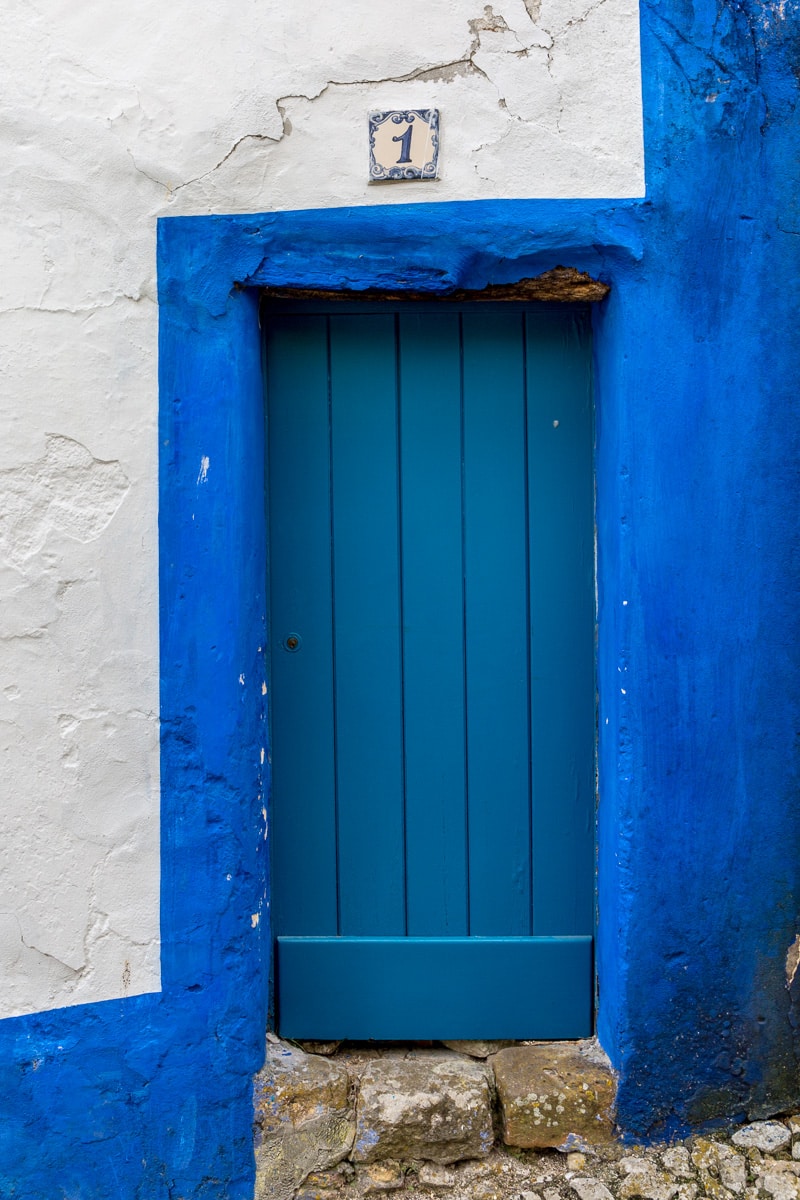 In the 13th century when Queen Isabel de Aragon commented upon the beauty of Óbidos, her adoring husband-to-be, King Dinis presented the town to her as a wedding gift and ever since it has been a destination for couples wishing to tie the knot in a very romantic location.

Since then, Óbidos was frequently patronized by the Queens of Portugal, giving it the informal title of Vila das Rainhas – Town of the Queens.

Today this medieval village is still a pleasure to wander, both inside and outside the city walls. We crisscrossed the little town from one end of to the other, and though Rua Direita, the main street, was incredibly touristy, the true joy of Óbidos was wandering its tiny alleys away from the crowds. 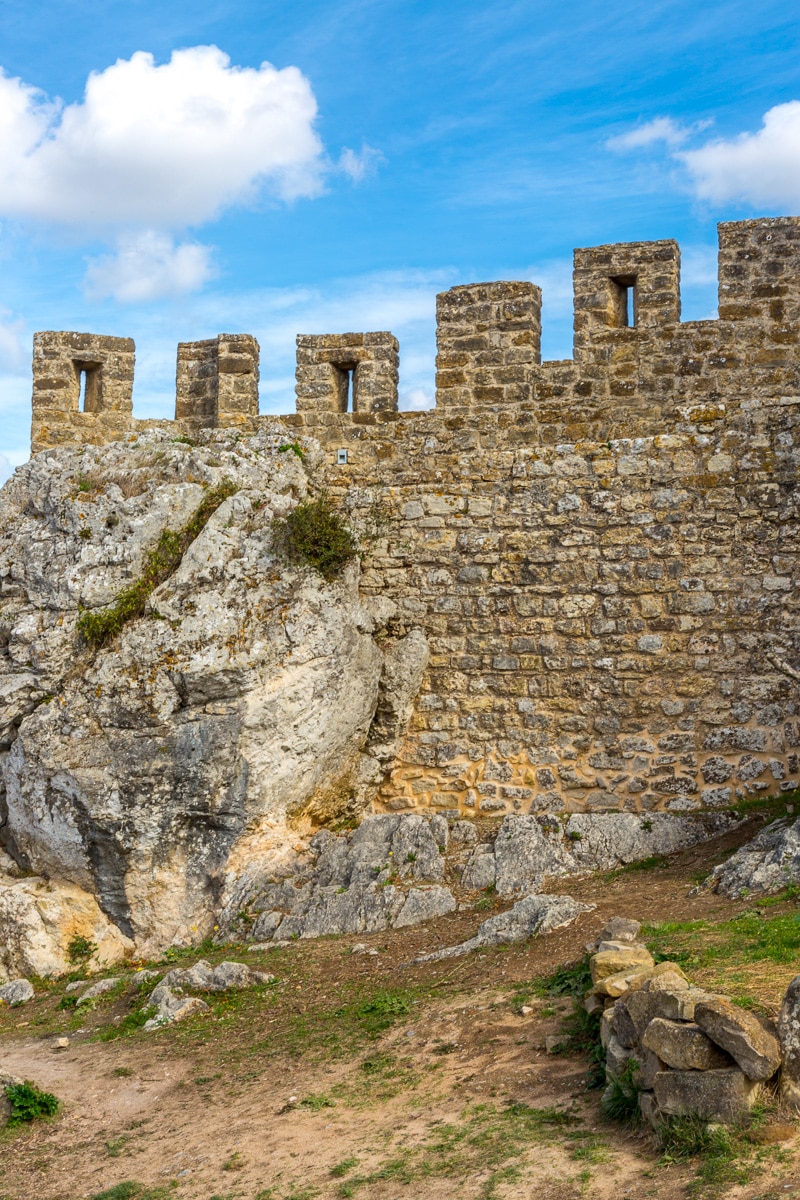 Wandering up on the ancient battlements provided spectacular views of the medieval town within the walls. Turning our gaze outward, the rolling, surrounding countryside was covered with vineyards, fruit trees, and fields.

Outside of the city’s walls, we found ourselves alone. The crowds were content to stay on the main drag, visiting the standard tourist spots. But here, the sounds of the town were replaced by the breeze through the trees and the songs of birds, and we found a bench to take in the glorious view. 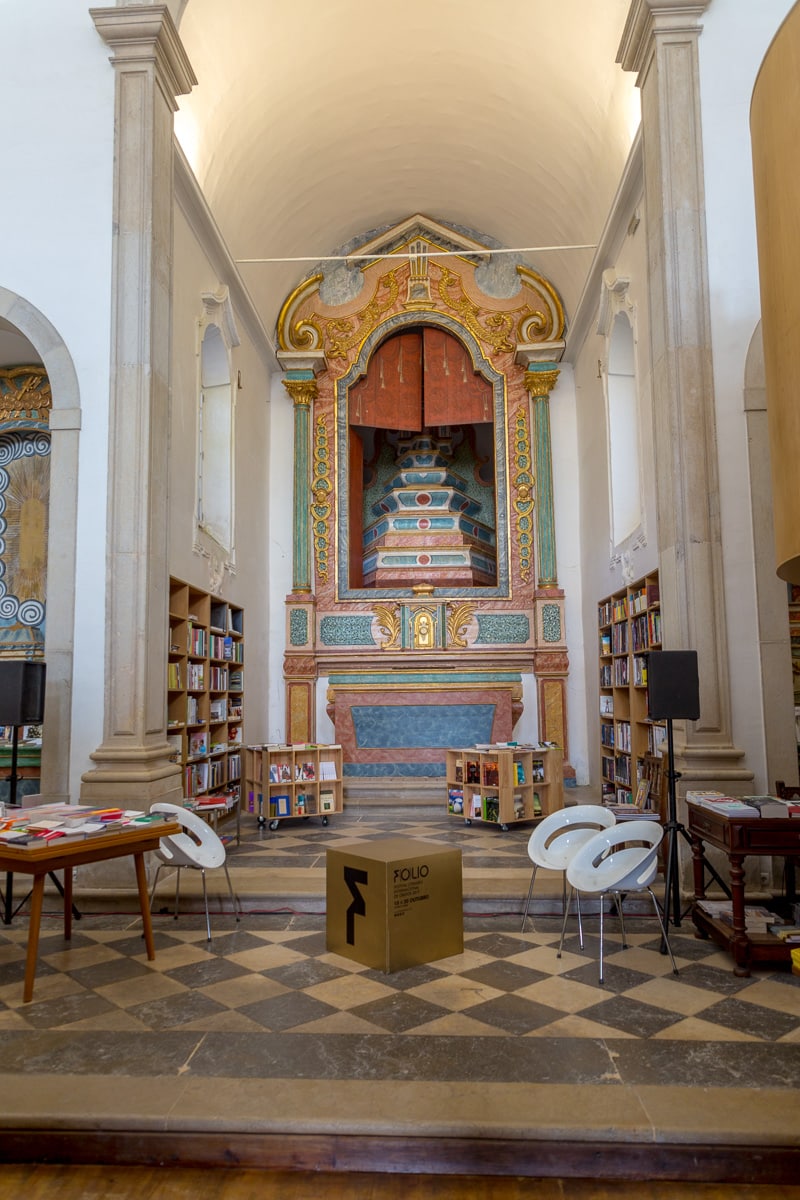 Refreshed, we re-entered the city through the Porta da Estrada da Cerca and shortly came across the Igreja de São Tiago. The original church was built in 1186 by King D. Sancho I to be used by the royal family when they would visit Óbidos. Unfortunately, the church was completely destroyed in the earthquake of 1755, the same disaster that leveled much of Lisbon, but it was rebuilt in 1772.

Over the years, the church was abandoned and fell into ruin. However, literary supporters recognized potential in the structure, and today the former religious building is Livraria de Santiago, a modern bookstore in an ancient space.

As we perused the books (mostly Portuguese, but many in English), I noticed some stairs that led up to the former choir space. It was there that we came across Natália Santos, a “lace poet”, as she calls herself, who weaves beautiful delicate pieces of lace and jewelry in silver bobbin-tatting. As this 70+ year-old lady weaves her art, she also creates poems to accompany each piece.

We were taken by her enthusiasm and friendliness as she described her art, showing us how she creates each piece by hand, and sharing newspaper clippings of her notoriety. And though she spoke little English and we spoke little or no Portuguese, we left having enjoyed taking the time to explore this tiny hidden corner of a bookstore – oh, and Jeannie did purchase a lovely pair of earrings.

After a good lunch at an out-of-the-way little restaurant, we wandered some more on the opposite side of the town, in- and out-side of the walls. Later, after a stop at a cafe for some ice cream, we even took a turn through the cemetery. 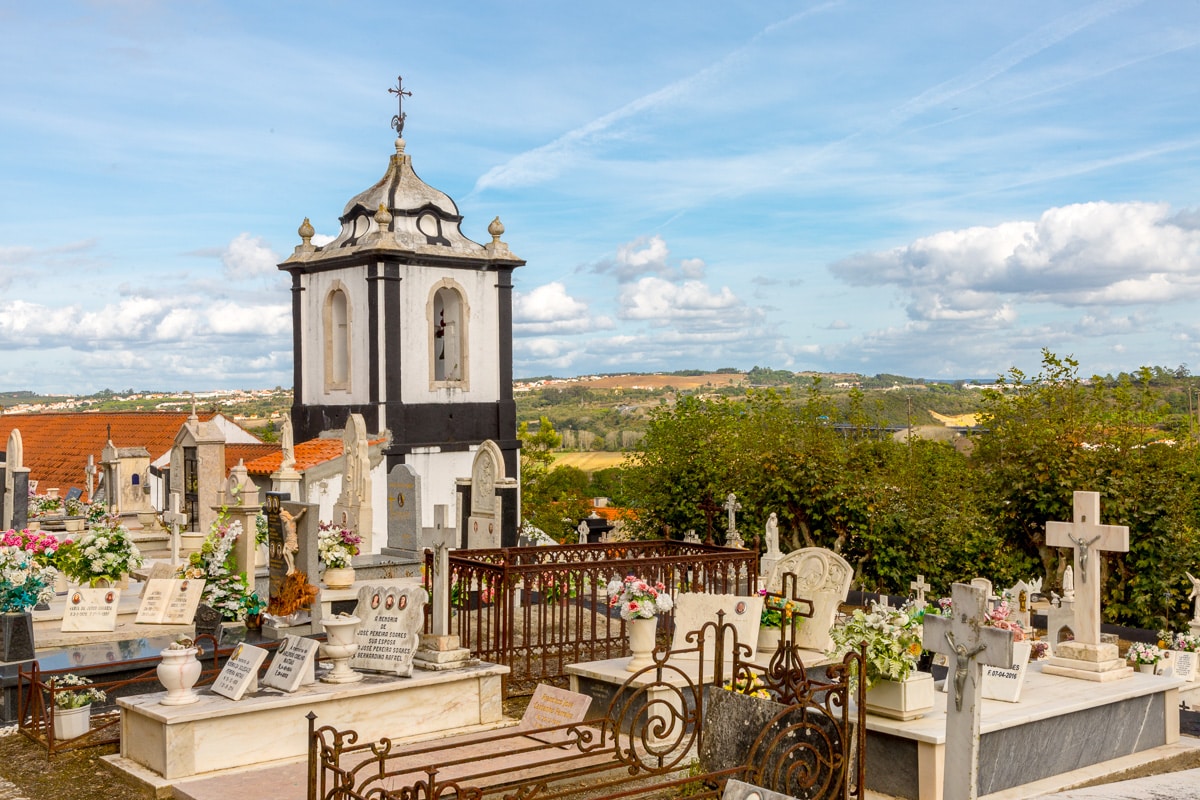 Before long, however, it was time to make our way to catch the bus for our return home to Lisbon, but there was one last stop.

Óbidos is also famous for another thing, Ginjinha d’Obidos! This deliciously sweet cherry liqueur is a local delicacy. Among Portuguese of a certain age, there is also a certain nostalgia as it was often used as a childhood remedy for colds and minor illnesses.

Thus fortified, we were prepared for our return trip. The ride was smooth and our eyes grew heavy …