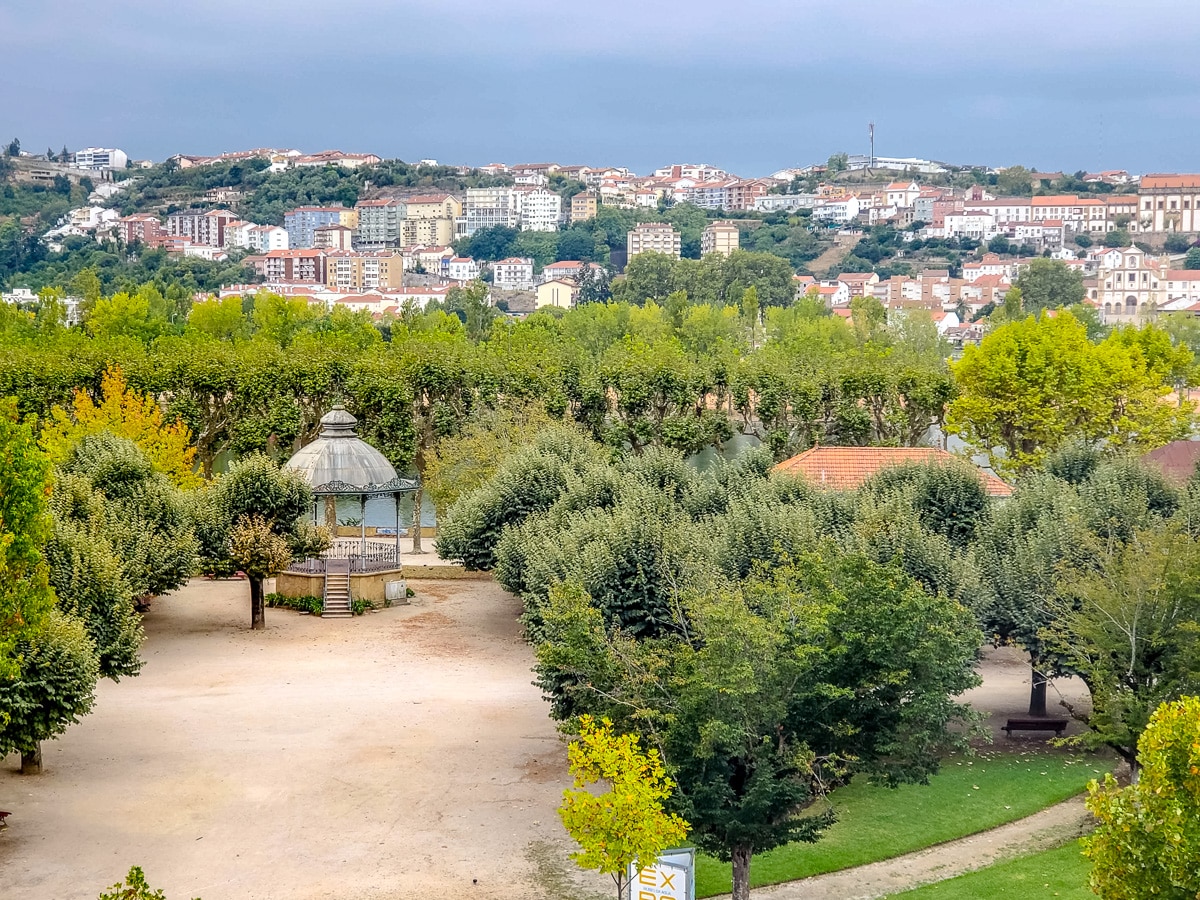 20 September 2019 – Our second day in Coimbra again began cloudy. We had decided to add the hotel’s breakfast buffet, and were glad we did since it was beginning to drizzle, would give us a hearty start before wandering off into the weather.

Roaming off to other areas of town, we stopped into several old, historic buildings and churches, and explored an old cloister, as well as the municipal mercado or market. The light rain was on and off, so we were extra careful about footing on the well-worn, slippery cobblestones.

Our first goal was to get to the Museu Nacional de Machado de Castro. This remarkable museum contains more than 20 centuries of Portuguese history wonderfully curated and presented. 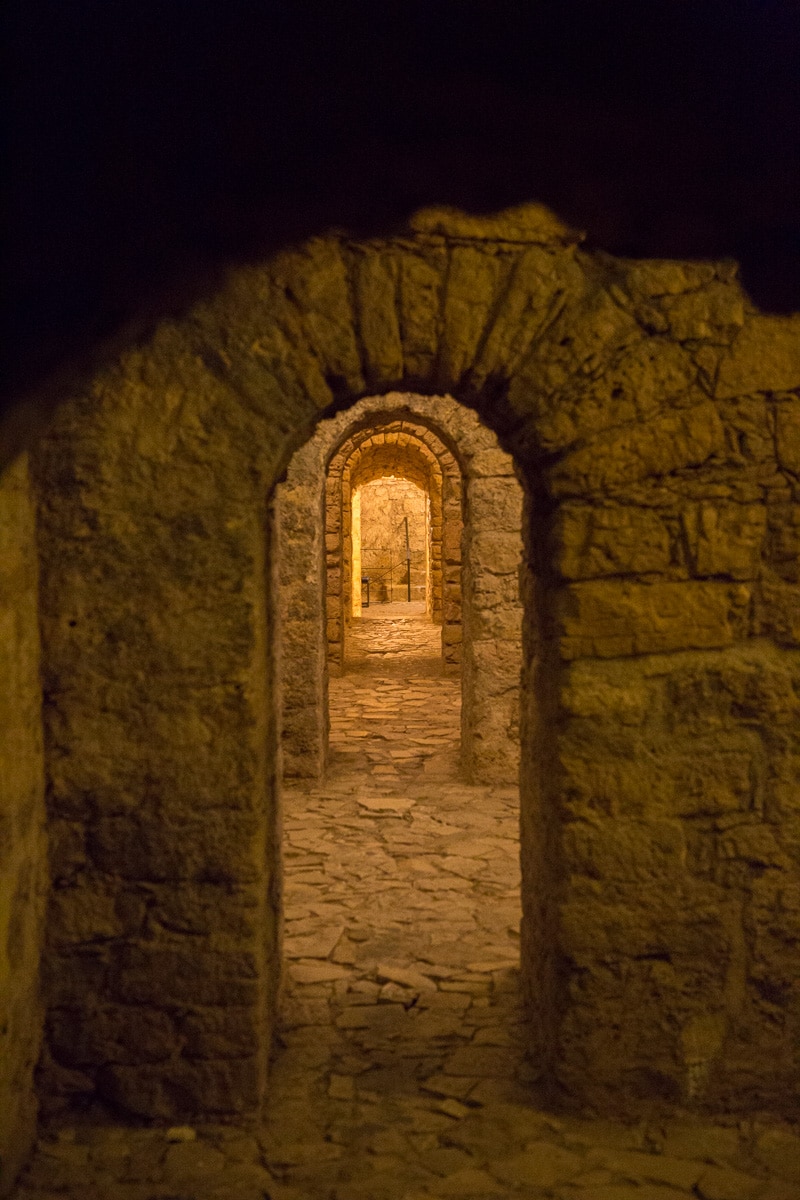 The highlight of the visit was the underground area and archaeological remains of the 1st century Roman city of Aeminium. As we progressed upward from the Roman underground maze of the cryptoporticus, we enjoyed a vast and wide-ranging collection that runs the gamut from Gothic religious sculpture to 16th-century Flemish painting and ornately crafted furniture.

By the time we reached the collection of gold monstrances, furniture, and Moorish-influenced pieces we had to rush so we could get to the University’s Porta Ferria or Iron Gate to meet our tour group. 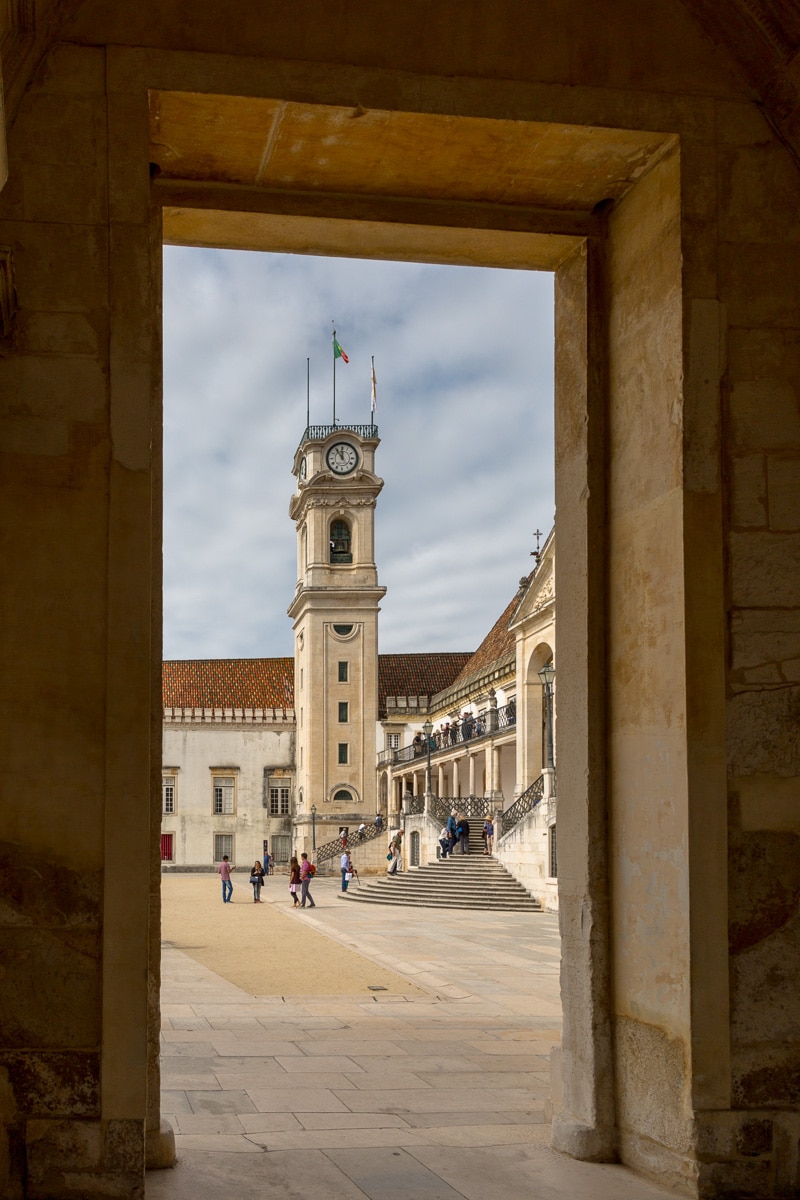 The University of Coimbra was established in 1290 and is the oldest academic institution in the country. The university is also a destination for its monuments and long history, and its historical buildings were listed as a World Heritage site by UNESCO in 2013.

Our first stop was the Paço das Escolas, housed in a former royal palace; this is the historic heart of the university, where traditional academic ceremonies are still held. The main ceremonial hall is the “Sala dos Capelos” the ancient Throne Room dating back to the mid-1600s, and named after the academic cape awarded to graduating doctorate students. As we watched, a doctoral student was undergoing her thesis defense in the ancient hall. 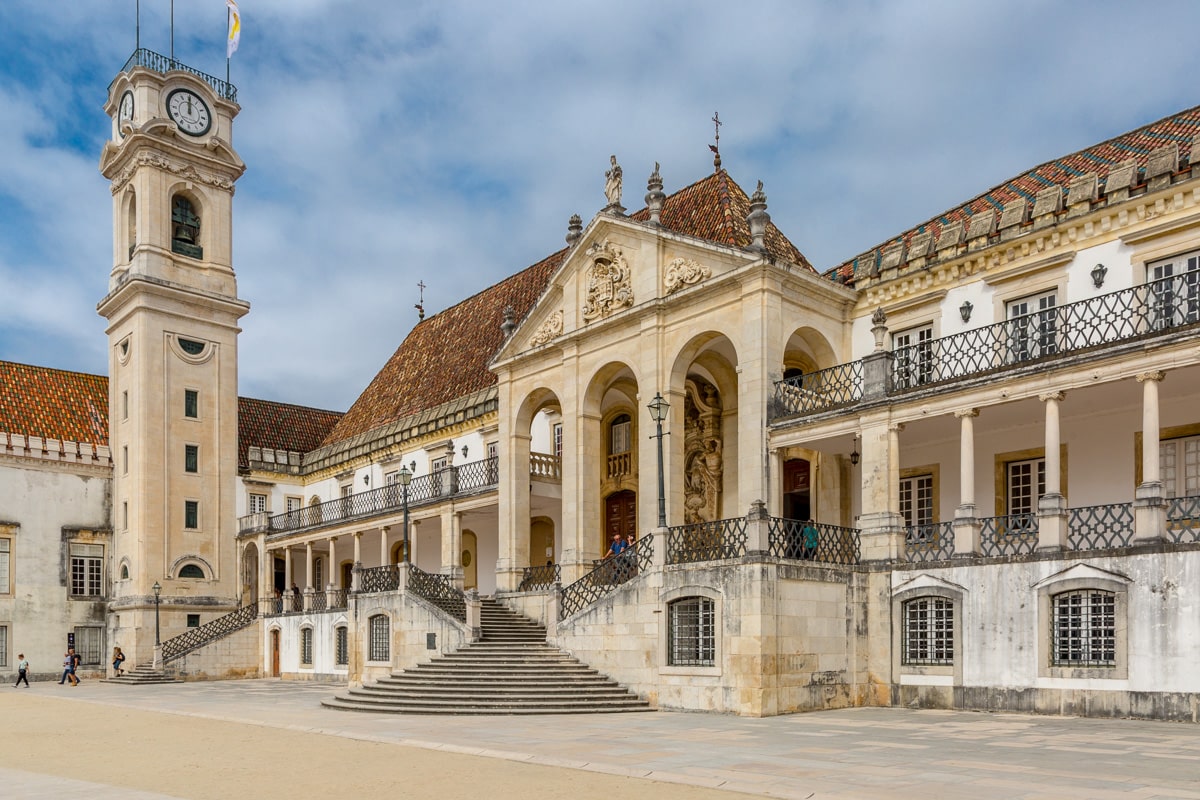 After visiting several other rooms in the Paço das Escolas, we made our way to the Prisão Acadêmica, the former prison for misbehaving students. Sitting in the basement of the Biblioteca Joãnina, it was originally located beneath the Sala dos Capelos, then later moved to the medieval jail beneath the library. 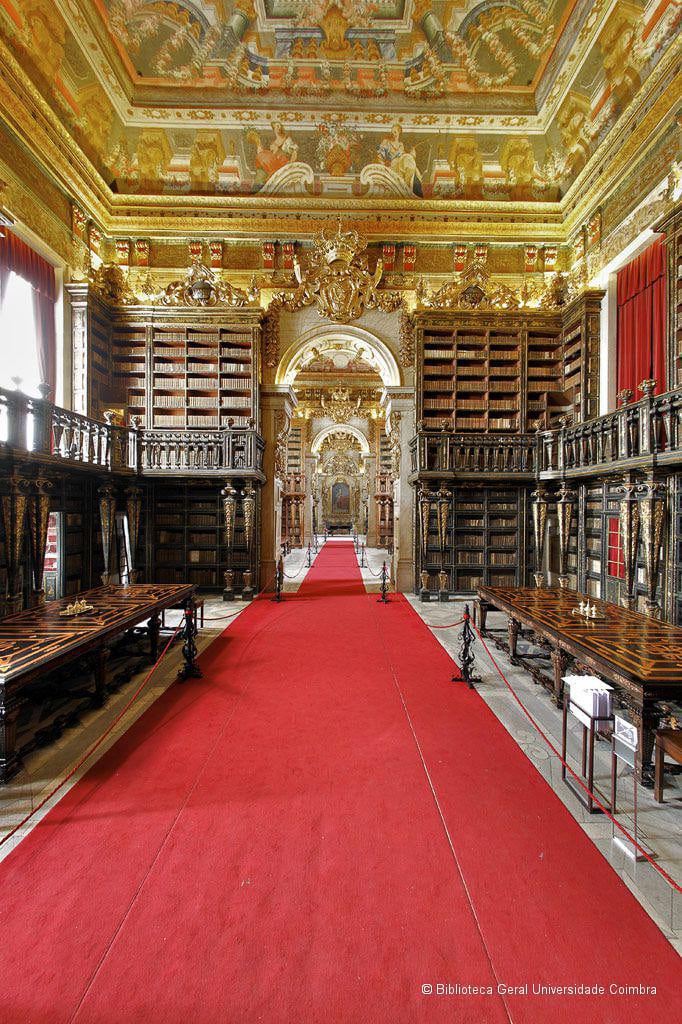 We waited in a small library room before heading up and into the main library – the Biblioteca Joãnina. In 1717, King João V funded construction of the library as part of his efforts to promote artistic, cultural and scientific pursuits. Due to the environmental concerns for the books and structure itself, tour groups are only allowed about 10 minutes to visit this remarkable great hall, and to make matters worse no photography was allowed. 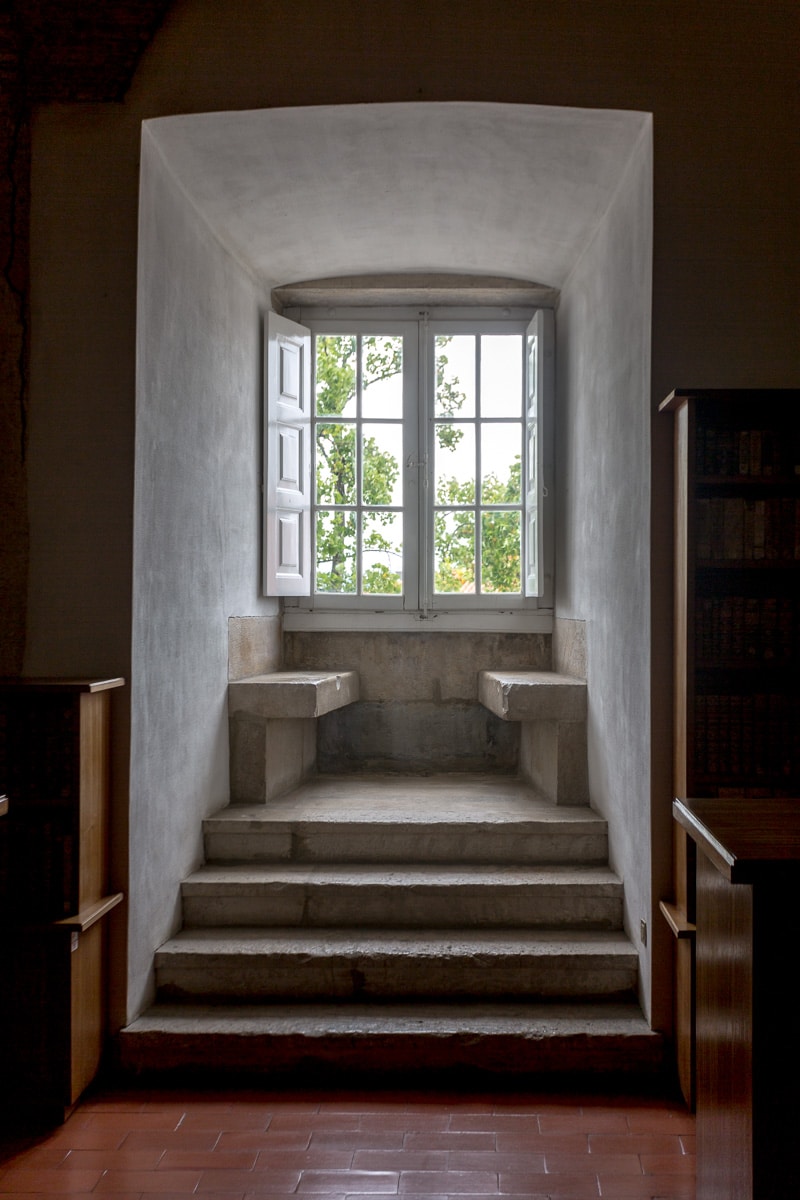 One of the most curious facts about the Biblioteca Joãnina is that, at night, after the library is closed, a bat colony helps maintain the books by searching out and eating insects. The tables are covered with furs to protect them from the bat’s droppings.

As the tour ended, we were walking down the street, when a couple from the tour came by. After a brief chat, we decided to go together for lunch. A nearby cafeteria with a view of the botanical gardens had been recommended. There we found a good simple lunch and good conversations. After lunch, we were off to find the Old Cathedral, and they went off in another direction. 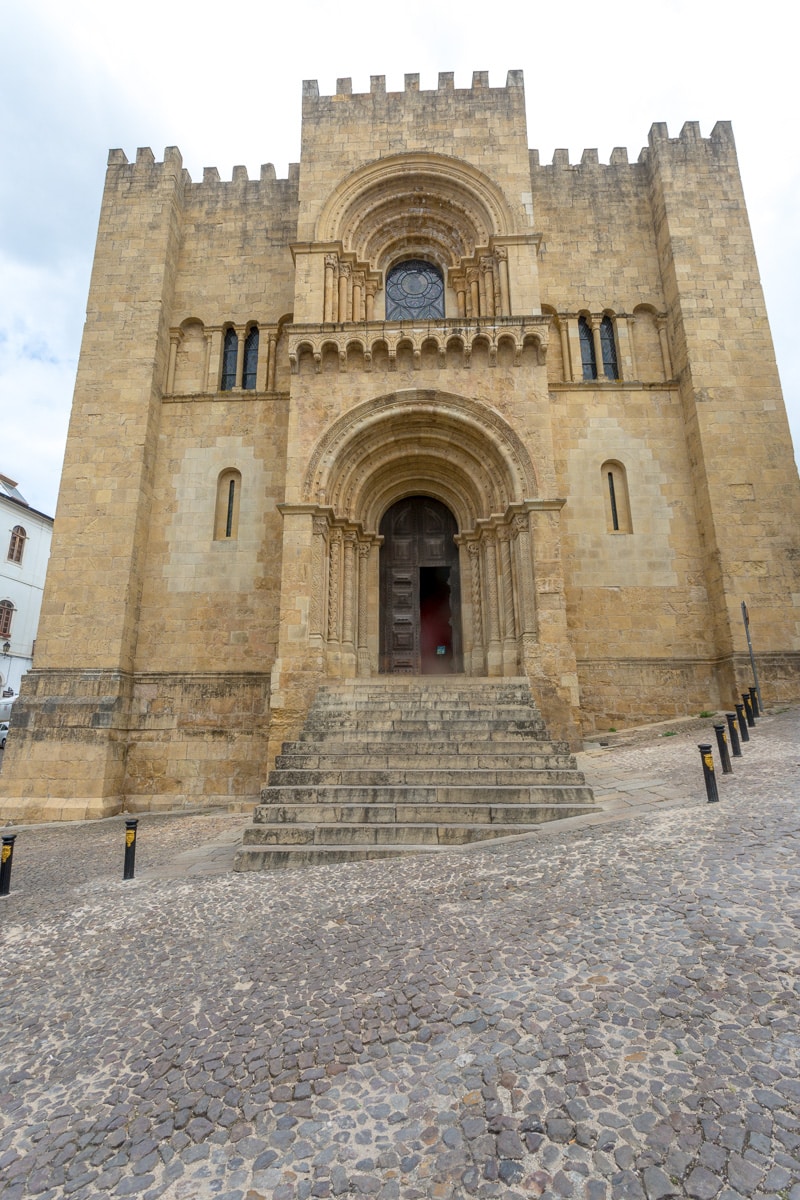 Coimbra’s 12th-century Old Cathedral is one of Portugal’s finest examples of Romanesque architecture. The church was completed in 1184, financed by Portugal’s first king, Afonso Henriques. It was during a time when the nation was still threatened by the Moors, thus its stark, imposing, defensive exterior with crenelated walls and narrow, slit-like windows.

However, the barrel-vaulted interior is a magnificent space dominated by the massive columns and delicate capitals full of leaves and animal figures. Approaching the altar, the impressive Renaissance retable, carved in wood, decorates the center of the main chapel. 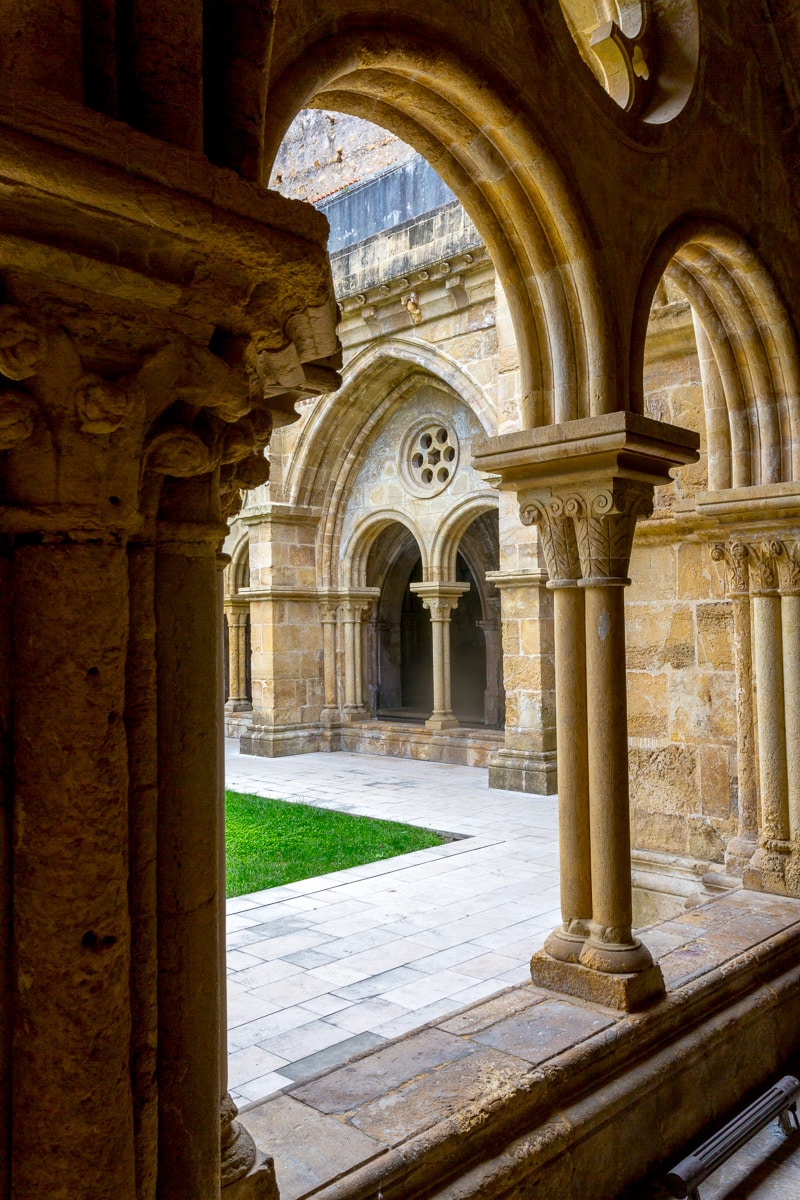 The cloister, added during the reign of King Afonso II (1185-1223) is a peaceful space exemplifying the transition of styles from Romanesque to Gothic; note that each of the pointed arches is distinctly Gothic but contains twin rounded Romanesque style arches. 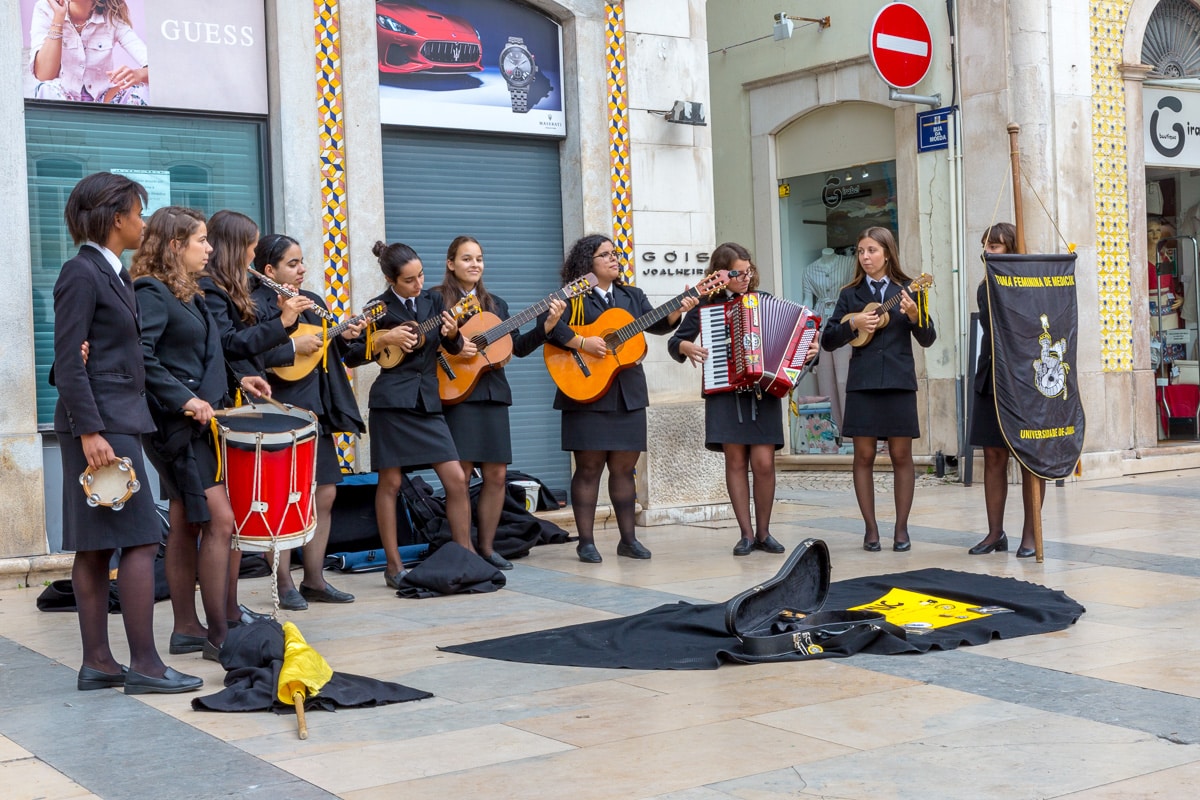 As we left the Cathedral, the clouds looked more threatening. The afternoon was wearing on as we wandered back down toward our hotel. Along the way, we paused  to watch a university women’s musical performance, then walked on to the hotel to collect our luggage.

There was just enough time for beverages before catching the train back to Porto. Later, as we walked home from the Metro we stopped for one last meal at Aquele Tasco, one of our go-to restaurants, and then finally back home.