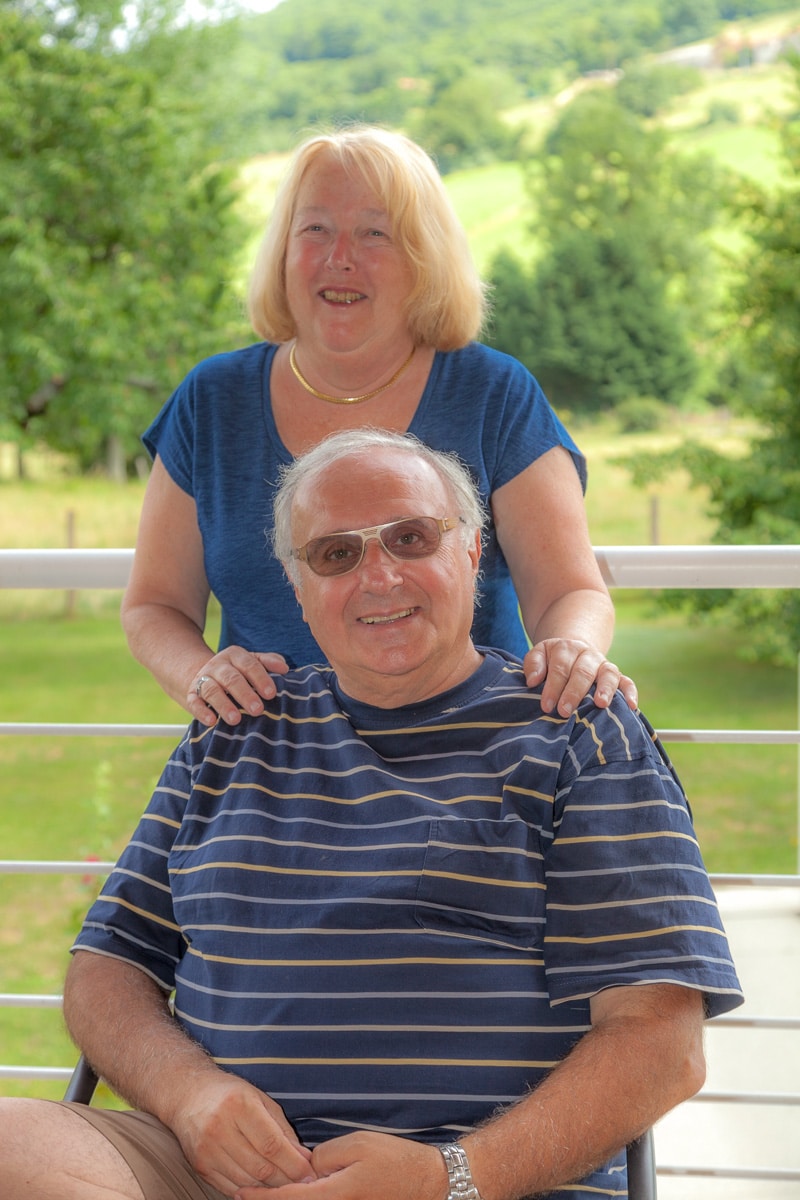 Our busy weekend, begun in the previous post, was not yet over, there were more friends to visit. We had been invited to spend the night at the home of Michel and Francoise (Lucie’s parents) in the Beaujolais area. So Sunday morning, we took a short train ride to L’Arbresle where Michel picked us up. After stopping in a neighboring village for bread we continued to the small village of Ancy. We arrived at their beautiful spot in the country, where they had purchased the land and built their home 12 years ago.

Francoise is an artist and a wonderful cook, and Michel is a great sommelier and “tour leader”. Over two days, we traveled in their car and by foot through beautiful Beaujolais countryside in the golden stone region. One of our stops was in the village of Oingt, which is a classified and restored medieval village listed as one of the most beautiful villages of France. 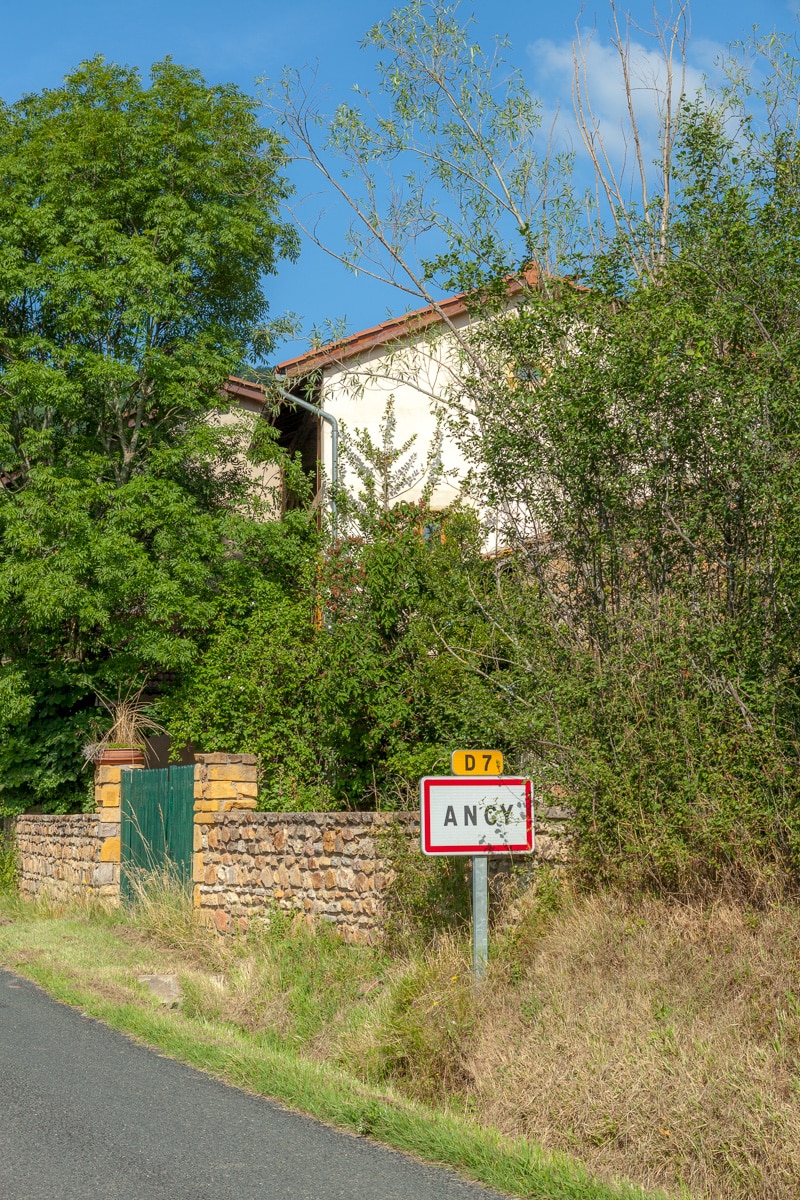 Around the countryside it is cherry season and everywhere people are harvesting cherries, filling boxes with fruit to take to market. We picked cherries from the trees on Michel and Francoise’s property, as well as raspberries. Their garden was the source of the salads we enjoyed over the 2 days, as well as potatoes (cooked in duck fat, yum!) It truly was a honor to experience French life so closely.

Francoise prepared a beautiful lunch of veal cooked in a delicious sauce, served with risotto and girolles (mushrooms). In the French custom, this was followed by the cheese course. Four different cheeses were offered, two types of goat cheese, one very fresh and soft, the other a bit more flavorful, a cow cheese, and the delicious Comte (one of our favorites). A beautiful praline tart was served as dessert (yes, another course, and this is lunch!). And the finale, a nice cup of coffee. 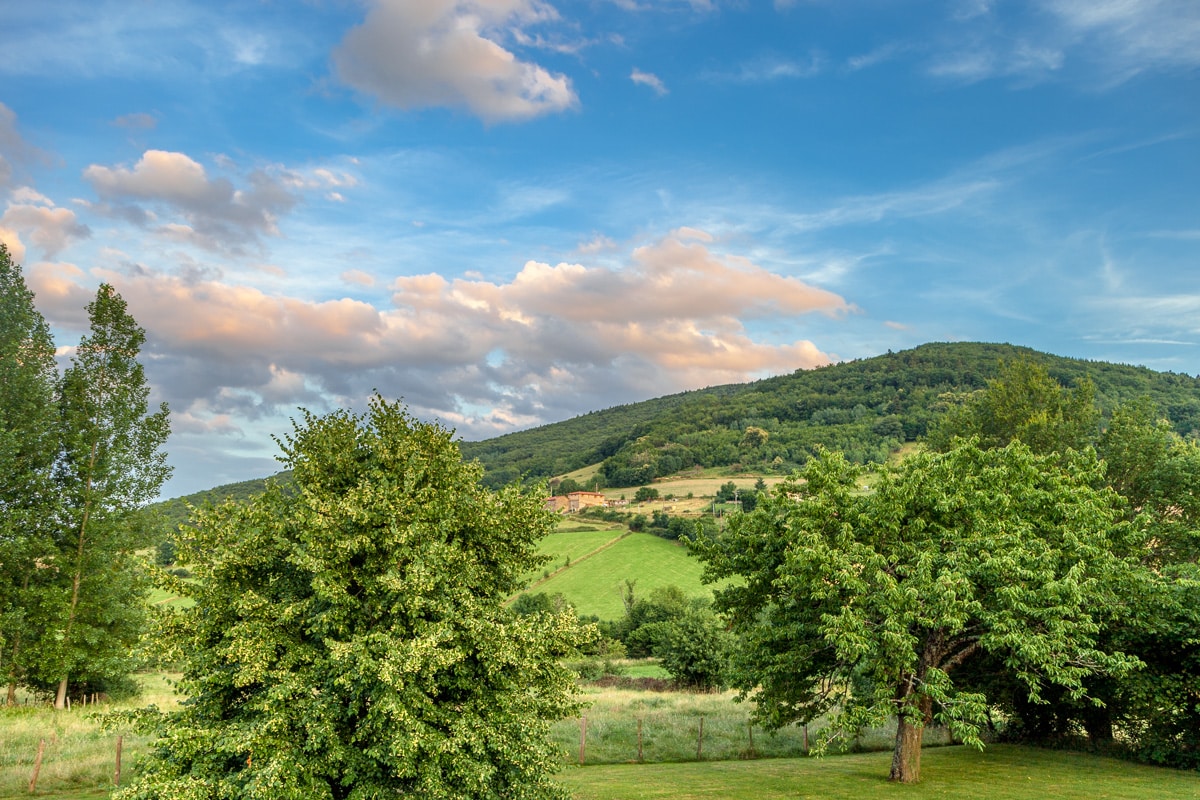 Later we drove to several different sites in the lower Beaujolais area arriving back home around 20h00 (8:00 pm). Francoise went to the kitchen to prepare the apero while Michel and I went to the garden to pick lettuce and potatoes for dinner. We then relaxed on the terrace with a lovely rose champagne (what a wine cellar they have!) and an assortment of saussison, olives, cherry tomatoes and crackers.

Afterwards, we watched Francoise as she began cooking the small potatoes in duck fat, while Michel told us how they and three other families get together to share seven canards (ducks ) each December to add duck fat and meat to their pantries for the coming year. 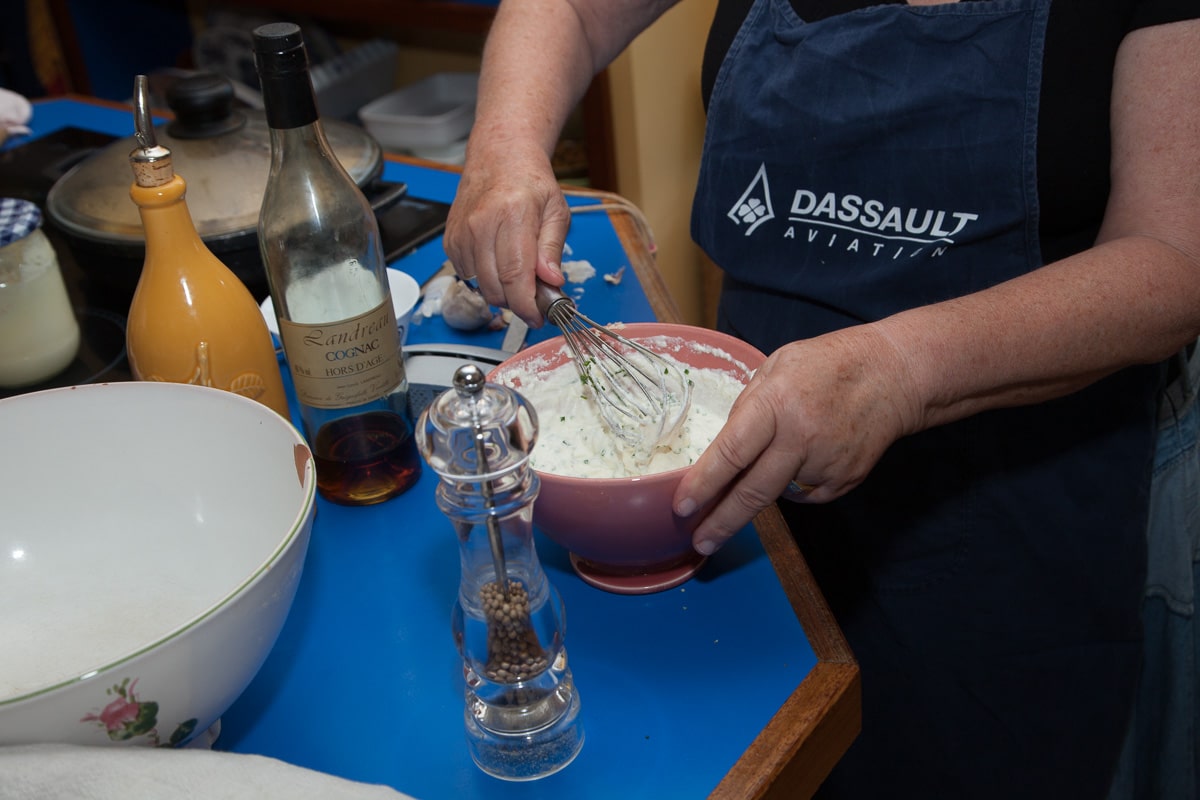 A simple dinner of salad and potatoes was served, with a delicious red wine. Of course cheese was then served followed by another slice of praline tart. It was well after 22h00 (10pm) as we watched the sky darken , and soon after went downstairs to our room and slept soundly until 08h00 (8:00 am) Monday. 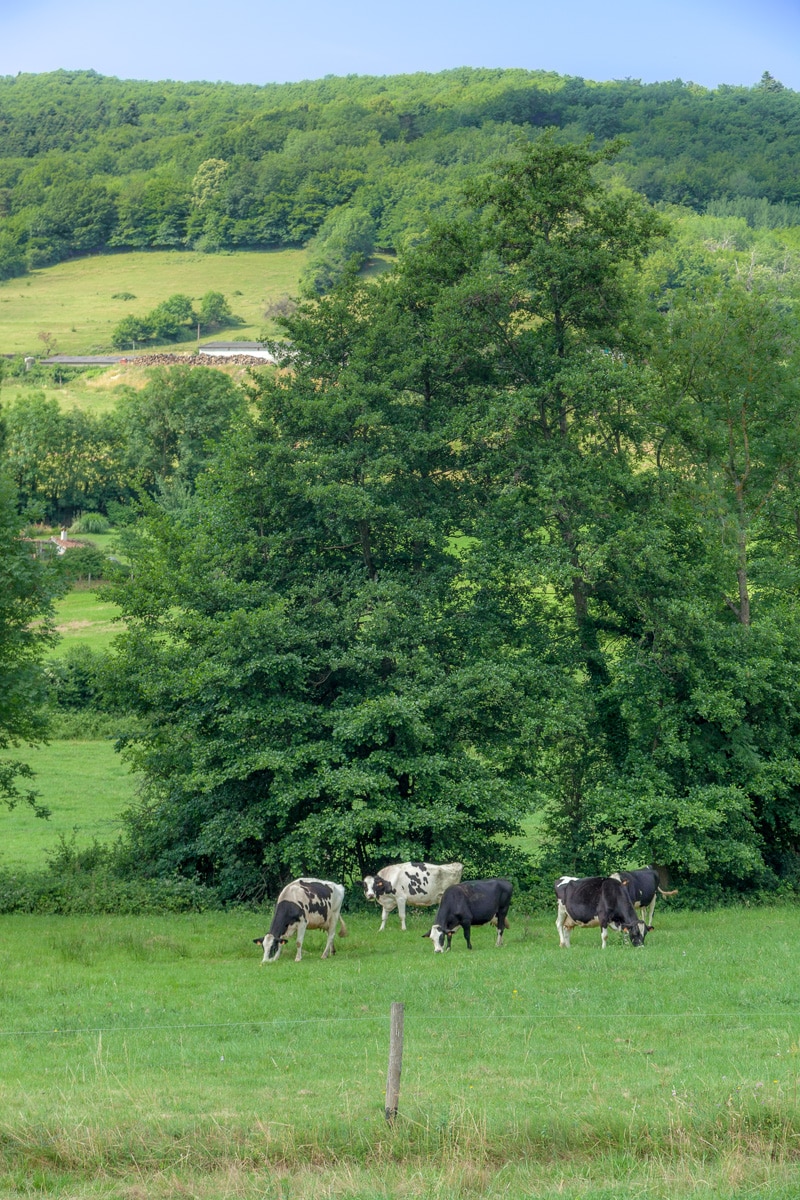 Chris and I then joined Michel as he walked to the local carpenter to see about a project, but as the carpenter was away, and the day was beautiful, we continued our walk down the country road past cherry, peach, pear, quince trees. Prickly vines of raspberries and blackberries lined the way, and flowers of every color dotted the landscapes, while lazy cows grazed with their tails swishing to and fro. We walked about two miles, ending back in their small village of Ancy before we returned home. After a bit of relaxation, it was time for lunch.

Francoise was pleased to see our happy faces when she set the pot of lentils and sausage on the table, and we told her how much we like the French lentilles. This dish was preceded with a nice green salad, and again was followed by cheese. Dessert was a beautiful dish of fruit, with a scoop of ice cream, framboises (raspberries), and groseilles (currants), and topped with a crunchy butter cookie. 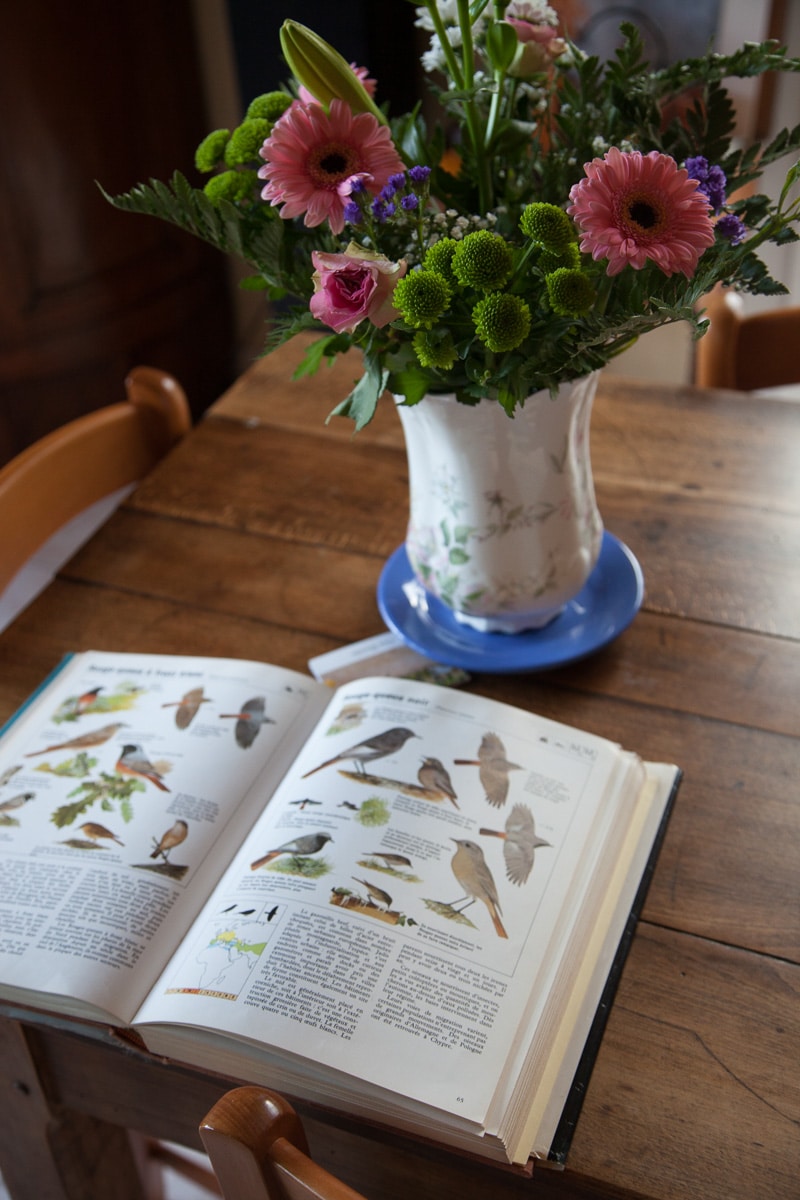 We then relaxed on the terrace and they each shared a few personal mementos with us. Francoise showed us one of her many travel books, in which she had organized the many brochures and tickets collected along the way. We found a brochure about the “Glacier-Waterton” area of southern Montana and Canada, and we told them the story of our bicycle ride many years ago. She also shared her journal where she made notes and sketches of highlights of their trips. They have traveled extensively and we imagine that there are many similar books on the shelves in their home.

Michel shared the history of his father who as a young man during WWII was forced to “volunteer” to work in Germany. His father had never shared this part of his life with his family, and attempts to talk about his experiences were met with silence. But after he passed, among his possessions, the family discovered the diaries that their father had kept. In it were the details of a 19 year old man, though not a prisoner, was forced to work for an enemy. Fortunately, as the war came to a close he was able to return to France to start his family.

However, it was time to start our return to Lyon. But Michel had one more stop for us, at a very modern convent and cloister near the gare or train station. Couvent Sainte-Marie de La Tourette was built between 1953 and 1960 and is the last major work of Charles-Edouard Jeanneret, well-known as “Le Corbusier” in France. It is a very modern piece of architecture, imposing and simple. It is considered so extraordinary that in 1986 it was chosen by French architects as the second most important modern architectural project in France, with the Centre Pompidou in Paris being number one.

Once we arrived at the gare, it was time to say “au revoir” to our dear hosts and friends. We had a wonderful time sharing their home and their countryside; we had eaten delicious home-made meals and drank some delightful wines. But most importantly we enjoyed their company and the honor of staying in their home. We departed hoping that we will be able to meet again … somewhere.

Our trip home was not on the “train” as we had taken from Lyon to L’Abresle, but we were on a tram-like rail service from L’Abresle to Lyon Gorge du Loup where we transferred to the metro for the final legs of our journey home.

It was good to be home. But we first had a light dinner on the terrace and reflected on our incredible weekend of friendship as we live our life away from our former routines and our family and friends in Florida.

Now, time to do the laundry…