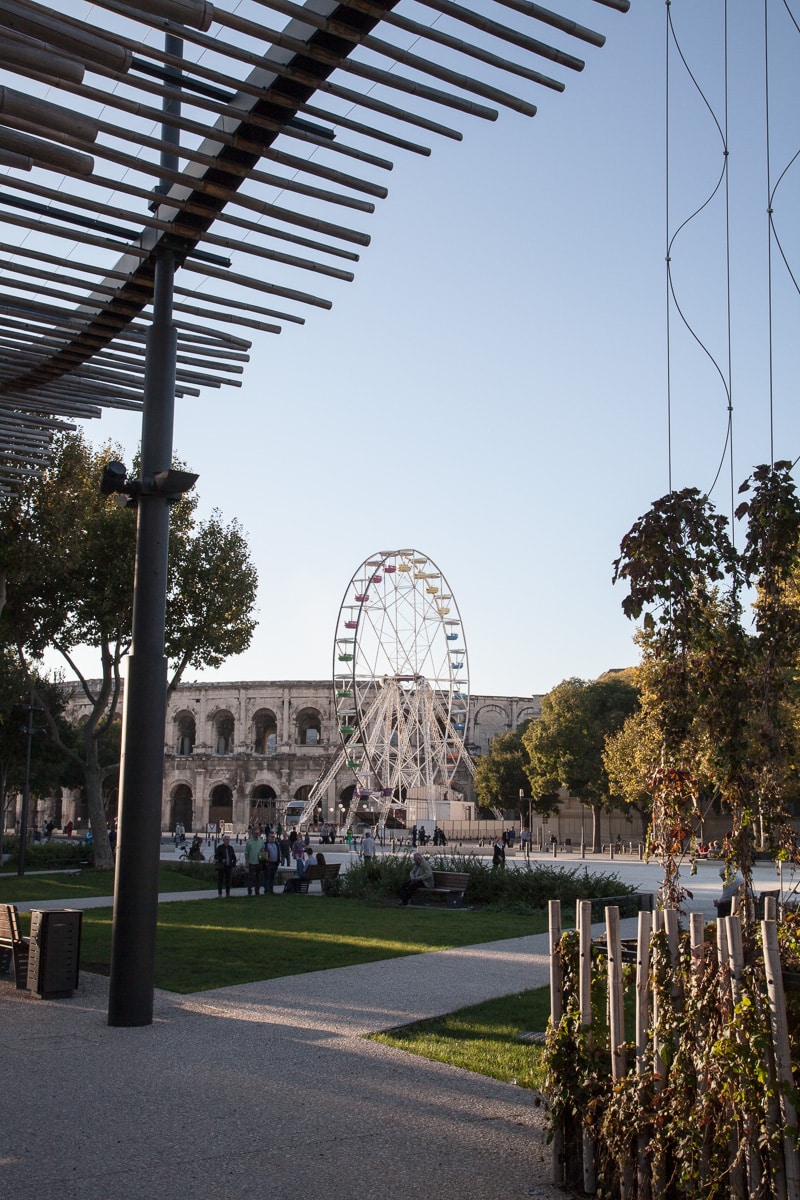 When one is able to just get in to a car and go somewhere, travel without a car can seem difficult. For some destinations it is impossible. But there are so many places to visit that only require a train ticket.

Non-automobile travel has several obvious advantages, you don’t have to drive, or navigate, or park, and you can actually enjoy the scenery. Off-peak tickets can be very inexpensive, and even better with a senior discount.

Today we decided to go to Nîmes, about 60km (45miles) northwest. Upon arrival in Nîmes, which took just over an hour from Montpellier, we exited the Gare (station) and began the day with a stroll down the beautiful, tree-lined walking avenue that took us to the large plaza Esplanade Charles-de-Gaulle. Locating the tourist information office, we got a map with a walking route that would allow us to take in not only the city’s more important monuments, but also enjoy the town itself. 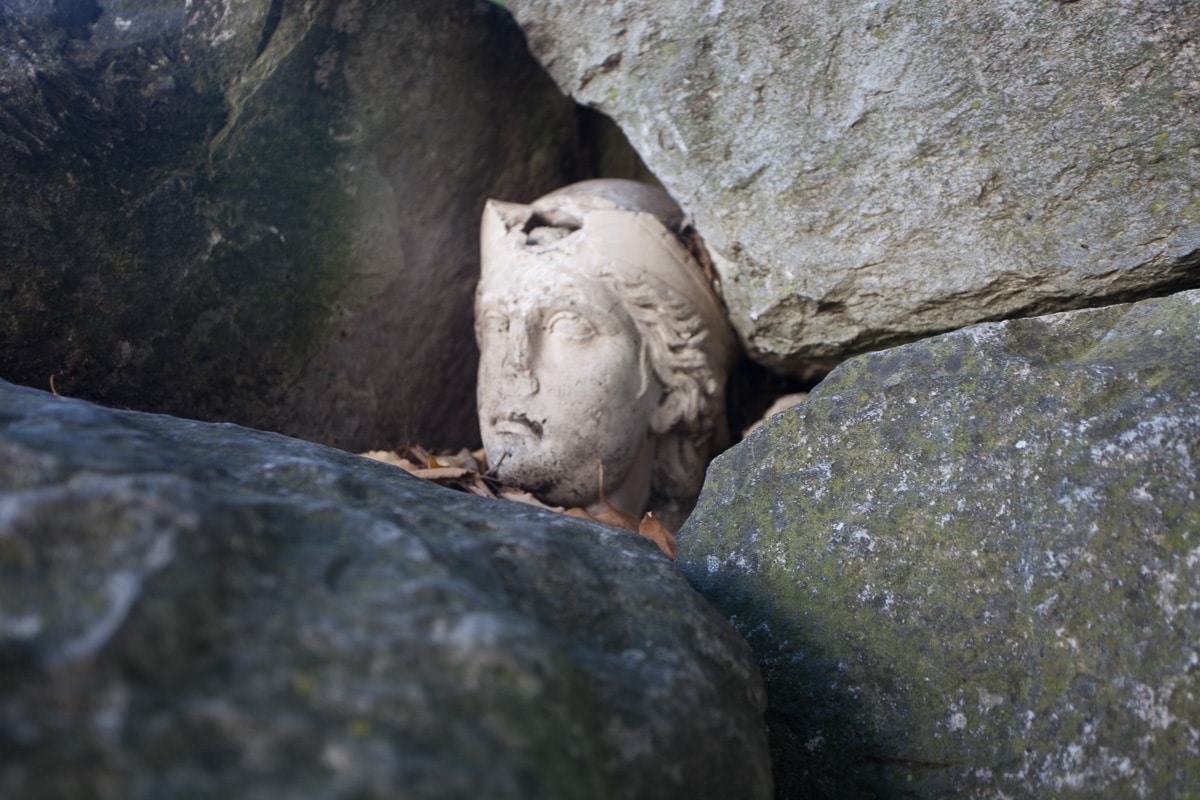 Nîmes is another ancient city in southern France. Evidence of habitation in the area extends as far back as 4000 BC when semi-nomadic cultivators occupied the alluvial plain of the Vistre River.

A Roman colony since before 28 BC, Nîmes had an estimated population of 60,000 when Augustus made the city the capital of Narbonne province. It was during the glory of the Roman period the Nîmes Arena and the Maison Carrée were built.

The Arena of Nîmes is a Roman amphitheatre built around 70 AD, it measures 435 ft (133 m) long and 331 ft (101 m) wide. In Roman times, the monument could hold 24,000 spectators spread over 34 rows of terraces. It was remodeled in 1863 to serve as a bullring, and remains an incredible testament to Roman engineering. Though not the largest of Roman amphitheatres, this one is considered the best preserved.

As we walked through the stone galleries, surrounded by the echoes of history, one could imagine the thousands of citizens swarming through the arches and into the arena to witness the gladiatorial battles or other spectacles. Ascending the worn stone stairs, I noticed that the height of each step was greater than by modern standards. It would have been quite a climb for the short or frail. 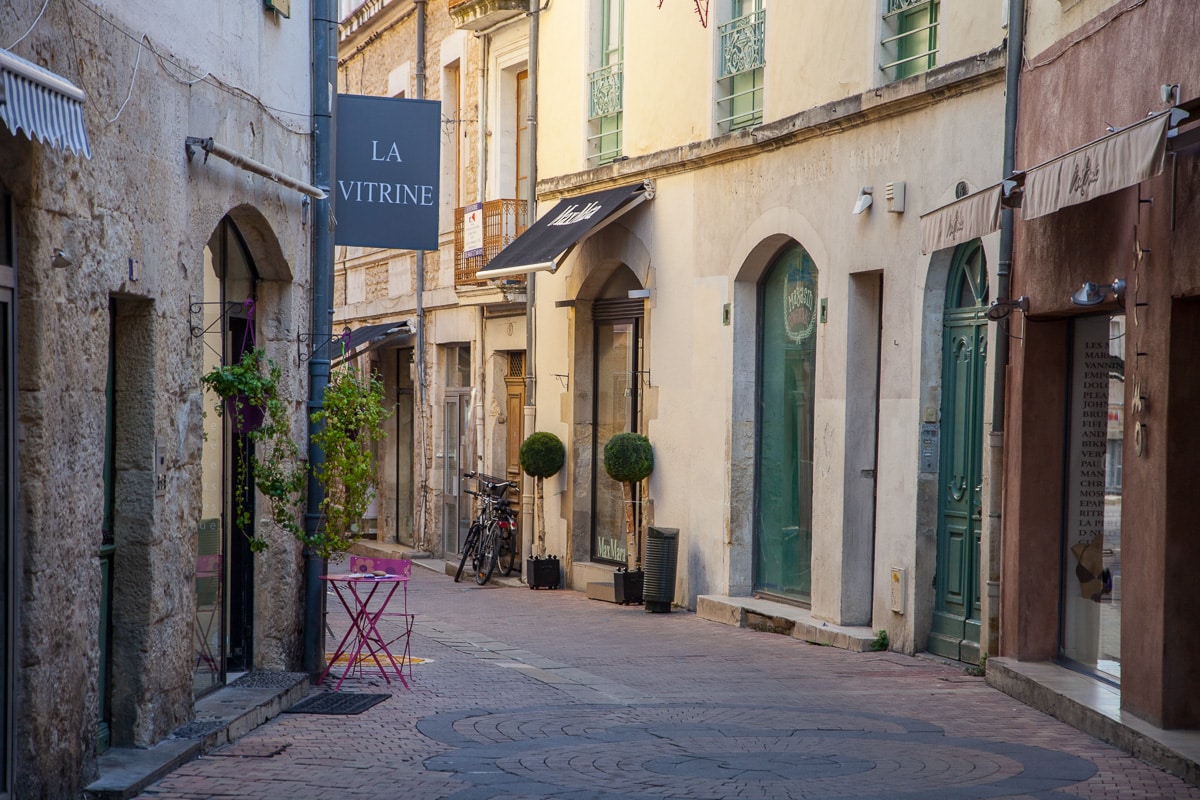 The view upon entering the amphitheater was impressive. Appearing larger than the published dimensions, its overall shape was a perfect oval with steep sides lined with modern wooden seating built over the original stone. The arena itself was also oval, concentric with the entire structure. The floor, covered with sand, now is the scene of bullfights rather than gladiatorial glory.

Leaving the arena we walked down another tree-lined avenue toward the Maison Carrée. Built by Agrippa, in about 20 B.C, this building is considered one of the most beautiful and well-preserved temples of the Roman world. Twice as long 26.5 m (87 feet) as it is wide 13.5 m (42 feet), it was a major influence during the Classical Revival period, inspiring Thomas Jefferson’s Virginia State Capitol (1788), La Madeleine in Paris (1806), and many other monumental buildings.

Descending the very steep stair of the ancient temple, we came to the Quais de la Fontaine, a portion of the extensive 50 km aqueduct system built by the ancient Romans. The system was used to transport water from the mountains to the city of Nîmes. These beautiful tree-lined canals reflected the fall colors in the gently flowing waters. Walking along we came to the Jardins de la Fontaine built made ​​in 1745. Designed to highlight two Roman monuments, the Temple of Diana and the Tour Magne. 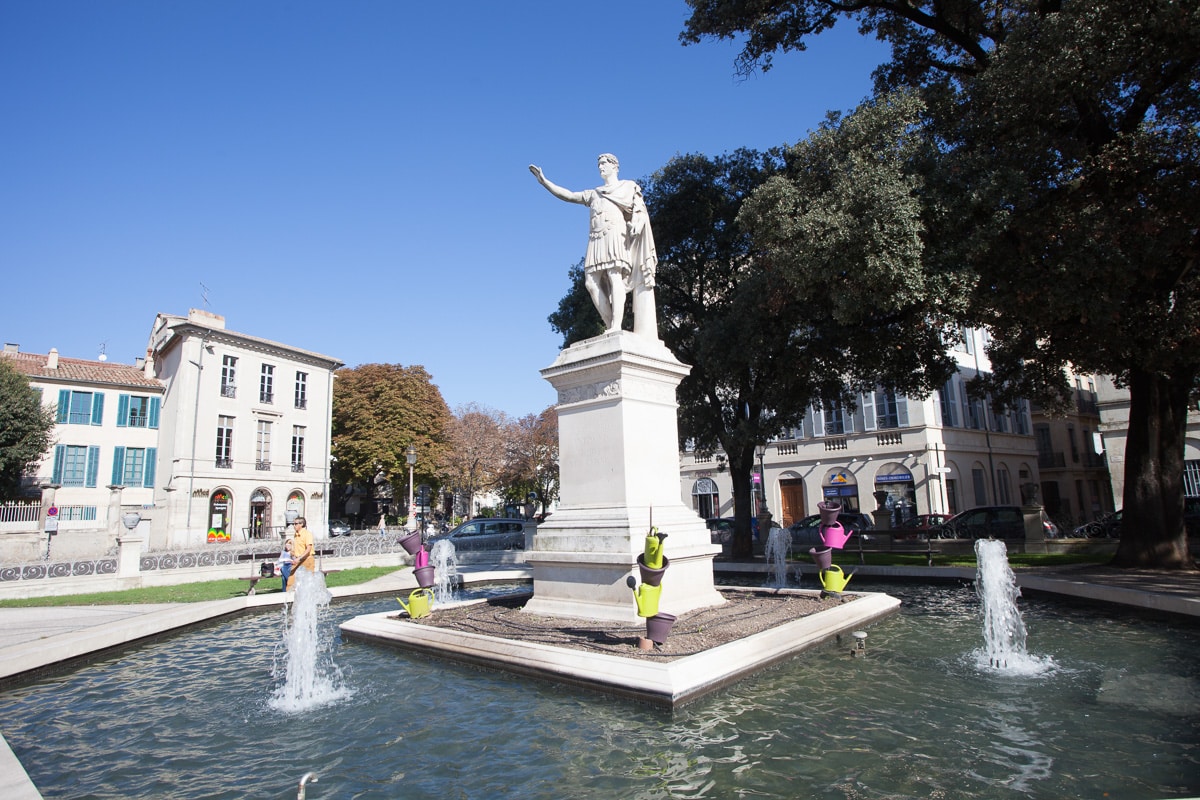 The gardens, one of the first public parks in Europe, are built on Mount Cavalier. At the base of the gardens, the Temple of Diana was constructed during the reign of Augustus (63 BC -14 AD), but its exact purpose is unknown. Winding paths take you upward through a lovely forest of trees and shrubs that end at the top where the Tour Magne stands.

Standing at the highest point of the city, Mont Cavalier, the Tour Magne, or the Great Tower, is the only remnant of the ancient Augustan fortifications that were built during the third and 2nd centuries BC. Its strategic position now allows for a great panoramic view of the city.

We descended Mont Cavalier and spent the next few hours exploring Nîmes, a vibrant and active city. We would have liked to have had more time here, but the sun was heading toward the horizon, and we needed to return home. So, we stopped for some coffee on the Esplanade Charles-de-Gaulle before retracing our steps along the tree-lined avenue we walked when we entered Nîmes. The remaining sunlight painted long shadows across our path as we said goodbye to this delightful town.