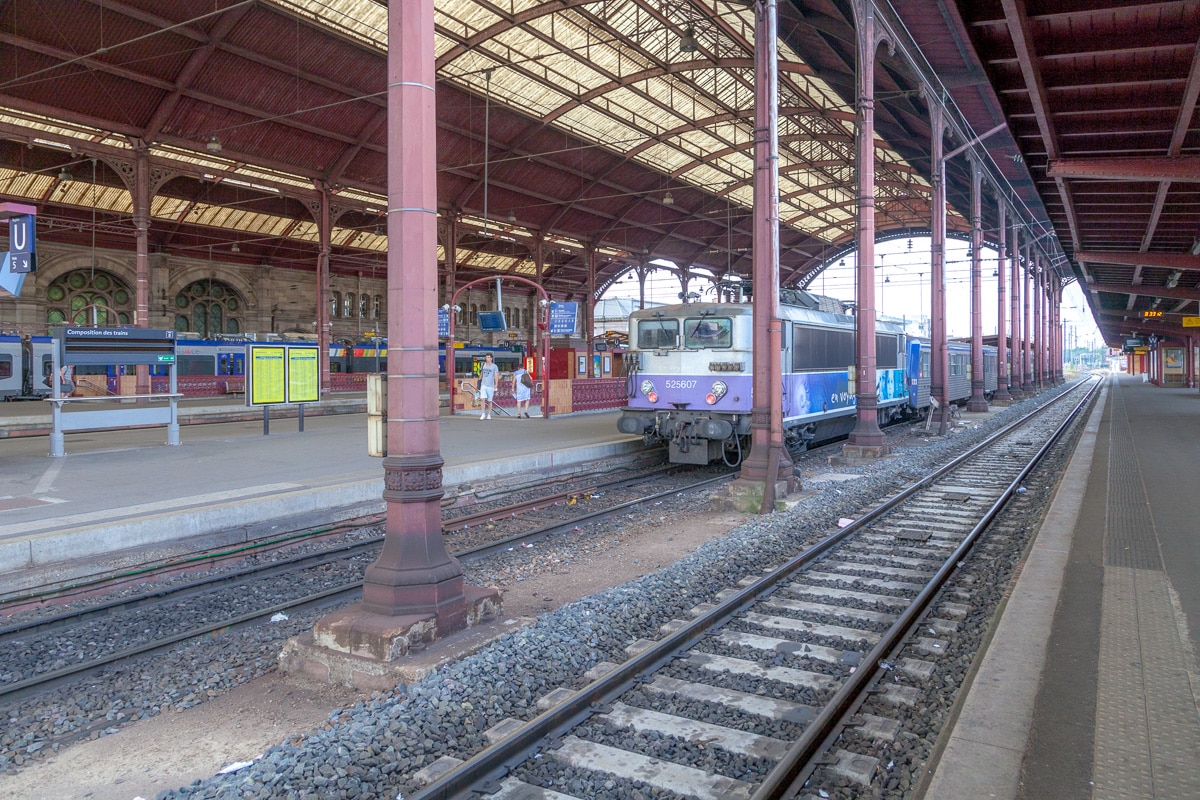 The heat wave here in Europe continues. The temperatures have soared back into the 35-38° C (upper 90s F), and we needed to get out. Where to go? We are near the Vosges Mountains so maybe we can find a walk in the woods. Since we don’t have a car, we are limited to places within train or bus transport. So after a bit of searching on the internet, we found walking options from Munster (cheese, not Herman), France. The train from Strasbourg first took us to Colmar where we changed to a little local train and after seven stops and about a total of one hour travel time, we arrived in Munster. 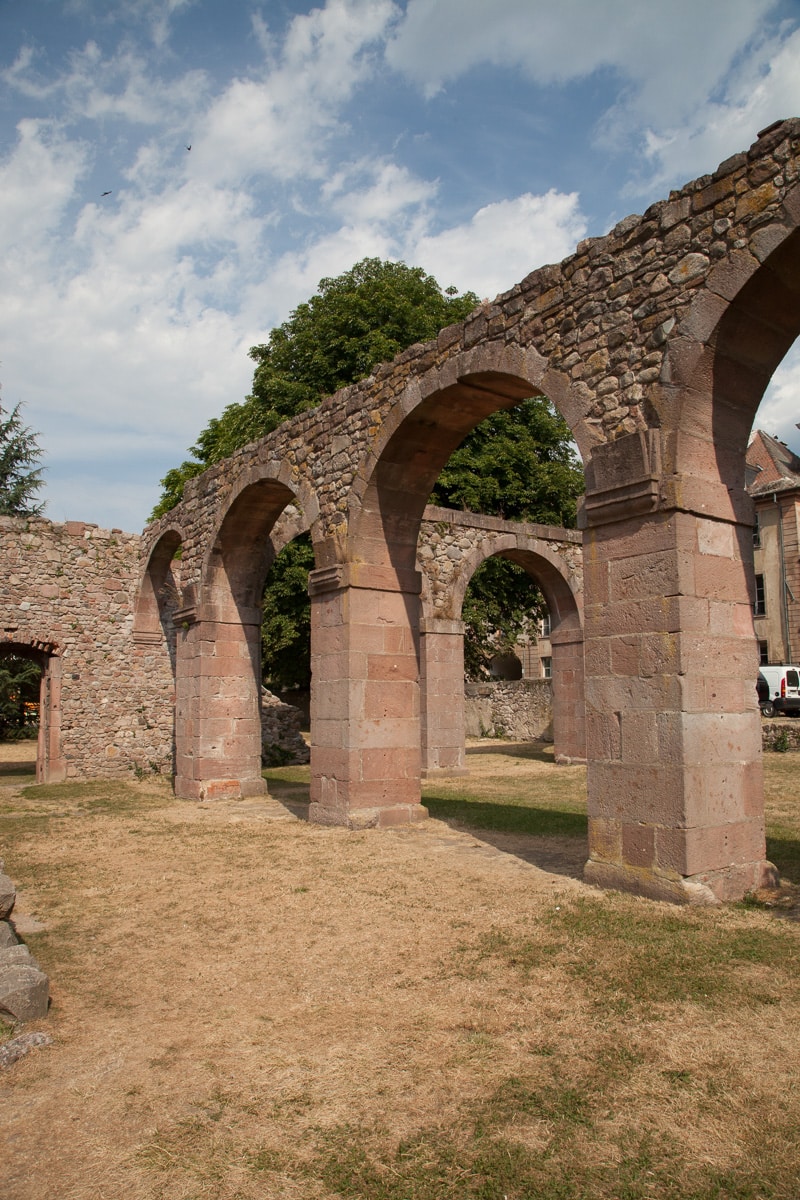 Munster was the site of a 7th-century abbey or monastery founded by monks from the Munster region of Ireland which gave the place its name, and is famous for Munster cheese that the monks developed. Unfortunately, over the years, Munster suffered yet survived many wars including the Thirty Years War that raged 1618 to 1648, the First World War when 85% of the town was destroyed, and then World War II. 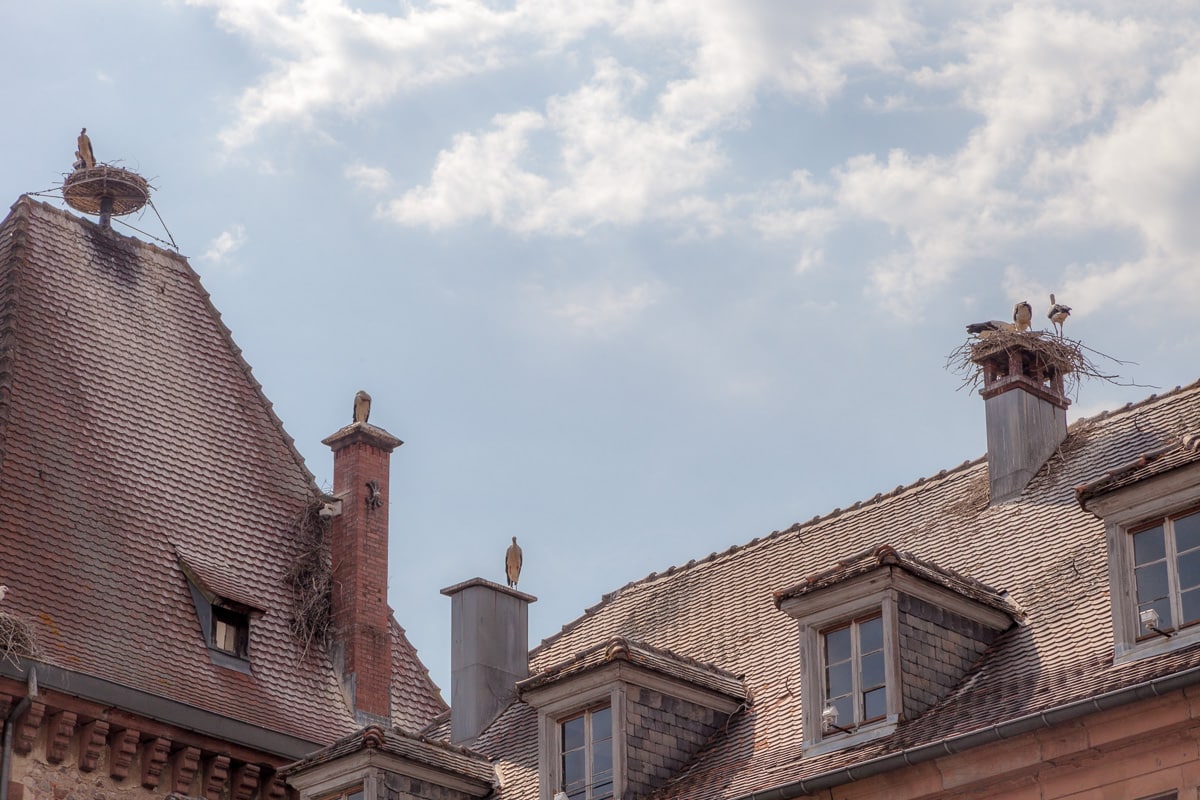 One of the first things we noticed in Munster was the large number of storks nesting on the rooftops. Though they are rather common in this part of Europe, there was abundance here. Storks have little fear of humans if not disturbed, and often nest on buildings. Legend says that not only do stork deliver babies, the presence of a nest on a house was believed to protect against fires. It was also believed that their souls are human, while some households would encourage storks to nest, to bring good luck. Still other cultures believe that storks bring harmony to a family on whose property they nest.

Though not quite as charming as some of the other wine towns we have been to, we stopped at the Tourist Information office to find maps for walks out into the countryside. They only had map packages produced by the local Vosgien Randonee group, so we purchased a set that included walks directly from Munster. We needed to make one more stop in town to get lunch (sandwiches, cookies and water) for another picnic. 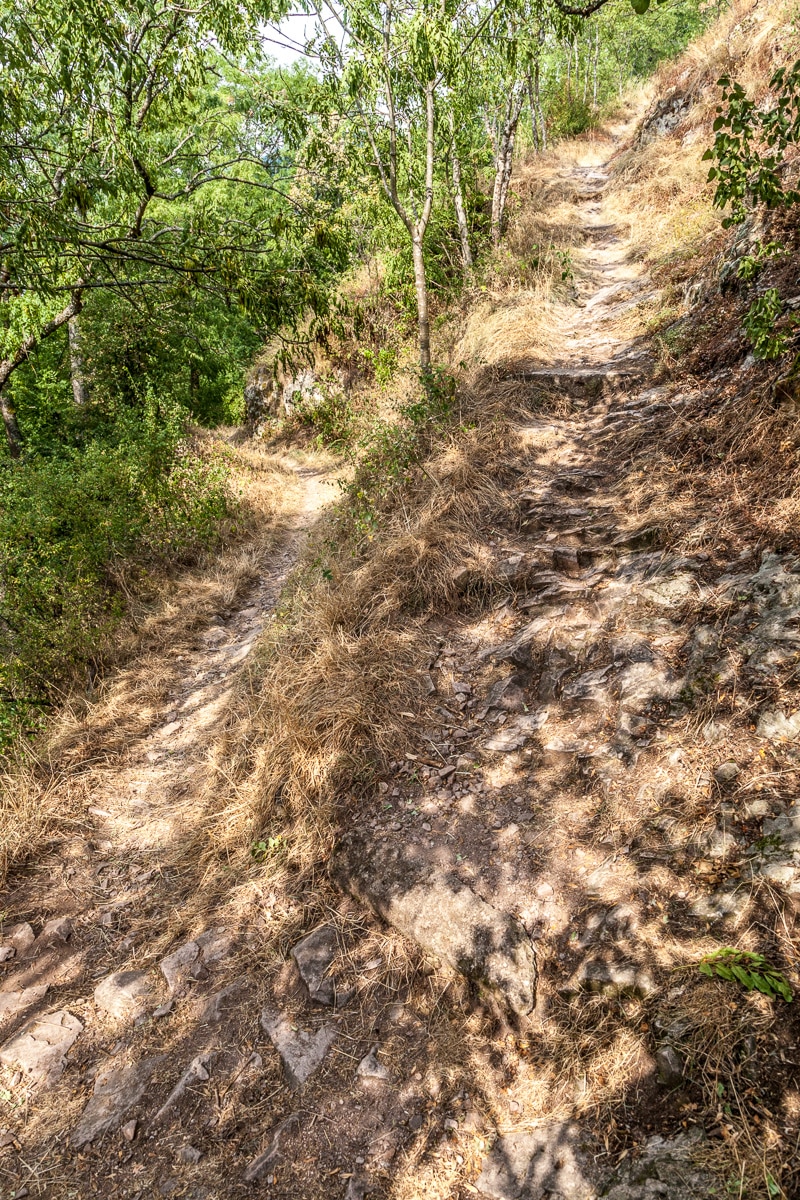 The start of the route was clearly marked and began with a steep uphill climb on a gravely path. I had brought both of my walking poles anticipating the inclines and rocks, and needed the extra stability. My two falls last year were quite enough, so I try to be more cautious (too much so for Chris at times). We climbed and climbed, and though we were in shade part of the time, it was hot! Tres chaud, and it was still morning. We hoped our four bottles of water would be enough.

There were benches for resting and enjoying the view along the way, but our walk was just beginning so we huffed on. Along the way we passed a couple of old concrete bunkers, remnants of past wars.

Eventually the path leveled out (yay!) and we were in the shade of the woods with the bonus of a slight breeze. Our path took us through deep forests, across fields with wonderful views of distant mountains, and we walked narrow chemins or farm roads, with the occasional passing farm equipment, to the village of Hohrod. We found a convenient picnic table in the shade, and though it was not yet noon, we were hungry, hot, and ready for a rest. 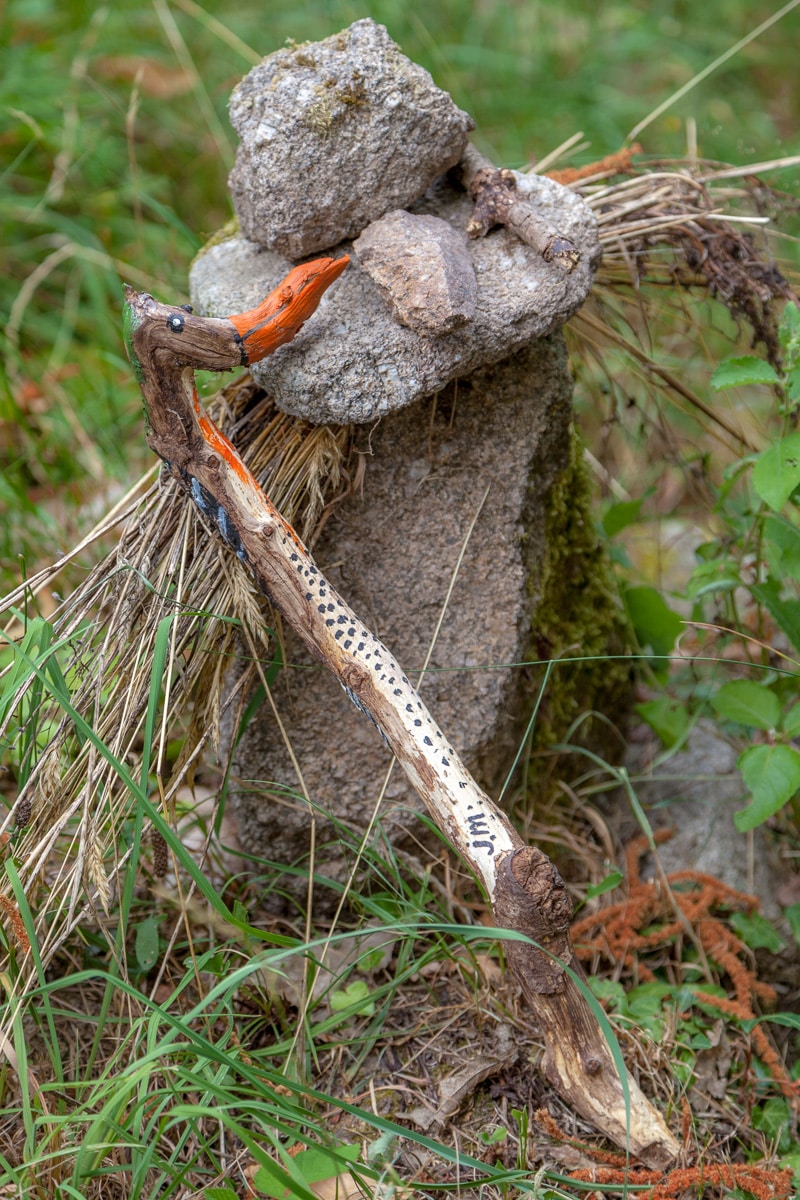 The rest of the walk was slightly downhill, and a stretch of the path was also marked with cairns and other little objects. Some were new and others quite old and moss covered, still others integrated the remains of old garden equipment (a shovel blade) and it was fun to imagine walkers balancing the stones as a fun diversion along their way.

Once we arrived back in Munster we stopped at a brasserie for a cold drink. After re-checking the time and the train schedule, the next train wasn’t for two hours, so we had plenty of time to rest and then wander the town.

As we enjoyed our drinks under the shade of the brasserie’s awning, a number of cyclists parked their bicycles out near the street and soon all tables were filled, including the other chairs at our table. It was soon clear that they did not speak French (as if we do), and when Chris attempted a conversation we determined that they were from the Czech Republic on a cycling tour. We attempted to tell them that we had visited the Czech Republic and they shared that they had been to Canada and once to Florida. Struggling to remember even one word in Czech (a very difficult language), we remembered “ice cream” or in Czech “zmrzlina“. Even with Chris‘ very poor pronunciation, they understood and we all had a good laugh. 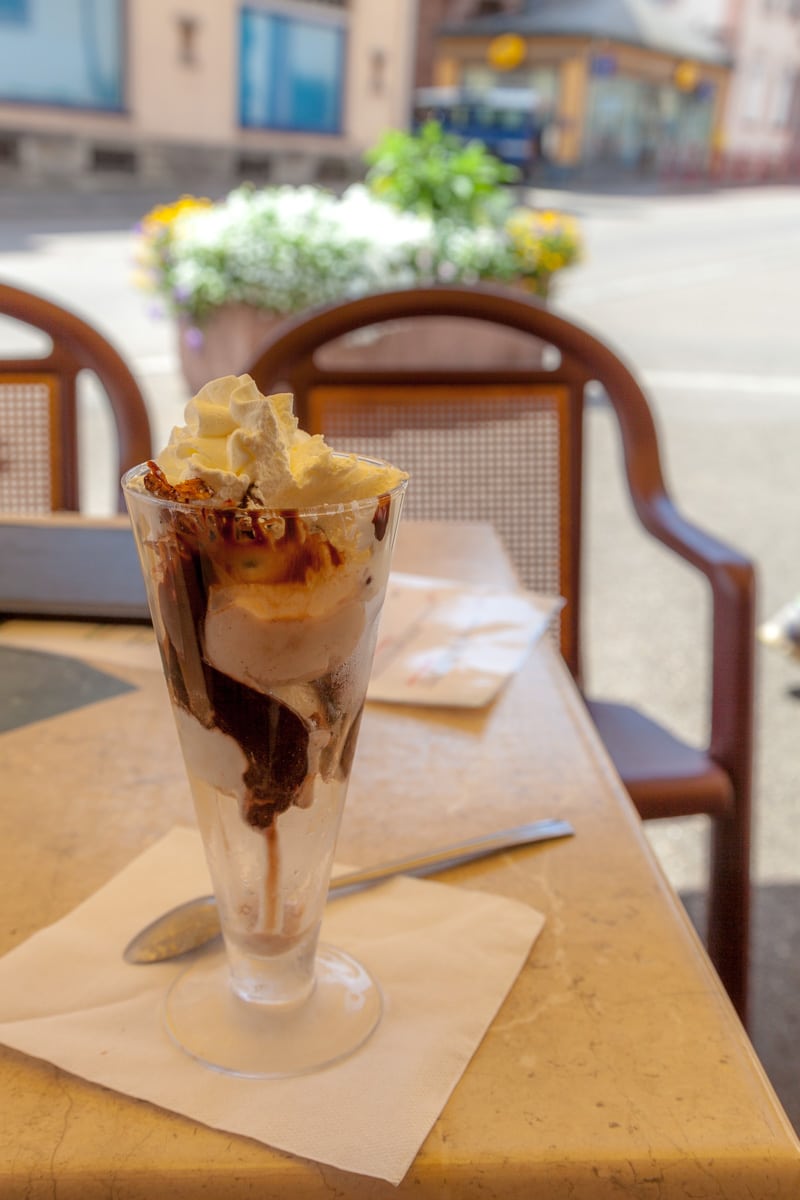 We said goodbye to the Czech cyclists and decided to venture to the park to fill our time. Spreading a cloth on the ground, we enjoyed a brief nap in the shade of some giant trees there, and then walked to the train station (stopping along the way for some “zmrzlina“), only to discover that the schedule we were using for the train was not in effect in July. So we walked to another park, and waited on a bench watching children in a playground, then we finally caught a departing train at 4:41.

After arriving in Strasbourg, we noticed that the temperature there had reached 38°C or 100°F (only a little higher than Munster). Needless to say we had a lazy dinner in front of our fan, and turned in early to sleep the sleep of hikers.

It was a great day and another beautiful walk!