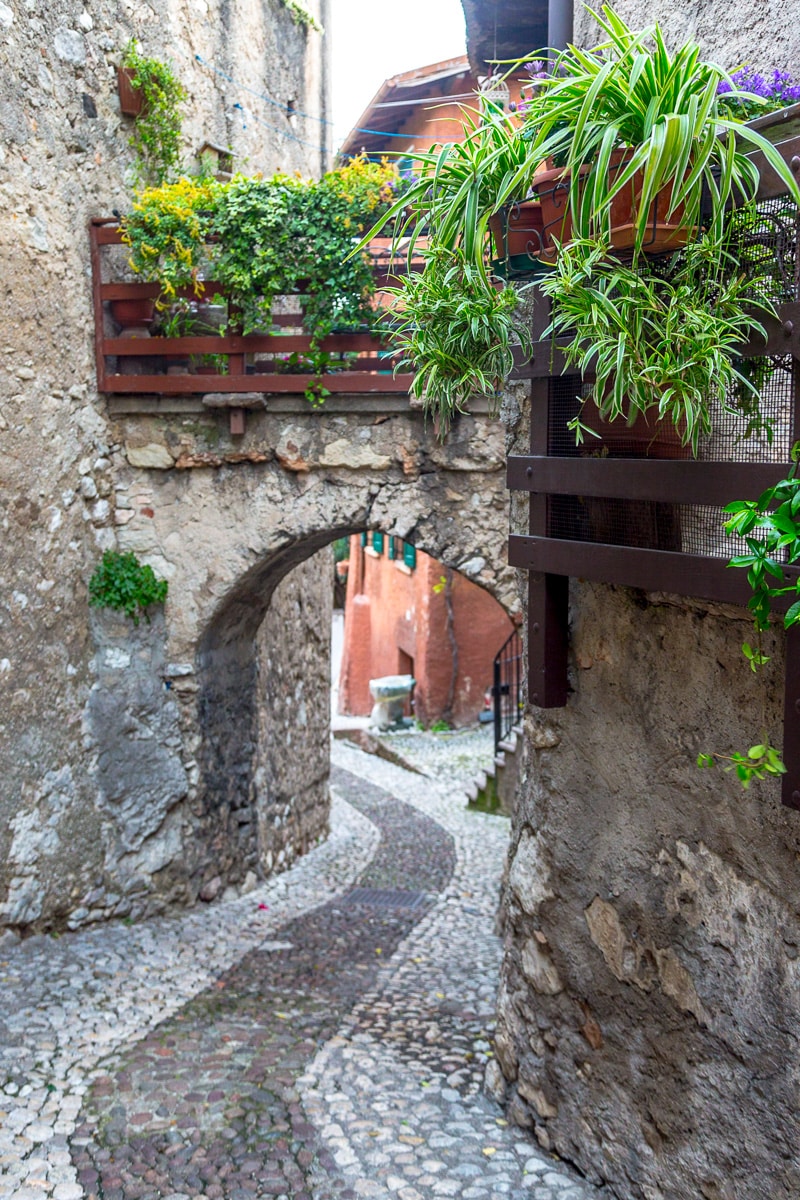 As is usual for us, we awoke just before the 0700h alarm. The plan was to take an early cable car up to Monte Baldo to avoid the crowds, but the day had other plans. It was cold, very windy, and overcast so, after breakfast, we just went out wandering.

Malcesine is just as charming in the early morning as in the late evening – even when overcast. Shops are still closed, cafe staff are only beginning to move their tables and chairs out, and the church bells start their schedule. Bundled against the cold wind, we found the lake side promenade heading north.

The stroll to Navene, about 5 K (~3 mi), was delightful. The sky sprinkled us lightly a few times before we stopped in the tiny, former fishing village for cappuccino and brioche. From there we returned by bus, as the weather seemed to be improving, giving us hope. Unfortunately, the bus was running about 20 minutes late. Still, waiting for a bus alongside beautiful Lake Garda, Italy wasn’t too shabby. 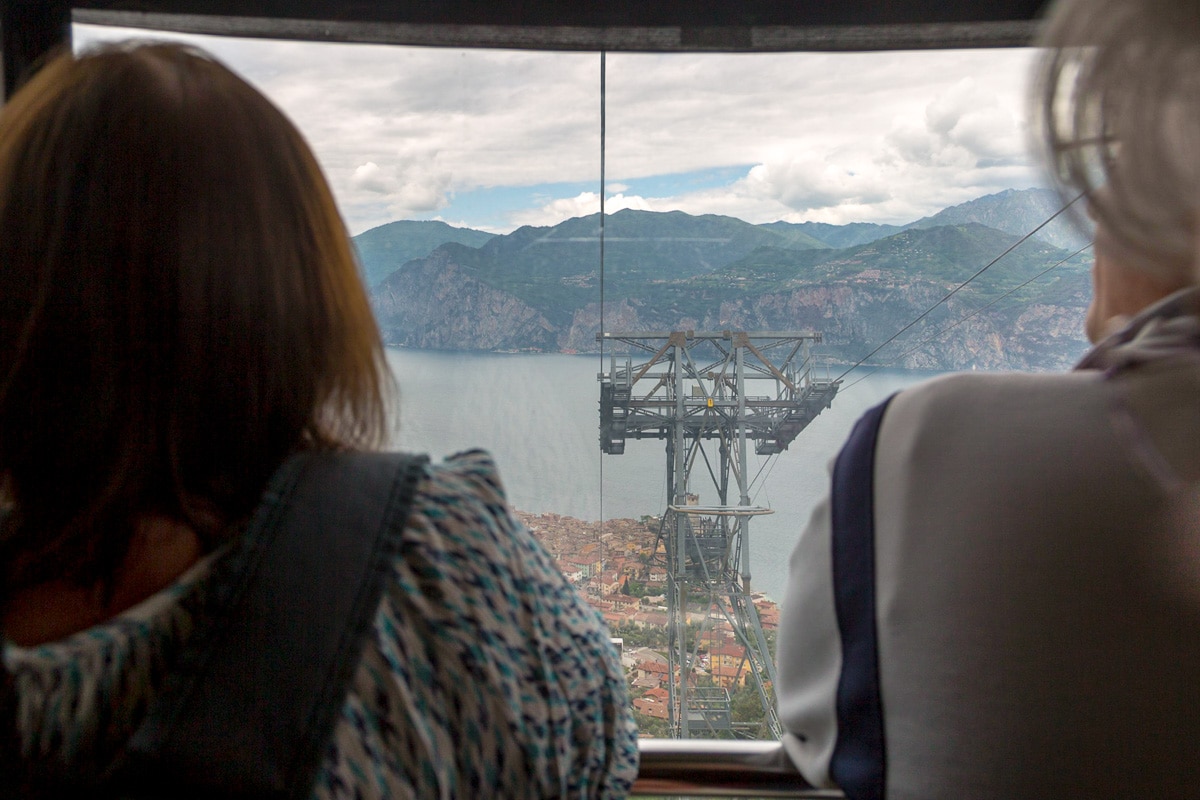 Arriving back in Malcesine, we decided to walk up and see what the cable car queue looked like. It was relatively short, we were prepared, and so we took off. Each cable car is packed to the max before going up in two stages. On the first car, we climbed and climbed to the first station where we got off, and switched to next. Packed in again, this car slowly rotated so you could get a 360 degree view. Fabulous. 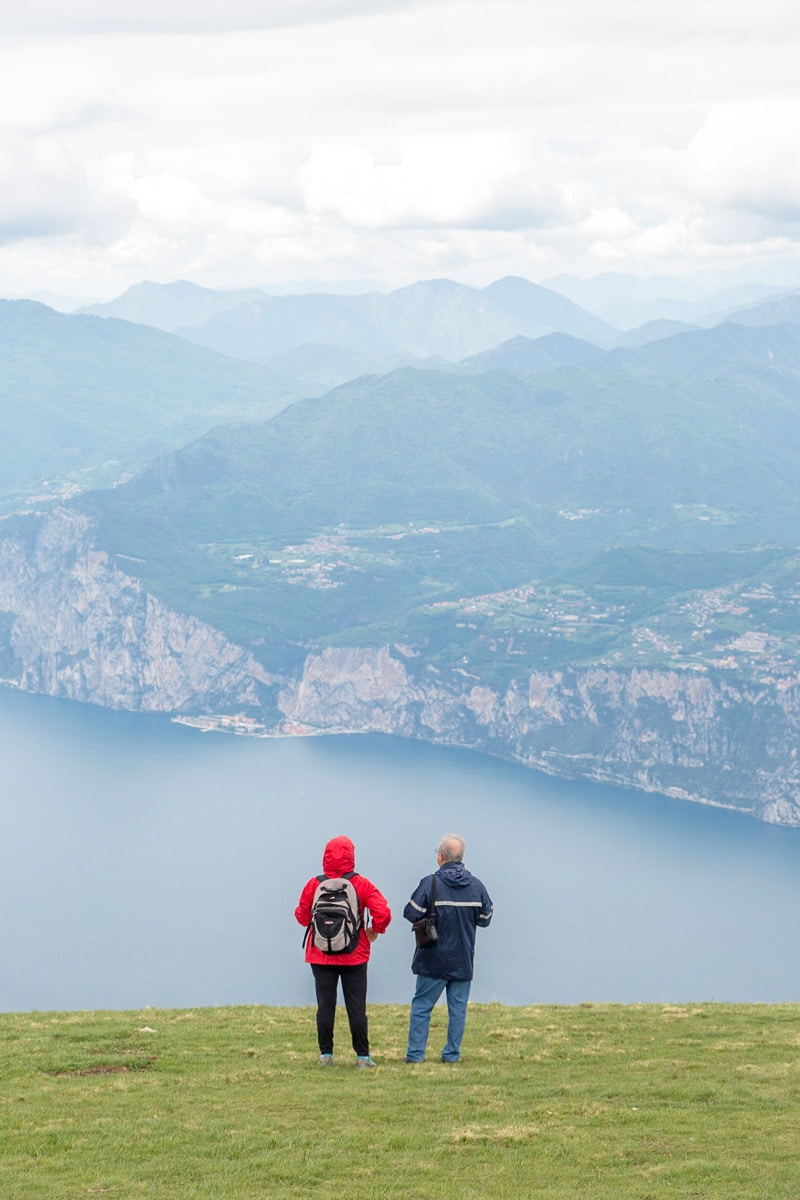 The elevation where we were was about 2,200 m (7200 ft) affording us, breathtaking views up and down the 50 km (31 mi)  length of Lake Garda. Walking all around we admired the incredible panorama even as we cautiously eyed the dark clouds that seemed to creep across the mountains and dissipate. Several parasailers were fluffing their sails, waiting for the right moment to leap into the sky for a 5 km (3.1 mi) flight across the narrow part of the lake.

Wandering into the mountain-top restaurant for lunch, Jeannie had goulash soup, while Chris had pasta with mushrooms. Then it was back out for more wandering. 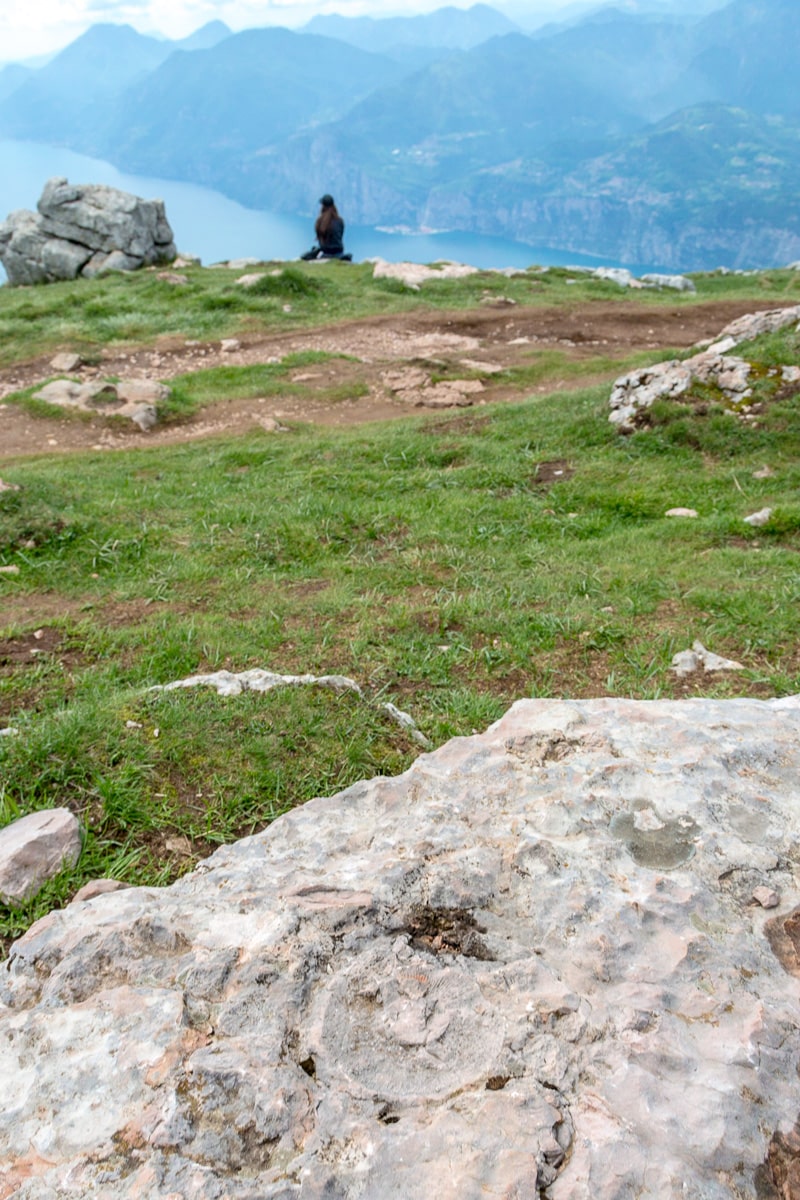 The weather continued to improve, and it was nice to have no strong time restraints. Chris took some time to study some of the rock formations that, at this elevation contained many ammonoids, the fossilized remains of Jurassic sea creatures. It was in places like this that Charles Darwin formulated his theories, realizing that marine deposits atop massive mountains could have only arrived there over many millions of years as opposed to hundreds, which was groundbreaking at the time.

With the afternoon wearing on, we returned to lake level by the cable car. By now, there was quite a line of people waiting to go up. Our decision to go up under the marginal weather conditions had been good. We made our way back to the room for a bit of a rest before heading back out and around town. 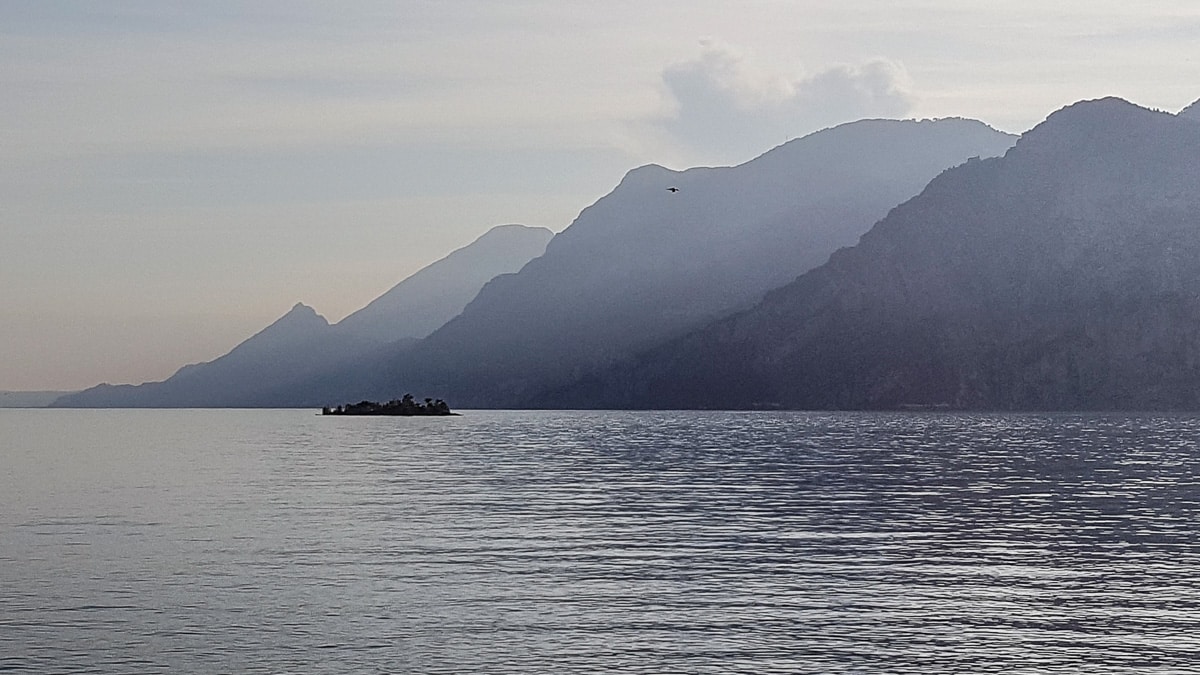 This time we wandered south along the lake-side promenade, and outside the busy tourist zone which was getting even more crowded. After a while we came across a small cafe overlooking the lake, a great spot for a beverage and snacks, and we sat a while watching the world go by.

Eventually we went back into town for dinner, to the other restaurant we had chosen Vidoc,. Jeannie had pork, Chris had their local specialty – Gnocco fritto e tigelle, light, delicious, puffy breads and tagliere di salumi e formaggi, a salami and cheese plate.

It was well after dark when we finished dinner, but there was still time for another stroll before turning in. We set the alarm again … we want to catch the early ferry to Riva. 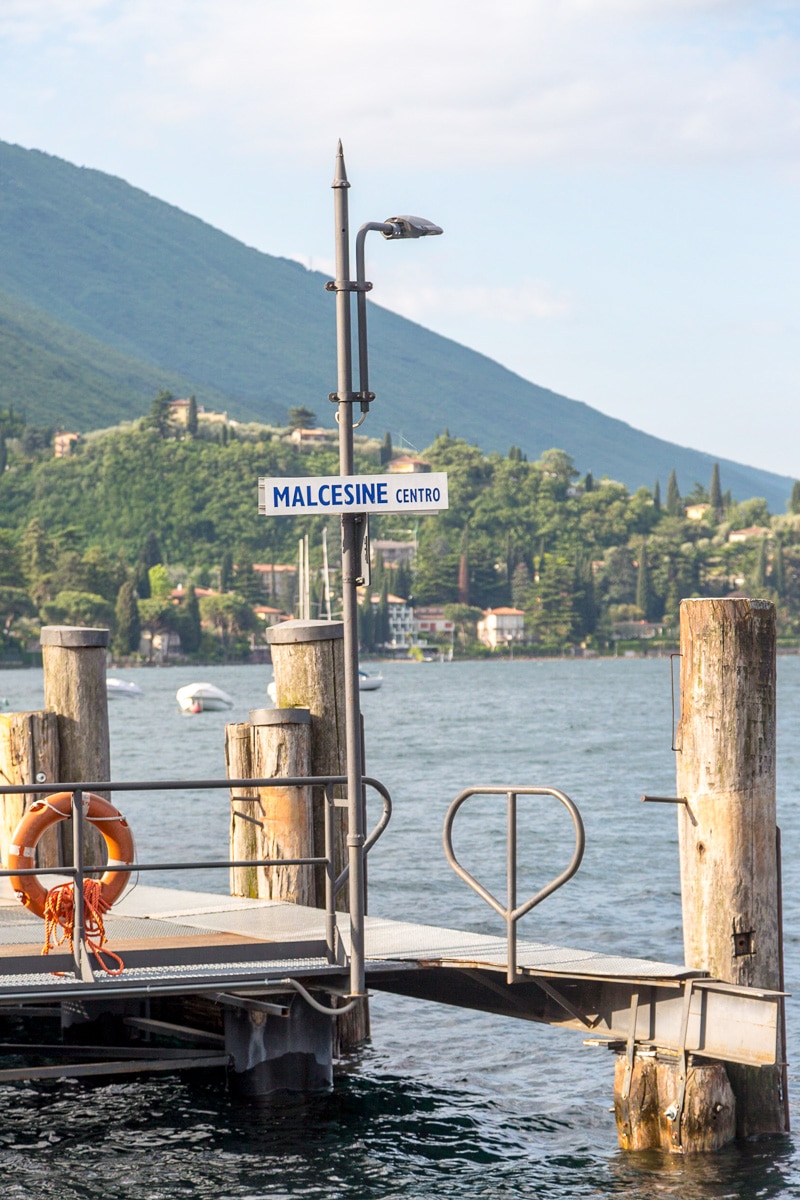 The sky gets very bright before 0600h in this part of the world, and while the sun didn’t peek over the mountain until later, the morning light woke us early. Off to breakfast, check-out, and on the docks for the 8:55 ferry.

It was windy and somewhat cloudy, but not a bad day. The ferry sailed over to Limone to drop off and pick up passengers, then to Torbole. In route there was an amazing amount of recreational activity on the lake. Sailing, kitesurfing, sailboards, parasailing – there were so many sails moving across the lake and in the air. 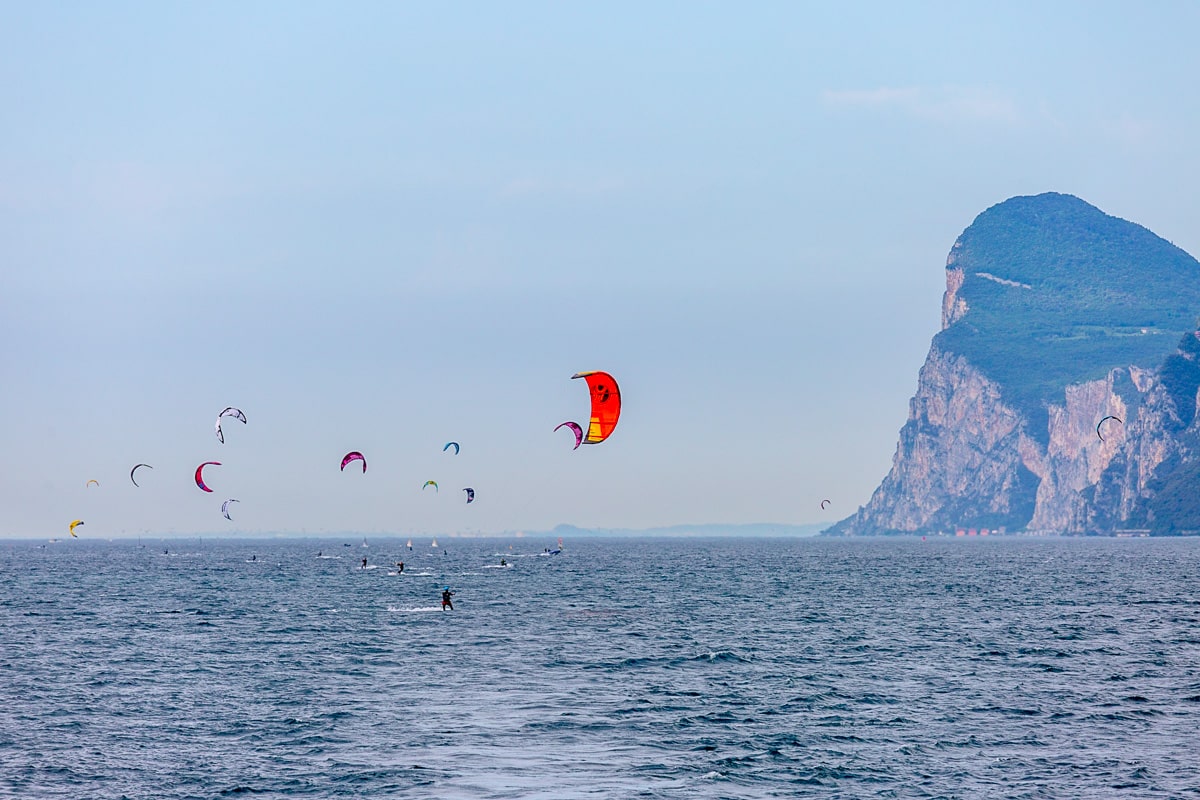 We arrived at Riva in just over 1 hour. On the way to the TI to get a map, we stopped for a cappucino and oriented to where we would need to pick up the bus later. Then it was off to wander.

Cyclists and pedestrians were everywhere!! There were beautiful gardens and green spaces all along lake. 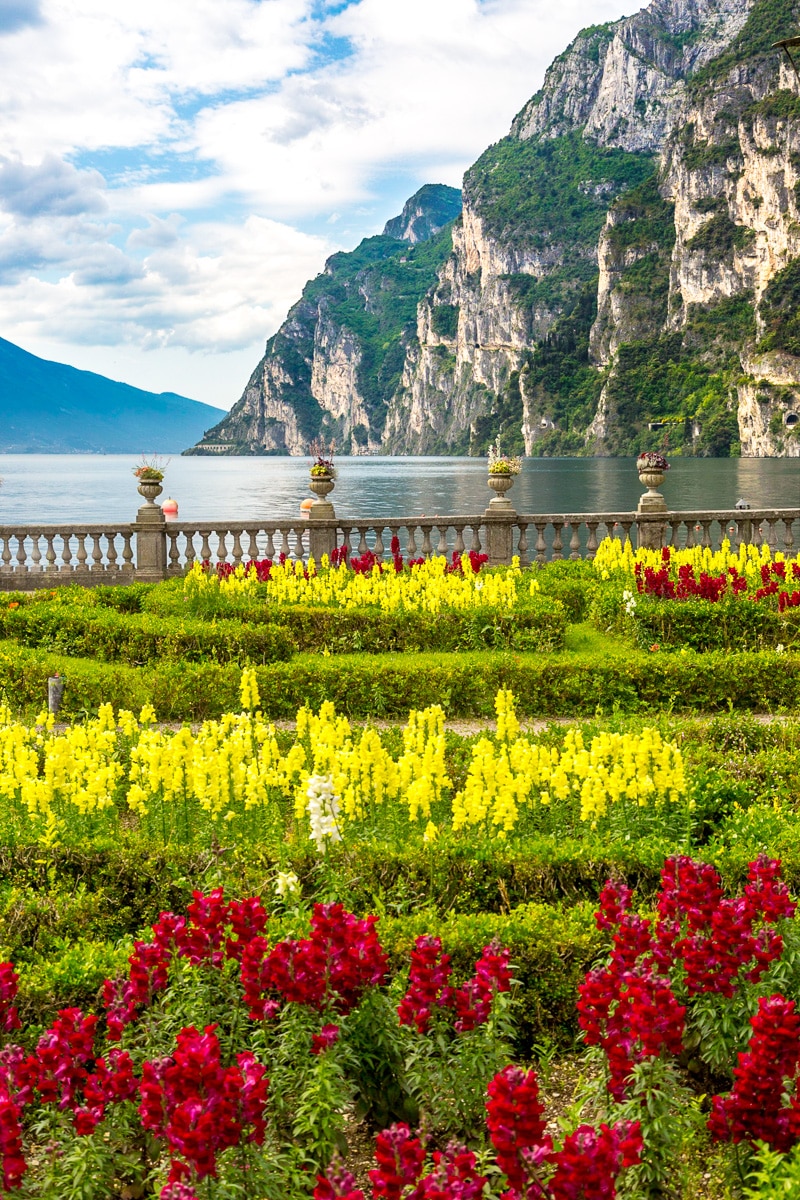 There was a  feeling that one could wander here and into the surrounding mountains forever. We had talked about walking to Torbole and getting bus from there, but the sky was becoming more threatening, and our backpacks weighed a bit much for too long a walk.

After grabbing a light lunch, we strolled to the bus station to catch the bus back to Garda where we barely missed a rain shower, then to again change buses back to Verona. Once again we timed the departure to coincide with the school students who were returning to their homes all along the lake. We got seats, but the bus was packed, yet became less so as we progressed.

In spite of getting drenched by a rain storm as we stepped off the bus and all the way back to our apartment in Verona, it felt good when we finally arrived home. It had been a wonderful two days taking in some of the sights along one of Italy’s famous Lake Garda.