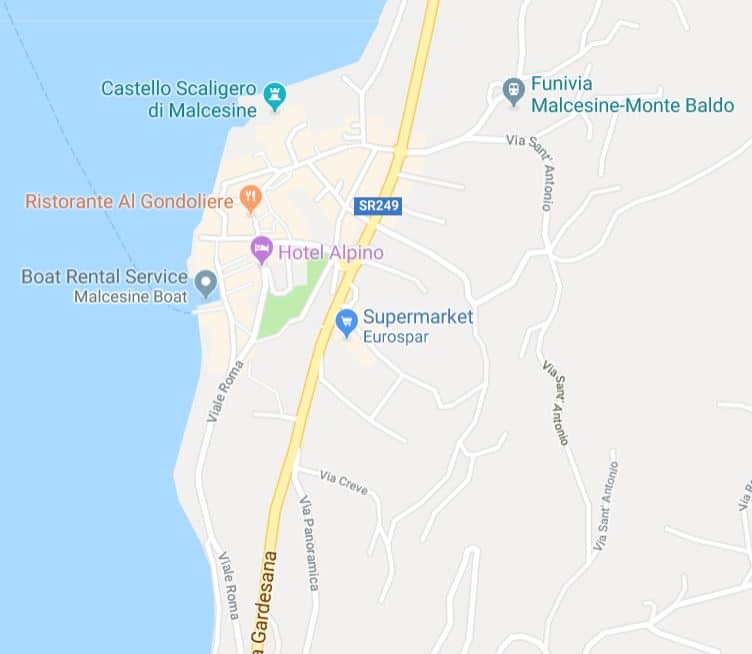 Our brief day-trip to Peschiera made us want to return to Lake Garda soon. Checking the weather forecast (that fluctuates frequently), it looked like we’d have a good chance of only a little rain and some otherwise good weather over the next few days. So we quickly put together our plans to spend two nights in the small lake-side town of Malcesine (mal-CHEZ-i-neh).

Reservations were made for two nights at a small hotel in the center of town, and three-day bus passes covered transportation. We packed our backpacks and got a good night’s sleep for the following day’s busy schedule.

The next morning I had a dental appointment to be fitted with an overlay for a cracked tooth, and would pick up some panini (sandwiches) to eat before catching the bus. Being just a 15-minute walk to the bus/train station certainly has its advantages.

All went well at the dentist, then on the way home bought sandwiches, we ate, finished packing, and soon left for the bus station. Arriving at the station, we located our platform but found that multiple buses leave from Verona to the town of Garda where we would have to change. As we started to get on one bus, it was standing room only. Evidently we were going to be riding the bus filled with high school kids.

Then the next bus arrived almost immediately so we jumped off and boarded the other. Initially we each got seats, just not together, and after about an hour to Garda, there was a short wait to transfer to the next bus to take us to Malcesine. All the while we were hoping the weather would stay good.

On our arrival in Malcesine, we got our bearings and walked the short distance to the hotel where, during the check-in, we were informed that our passports were required. Panic! As we have traveled over four years in Europe, our US driver’s licenses have always been adequate and we had left the passports locked in our room in Verona. It took a while, but using our “smart phones” we finally accessed our secure files with digital images of our passports which were accepted.

Our digital files (images of all important and necessary documents) are secure and encrypted behind very strong passwords. Meant to keep the bad guys out, it also means that it can take time to “unlock” all of the locks. 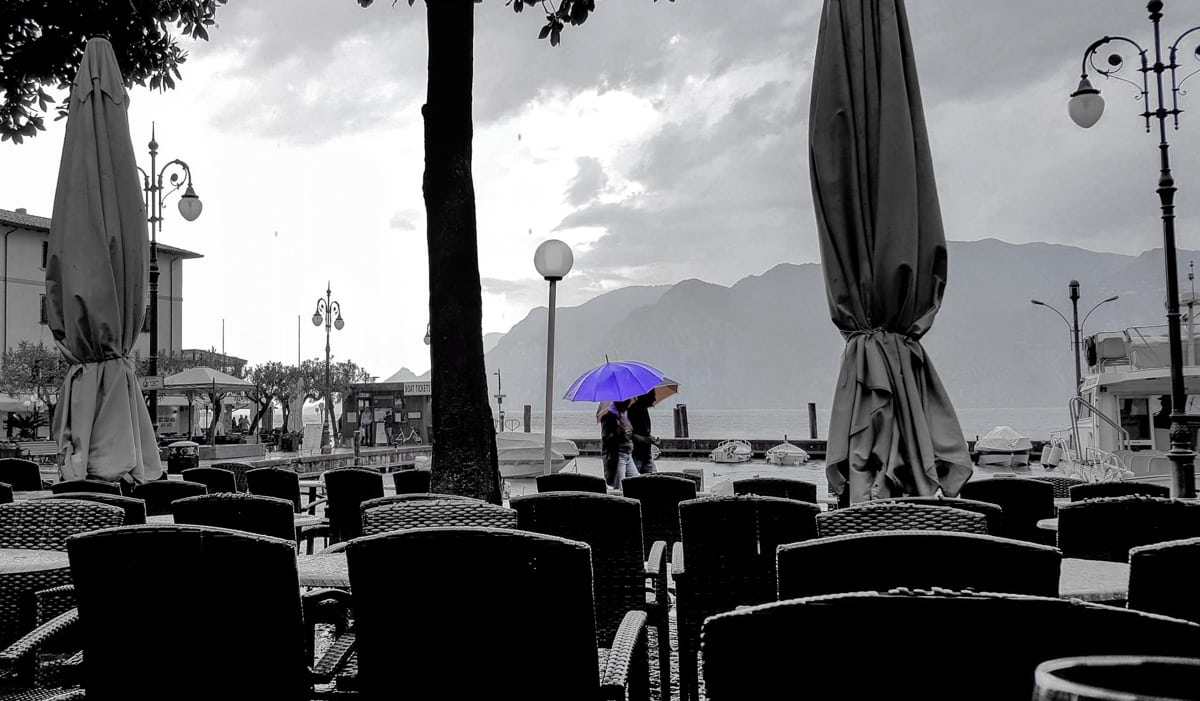 Disaster averted, we were shown to our room. It was clean and adequate with a tiny balcony barely large enough for a small table and chairs. There was, however, a nice view of the mountains.  We dropped our gear and headed out, prepared for rain as it was near.

Not long after we left the hotel the rain began to come down.  We ducked under the awning of a cafe that looked out over the small harbor to the lake and mountains beyond. Settling in under the shelter, we ordered wine and watched the rain come down harder and harder. 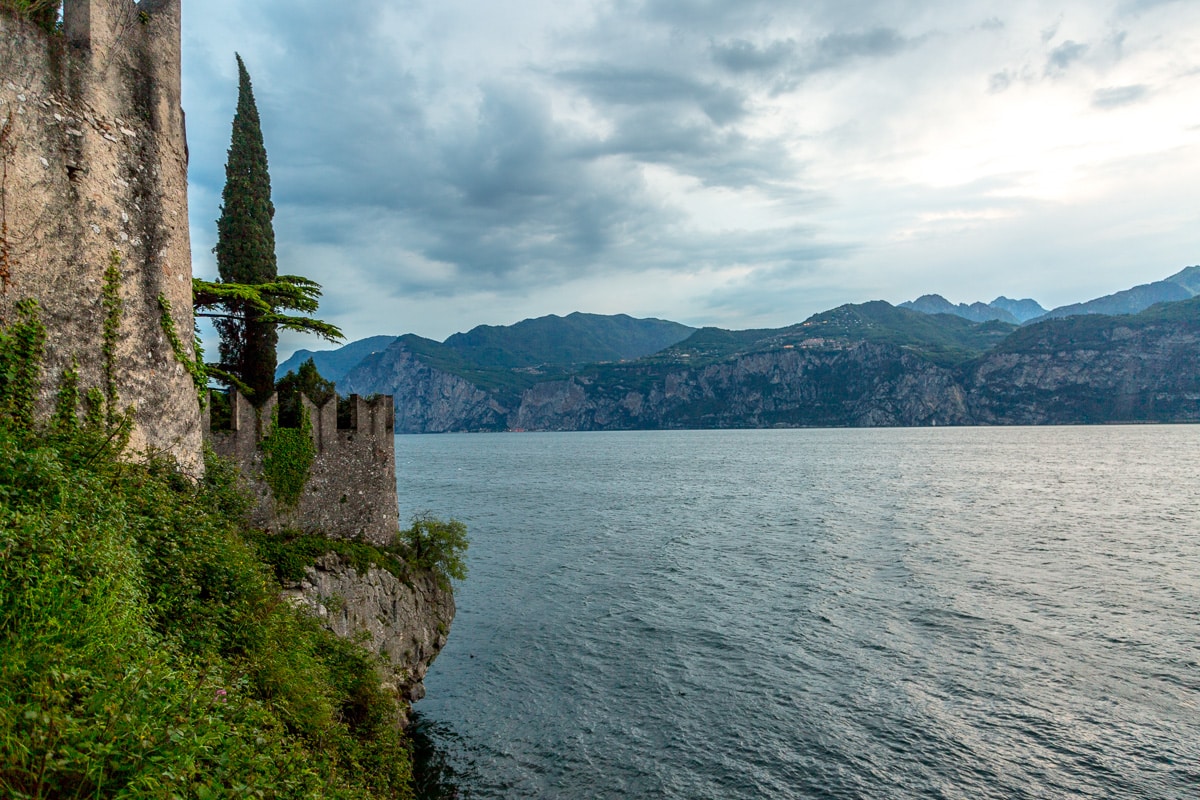 Sipping our wine slowly, we enjoyed the view, and listened to the soft drumbeat of the drops on the canopy. The rain ended just as our glasses emptied, so we walked toward the restaurant we had chosen and noticed that there were people seated already. Though it was only 1830h (6:30pm), we decided to go on in, as we didn’t have reservations and not knowing how quickly places might fill. We were seated quickly, and it wasn’t long before the place was turning away customers. 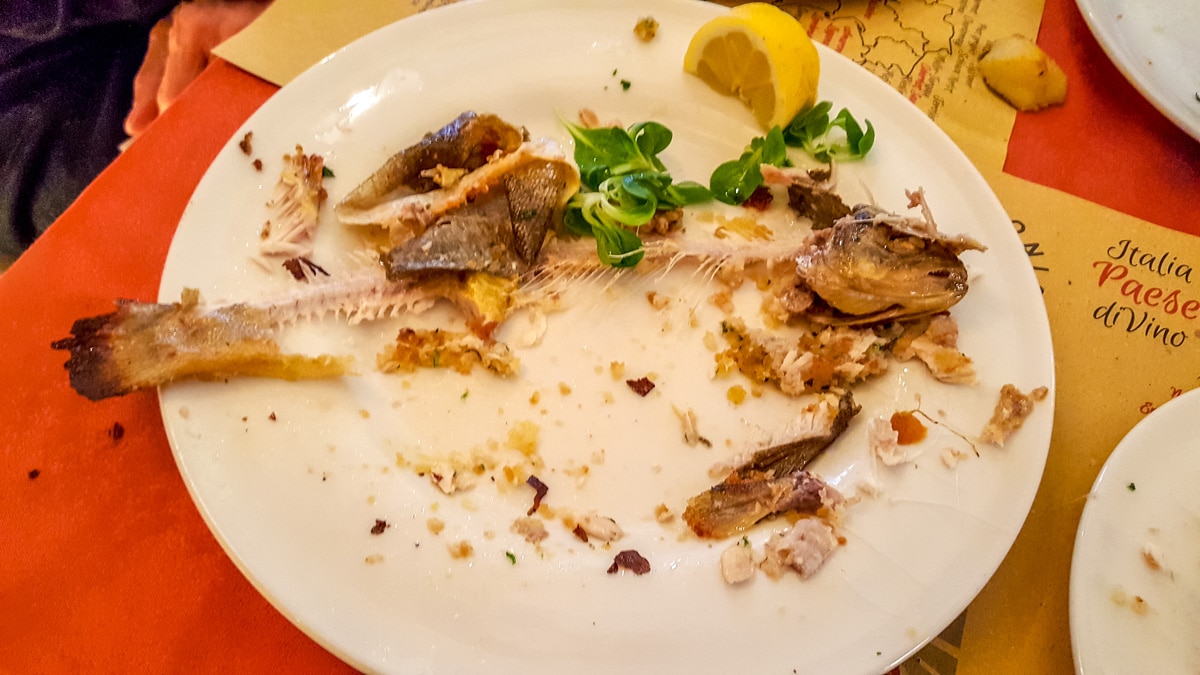 The menu was filled with delicious options, but we asked our waitress what was best and local, she quickly recommended the fresh fish from the lake. We first shared a tagliatelle with fresh asparagus as the first course, and then shared the fish as well. Grilled whole and filled with a highly seasoned stuffing, it was served with carrots and potatoes. Together with a half-liter (mezzo liter) of house white wine, and a couple of caffè macchiatos to finish, it was an incredibly delicious meal. 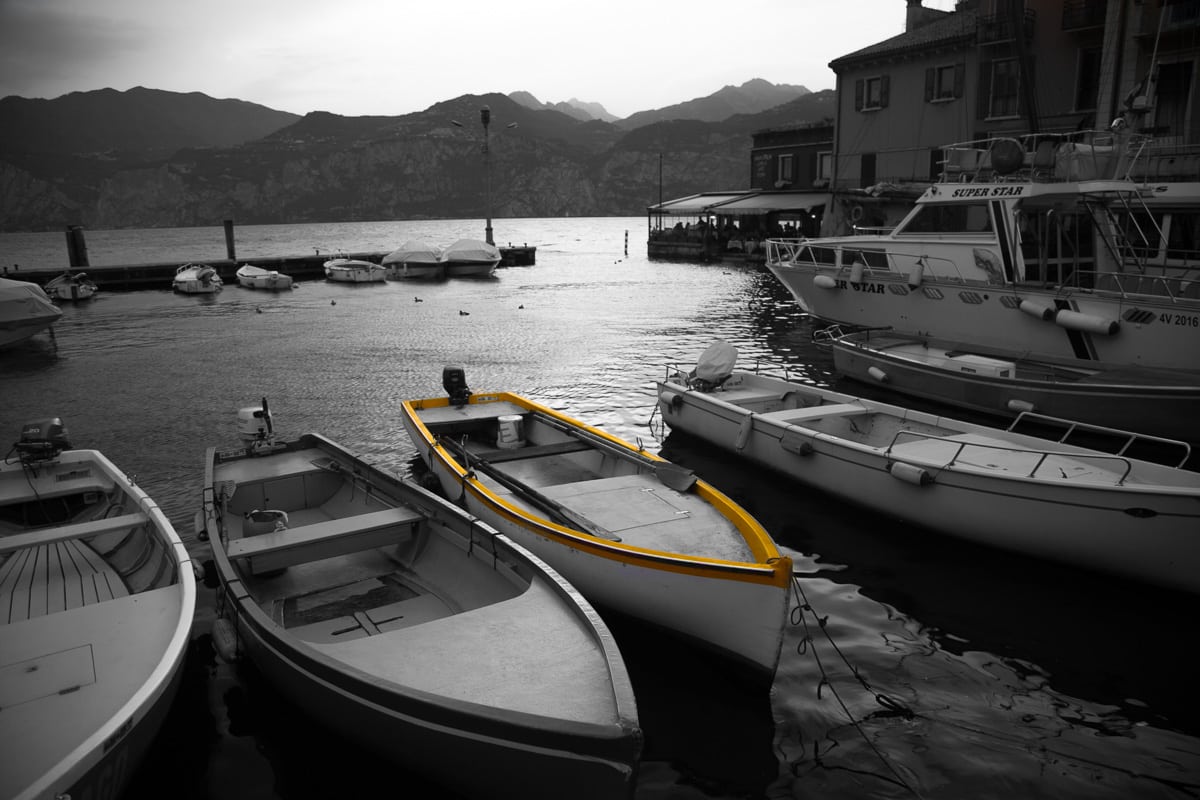 When we walked out of the restaurant after dinner, the rain had stopped. The air was cool and clean, and the crowds of tourists were gone. So we wandered the dimly lit, ancient cobbled streets. The lights of the towns and villages over Lake Garda and across the mountains sparkled across the water. The small waves from the lake made their own music as the little fishing boats rocked gently in the small harbor. The desire to stay out and wander further amongst the fairies and sprites was strong, but it was time to turn in, and tomorrow was looking to be better still.