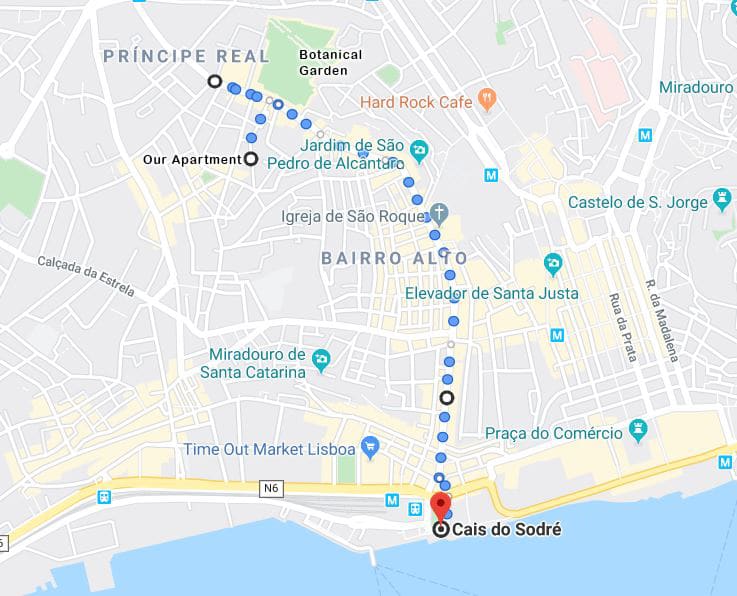 The first week in October 2019 – After Porto and Évora, we weren’t sure what to expect from Lisbon (Portuguese: Lisboa). As the capital and the largest city of Portugal, with about 3 million people in the Lisbon Metropolitan Area, we at least expected a bustling, busy city.

Positioned where the Rio Tejo (Tagus River) and the Atlantic Ocean meet, it is thought that the Phoenicians explored the area in the 12th Century BCE and created a colony and commercial port on the northern bank of the Rio Tejo.

Lisbon was integrated into the Roman Empire in 138 BCE, and like Rome, was built on seven hills depending on how you count. Let’s just say that, under the Romans, the city did develop across several steep hills until the fall of the Empire in the early 400s. 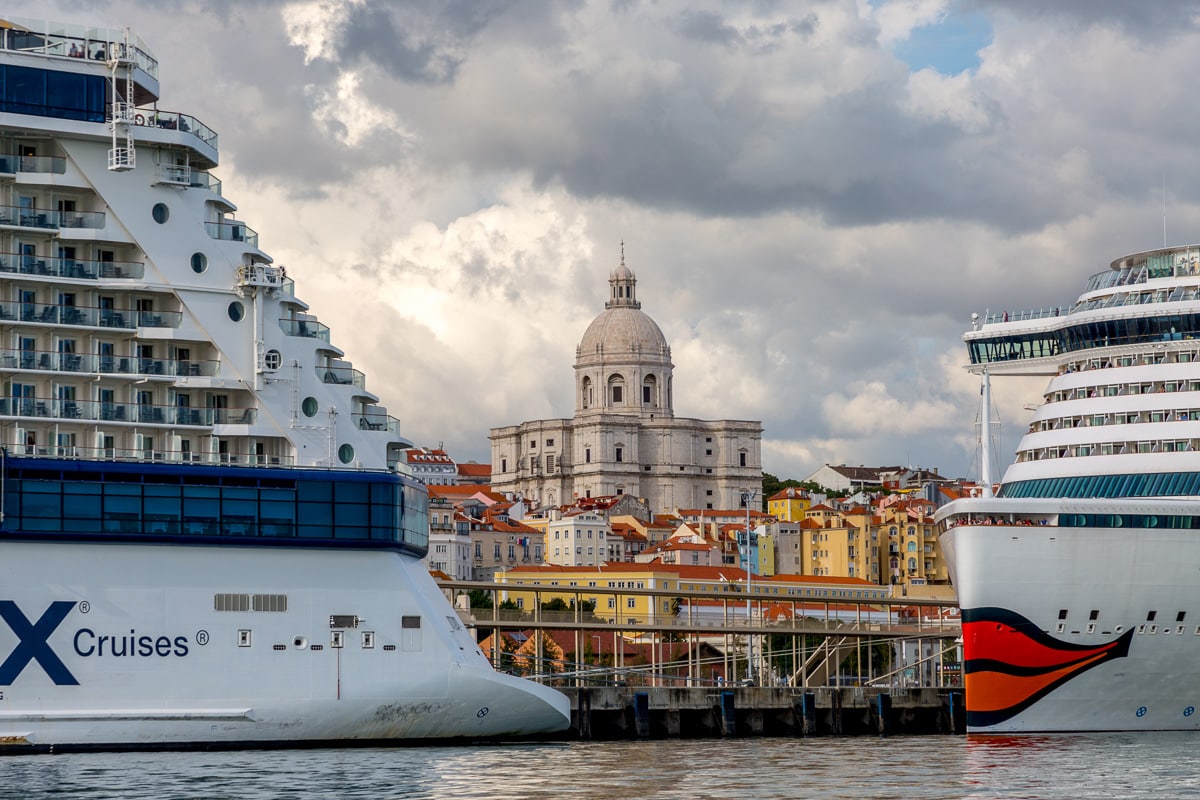 Today, the Port of Lisbon is considered one of the most beautiful and busiest natural harbors in the world.  Cruise ships routinely make calls to its port, and traffic estimates for 2020 predict more than 1,000,000 passengers and crew to the city. Overall, in 2017, Portugal had 23 million international and domestic tourists. Lisbon is joining the ranks of the number of cities, worldwide, that are suffering from over-tourism, and has even inspired a website devoted to the problem: http://www.lisboa-does-not-love.com/en

As we travel, we try to be mindful of our impact on the places we visit. Since we have longer to stay in any place, we can distribute our sightseeing visits to avoid the masses. However, it can often be impossible to avoid being a part of the problem. All of that said, Lisbon wears the crowds well.

Our home in Lisbon was located in the attractive Príncipe Real (Royal Prince) neighborhood, named in honor of Queen Maria II’s firstborn (Pedro V, 1837). Sitting high atop one of Lisbon’s seven hills, it was until recently only known for its antique shops and gay bars. But even though it remains essentially a residential district, filled with gardens, a couple of the city’s most tranquil squares, and colorful mansions it has some great restaurants, shops, a vibrant nightlife, and some stunning attractions of its own.

This charming, compact neighborhood is perhaps not on the must-see list of most tourists who tend to stick to other more popular districts, but it still has its crowds. We found it a delightful base from which to explore Lisbon, so it is fitting that this first post in this city begins here and then descends down to the waterfront. 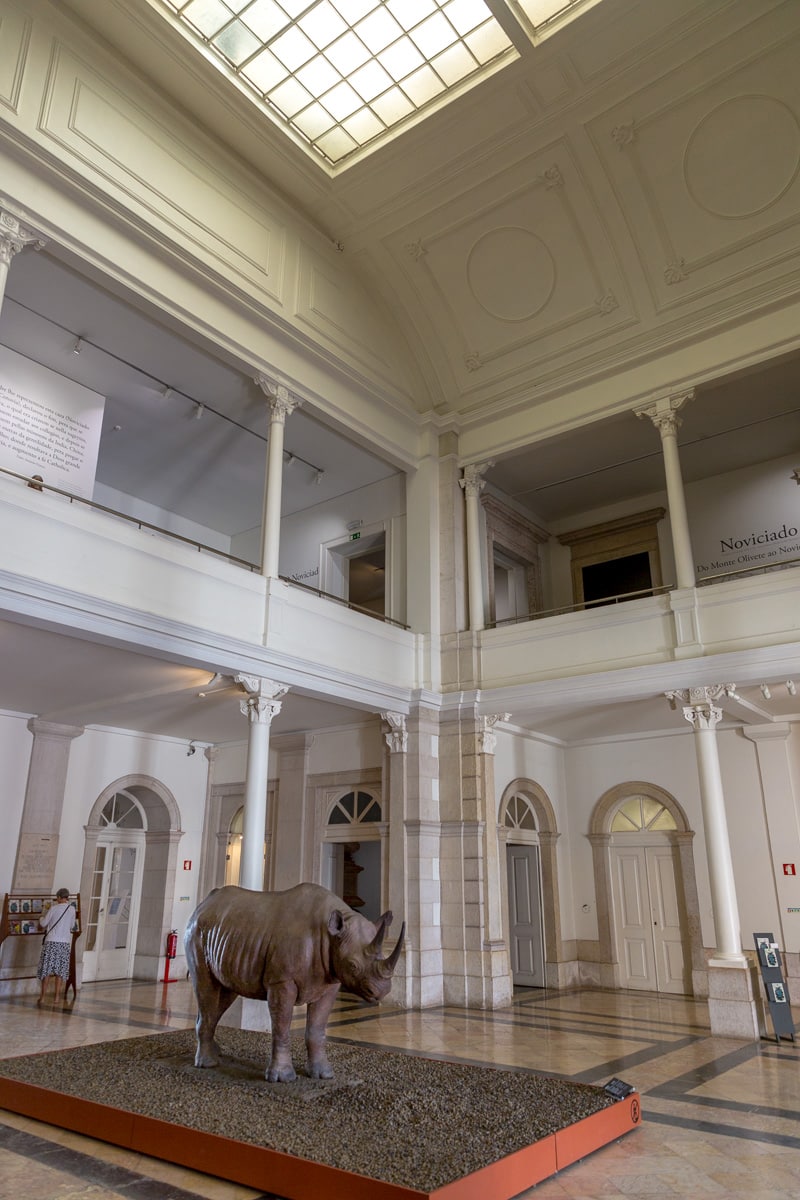 The center of Principal Real is the Jardim do Príncipe Real, a proper garden and popular gathering spot for locals and tourists alike. Most of the major shops and restaurants of the district are located along the main road. Also running along this street which changes names every few blocks, are tram and bus routes, which allows for convenient connections to the rest of the city.

West of the Jardim do Príncipe Real, is the extensive campus of the Museu Nacional de História Natural e da Ciência (Museum of Natural History and Science) with its 19th-century Laboratorio Chimico (Chemical laboratory) and its impressive lecture amphitheater. Contemporary displays included special exhibits on whales, oceans, dinosaurs, and a fascinating ethnological/architectural study in the west-African country of Guinea-Bissau. In 1959-1960, the authors traveled all over Guinea-Bissau with the aim of documenting the culture and technologies of the native peoples. 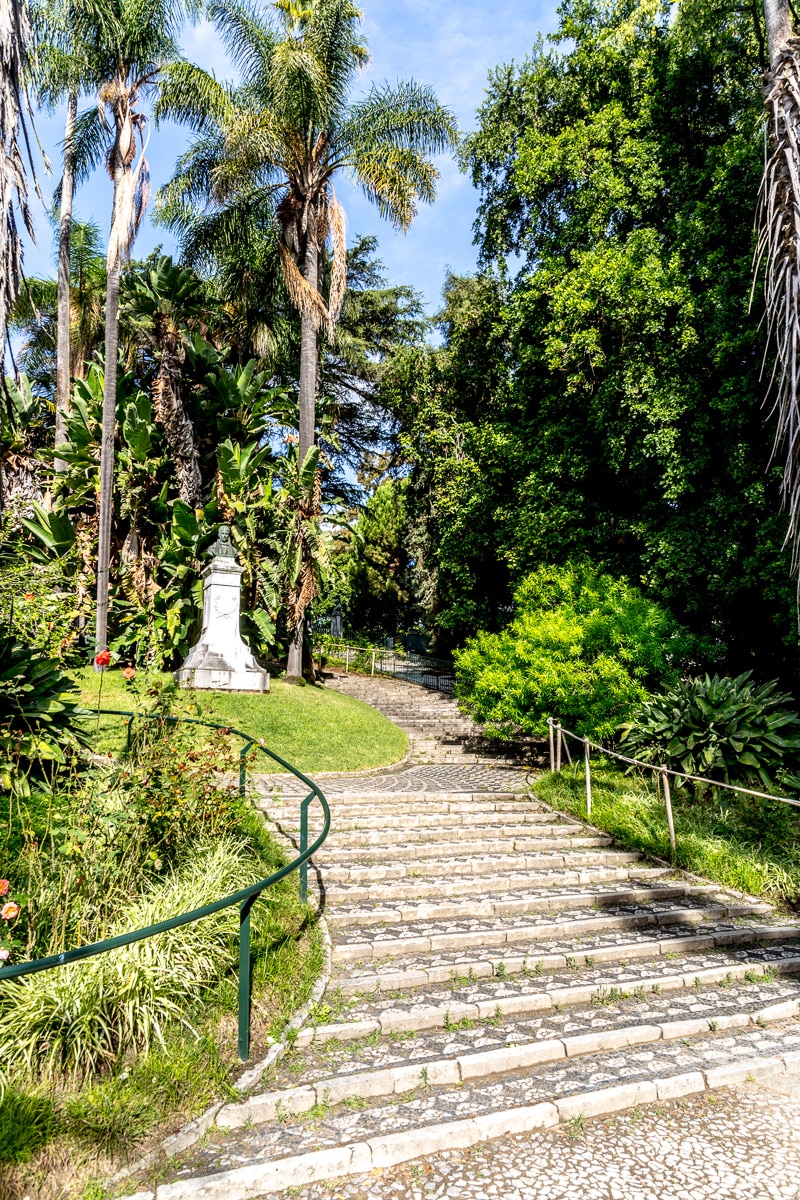 While the Museum has its origins in the 18th century, the adjacent Jardim Botânico de Lisboa (Botanical Garden of Lisbon), covering over 4 hectares (10 acres), already had more than two centuries of tradition in the study of Botany. It began with a Jesuit college based here between 1609 and 1759. These enchanting gardens, almost invisible from the surrounding streets, were once considered the best botanical garden in Southern Europe, and they still have one of the largest collections of subtropical vegetation on the continent. 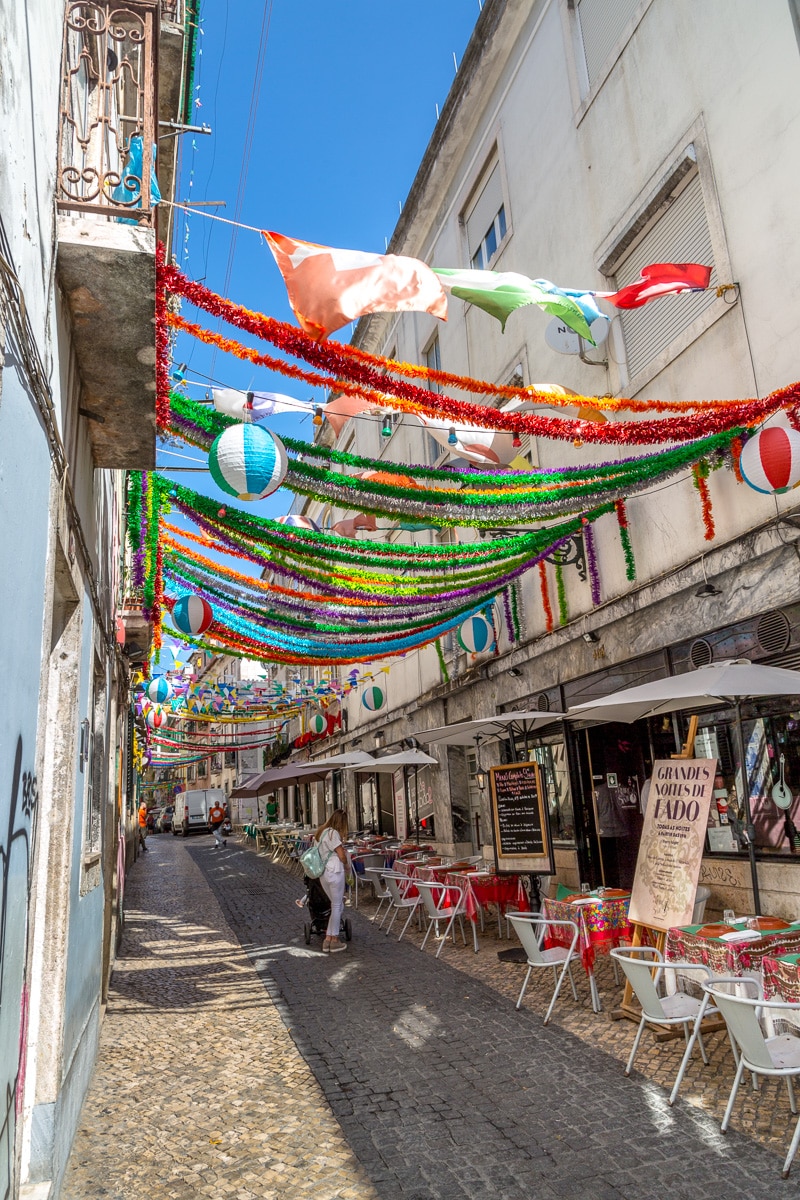 Though the gardens were undergoing renovation while we were there, the views out over the Avenida da Liberdade, the Praça dos Restauradores, and over to the hills opposite, including the Castelo de Sao Jorge were spectacular, especially at night.

Continuing downhill and south, away from Príncipe Real, we pass through several bairros (neighborhoods) each with its own flavor and history. Bairro Alto is – as the name suggests – uphill from most of downtown Lisbon and is best known for its dynamic nightlife. Further down, the Chiado neighborhood, a cultural and commercial district, is known for its luxury shopping, historic landmarks, and its numerous theatres and museums.

And finally, the Cais do Sodré at the Rio Tejo just to the south is at the bottom of the hill. Cais do Sodre is the cool and trendy district of Lisbon. Once neglected, it has been renovated and is now fashionable, as new shops, cafes and bars open. The Timeout market is a grouping of tourist-centric, independent food stalls housed under the same roof as the colorful Municipal Market where residents shop daily for locally grown produce, freshly caught fish and traditional products. 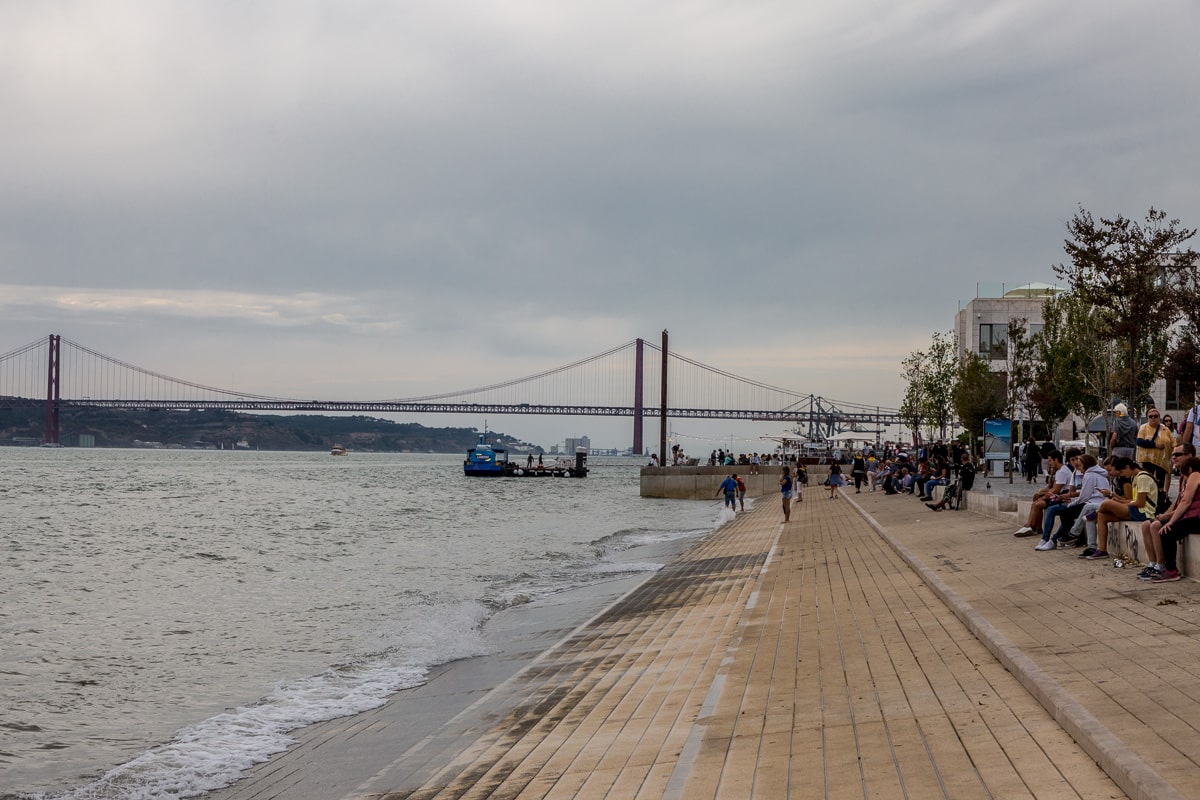 Indeed, the entire waterfront between Cais do Sodre and the Praça do Comércio to the east was redeveloped starting in 2013, but because of delays wasn’t finished until 2018. Today, the simple relaxed feel of the Ribeira das Naus makes it an ideal promenade for a stroll along the river.

This is just the start of our explorations of this incredible city, and we can already tell that even with five weeks we will only be able to scratch the surface.