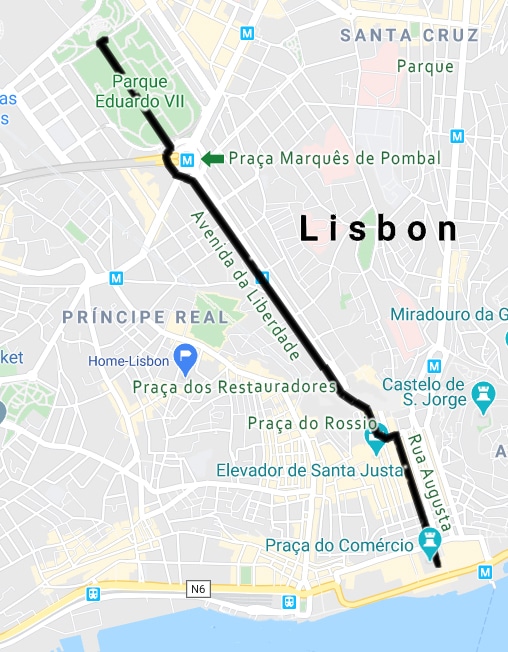 October 2019 – Lisbon is a wonderful place to walk. This is true in spite of the hills since there are ways to avoid some of them by using public transportation. We took a very interesting stroll that began near the center of the city, in the Parque Eduardo VII, high above and 3.2 K (2 mi) away from the riverfront.  Named after the UK’s King Edward VII, who visited Portugal in 1902, this public park covers 26 hectares (64 acres) and looks out over the Praça Marquês de Pombal, the Avenida da Liberdade, and beyond to the Rio Tejo (River Tagus).

As we wandered downhill under the shade of large plane trees that line this side of the wide promenade we admired the broad parterre of neatly clipped boxwood hedges that crisscross the lawn. In the distance, a dog or three could be seen dashing in and out of the shrubbery.  All the while, whenever we looked up from the decorative patterns in the sidewalk, the sweeping view all the way to the river and beyond is stunning. 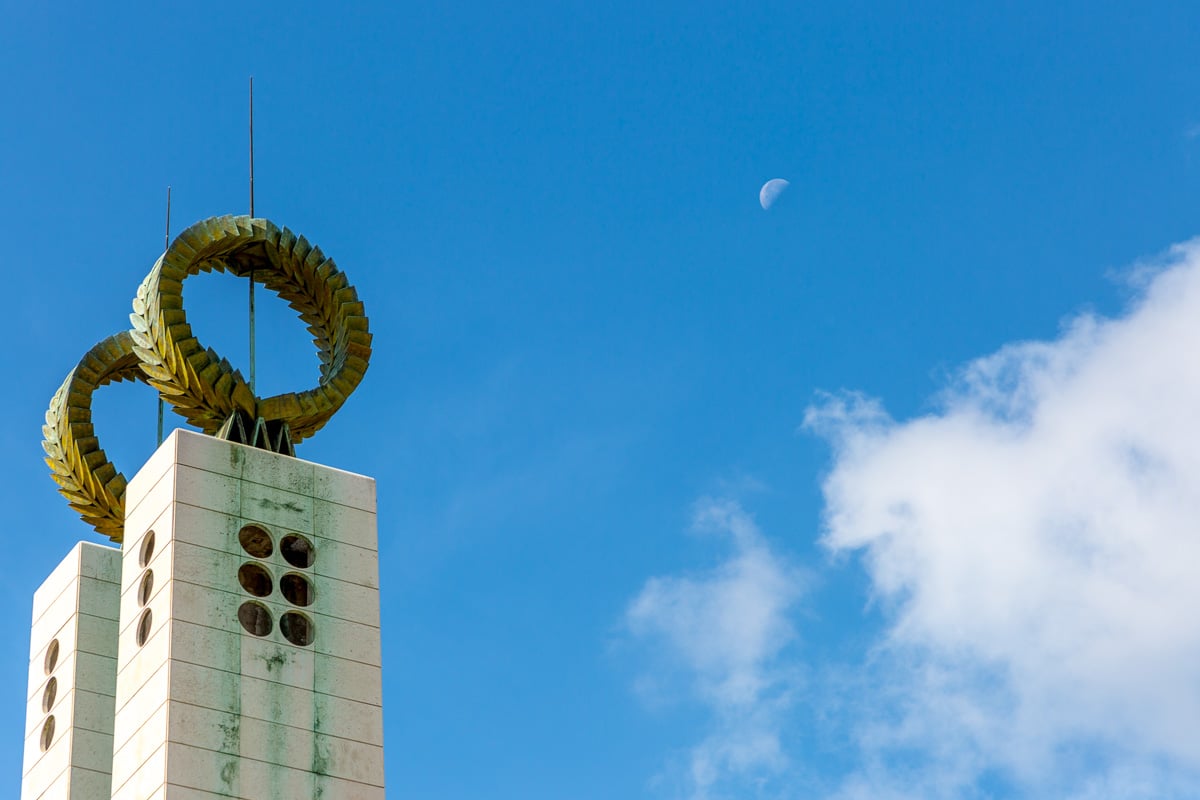 It wasn’t long before we arrived at the Praça do Marquês de Pombal (Marquis of Pombal Square), a massive and important roundabout in the city. In the middle of the traffic circle, there is a large column dedicated to the Marquis of Pombal, the powerful prime-minister who ruled Portugal from 1750 to 1777.

After making our way around the heavily trafficked roundabout we continued our downhill direction and shortly we entered the Avenida da Liberdade. 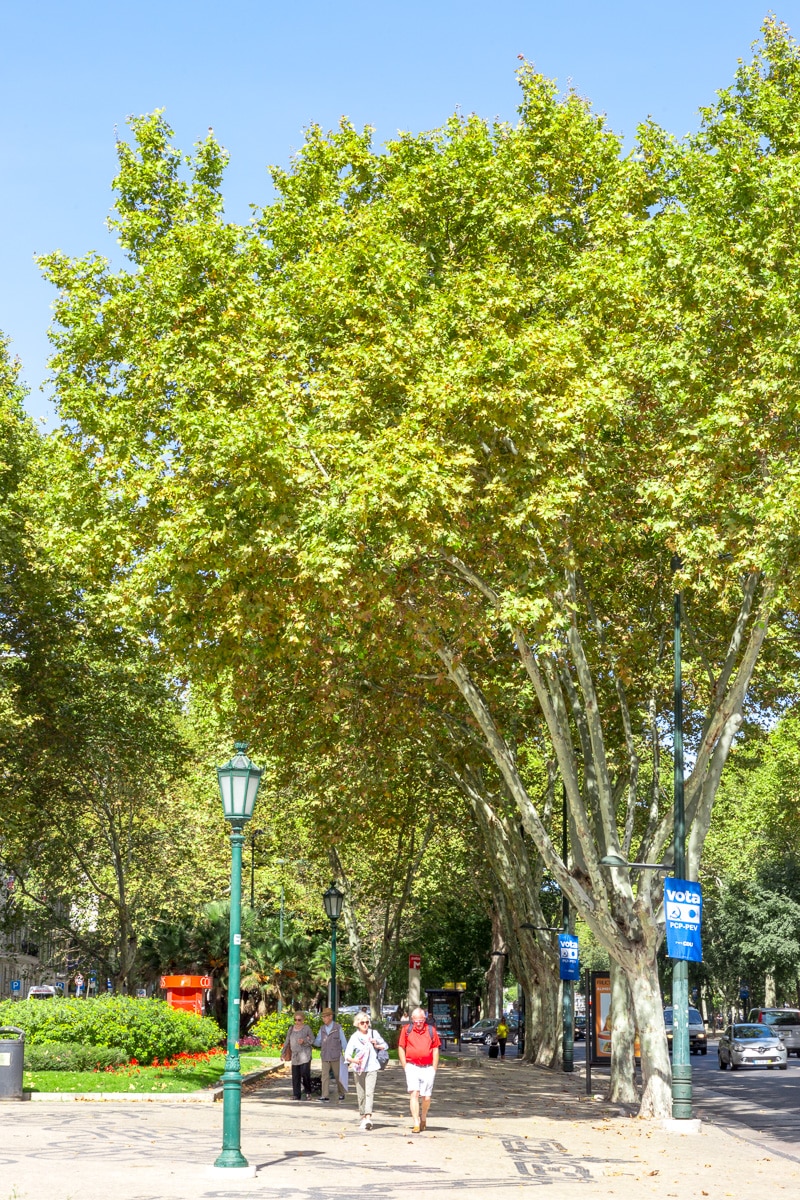 Reminescient of Avenue des Champs-Élysées in Paris, the Avenida is a beautiful, 90 meter-wide (300 ft), tree-canopied boulevard, 1100 meters (1203 yds) long, with multiple lanes divided by pedestrian pavements decorated with gardens, and lined with shops, cafés, and offices.

The sidewalks are all a continuous black and white mosaic of Calçada Portuguesa, the limestone cubes hand-shaped and placed by skilled craftsmen. The designs are most often geometric but may be human or animal figures, or some specific design depending on the particular location and the trend of the day.

The dense, green canopy of trees made for a forest-like feel to the busy, commercial street, and together with the gardens that occupied the wide pedestrian areas on both sides of the Avenida, it was curiously peaceful in spite of the traffic. 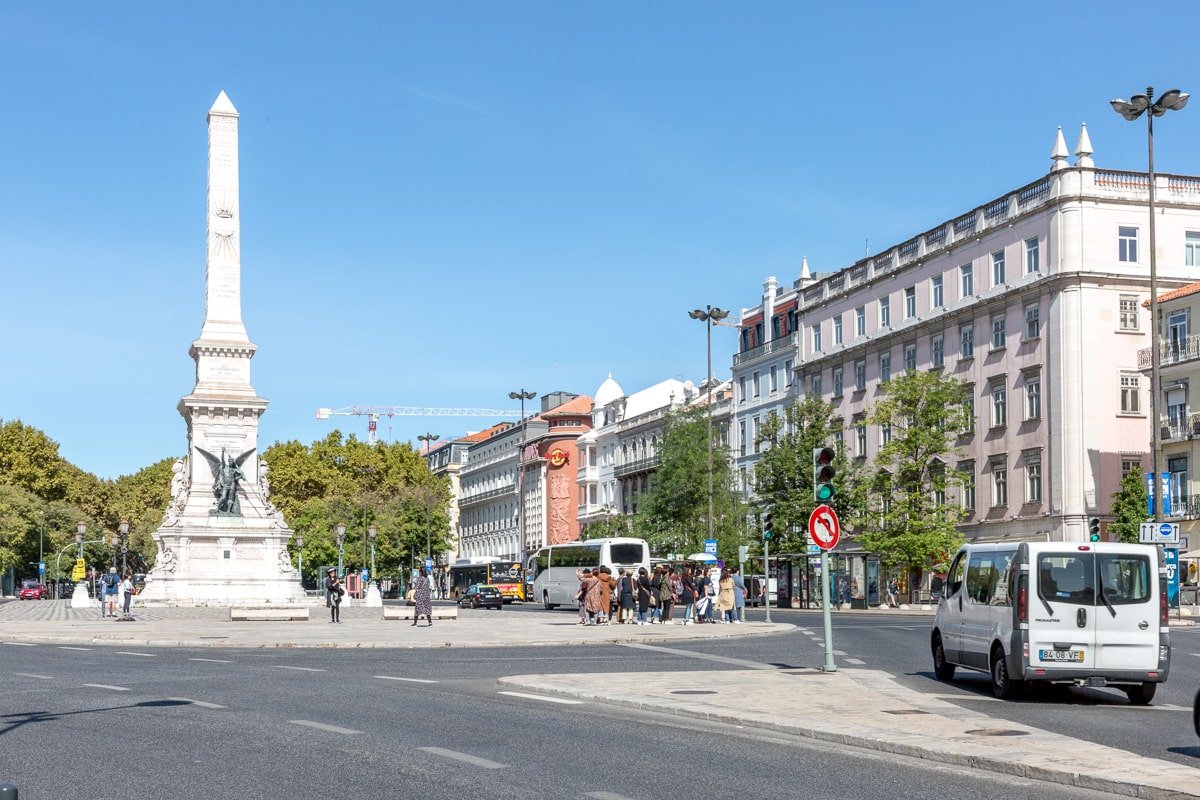 Walking out from under the canopy of the Avenida da Liberdade, we entered the Praça dos Restauradores or Restoration Square, named to celebrate Portugal’s freedom in 1640 after 60-years of Spanish rule.

At the center of the Praça dos Restauradores stands a 30m high (98 ft), monumental obelisk that dominates the entire plaza. The Estação de Caminhos de Ferro do Rossio or Rossio Railway Station is located on the Praça, and since 2003, so has the Hard Rock Cafe – Lisboa. 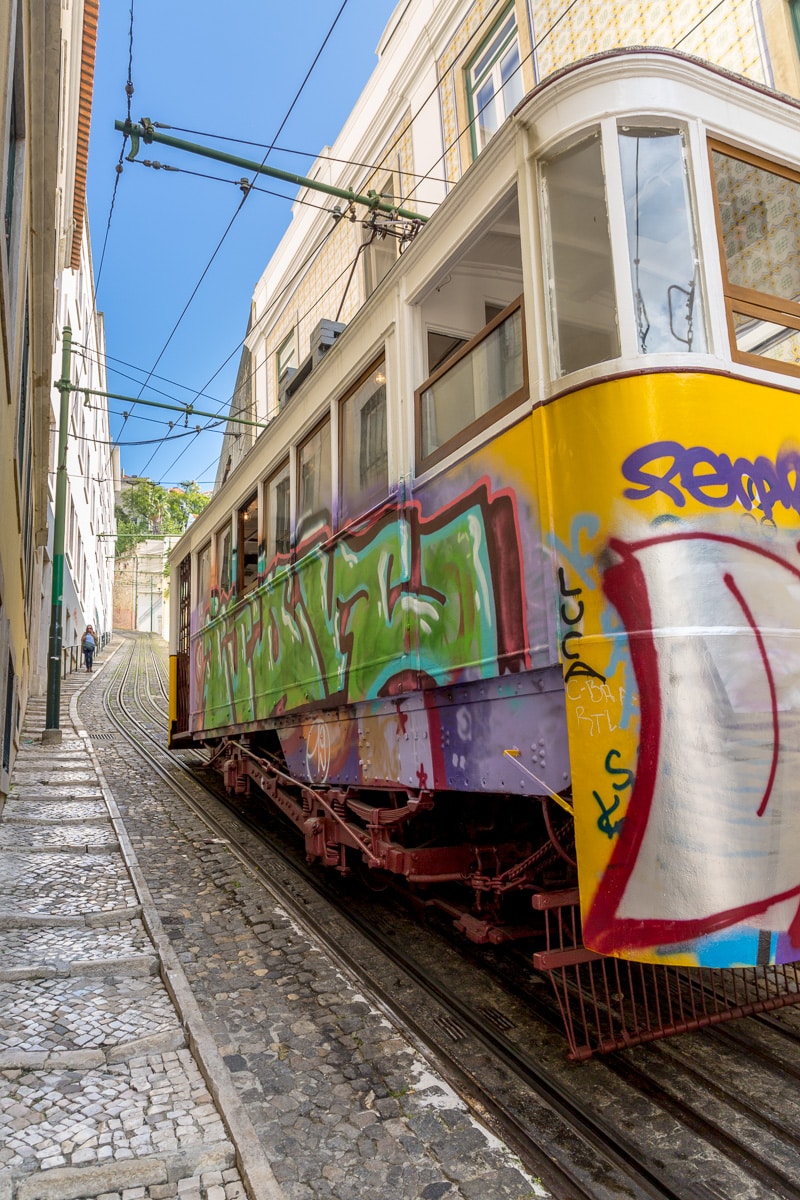 Since the Avenida da Liberdade and the Praça dos Restauradores lie between two of Lisbon’s seven famous hills one must climb steep streets or hundreds of stairs to go east or west. Or, one could just take the Elevador de Santa Justa or Santa Justa Lift (which we didn’t do) or one of the funiculars, such as the Ascensor da Glória (which we did do multiple times), Lisbon’s second-oldest funicular in operation since 1885 to get to the surrounding hilltops.

Continuing our descent towards the river, we next came across the Praça do Rossio, Rossio Square or just Rossio, which is the way locals of Lisbon refer to the historic Praça de Dom Pedro IV. It is one of the most popular public squares of Lisbon, and they say it buzzes 24-hours a day. At its center stands the 27m high (88.5 ft) monumental statue of Dom Pedro IV flanked, at each end of the Praça, by two impressive bronze fountains imported from France. 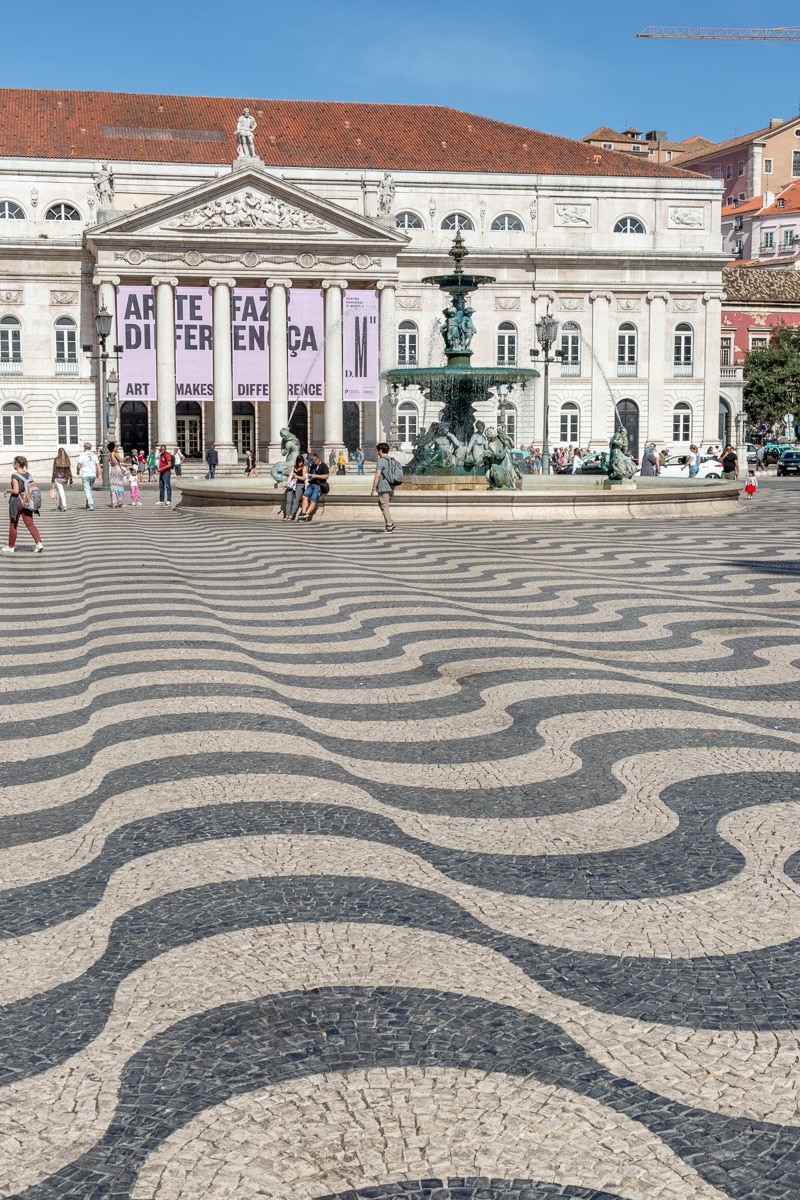 Rossio is also well known for another special feature. Its Calçada Portuguesa pattern is a wavy, three-dimensional illusion. It is totally flat, but the mind-bending wave patterns are delightfully disconcerting.

The Rossio has long played a prominent role in Lisbon’s history. Since medieval times, this plaza has seen markets and fairs, military parades, political rallies, and even bullfighting. But today the Rossio is the center of a bustling commercial district surrounded by shops, restaurants, and cafés.

Exiting the Rossio at the south-eastern corner is the Rua Augusta, a beautiful, wide, mosaic tiled street located in one of the busiest quarters of Lisbon. This popular destination is a pedestrian-only street, closed to traffic and perfect for strolling and shopping for anything from fashionable clothing to flower vendors, street cafés to hot chestnut sellers, and in the midst of it all are street performers and peddlers with wares to sell from jewelry to shoes to handbags and toys to neck-scarfs to temporary tattoos. 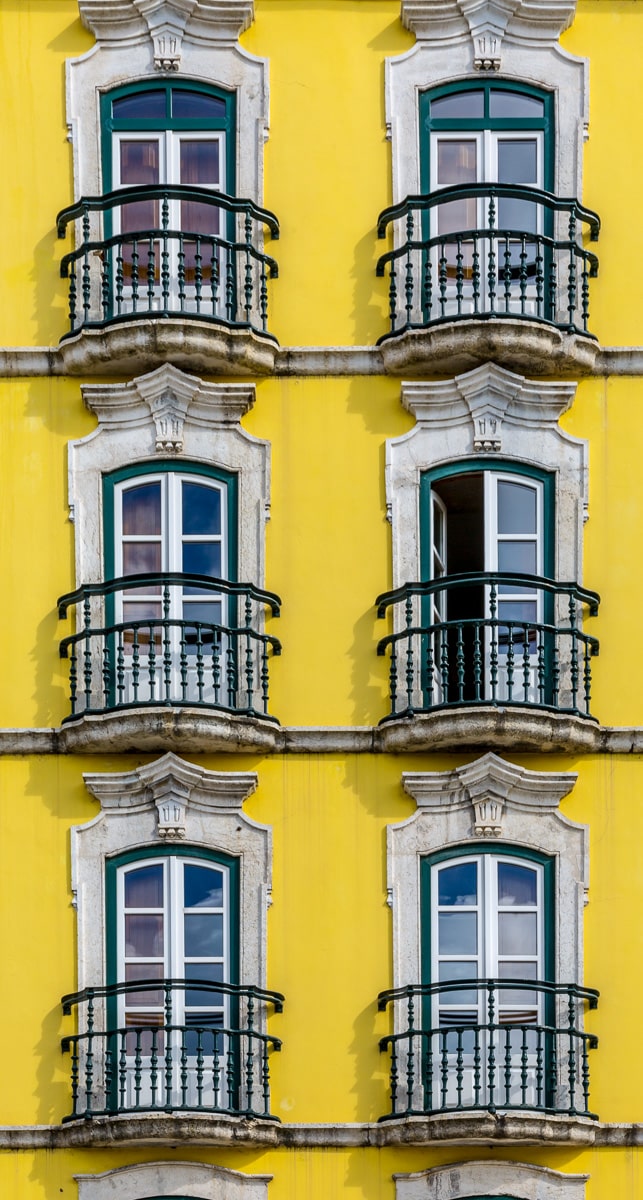 The architectural style of the area comes from the reconstruction of Lisbon made by Marquês do Pombal after the 1755 earthquake, tsunami, and three days of fire reduced the entire city to rubble. The original elegance of the reconstructed buildings is present and can be seen in so many of the structures that still appear as they were originally built.

Interestingly, the names of the streets that run parallel to Rua Augusta come from the occupations or the materials once worked on there: Rua dos Sapateiros (shoemakers), Rua da Prata (silver), Rua do Ouro (gold), and so forth.

As the Rua Augusta continues toward the Rio Tejo (River Tagus) the landmark triumphal arch comes clearly into view with the Praça do Comércio beyond. The arch was built in 1875 to serve as the gateway to the city as you approach it from the river. 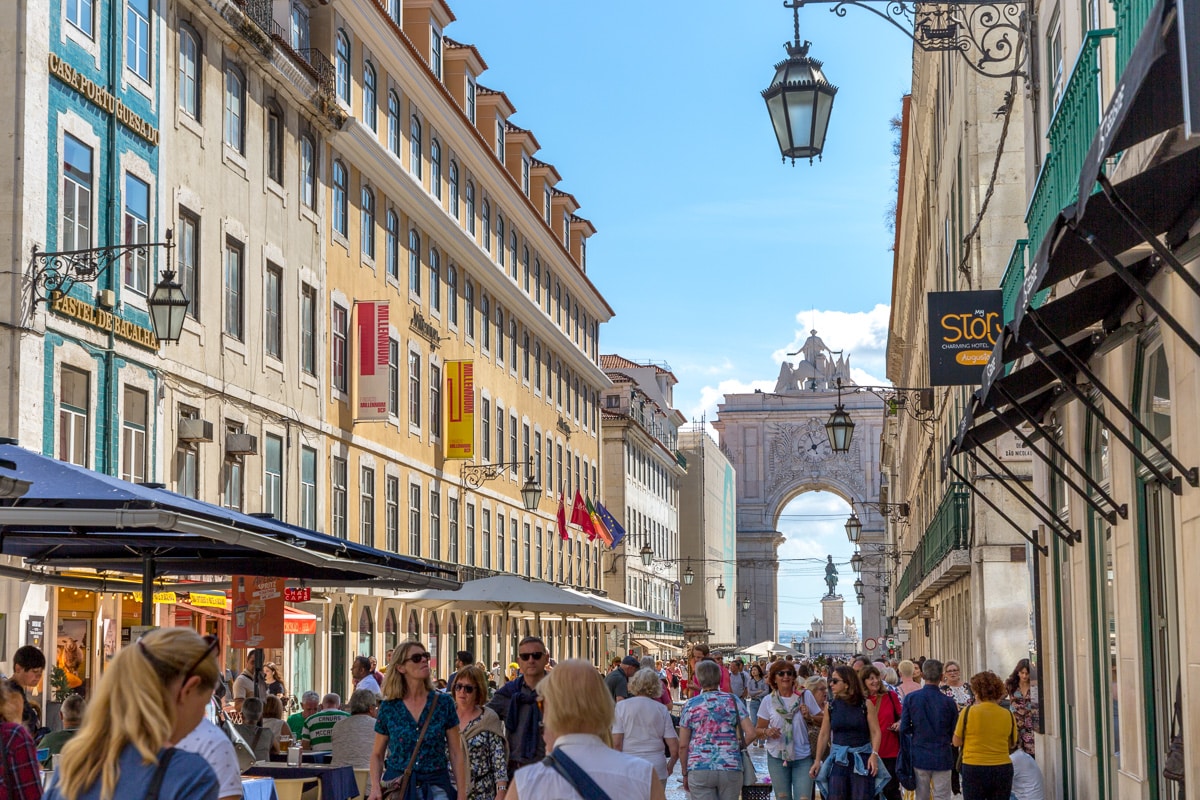 Only after passing beneath the massive arch, then through a large arcade and across a street does the size of the Praça do Comércio truly become obvious, revealing itself as one of the most beautiful squares in all Europe.

This beautiful square was originally the site of the Royal palace, frequently visited by royalty from all over Europe. They would arrive by boat disembarking at the grand waterfront and ascend the stairs to the Palace grounds and the King. 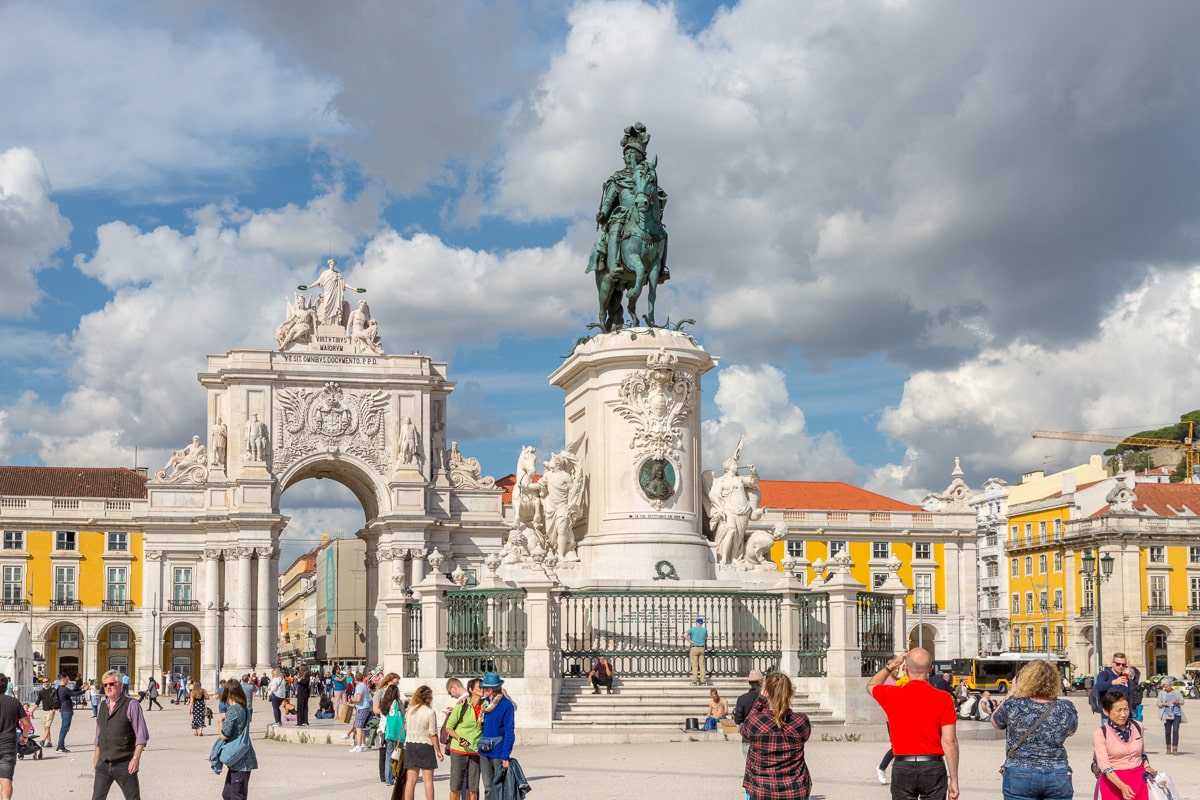 After the Palace, its square, and the city were reduced to rubble in 1755, the palace was not rebuilt. However, the square was rebuilt, and since it was no longer the Terreiro do Paço (Palace Square), it was renamed Praça do Comércio – Commerce Square.

The southern end of the square is open and looks out onto the Tagus River where, when the square was first built, commercial ships would unload their goods directly onto this square, considered the “door” to Lisbon. The other three sides have grand 18th-century buildings with canary-yellow facades, mosaic cobbles, and long arcades that house shops, restaurants, offices, and even a beer museum. 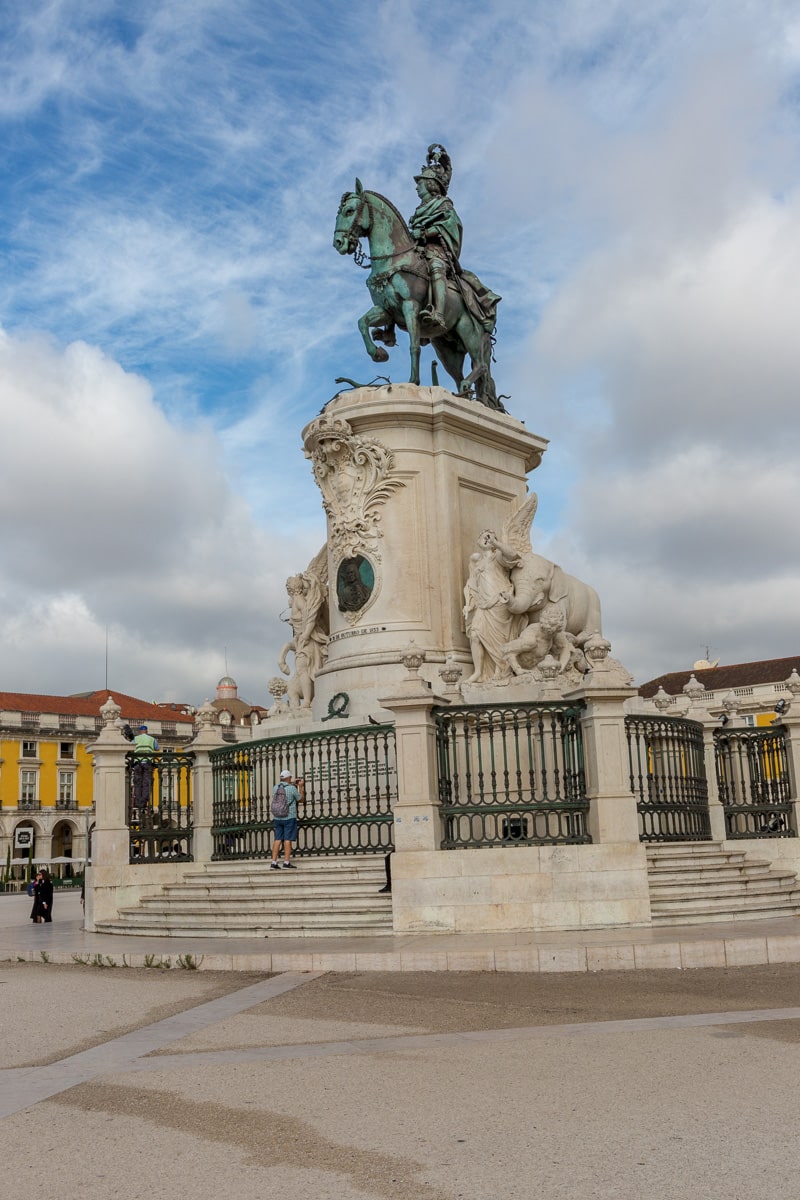 The centerpiece of the Praça is the equestrian statue of King José I, installed in 1775. This bronze statue was the first monumental statue dedicated to a king in Lisbon.  Still, in the 1980s, it was used as a car park.

When we walked this route, we traveled downhill. The incline is slight since we were in the valley between some of Lisbon’s famous seven hills. We traversed this valley several times during our stay, going from our apartment down to the Praça dos Restauradores or Avenida da Liberdade on our way to the hills on the other side.

There were many more streets and alleys to discover and roam, but we would have to wait.