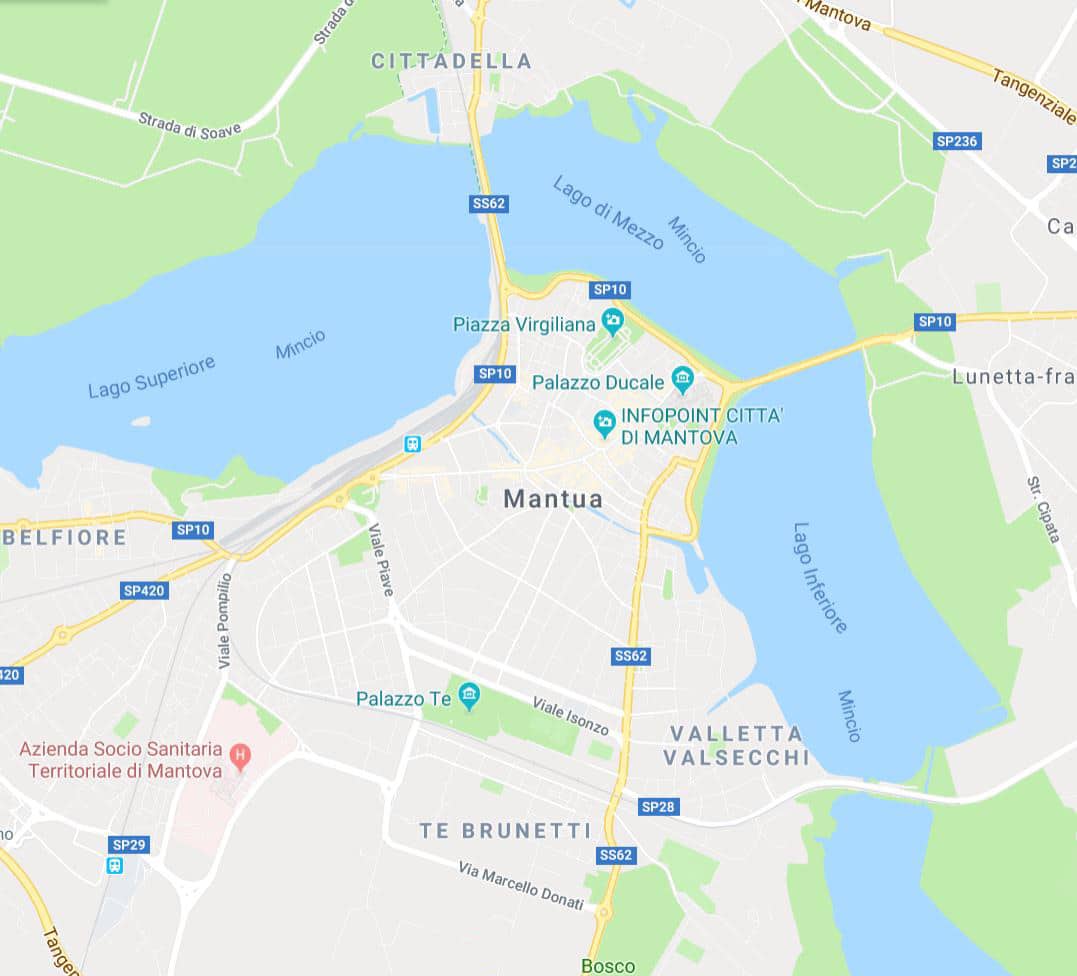 Mantua (It. Mantova) is known to the locals as la Bella Addormentata – the Sleeping Beauty. Almost equidistant between Venice and Milan and a short train ride from Verona, this ancient city is often overlooked by those scurrying between the more popular destinations. The lack of tour buses and their crowds helps contribute to a sense of timelessness that makes leisurely exploration of this old medieval city such an adventure.

During the early 12th century Mantua became a free city and had to defend itself from the influence of the Holy Roman Empire. In 1198, the Mantuans engineered a stretch of the River Mincio into four lakes to prevent ﬂooding and to reinforce the city’s natural protection as a defensive barricade. Three of these lakes still remain today and the fourth one, which ran through the center of town, was reclaimed during the 18th century. 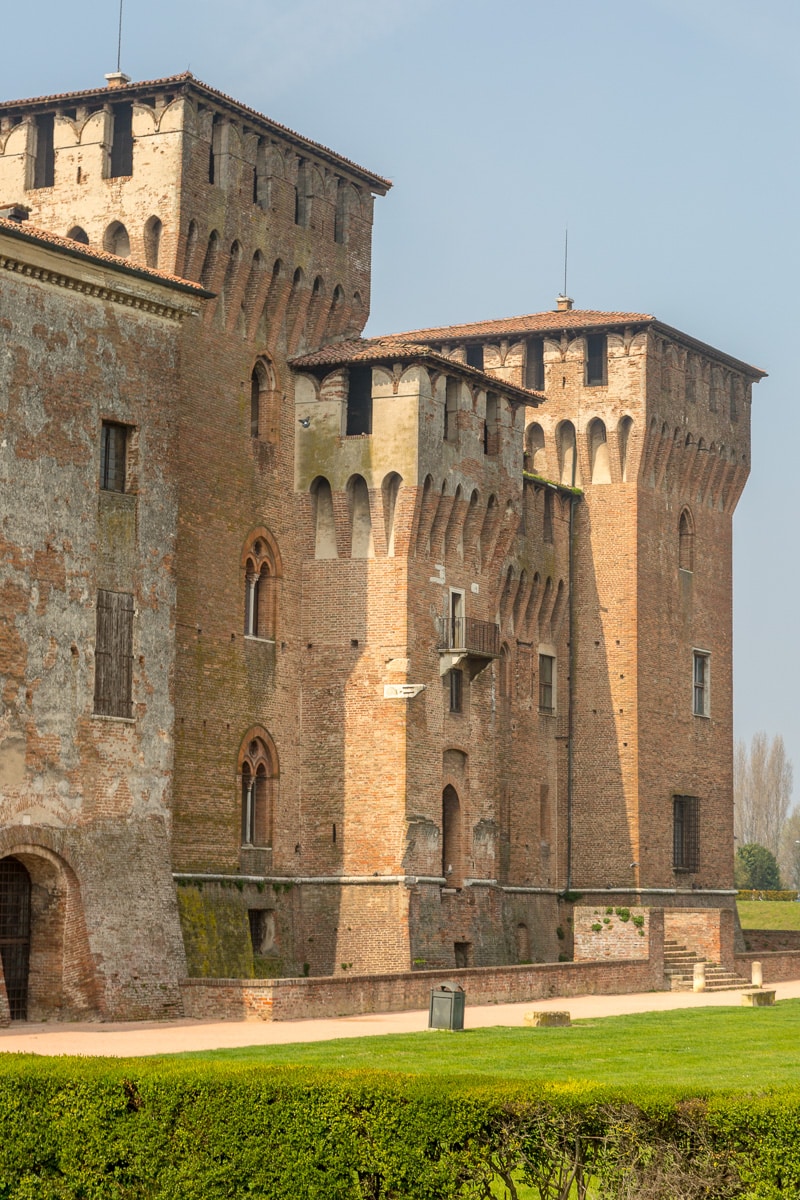 This once powerful city was one of the greatest Renaissance courts in Europe and home of the wealthy Gonzaga family that ruled Mantua for almost four centuries (1328 to 1708). Under the Gonzaga family’s rule Mantua became one of the most influential artistic, cultural, and musical hubs of Northern Italy and the country as a whole.

Many Americans will recognize the name Gonzaga as one of the country’s premiere college basketball programs. The university was named for the young Italian aristocrat who became a Jesuit, Saint Aloysius Gonzaga (1568–1591).

In Mantua, the Gonzagas built new walls and gates and renovated the city in the 14th century. During the Italian Renaissance, the Gonzaga family became less tyrannical, and raised the level of culture and refinement. The city became a significant center of Renaissance art and humanism. 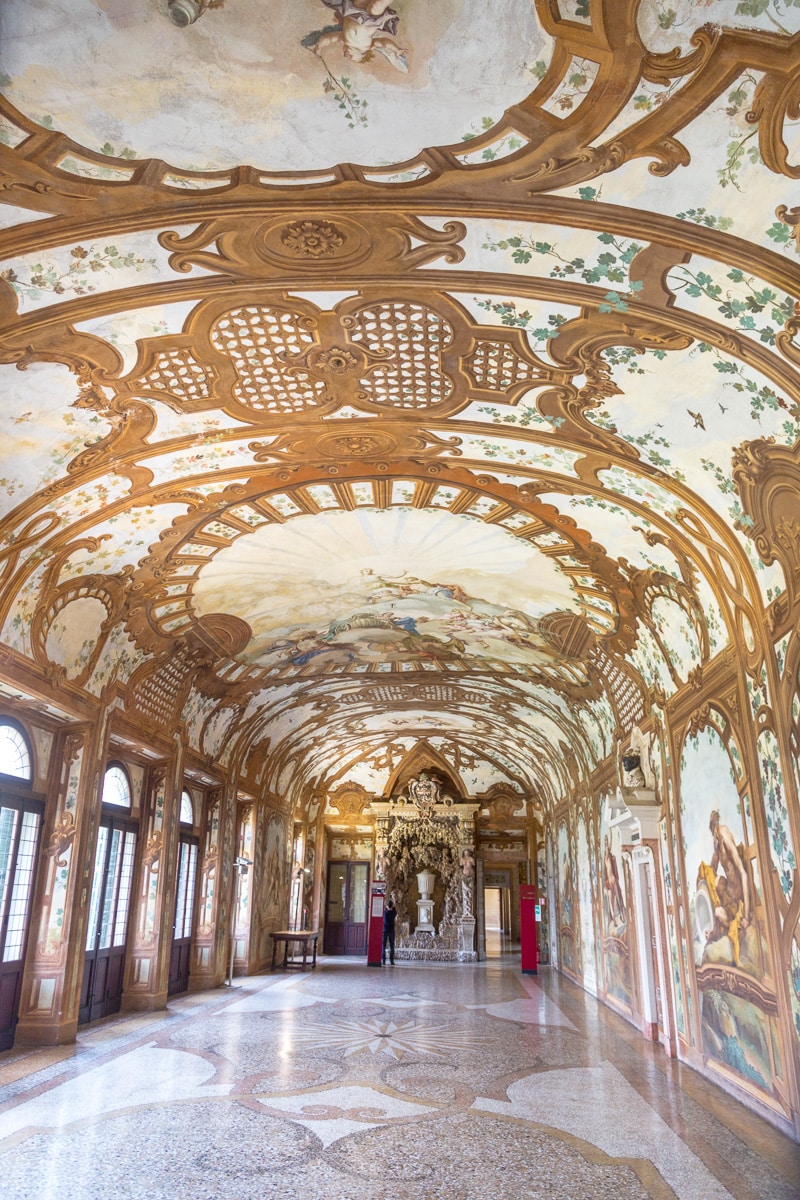 Mantua is noted for its major role in the history of opera, and is also known for its architectural treasures and artifacts, elegant palaces, and the medieval and Renaissance cityscape.

While there, we visited the Palazzo Ducale, the home of the Gonzaga family from the late 13th to the early 17th centuries. It is a huge complex of buildings, courtyards, and gardens, including the Castello di San Giorgio, built between 1395 and 1406. There is a vast amount of incredible art housed in this famous residence of the Gonzaga family, and it is easy to neglect the magnificent structures in which they are housed. 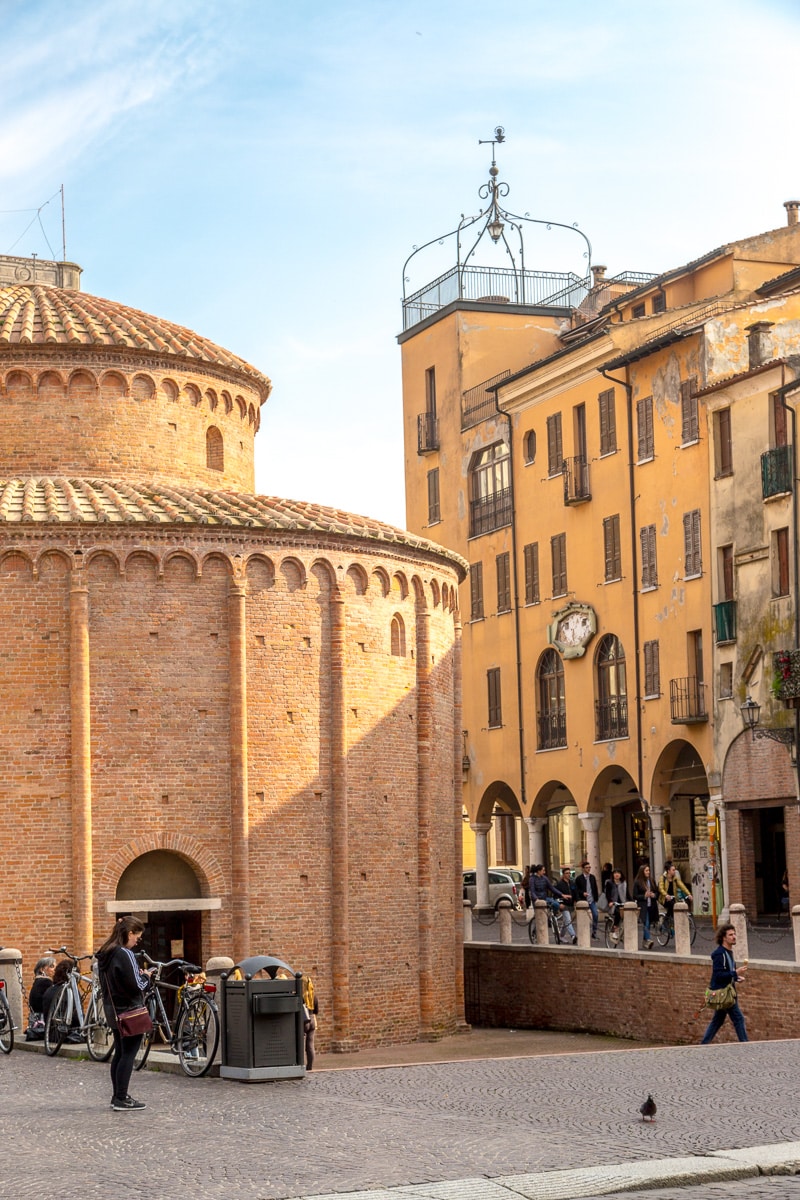 As we strolled through this beautiful city, we admired many centuries-old churches and buildings, some we were able to visit though others were closed for various reasons.

The Rotonda di San Lorenzo – the time-worn 11th-century structure is the most ancient church in the city. The Lombard Romanesque Rotonda lies below the level of the square, and its interior brick walls still show the shadowy remains of 12th- and 13th-century frescoes.

Basilica of Sant’Andrea – Commissioned by Ludovico III Gonzaga, the church was begun in 1472. It is a Roman Catholic co-cathedral and minor basilica and one of the major works of 15th-century Renaissance architecture. 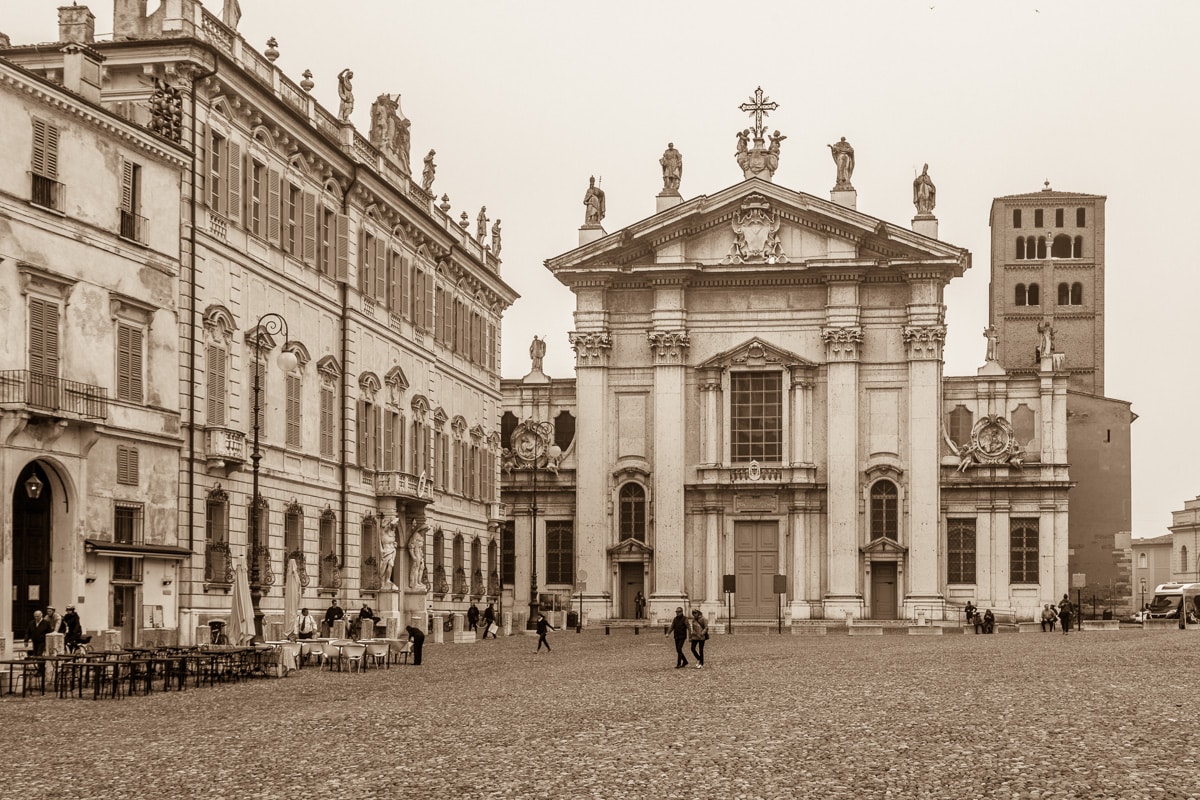 We wandered through a chain of fascinating cobbled piazzas or squares: Piazza Sordello is the most ancient part of Mantua, and corresponds to the city boundaries from Roman age to the late Middle Ages; Piazza Broletto was created around 1190 when the town grew beyond its original historic center. Surrounded mainly by buildings dating back to the period of the city-states; and the Piazza delle Erbe, built in the 12th century, has always been the center of trade and was the location of the town’s vegetable market. Flanked by a number of late Gothic and Renaissance buildings it is Mantua’s most lively piazza. 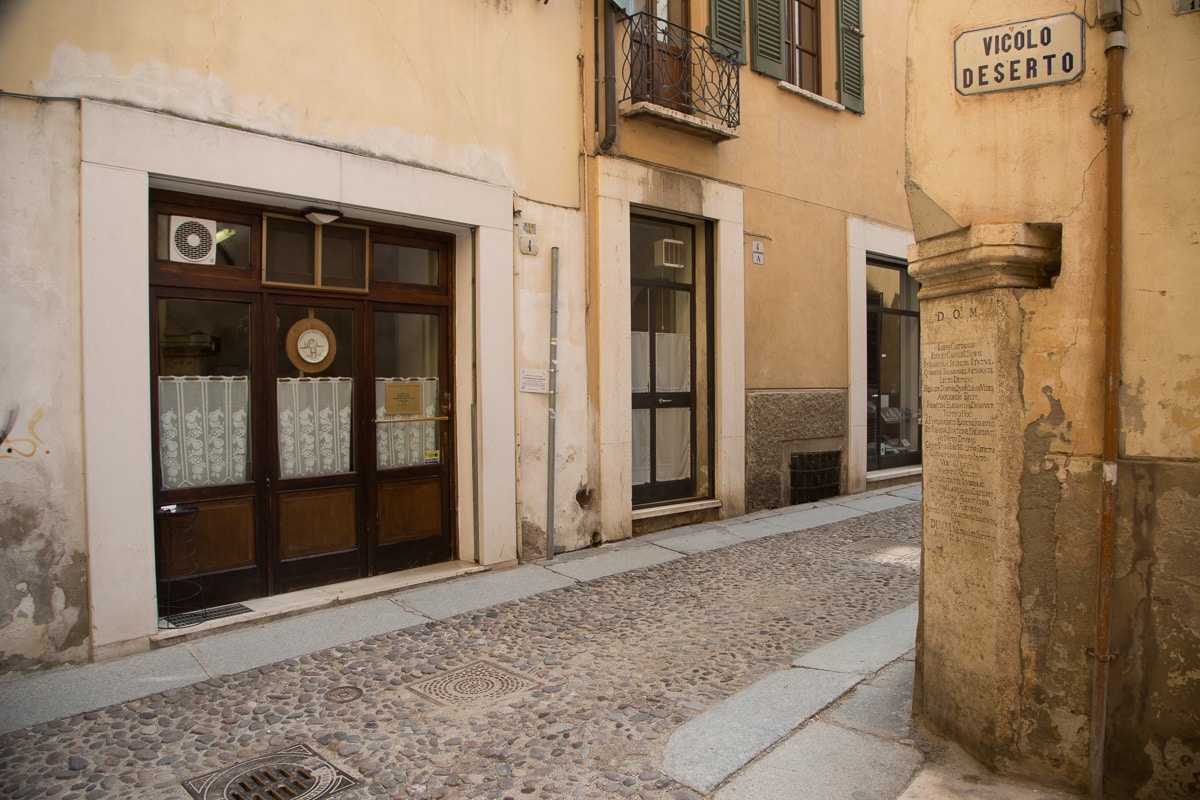 Somewhere during the day’s explorations we decided we needed to eat lunch. Jeannie had read about a good restaurant where all the locals eat. We had an address, but none of the tourist maps showed the little alley where it was located, and the smartphone was playing dumb.

We had begun to look for alternatives when by luck, we wandered in the right direction and found the street name, and then walked right by the restaurant that had hardly any sign. Backtracking, we found the nondescript doorway and went into the Osteria delle Quattro Tette (literally “Restaurant of the Four Tits”).  The place was very busy, but after a short wait, we were shown to a rough-hewn wooden table by some windows beneath unadorned barrel-vaulted ceilings. 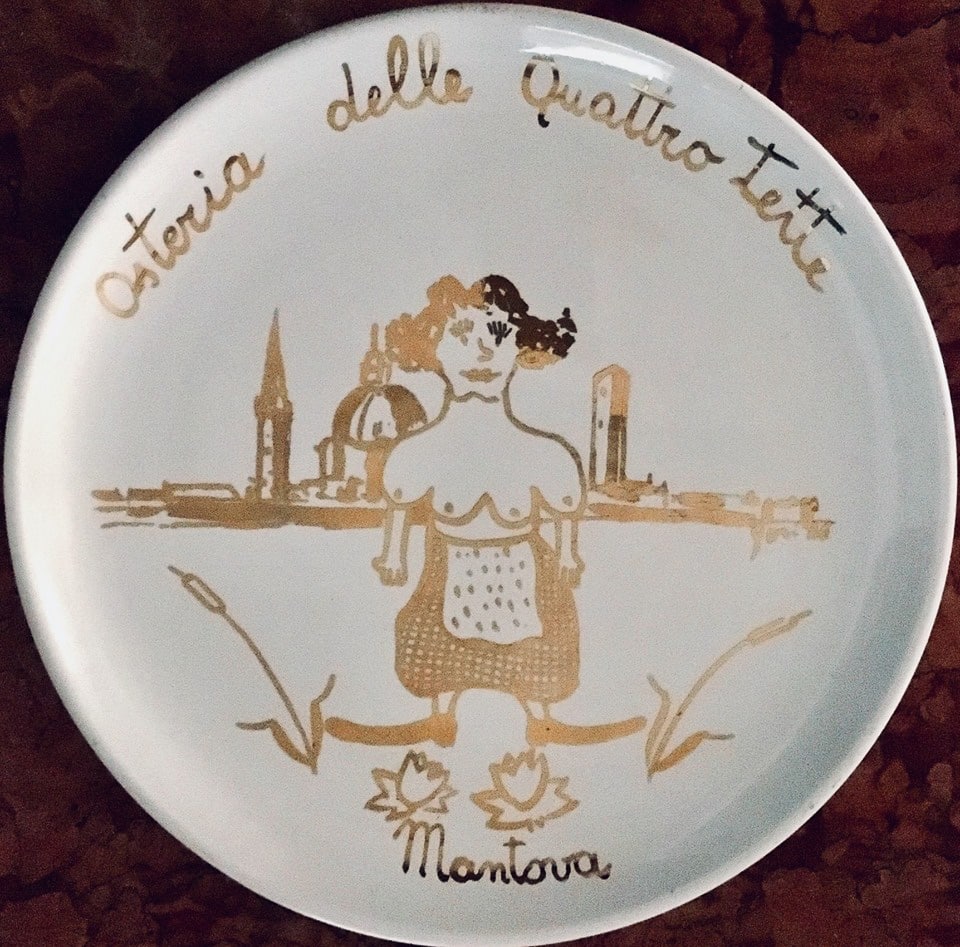 The tables are shared, and we were seated with some local businessmen. As our waitress, who spoke very little English (and we of course, speak less Italian) tried to explain one of the dishes, one of the gentlemen at our table assisted, describing risotto alla pilota (risotto with spiced sausage) as a very local dish. Well, we both ordered it, and it was delicious. And it was nothing like any risotto either of us had ever eaten before.