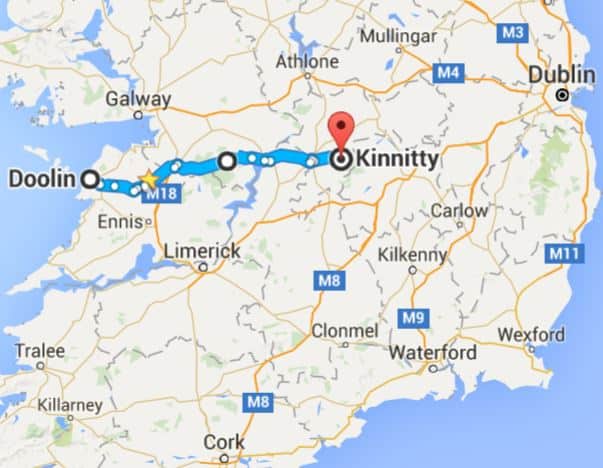 Having spent most of our time in Ireland in close proximity to the sea, we departed the coast for the Irish Midlands, and more specifically the village of Kinnitty (pronounced like Kennedy with t’s) at the foot of the Slieve Bloom Mountains (pronounced  schleeve bloom). We chose Kinnitty because it is located in the very center of Ireland halfway between Galway and Dublin, because of the wealth of walks in the area, and because it was small and off the beaten tourist path. 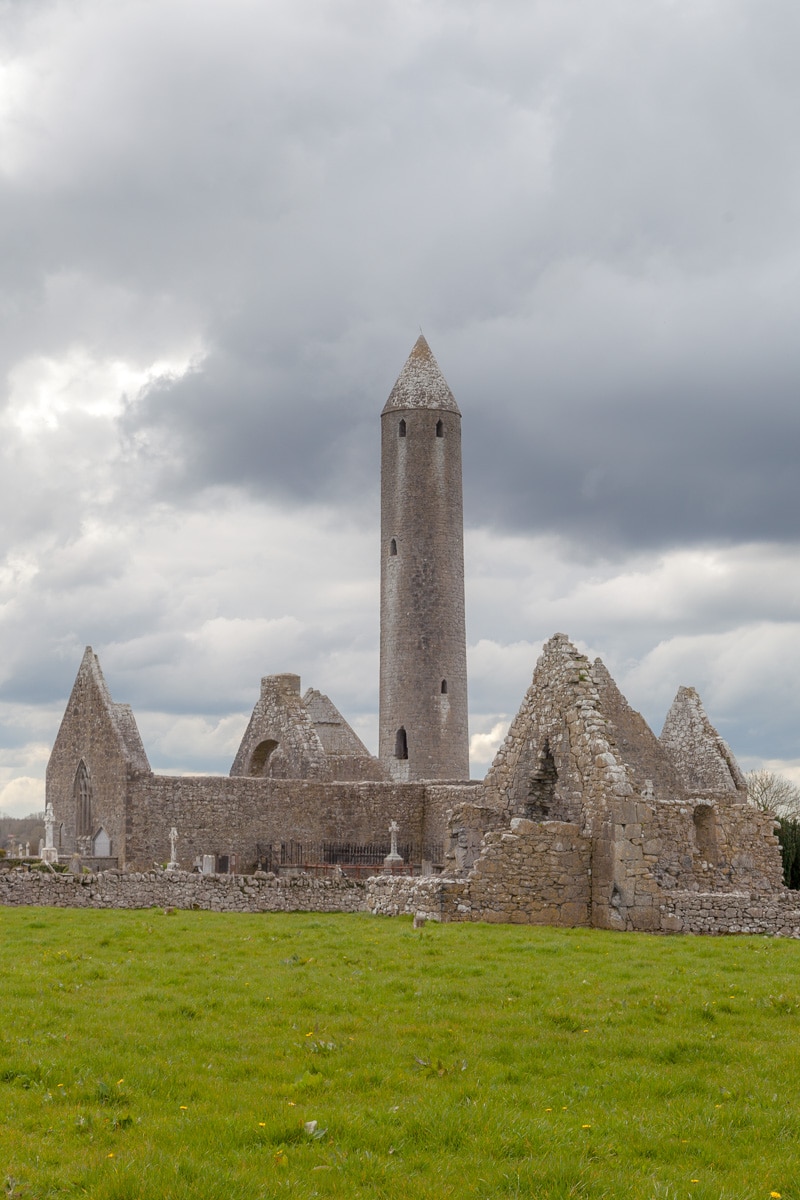 After leaving Doolin, we stopped again at the Burren for a short hike, then further along at the 11th Century ruins of Kilmacduagh Monastery and its 10th Century, 34m | 112ft round tower – the tallest in Ireland. It was lunchtime when we drove into Gort (no relation to the giant robot from the SciFi classic The Day the Earth Stood Still, I don’t think), so we dropped into a small local cafe for a delicious meal.

The remainder of the drive to Kinnitty was through slightly rolling, green farmland and pastures filled with sheep. Many of the trees were still waiting on spring as their leaves were not yet showing.

Before long we could see the low outline of the Slieve Bloom Mountains in the distance, and entering the village of Kinnitty, we had no problem finding the Ardmore Country House. We were warmly greeted at the front door by Christina Byrne, our delightful host, and after stowing our luggage in our charming room, we were treated to tea and biscuits (cookies) in the parlor. 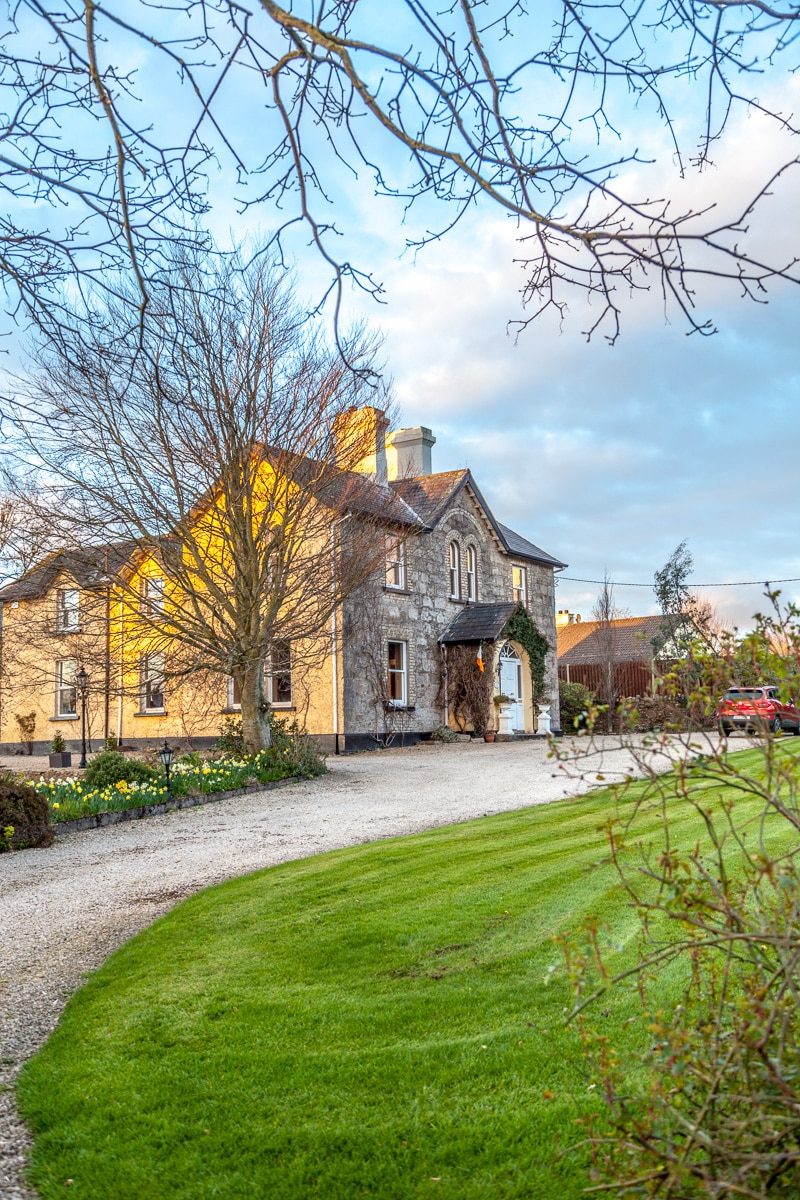 Ardmore House is a large, classic Irish home that has been lovingly renovated, yet maintains a timeless charm.

We arrived on Wednesday, which is when Christina, being an accomplished fiddle player in her own right, joins in the regular trad session at a local pub not far down the road. She invited us and two others from the B&B to Breretons Bar where she would be joining the session, and offered to drive.

It was a good thing that she drove us to Breretons as it was quite a ways down a long, dark, winding, narrow country road. We arrived at the building at an Irish country crossroads illuminated by a single street light, and there was no indication that we had reached our destination. There were few lights, no flashing neon signs and only a few cars lined up across from the pub.

As we walked out of the dark cold and into the pub, the warm glow and sounds of conversations welcomed us in. From that point on, Christina and the other musicians prepared for the evening’s music as other locals came in. The place was getting quite crowded when the first tunes were played, and by the time the session was in high-gear, there were almost a dozen musicians.

Several of the performers were members of the same family. I had the pleasure of chatting with the father of three players who are award-winning musicians as are their children. Other significant musicians were Pauric James (accordians), David Kinsella (Uilleann pipes), Richard Kennedy (mandola – a large tenor or bass mandolin), Martin McHugh (Bodhran), Denis Ryan (fiddle), and of course Christina also on fiddle. Along the way another player or two dropped in, and during the session various members of the audience sang an acapella tune.

Half-way through the evening, which began after 21:30, the pub owners brought out plates of sandwiches, first to the musicians, then to all the others there. Everyone chatted away with each other, and as we stuck out like sore thumbs, we were included in some of the banter before the music resumed. It was a delightful evening that ended very late, but far too soon. 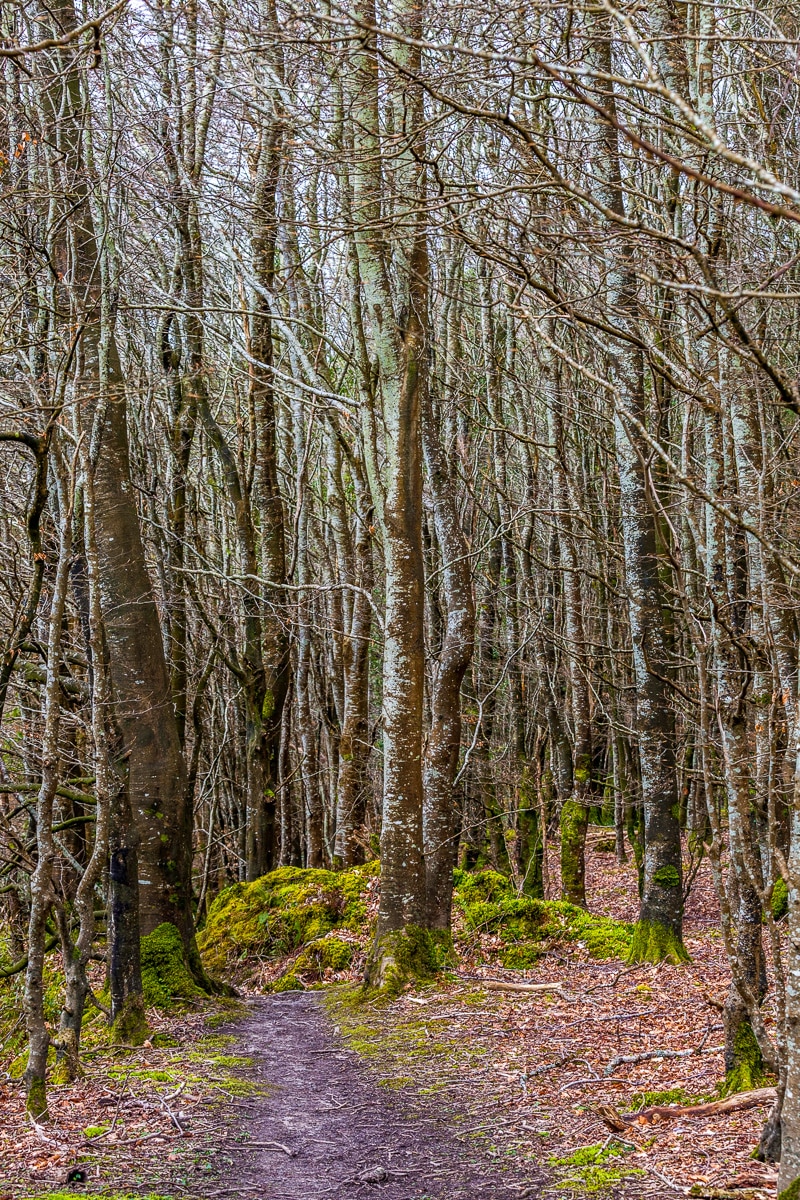 The next day we did two hikes, the first departing from behind Kinnitty Castle, now a rather grand hotel with a history that dates back to 1209. Having been built and destroyed several times over the centuries, it was last rebuilt in 1928, and remodeled as a luxury hotel after 1994.

The route took us over mountains and moors, through woods and along streams for over five miles. After a brief picnic stop, we returned to our B&B to recharge before our second hike of the day.

We then drove three miles from Kinnitty to the village of Cadamstown where the Silver River Nature Trail starts. It is a very interesting nature reserve both geologically and botanically. 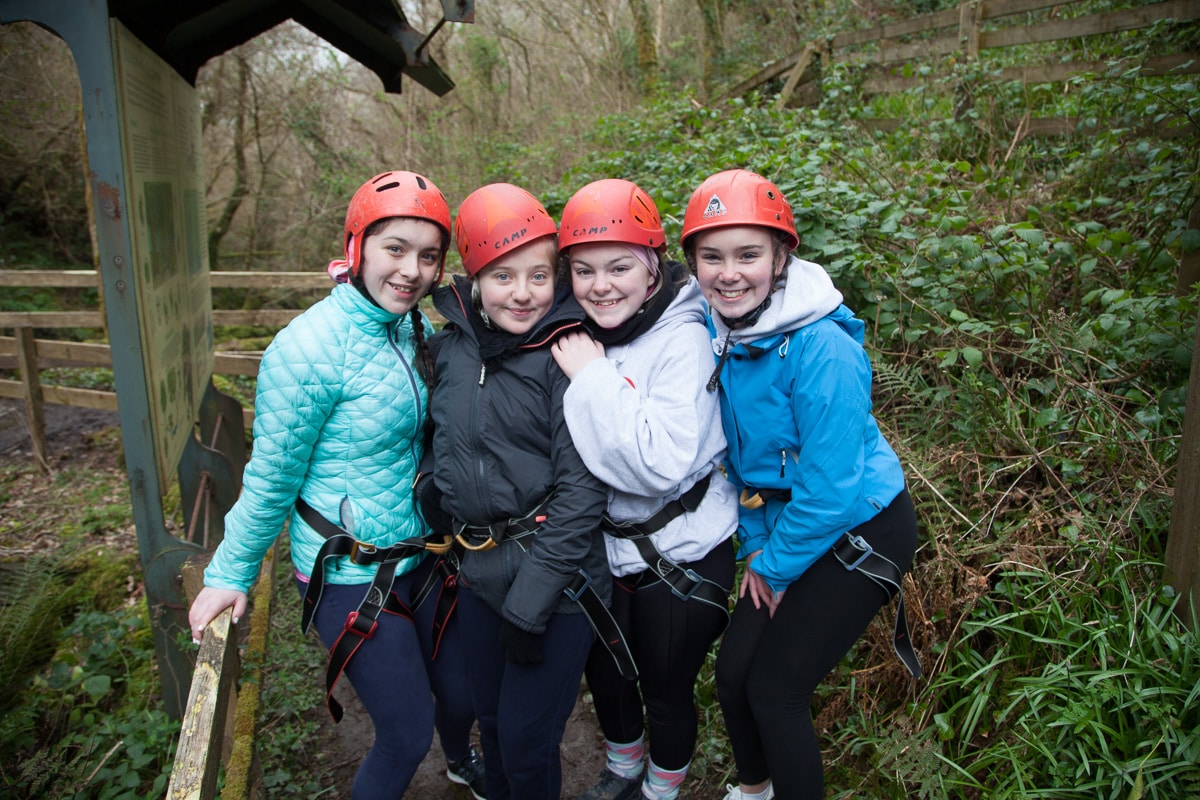 The area is relatively untouched, and visited mostly by students of geology and botany who come to see the rock formations and rich variety of plant life. We were fortunate to see groups of young students wading in the river and rock climbing on some of the ancient rock faces. Once we left the area where the students were, we were immersed in nature with only the sounds of the birds, wind and the babble of flowing water. 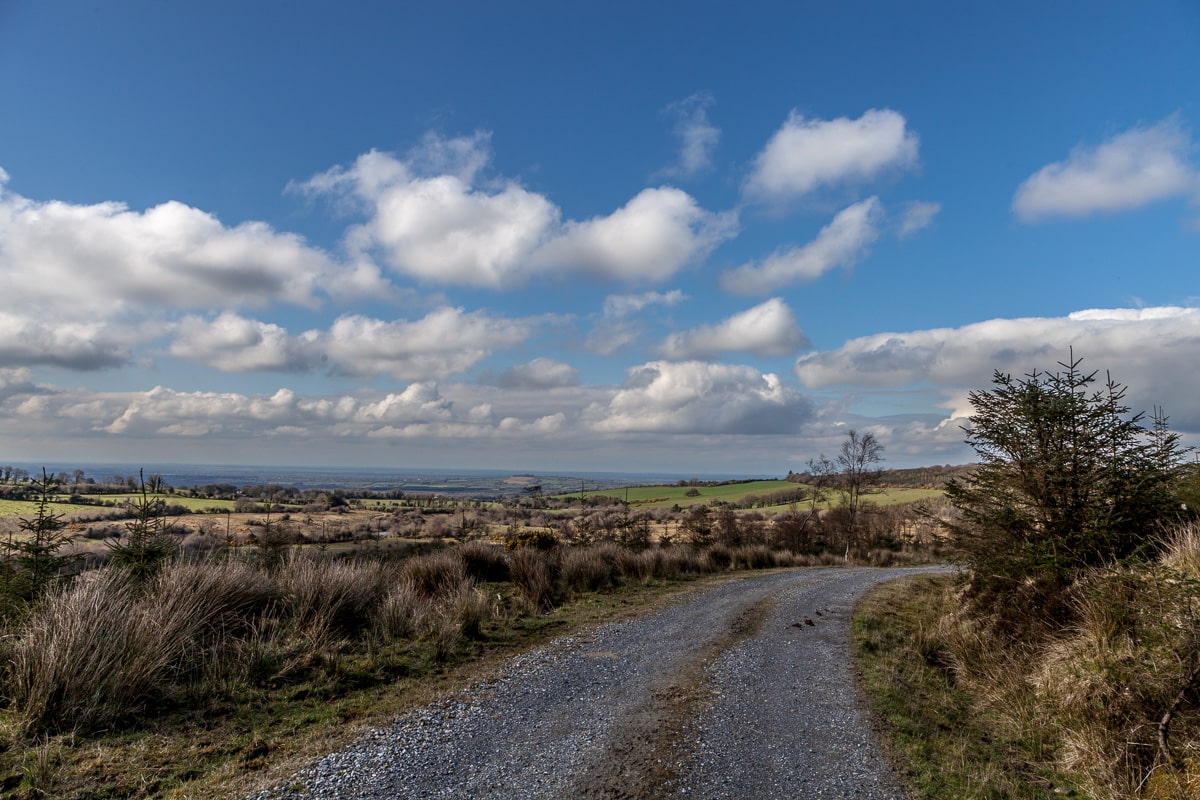 This hike also took us through a wide variety of terrain and after another 5-6 miles, we were quite exhausted and hungry. So after cleaning up at the B&B, we returned to Kinnitty Castle for a well-deserved meal and a pint of Guinness, followed by a return to Ardmore Country House for a good night’s sleep.

Arising not long after the sun, we had another great breakfast prepared by Christina, and we organized for the days outing, Lough Boora Parklands and Clonmacnoise, an ancient monastery complex. 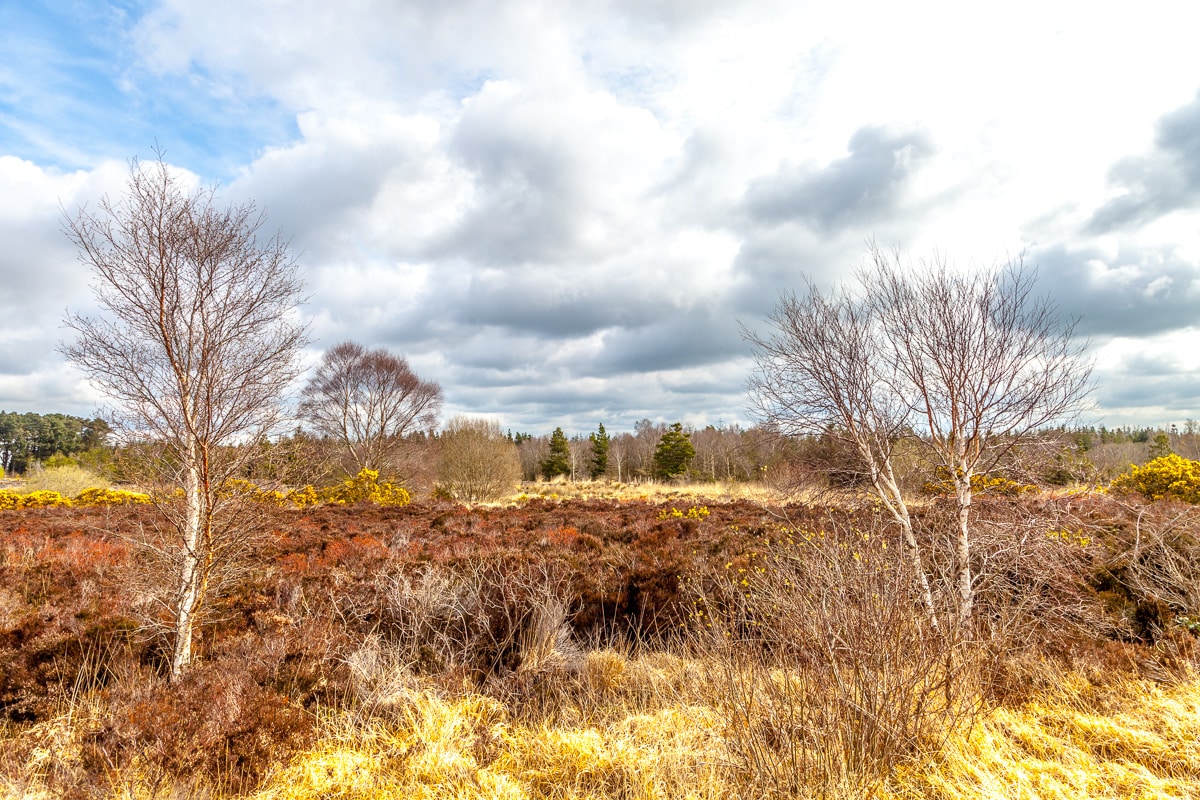 Lough Boora Parklands is a beautiful natural and historical resource nestled in the heart of the boglands of County Offaly. Peat was harvested here for fuel between the 1950s and 1970s, and the land is now being reclaimed for agricultural and eco-tourism use.

Stopping by the Welcome Center, we had a delightful conversation with two of the staff who made recommendations not only for walks around the park but for a lunch recommendation further along. 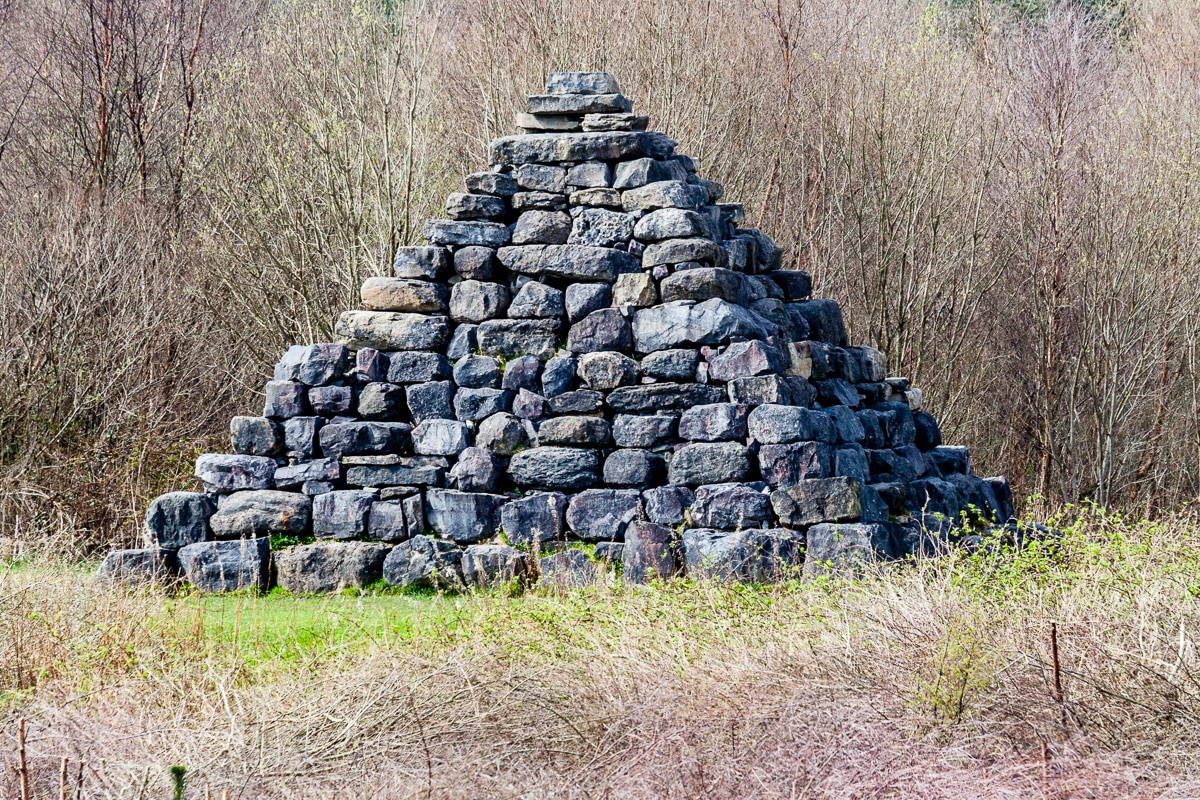 Our first walk took us through working farms and natural areas that were filled with all sorts of creatures from cows, horses, and sheep to deer and hares, and birds singing all around.

With several routes available for walking, it was a pleasure to also stroll along the sculpture trail that fused art with the boglands. Each sculptural piece included an artist’s statement that related their inspiration taken from the land and landscape. 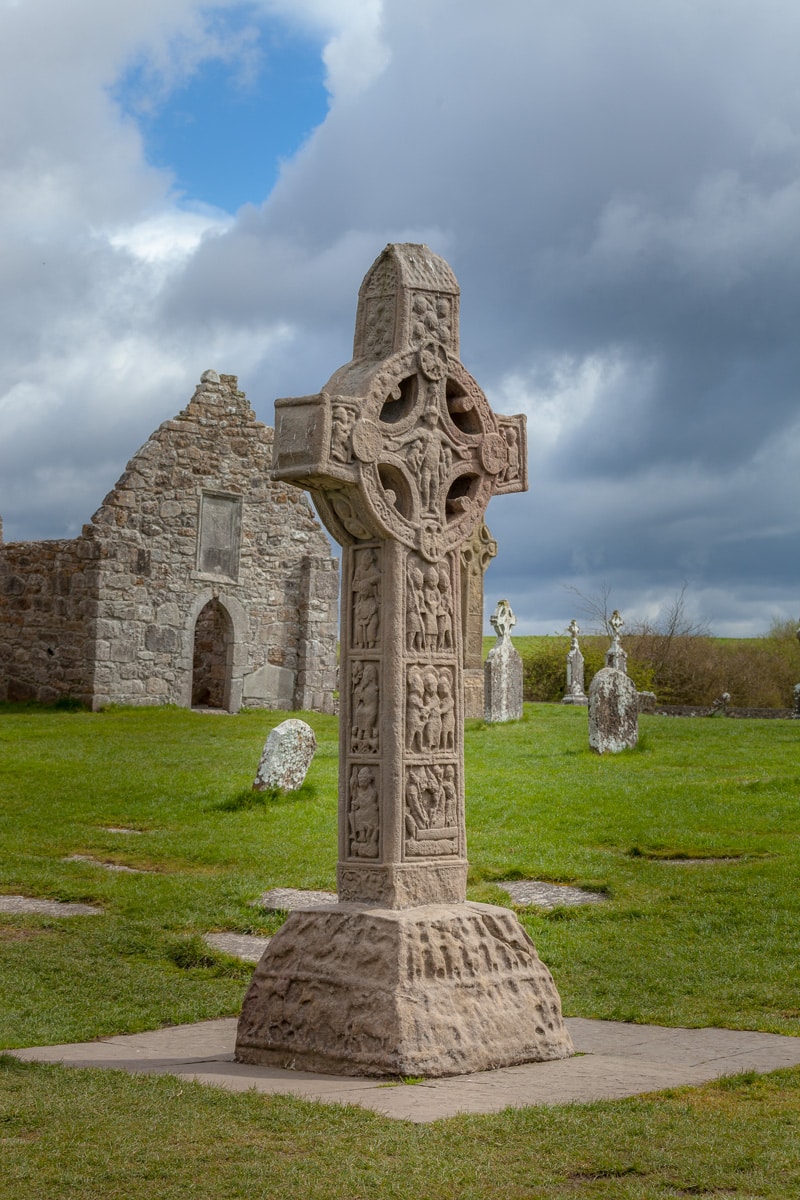 After lunch we drove to Clonmacnoise an ancient monastic site, on the River Shannon. Founded in 544 by St. Ciarán, there are extensive remains of a cathedral, round tower, high crosses and no fewer than seven churches on the site. Clonmacnoise was once a leading center of religion and learning in Europe, and Pope John Paul II evidently thought enough of it that he included it in his visit to Ireland in 1979.

When we first arrived the place was quite crowded, but when a brief rainstorm arose, we ducked into the interpretive center and watched a short historical film. When we came out not only were the rains gone, but so were the crowds. We then had some peaceful time to roam among the ruins before returning to Kinnitty. 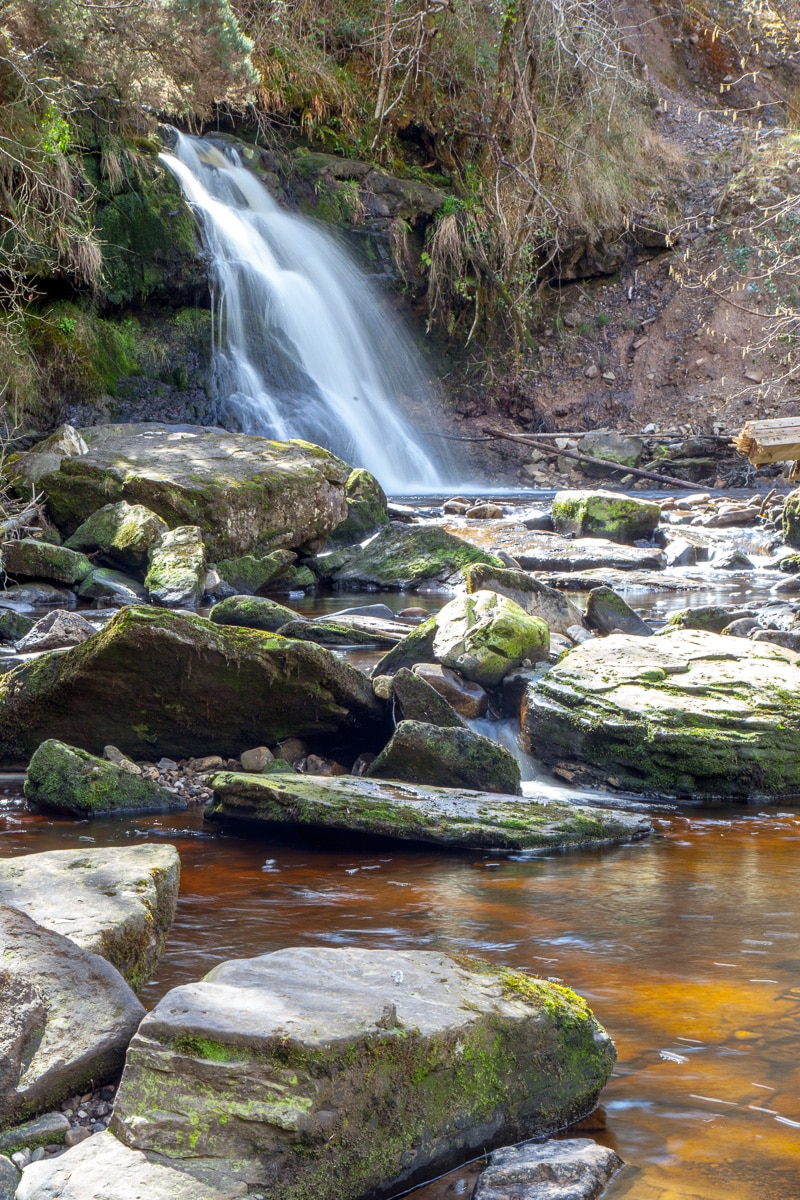 The following day, we wanted to see a bit more of the Slieve Bloom mountains so we opted for a drive to a short hike to see Glenbarrow Falls, then we drove over the top of the mountains through “The Cut”. This part of the road was hewn by hand through the rock and bogs on the mountain road between Mountrath and Clonaslee.

Though a rather easy day, we still managed to get in more than seven walking miles, and after another delicious meal at the Castle, we needed a sound night’s sleep for tomorrow’s journey back to Dublin and then to England.