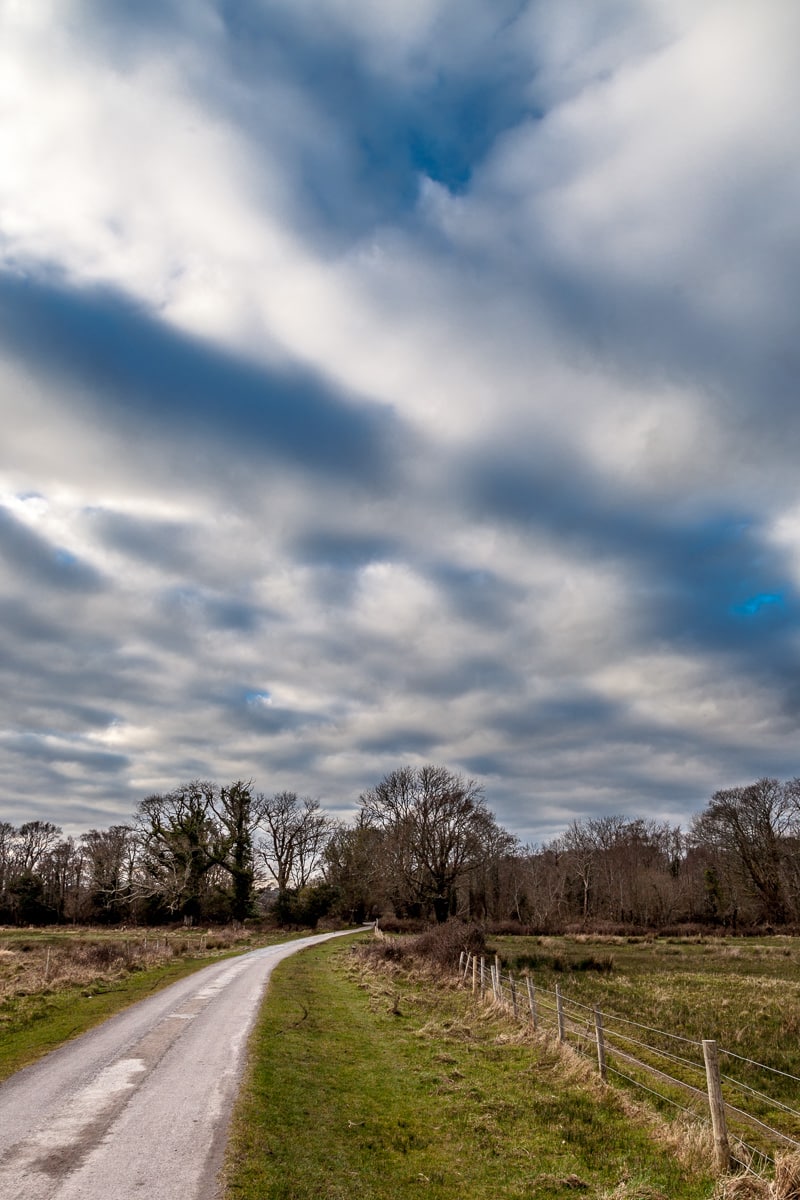 Yes, I caught a mild cold. But the symptoms were under control, and I felt reasonably well enough to get out. At least well enough for walks into town through the National Park for groceries.

The Killarney National Park is accessible just across Ross Road from our apartment. Several paths diverge from the main path and can take you to Ross Castle, on pleasant walks along the River Deenagh, or on longer hikes into the forests and along the lakes.

The signs of spring are everywhere, singing birds flit through the bare branches of the trees whose buds are waiting on their mysterious signal to burst forth into an eruption of green. The bogs and moors are wet and squishy, and the new growth of some as yet flowering plants are sending their green leaves up through the shallow water and mud to raise their flowers skyward. 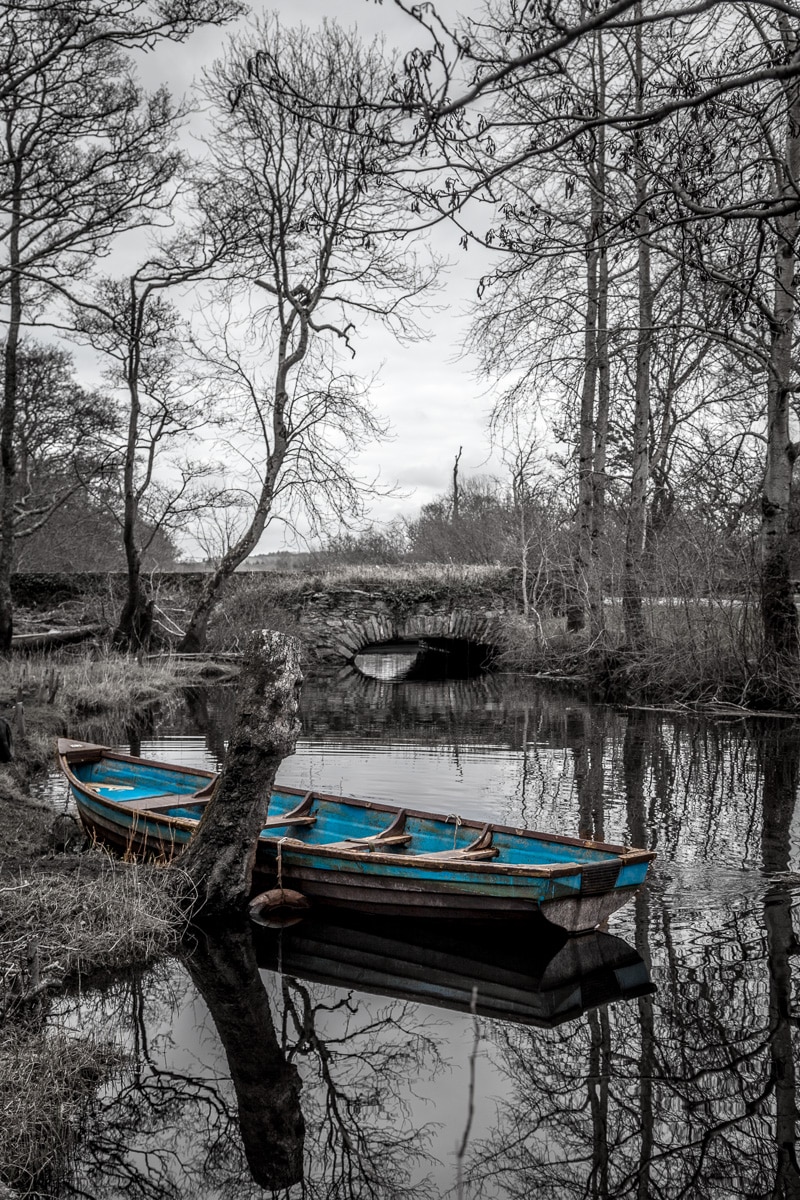 The sky has been mostly gray and overcast with an occasional bright spell, while rains have been light and scattered. We always wear our rain gear just in case of a shower, but also since it is an integral part of our protection from the cold and wind.

The weather has been rather cold while we have been here. Highs have been in the 5-10° C (40’s F) so we have bundled against the temperatures and wet. Layers are essential, and there are many.

One of the first walks was to Ross Castle which was built in the late 1400’s, and is a typical example of the stronghold of an Irish Chieftain during the middle ages. Its dramatic and strategic location on the shore of Lough Leane was best demonstrated during the Irish Confederate Wars in 1652. British General Ludlow, with 200 horses and 4,000 soldiers marched to Ross but was unable to take the castle from land, but rather by artillery from boats on the lough. The castle was recorded as being one of the last to surrender. 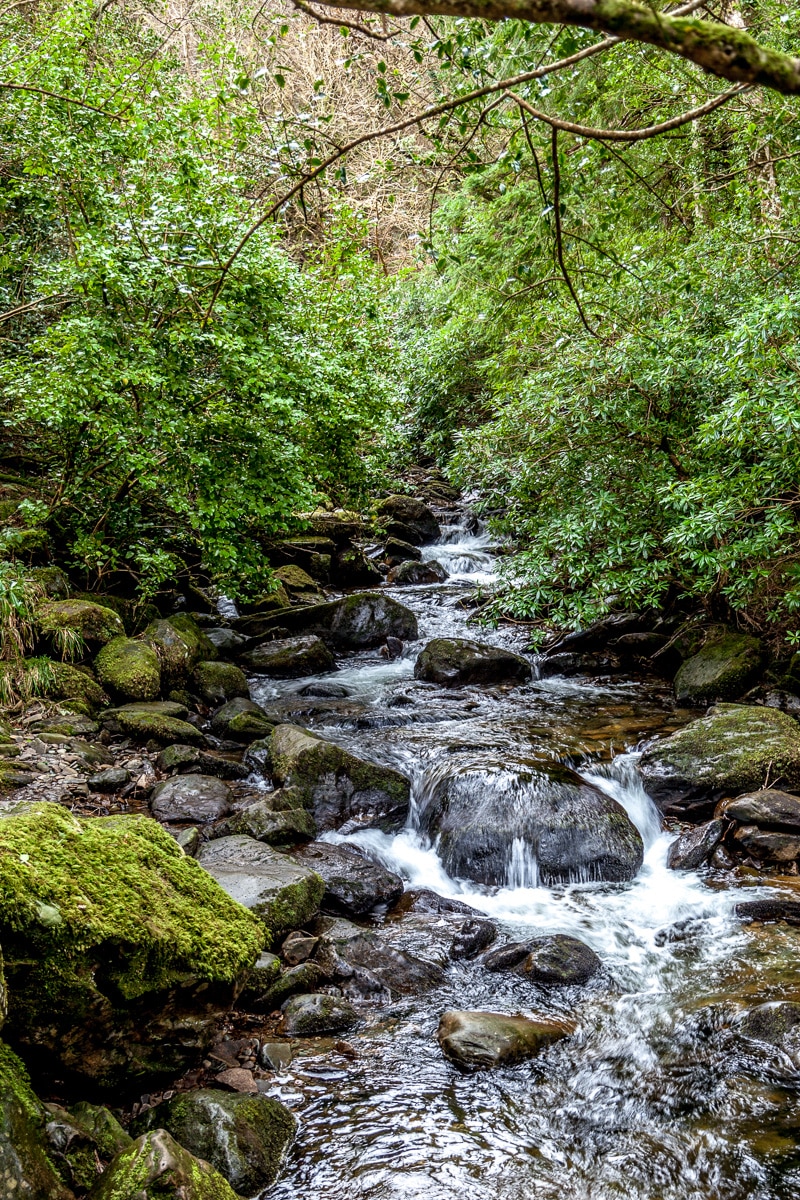 The next day we planned a long hike departing from Torc Waterfall, about a 10-15 min drive from the apartment. A number of trails of varying lengths depart from the falls, with many options.

The day was, again, cold and drizzling, but we were prepared. As we walked up the path up toward the falls, the rain began to come down a little heavier. I was able to make several images of the cascades before having to protect the equipment. Yet we weren’t going to turn back. 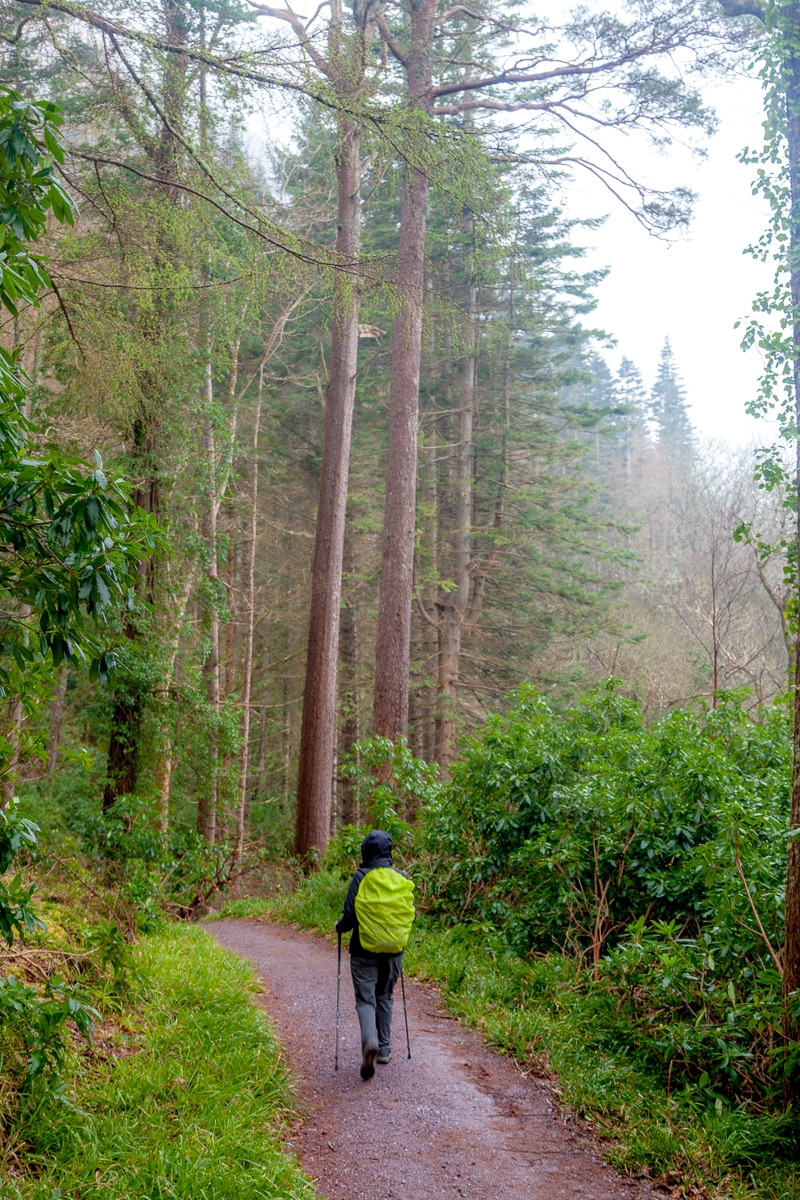 The rain changed to a light mist as we ascended the steep stone steps toward the upper reaches of the trail. Green moss and lichens covered everything from rocks to tree limbs. Occasional views of the lakes in the distance gave us an indication of how high we had climbed before descending back down to the lake shore some distance from where we had started. After a brief picnic, we followed another path along the lake towards Muckross House a grand Victorian mansion and one of Ireland’s leading stately homes.

We decided that we might return another day for a tour of the manor house, but did avail ourselves of the cafe where we had tea and scones to invigorate ourselves for the return to our car, a fair distance away. 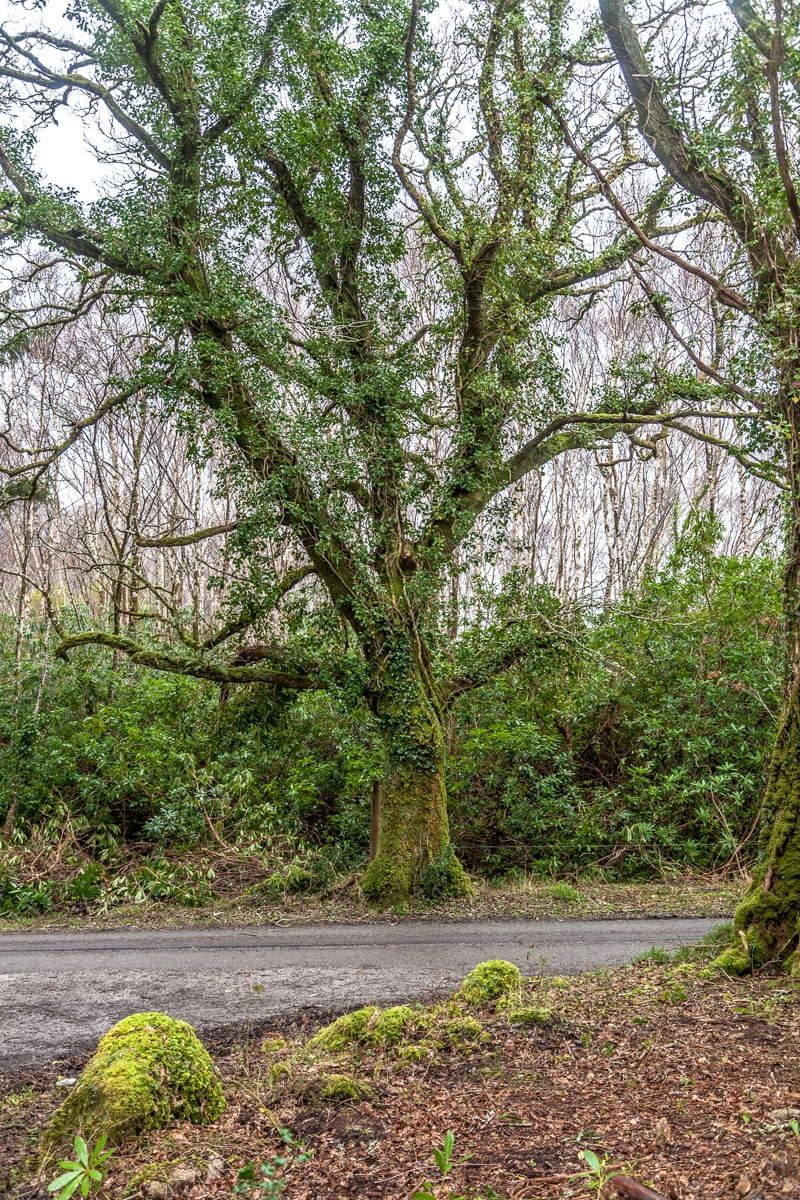 The walk back was delightful as the rain had stopped and the sky was less dark, even though the wind had picked up. It felt good to sit in the protection of the car for short drive back to our apartment.

After shedding our outer wear and settling in, Jeannie began preparation of a roast we purchased the previous day. Carrots, onions, parsnips, etc. all joined the “Housekeepers Cut” pot roast in the oven for a long cook.

The side effects of a pot roast in the oven is that it helps warm the entire house, and fills the air with the aroma of good food. And of course the main effect is the delicious meal it provided and the leftovers we would enjoy over the next days. 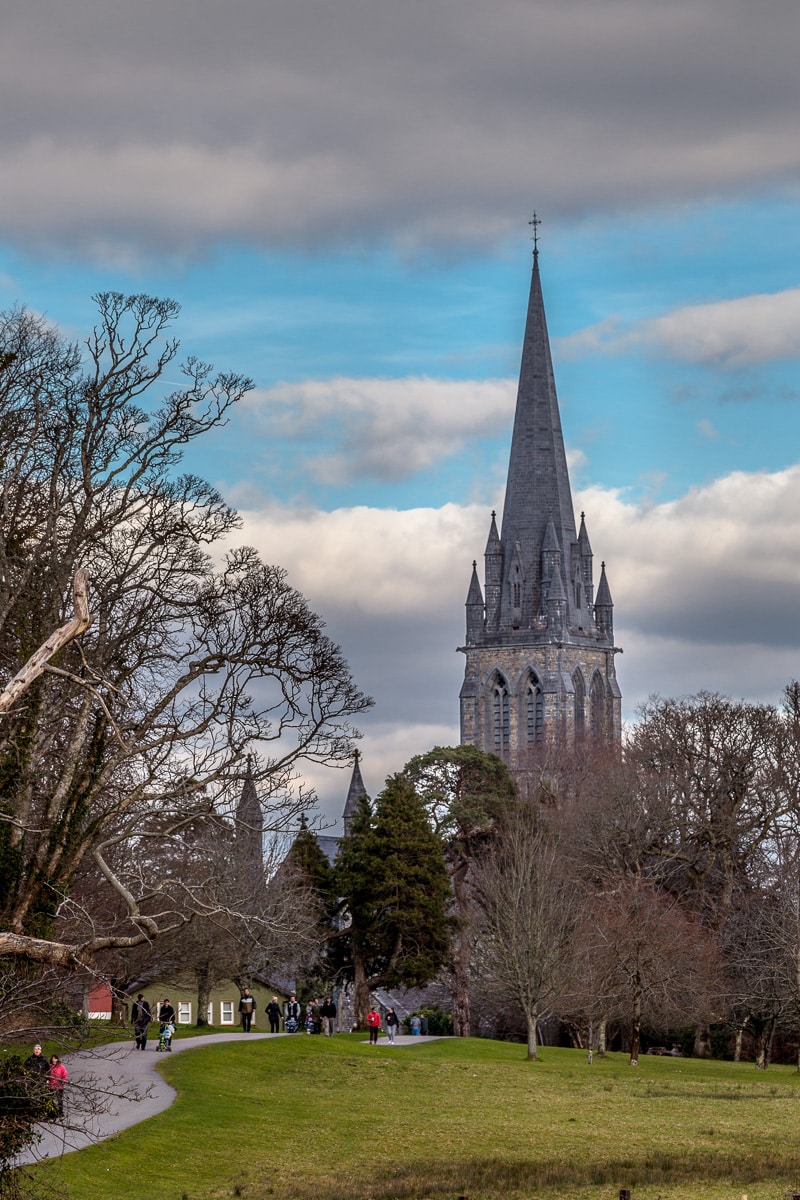 Over the next several days we stayed close to home as the weather had turned a little colder and grayer. There were various walks to and from town to explore, shop, or for meals. We have still averaged over five miles a day, our goal.

On one particularly cold day we decided to go off looking for some of Ireland’s many prehistoric standing stones, wedge tombs and other Stone Age sites. Though there are many, most are poorly described and difficult to locate. 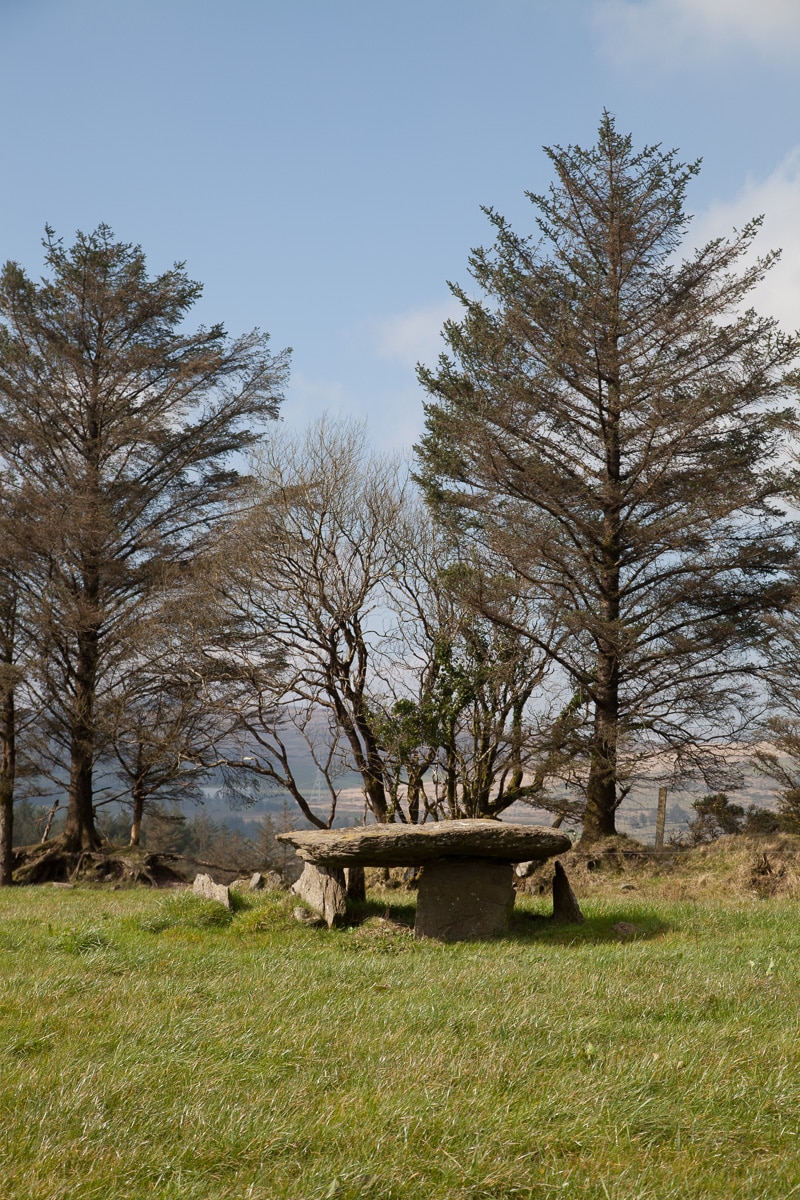 We were able to find several, after several wrong turns and drive-by’s. On the R582 between Millstreet and Macroom, near Carriganimmy we came across an elegant five-stone circle with a long, low axis, and nearby the remains of an alignment, with two quartz standing stones 1m (3 ft} high and a third prostrate not too far away on the same axis. In the same field were the remains of a large radial cairn, over 8 m (26 ft) in diameter: a low pile of stones with most of the radially set stones still in place 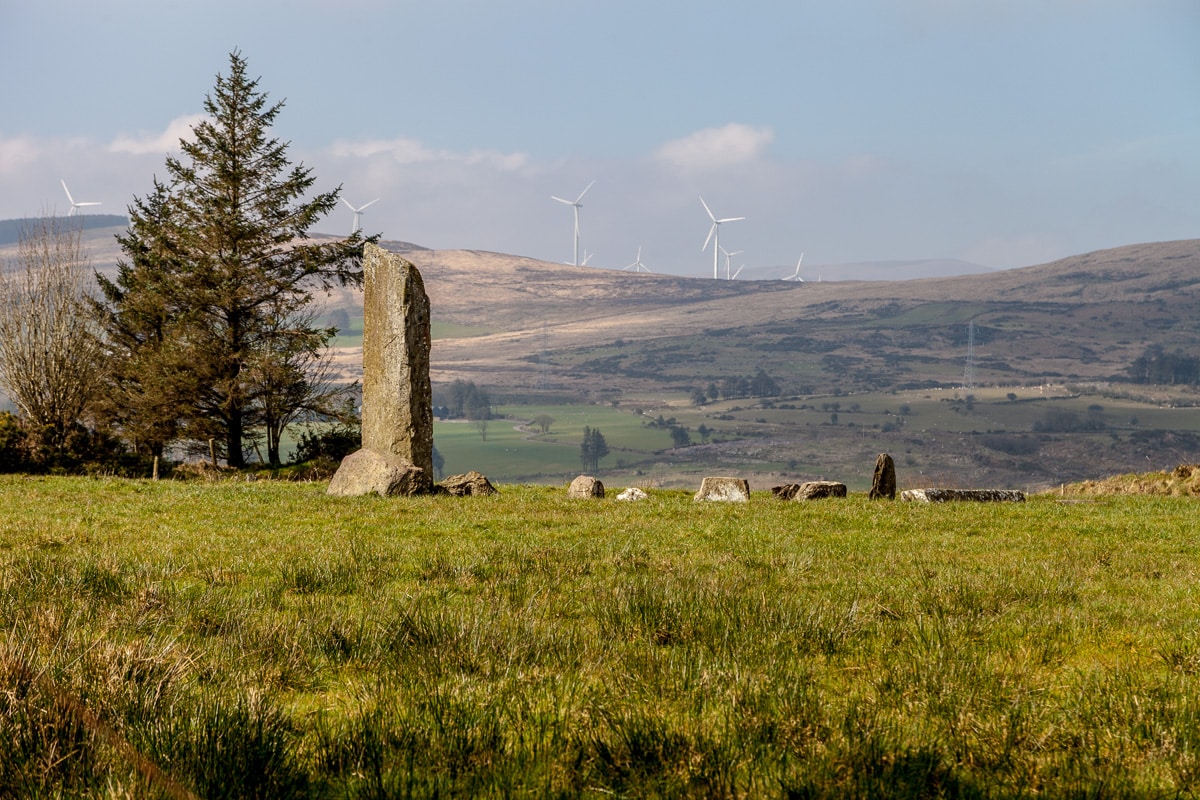 Further down a couple of side roads, in a little valley overlooking a small river was a megalithic complex called Glantane East. It consists of a stone circle of low stones with one large stone over 3m (10 ft) high and another equally large stone now toppled. In a nearby field we found the remains of a wedge-tomb. The fields were quite wet and we had to circumvent broad, wet, muddy areas and many cowpats.

Fascinating as these places are, little is known of their makers or their purposes. Yet one cannot help but imagine such sites being valued as portals into another world, whatever afterlife they believed in; or perhaps astronomical tools to aid in planting crops or other important rituals. In any case their shrouds of mystery may never be lifted yet merely being in their presence provides a tangible connection to ancestors from long, long ago. 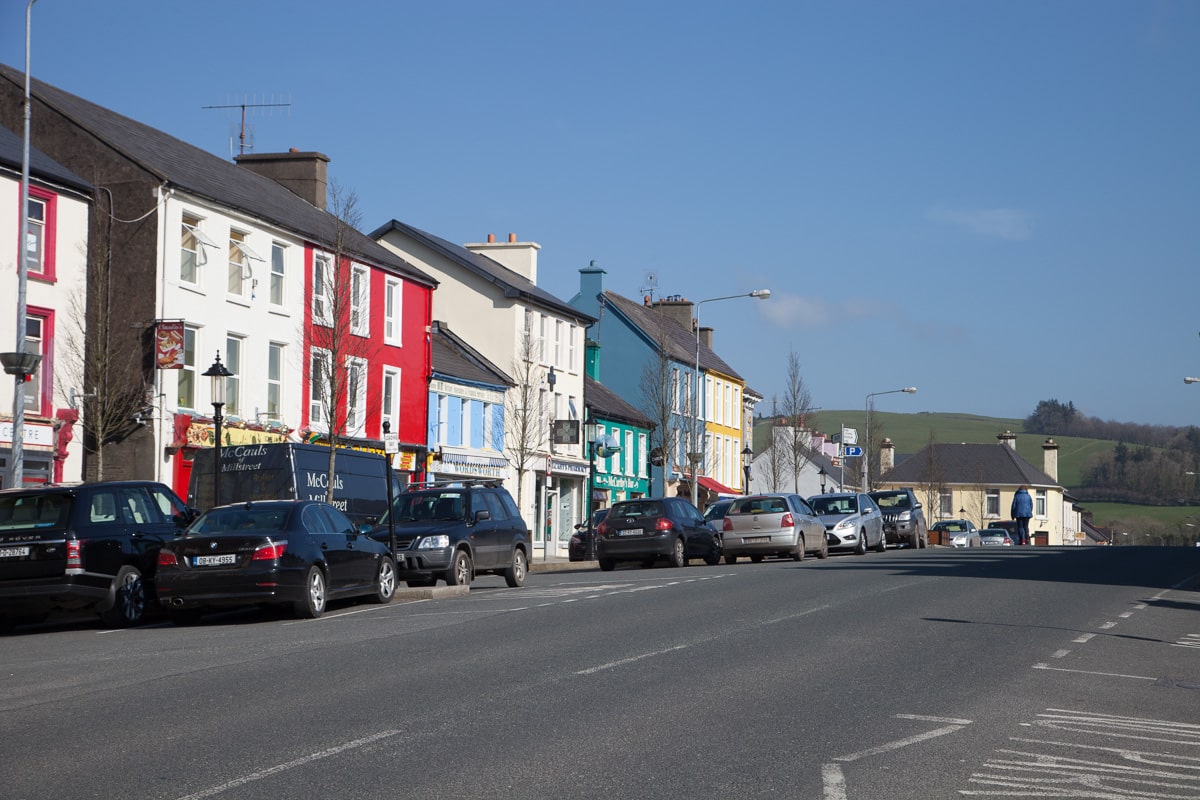 We returned to the present by way of the town of Millstreet where we had hoped to find another stone ring, only to discover that the county park where it was located was closed until later in the Spring. So we had to settle for some hot tea and apple pastry at a cafe in the little town.

The next day we attended a performance of a trio of local musicians at a small cafe where we had eaten breakfast shortly after we arrived in Killarney. Arriving at the appropriate time Sunday afternoon, we were able to find seats at one of the eight or ten small tables in the place. The musicians were excellent. The trio – a guitarist, flautist, and an accordionist – performed a delightful selection of acoustic Irish and world music.

Tomorrow would begin a busy couple of days, as we would take off on a two-day tour of the Ring of Kerry. But more about that later.