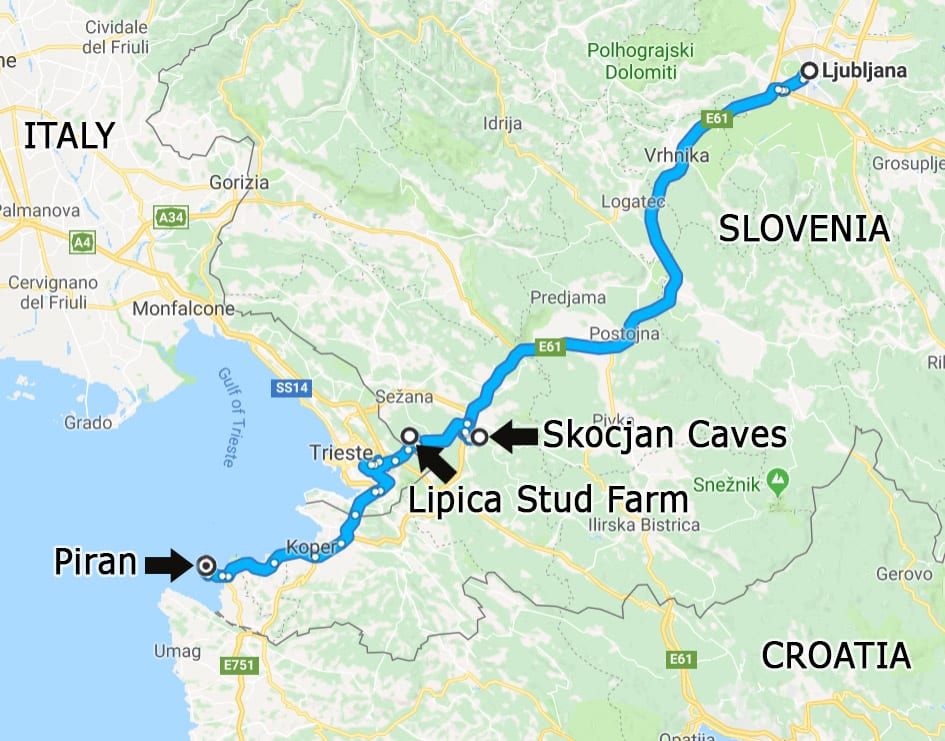 Though Slovenia is a small country, it isn’t lacking in interesting things to see or places to visit.

We had been wandering all around Ljubljana, the capitol, for several days, but felt it was time to go farther afield. The problem was that most places we might want to visit were essentially inaccessible by public transport, and we didn’t have an automobile.

In her research, Jeannie came across Roundabout Travel tours, a local, small-group (8-people max) tour company whose Karst and Coast Mystery tour would visit three of major sights of the Primorska region: the Škocjan Caves, the Lipica Stud Farm (the “c” in Lipica is pronounced as a “z” and in Italian: Lipizza) Stud Farm and the coastal town of Piran. It sounded perfect, so we signed up.

The morning of our tour, we walked to tourist information center where we were the last passengers to be picked up, and after introductions all around, we were on our way. 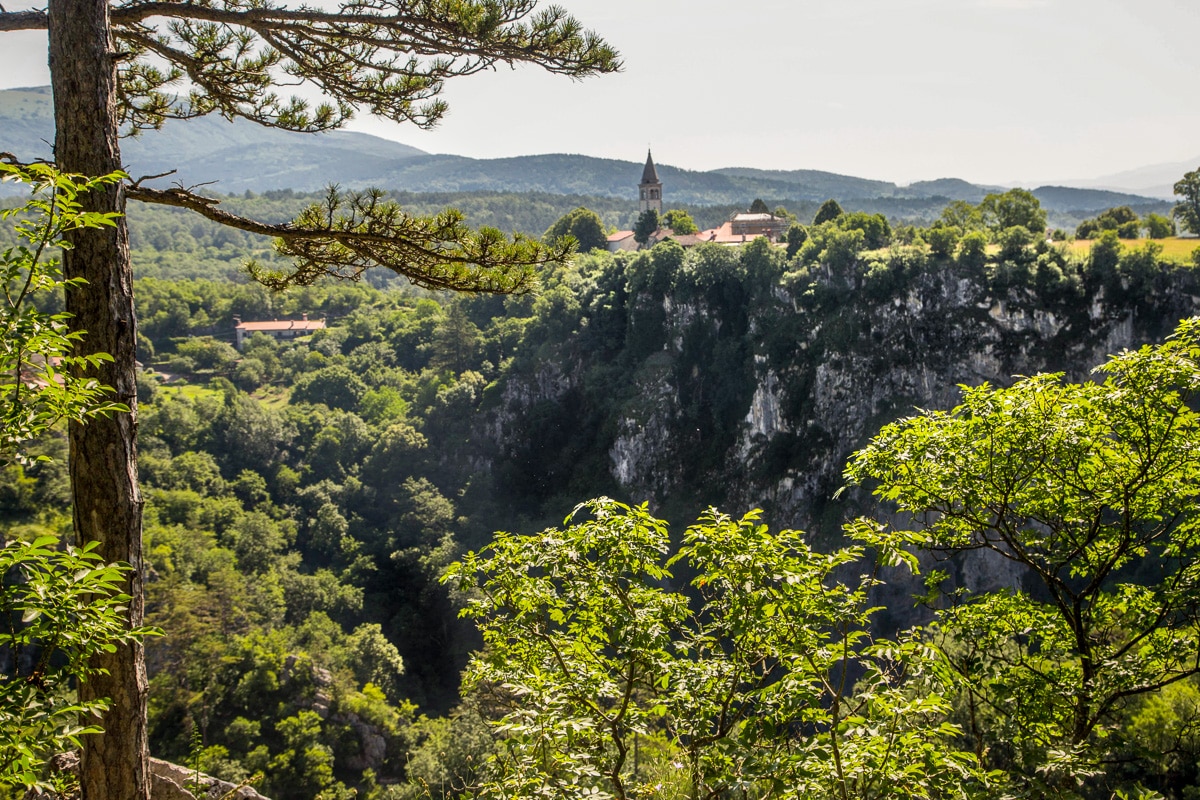 The Karst Plateau or the Karst region, also simply known as the Karst, is a limestone plateau region extending across the border of southwestern Slovenia and northeastern Italy. It is underlain by limestone that has been eroded by dissolution, producing ridges, towers, fissures, sinkholes, caverns, caves, and other characteristic landforms. The Slovenian Karst lent its name to karst landscapes and phenomena across the world, since it was here that geologists first described numerous karst features. 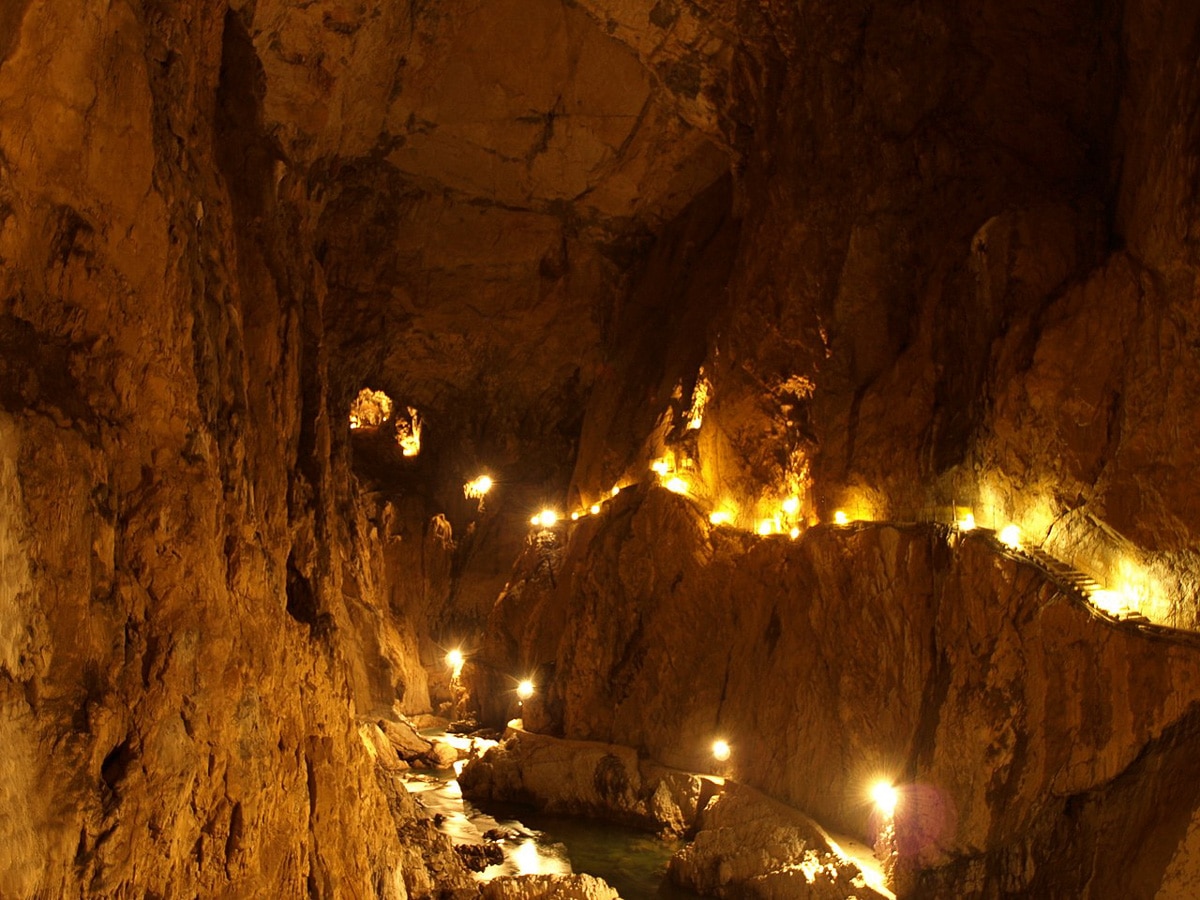 Our first stop was the Škocjan Caves, an excellent example of a karst feature. The vast cavern system features approximately 6 k (3.7 mi) of well lit, beautiful underground passages, deep chasms, waterfalls, underground lakes. Along the way fantastic stalactites and stalagmites, dripping and humid, decorated the floors and ceilings. The caves contain Europe’s largest underground gorge with the Reka River running 200m (over 650ft) below the surface, and are designated a UNESCO World Heritage site. Unfortunately, no photography was allowed, but we understood the restriction as you’d never get a group through in time.

On the way to the next stop on the tour, we stopped in a small village for a light lunch of locally produced prosciutto, cheese, olives, bread, and wine. A specialty of the area is the pumpkin seed oil, which was surprisingly delicious. 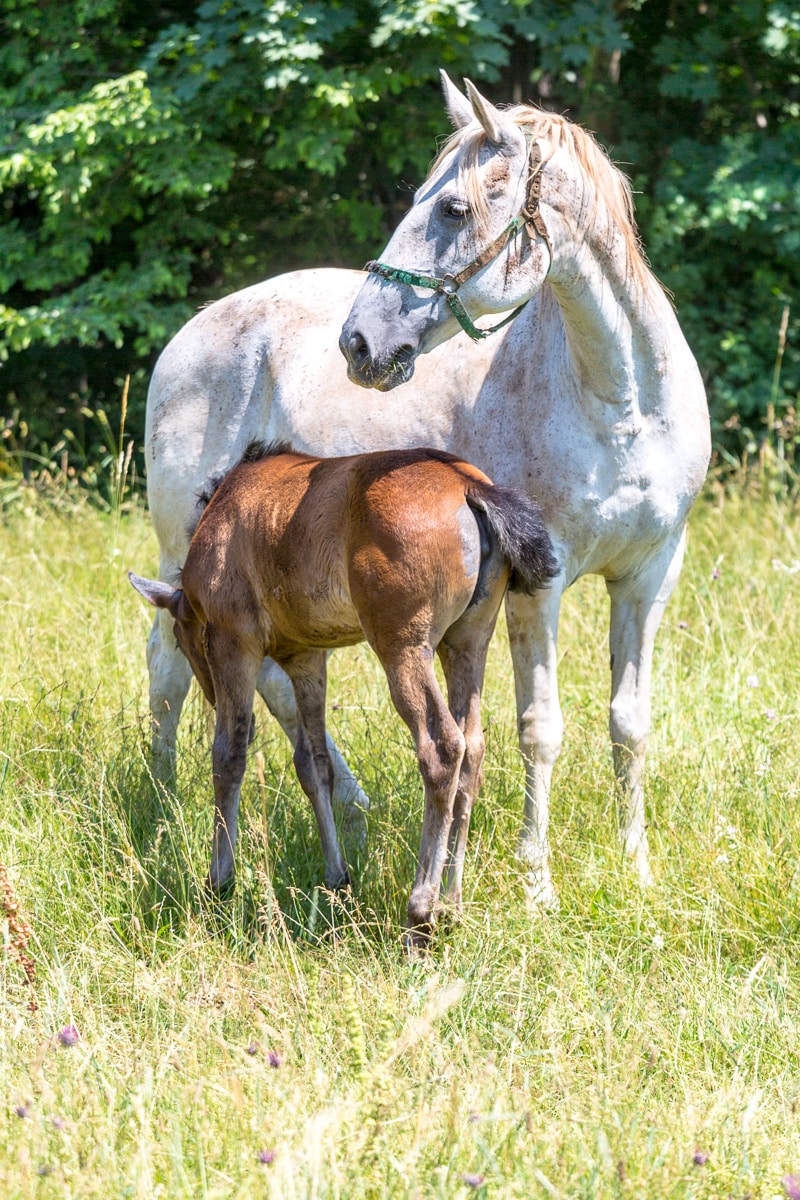 Our next stop was the Lipica Stud Farm, the original* home of Lipizzaner stallions. Established in 1580, it is considered the oldest stud farm with continuous horse breeding in the world. Unfortunately, this entry fee was not included in our tour price, and it was higher than what we wanted to pay, so we enjoyed some coffee with another couple on the tour. However, there were pastures nearby where we could view a number of mares and foals. Curiously, one particular feature of the breed is that they are not born white but bay, black or grey. It is only later, usually between five or six years old, that they turn white. 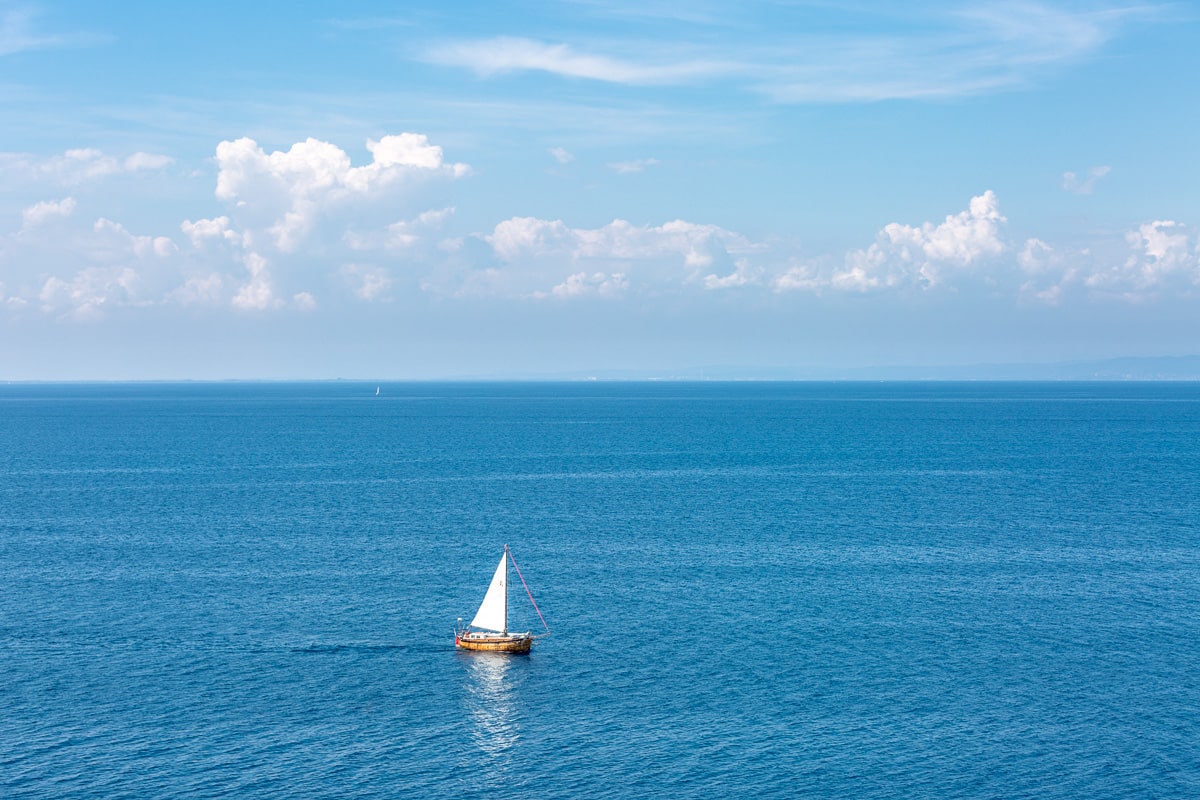 After visiting the horses, our next destination was to Slovenia’s 47 k (29 mi) coastline, sometimes referred to as the Slovene Riviera.  Sitting at the tip of a narrow peninsula is the small port town Piran, whose history extends back to before the Roman Empire, and was part of the Republic of Venice from the late 13th to late 18th century. Of course the best way to explore the old town is really by getting lost in its medieval narrow streets and houses, and discovering the charming things that can pop up around every corner. Getting lost is not much of a problem here. It’s small enough that one is never very far from the sea. 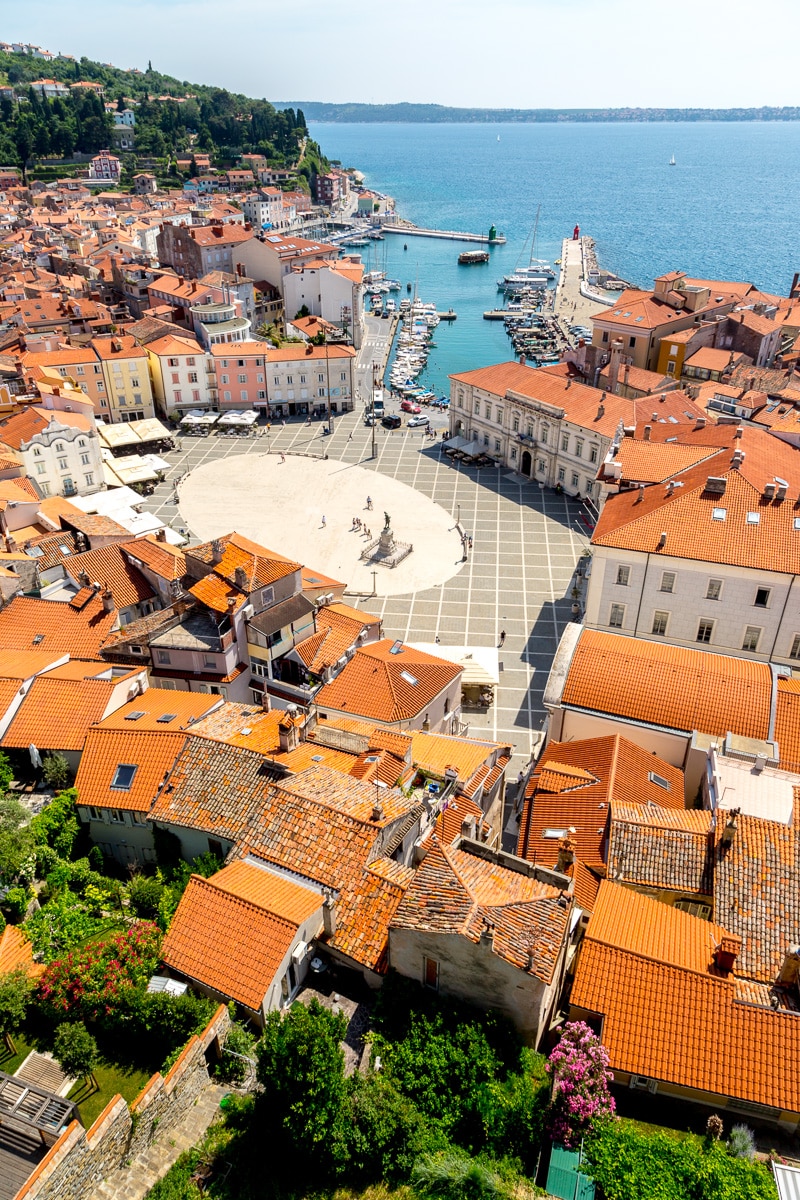 One of the great views of Piran is from the free-standing bell tower next to St. George’s Parish Church – a faithful replica of St. Mark’s Campanile in Venice. There were 150 wooden steps to get to the top, but the view of the town and the surrounding Adriatic Sea and Gulf of Trieste made it all worthwhile.

We detoured briefly for ice cream in the coastal town of Koper on the way home. It’s a favorite spot of our tour guide, and only 5 k (3.1 mi) from Slovenia’s border with Italy. It had been a busy day, we had seen a lot, with some interesting people, and we returned home to Ljubljana about 6:30.

We are generally not very enthusiastic about tours. It’s just not for us. But we really enjoy small day-tours like Roundabout Tours. We make sure that it’s a small van ( <18 people or less) and that they don’t try to fit too much into a single tour. And it’s nice to occasionally enjoy the freedom of not having to worry about organization, research, or trying to find transportation. Due to this tour’s style and variety, it was one of our favorite days in Slovenia … so far. It gets better!