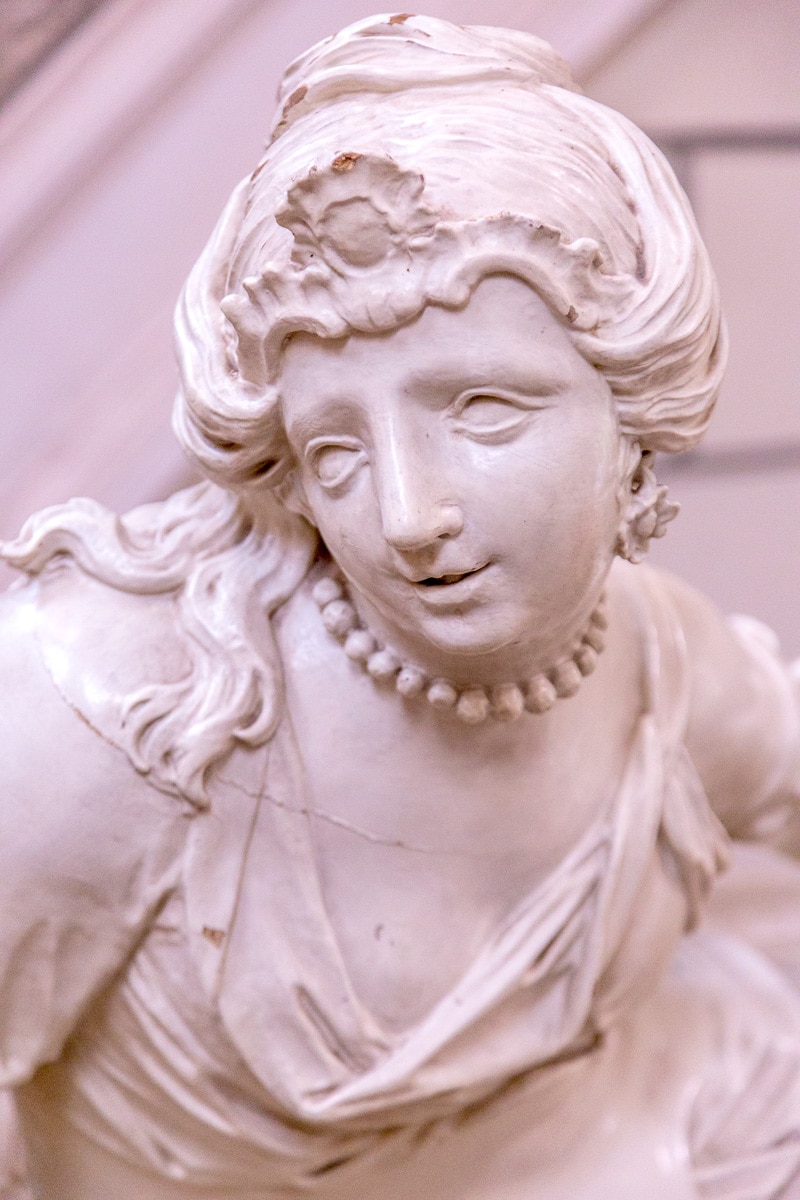 It was our last night in Ljubljana, but there was no rain or clouds or winds. Yesterday we visited a couple of museums, including the Slovenian National Museum, but Jeannie hadn’t been herself. After an early dinner she said “I don’t feel so great and my stomach is still a bit unsettled.”

Our alarm was set for 07h00, but Jeannie woke at 03h00, and she had a temperature of almost 102°F. She made multiple trips back and forth to the toilet over the hours.

Today really wasn’t a good day for this. We were supposed to finish packing, check out, then get picked up to go on to the next leg of our Slovenian adventure. But no, things happen, so I began the research for what we should do next. I called our travel insurance Allianz to register the medical need and get a claim number, just in case. At 07h00 I called the local medical center and after describing Jeannie’s symptoms they referred us to the University Medical Center urgent care. 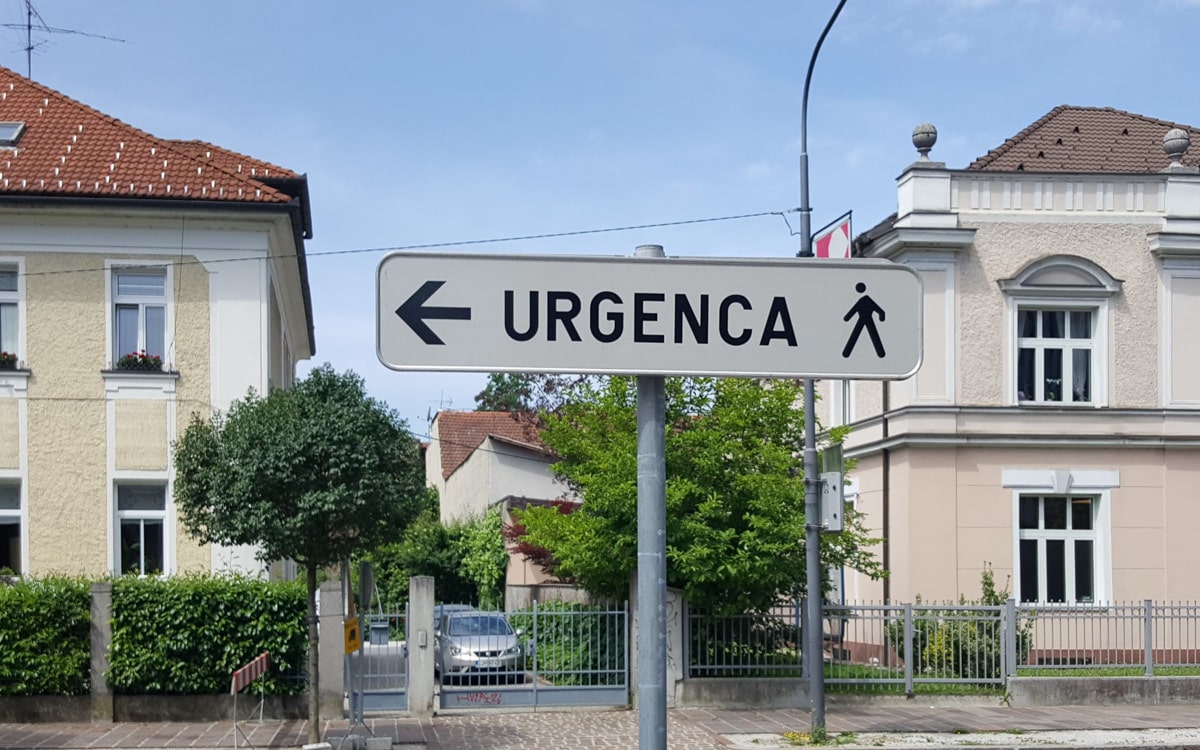 After notifying the apartment owners and sending a message to Luka, our walking holiday host who was scheduled to pick us up later, we took a taxi to the urgent care at the hospital. It was only a few blocks away but Jeannie was not feeling up to walking.

Navigating the urgent care system in Slovenia was relatively easy; fortunately most people speak English. We were directed across the large open waiting area to red door number four. Seems that the first thing you do is wait your turn in triage (not too long a wait on an early Saturday morning). 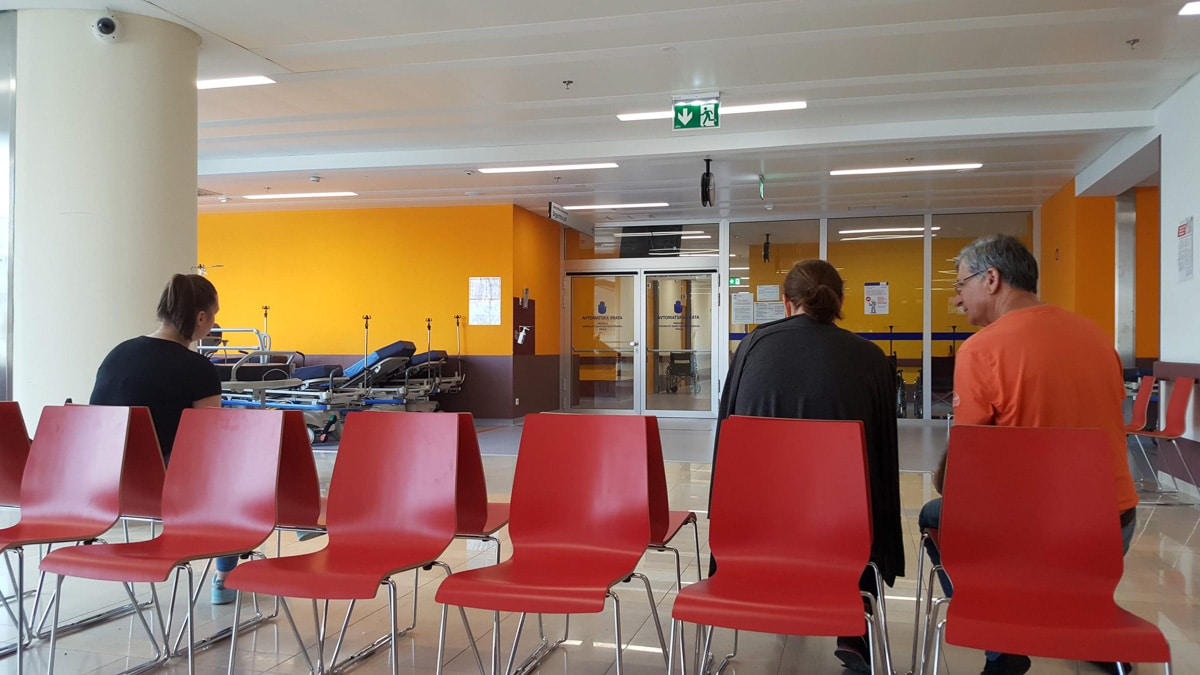 When it was Jeannie’s turn, I accompanied her into the small triage room. The nurse spoke English was fairly well as he asked all the requisite questions. There was only a slight fever now, but her blood pressure was very low. The nurse then gave us the paperwork to take to the office clerk, where an initial record was created and handed back. We were then directed to wait to be called from someone behind the glass doors. 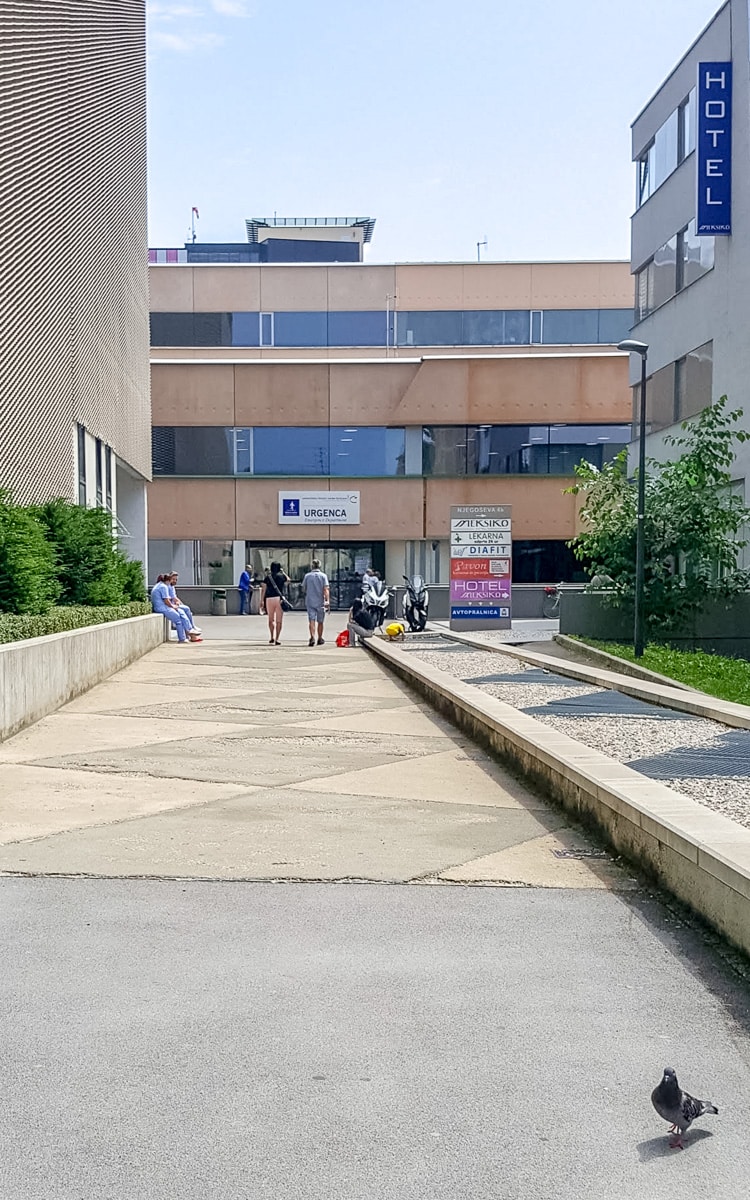 It wasn’t long before someone came out and called Jeannie’s name. It sure sounded different in Slovenian! After being led into an exam room, the doctor asked more questions and examined Jeannie further. She said they would take blood and urine samples, and give her fluids for dehydration.

At that point it was 09h30 and the cleaning people would be at the apartment by 10h00 and not all of our stuff was ready. So I left Jeannie in the waiting area and walked back to the apartment to take care of things.

Jeannie recalls: “A nurse drew blood, and then hooked up an IV. I lay back on the table thinking I can get some rest. But no, this space will be needed. So the IV bag is put on a stand with wheels. My hand is guided to the pole and I am led back to the waiting room. Oh and I am carrying an empty urine cup and pointed to the restroom so I can produce the sample when ready. Joy.” 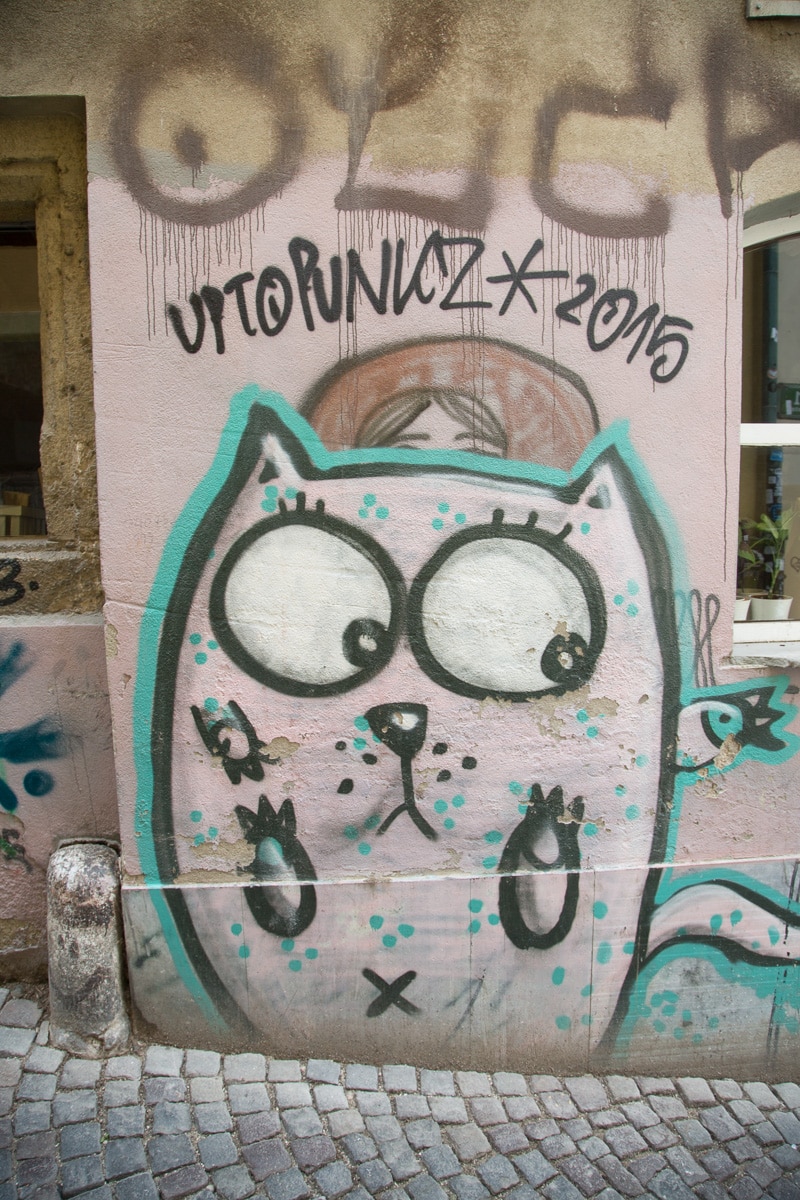 I finished at the apartment leaving the bags so the cleaners could work around them, and returned to join Jeannie in the waiting area. She was soon recalled and led back to the exam room for the test results. The blood work indicated a possible infection, so an antibiotic was recommended. In the end, the diagnosis was that it was probably a food born issue – the bane of travelers everywhere.

Next, we went back to the office clerk, paid our bill €79.85 (not quite $100), which was not bad for an ER visit, lab tests, and fluids, and then took the prescription around the corner to the pharmacy to be filled.

By this time it was almost noon, and Jeannie was feeling much better, in fact the best indicator was that she was hungry. She also felt well enough to walk the short distance back to the apartment. There was a café on the way home so we stopped for a light lunch.

As a result of my communication with Luka, he arranged for a taxi to pick us up from the apartment and take us to Pri Lenart, our next destination out in the country. 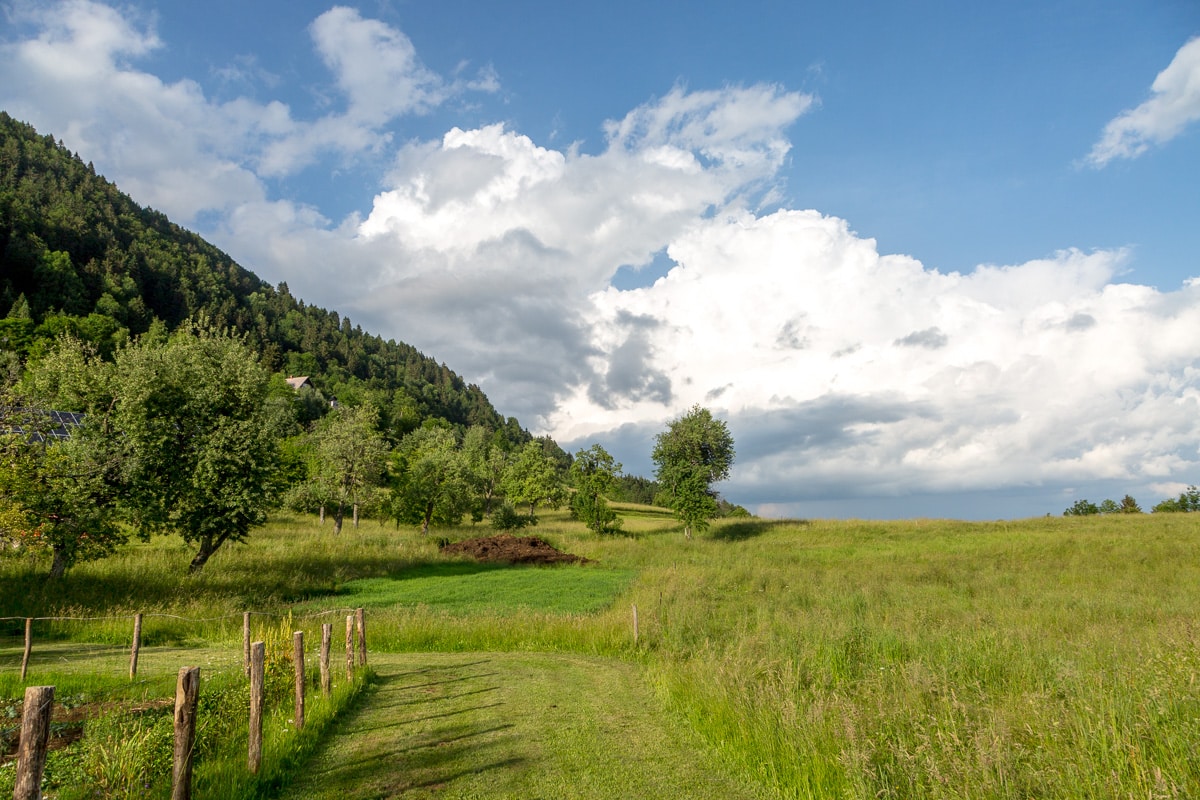 The taxi ride was pleasant. As we went further and further into the green countryside, up and down roads, then up and further up on narrow country lanes the views became even more beautiful. After almost an hour we arrived.

With her recovery progressing rapidly, we could begin to look forward to the hiking we would be enjoying over the next week.

Some parting shots taken on the last couple of days around Ljubljana (before the “storm”).