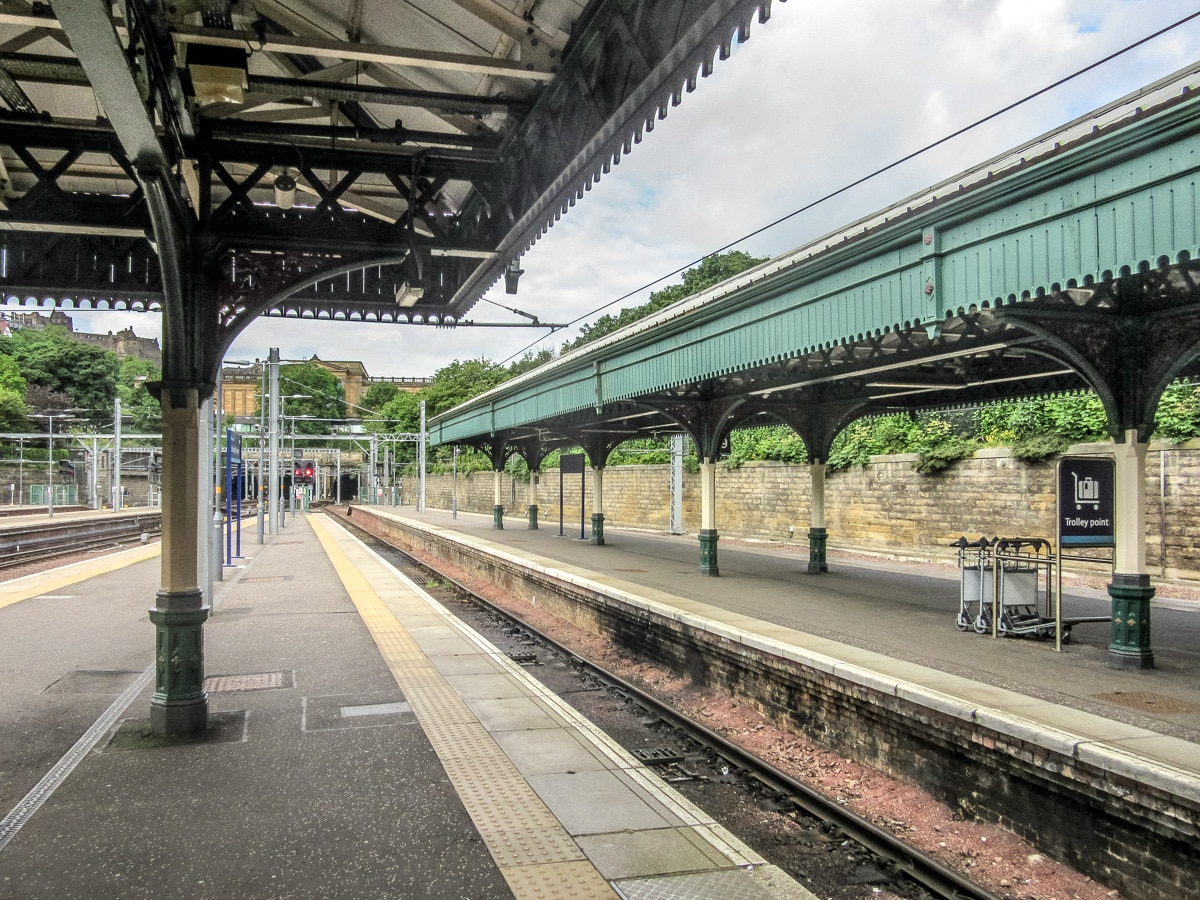 After our first visit to the Highlands, we were eager to see more of this remote and rugged land. We had also heard that the Hebrides Islands off the western mainland were spectacular and still more remote. Thus we began our studies on where to go and how to get there.

It is always a difficult decision on whether to select transportation or lodgings first. Whichever you choose, the other will book-up first. And since we were in the midst of high-season, we needed to act fast.

Transportation by train was relatively simple. We would take the train from Edinburgh to Kyle Of Lochalsh by way of Inverness and it would take just under seven hours. As the crow flies it was a distance of 131.71 mi (211.97 km), but as the train rolls it was much further, having to wind around mountains and lochs. 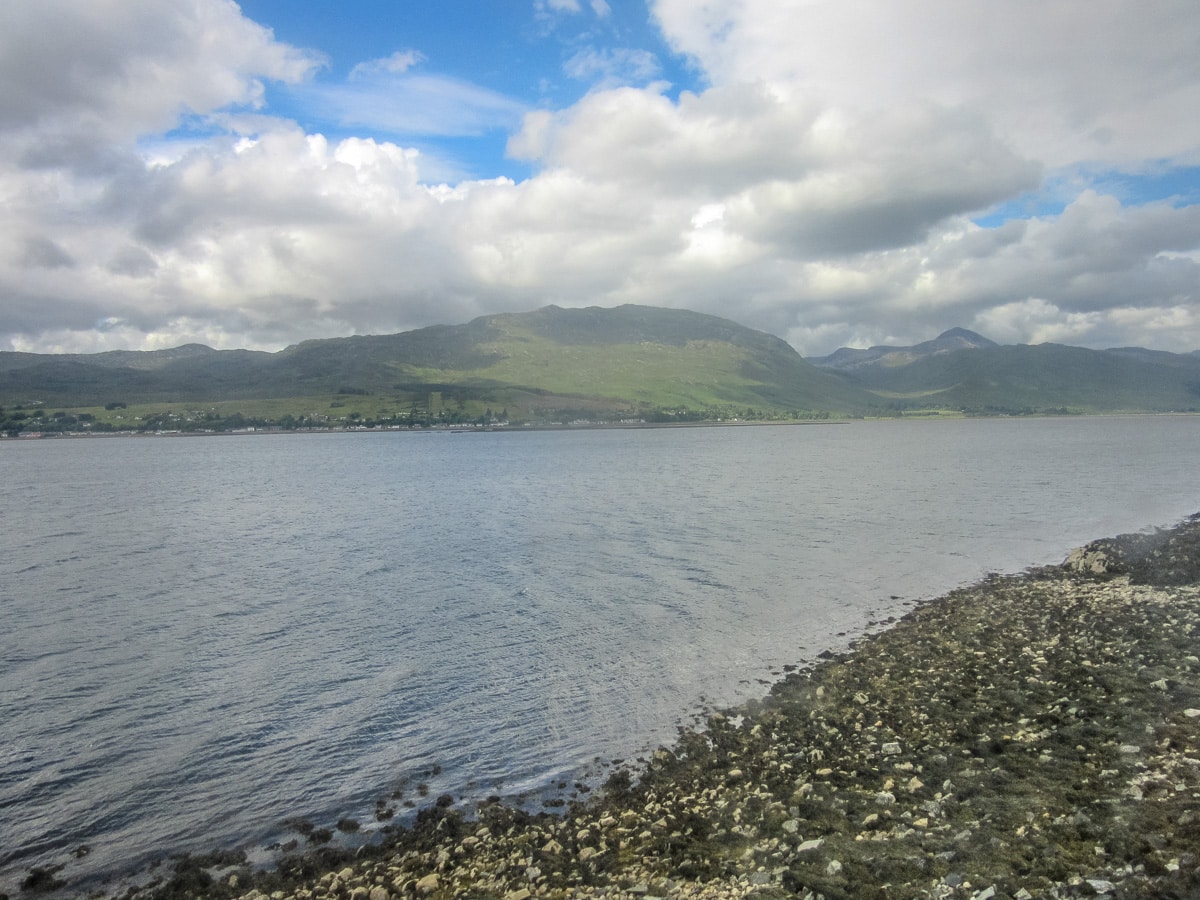 The trip through the Scottish countryside to Inverness was quite lovely indeed. Weaving around large rolling hills, we made our way north to Perth, then northwest to Inverness where we changed trains. It was then that the route moved from being quite lovely to being spectacular.

This stretch of railway, the Kyle Line, has been featured on the BBC series Michael Palin’s “Great Railway Journeys”, and it wasn’t difficult to see why.  The scenery changed constantly, through some of the most extensive and unspoiled wilderness in Europe.

We passed by many small towns with interesting names such as Strathtay and Strathtummel, through Dunkeld and Pitlochry, Killicrankie, Blair Atholl, Dalwhinnie, and Kingussie, but the trains don’t stop at most of these small towns and villages anymore.

When we arrived in Kyle of Lochalsh we were expecting to be able to catch the bus to take us to Portree, an hour drive up into Skye. Of course, the train company and the bus company are in competition with each other and don’t coordinate schedules of arrivals and departures, so when the train arrived, the bus had departed 10-minutes earlier. 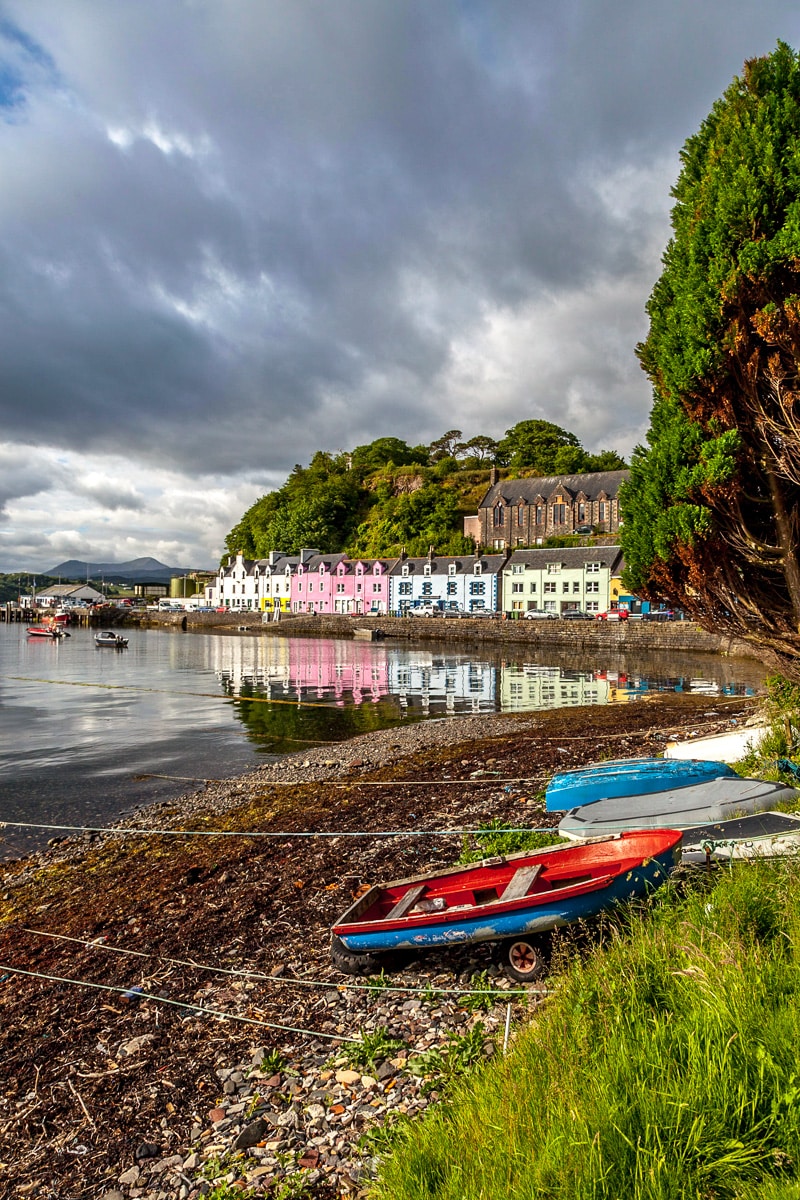 Well, by then it was 17:30 (5:30PM) and the next bus would not depart for another three hours. Though our hotel room would likely be held, we didn’t want to hang around Kyle of Lochalsh with our luggage, much less get into our room after 21:00 (9:00 PM).  So we bit the bullet and got a taxi.

As it turned out, except for the cost, it was a great trip. Our driver was in our age bracket, very congenial, interesting, and informative. We soon arrived in Portree, the small, picturesque capital of Skye with its old brick buildings set around a well-kept town square and clustered colorfully around a sheltered harbor.

We checked in to our hotel and got ready to explore. The view from our room was spectacular, looking out over the harbor with the mountains in the background. We would be here for two nights, and it was a good choice. After our explorations of this beautiful little town, we ate a good dinner then turned in with the late summer sky still glowing over the horizon. 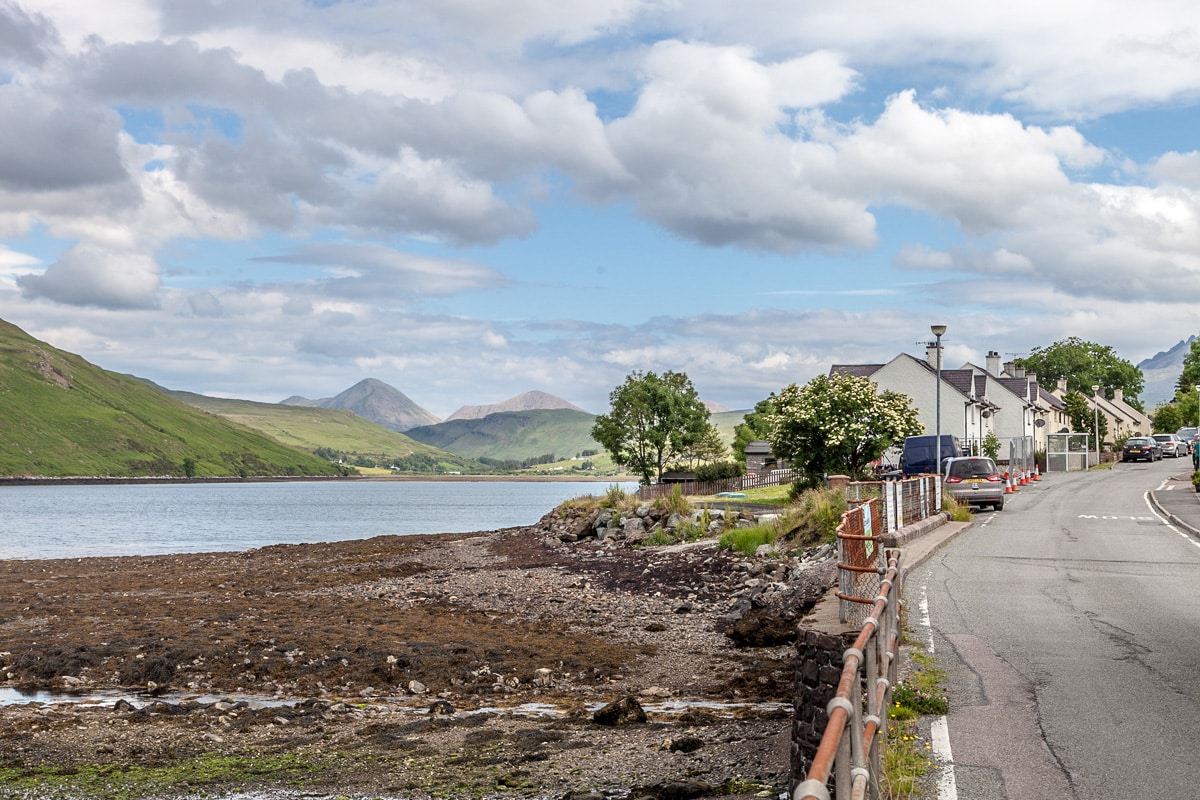 The next day we had booked into a small-group (seven persons) tour around the Island, and after a hearty breakfast were picked up early just outside our hotel. The tour van made stops at most of the tourist highlights, and several off-the-beaten-path places, and provided lots of information about the historical, cultural, and geological significance of the area.

Throughout the entire circuit of the island, the single most significant observation that we had was the remoteness of the area. For example, there are villages that didn’t get electricity until 1950s, and until 1995, the only way to get to Skye was by boat when the bridge was built at Kyle of Lochalsh.

The Storr Lochs and in the distance, Old Man of Storr, a mountain that resembles the profile of an old man’s face, Lealt Falls, near the site of an old diatomaceous earth mine.

Lealt Falls, near the site of an old diatomaceous earth mine.

Kilt Rock indeed resembles a kilt, with vertical basalt columns forming the pleats and layers of dolerite that form the pattern.

The Quiraing is a ridge created by a series of massive landslips or landslides over time. Here, part of the slip is still slowly moving, and the single-track, asphalt, pass road, with steep grades and tight bends requires repairs each year.

Fairy Glen, a mythical place of small, grass-covered, conical hills with circular ridges going around them and small lochs. Fairies are said to live in these grassy beehive-knolls that were the result of ancient glacial activity.

Dunvegan Castle is the oldest continuously inhabited castle in Scotland and has been the stronghold of the chiefs of the Clan MacLeod for more than 800 years.

Dun Beag is an example of a broch: a kind of Iron Age round stone tower only found in Scotland. It was likely built around 2,000–2,500 years ago. While there, we heard bagpipes. It was an odd sound in such a remote location until we saw a young couple who had just exchanged their wedding vows in the presence of only the marriage officiant, the piper, and the Skye wilderness (and us).

The Fairy Pools, in the shadow of the Cuillin Mountains, are a series of vivid blue and green pools formed by small waterfalls and cascades that legend suggests are of an unnatural origin.

The view of the Old Sligachan Bridge with the Cuillin mountains in the background is stunning.

After a wonderful day, with good weather I might add, we were dropped off back at our hotel where we cleaned up and went out to find a place for dinner. 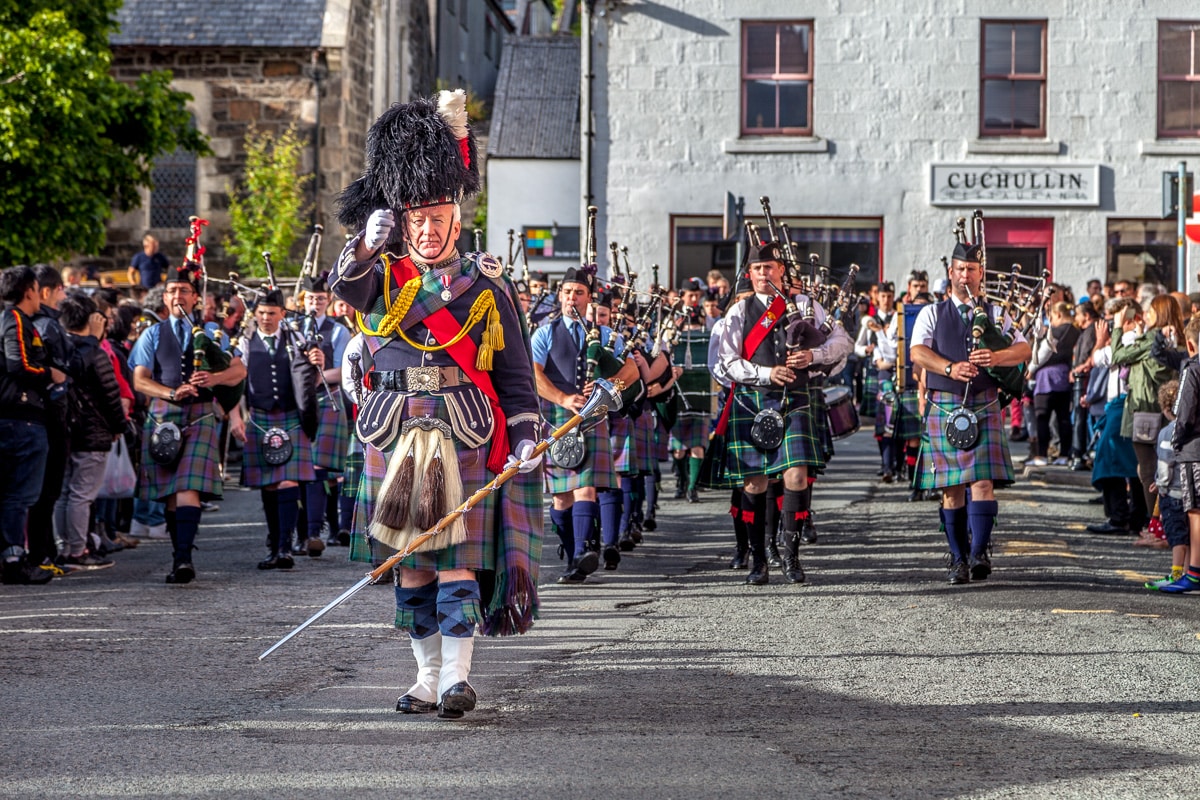 After stopping for a drink, we made reservations for dinner. Then we decided to take a stroll through the neighborhood. As we walked about, we heard the sound of bagpipes, and inquiring of a gentleman who was dressed in formal Scottish attire, learned that there was going to be a concert around the town square of the local Pipe and Drum marching band. The concert was fun and, being in Scotland, it fit in with the surroundings adding to the already marvelous experience of the day. 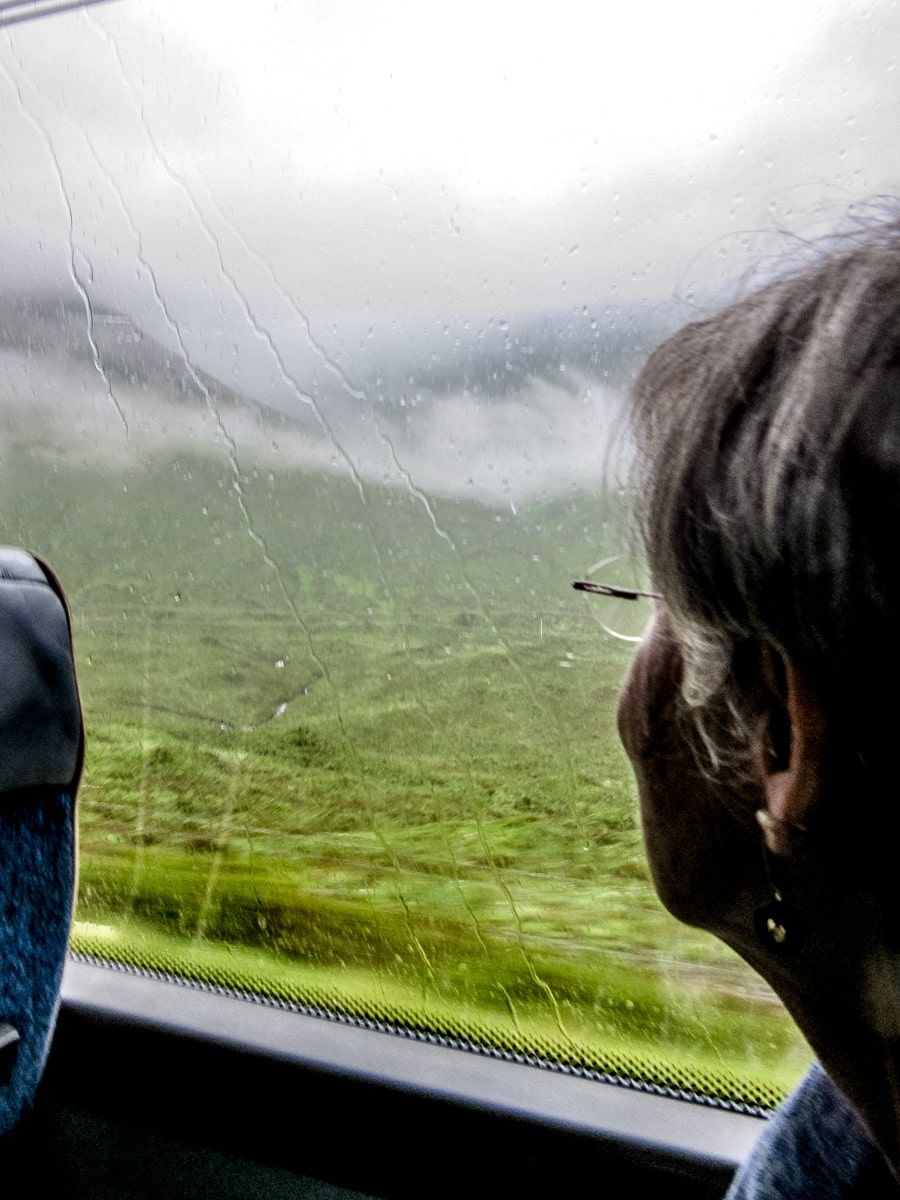 The following day, after breakfast, we packed up our backpacks, and strolled (or should I say coddiwompled) about the town before catching the bus for the trip to Armadale where we would take the ferry to Mallaig where we would catch the train for the journey back to Edinburgh. 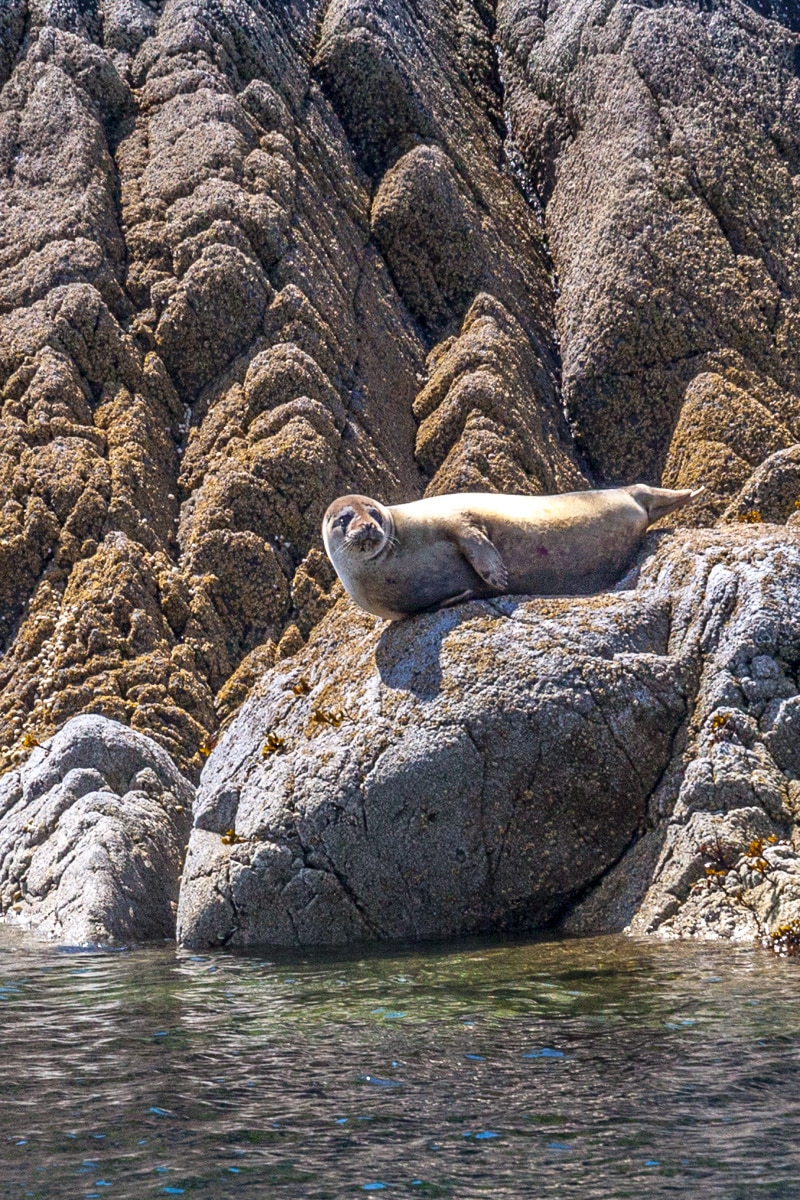 The bus ride was good, as we passed through some more amazing landscapes, again weaving between mountains, through valleys and along lochs. And after about an hour we arrived at the ferry port at Armadale where we purchased our tickets for the 8k | 5mi crossing to Mallaig. We didn’t have to wait long, and were soon on our way back to the Scottish mainland where we had a 3-hour wait for the train. We amused ourselves with a light picnic lunch by the harbor and an inexpensive boat trip out to tour the harbor and see some seals.

The train departed right on time (with us on it). Though it is hard to imagine that the terrain could be more impressive than what we had experienced for the last few days … but it was. This leg of our travel would be aboard the West Highland Line, and was going to be a 7-hour train trip. But what it took in time would be returned in a visual feast. 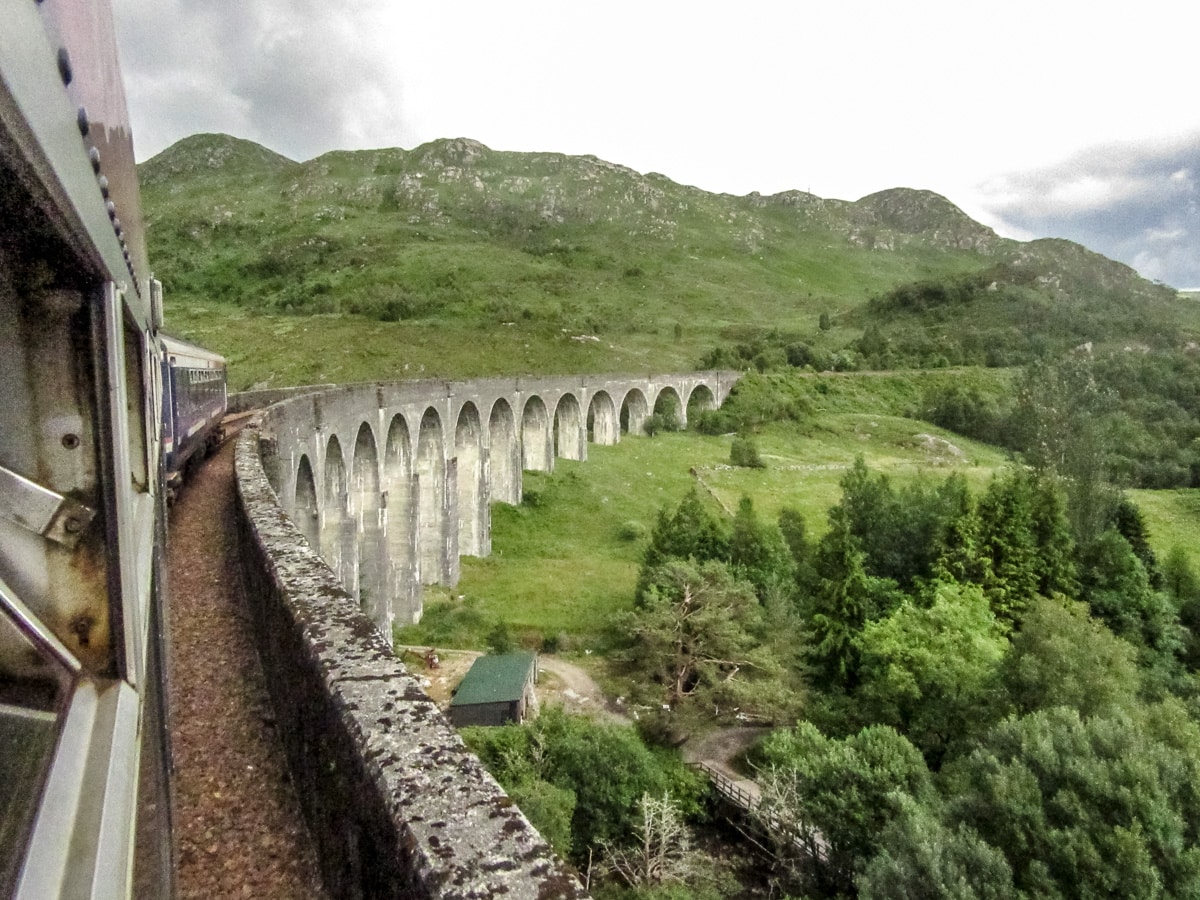 The West Highland Line was voted the most scenic railway line in the world three years in a row by readers of travel magazine Wanderlust. Built in the late 1800s and running through some of Scotland’s finest scenery, it passes mighty mountains and rugged moorland. There are 350 viaducts and eleven tunnels. The longest viaduct is on Rannodch Moor at 208m | 684 ft in nine spans of 21m |70 ft; and of the eleven tunnels, only two were originally planned, and the longest is 320m |1050 ft long.

We also crossed Glenfinnan Viaduct …  an impressive concrete structure 380m |1248 ft long with 21 arches that was prominently featured in the Harry Potter films.

A 4.5 hour video of the journey from Glasgow to Mallaig, the reverse of our journey, can be viewed here. It shows a great view from the cab of the train and is worth skimming through to see what I couldn’t photograph well from within the train.

Sitting and watching the Scottish Highlands pass by was particularly relaxing as I didn’t have to drive (on the opposite side of the road), and Jeannie didn’t have to help. It was a trip that was better than either of us had expected. The weather had cooperated with only a wee bit of rain – but it is Scotland you know. The memories will last, but if they fade, we will still enjoy the photos … as can you.