Some readers have wondered how we came to have good friends like Niels and Jetta in Denmark. The story began many years ago … 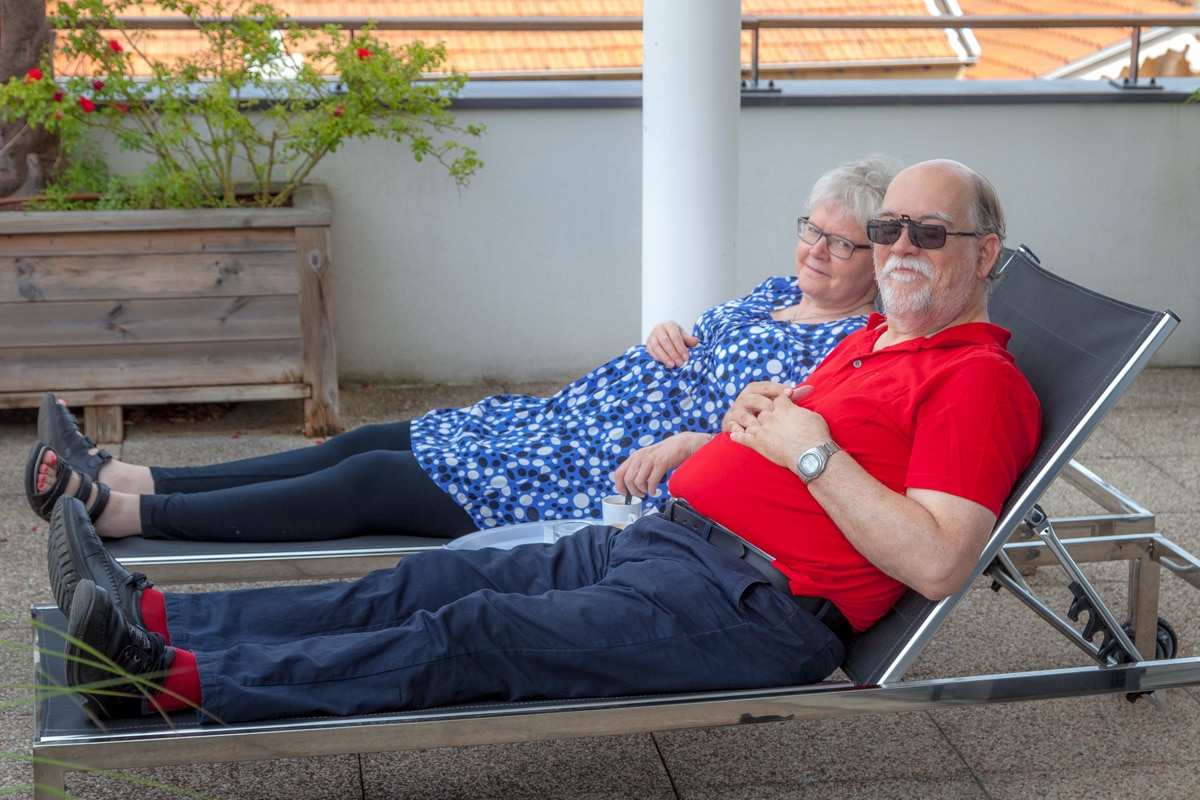 Niels worked for the Danish telephone company that purchased software from Jeannie’s employer. Over the course of several years as they and their coworkers met to plan and implement the software, Niels and his colleagues spent time in Florida to work on new upgrades and Jeannie also traveled to Copenhagen to interact with their local team. After the business relationship concluded, we stayed in touch. Niels and his wife Jetta spent several vacations in the US, and would often spend time in Florida, always making time to visit. Our friendship deepened on each these visits. 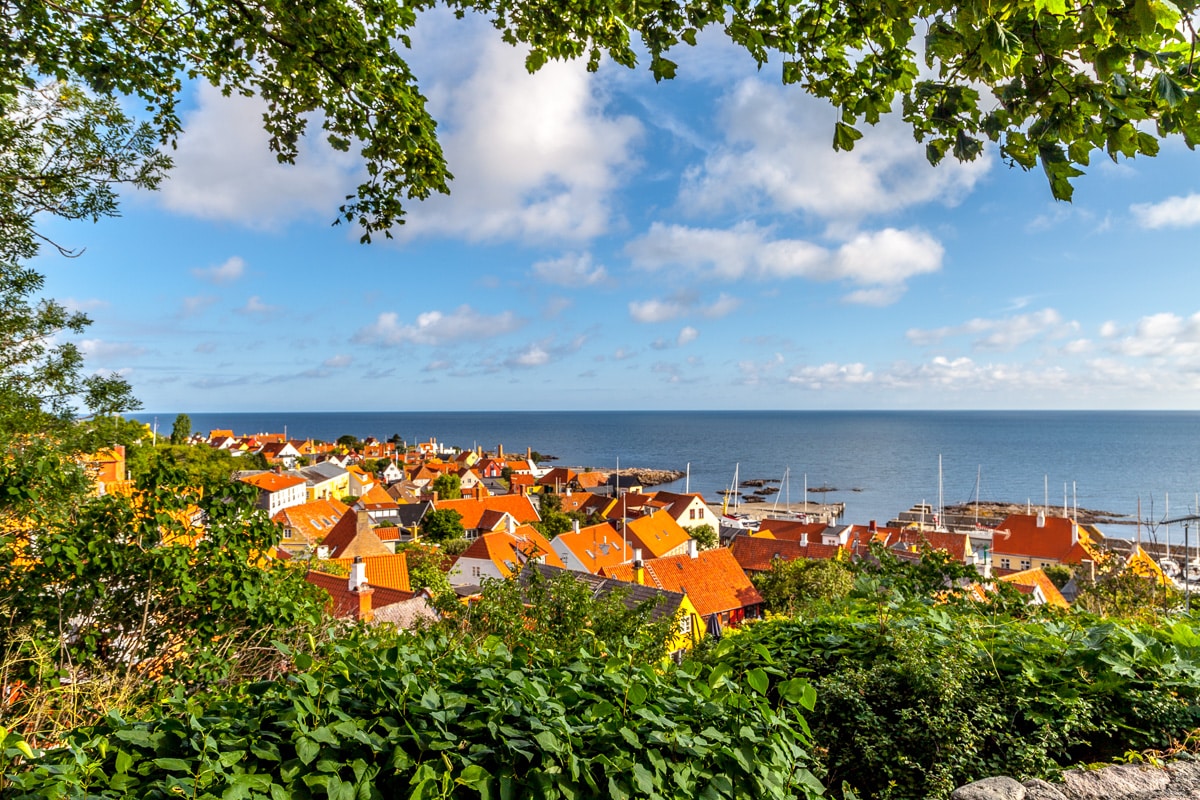 With good friends, it doesn’t take much effort to find opportunities to meet and continue friendships. When we began our nomadic adventure, Niels and Jetta aligned their vacations to meet us in Brussels in 2014, and then in Lyon and Strasbourg in 2015. So we decided Copenhagen needed to be on our itinerary in 2016, to visit them in their country.

Thus we arrived here on the Danish island of Bornholm, out in the Baltic Sea. 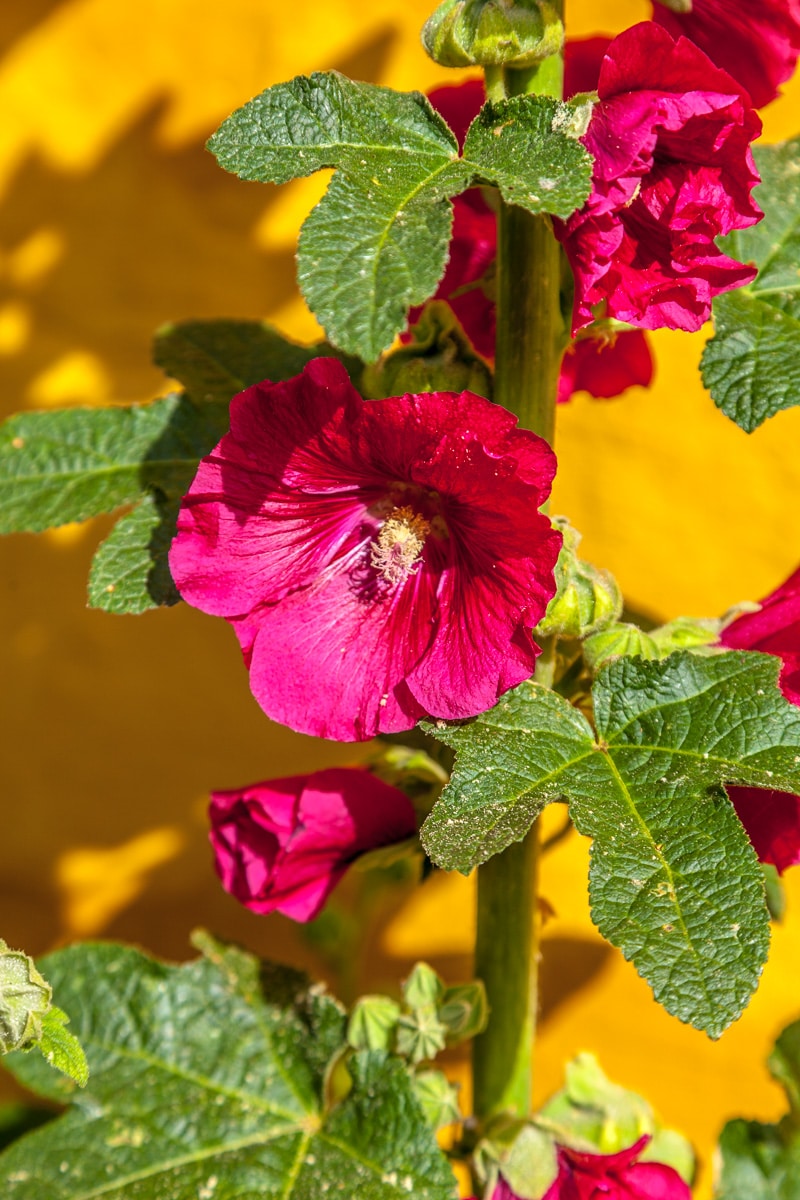 After a great dinner at a typical smokehouse buffet, we had a restful night’s sleep with the windows of our room open to the cool, refreshing sea breeze. We had a delicious breakfast in the hotel’s bright and cheerful sunroom, and we then were ready to explore the Island of Bornholm. Though not huge, it is approximately 32 km x 19 km (20 mi x 12 mi) and rhomboidal in shape. While its strategic position in the Baltic Sea means that it has been fought over for centuries. 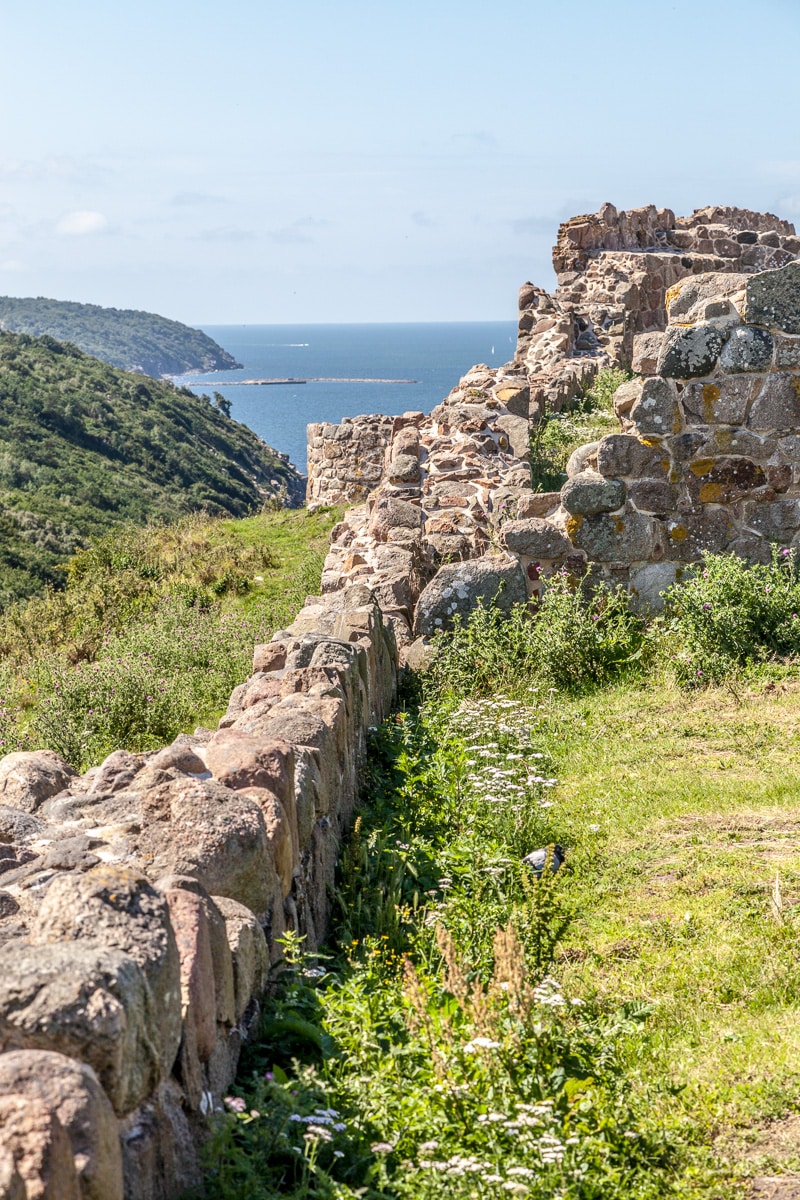 Our first destination for the day was the imposing medieval fortress of Hammershus. Perched 74 meters (243 ft) above sea level on the cliffs of northwest Bornholm, it is perhaps Denmark’s best-known ruin. Current research says that Hammershus may have been built as early as the early 12th Century when the crusades began. Beautifully and strategically situated, the combination of the ancient ruins and stunning views over the sea made Hammershus an impressive place to visit.

After a brief stop at Hammerhavnens harbor, we explored around the lakes of Hammersø and Opalsø. Hammersø is a tarn (a mountain lake or pool, formed by a glacier), while Opalsø is a beautiful, blue, artificial lake formed in an old granite quarry. We had worked up quite an appetite by then so we stopped for a delicious lunch in the town of Vang at a sea-view restaurant (Le Port), before we continued exploring Bornholm. 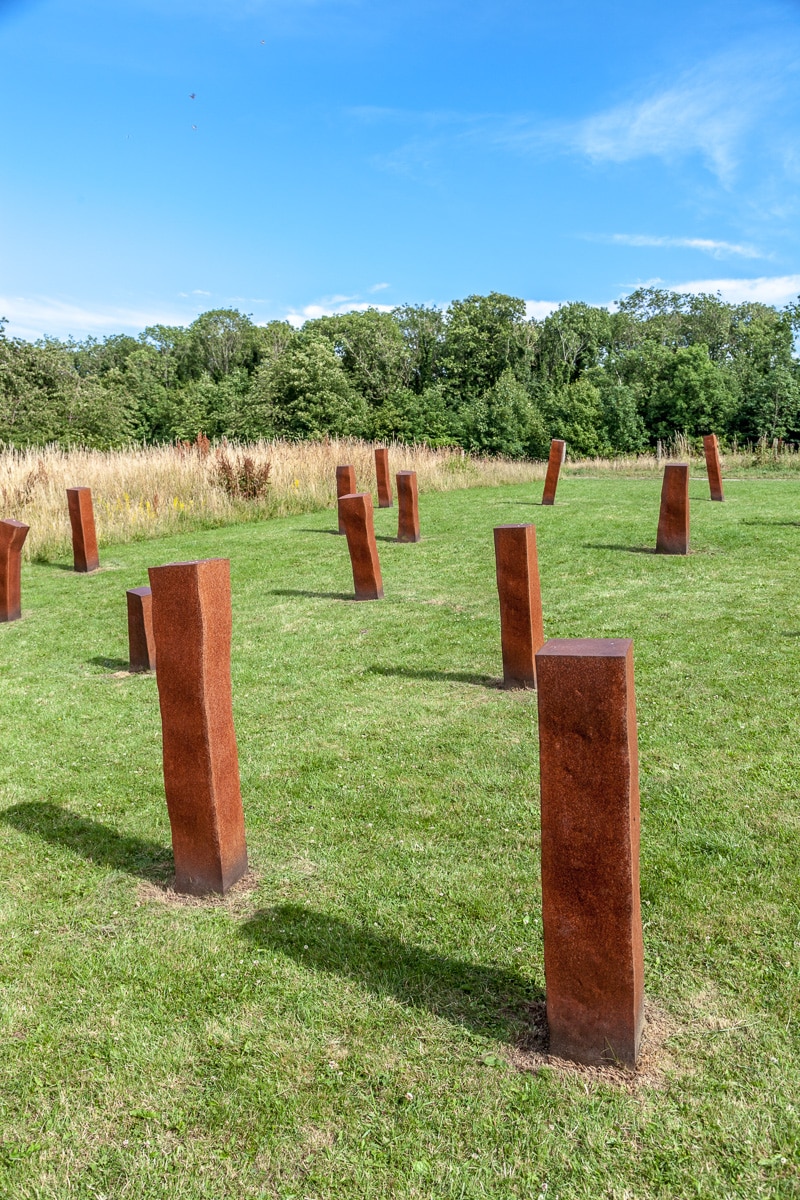 Our next destination was the Bornholms Kunstmuseum at Helligdomsklipperne. While Niels and Jetta visited the museum, Jeannie and I really needed more time outside in nature, so we walked to the high coastal cliffs with its steep craggy granite pillars. In the Middle Ages, a sacred spring at the base of the cliffs attracted pilgrims hoping to be cured of illnesses, especially on Midsummer’s Night. 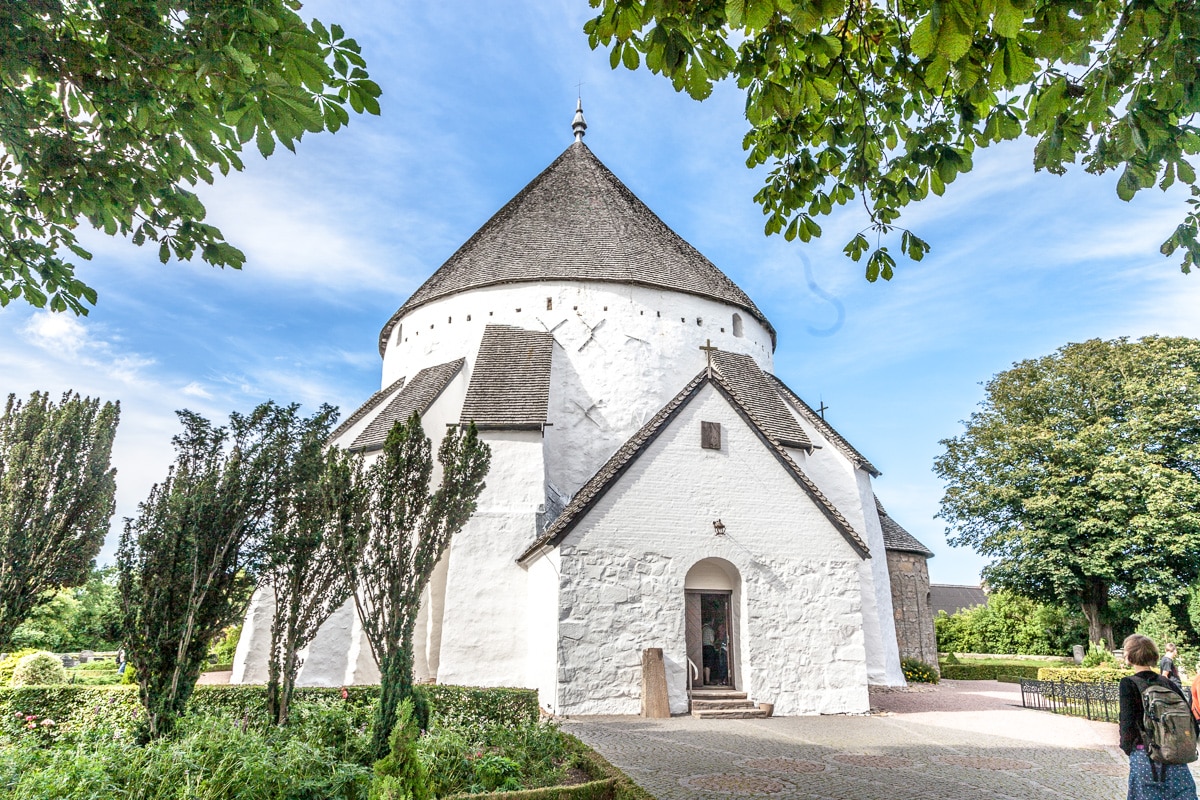 It had been a long day, but on the way back to Gudhjem we had wanted to stop at one of the four medieval round churches (rundkirke) located on Bornholm.  Østerlars Church, dedicated to St. Lawrence, is located just north of the village of Østerlars. It is the largest round churches on the island and is said to have been built around 1160, and just like Hammershus, is thought to have a connection to the Crusades. 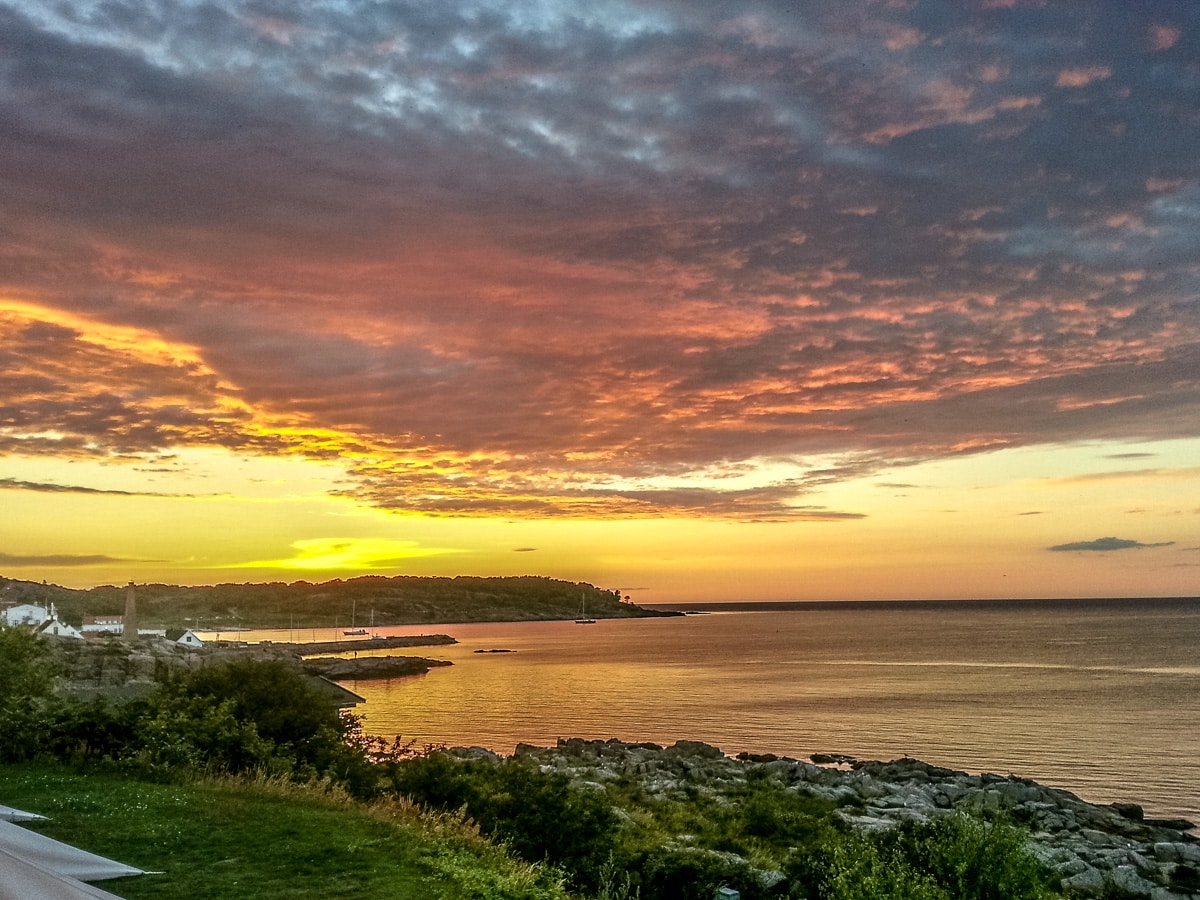 After returning to Gudhjem, we took some time to rest and clean up before driving north along the coast a few miles to eat at Sommer Pony, a highly-rated seafood restaurant overlooking the Baltic. After a wonderful meal and a beautiful sunset, we returned to our hotel and slept a sleep of well-fed Vikings. 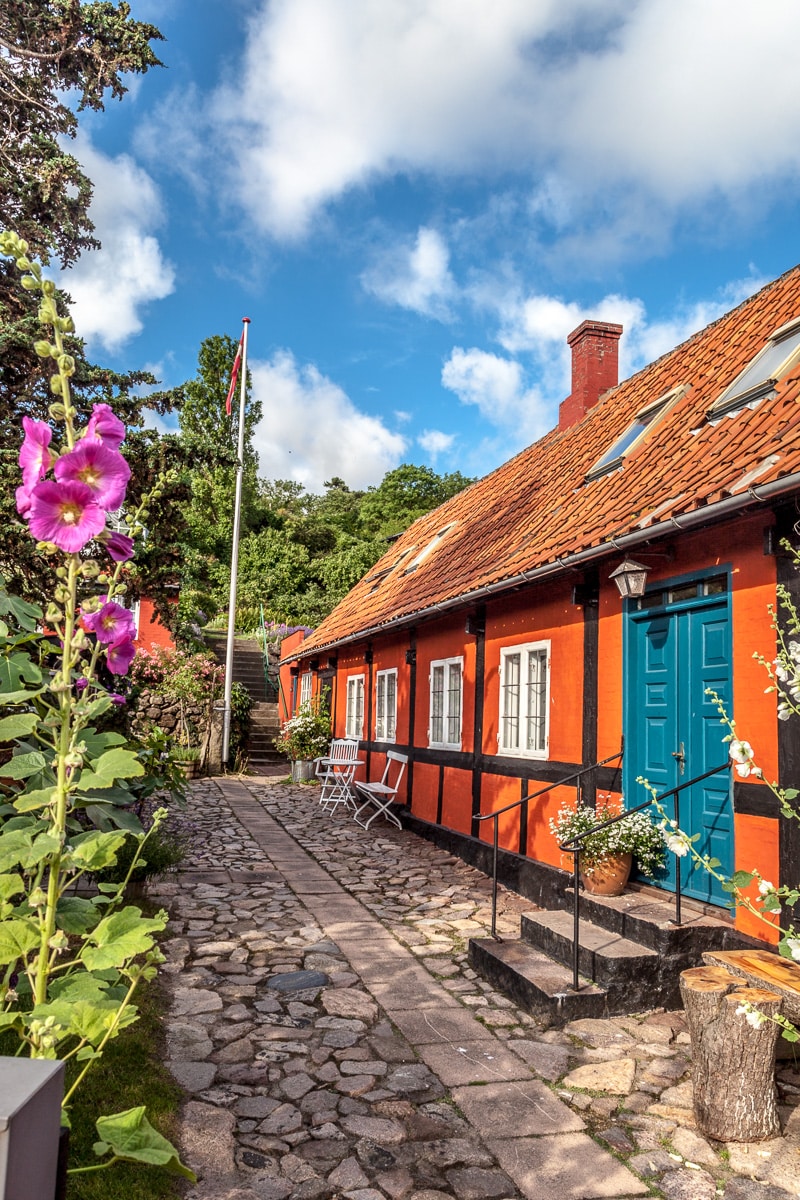 In mid-July, the sun rises early this far north, about 4:30 am to be more exact. Thus far, we have been somewhat successful in sleeping well beyond sunrise, but only on rare occasions do we ever make it past 7:30.

On this day however, the temperatures were milder than we had experienced for months, and the beautiful town of Gudhjem, with its colorful houses, boats and blue skies called me to get out and make photographs.

After wandering about the empty, early-morning streets for an hour or more, the need for breakfast and coffee lured me back to the hotel. After another delicious meal, we packed up and took off for another day of exploration before we had to return to Copenhagen. 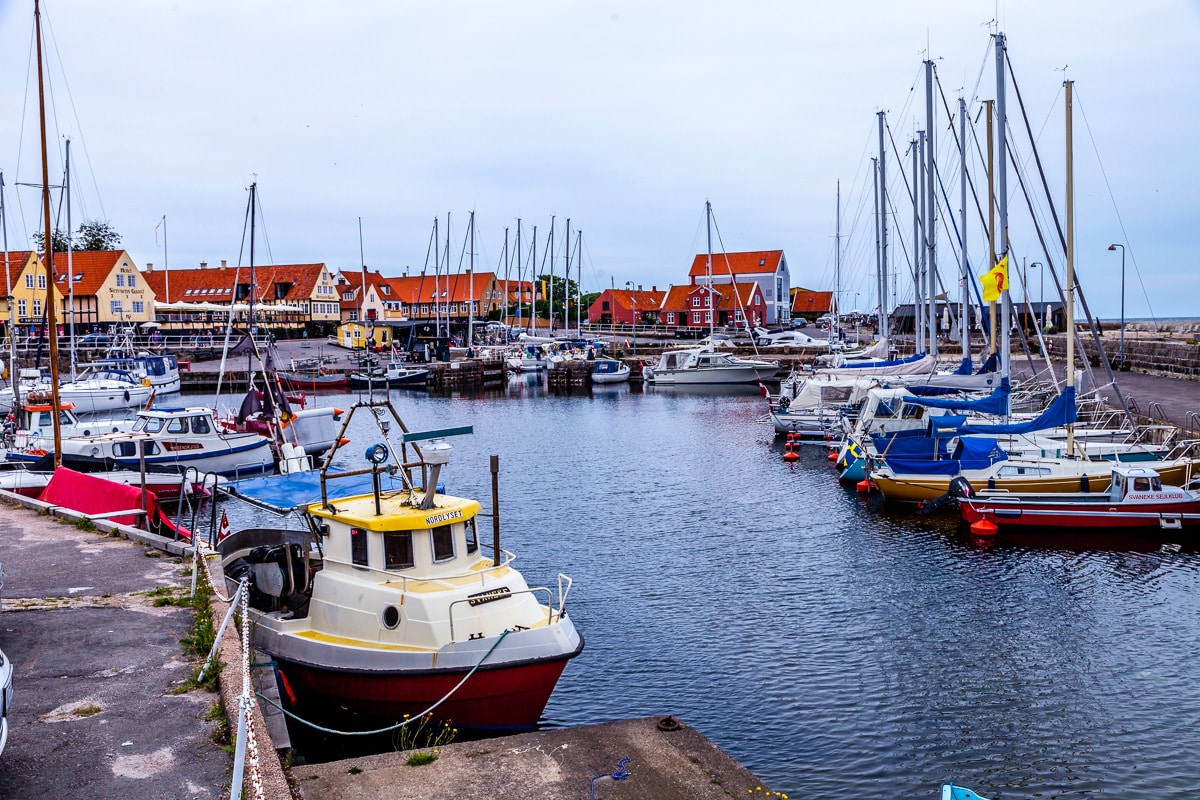 Since our return ferry reservation wasn’t until 18:00 (6:00pm), we had a good part of the day to roam. The first destination was another small fishing village of Svaneke, located at the eastern-most point of the island. Approaching the town we stopped to visit a water tower designed by a famous Danish architect, and an old restored windmill. 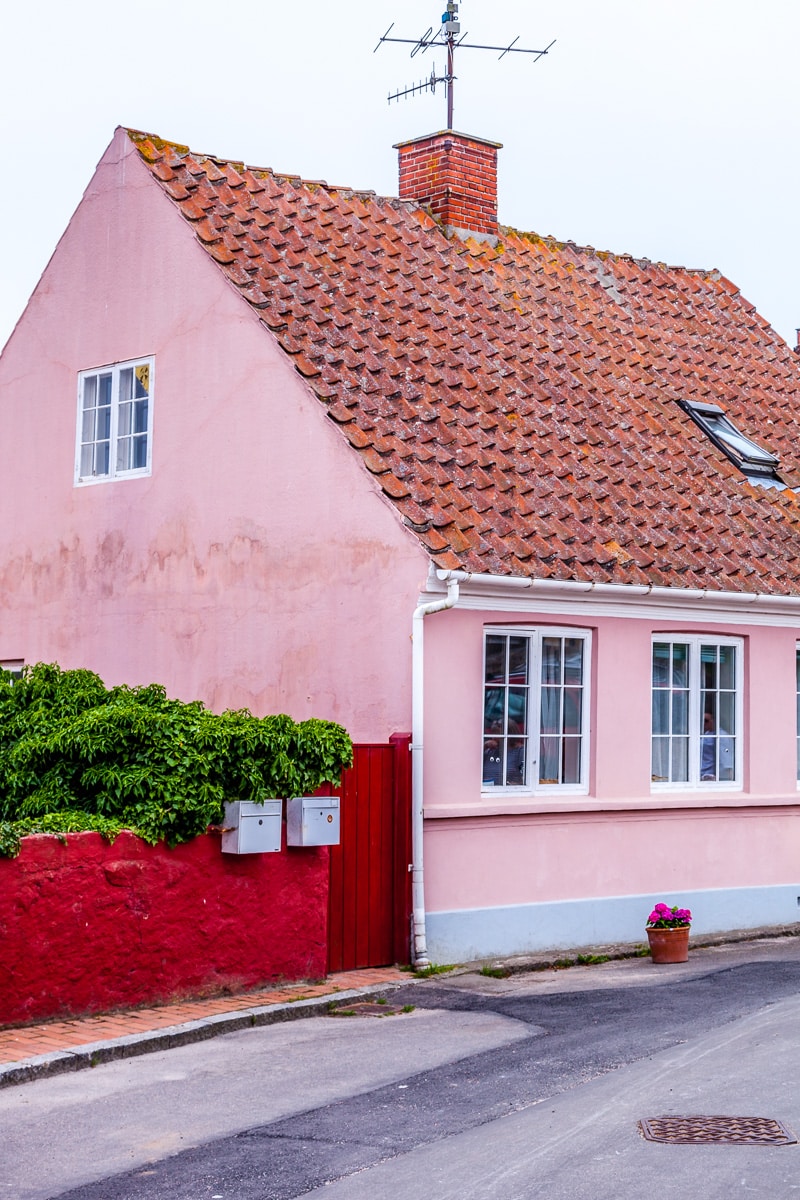 The town of Svaneke probably dates back to the 13th century when herring fishing was the primary industry along Bornholm’s east coast. In the 18th and 19th centuries, trade and shipbuilding grew in Svaneke, resulting in the building of many fine merchants’ houses.

The town center, just up from the harbor, is well-preserved with quaint red-roofed, brightly-colored, half-timbered houses. The narrow winding streets are also a center for arts and crafts with everything from glassblowing to ceramics, not to mention a small sweet factory and a brewery. 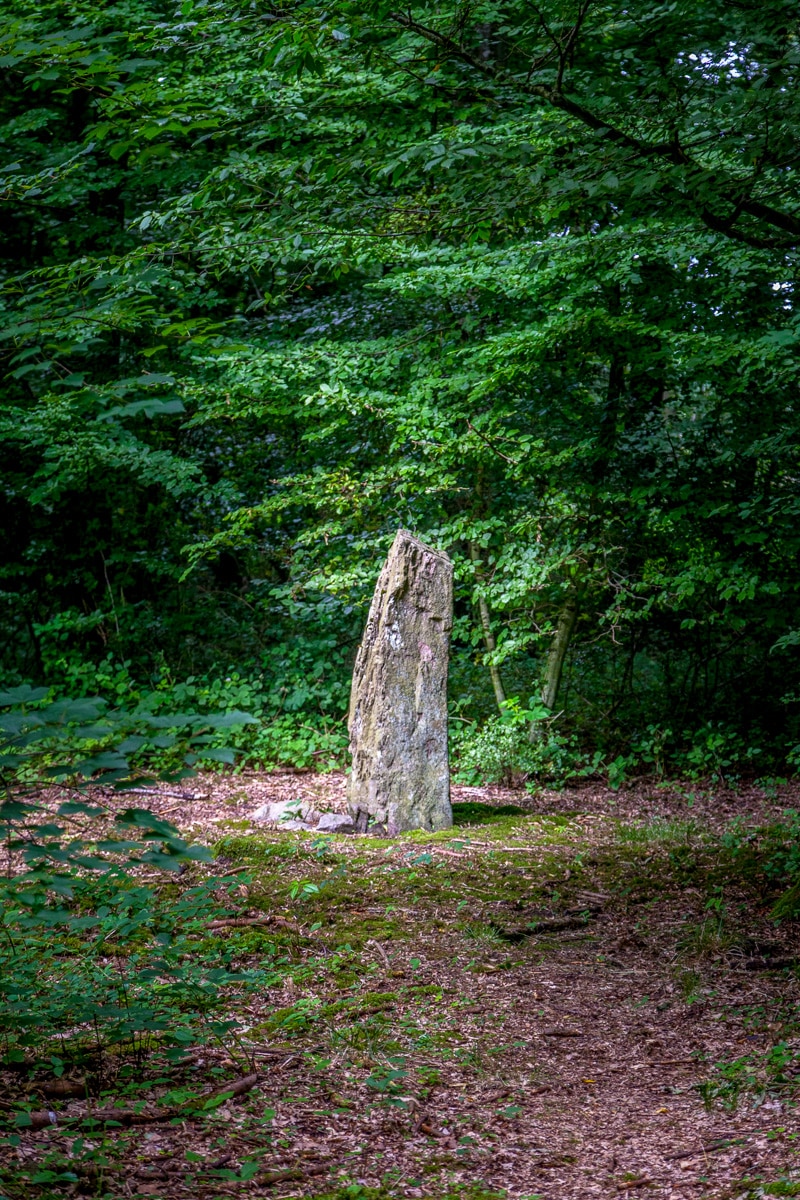 Our next destination was Gryet, an ancient site with one of Denmark’s largest collections of megaliths from the early Bronze Age and late Iron Age (2500-1100 BC). The upright stones stand among the trees in a small forest over graves where the remains of burnt bones are buried. Sixty-six stones are preserved, but it is estimated that originally there were many more. It was a wonderfully eerie place to wander.

Gamelborg Viking Fortress is located atop a hill in the Almindingen forest, one of the largest forests in Denmark. We first walked through part of the nearby Ekkodalen or Echo Valley, which is Denmark’s longest rift valley and possesses a great echo. Further along, we located the path to Gamelborg , the first fortress on Bornholm. Built around 750 AD, it was the seat of the kings of Bornholm during the Viking age and early Middle Ages, as well as a place of refuge for the island population during pirate raids and invasions. The fort was abandoned in 1150 and the occupants moved to Lilleborg, only 700 meters to the northwest. 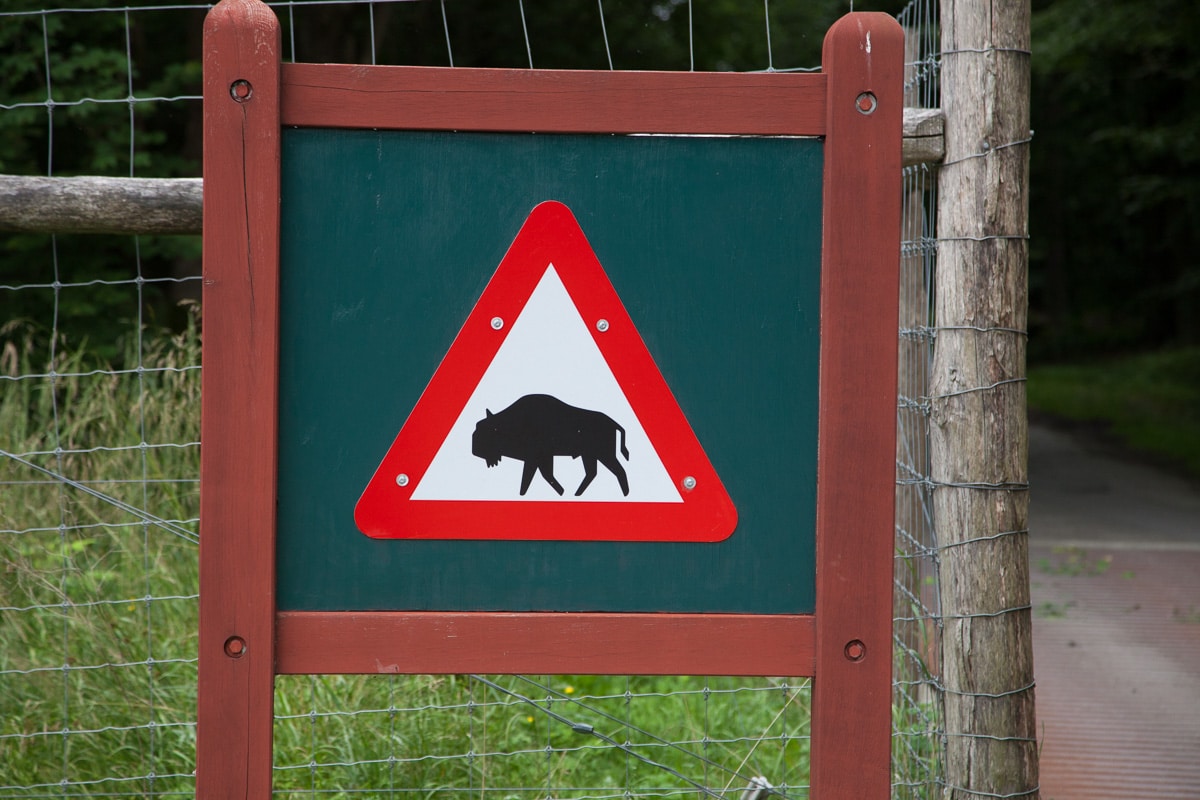 On the way to Lilleborg, we drove to a European Bison reserve. In 2012, Naturstyrelsen  – the Danish Nature Agency brought seven European bisons from a Polish primeval forest to a 200 acres (81 ha) paddock in Almindingen. This marked the first time in 2,500 years that Europe’s heaviest land-living mammals were in Denmark. The project was to reintroduce large grazers like bison to preserve and create a natural environment with many different habitats. Unfortunately, we didn’t see any bison. 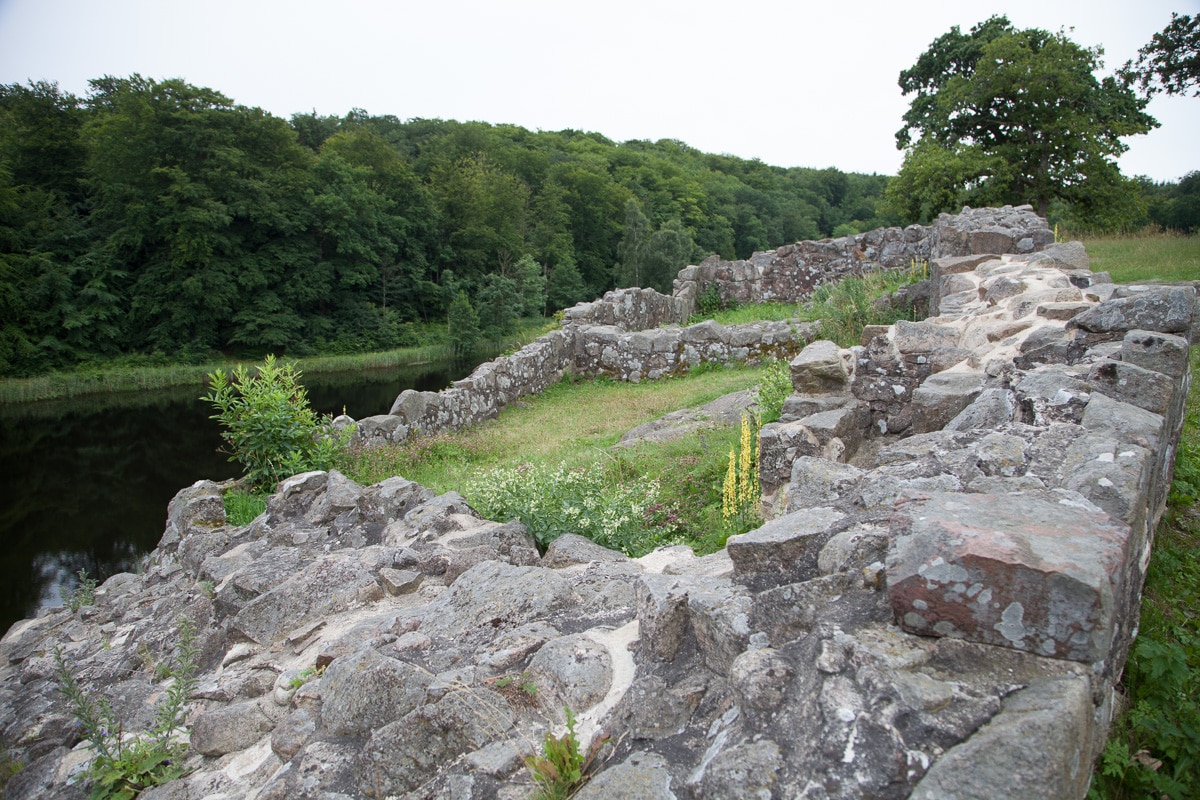 Our final stop was Lilleborg, the royal fortress that replaced the much larger fortress of Gamleborg. The move was likely motivated by political intrigue and power struggles. It was likely built no earlier than 1150 AD but was occupied for more than 150 years.

Retracing our route via ferry and automobile through Sweden, we returned to Copenhagen. Jeannie and I had arranged a beautiful apartment in a residential part of the city, and Niels and Jetta took us there. While the bulk of our luggage remained at their place, we would get it the next day. But for now it was good to be home and after a light dinner out we again slept soundly.