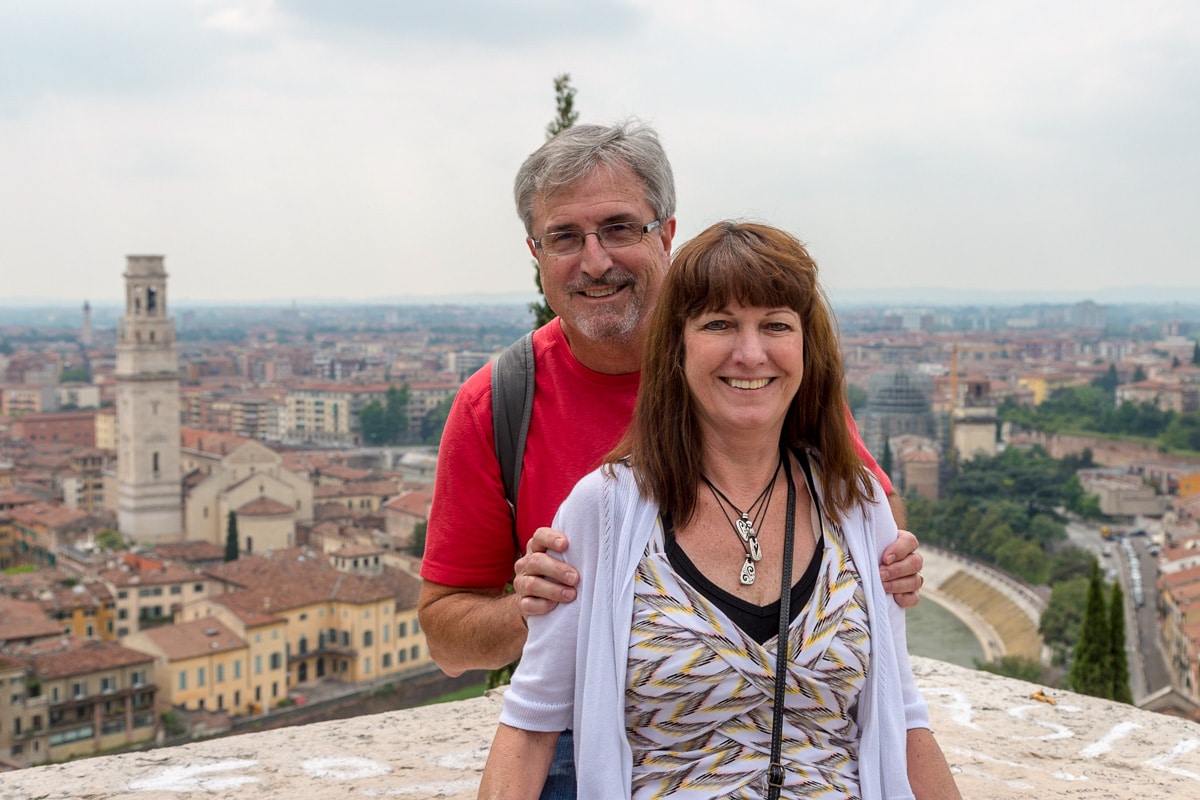 Well, even though he stopped being “little” many years ago, he is still my “little brother.” In any case, we were excited that Mike and his lovely wife Kathy, were coming to visit us again, this time in Verona.

Text-messaging back and forth up until they took off from Tampa, they let us know when they had made it to D.C. without problems. The next communication indicated they were in Paris, unfortunately, their connection from Paris to Milan was cancelled. What to do? Change flights and go to Venice, of course. should arrive in Verona about 1530-1600h (3:30-4:00 PM). 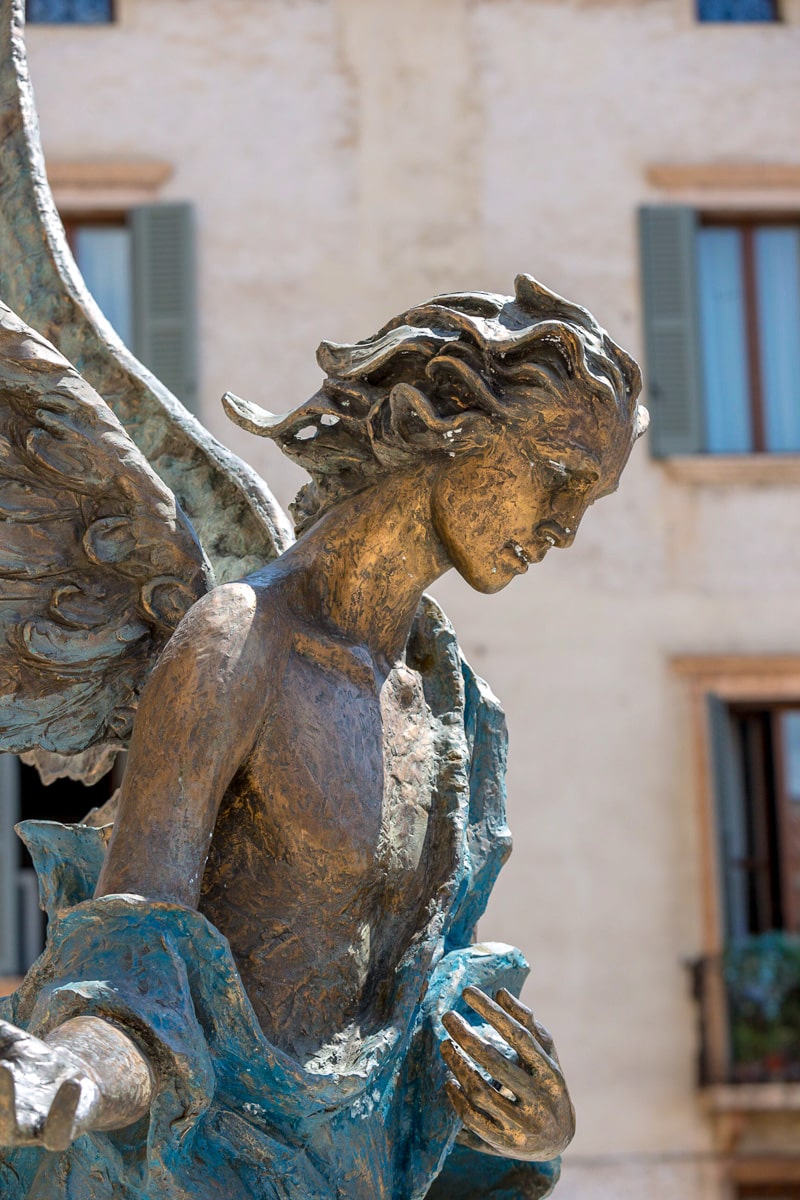 While at the train station, the next flurry of texts came in. They had purchased their train tickets – good. Then, unbeknownst to them, the departure platform had been changed, and they missed the train – not good. So, they caught the next available train – good. But it was the Regionale, the local train that stops at every town and village, and as they scrambled to recover, communication was sparse, and we assumed that they would smoothly transition from landing in Venice, to the train, to Verona. So, we walked to train station based on those assumptions, thinking that they’d takes about two hours – not so good. Finally, they did arrive, only about four hours later at around 1930h (7:30 PM) – finally, really good. 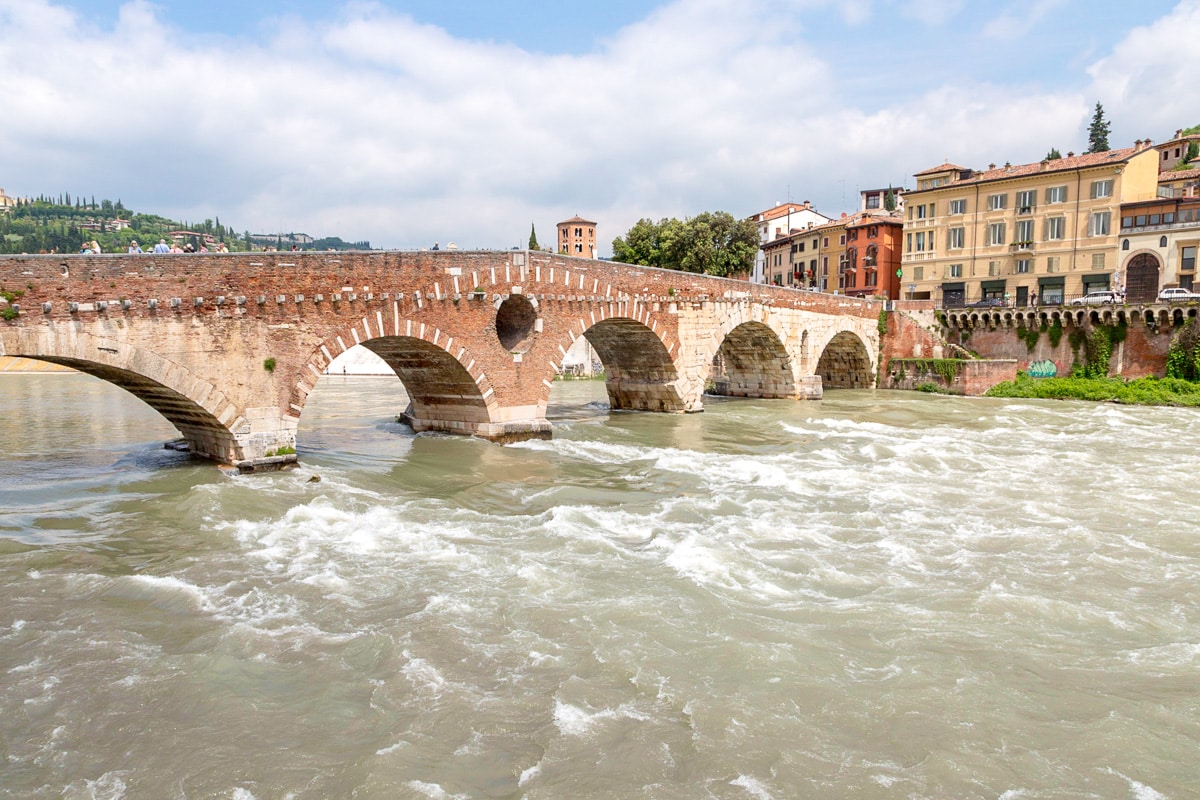 We greeted them on the platform with a bottle of wine, and then walked to their apartment just around the corner from ours. As I had met with the owner earlier, I had their keys, and after a quick tour of the apartment and a glass of wine, we all walked to Pizzeria Ristorante Olimpia, one of our favorite restaurants just a few blocks away. After pizzas and wine, we ended with lemoncello and walked home. We dropped them off at their front gate, asking them to text us in the morning, leaving them to a well-deserved nights rest. 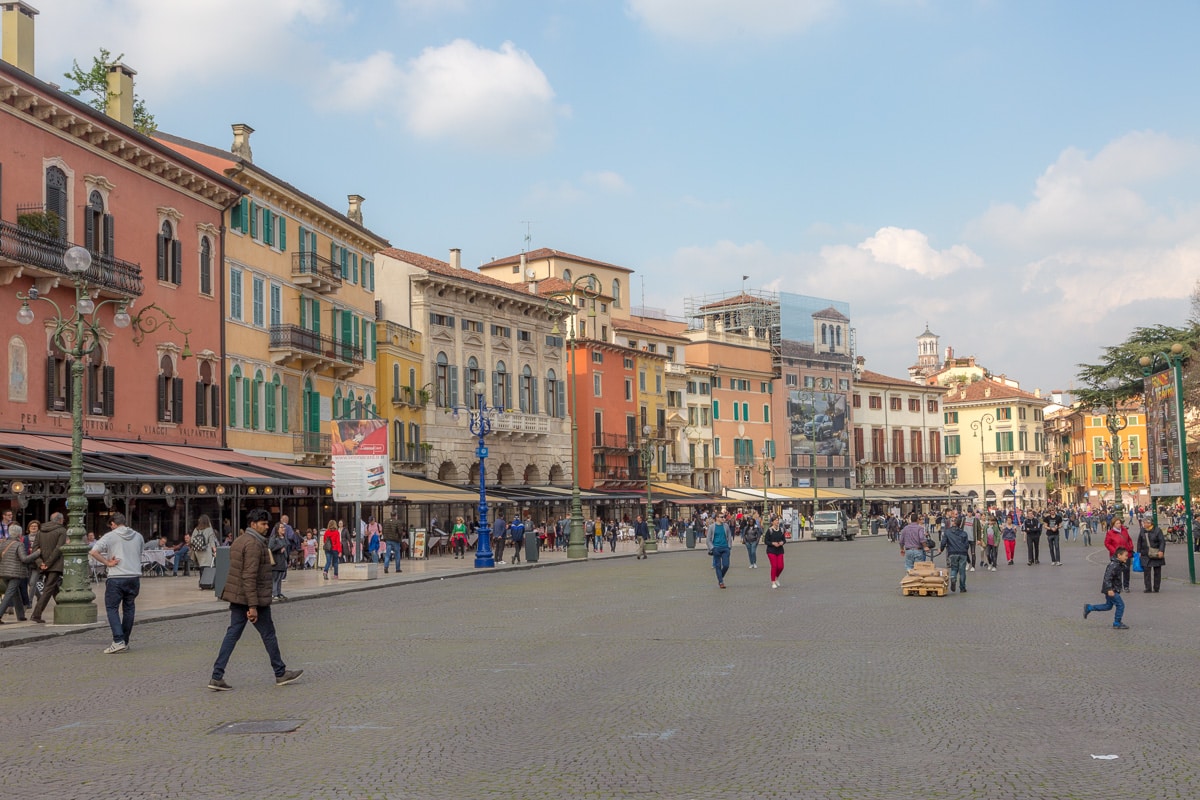 Over the next days we enjoyed a hodge-podge of walking, touring, eating, shopping, drinking, and eating some more. We wandered to many of the main “tourist” sights, Castel Veccio, Piazza Bra and the Roman Arena , up to Piazza Erbe, Piazza Signori, and dozens of back streets and small alleys. We walked around the San Zeno neighborhood and its lovely cathedral, and then over to the market at Arsenale. 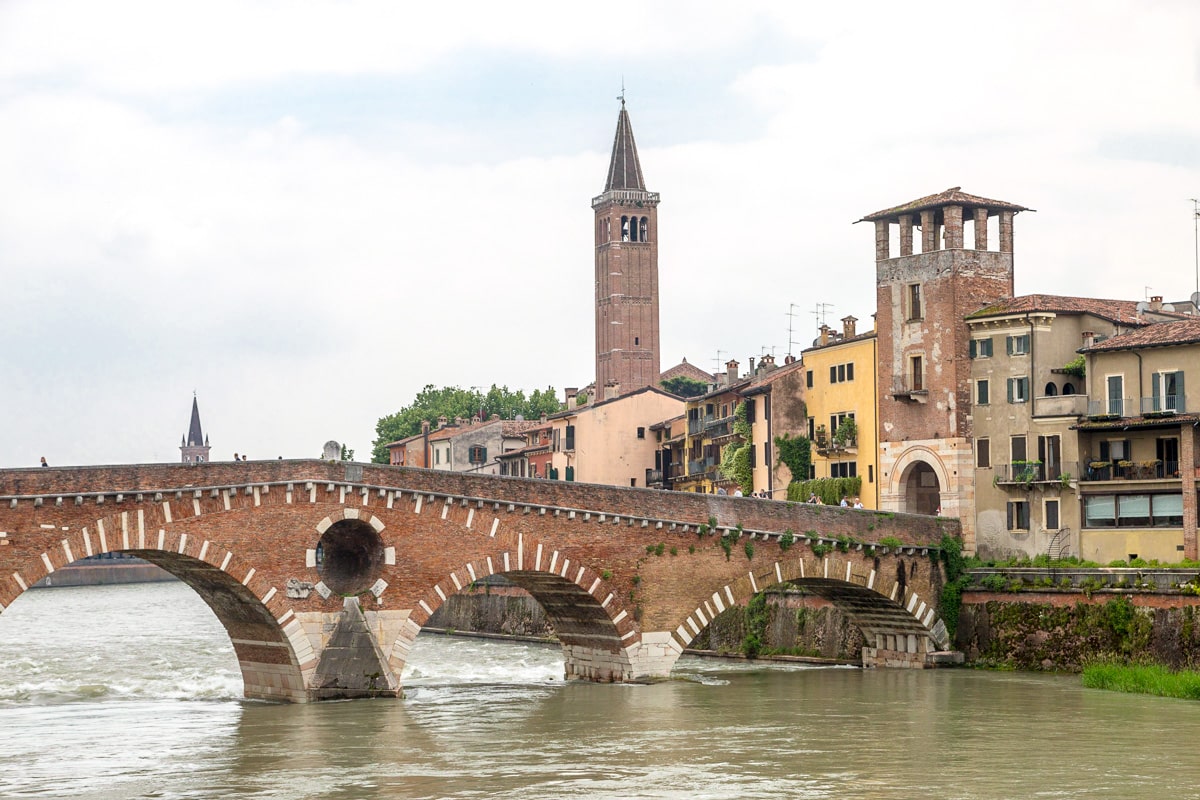 On one day, we had a picnic lunch at the wonderful deli Salumeria Gironda that overlooks the famous Ponte Pietro. Then later that evening, they came over to our apartment for some prosecco and small bites before we took off for another of our favorite little neighborhood restaurants – Angelucci’s.

The next day, we went out for a fabulous lunch at Parma Tavola, after which Mike and Kathy took off to explore Verona on their own. Later that evening, we once again we had dinner in our apartment with things we had purchased that day at a market. 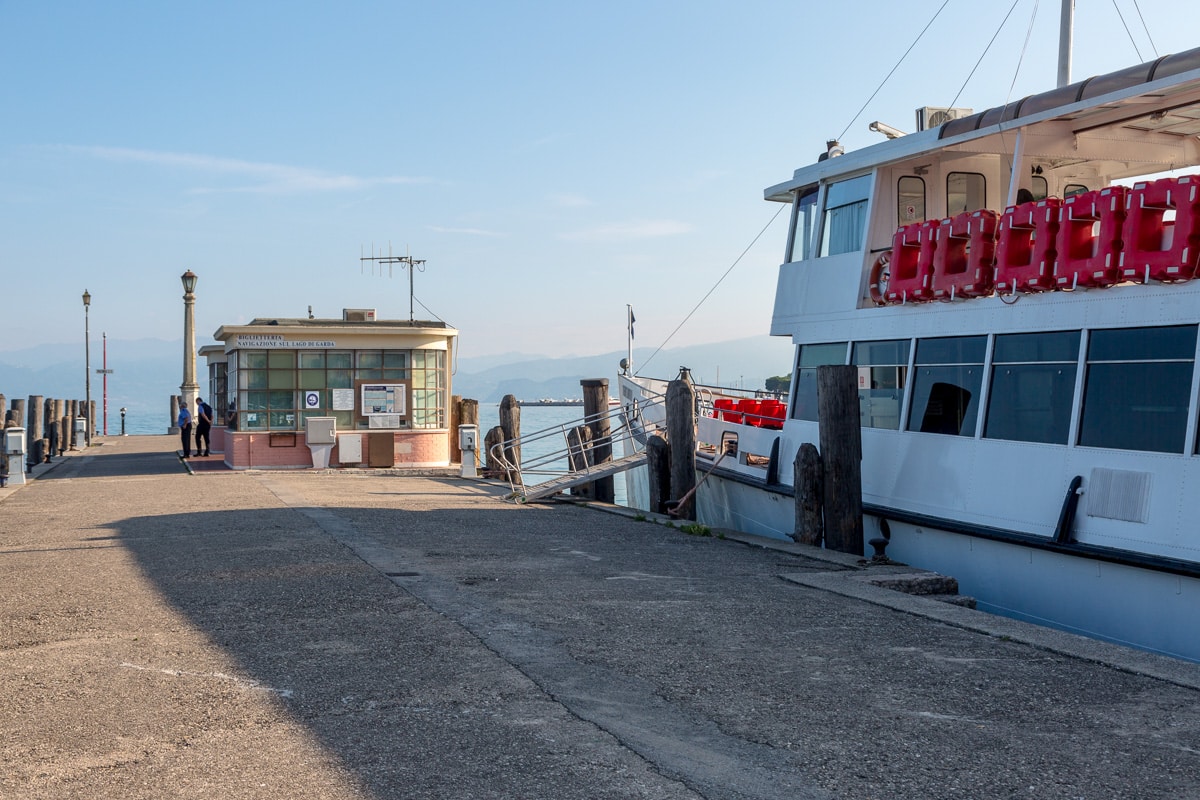 Over dinner, the discussion revolved around going on a road trip. Since Jeannie and I had been trying to get to the town of Sirmione, we all agreed that it would be a good destination. The travel would involve taking the train to Peschiera, a short walk to the ferry, and then the fast (hydrofoil) ferry to Sirmione. After that we could take the ferry again (this time the slower one) to Bardolino, famous for its wine, for lunch, and then take the bus back to Verona. 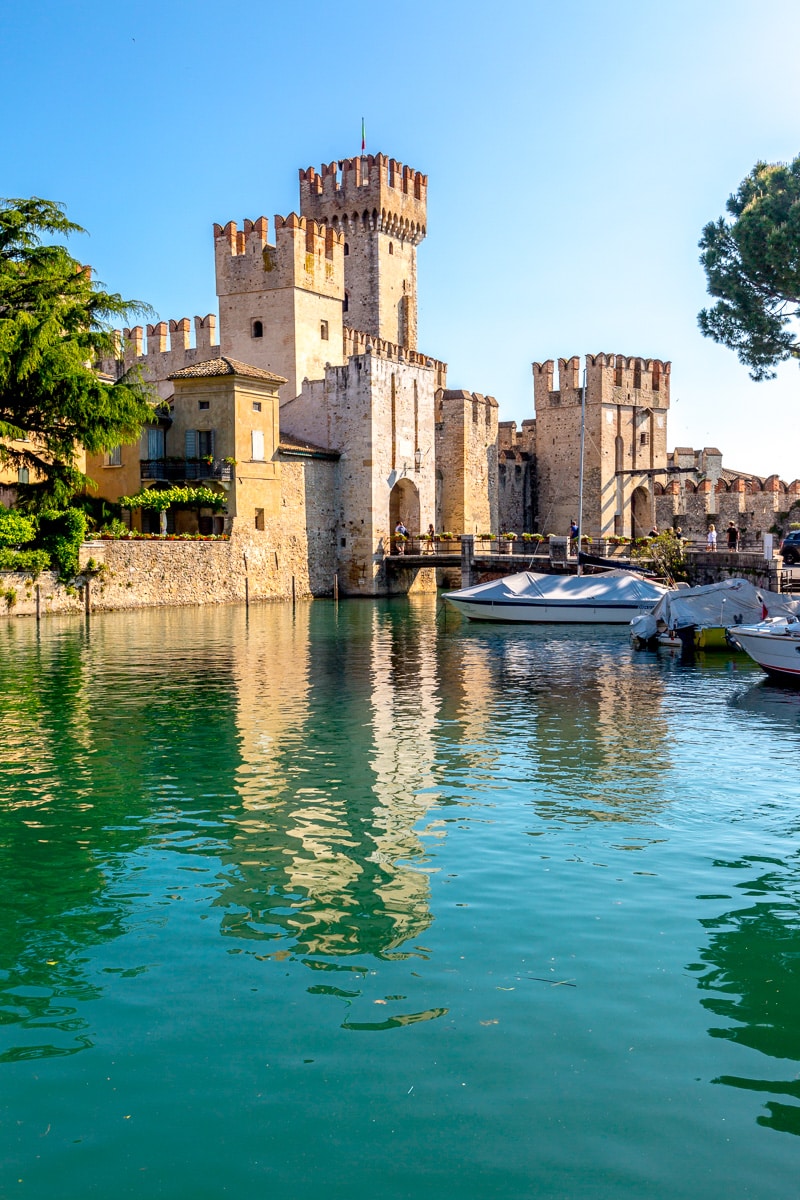 Departing early, it was a short train ride to Peschiera, and the hydrofoil to Sirmione was fast and smooth. We disembarked and began wandering just as the town was beginning to get moving. The deliveries were being made to shops and restaurants, and the clerks and early-risers were making their way to wherever it was they needed to be. We strolled.

Situated on the southern bank of Lake Garda at the tip of a peninsula extending into Lake Garda, Sirmione is a  known for its thermal baths and the Rocca Scaligera, a 13th century medieval castle overlooking the lake. It is also the archaeological site of Grotte di Catullo, once a grand Roman villa, a museum and lots of olive trees. 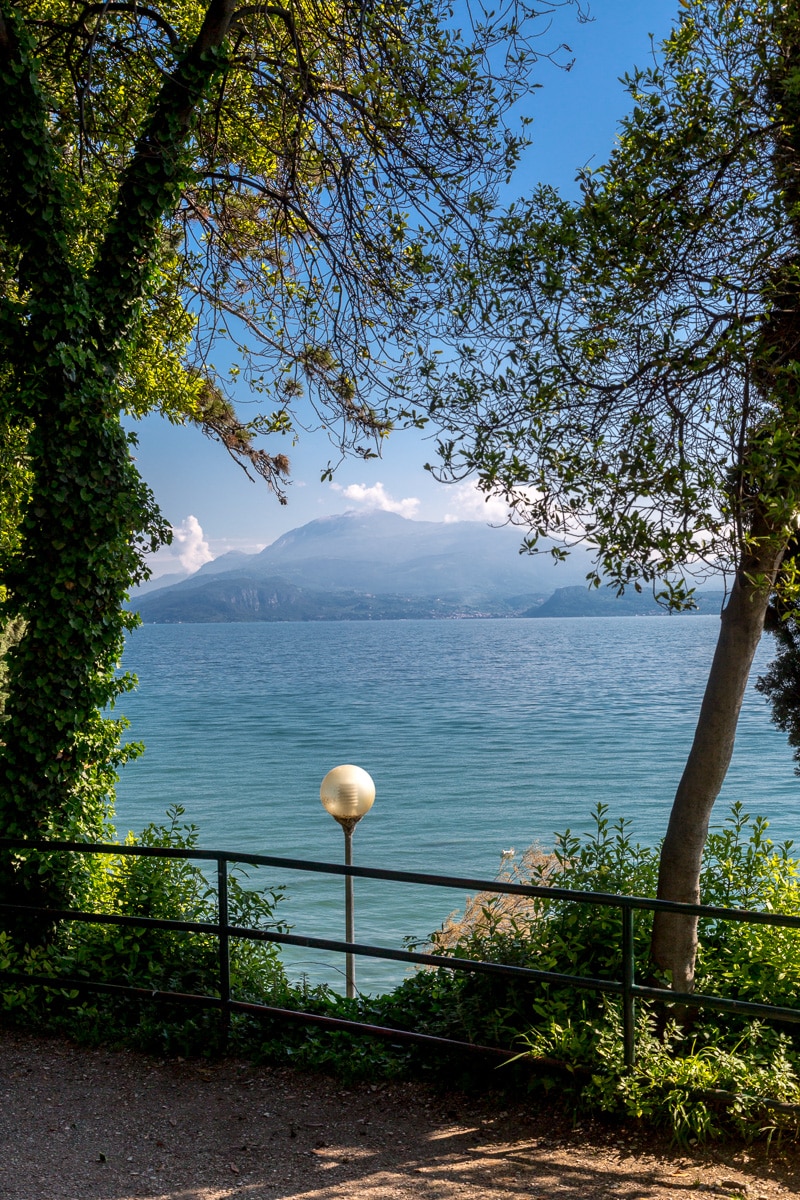 The castle, Rocca Scaligera, built as part of a defensive network surrounding Verona, is completely surrounded by canals and moats that connect to the lake. Its position on a peninsula made it strategic for the control of the lake until the XVI century. With numerous towers and its crenellated walls, access was only possible through two drawbridges. Nowadays, the pleasure craft and boat tours, along with the hordes of tourists don’t pose the same challenges, and the town welcomes its invaders with open arms. 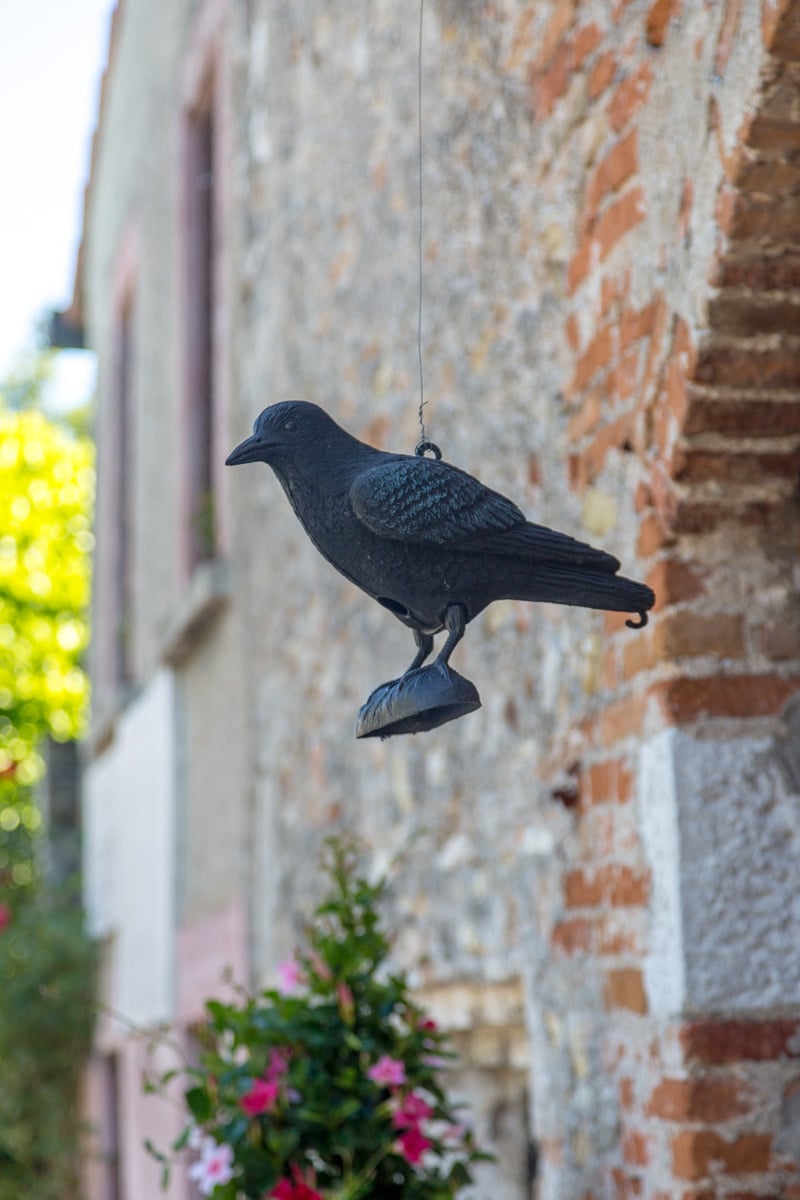 After storming the castle, we wandered around the harbor and through the beautiful old town, before making our way to the tip of the peninsula, stopping for a spell at the church of San Pietro in Mavino, built in Lombard times (A.D. 765) but renovated in the early 14th century. A curious replica of a crow was hanging just at the front entrance of the church. We were informed that it was there to discourage “le rondini” or the swallows from entering and building nests.

We reached the end of the peninsula near the Grotte di Catullo which is neither a grotto, nor did the Roman poet Catullus ever live there. Though we are told that it was once a villa from around 150AD, for a rich Roman family. 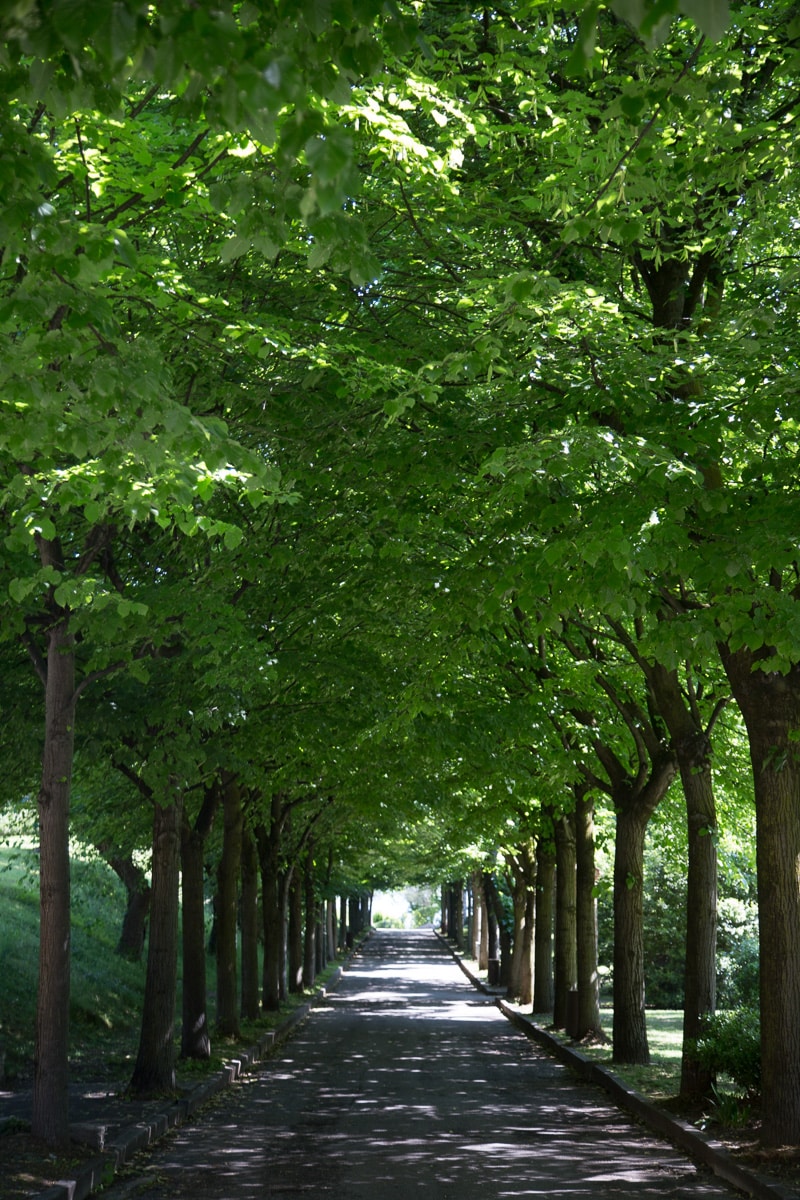 However, the time for the departure was closing in, so we followed the road high above the lake back toward the harbor. We passed by many olive trees in bloom, in preparation for this season’s fruits. As we drew closer to town, we also passed by a villa once owned by operatic legend Maria Callas (1923-1977).

It was about time to leave Sirmione, and we all noticed that, from the time we had arrived in the morning until now – almost noon, the small town was becoming uncomfortably crowded.  Our tickets in hand, we had just enough time to get a drink and a snack before boarding the ferry to Bardolino. 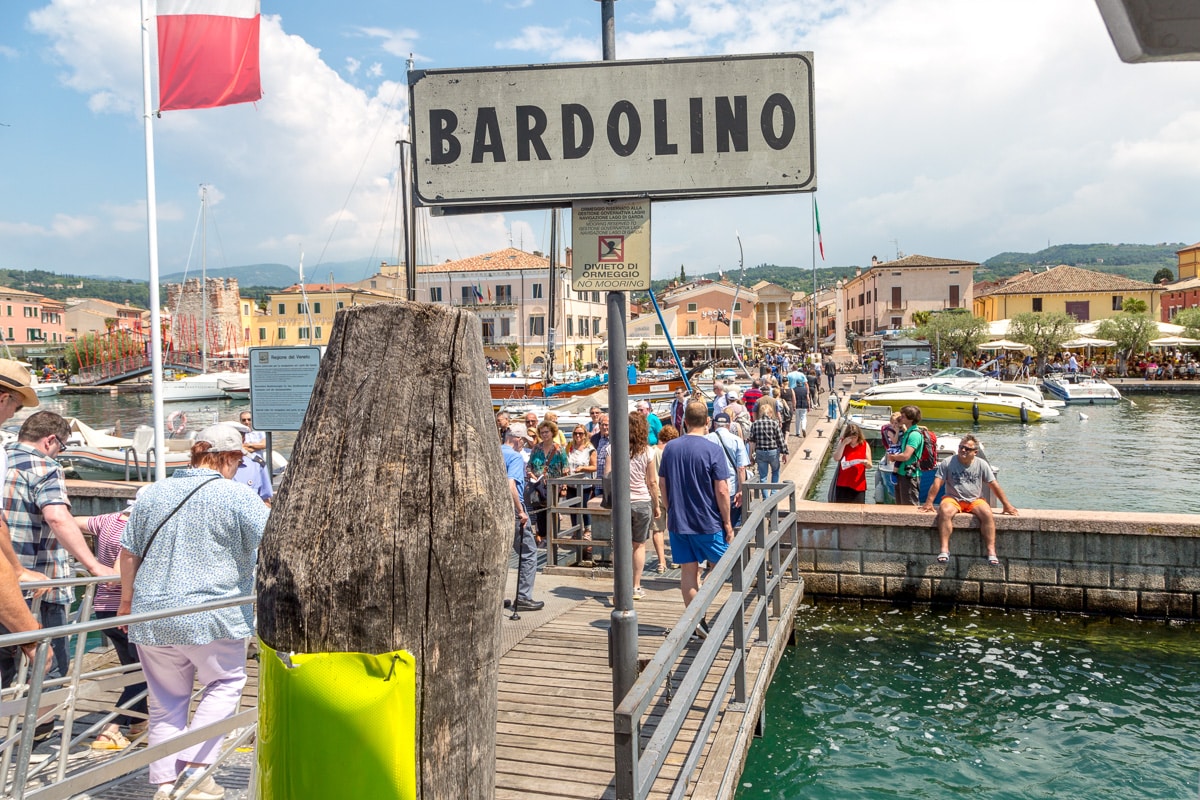 The ferry was full as we crossed the lake, first to Cisano, then on to Bardolino – only a little further up the coast. As the colorful little town of Bardolino came into view, we could see the crowd standing on the wharf waiting to board. We went ashore, making our way past all the colorful fishing boats floating, tied up in the clear waters of the small harbor. 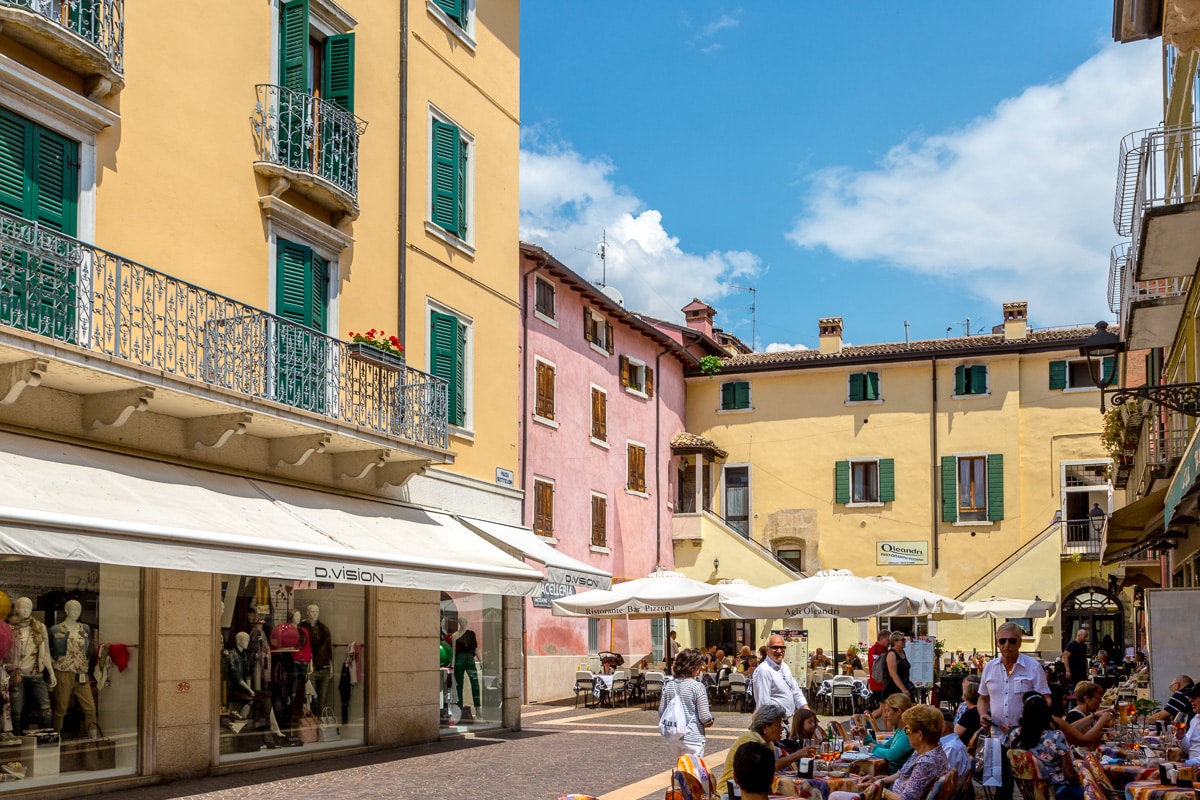 The town appeared every bit as charming from the inside as it did from the water, at least once you got past the dozens of shops selling the same trinkets, tea towels, and t-shirts as the next.

We had a wonderful, late-lunch together at Osteria Due Nani on the advice of a friendly shopkeeper. With a beautiful rustic interior and delicious food, the name of the restaurant comes from the two brothers, the managers, being called by the locals “il nani” or “the dwarfs”, or that is to say the “little boys” of Giovanni (their father). When we say it was a late lunch, we indeed were the last to leave, and yet they were warm hosts until the end. 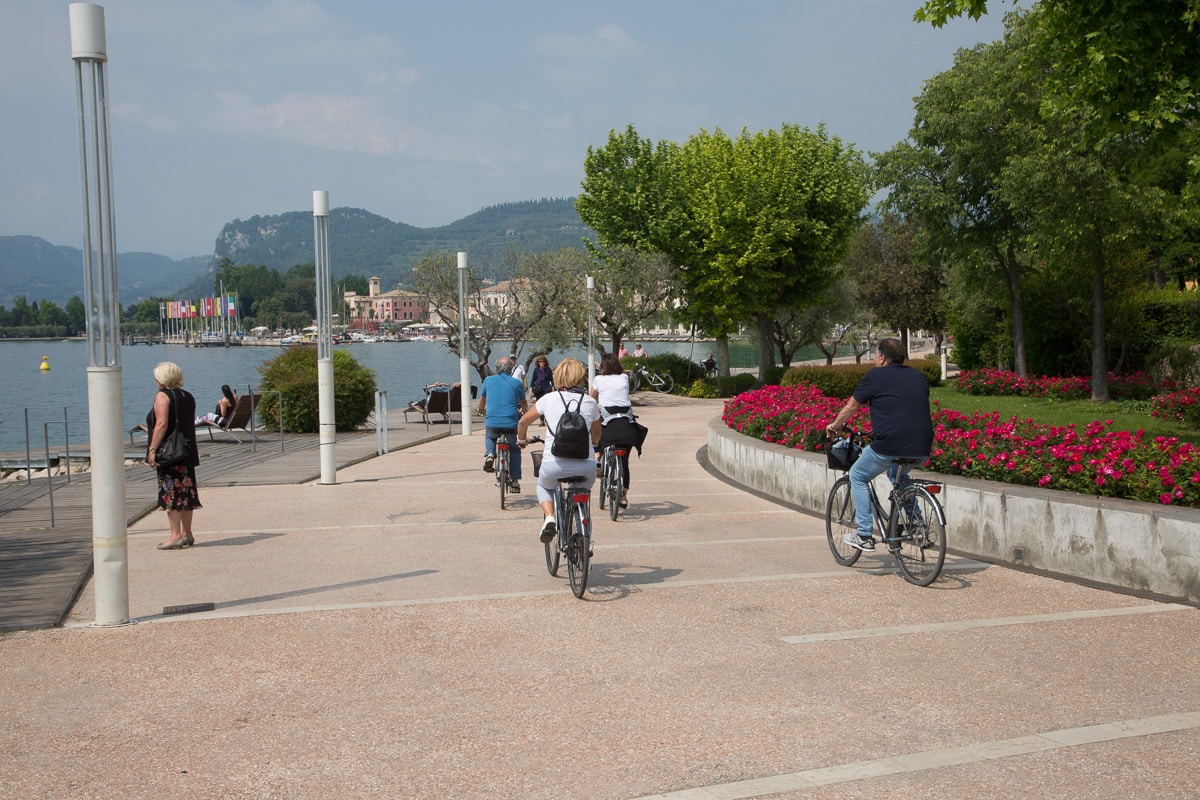 Later, we took off through the little back streets, into the quiet areas, and eventually found our way back along the lake. Strolling the promenade along the lake, the day was warm and before long, thoughts of gelato appeared in everyone’s mind. So, back into town we went.

Our gelati in hand, Mike and Kathy took off in one direction while Jeannie and I found a little playground where neighbors meet to watch their children and/or grand-children play, where the real heart of the community beats. It was a wonderful place to sit back and just watch as we enjoyed our dessert. 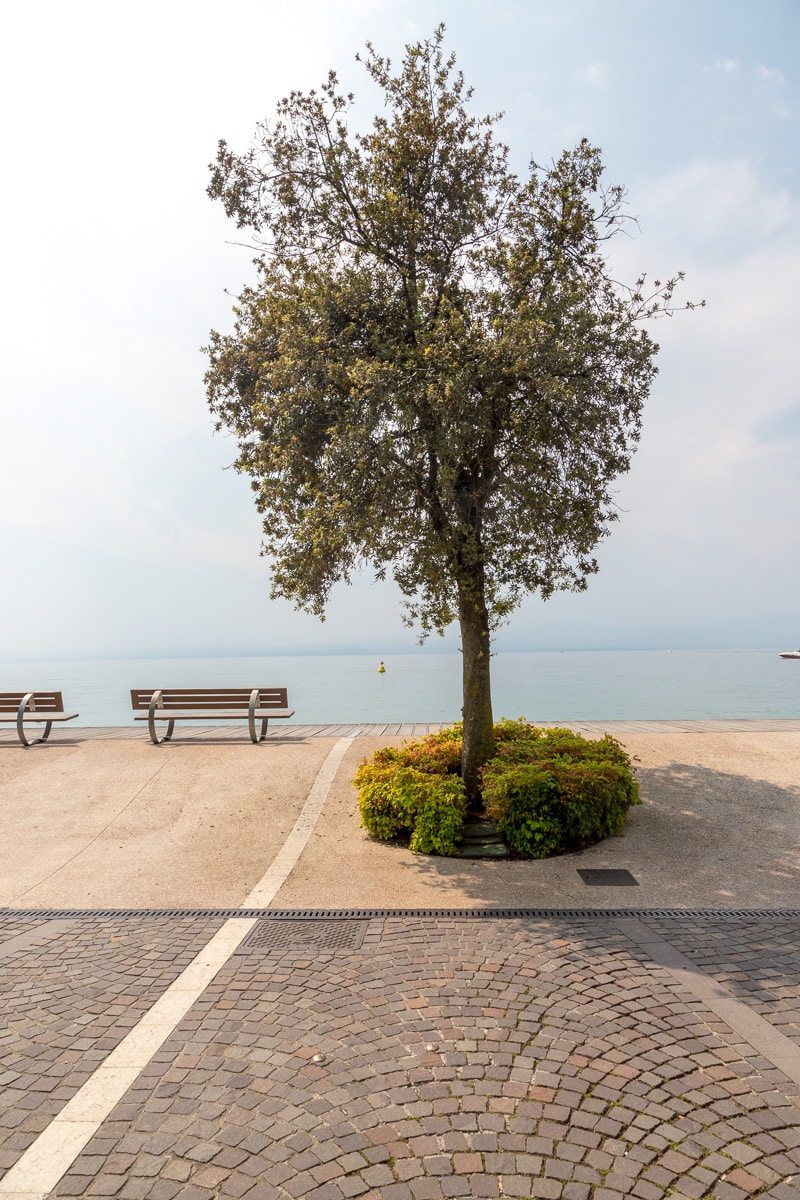 We met back up shortly thereafter, and the girls wanted to do some more shopping, so my brother and I found a waterfront bar where we could watch the world, as well as the Giro d’Italia on TV. It was good to spend time together.

As we watched, Mike and I both noticed a familiar fragrance in the air. We looked at each other and both thought … rain. We were under the large awning of the bar, and as the rain gradually increased from a light drizzle to a heavy shower, the pedestrian traffic grew lighter until the heavy downpour chased everyone under cover. 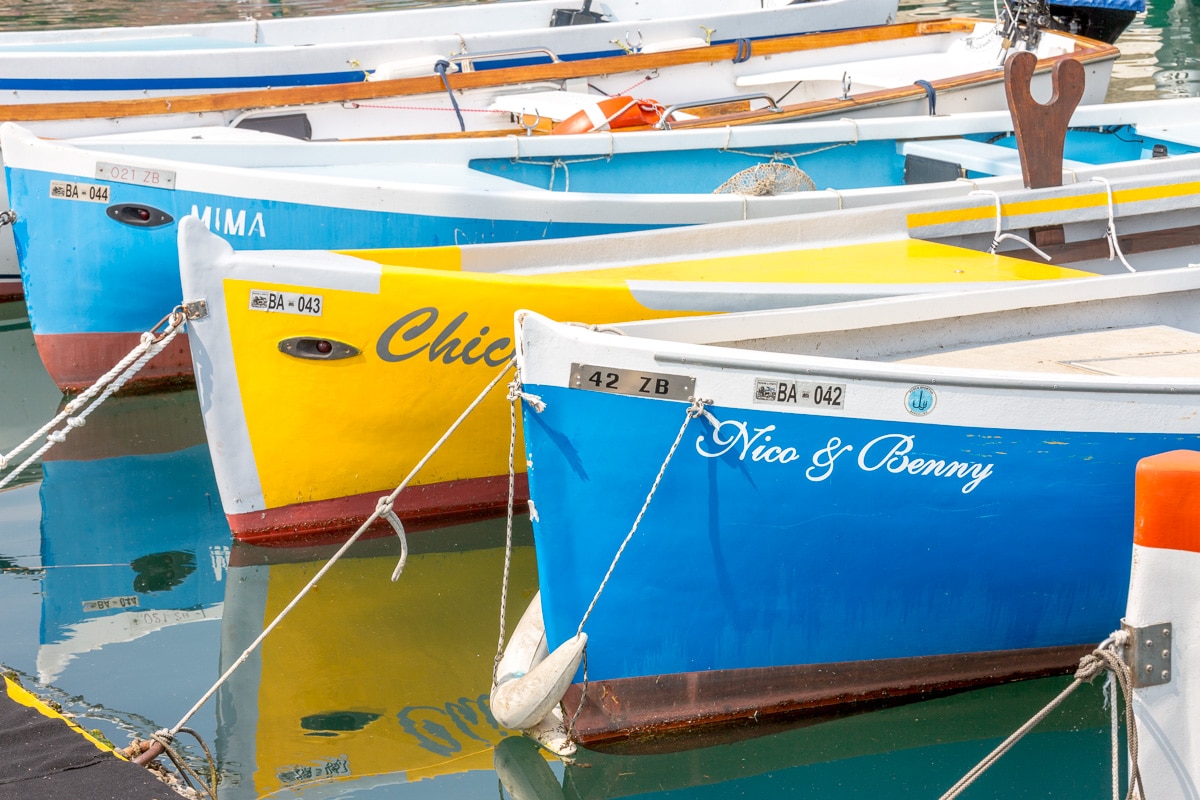 Jeannie and Kathy found shelter somewhere, we were sure, then the rain ended and the sun emerged just at the time we needed to meet them to catch the bus back to Verona. Unfortunately, the bus was running behind schedule and the sun was making it hot. The bus, when it finally arrived was packed, and Friday afternoon traffic snarled our return back to Verona.

Even so, in spite of the rain, crowds, and traffic, it had been a delightful day shared with two great friends.