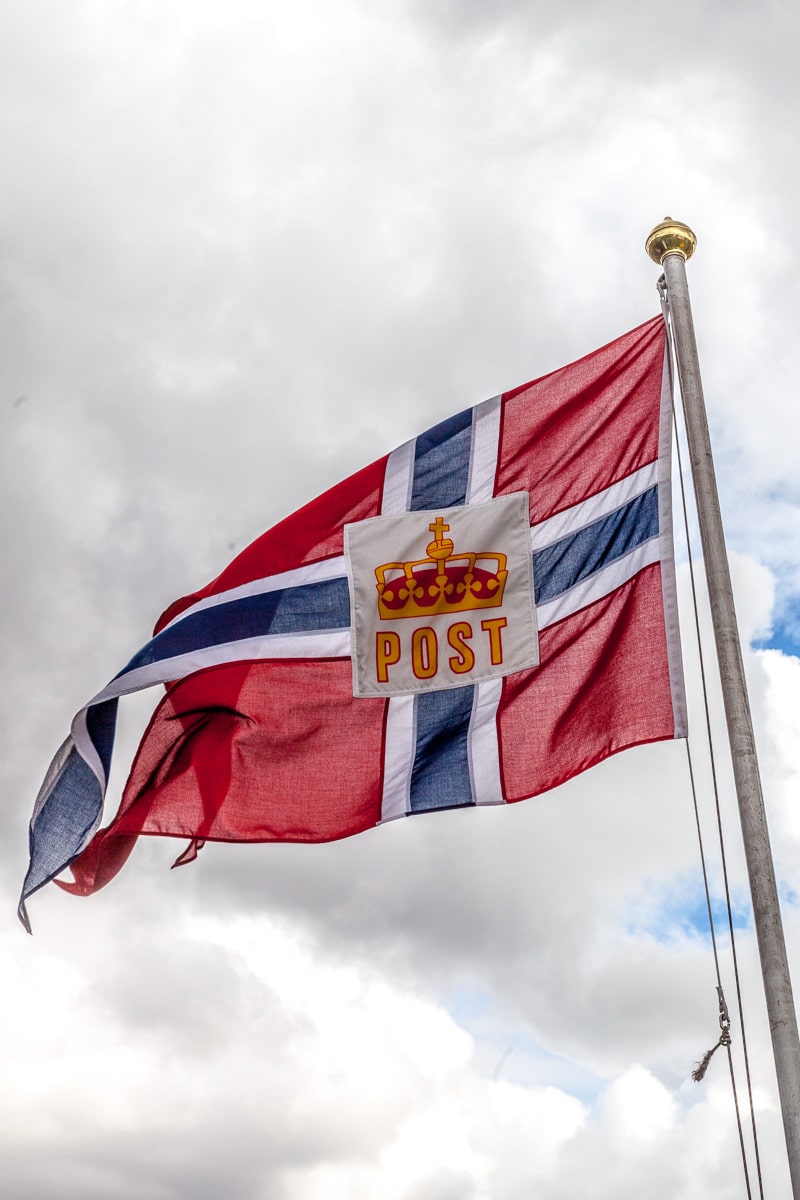 On many cruises, there is only water all around until you arrive in a port and see land. But on Hurtigruten (‘Hurtig’ = express, ‘ruten’ = route), a Norwegian cruise, ferry, mail and cargo operator, the passage is through the outer islands and fjords of western Norway. It was founded in 1893 to improve communications along Norway’s long, jagged coastline. In earlier times, it could take up to three weeks in the summer or five months in the winter to send a letter the 980 km (609.14 mi) from Trondheim to Hammerfest. The coastal express reduced this time to a few days.

While Hurtigruten still serves important passenger and cargo needs and operates 365 days a year its primary focus is now tourism. For good reason, it has been described as the “World’s Most Beautiful Sea Voyage”. Hurtigruten continues to serve many of the coastal towns and villages, it is still frequently used as transportation. Over seven days, it stops at 34 ports, some only briefly, but we were only on board for two nights to Trondheim. 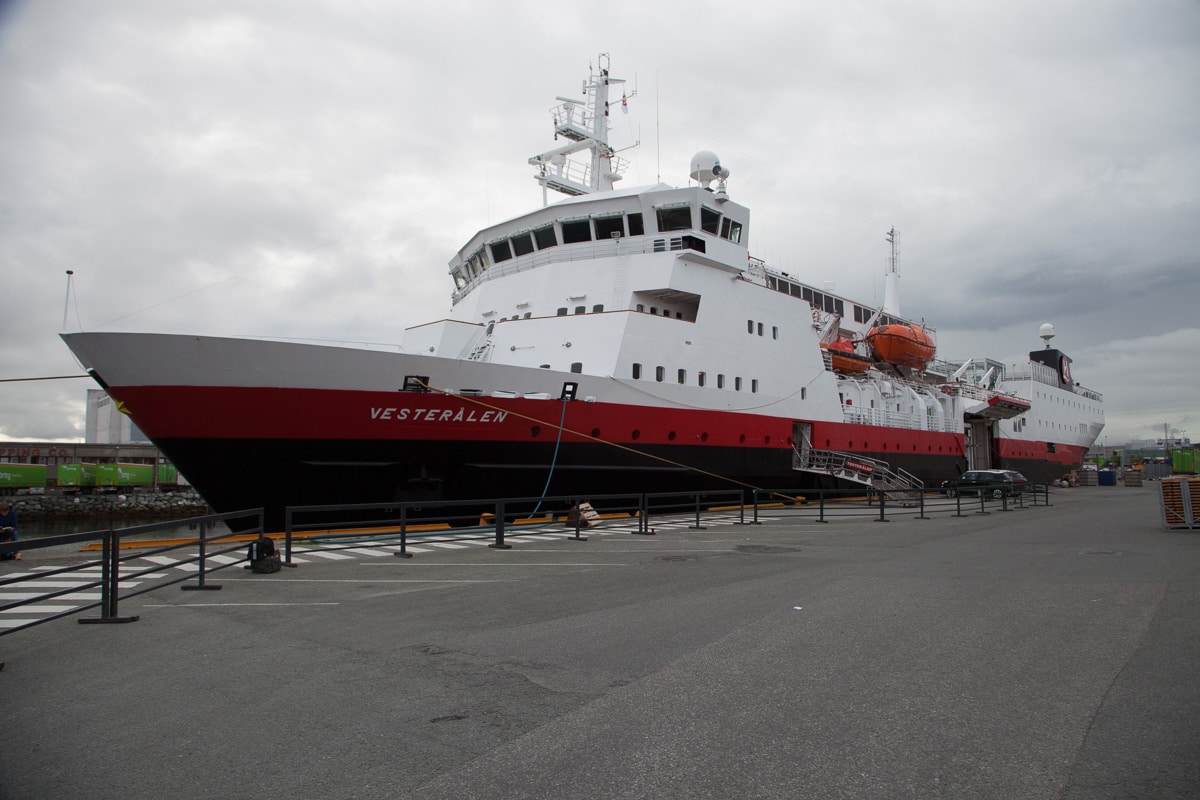 When we boarded the MS Vesterålen in Bergen prior to the 2000 (8:00 pm) departure, the check-in was easy and we found our way to our compact yet cozy cabin. One of the oldest (1983) and smallest in the Hurtigruten fleet (the passenger capacity is just over 500), our ship had character with a real sense of charm and traditional ambience. There was only a small cafe and one restaurant with buffet breakfast and lunch, and then a casual, sit down dinner. The food was very good with a wide variety of local and Norwegian cuisine.

During the night, the ship stopped at several small ports for passengers and to load and unload cargo. Each of the stops was relatively quiet, and we returned to sleep easily.

The next morning we arrived in Ålesund just before 0900 (9:00 am) , and had 45 minutes to roam while the crew loaded and unloaded vehicles and cargo. Destroyed by fire in 1904, the city was rebuilt in Jugendstil or art nouveau style. The unique architecture lines the narrow cobbled streets that meander down to the winding canal that runs through the town. Unfortunately, there was only sufficient time for a brief stroll around the town that is home-base for Norway’s largest cod-fishing fleet. 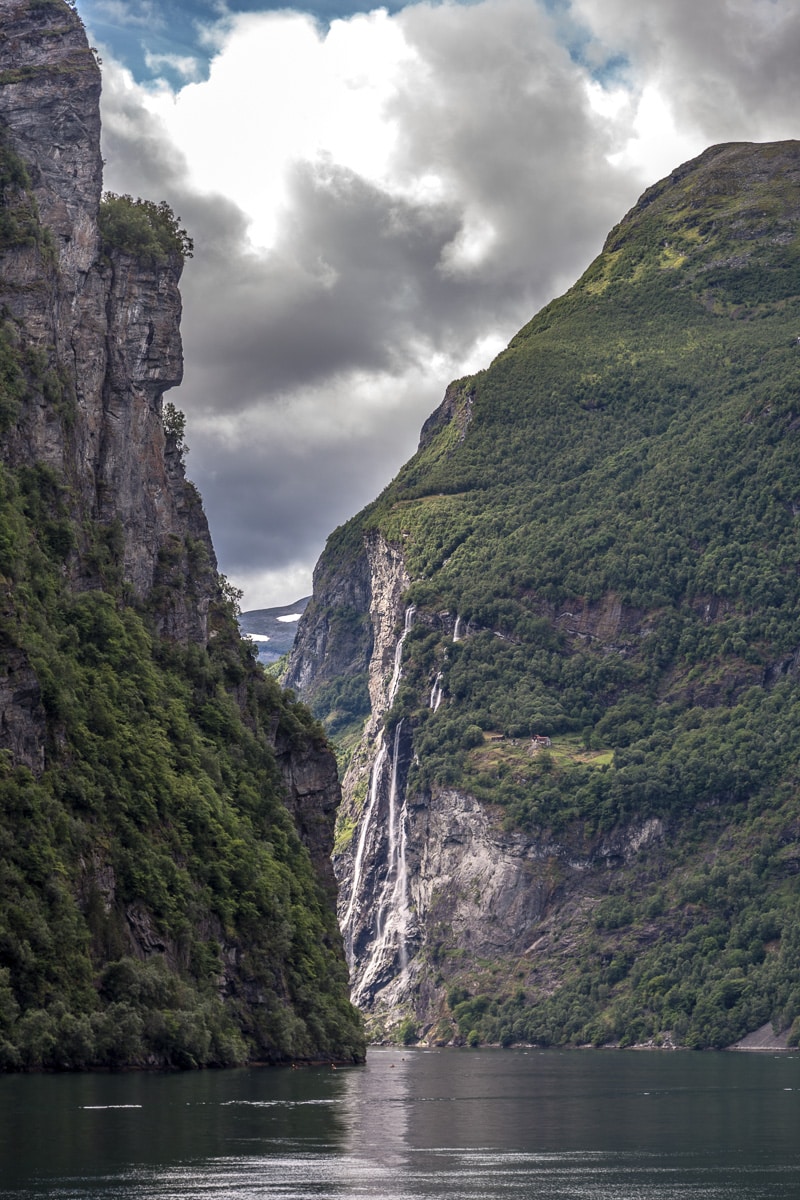 From Ålesund, our ship headed into the spectacular UNESCO-listed Geirangerfjord, a 15 k (9.3 mi) -long fjord that ends at the small village of Geiranger.

Geirangerfjord’s dramatic beauty is in its narrow and steep-sided rock walls that rise up 1400 m (4600 ft) and extend down almost 500 m (1600 ft) below sea level. It’s ranked among the most magnificent fjord landscapes in the world. An uncountable number of waterfalls drop into the fjord, while numerous rivers cascade from the surrounding mountains, glaciers and lakes, spilling through dense forests and down into the fjord. One of the more spectacular waterfalls, named “The Seven Sisters,” consists of seven separate streams that drop into the fjord from a height of 250 m (800 ft). During our short time aboard, we were constantly amazed at the dramatic landscape that we passed.

After the Vesterålen returned back in Ålesund for a short stop about 1900 (7:00 pm), we continued up the coast toward our destination, Trondheim. 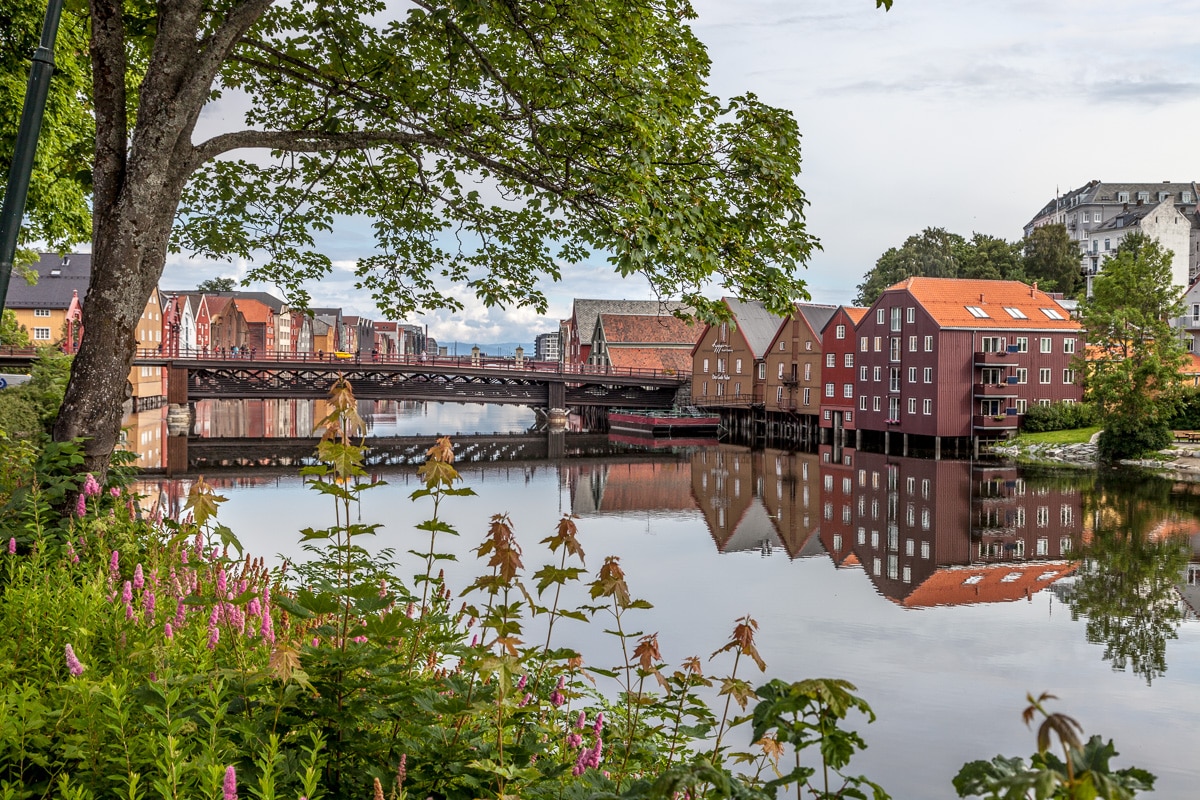 The following morning, we awakened early in anticipation of the 0615 (6:15 am) docking, and were able to grab a quick breakfast before disembarking for our overnight in Trondheim. After our departure, the Vesterålen continued northward for four more days to arrive in Kirkenes before turning around for the return voyage to Bergen to start all over again.

Trondheim is the third largest city in the country, with a metropolitan population of over a quarter-million inhabitants. Founded in 997, Trondheim (formerly Nidaros, until the Middle Ages) was the epicentre of Viking culture, and served as Norway’s capital from 1030 to 1217. 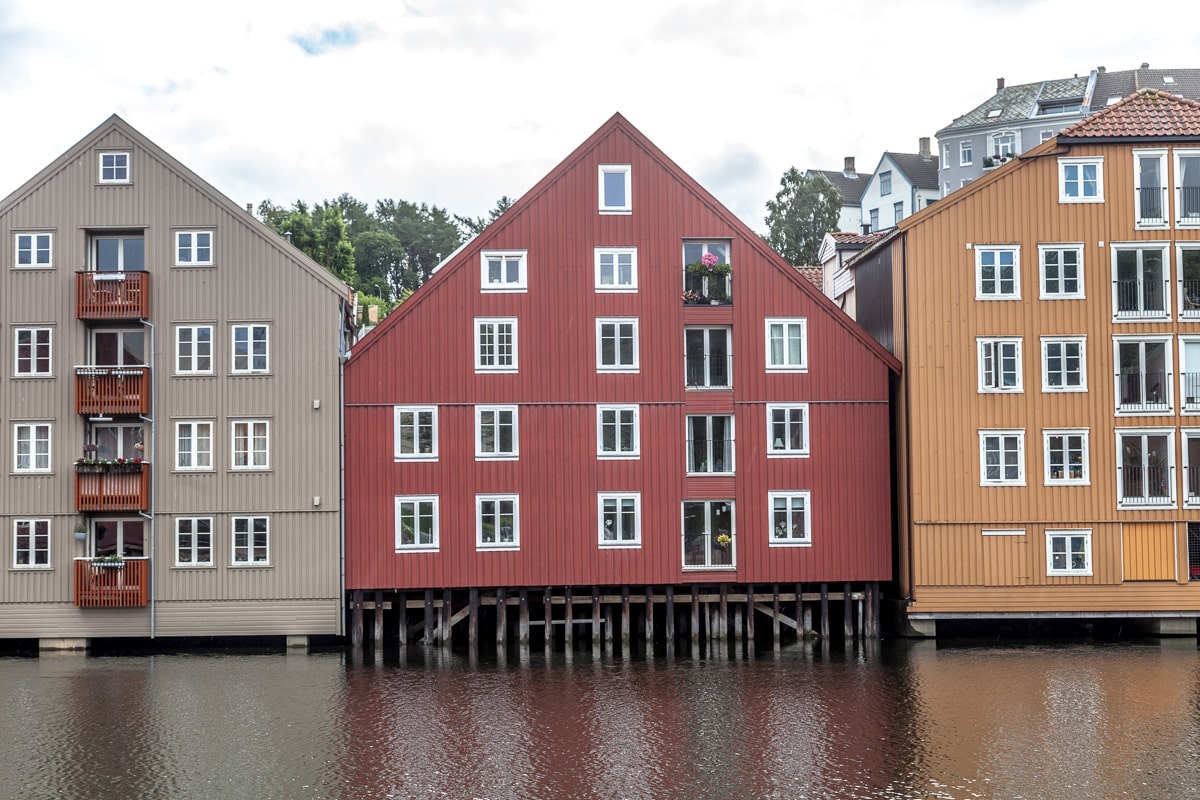 Since our arrival was well before check-in time, we stored our luggage at the Nordic Choice Hotel Bakeriet in Trondheim’s charming older district. Then it was time to explore. With such a long history, there are many  things to see and do in this city. Trondheim is an easy city to walk, and being quite bike-friendly as well, it is quite pedestrian-friendly, too. 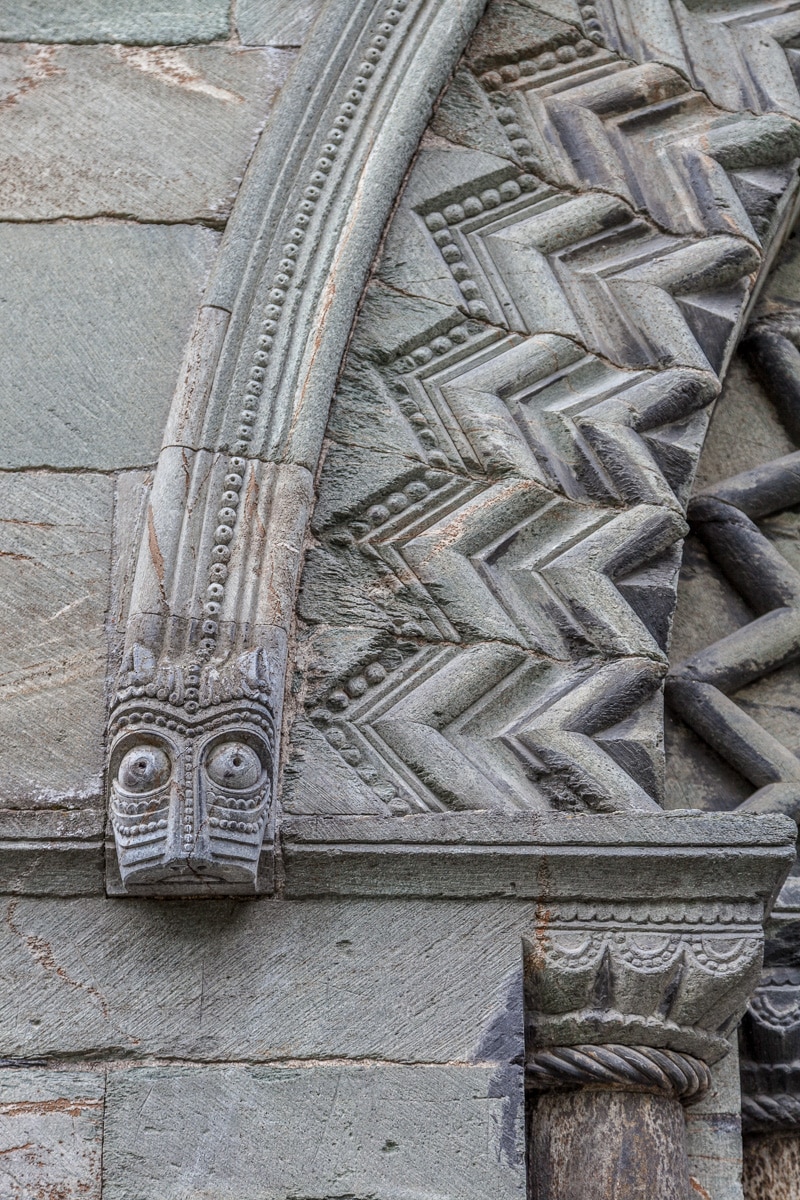 One of the most important places to visit is the Nidarosdomen Cathedral the northernmost Gothic cathedral in Europe. It was built nearly 1000 years ago on the burial site of Saint Olav, an early Viking king of Norway and patron saint of the country. Although destroyed or damaged several times over the centuries, it has been faithfully restored. 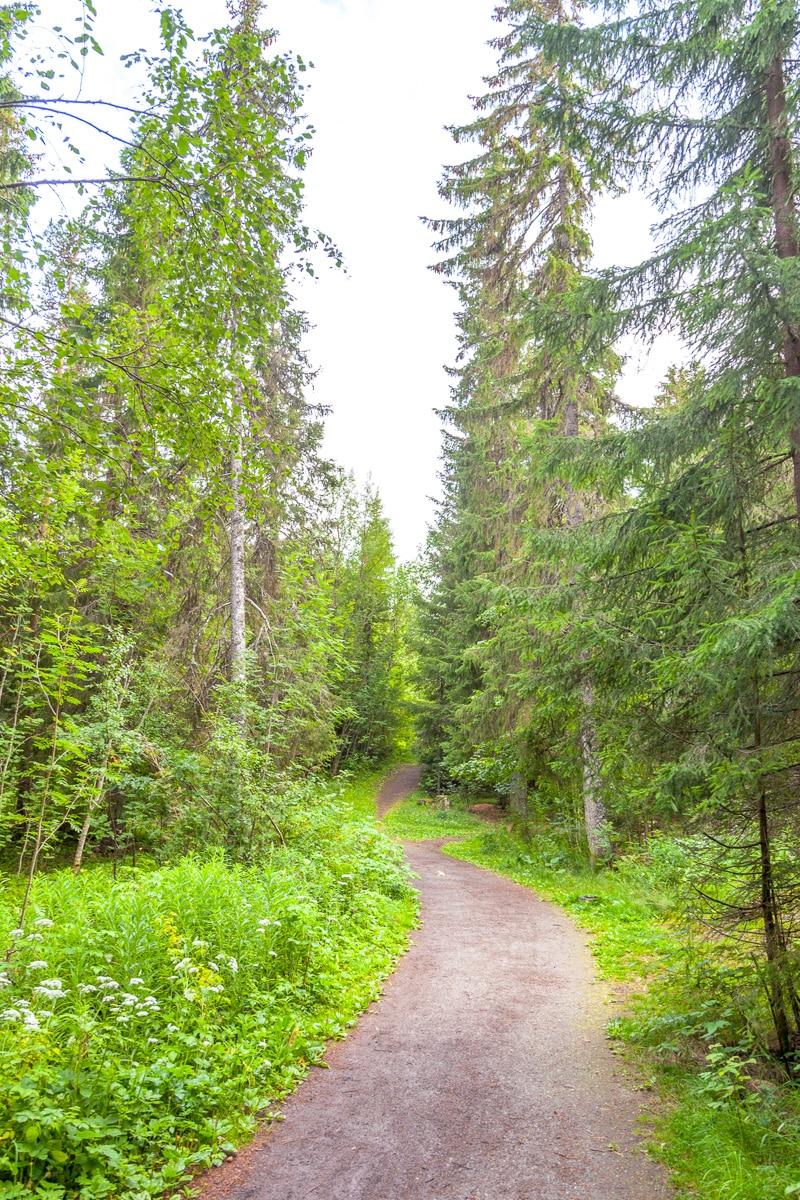 The need to get into nature or friluftsliv, (literally translated as ‘free air life’) took us on a 30-minute tram out of the city. The end of the line was at the edge of the Bymarka an 80 km² (30 mi²) city forest containing lakes, bogs, and over 200 km (125 mi) of marked trails. During the winter, most of the trails are used for cross-country skiing, and many are floodlit. For a couple of hours we enjoyed a warm-ish summer walk around a scenic lake in the beauty of the Norwegian woods. 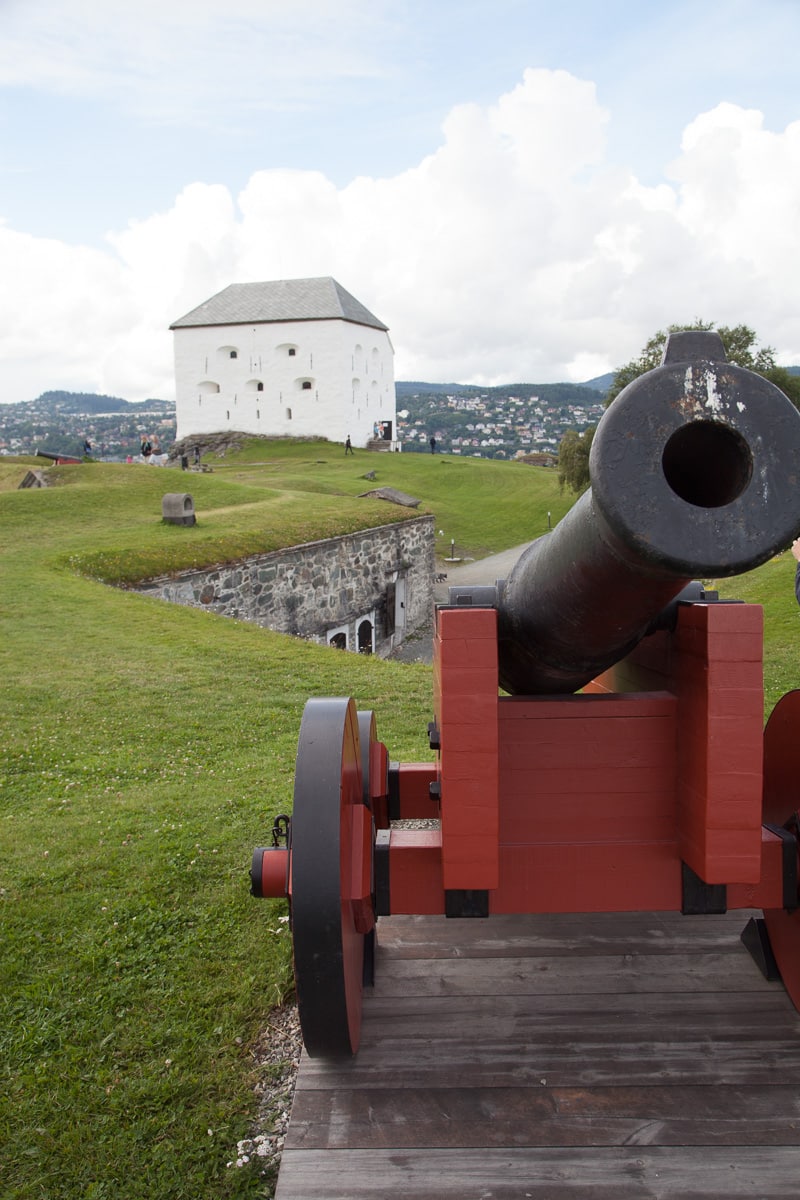 Back in town, the Bakklandet neighborhood is a very picturesque part of the city. Cobblestone streets are lined with colorful old wooden buildings that have escaped destruction over the years; many are old warehouses that have been converted into homes, shops, and restaurants. A little longer walk out took us to the Kristiansten Fortress. Built after a fire in 1681 to protect the city against attack from the east, especially from the Swedes, its high perch provides beautiful panoramic views over Trondheim.

A little longer walk out took us to the Kristiansten Fortress. Built after a fire in 1681 to protect the city against attack from the east, especially from the Swedes, its high perch provides beautiful panoramic views over Trondheim.

Over the last four days we saw and experienced so very much. We met a number of other travelers while on the Vesterålen and while in Trondheim.  We’ve always said that you can’t see everything, but before we departed for the airport and our return to Bergen, we had given it a good effort.