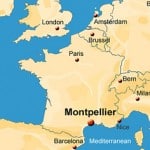 Jeannie and I have always enjoyed traveling. Once we retired – I left the University of Florida in August of 2012, and Jeannie from the Seminole County School System about a year later – the prospects of longer adventures was even more inviting. Though our health was good and we were financially secure, the one thing that could have held us back was the responsibility and expense of our home, cars, and all of our stuff. Even though it was a beautiful house on a piece of property that backed up to a green space filled with wildlife, its maintenance and upkeep took time and money. Unforeseen issues (broken pipes, lightning damage, etc) that had arisen while we had been away on previous trips merely added worry to the responsibility.

It didn’t take much discussion to agree that if we were to downsize our possessions into storage, sell the house and cars, we could take a small apartment almost anywhere. The big question would be “Where?” The first locations we considered were relatively nearby in Florida – Winter Garden, or Gainesville. But when we considered the bigger picture, we realized that we could go almost anywhere in the world! Over the years there had been opportunities to live overseas, specifically in Australia and England. Each had come disappointingly close but failed to materialize. However, with retirement we were no longer limited by our former careers and now had the opportunity to go where and when we desired.

The selection of where to go necessitated considering many factors; culture, climate, cost of living, politics, visa restrictions, language, availability of public transportation all had to be taken into account. We even wanted to be near a university for diversity and culture. Early on we decided on Europe and the UK, and the single biggest factor as to where we might go came down to visa limitations that would allow us to reside in one place for more than three months.

The Schengen Agreement basically allows non-EU citizens to stay within the European Union (EU) countries no more than three months – more on that later. After much research we tentatively decided on Montpellier on the Mediterranean coast of France. –WCF

A venture such as this has so many facets. The first of the two biggest issues related to preparing and selling our home and possessions. This was no easy task for several reasons. First it was a beautiful home in a great established neighborhood, in a special part of the country. The home meant even more to us because after it was destroyed by a fire in 2003, we were able to truly make it ours when we rebuilt. The second issue was that we accumulated a lot of stuff in the ten years after the fire,  as well as some things from the estates of our parents. There was a bit of physical prep work do be done on the house as it too had aged, though nothing significant. We contacted a Realtor who assured us the house would move quickly considering all the improvements made during the rebuild. We held our first garage sale and either sold or gave away a vast amount of the “low hanging” items. We alternated purging our closets and packing, with removing photographs and art from the walls, patching the holes and painting. There was a lot of work to be done.

The second major facet of this venture involved where we would go once we become “house-less.”  Ideally, we would like to go to Montpellier, France for example, for three or four months, then to Germany for a  month or so, then Italy for a while … you get the idea. But the Schengen Border Agreement, says that we cannot stay in any Schengen country (pretty much ALL of the EU) for more than 90 days. There are some visas that will allow staying in a given country (like France) for up to a year, but it requires jumping through lots of bureaucratic hoops and isn’t cheap. Another option is to spend 90 days in the Schengen area, then go to a non-Schengen country (like the UK) for 90 days then return. It requires more planning, but we could do that. Then there are the issues with health insurance, banking, and other pains that come along with any move. Oh, and then there is the language … that is still another chapter. – WCF 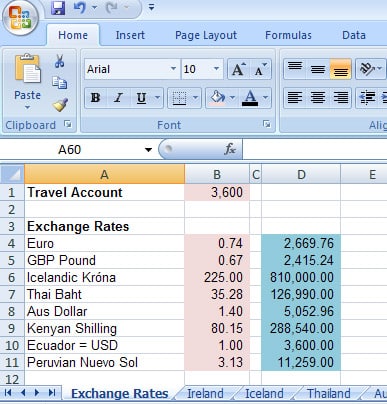 Chris and I work fairly well together, as long as we aren’t sharing the same task. So while he is purging the garage and attic, I am working on the to-do list and budget. He is the artistic one, writing entries for the blog, and taking photographs, I am the project manager and Excel spreadsheet master. Now if I can only get him to work on the items in the listed order!

The home tasks are organized by inside and outside (so we can prioritize based on weather), and things we want to get done before our “final” April Fools Party (a somewhat annual event to celebrate our wedding anniversary), and the final items to complete before we put the house on the market in June. (As a long time project planner who is accustomed to “crashing” the schedule, I am hoping we can be ready to list the house in May, and late April would be quite a feat! But I haven’t told him this yet.)

To keep in practice with Excel, I have extracted all spending data for 2013 from Quicken. I do love pivot tables, so I’m organizing the numbers to see what expenses will go away (car insurance, mortgage, property taxes…), estimate new costs (apartment, train/bus, US storage for belongings we keep, etc). Medical insurance is one of the more challenging items to determine what really is needed. How do we maintain basic coverage in the US, not knowing how often we’ll be back, and add international coverage including evacuation to cover us for an uncertain period of time and varying destinations.

I am also researching “capsule wardrobes” as shopping has been a serious hobby for me. I am trying to visualize traveling with one small suitcase and carryon bag, and living with a closet with no more than 2 feet of hanger space. But when I look inside my huge closet here at home, I realize this might be the big daddy task of them all!! So every week I challenge myself to pack the items I really don’t wear and won’t take, and then drop them at a charity shop or consignment, and resist the urge to stop at the mall (would kind of defeat the purpose!)

The web is a wonderful tool. Not only can we get the information needed, we can read the blogs of other nomads to learn how they have dealt with the same issues, and to learn from their experiences.

When Chris and I were first discussing the plan to downsize and travel, we decided to establish a loose target date to have the house ready to put on the market. Anticipating that our house might sell quickly, we also agreed that we need to be mostly ready regarding the move details. Meaning we need to decide where to live, research apartment options, prepare visa application, study travel insurance and domestic insurance options, figure out banking arrangements, and create a reasonable budget including income streams, etc., etc., etc.

Those two dimensions include a lot of work to be done, some tasks to be worked separately and others jointly. And even with a draft list of tasks, we realize this is quite a daunting set for a preliminary June target.  One thing we agreed is that the pace of work would not be such that we can’t enjoy our current lives being retired in Longwood Fl. Be Here Now is a philosophy we both endorse (what year did Ram Das write his inspirational book?), though Chris appears to have an easier time with it. Guess working as a project manager for almost 40 years pushed me to spend more time looking ahead and planning next steps.

Our daily walks provide both exercise and time to share thoughts. But I also like my daily reading time. A Kindle provides additional portable reading options and I also still do check out books at the library. I am currently reading “My Life in France”, a memoir by Julia Child. What a great book! The writing is excellent and moves me from laughter (“it’s easy to get the feeling that you know the language just because when you order a beer they don’t bring you oysters…”) to drooling when she describes a delicious dish she has prepared.

I am also reading various travel blogs to understand life in France. Since my clothing will be much more limited than I’m used to at home, I’ve been looking at blogs that discuss fashion. “Find a comfortable, nice outfit for traveling. Watching you guys come off a plane or train is like witnessing a 4AM fire drill at a college dorm.” If you’ve ever spent much time in airports, you know well how true and sad this statement is.

Since writing is “now time”, I need to balance it with some “planning time”. Back to the budget prep… – JTF

Going is not the same as leaving …

One does not come to embrace an adventure such as this without weighing the downsides. We just spent the weekend in Gainesville, Florida to attend a dance performance at the University of Florida. While riding around town we were reminded why we had considered moving here after downsizing (and before we had expanded our horizons to Europe).

While there we reconnected with several friends, some we hadn’t seen in many years. It was so good to share time together again. We spoke of life’s ups and downs, birthdays and passings, other friends whose paths we had crossed. Though each of us is getting older, I didn’t see it. The eyes sparkle and the wit shines just as it used to – provided you don’t look too close.

Of course we briefly discussed how aging’s aches and pains add to the days. One dinner companion, I learned after our goodbyes one evening, has had particularly difficult health issues. Though we conversed and laughed throughout dinner, I only saw the friends I knew and remembered, unaware of the challenges she and her husband have faced.  Other friends we visited have had hardships in their lives as well, though none apparently quite as serious.

As we walked the woods on the property of another friend, who together with his lovely wife works a small farm, we were again reminded of why we had considered moving back to this part of Florida. The beauty of north Florida’s woods, forests, wetlands, and rivers holds a very special place in our lives.

It isn’t easy to think about leaving such people and places behind, but we are not leaving, we are going someplace different. To me there is a rather significant difference between the two. Besides, we will be bringing them all with us, at least in our memories and hearts. – WCF