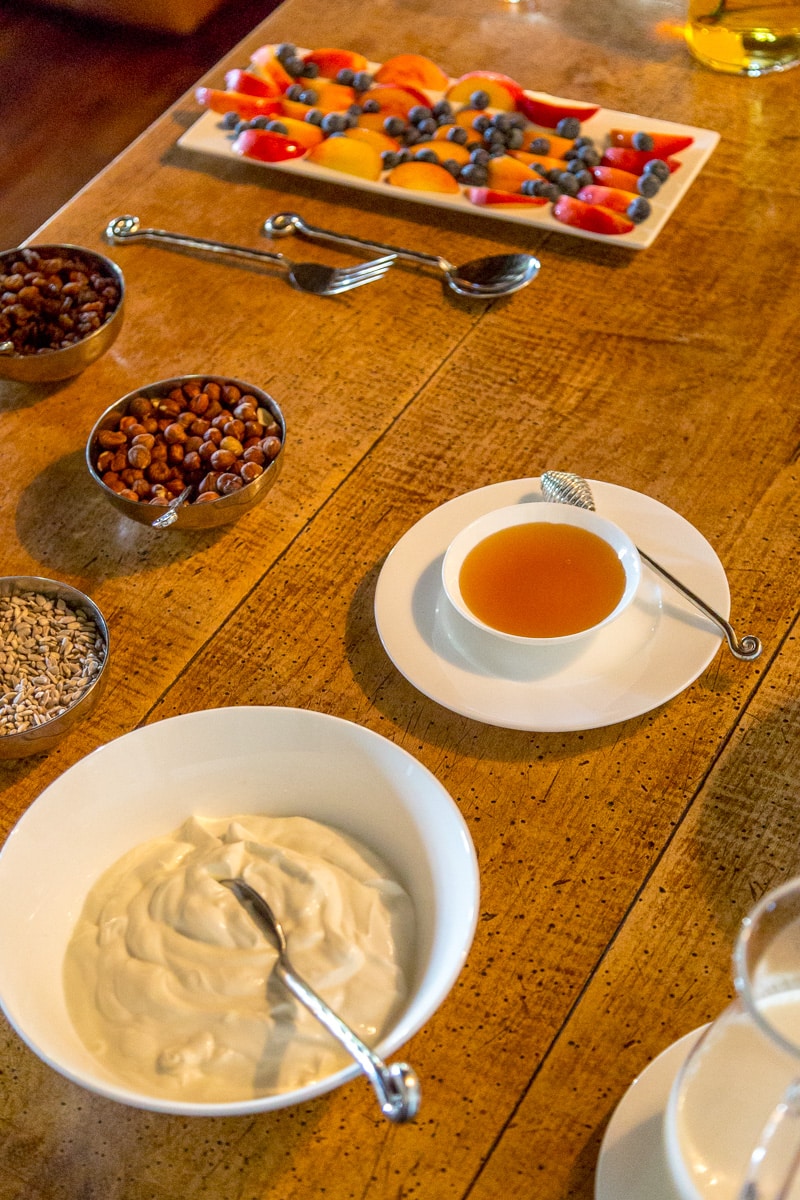 Tuesday, June 12 – Awakening to another beautiful morning in this stunning region of the world, the day began with breakfast starters of yogurt, muesli, granola, seeds, nuts, fruits, juices that we served ourselves. And then Zana made us crepes with lemon marmalade and toast. We were ready to meet the day.

Preparing to set out, we collected our sandwiches, water, bananas, apples, fruit and chocolate bars. Today, Zana would be our guide and we would walk from the inn.  The climb today would not be quite as rocky or steep as yesterday, but would be much longer with much of it on paths with shade. 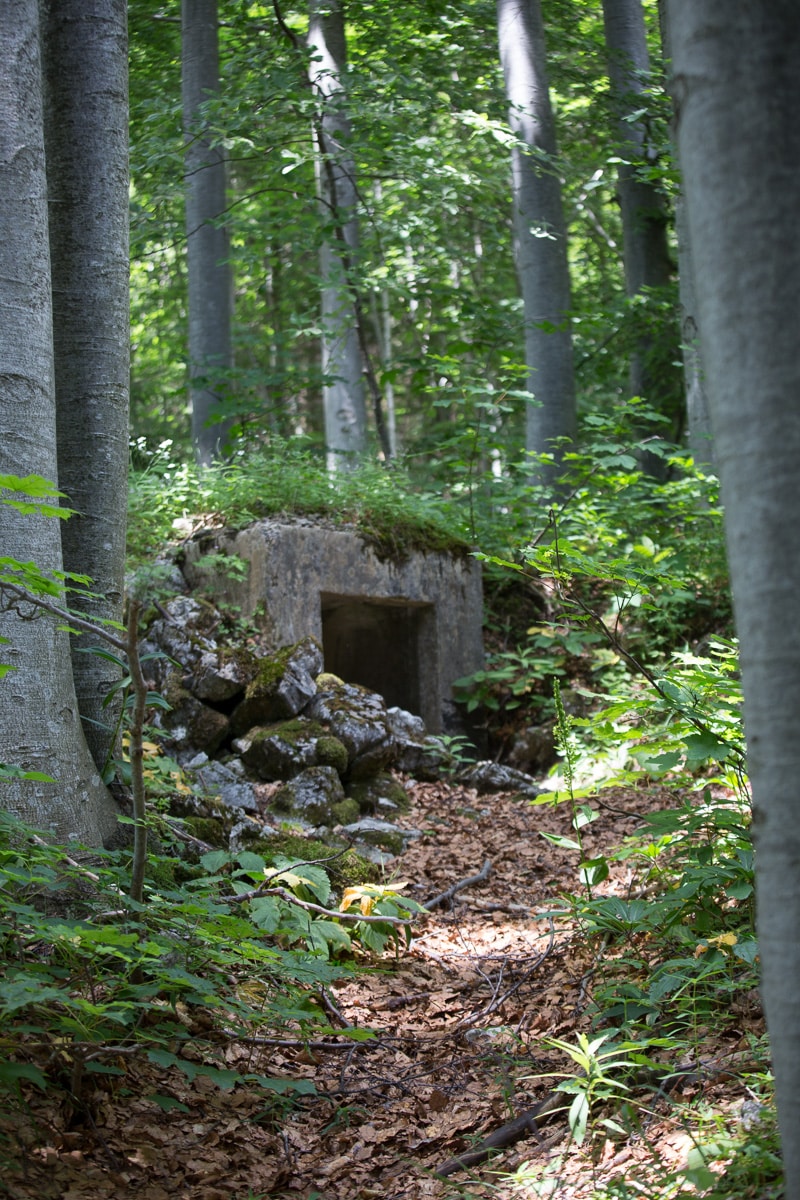 There were, again, many bunkers along today’s route, but these were Slovene fortifications, and of a different style than the Italian bunkers we had seen yesterday. Along the way, we had to negotiate a number of areas blocked by logging, mostly for controlling outbreaks of bark borers. At one point we had to climb over stacks of large logs blocking our way.

We continued on a more gradual climb toward Blegoš Mountain where our lunch stop was planned at Koca na Blegošu mountain hut, just down from the peak. The 360-degree views from the summit of Blegoš are renowned, and it would be disappointing to miss it. We sat at the picnic tables and Zana got us tea/coffee/soda as we wanted. At this point the time was 14:30, and a decision had to be made. She pointed up to the clearing at the top of the mountain with a rocky, very steep path. 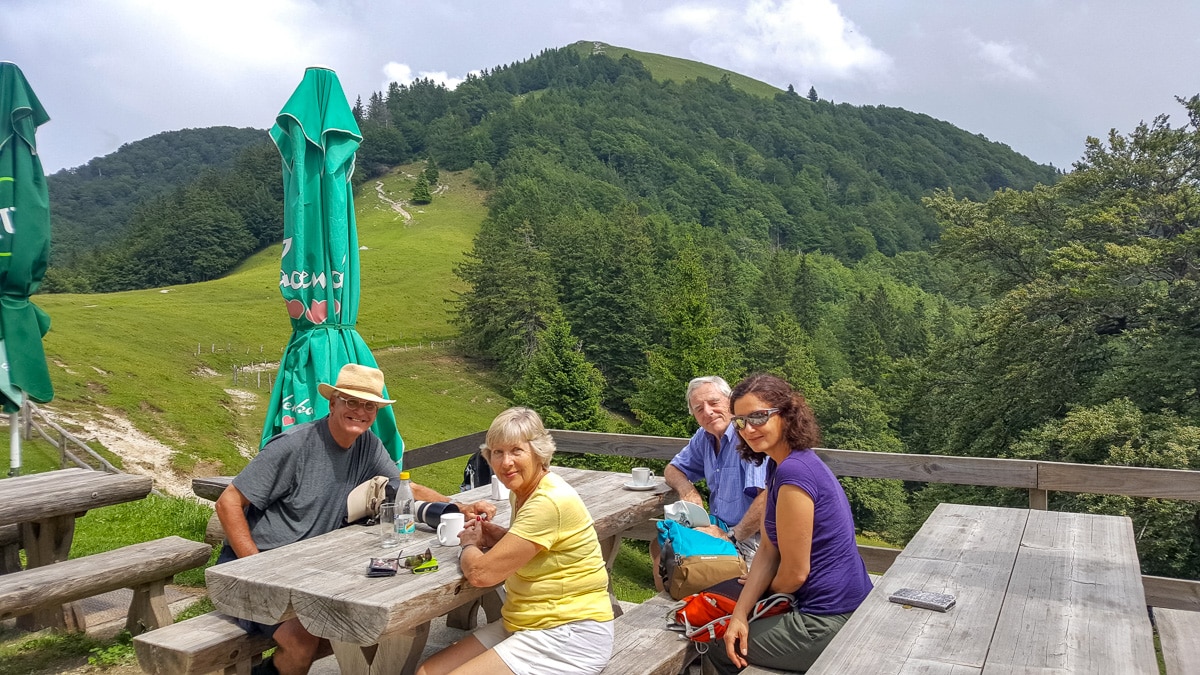 That is the goal, to get to the top for the views. Zana told us that it would be at least another 30 minutes of climbing, with the worst nearest the top. And then the return would be a quite challenging descent, followed by another 45 minute walk down to where Luka would pick us up. 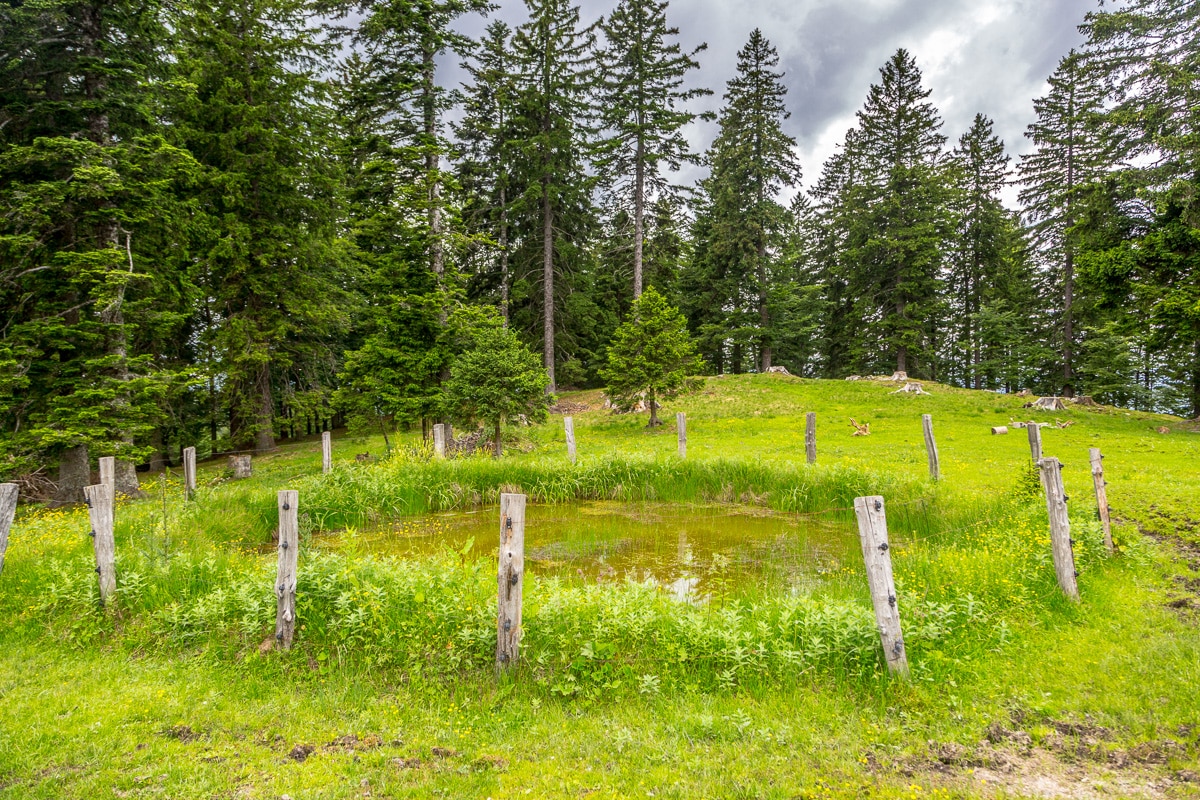 As we each gauged our thoughts about more climbing, storm clouds were building nearby. It was getting darker and we began to hear the rumblings of thunder. We finally agreed that, especially with the approaching weather, we weren’t up for the additional climb. Soon after we started our return, the rain drops began to fall. Our raincoats quickly went on, backpacks were covered and we began our descent.

We were walking on a gravely, dirt road that wasn’t excessively steep, but we did have to be careful as it was easy to skid on the small, loose stones. Down and down we went as the rain fell heavier and heavier. After about 20 minutes, small hail began bouncing off our hoods and packs. As it fell harder, Zana pulled us to the side and suggested that we should wait and see if the hail was getting larger or smaller. 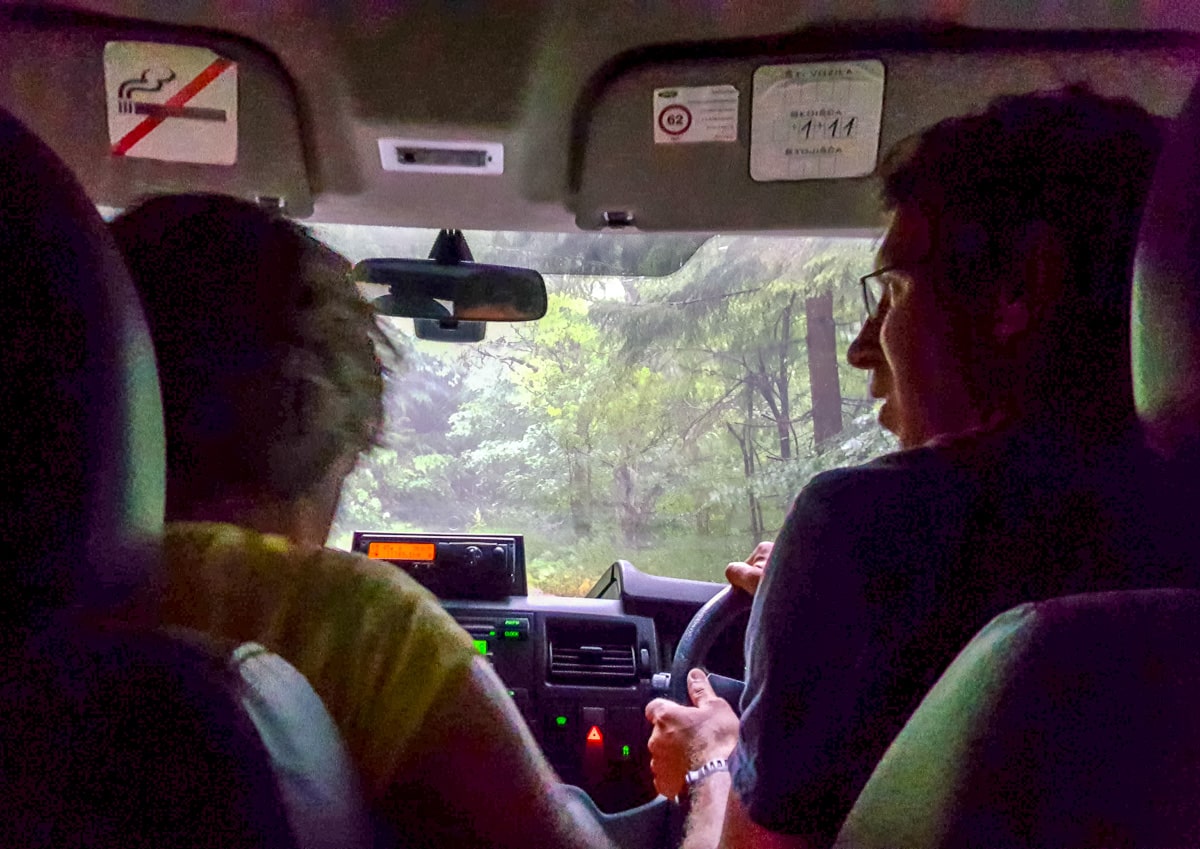 As we huddled, we notice the lights of a vehicle approaching. Soon we saw the color and size of the van and knew it was Luka to our rescue! So we threw our very wet gear in the back, and then flung ourselves into the van.

There was no place to turn around on the single-track road, and it was quite tricky for Luka to maneuver the van down the narrow curvy road in reverse with the rain continuing to pour down. Toward the bottom it took some guidance from Zana on the left and Paul and Chris in the back, but before long we came to an intersection where Luka was able to point the vehicle in the right direction. After that it only took about 30-minutes to arrive back at Pri Lenart. 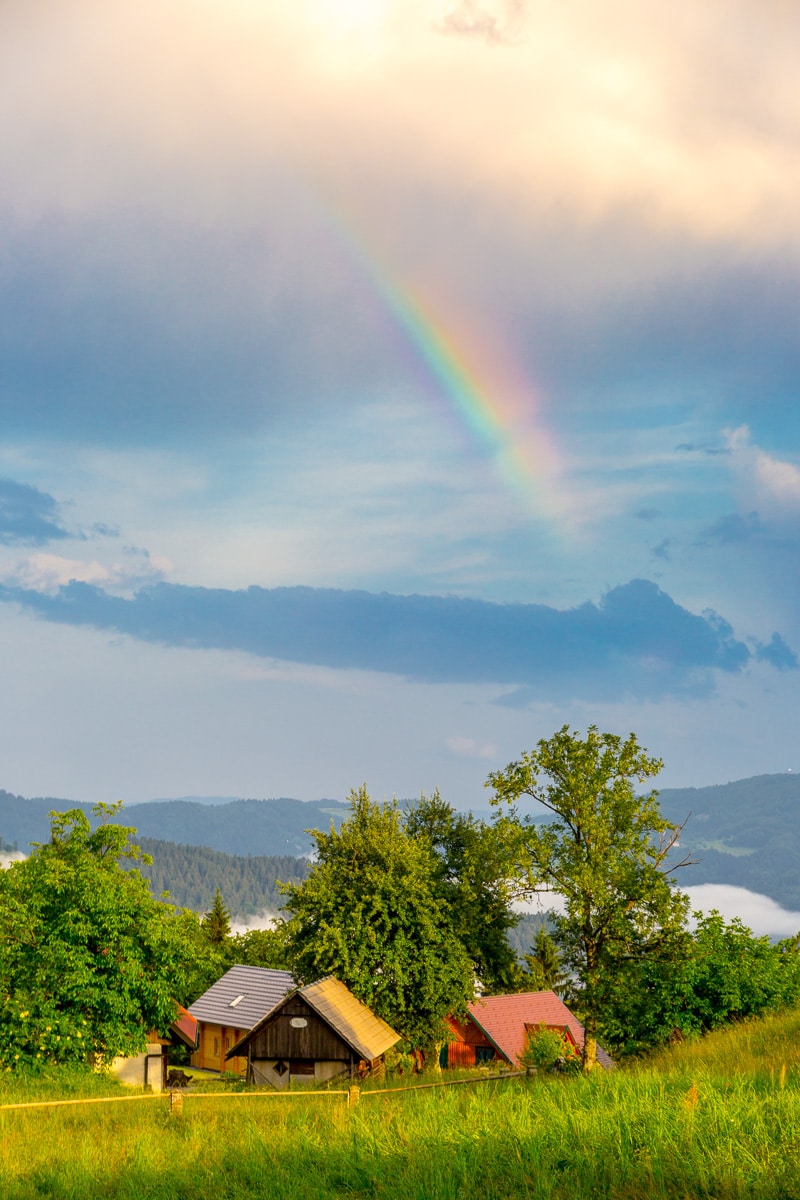 Wet shoes came off on the porch, some of the wet gear went into the drying room (what a massive hot water heater they have), then we took ourselves and our soggy clothing up to our rooms. Ahh, warm showers never felt so good.

However, it seemed that the storms had knocked out the electricity. Not so bad for us as the rooms were bright enough (but no internet), however dinner preparation might be impacted. 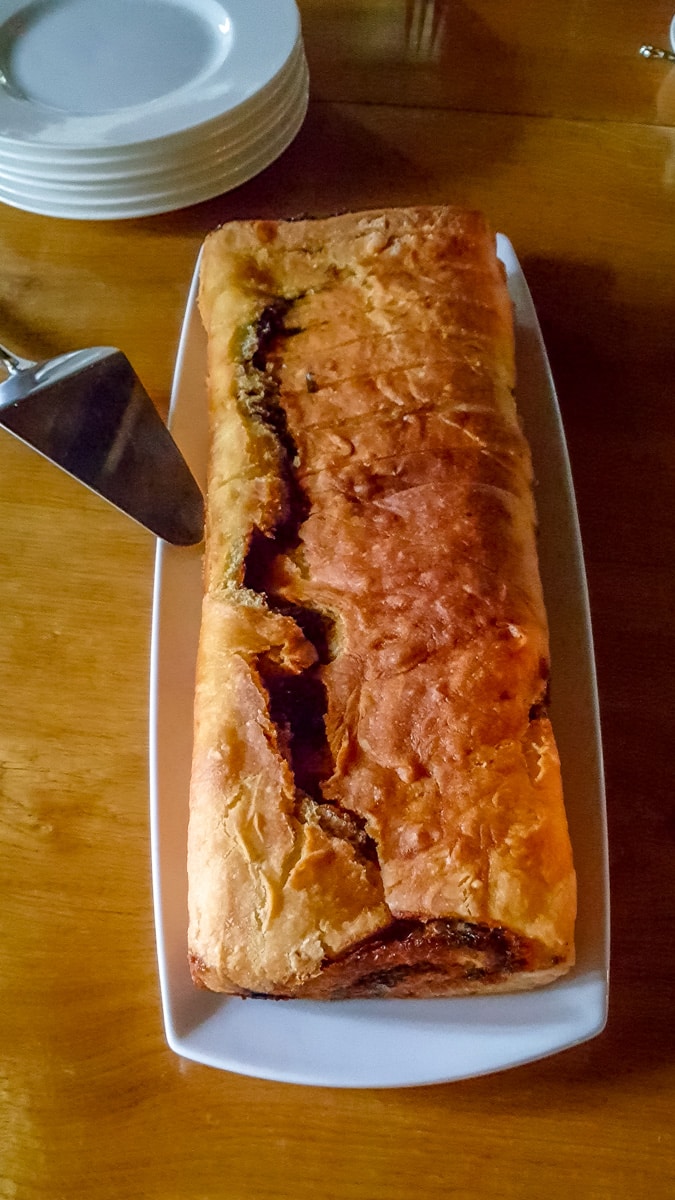 After showers it was time for afternoon tea/coffee and cake. Today it was tarragon potica (pronounced po-teet-za), made by a neighbor. In the past, Zana had made it herself, but she now orders it from that local expert.

Fortunately the electricity came on before too long and didn’t affect the cooking process very much, and a delicious dinner was served.

No longer hungry, but still tired from the day’s long hike, the evening’s schnapps was just enough to push us upstairs for a deep sleep filled with blue skies, puffy clouds, mountain trails and wildflowers.

Wednesday June 13 – Todayy was scheduled to be a rest day. One option included catching a ride to Škofja Loka with Luka and Zana who were shopping for provisions. Paul and Janet chose this alternative and from there took the bus to Ljubljana for the day. 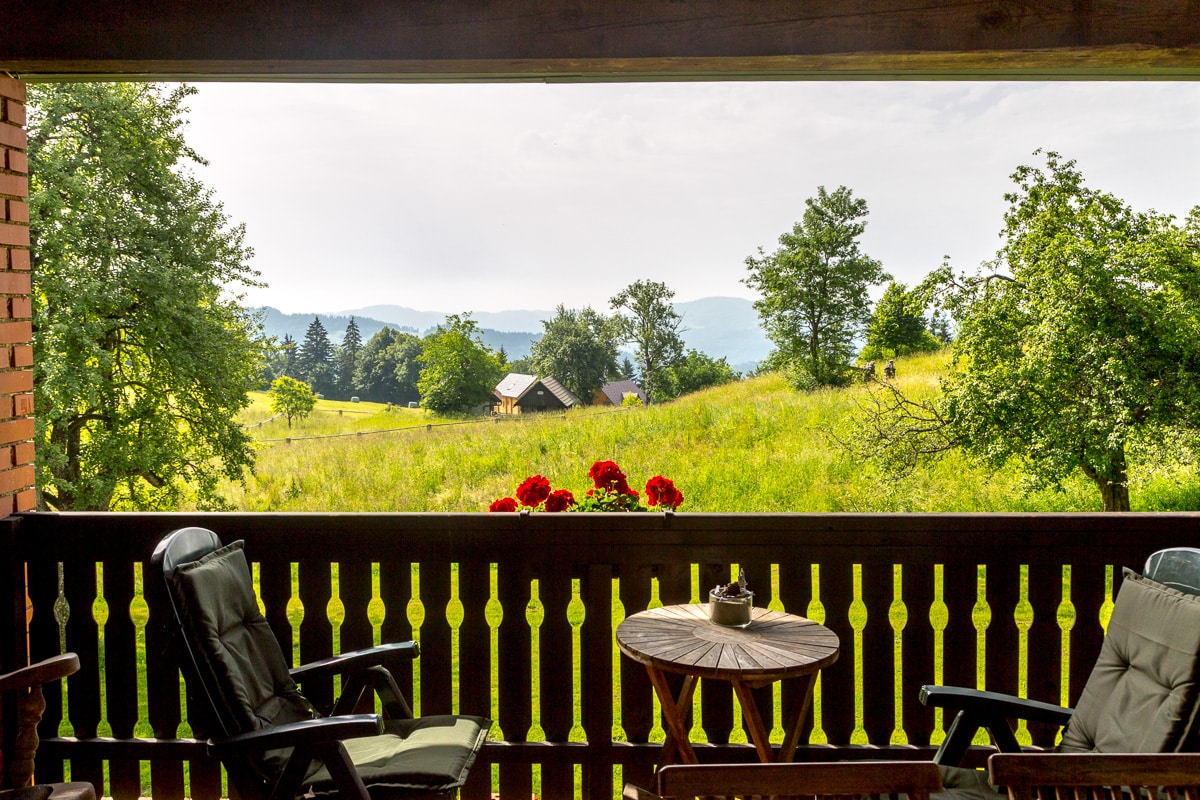 But we decided to stay at home.

After breakfast together, we waved as our companions took off. Then we gathered our digital devices and went out to the porch. The day was cool and beautiful, and the sounds of the Slovene countryside made for a relaxing morning writing and editing photos, and later, strolling through our hamlet of Podvrh. 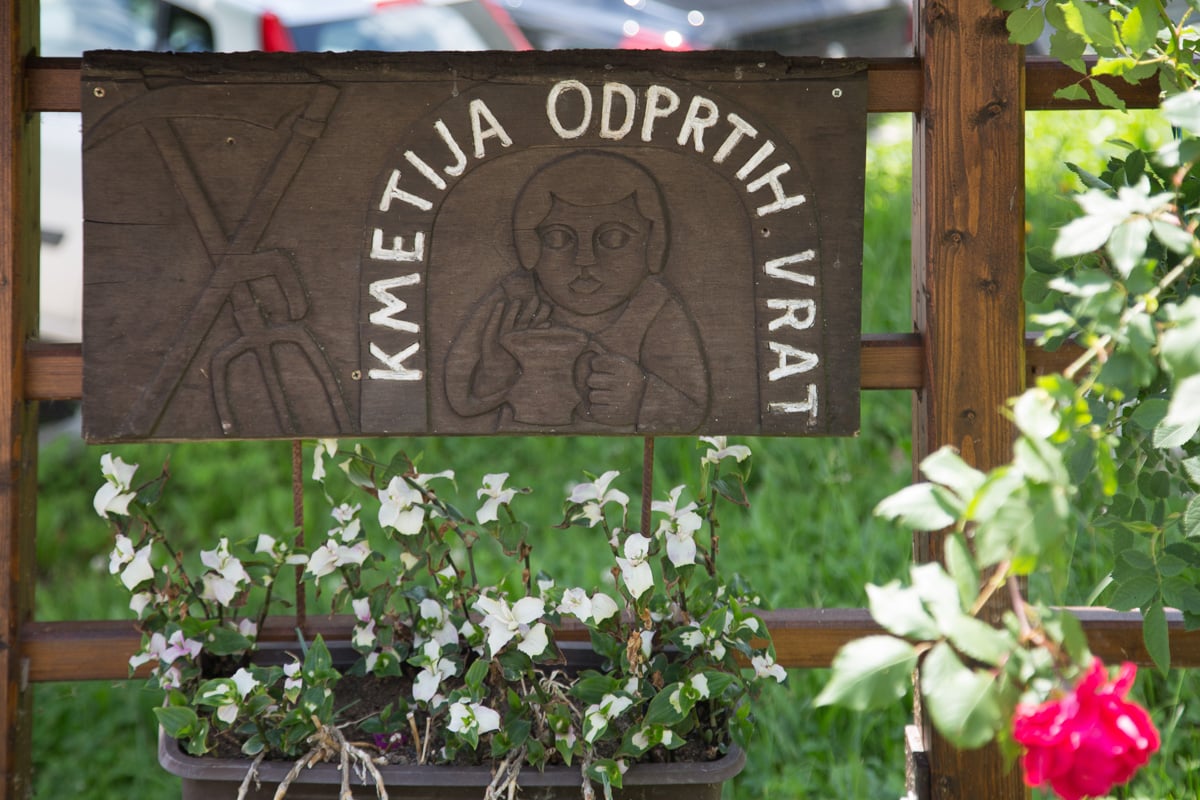 The evening’s dinner would be at the Pr’ Andrejon Open Door Farm – Kmetija odprtih vrat Andrejon, where we had stopped for a break on a previous day. Paul and Janet had returned from Ljubljana earlier and Luka drove us there together. Tonight we met Anka , whose husband had greeted us there on a prior days hike . 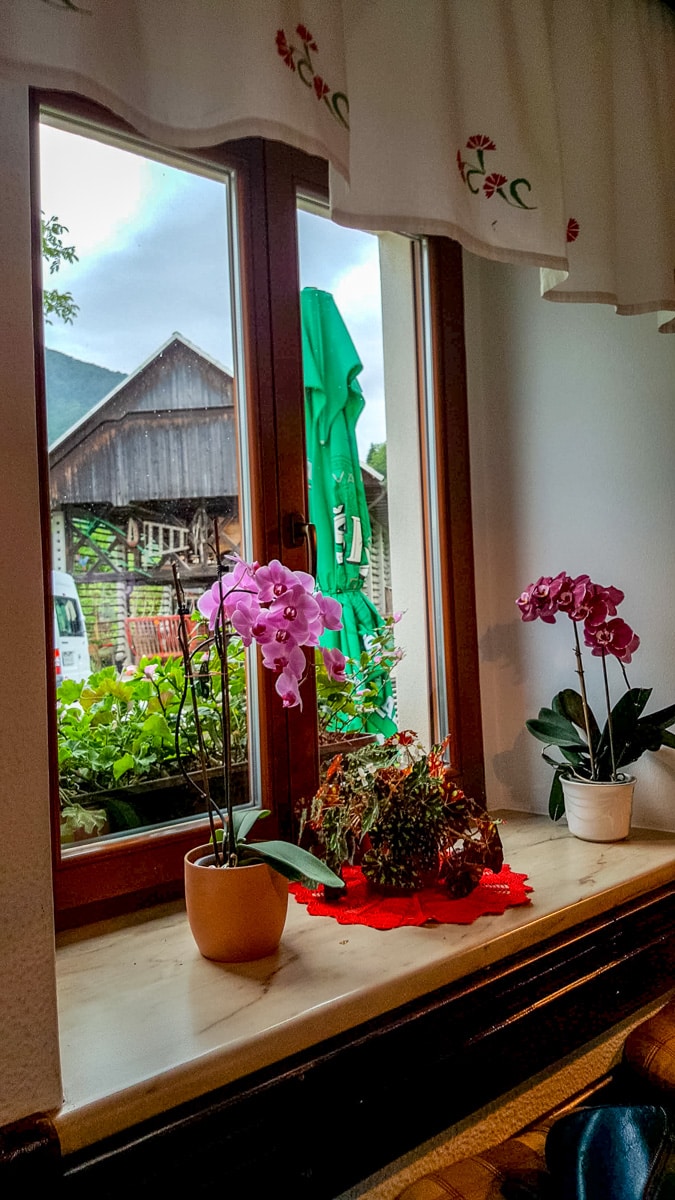 The large, typical, country farmhouse was cozy and filled with family photos, knick-knacks and hand–made decorations. A large ceramic stove, opened into the kitchen for cooking and extended into the living space of the next room to provide heat, including an area on top for for sleeping in the cold winters.

We were seated in a cozy corner of the dining room, and Anka was soon bringing us a homemade Slovenian feast.

There was no menu, but we knew that we were going to experience a sample of true Slovene ‘soul food’. Everything that was served, and a lot was served, was simply delicious, freshly prepared and served with typical Slovenian hospitality.

After dinner there was more conversation, and before long Luka arrived to take us back to Pri Lenart, but not before contributing to the exchange by acting as a translator.  Anka spoke some English, but Luka was able to fill in many of the gaps in her wonderful stories. 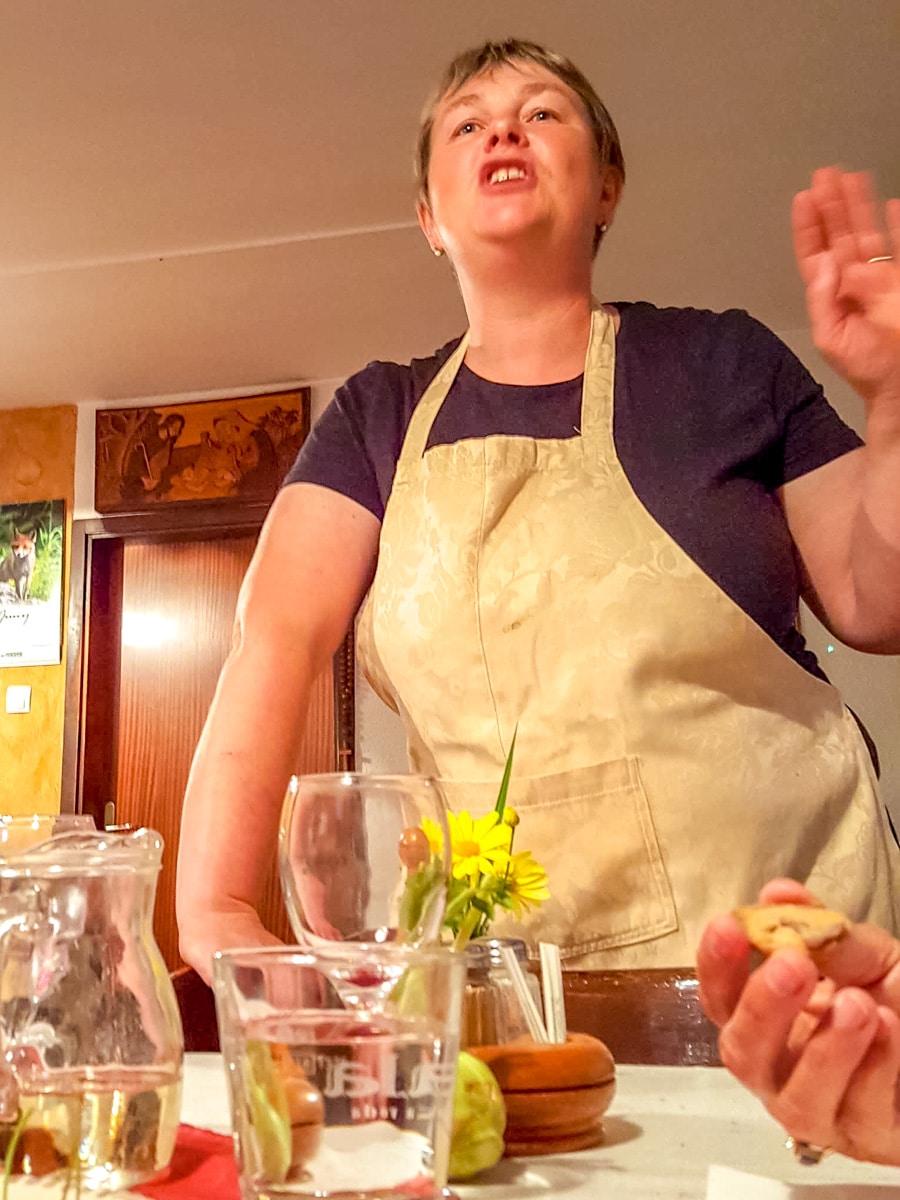 It was interesting that Anka  reminded Jeannie of her cousin, Barb; while some of the speech rhythms and pronunciation were reminiscent of her Aunt Joann who both lived in Wisconsin. With Luka there, the stories became more animated and detailed.

We inquired about some family photos on the walls, and the stories continued. Anka  shared the story of her daughter’s wedding and the wedding album. Some of the traditions portrayed in the photos were right out of books and articles we had read.

The hour was getting late, we had been properly fed, and our transportation was here, so we made our warm goodbyes and returned home for a deep Slovenian slumber.