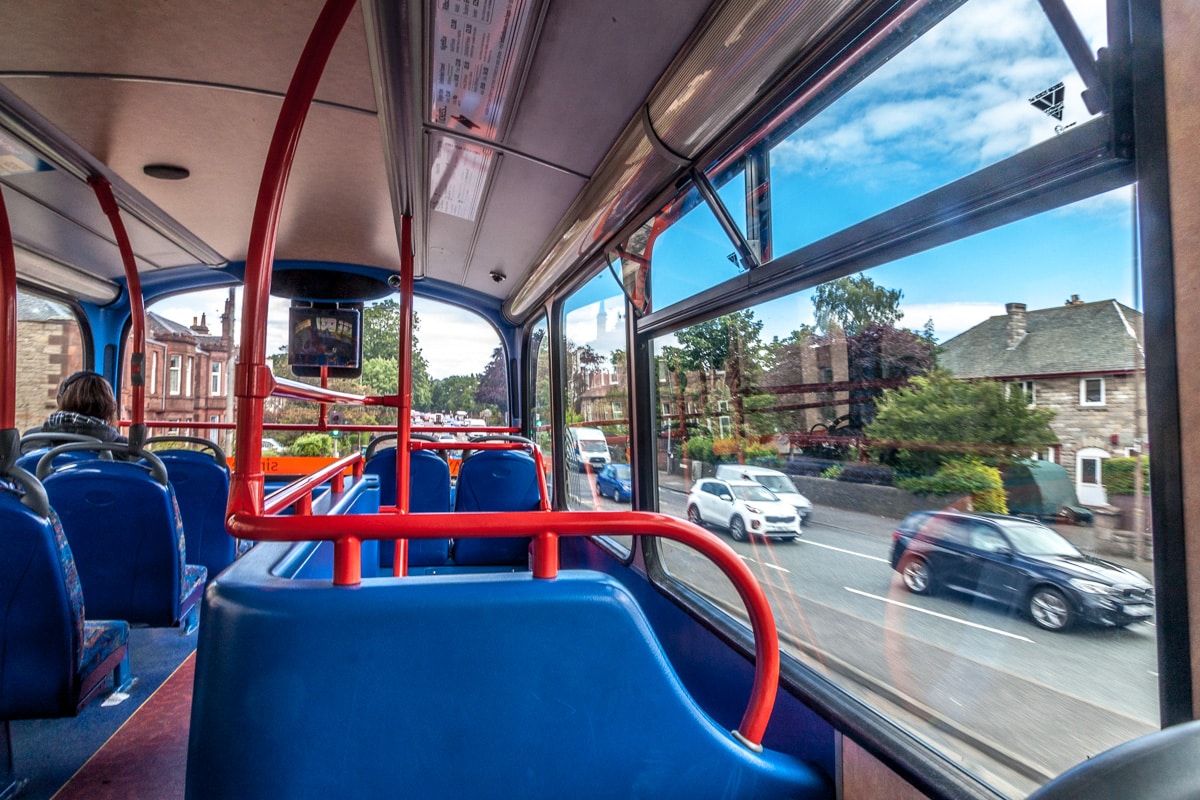 We don’t have a car while here in Edinburgh. It was necessary to have a car in Ireland, and for the last half of the time in England. But, here in Edinburgh though, the places we want to go have either buses or trains. Tours are another option, there is so little flexibility, and they frown when you say something like, “Could you pull over just there, I want to get a photo of those cows.”

Sometimes, however, tours can be the best choice. Of course, Jeannie did our homework, factoring in all of the variables in her spreadsheet complete with pivot tables. She analyzed destinations, stops, cost, group size, and other considerations before coming to me and asking, “So, where do you want to go?” My stock answer is almost always, “Anywhere you choose will be great.” And it is. 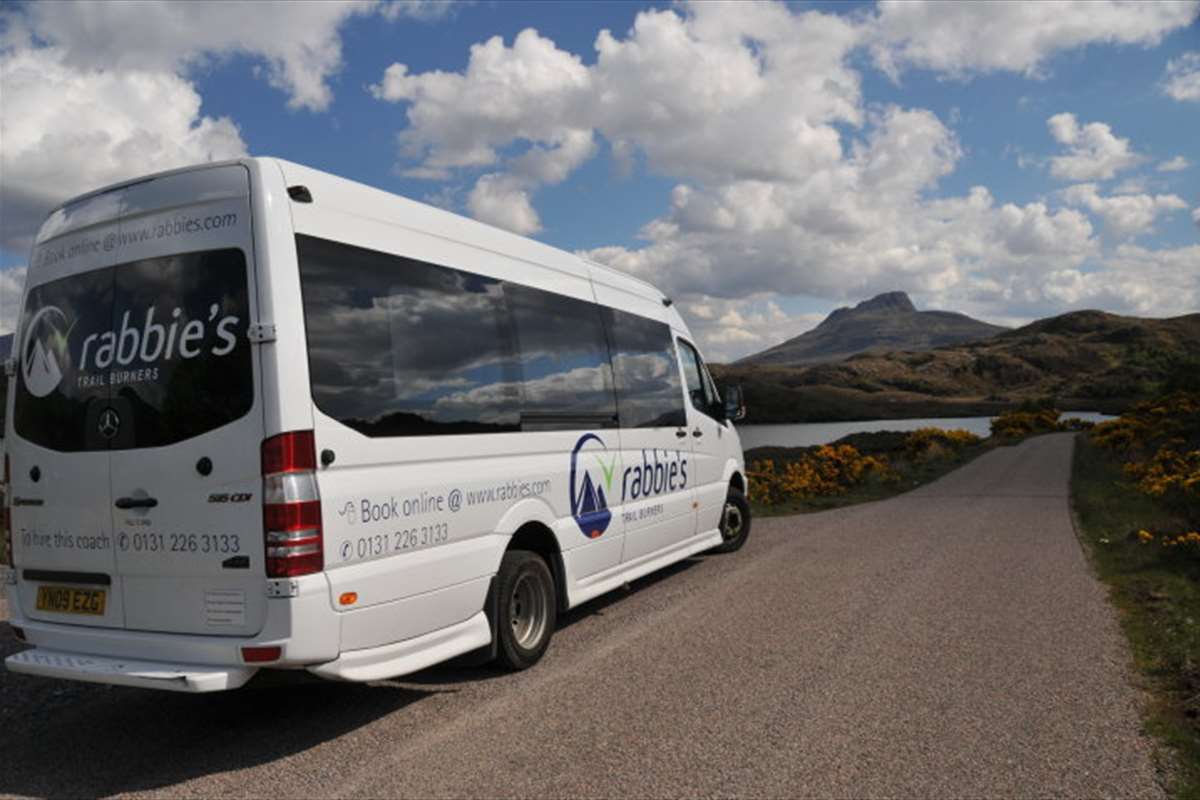 We chose Rabbies Tours, well known for small group tours of Scotland, Ireland, England, Wales and France. They promise no more than 16 passengers in their vans allowing for faster loading and unloading, and they provide ample time at the stops for walks and photography.

We chose their West Highlands Lochs and Castles day-tour, departing from central Edinburgh. Though we could have walked to the departure point we decided to take the local bus instead,then boarded the Rabbies Mercedes-Benz tour bus on time, and took off for the Scottish Highlands. 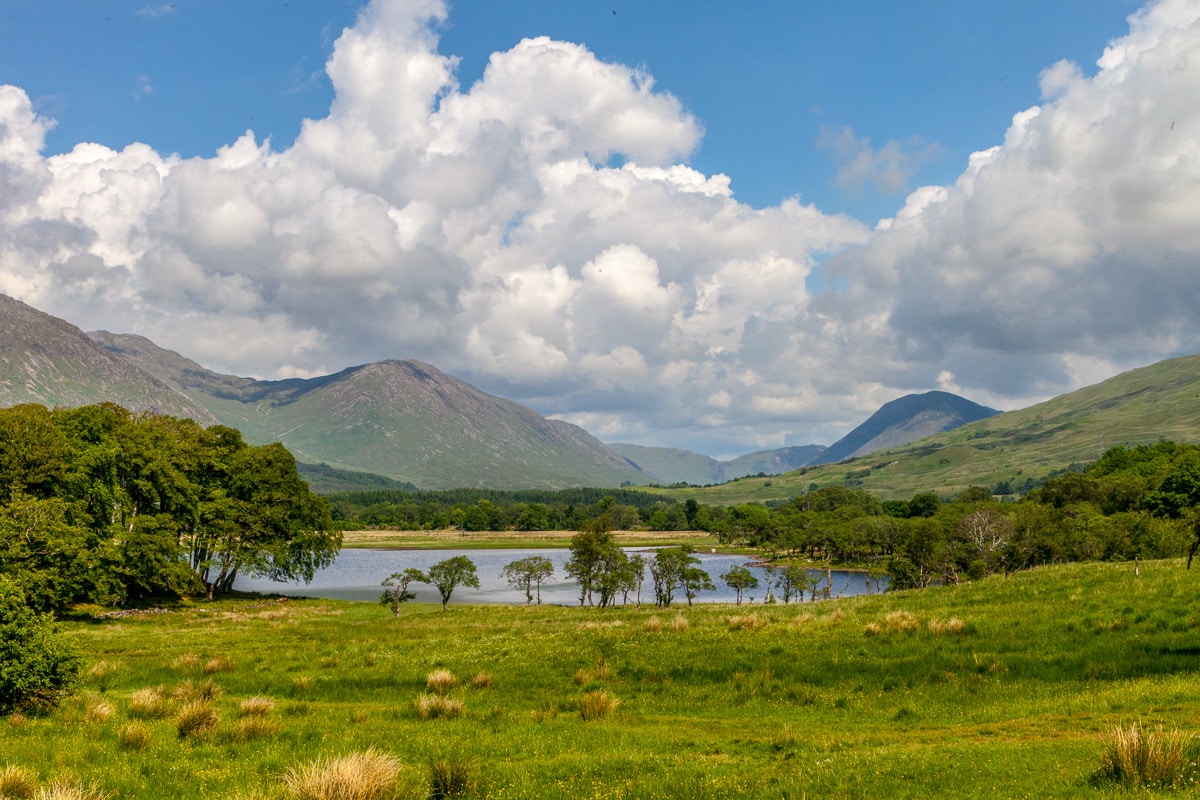 The Scottish Highlands cover the northern two-thirds of the country, it is there that you find much of the mainland’s most spectacular scenery. Loch Lomond and The Trossachs National Park is a national park in centered on Loch Lomond, and was the first of the two national parks established by the Scottish Parliament in 2002.

We entered the National Park and consequently the Highlands about 1.5 hours out of Edinburgh and just northwest of Stirling. The terrain of the Highlands is a beautiful combination of mountains, glens, lochs and rivers. 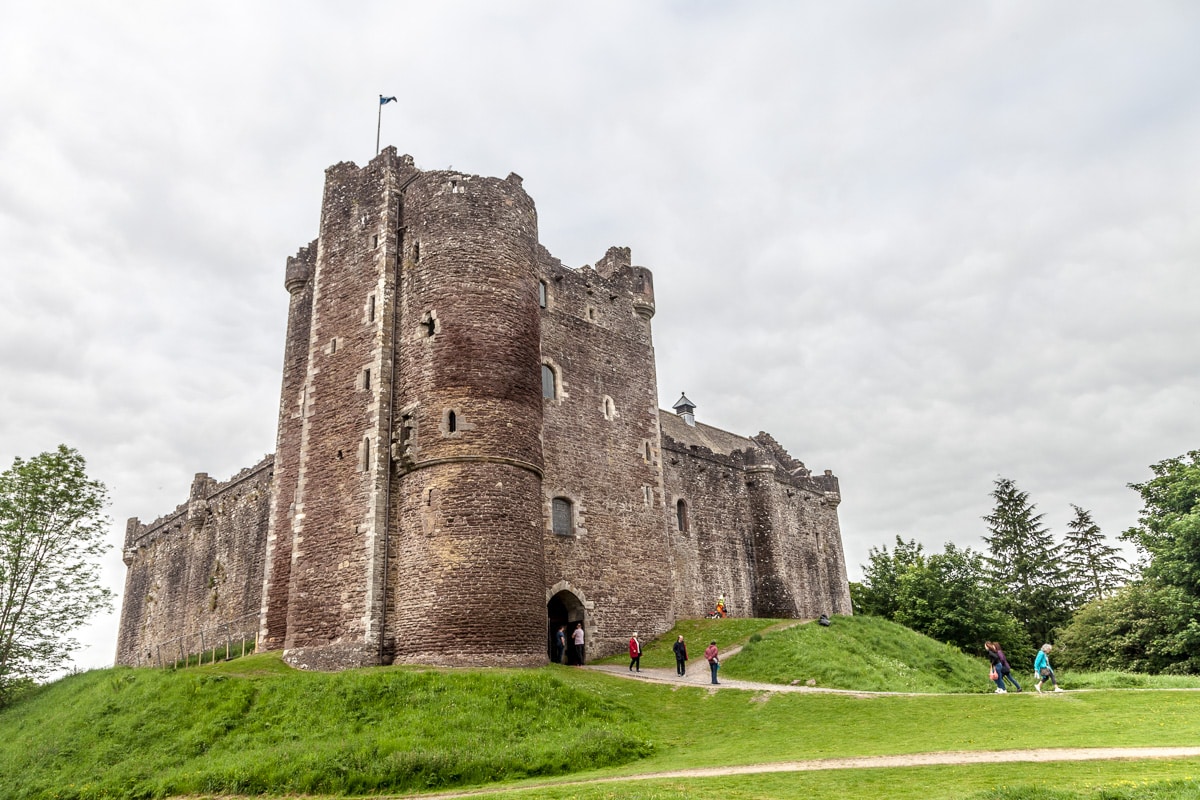 The castle was built in the thirteenth century, then likely damaged in the Scottish Wars of Independence  in the late 13th and early 14th centuries, before being rebuilt in its present form in the late 14th century. 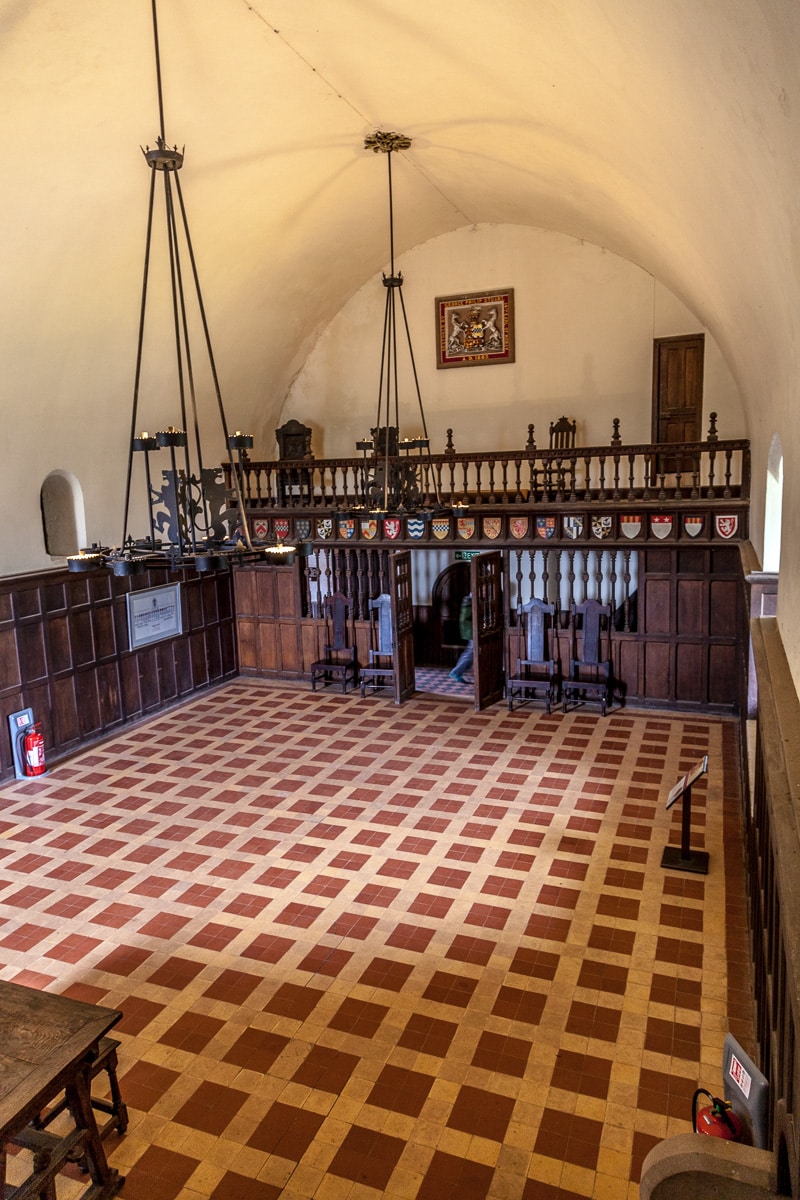 The castle saw further military action during wars of the mid-17th century, and during the Jacobite Risings of the late 17th century and 18th century. By 1800 the castle was ruined, but restoration was carried out in the late 19th century prior to its coming under state care in the 20th century. It is now maintained by Historic Scotland. 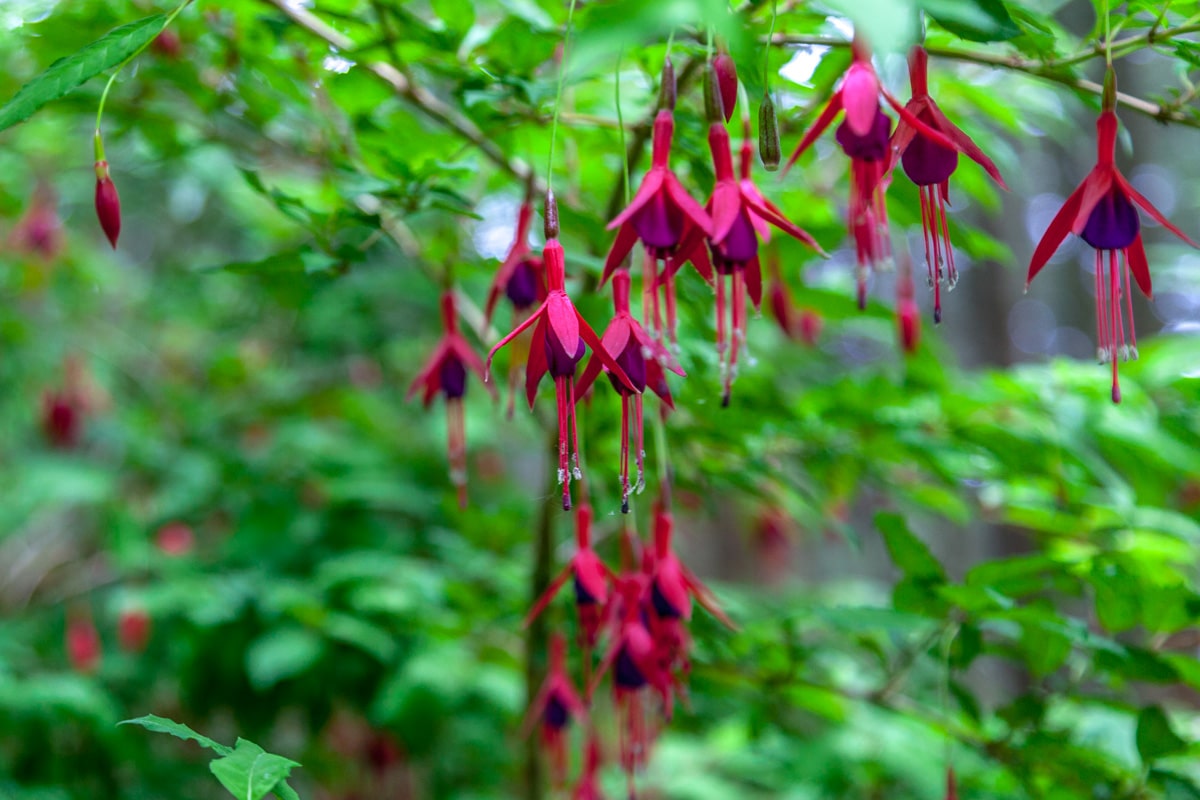 Further along the road we made a comfort stop at Loch Lubnaig, a small, crystal-clear, long lake surrounded by mountains and forests. Though only 5km (3 mi) long, it is up to 44.5m (146 ft) deep. The nearby forest was filled with tall conifers, large ferns, mosses and lichens, and large wild fuchsia shrubs with their beautifully-colored, pendant, flowers. 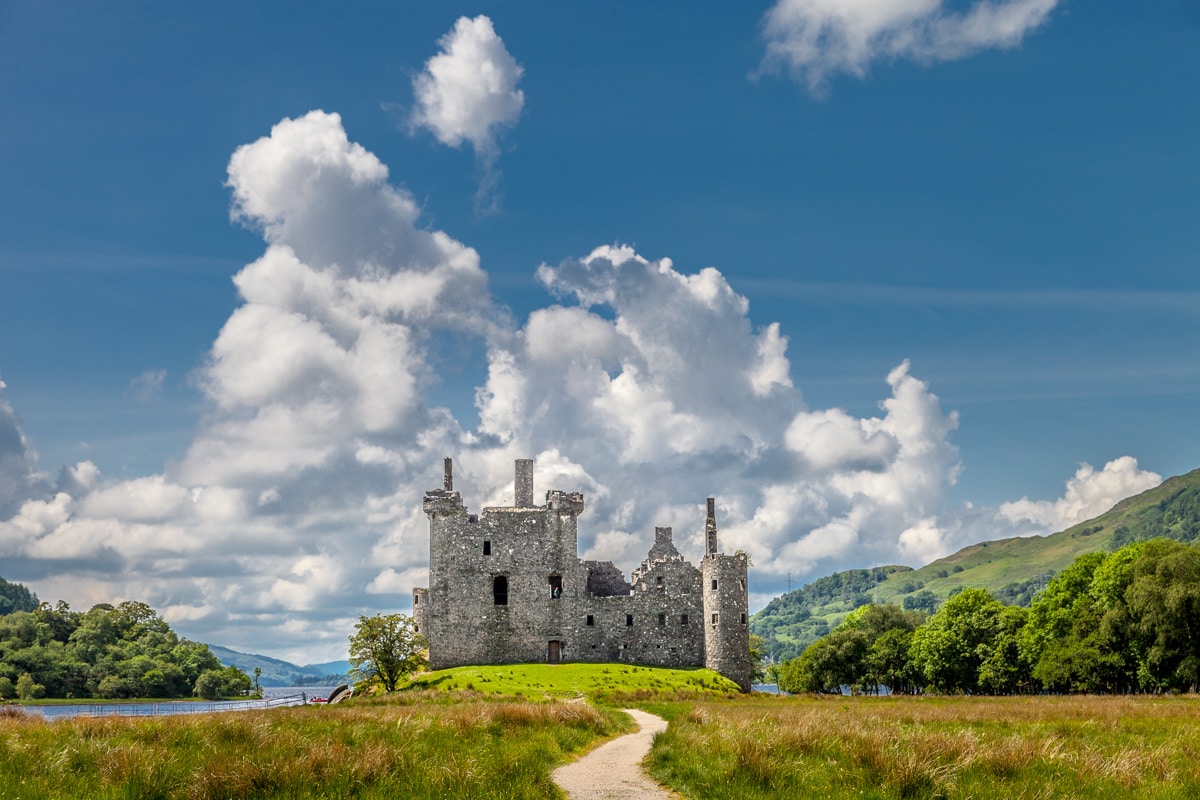 After traveling through the highlands for a while we arrived at Kilchurn Castle. Built in about 1450 it was a five story tower house with a courtyard and an outer wall. Additional buildings and alterations were made during the 16th and 17th centuries. Originally built on a small island in Loch Awe, changing water levels have created a narrow causeway that is occasionally inundated isolating the castle. 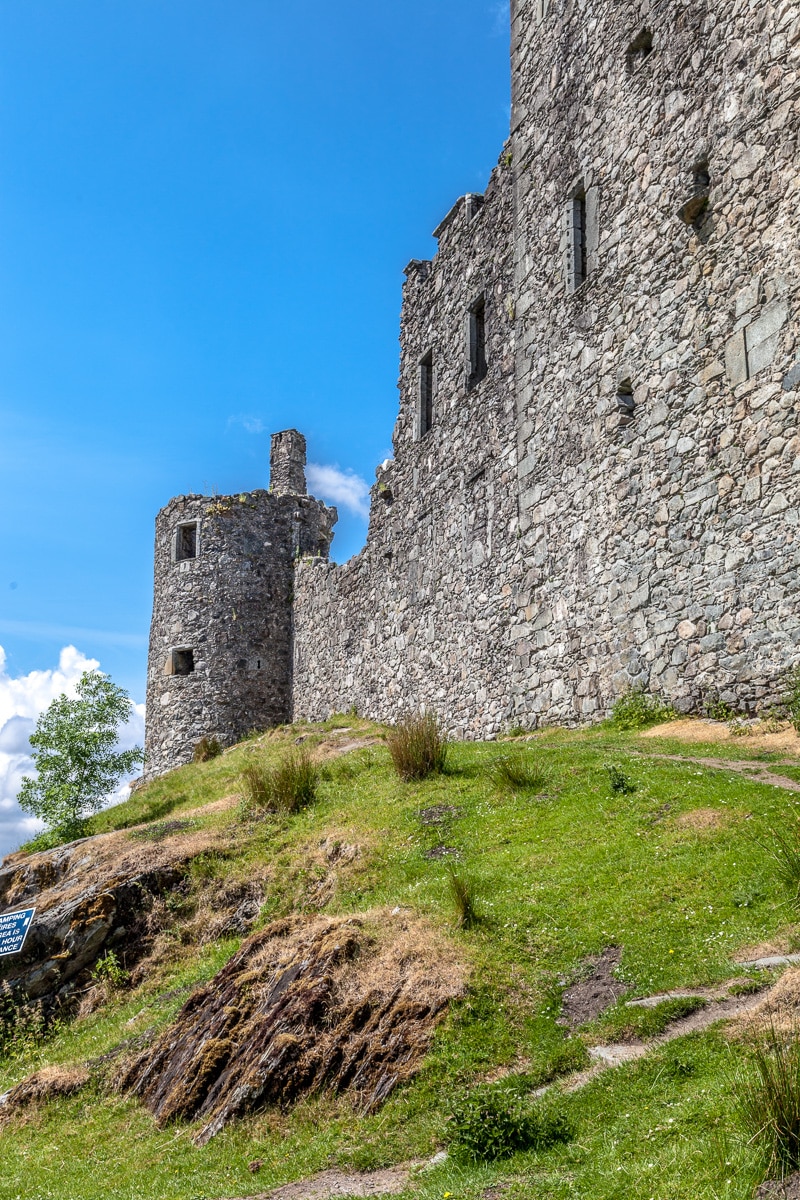 The castle was the site of much violence over the centuries from family feuds, uprisings, rebellions, wars and nature. Today with the castle in ruin it seems to have found some peace.

After a good hike out to the castle and back, we boarded the bus for Inveraray. The day was warm and we were glad to have an air-conditioned bus, though from our short experience in Scotland the temperatures were quite extraordinary. 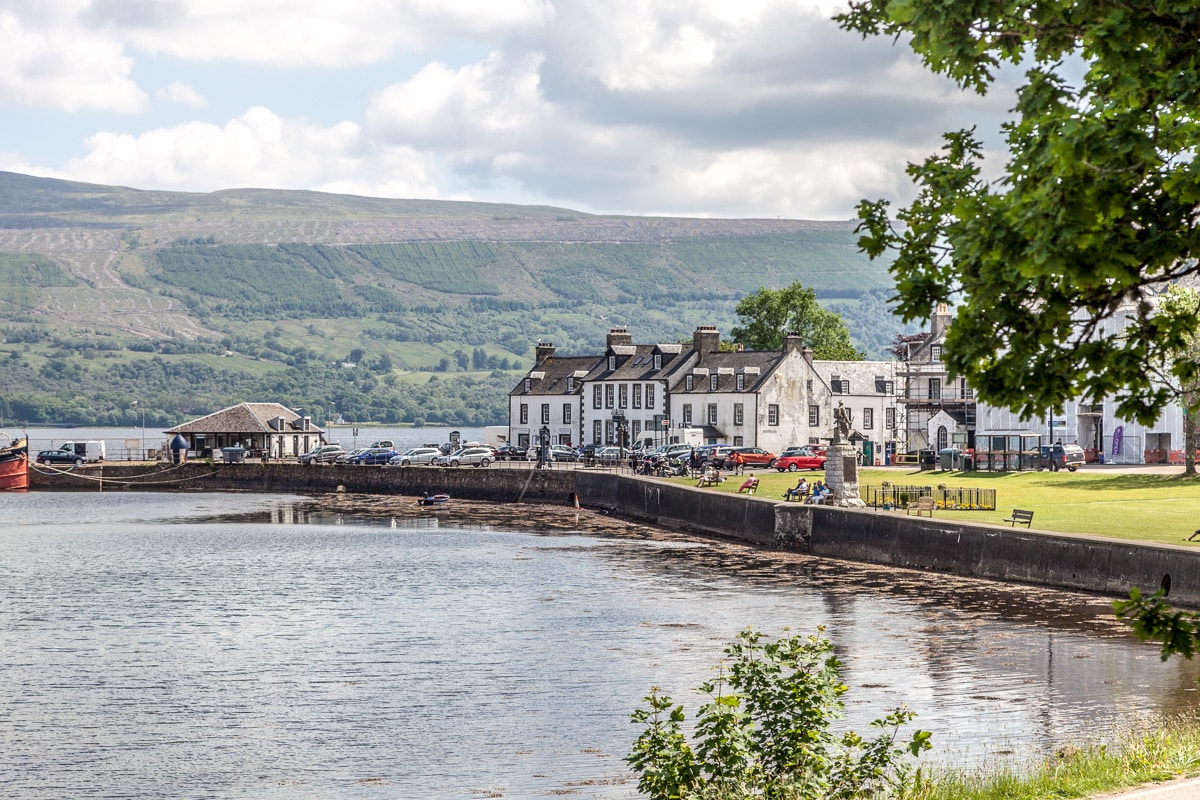 Inverarary is a small town on the shore of Loch Fyne, Scotland’s longest sea loch. With a population of less than 1000, it has likely served the Inverarary Castle estate since the 1400’s. The town’s motto, in Latin, reads “SEMPER TIBI PENDEAT HALEC” (a possible English translation: “may a herring always hang to thee”).

In 1743, construction began on a new castle to replace the 15th-century structure. After its completion in the 1770’s, the Duke of Argyll, chief of Clan Campbell, had the village moved to provide the castle a more secluded setting. 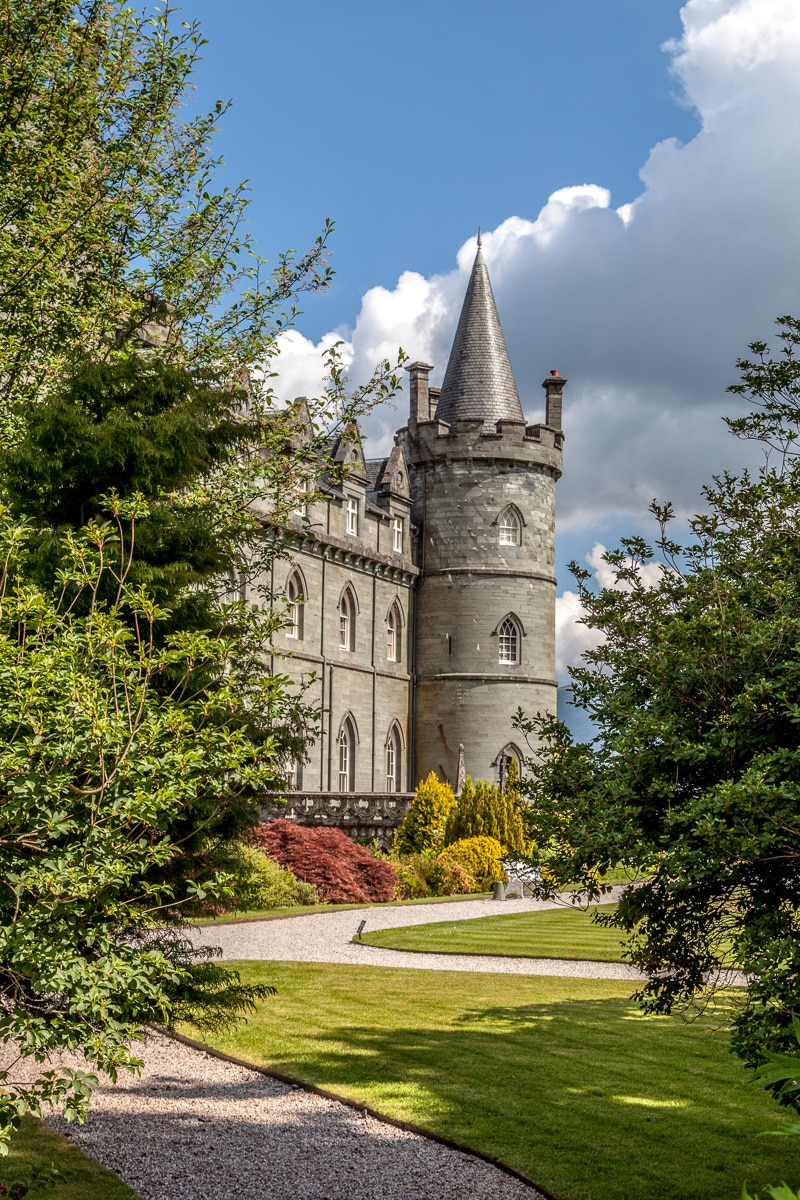 We were scheduled to be in Inveraray for a while, for lunch, and although there were tours of the castle, we strolled the charming little town instead. It was a good choice, and after lunch at a small local cafe, we wandered, or should I say coddiwompled.

Inveraray is on the western shore of Loch Fyne, a sea loch 65 kilometres (40 mi) inland. It has good natural harbour and because it was at a key focal point in the limited road network across Argyll it became a legal and administrative center in the early 1700s. 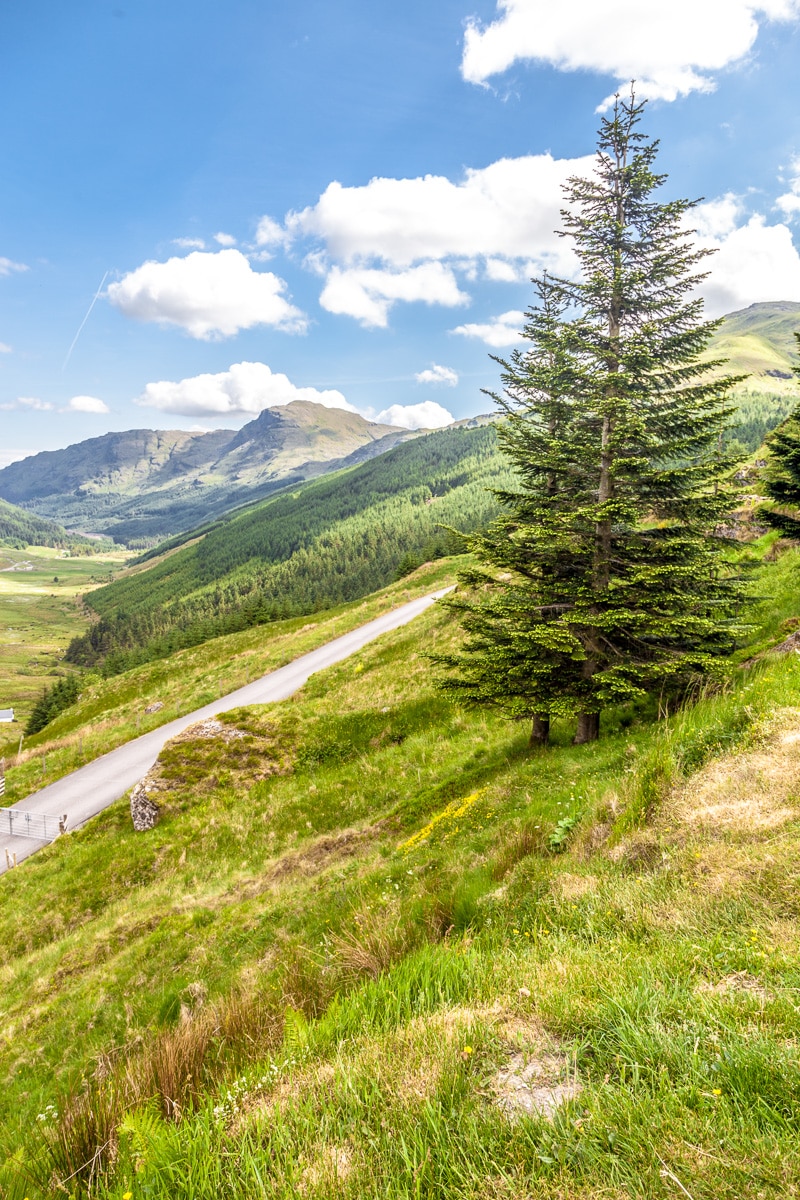 Departing Inveraray, we headed up and over the mountain pass that is the  watershed between Loch Lomond and Loch Long. The original road was built by soldiers as a military road in 1753, and the pass was named “Rest & Be Thankful”, as the route over is so long and steep that it was traditional for travelers to rest at the top, and be thankful for having made it.

From the pass we made our way through the valley to Loch Long, and then over to Luss on Loch Lomond, well-known from the song “The Bonnie Banks o’ Loch Lomond“.  We wandered down Pier Road  through the heart of the small village lined with charming cottages down to the shore of Loch Lomond and Luss Pier. 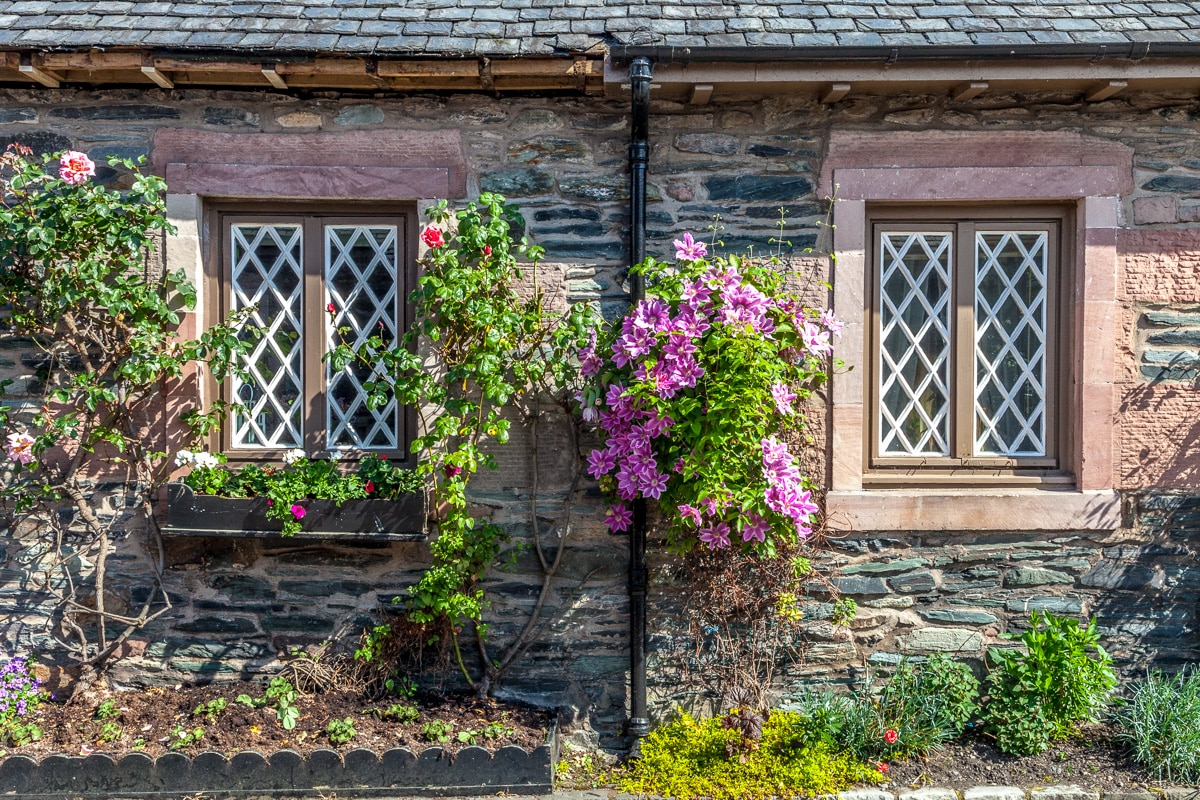 Again, extensive wandering was limited as we needed to get back on the road, but suffice it to say that both the Loch and the village warranted more time.

The return to Edinburgh was going to take about two hours, and we took a short stop beneath Stirling Castle on its rocky crag. It has a long and notable history that will be the focus of a blog post when we return for a longer visit